What a nice way to end the game there, Addison Russell.
He's got 12 RBIs so far, none of them more spectacular (so far) than the 3 he knocked in with his 9th inning dinger yesterday, giving the Cubs a nice W.
Here's hoping he'll surpass the 95 he got last year.

The Cubs have come from behind in 3 of their 8 wins so far, and it's awesome and exciting to watch.
But I sure would like to see less of that, because usually it means the starter gave up some early runs.
As a fan, Kyle Hendricks is alot more fun to watch when he's missing bats and that hasn't been happening yet.
The expectations for him skyrocketed last year, and I really REALLY hope he has an awesome year this year so nobody can say "2016 was a fluke".
You ever have a conversation with yourself about.. who's your fav Cub?
I know.
I said "conversation" on purpose because that question never ends.

But I always tend to gravitate towards the guys who aren't Athletic God's Gifts.
That's not to say that Hendricks isn't an incredible athlete, but he doesn't have the power tools other do.
He won the last game of the NLCS and started the last game of the WS.
What super hero would that make him?
Isn't there a guy who can like, kill a bad guy by throwing a playing card or something?
Name should be Deadly Aim.
Anyway, I really want that Hendricks back soon - his Spring was amazing, and I'm sure that's coming.

Okay gotta get going but... after the sweepy Pittsburgh hiccup, these handy come from behinders vs the Brewers sure make life alot more smiley.

Cubs swept by Pirates, so here's a painting of David Ross. 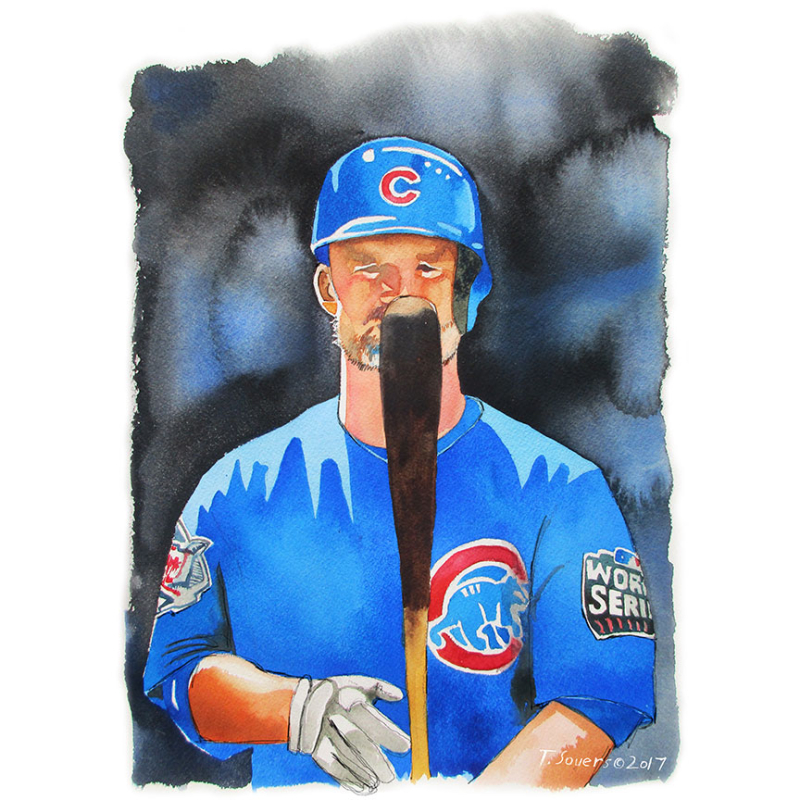 Not a lot of inspiration for painting over the weekend, so here's a painting of Dave Ross just before getting the homer in Game 7, the last hit of his career.

So...Cubs got swept.
Boo hoo.
Anxiety.
The bullpen sucks.
WHAT ARE WE GONNA DO?
I can't believe that the same people who are... not pushing any panic buttons or anything but speaking in a nervous manner, those same people are scoffing at the success of the Reds - like NO WAY are they any good.
Do you believe the Cardinals are the worst team in baseball?
Neither do I (but how awesome is their start!?)
We just need to get a little more baseball under our belts and then look around.

Man, how about Lester and Contreras as batterymates?
Young Willson's arm is a total freak show of strength, and he's out to help protect the veteran, and it's gorgeous to watch.
Yesterday's game was perfect if only it had ended after the 7th.
Today the Brewers come to town, and I predict more hitting from the home team. 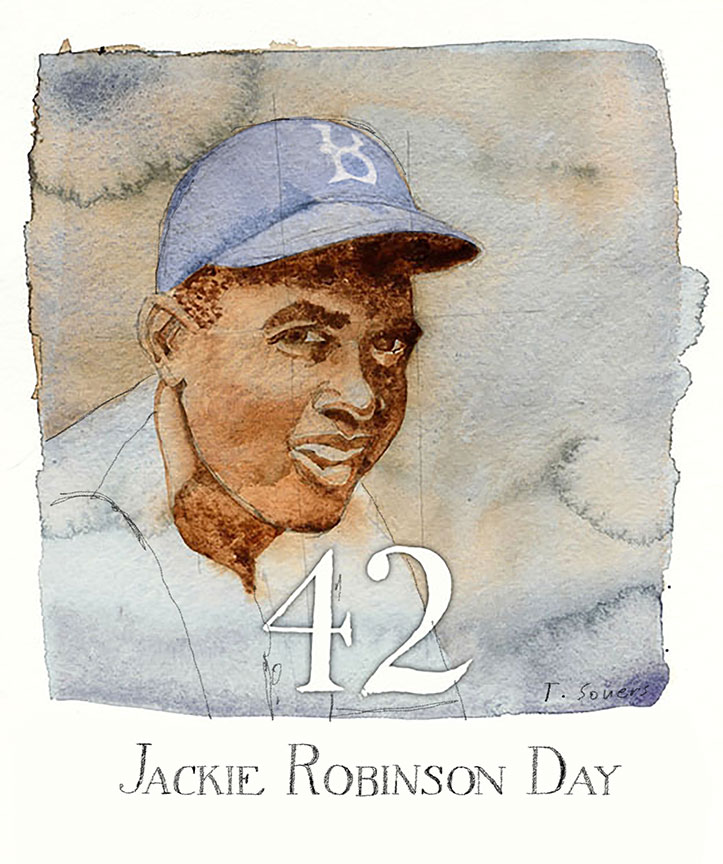 Everywhere today you'll see all the players wearing #42 to pay tribute to Jackie Robinson, the first African American baseball player to break the color barrier and suit up for a Major League Baseball team.
Today if you're at Wrigley (or any ballpark), or watching on tv, you'll be reminded of him.
If you have children or are watching with someone who's unaware, they'll ask why everyone's wearing #42.
And you tell the story.
It keeps him alive, and that's the point.

Today the Cubs will suit up against the Pirates at Wrigley Field at 1:20.
Jake Arrieta vs Tyler Glasnow.
Be sure to turn it on and think about Jackie Robinson.

Cubs and Ceremonies. I could get used to this. 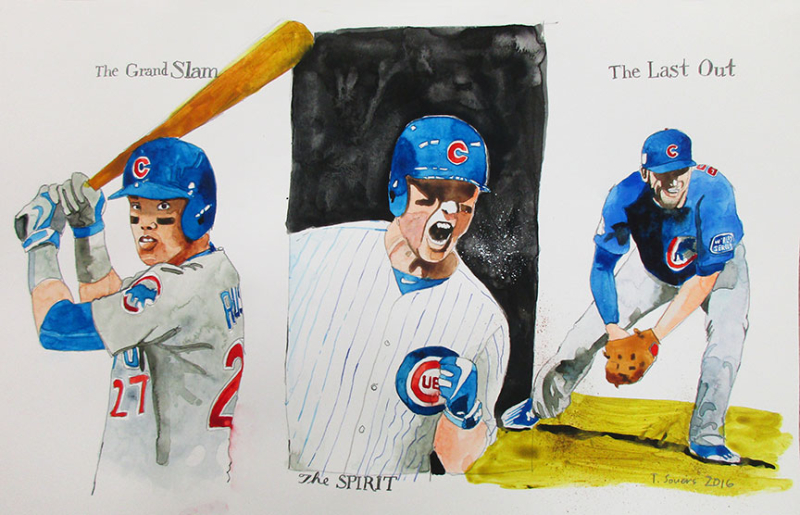 Last Thanksgiving we went out to visit my parents and I hadn't seen my dad since the Cubs played the Dodgers in the NLCS.
And right up in the first hug hello was all the emotion we didn't get to be in the same room for when the Cubs won it all.
And he said the only thing he wanted for Christmas was paintings like the ones I'd done of Russell, Bryant and Rizzo.
Now, their house isn't small but it's also not huge with tons of wall space, so I decided to do them all on one painting.
Took me awhile, but it turned out kinda cool.
(Dad or Liane if you read this you still have to act kind of surprised.) 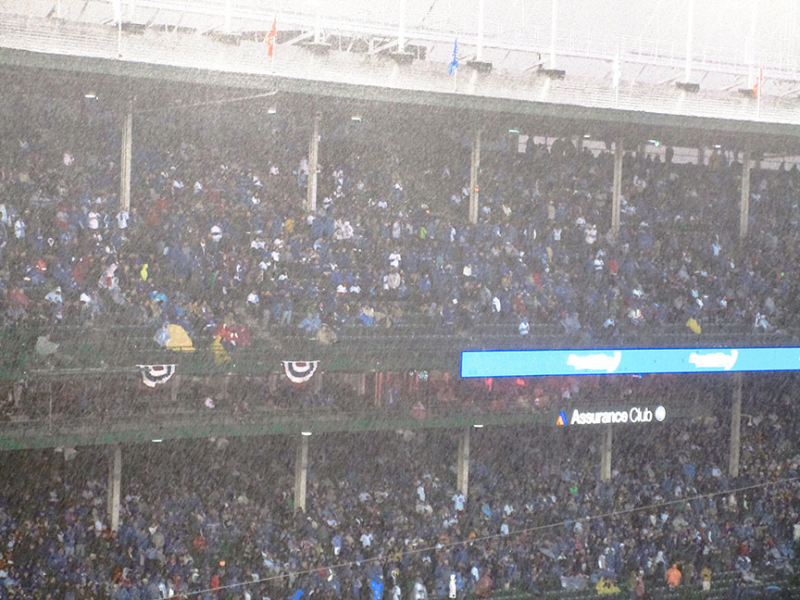 and the temperature dropped, 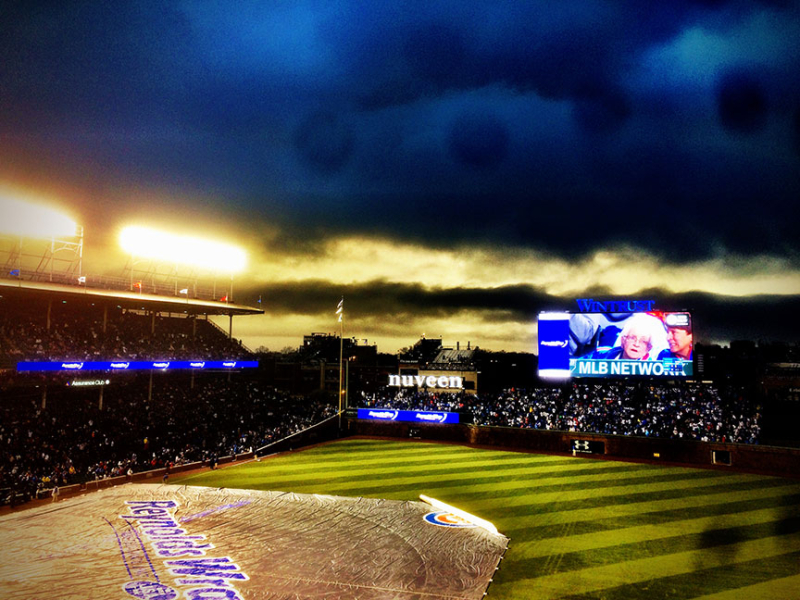 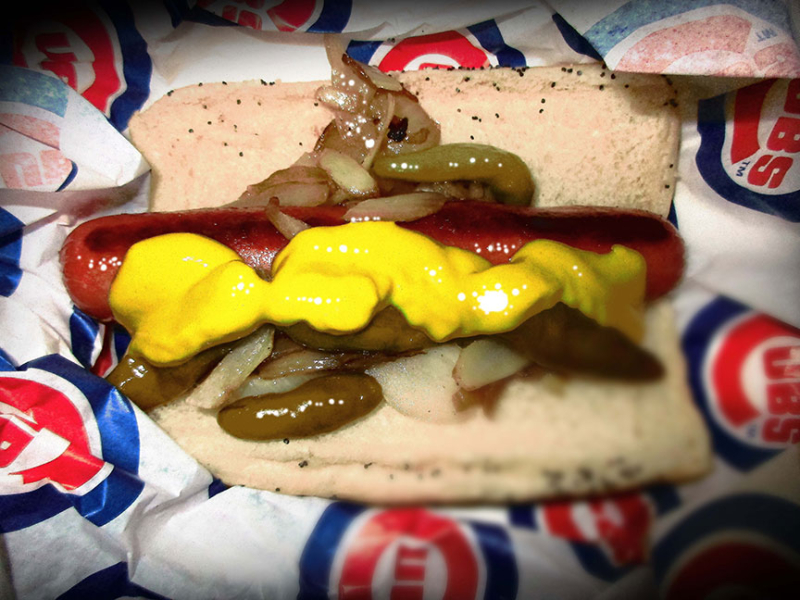 they finally did the banner-raising ceremony.
It was extra cool because they did it just like Joe said to the team... take it in.
Soak it up, this doesn't happen very often.
They sauntered across the field, 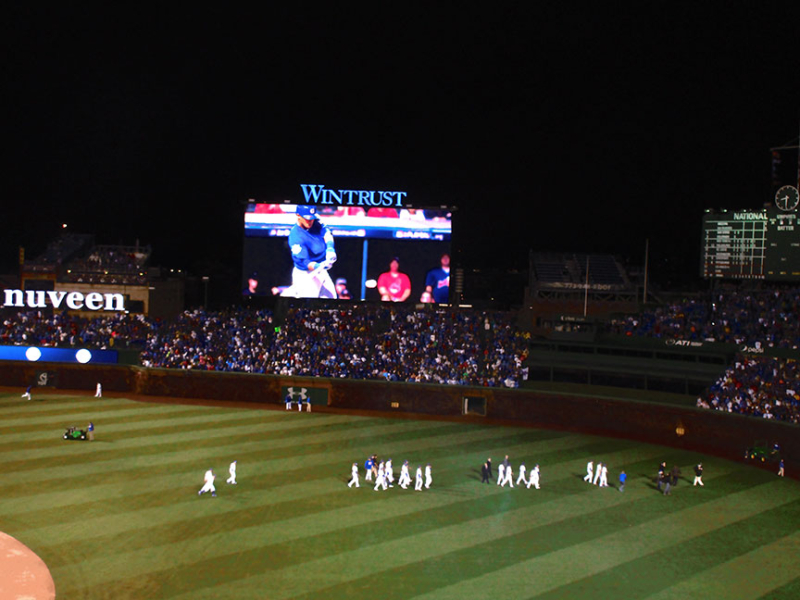 then behind that doorway there were a couple guys waiting to raise the banners: Ryno, Fergie, Billy Williams, and then the current guys led by Anthony Rizzo.
I was a guest of some friends at Optimus, and it was easy to hide tears in that freaking freezing wind - nobody saw.

Then, they walked back across the field led by Rizzo carrying the World Series Trophy (the Commissioner's Trophy), and handed it off to Tom Ricketts. 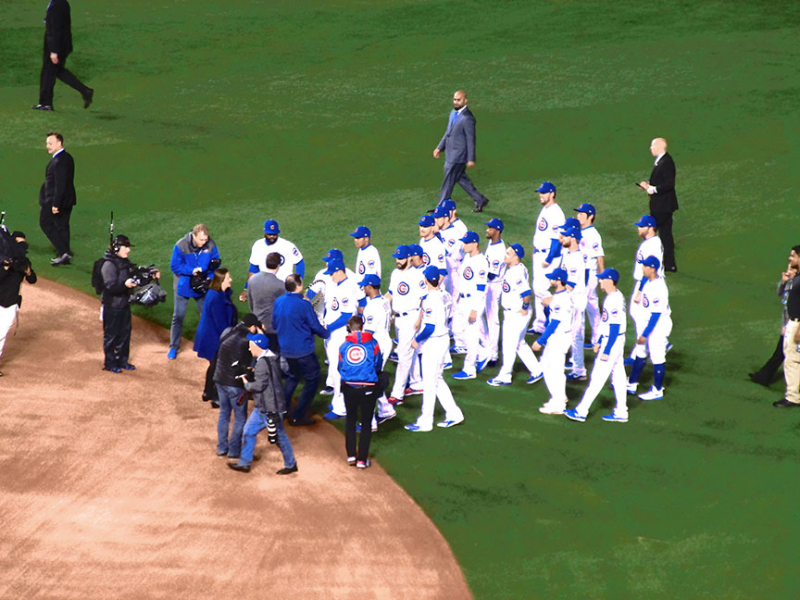 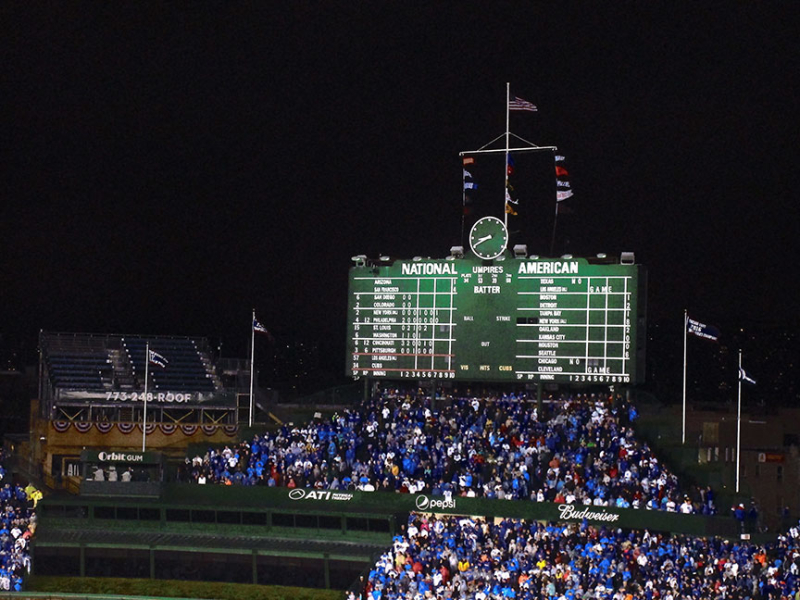 Then baseball happened, and my last photo of the night was Kris Bryant hitting a double and knocking in Kyle Schwarber.
Not gonna beat that one - I just happened to pick up the camera right at the right moment. 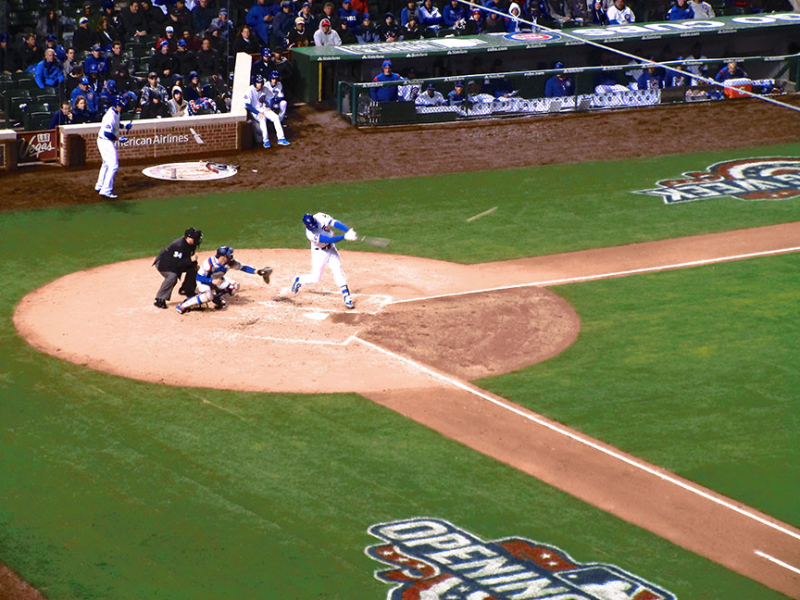 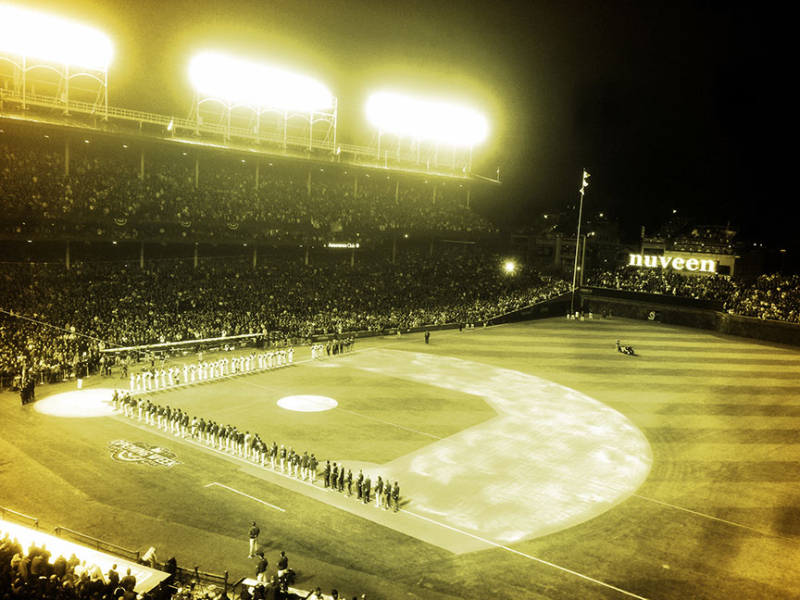 Anyway, Cubs 3 Dodgers 2.
The boys are back in town, and man is it ever a party.
Which continues tonight with the ring ceremony (I'd HATE to be on the Dodgers).
And one guy I'm not sure I ever gave enough credit to, but surely he'll be getting a ring special delivered... Aroldis Chapman.
You can be angry about the stuff he said on his way to NY, but they aren't having this ceremony tonight without his contributions. 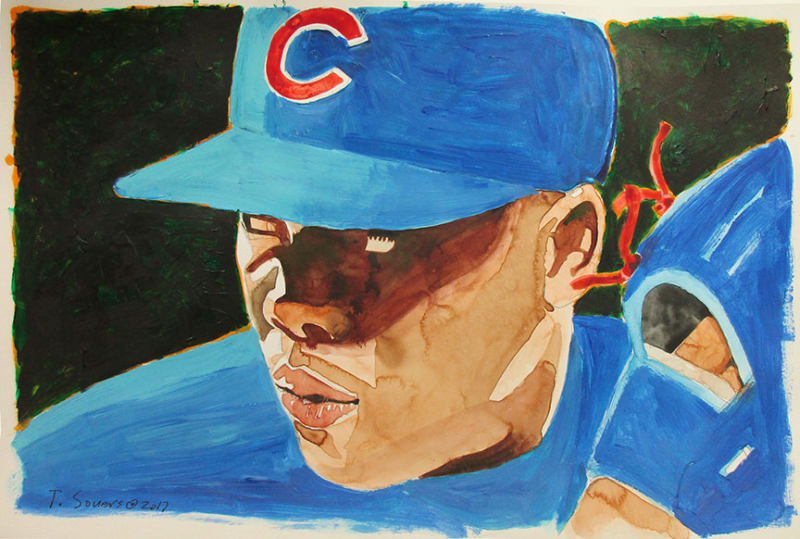 It's the 2017 Cubs Home Opener, and some things to be thankful for.

Hang on hang on... I'm just gonna take a minute to think and... man, that's a lot of good Cubs stuff to be thankful for.
And there will be more to come.
They say the Home Opener festivities are to begin around 6:15 with the raising of the 2016 World Championship banner.
Luckily, there's no roof at Wrigley or it would be pretty empty... but this banner represents everything you and I have hoped for in our lifetimes, baseball-wise.
That's pretty significant, since most of you place baseball kinda way up there in the world of things in your life.
And along with the festivities we'll see a baseball game featuring the the Los Angeles Dodgers.
The last time we saw them, Kyle Hendricks out-everythinged Clayton Kershaw as the Cubs won the NL title in a 5 to nothin' game 6.
So many past Home Openers have been just a big party.
And that's great, and for sure tomorrow's will be a bigger one than ever.
But being a home opener vet, I can tell you that the actual baseball game being an important part of the Home Opener is a relatively new concept.
And just so freaking exciting.

The Cubs come home after going 4-2 on the road to open the season, and they handily beat the Brewers on Sunday with Jake Arrieta going 7 innings and giving up 3 runs while Kyle Schwarber and Ben Zobrist hit homers.
Cubs 7 Brewers 4.
The Dodgers fly in from a victory in Denver with a 4-3 record, and they've scored 10 more runs than the Cubs with 40.

First.
I'm sure you saw the sick angle of Javier Baez's neck when he ran into Jason Heyward on Friday.
Do you have any idea how many "hurl" pieces of art I've made over the years?
I just couldn't do another one after that one, sorry.
But damn, that collision literally made me run out the house as far away from the tv as possible.
Deep, deep breaths.
When I came back, Len said it was a bruise?
Do you have any idea how big the bullet was that we just dodged?
That could have been horrible.

Okay anyway no harm no hurl.

I had to pick up my son + other college students at the international terminal 5 at O'Hare last night.
Flight landing as I was driving and listening to the game.
Did you know that terminal 5 is a whole other building, away from the others?
It's true.
It's the building with all the flags of different countries in front of it, the one I've passed a million times and always thought somebody just put up a buncha flags for no real reason except they look cool.
No Tim you idiot, that's the International Terminal.
So that plus me forgetting that when picking up people arriving from another country, one must tag on an extra hour and a half to allow the arriving party time to go through customs.
I stood in an airport lobby for EVER trying to listen to my At Bat radio, which dropped off every 3 minutes or so.
Which caused me to miss most of the 17 Cub hits and 11 Cub runs.
Luckily though, I love my son so... there were no injuries in the making of this post.

Really, last night was a big sigh of relief as everyone got a hit and there are no more hit-monkeys on anyone's bats, er.. backs.
I did hear the Bryant double and had to, you know.. look around, laugh, point to my phone and say, "Cubs" because I'd just yelled in an airport and that makes people nervous.
Kyle Hendricks wasn't so Hendricks-like, but I just crack up when I think about how spoiled I am with Cub Pitching Excellence.
5 hits, 4 runs, 6 innings.
It wasn't that long ago that those numbers would be the highlight of a week.
Anyway, not worrying about him.

One more Brewer game today and then it's the Home Opener.
With Championship Banner raising and real baseball to watch.
This one... won't be like any other home opener you or I have ever seen.
I hear they start at 6:15 with pre-game stuff Monday, and would expect this entire homestand to be loaded with extra-curricular, extra-cool Cubs stuff.