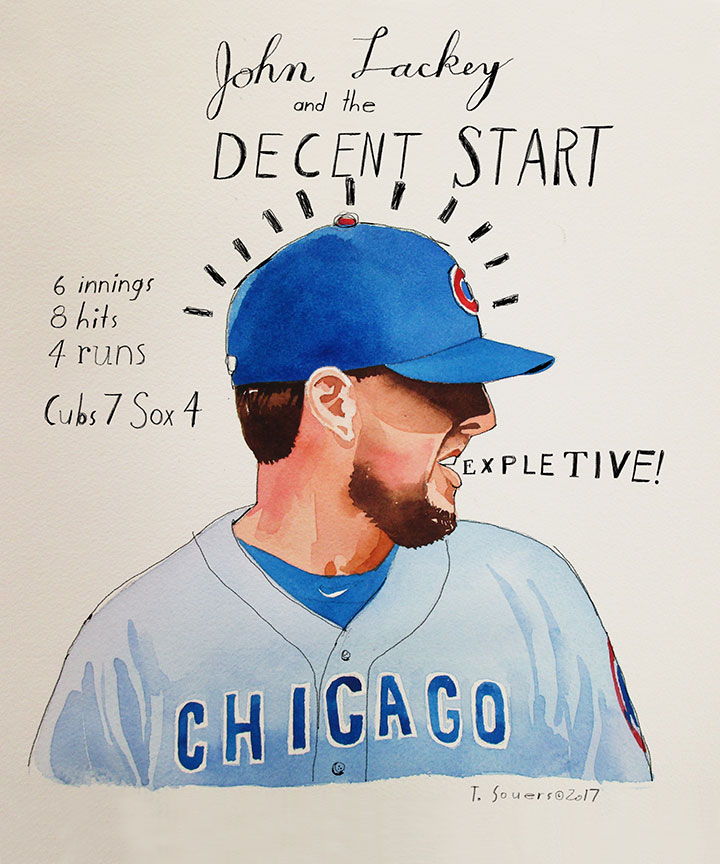 I was listening to the BP Wrigleycast podcast earlier this week and he subject of John Lackey came up.
He's an innings guy now.
38.
Multiple WS rings.
If you watched yesterday, you saw a decent start from him.
6 innings, 8 hits, 4 runs, a couple expletive explosions... this is how he'll finish up.
And it's not bad, either - the other day Jon Lester was talking about his hope that he can keep going, like his buddy Lackey.
And if Lackey can do this every 5 days or so this year, he'll meet expectations.
I think the worst thing that could happen with Cub pitching this season is (and they were talking about this at BP) renting a pitcher at season's end by giving up, say, Ian Happ and Jeimer Candelario.
They were talking about Johnny Cueto, who can opt out of his contract this year...

Well, getting ahead of myself there, but that's dangling isn't it?

So glad to see Albert Almora with the solid single to left in the 3rd yesterday.
Such a mental thing a knuckleball guy like Stephen Wright has over batters until somebody smacks one.
Then in the 4th Kris Bryant doubled and Anthony Rizzo knocked one over the bullpen in right.
Not that this game was no sweat, but you felt that everything was pretty much where you wanted it.

And then in the 7th Miguel Montero creams one, Jay doubles and Wright's gone.
Biggest WOOO of the day came next, with Kyle Schwarber's dink in between short and center, and Jay scores.
Beautiful, and Schwarber just needed to contribute - maybe tonight he'll come all the way outta that funk.

Cubs win 7-4.
Wade Davis jumped on the NL leaderboard with his 6th save.
Nice. 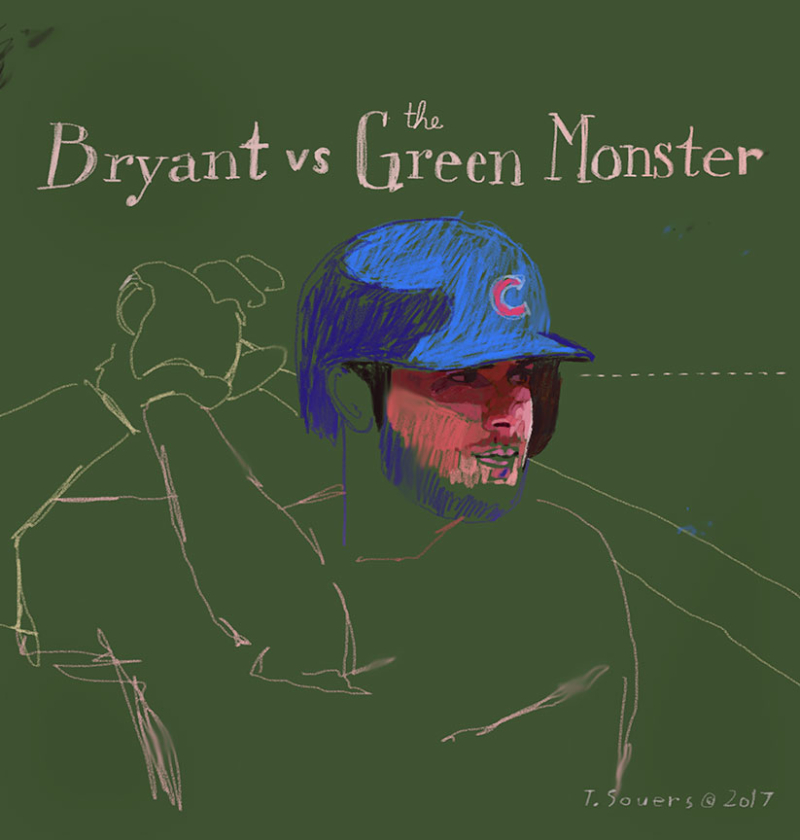 The last time the Cubs played Boston, Darwin Barney went 4 for 5.
Mike Olt, Justin Ruggiano, Welington Castillo, and Nate Schierholtz all hit homers.
The Cubs won 16-9.
I looked that up, of course, because I can't remember it at all.
2014 - not a great year.
Anyway, in the box it says only Ruggiano hit one out to left, so he musta knocked it over that big green monster.

It's gotta be just human nature, right?
The want/need to hit one over that thing?
I promise you all the Cubs are thinking about it.
I can't stop.
Wouldn't you love to see a Bryant Bomb go waaay over it?

Okay the Bears.
All their eggs in one basket when the team has millions of needs everywhere.
WHAT ABOUT THE D?
I went to bed so mad I couldn't sleep.
But I woke up this morning thinking this: I have wanted them to blow that team up and start over since Urlacher left.
And maybe that's what they're doing.
It's a looong discussion.
But I'm gonna try to give it a chance.

Last thought: is it weird that with Cub catchers, the "l" left "Welington" and went over to "Willson"?

If you haven't seen it for real, just google "Chris Coghlan".
Chris Coghlan leaps all the way over Yadier Molina to score a run, and the Blue Jays beat the Cards in the Battle of the Birds, 6-5.
Hilarious.
I wish I could remember who the first wide receiver was who did this to a db on national tv.
I do remember Tony Campana trying something similar, can't remember if he was safe or not.

More importantly, Kyle Hendricks did exactly what we hoped with A) a quality start and B) actually winning the game 1-nothin'.
Over Gerrit Cole, who.. when I saw him earlier this year he looked kinda not so effective, but last night he was dealing too.
Hendricks looked like last year's Hendricks, so maybe he just had that "dead arm" thing, although he says he's not "in the zone" like he was last year.
Yet.

So Cubs on top by a couple games over .500 Milwaukee, and Jon Lester with the chance to sweep the Bucs tonight!
Go Cubs.

Jason Heyward's got 3 dingers in the last 4 days. 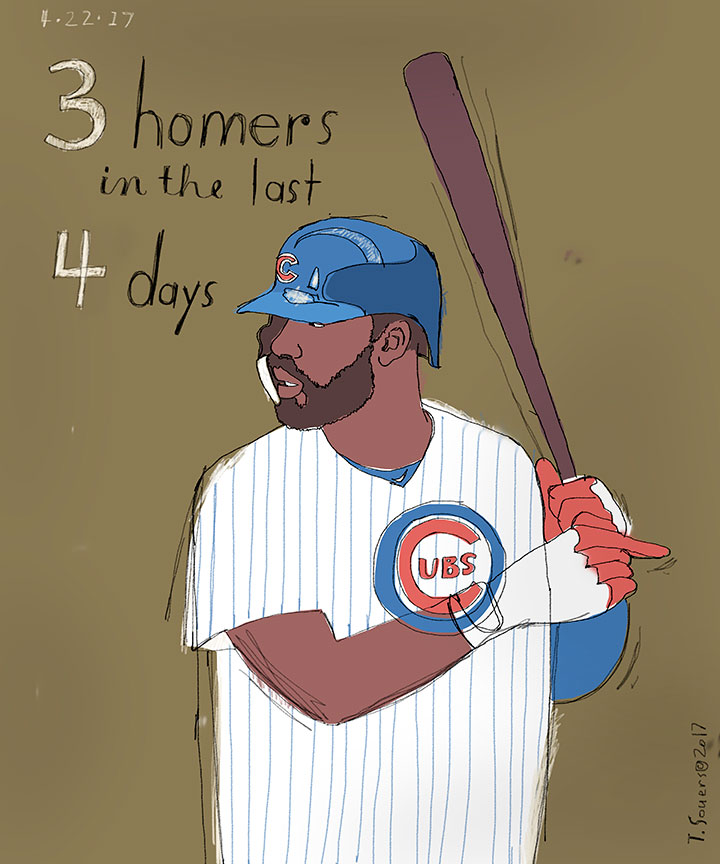 It's some kind of testament to this new kind of Cubs team in this new kind of Cubs era that I actually felt bad for a Pittsburgh Pirate.
Their starter, that Kuhl guy, just got ruined by the Cub Bats last night.
Took him 57 pitches to get 5 outs, and in the meantime give up 8 hits, 4 walks and 9 runs.
But the part I feel reeeeallly good about is Jason Heyward getting tons of solid contact lately, with some of it resulting in home runs.
It was the WORST in spring when... the guy works all winter trying to improve his stroke, it doesn't appear to be that different and then nothing much happens and everybody starts whispering.
So it's the BEST now that he's smackin' it around, the homer last night was just glorious, and everybody can shut up.

Lots of Cubs got in the act with 17 total hits, and the Cubs win a laugher 14-3.
Even though there was lots of struggling, Brett Anderson gets the win and a much needed quality start so he can check into this hotel tonight: The Cubs currently reside tied for 2nd to last in the NL with just 7, while the Nats lead in that category with 17.
The Cubs led everybody last year with 100 - they had so many quality starts I think I made fun of it in a drawing some time.
But man, I could really use one of those contagious dominant performances from a starter and get that quality thing going.
How about Kyle Hendricks gets that going tonight vs Gerrit Cole.
Sound good?
Okay see you at 6:05.

We were all thinking it, but Len Kasper coined it: The Comeback Cubs. 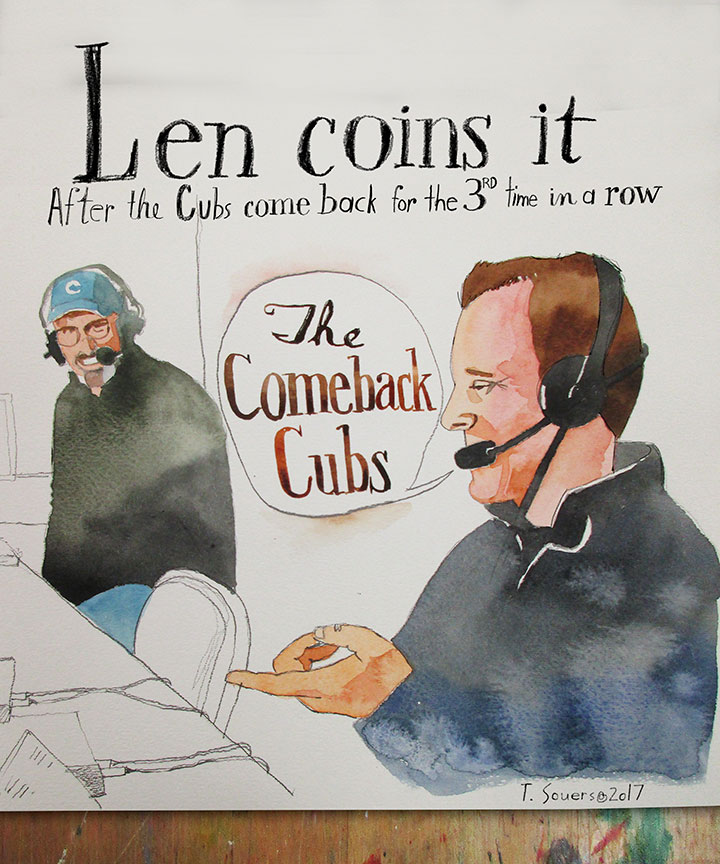 I hope this name doesn't stick just because it usually means there was a breakdown in pitching, but when the Cubs came back from being down 3 runs with 2 outs in the top of the 10th, that's just something you don't see every day.
Lester got dinged up pretty good in his 5.2 innings, giving up 9 hits, 2 walks and 5 runs.
And the Cub bats were hitting solo with a shots from Heyward and Baez.
It got better as the game went along, but that last oomph never came - they left runners on 2nd and 3rd in the 6th, 7th and 8th.
Ow.
But then the 9th.
Just. So. Satisfying.
Montero singles, Almora strikes out, then a HUGE at bat by Kyle Schwarber.
The ump calls a strike that was pretty far outside.
Then the next one is WAY off the plate inside, and I've never seen this but Schwarber really really gave the ump a hard time which was awesome, and Len JD were all, "THOSE BOTH CAN'T BE STRIKES MAN".
Call 'em in or call 'em out but don't call 'em both.
And then a foul on a pitch down the middle.
And then a pitch up above the catcher's head, I have to think it was a fastball - the high heat that nobody can hit, and Shwarber freaking pulls it.
He's such an animal.
A double and now for the 4th inning in a row there are Cubs at 2nd and 3rd.
It's gotta happen, right?
Kris Bryant lines out to short.
And then Rizzo comes in and yeah, Reds right fielder Scott Schebler got to take about 5 steps and juuuust get to the warning track, but Rizzo's liner was soooo smoked all Schebler could do was play it off a Budweiser sign.
3-run homer.
Such joy.
Then in the top of the 11th with Almora on 3rd, Bryant hit a fly ball that's not deep enou... WAIT! 3rd base coach Gary Jones sends Almora, the throw is up the line and Almora is safe.
Wade Davis came in and looked like Wade freaking Davis, striking out 2 including the last out.
Did you see his last strike? Wow.
Cubs win.
Len says, "The Comeback Cubs", and now it's officially a thing.
That's 3 come-from-behinders in a row.
Next game at noon.
What an awesome Saturday.
Go Cubs.

So much fun, this extra stuff (this time from TIME) that comes with winning a World Series for the Chicago Cubs and that other American League team.
Where would we be without Theo Epstein?
Looking up, as we used to be, all the time.
Anyway, hilarious, and here's the real list put out by TIME.

Tonight it's Jon Lester in Cincinnati vs Tim Adleman, who's tossed 4 innings so far this year, given up a couple hits and a run.
Mr. Lester, on the other hand, has been kind of masterful giving up just 2 runs over 18 innings which so far = zeero wins but... how about tonight?

One last thing then I gotta run.
Saw an article yesterday's Trib (I can't find it online, sorry) that there's gonna be a total solar eclipse (That's the kind where the moon goes in front of the sun and it gets dark and eerie) on August 21st.
Happening at 1:20 IN THE AFTERNOON!
(Okay it said 1:21 but whatever.)
Can you imagine being at Wrigley Field and the moon blocks out the sun?
Well, you'll have to keep imagining because that's an off day for out fav team.
Unless there's some kind of make-up game happening that day.
Crazy, man.