Are the Bears any closer to the end of the rainbow? 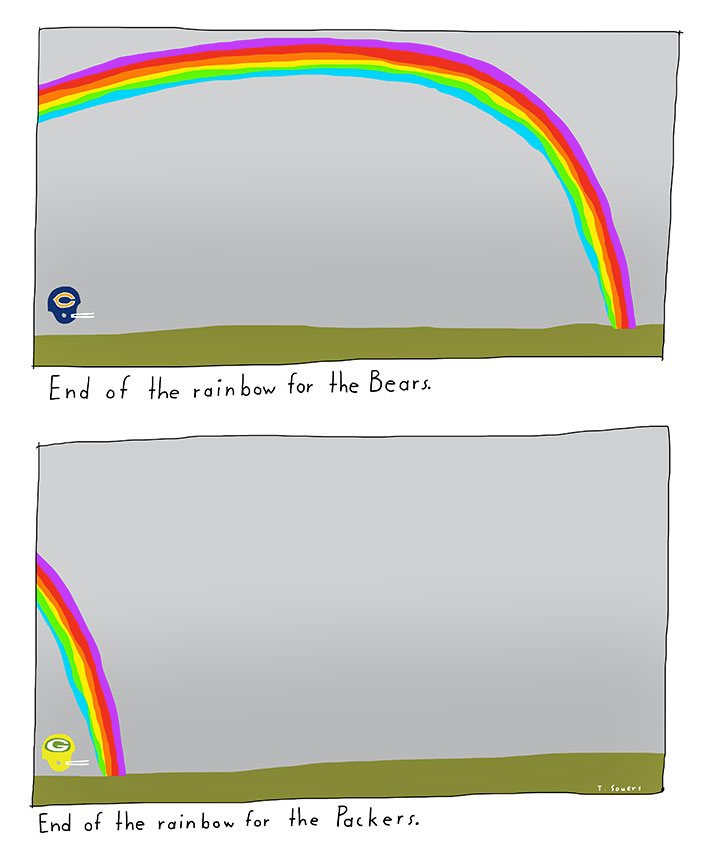 Are the Bears any closer?
I don't think so.
While I never actually disliked Jay Cutler, I couldn't stand Jerry Angelo, and Jay was the last connection to that guy's reign of horrible as the Bears GM.
So I'm glad that's over.
And now they gave a guaranteed 3 years/$45 million contract to a Tampa Bay backup qb who hasn't thrown but 11 actual in-game passes since 2015.

Of course I hope that Bear management has made a brilliant decision.
I just ain't gonna jump for joy until...

Honestly, I just wish the Bears would look at what Theo did with the Cubs and say out loud, "We're gonna rebuild for awhile."
Start with the defense.
Yeah, it's a way different game than baseball, but after the Cubs experience I think the city could take it.
What I can't take is John Fox saying how close they are.

Even a dope like me isn't dumb enough to believe that.

If Schwarber leads off, nothing will change about his approach. 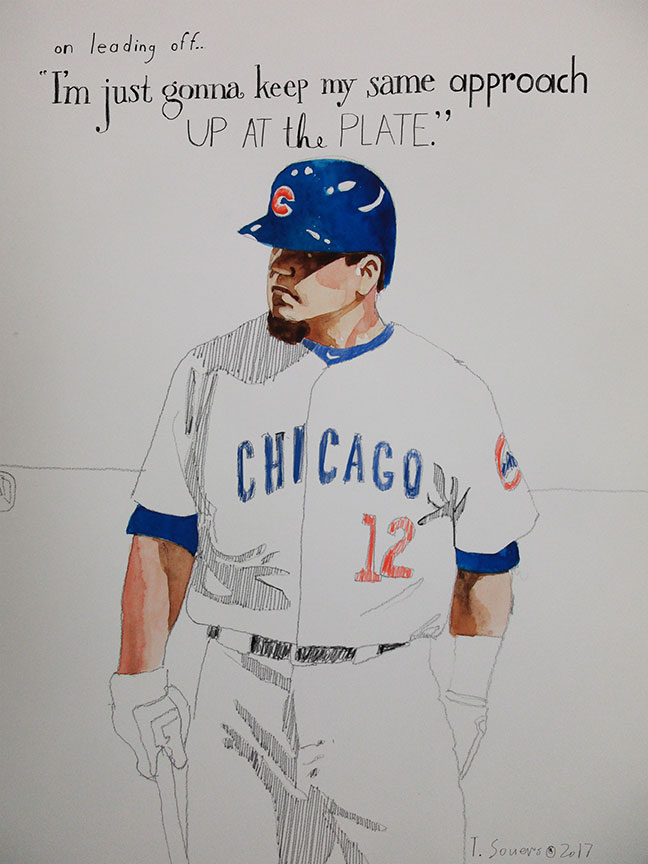 Of all the stuff Kyle Schwarber said in this funny little clip on Cubs.com, this quote was almost the funniest.
I mean... pretty sure you weren't thinking he'd say, "And I'm going to become the next Rod Carew - hit 'em where they ain't, man. Then run like the wind..."
But isn't that a great 30 seconds of video?
Seriously, it hasn't even been a year yet, and he's loose and laughing and ready to go.
You have to think that sense of humor and outlook he's got has as much to do with his incredible recovery as his determination and work ethic.
What a stud.
Anyway, can't wait to see him 4 Sundays from now in St. Louis stepping up to the plate for that first pitch of the Cubs season.
______

Remember we put a hundred bucks on the Cubs to win the Series last year, as a gift to my Dad?
So the ticket was in a frame in his house, and after the series my brother took it to his house in Hermosa Beach, and this last weekend rode his motorcycle to Vegas to collect.
Just $700, but that ticket stub is priceless and will go back in the frame.
Anyway, he texted me Sunday that he's riding back.
About an hour later he texts again: too windy, had to turn back.
He doesn't have a fat bike, and even if he did wind sucks if you're riding a bike (I guess - I've never done it).
So I think it's that same wind, coming from the West, that busted my fence yesterday.
This wind was an all-day affair, my wife sent me a video of the fence wobbling back and forth, and it let go sometime after that.
I get home, walk out back and there it is - chunks of fence blown around the yard and a busted post in the middle of all that and I thought good God, what if it blew like that with Schwarber up to bat?
That ball might come down on somebody out back of Murphy's.
Or hit the el.
I CAN'T WAIT FOR BASEBALL.

Oh the drama!
I got these images off the replay video.
Blew 'em up and tried to make the framing the same.
But am I crazy or is there a grown man with a glove on (backwards K shirt) who puts his glove right in some little kid's face?
A kid with a glove, too.
Shame on you, grown man with the glove.
(Nice job, other guy standing by with the quick hands!)
But otherwise, Kris Bryant hitting a grand salami in spring ball just made it feel so much closer to summer, didn't it?
In fact, there wasn't much to dislike about yesterday's practice game with the Dodgers at all.
Klye Hendricks looked just like Kyle Hendricks!
I can't stop thinking, as I watch Cub pitchers throwing impressive breaking stuff, how Matt Garza first came to our favorite team one Spring, looked like crap and blamed it on the dry air.
Kyle Schwarber looked like... you don't wanna throw a strike? I ain't swinging.
Perhaps you haven't heard, Dodger pitcher, that I'm going to be the lead off hitter in about a month and I'LL TAKE YOUR FREE BASES THANK YOU.
Carl Edwards Jr. comes in for an inning and strikes out 3.
HE'S SO GOOD!
Jeimer Candelario subbing at first for stiff-backed Anthony Rizzo goes 3 for 3 with a double, a triple and 3 runs scored.
That guy was so impressive last spring, too.
Jason Heyward is still hitless but so is Ben Zobrist and Miguel Montero.
Who cares.
Nothing can bum me out in these games except the pitch in on the wrist thrown by wild young pitchers trying to impress.
Addison Russell got nailed in the arm yesterday. Mini hurl. 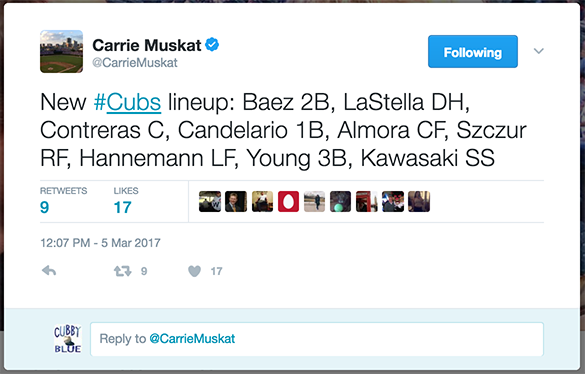 Here's today's lineup brought to you by Carrie Muskat.
Besides Kawasaki (starting at SS because Russell's a little sore) and LaStella I think they're fielding a team of people who would all get carded at Buffalo Wild Wings.
Awesome.
Okay that's all I got.

Balancing life and baseball as a Cub Fan. 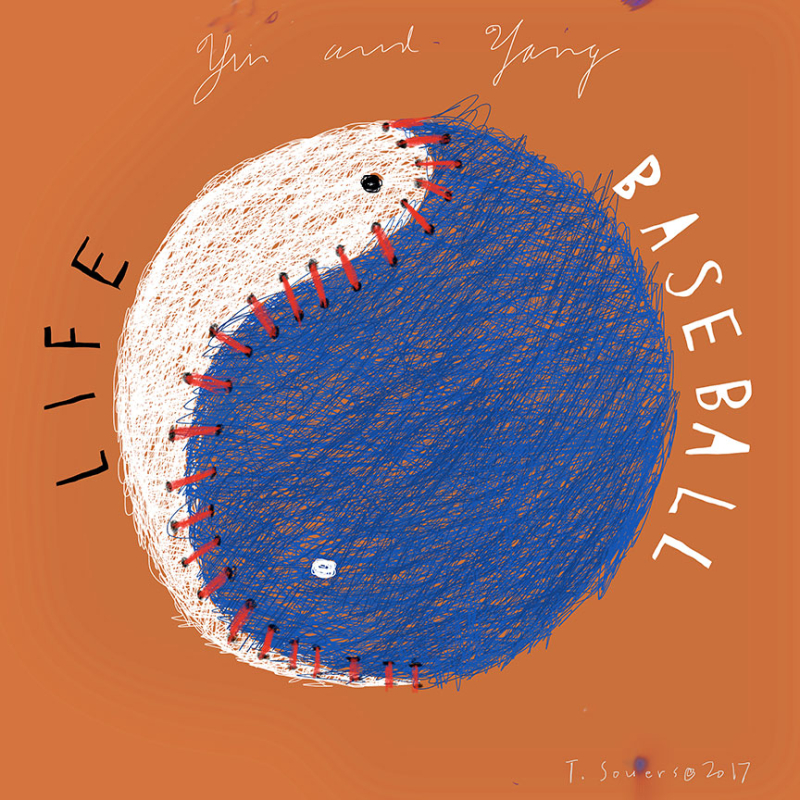 In about a month, the defending World Champion Chicago Cubs are gonna take the field against the St. Louis Cardinals and all sense of balance will go out the window.
April 2, 2017 at 7:35 PM Central time I imagine it'll be Carlos Martinez throwing a fastball to Kyle Schwarber.
Cubs/Cardinals?
Schwarber up to bat?
Oh Em Gee.
I mean, it's already happening with balance leaning towards our favorite game.
My stupidstitions are already coming back - I read about David Price's elbow and now I can't step on a crack.
Those odd little conversations in elevators or with the cashier at the grocery store because you're wearing a Cubs hat.
People are putting their little car window W flags out.
Maybe a thousand tweets all saying what we already knew about Jon Lester (he's going to be the opening day starter in case you didn't hear).

Tomorrow (Saturday), the Cubs will be playing the Dodgers on WGN at 2:05 Chicago Time.
Which means about 1:58 I'll lose my balance.
Standing in front of the couch, all my body weight will shift to my ass end as I say goodbye Yin and hello Cubs.

I expect you'll do the same.

PS: Have you been turning on the Hawks lately? Hat tricks are sort of normal. I've seen 3 just recently. Jonathan Toews and Patrick Kane are playing at a level that your stereo and my stereo can't go to. The other night against the Blues, the Hawks appeared to have so much speed and intensity that it was impossible to look away for even a moment because you'll miss something in that red blur. Anyway if you're not watching, you're missing something special.
Those guys are good.
Nothing could be cooler than two World Champions in our city.

All Cub Fans are in heaven since they won the Series. 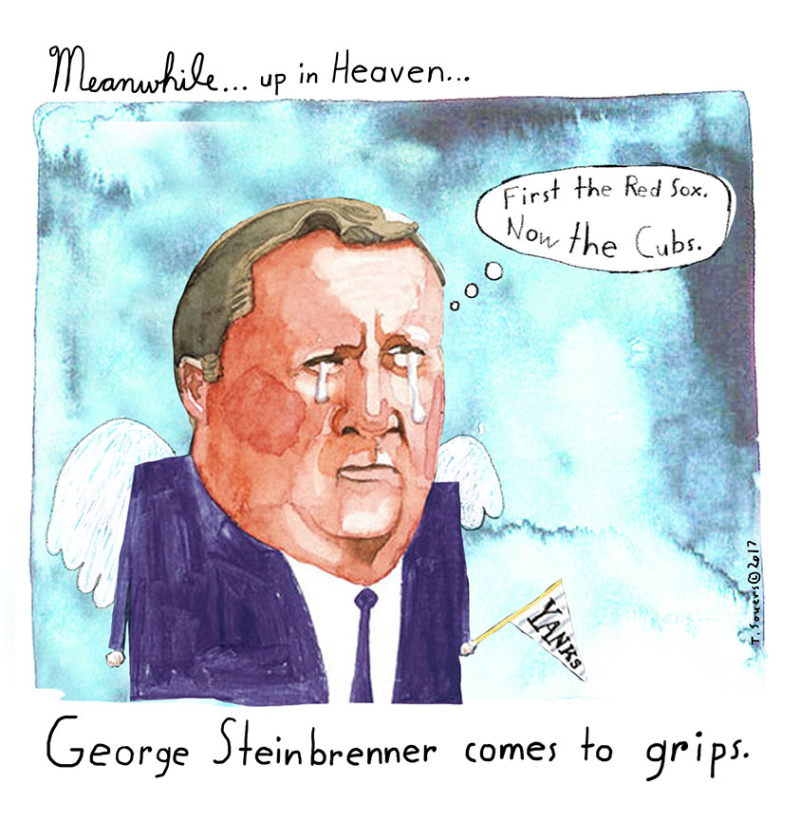 The other morning, this actually happened.
Up in the toniest part of Heaven, George Steinbrenner's wife Joan walked out onto the veranda, where George, Jimmie Foxx, Stan Musial, and Billy Martin were playing cards.
(Billy and George have a "deal" with God - for both of them to stay up here, they have to be friends.)
"George darling, I have a matter to discuss privately if you don't mind."
She looked serious.
"Bottoms up, guys." said George.
The guys all finished their drinks and shuffled out.
No one was disappointed... surely there would be cards over at Babe's place.

Once they'd gone, Joan began.
"You are aware that Chicago... (deep sigh)... the... Cubs..."
"God yes, I know."
"Language, George!"
George looked at the tall privacy fence at the edge of the yard and yelled, "It's a COMPlIMENT! But sorry!"
She continued...
"Yes the Cubs. The... World Champion Cubs..."
"I said I KNOW!" George interrupted, "It's apparently been freezing downstairs."
Then Elizabeth said, "The owners from way back, the Wrigley's, have... moved. Here. In fact, we're neighbors."
'WHAT?" (George spit up a little scotch, but Joan pretended not to notice.)
"It's true. And not just William. Phillip K. and William III are living in the coachhouse."
"But... I thought all those Cubs people lived in Pergatroy?"
Shaking her head, Joan explained that as soon as the Cubs won the World Series, all Cub Fans were "in heaven".
George asked, "Even owners from 1916?"
"Yes, and it's only polite to welcome them so, now we're... we're going to have to ask them over for dinner."
"DAMMIT!"
"LANGUAGE!"
George said, "But if we invite the Wrigley's over... don't tell me, we'll..."
"Also invite Ernie Banks, Ron Santo, Mordecai Brown, Tinker, Evers, Chance... even that loudmouth Durocher," finished Joan.
George rattled his ice.
"Losers! In our house. Oh the humanity! I mean spirit-ity. What in the world shall we serve? Deep dish pizza?"
"Of course not, dear," Joan said, "We'll serve the latest from the Windy City... Bison sausages."
"Squatters! They've ruined the hot dog!"
"Well... get used to it. Because now they're here for good."

Meanwhile on Earth, it really is different, isn't it?
Cubs on Saturday Night Live, at the White House, at the Grammys.
Dave Ross on "Dancing with the Stars".
New Cub Fan celebs besides Jim Belushi and Bill Murray.
There are people wearing Cub hats all. over. the. country.

The Cubs themselves - some are people around 25 years old, and they'll now be playing in their 2nd or 3rd year of Big League Ball.
Newly experienced, all of them should be getting better at what they do.
The reigning MVP, Kris Bryant, might be better than he was last year.
What if Javy Baez really, really figures something out at the plate?
Addison Russell is already going deep.
Kyle Schwarber, I do not care how experts evaluate his play in left field, there isn't another bat like that around.
Lead him off and lets see how many at bats he can get.
Willson Contreras, oh he's totally going to be put under the microscope by every team.
Will they find holes?
Maybe, but I remember Jody Davis and even Geovany Soto and... sorry dudes but there hasn't really been a Cub catcher with the upside we're seeing with Contreras.
Perhaps the most experienced of the Kid Cubs is Platinum-Glover Anthony Rizzo.
Are you kidding me?
What if he plays better than last year?
WHAT IF THEY ALL DO?

Just saying that there are a ton of kids who might keep evolving and playing at a higher and higher level and man oh man am I ever in Heaven.

ps: I can find nothing online about the life of Joan Steinbrenner. Joan, if you're still alive and you read this, I apologize deeply.