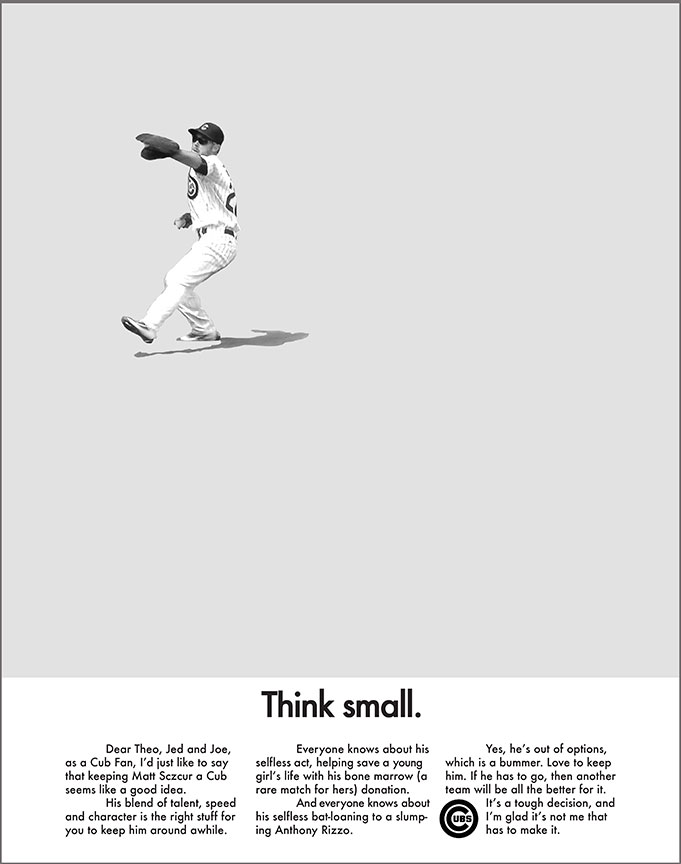 Maybe you recognize the layout and headline of one of the most famous print ads of all time.
I couldn't resist aping it for Matt Sczcur.

It appears to be between Matt and Tommy LaStella for that last spot on the roster, and Sczcur is out of options.
That makes him less attractive as an asset, but still, I just love the stuff he's made of as a player.
LaStella is a lefty bat, Sczcur a righty - that works against Sczcur as well.
LaStella had the big brain fart last year when he didn't report to the minors, but that doesn't necessarily make him a horrible guy.
Just a guy who might brain fart again.
Anyway, just another tough decision that has to be made by the Cub Front Office.
And honestly, if Sczcur goes to another team he may get a chance to start, right?
So that would be good for him.
And we all just have to get used to losing guys we become attached to as the Cubs evolve.
A harsh reality, but look at the Blackhawks.
That's how you keep in contention for championships.
And any more, that's Cub.

PS: you can tell from the ad that I'm not a copywriter, right? I just had to quickly make the columns fit so... sorry if that's not eloquent enough. And hopefully the Ad Gods can look upon this post as flattery rather than blasphemy.

Well, I guess the decision has been put off.
There's no way the Cubs would have just let Sczcur go - they have to get something back in trade.

Remember the last time we saw Albert Almora in a real baseball game? 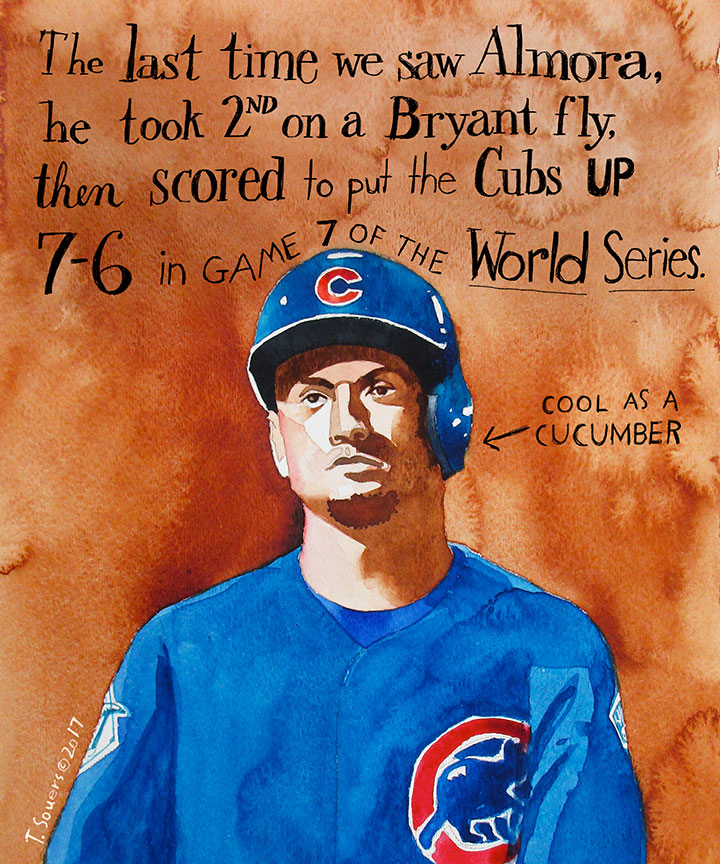 Such an amazing play by such an amazing kid.
10th inning starts with a Kyle Schwarber single.
But he's got the knee and it's game 7 of the World Series.
Remember?
You and I were freaking out and the rain delay had just ended and... hell man WE didn't know anything about a speech from Jason Heyward.
We were all on fire.
Joe Maddon elects to pinch run Albert Almora for Schwarber.
Then Kris Bryant comes up and whacks one and oh my GOD WHAT IF THIS GOES... ahhh crap. Rajai Davis catches it on the warning track.
AND ALBERT ALMORA TAGS FIRST AND TAKES SECOND BASE!
Like it was nothin'.
Like that's what you're supposed to do when an outfielder with a so-so arm is running away catching a Bryant fly ball.
Tag and take second.
When I think back on that moment I can still feel that holy mother of... he's in scoring position.
HE'S IN SCORING POSITION!
Then the intentional Rizzo walk and now it's Ben Zobrist and the hit that followed is burned in your retinas like the eclipse you always wanted to sneak a look at.
What a memory.
And I so look forward to watching young Albert take the position that is rightfully his, center field for the World Champion Chicago Cubs. 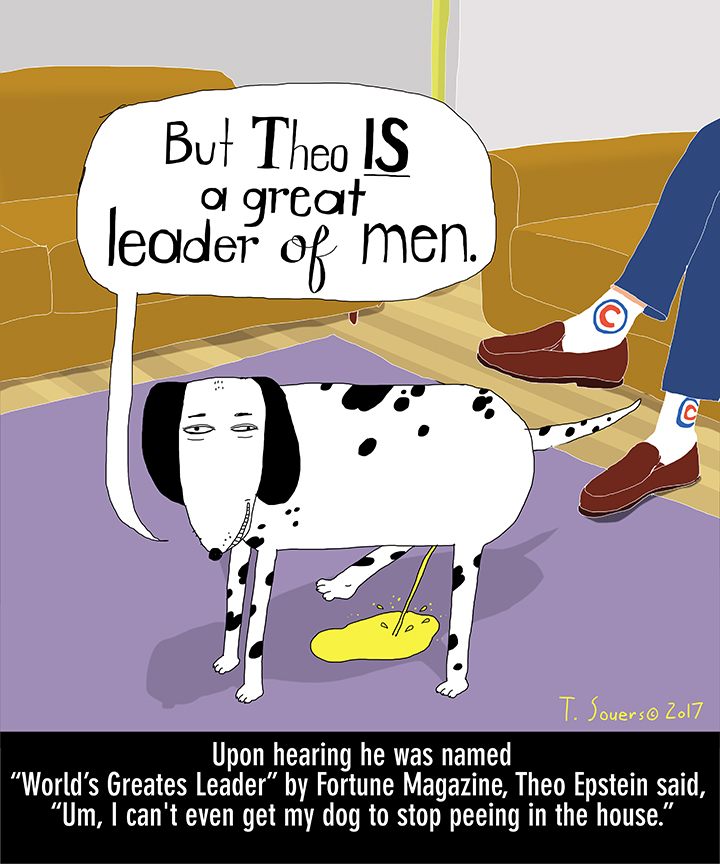 I was rolling when I heard this news.
Theo Epstein, our own President of Baseball Operations, was named "World's Greatest Leader" by Fortune Magazine.
I'm sure you've already read his texted response to Buster Olney from ESPN: "Um, I can't even get my dog to stop peeing in the house. That is ridiculous. The whole thing is patently ridiculous. It's baseball -- a pastime involving a lot of chance. If [Ben] Zobrist's ball is three inches farther off the line, I'm on the hot seat for a failed five-year plan. And I'm not even the best leader in our organization; our players are."
Yet another reason to love the guy.
And surely Fortune did themselves a huge favor with this pick, because before this I never even knew they did a "World's Greatest Leader" thing, did you?
And I'm SO HAPPY for David Ross and his dancing exploits on "Dancing with the Stars", but again... there's a show that I'd promised myself I'd never watch.
So good for the people who run that show.

But I'll be even MORE HAPPY when real baseball starts in St. Louis a couple Sunday nights from now.

You saw Jake hit the snot out of the ball yesterday with his magnificent 465 foot shot.
You saw in the rain shortened game the other night that Kyle Schwarber went deep with what looked like an effortless swing, and also bunted for a single which did not look totally effortless.
You saw that Brett Anderson was named the 4th starter and Kyle Hendricks stays the 5th so the pitchers can go from righty to lefty in the rotation.
And that Mike Montgomery goes back to the pen, where I really (and I think Joe really) likes him.

Wednesday at 8:05, listen to Pat Hughes say, "Chicago Cubs baseball is on the air". So, it was 2008 and I'd done this painting of my bike...
I still do this - you bungee a transistor radio to your bike and go ride around listening to Pat and Ron (back then it was Ron Santo) call a Cubs game.
It can just be a ride up to Walgreens, or a long slow glide around the park, but there's something magic about the transistor that I just love.
Anyway, I had the painting at work for some reason and got a call from a friend who was doing a State Farm commercial (can't find it on You Tube) that had Pat and Ron in the soundtrack.
They were recording and would I like to come over.
HELL YES.
But I had stuff to do and couldn't leave for a bit.
Late, I cabbed over to where they were recording, hit the elevator button and out walks Pat Hughes and Ron Santo.
Come ON, MAN!
I wish I could remember what I said because.. pretty sure it was dumb but, I did manage to pull out the painting and have them sign.
They were so nice, and normal, and everything you hoped they'd be.

It's one of my most cherished paintings.
Anyway, I was listening to Len and Ron a couple days ago and heard Len say that Pat's first game would be Wednesday night.
Hopefully I didn't miss something and got this right, but no matter what I'm gonna have a radio on at 8:05 (Chi time) for the Cubs vs Reds game so I can hear Pat say those magic words.
"Chicago Cubs baseball is on the air."
That's like official Summer stuff.
Maybe time for flip flops.

Javy Baez' hands are too valuable to be sliding into bases like that. 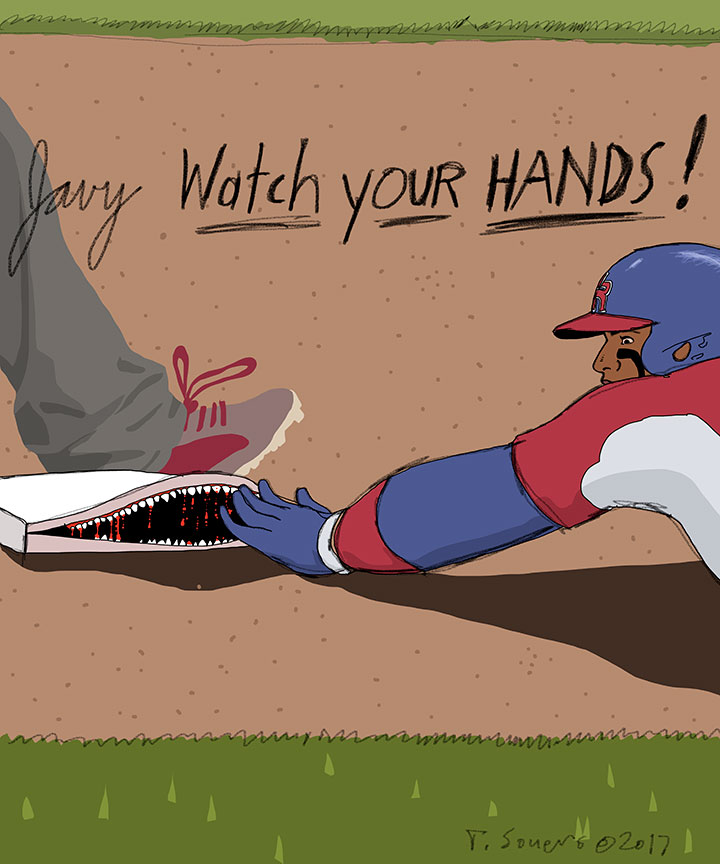 I've seen more about Javy Baez during this WBC than almost any other guy.
Not that I'm going out of my way to watch, but Baez seems to be dominating the highlights online.
The no-look tag the other day was seen by the entire country probably more than once, and yesterday his daring stolen bases vs USA were The Thing.
Awesome, Javy.
But I'm like your grandma, dude.
No running at the pool, don't look directly at the sun, and would it kill you to slide feet first once in awhile?
It's become clear that the Hands of Javy are just. so. valuable.
You and I know that bases can bite, so...
Slide the other way around, please.
I've heard arguments both ways, and it's maybe a whisker faster to slide headfirst, but it just ain't worth it for Javy.
Especially in the World Baseball Classic.
No it's not a "who cares" situation - obviously they're playing for keeps out there.
But a finger injury like he had in '15 would suck right now, 2 weeks from real baseball.
It's a habit.
Break it.

Hope you're having a fabulous St. Patrick's Day weekend.
And Go Cubs.

Cubs Ian Happ lets his bat do the talking. 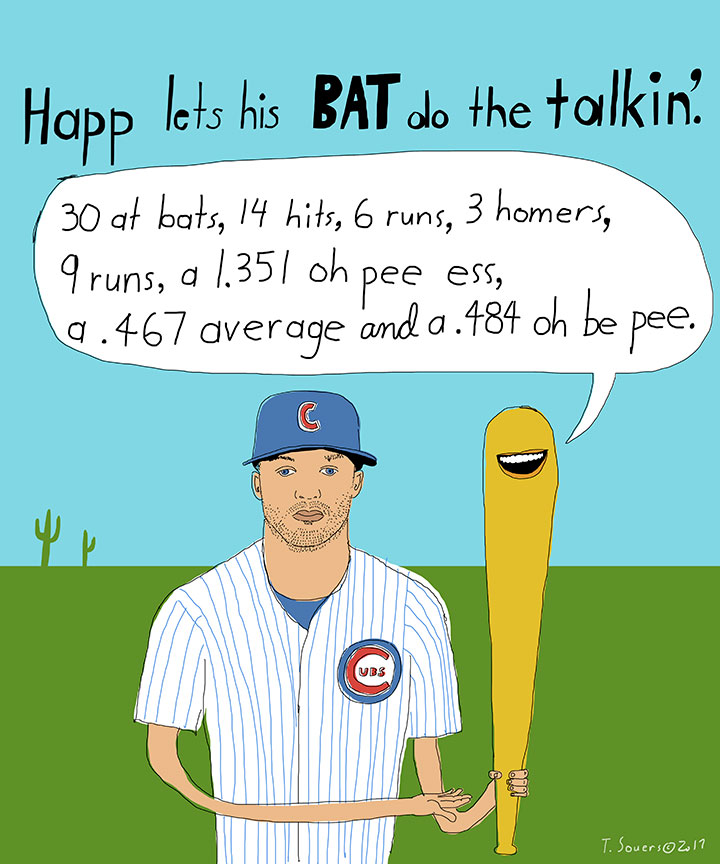 The Cubs' kids...
It's so hilarious to say "Cubs' kids" because the almost all are.
But the Cubs' kids are just so freaking good.
Ian Happ is having a spring that... seriously can you imagine if we were back about ohhh... 7 years?
Ian Happ would be the talk of the town.
Ian Happ would be The Great Hope of The Future.
Lou Piniella would have already said, "Fellas, this kid is good. He really is. Have you seen him swing a bat? He can. He really can. I think he's the starting second baseman. I really do. He's the second baseman. What can you do?"
Unfortunately for Ian, he's gotta wait for about 35 Cubs to get hurt or traded before he can come up.
In the meantime, we'll hear about how he needs seasoning at 2nd base.
But my god have you seen the swing?
What a glorious time to be a Cub Fan.

That's all, except it took me 2 hours to drive in this morning.
If not for Ian Happ, I'd be in a bad mood.