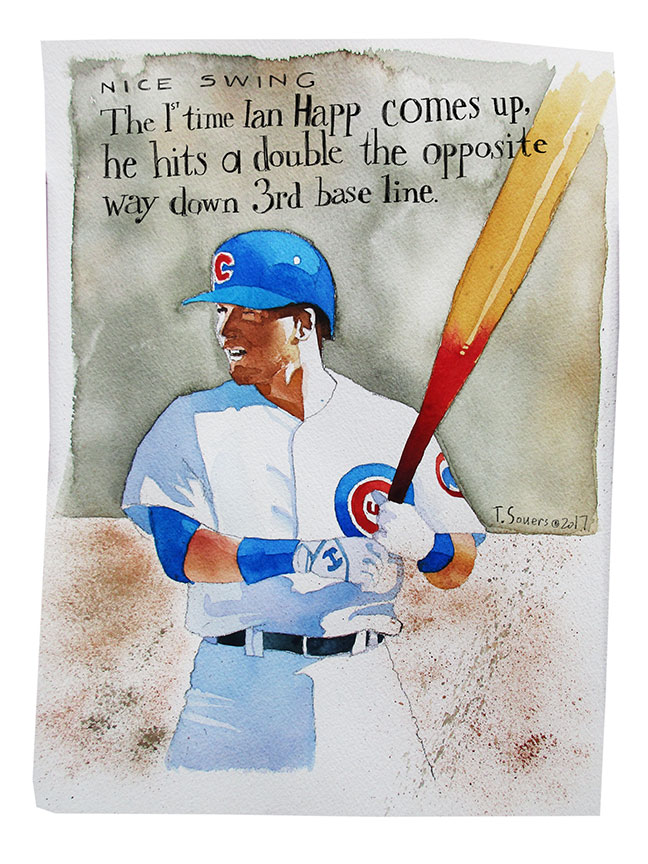 Maaaaaan.
How cool was that?
"Honey! I'll just be down here in front of the tv for the next couple hours WATCHING THE CUBS."
Soul-replenishing, joy-bringing, hot dog-eating baseball.
I found a tweet with the starting lineups for both teams (the split squads), but didn't realize Ian Happ was DH-ing until he came up in the 2nd, in the middle of the Cubs scoring 3.
Happ's a switch hitter, so he's batting lefty against A's righty Jesse Hahn.
Smack.
Double.
That was after seeing Addison Russell walk, new Cub Jon Jay double, and Matt Szczur's single off Hahn's glove that knocked in Russell and Jay.
And... right back in it, aren't we?
Talkin' baseball.
Soooo happy.

You all heard that intentional walks are maybe gonna be a gimme-play, so instead of having to throw the 4 pitches all they'll have to do is signal from the bench. The batter takes the base.
Both Len and JD were super casual about it.
All I can say is every time they actually change a rule to make the people who lack attention spans happy, it'll drive me nuts.
But also, it'll drive me more nuts to allow myself to be driven nuts when stuff like this happens.
Blah blah blah.

Far more interesting is Kyle Schwarber leading off.
Or maybe next Saturday (same time, same station, vs Dodgers) we'll get a game with Eloy Jimenez and Jeimer Candelario playing.
Anyway...

Last week COMPLETELY spoiled us with the 70 degrees.
You walked outside yet today?
Don't.
The wind came back, it's freezing and horrible.
Instead, turn on your tv at 2:05 (Chi Time) and watch the World Champion Cubs take on the Oakland Athletics.
WGN, of all stations.
Okay, maybe first you'll wanna run down to the Jewel and get some hot dogs, just make sure you bundle up.
And then... well it's a split squad day so half the Cubs'll be playing the Giants (I think that'll be broadcast on At Bat).
But who knows, maybe we'll see Kyle Schwarber leading off, Jason Heyward's swing, a Baez tag, a Rizzo bomb.
Maybe the reigning MVP will be in your living room today.
Maybe you'll get your first look at Eloy Jimenez or Ian Happ or Jemile Weeks.
It's almost hilarious to think about Cub prospects because almost every Cub was a prospect about 5 minutes ago.
Anyway, summer starts today at 2:05.
Don't miss it.

Next... the "That's Cub" slogan.
Can you imagine?
The audacity.
All your jinxy nerve endings just went, "NOOOOOOOOOOOOOOOOOOOOOOOOOOOO!"
But I like it alot.
They earned it.
What would it be like to be about 8 years old and a brand new Cub Fan?
Without all the baggage?
You just got your first Cubs hat last year, maybe an Addison Russell jersey.
And your favorite team is a winner.
Fantastic.

Okay, gonna run to the store. 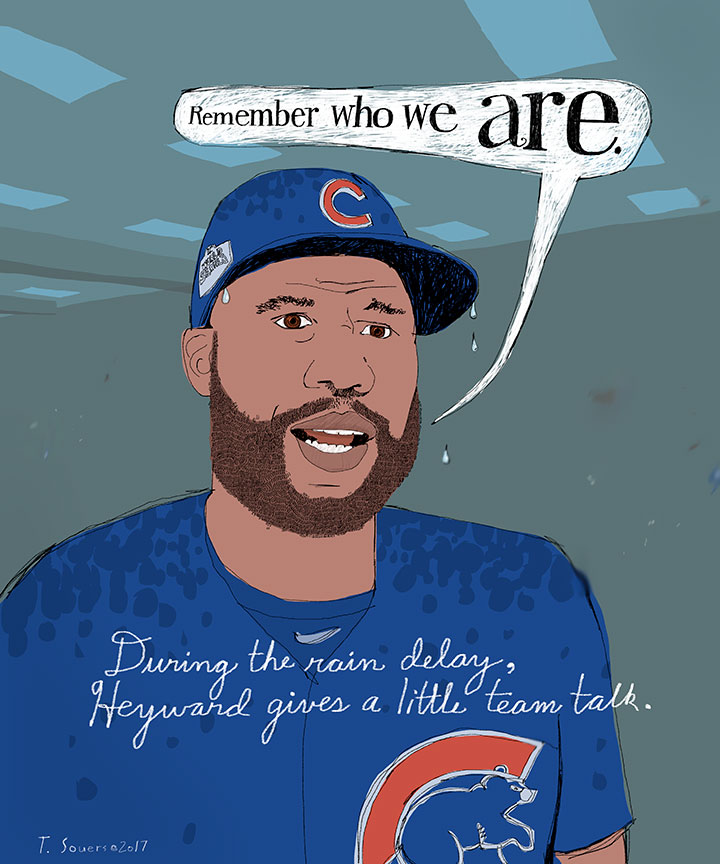 This is a little chunk of super cool Cub history, this little speech.
You remember the miracle rain delay orchestrated by the Baseball Gods - their way of saying hey man, get your shit together.
Those guys are NEVER nice to the Cubs, and yet this time... (even though I was FREAKING OUT when the tarp came out) it turned out to be a nice thing.
And Jason Heyward took the opportunity to rally the troops.

Maybe somebody had a camera going in the weight room there, but I don't think we'll ever know exactly what was said.

Here's the quote from MLB: "I told them I love them," Heyward said. "I told them I'm proud of the way they overcame everything together. I told them everyone has to look in the mirror, and know everyone contributed to this season and to where we are at this point. "I said, 'I don't know how it's going to happen, how we're going to do it, but let's go out and try to get a W."

Well whatever, if somebody makes a movie about last season and the director is any good, that scene ought to bring tears.

And how about Jason Heyward?
In that moment, with his mojo certainly all mucked up with the starting and not starting, stepping forward and being the rarest kind of team mate: The guy with the sense that something needs to be said, and then actually saying the right thing.
Two vastly different skills there.

Which brings us to one of his other skills.
Batting.
We've been reading on and off that he's working on the swing, and pretty soon we'll get to see what kind of progress he's made.
All that remains to be seen.
But the one thing I do know is there isn't a guy on the team I'm rooting for more than Heyward.
He's a special player and a special guy.

Gonna miss Travis Wood.
For pure entertainment value, he's hard to beat.
Especially with the way Joe Maddon manages people with the athletic ability of such a guy.
2016 was a year with tons of memorable highlights, and Wood's catch in left was pretty far up there.
Was he the greatest pitcher?
Nah.
But still another atmosphere layer above "scrappy".
Anyway, I figured I'd done a ton of illustrations on him and it's true.
This is from last year:

That kinda sums him up.
I can't find the one where I had him pitching, batting, and playing I think banjo in the band that plays in the stands during games - somebody emailed me to ask if that was true. 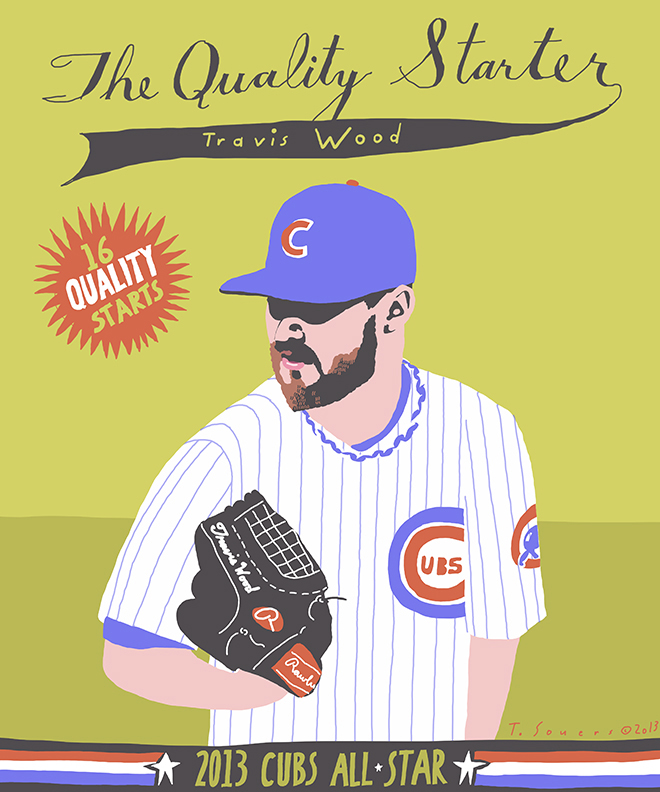 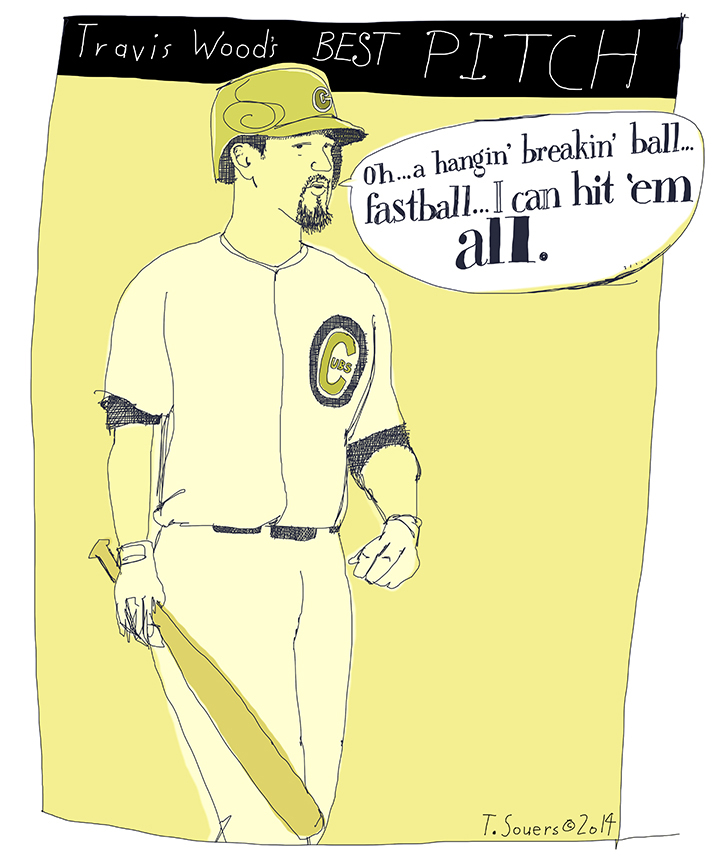 One game he gave up 5 dingers, which tied a group of distinguished pitchers all of whom probably thought: 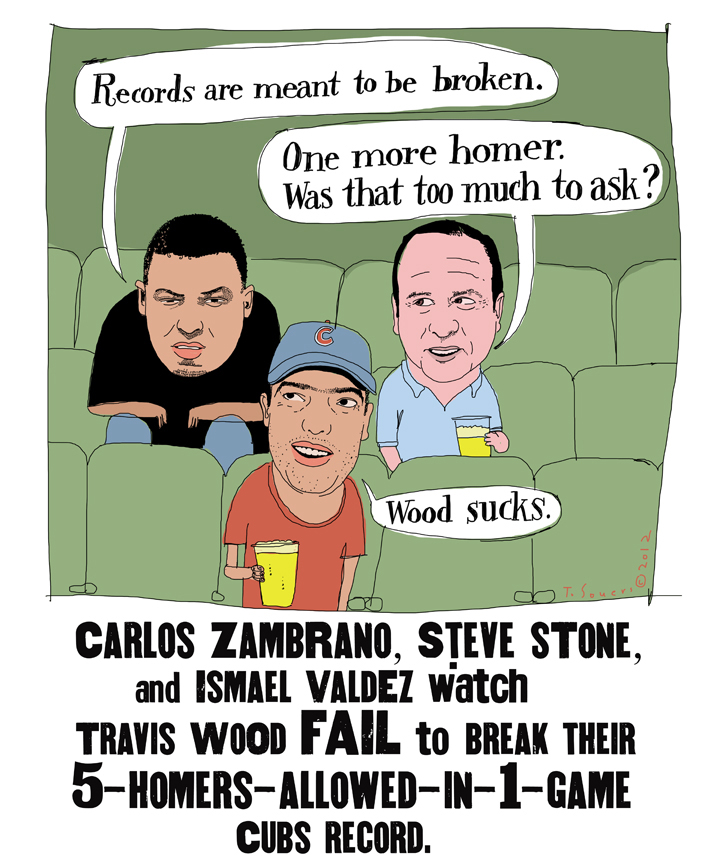 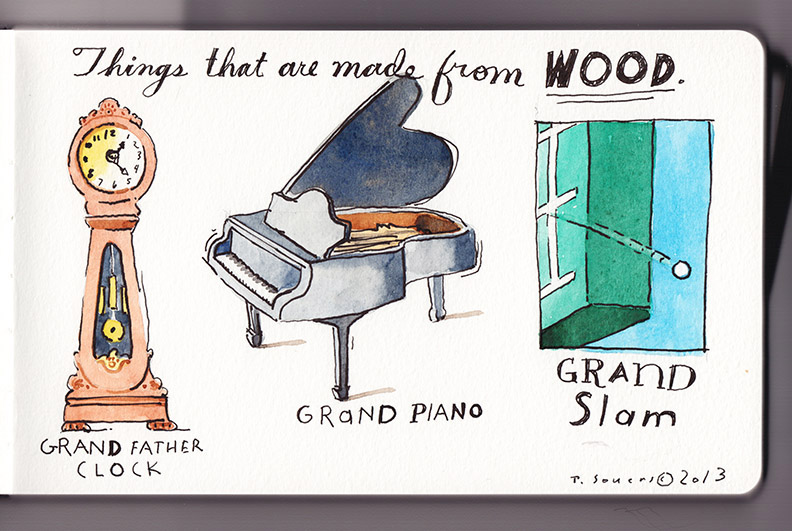 Anyway, this post is late of course but Wood gets 2 years and $12 mil and... in a really sad way with the passing of Yordana Ventura, a good opportunity and I wish him well.

Next is I'm sure you saw that promising young Cardinals' pitcher Alex Reyes is out for the season with Tommy John.
There is nothing that scares me more than this and I do not wish it upon anybody, even a Cardinal.

Oh man do I LOVE THIS DAY!
I was talking to somebody about what it used to be like.
Before the internet.
This day was SO abstract.
If somebody said "Pitchers and catchers report today" twenty years ago, you'd have thought it was an assignment at work.
Now... I bet if I went to France they'd know what I was talking about.
The one bummer?
Travis Wood is a Royal.
That and I haven't washed my car in weeks, but whatever.
Wood was one of Theo's first moves, remember?
For Sean Marshall?
HE'S A TOTAL JOE MADDON GUY!
I bet I've done 8 illustrations of Travis Wood.
Pinch hitting, pinch running, striking guys out, hitting homers, catching fly balls in the left field ivy...
Travis Wood.
Gonna miss that guy.

Oh well, he's in Kansas City now.
You're wherever you are, and baseball just happened!
Did you do the blue and red flowers thing for Valentine's Day?
I swear, I should be in flower marketing.

Gotta run, but... it's gonna start again.
Before you know it, you'll be dusting off your transistor and planting tomatoes to the glorious voice of Pat Hughes.
(Sorry Ron Coomer, you're kinda awesome but I wouldn't call your voice "glorious".)

Of all the Cubs things to get excited about, I cannot wait to see Baez just tag somebody out. 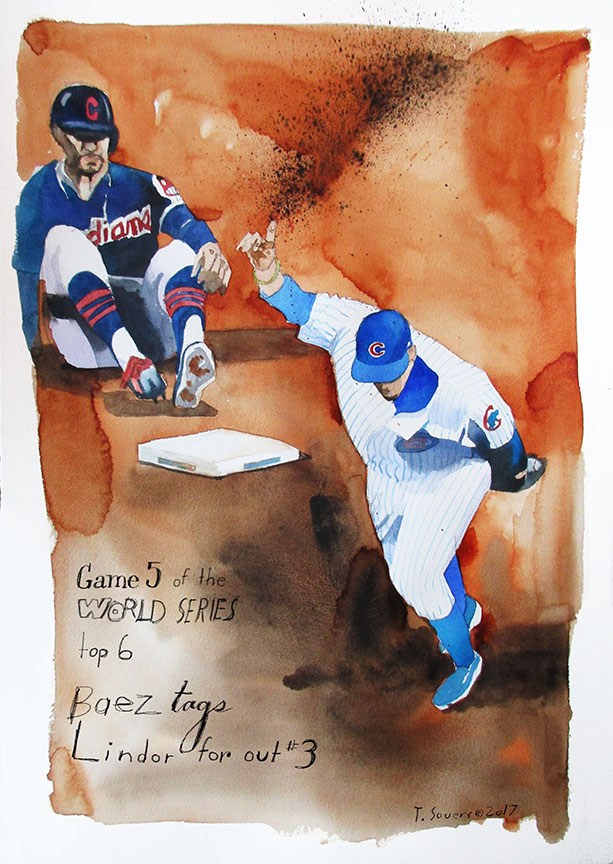 Pitchers and Catchers Report.
Baseball.
The Cubs.
It's getting closer.
And of allllll the things to get excited about, one of them is new and rather small, but it's definitely a thing:
Baez Tagging.
The incredible fundamental skill turned up to 11 by Javier Baez.
This painting is from Game 5 of that last World Series won by the Cubs, remember a couple months ago?
That one.
Cubs up 3-1 in the top of the 6th with 2 out and Francisco Lindor gets a single off starter Jon Lester, knocking in Rajai Davis to make it 3-2.
You and I hyperventilate as Lester delivers to Mike Napoli, but then what happens is Lindor takes off for 2nd and old man David Ross is already pissed because Davis had just stolen 2nd before he scored.
He throws.
And Javier Baez slides in front of Lindor and does his thing where he's already moving his glove towards Lindor when he catches the ball, continues it's movement and tags Lindor in the ribs.

Say this out loud: OUT!

One syllable - that's about how much time it takes Baez to tag somebody.
It's almost like Ross just threw the ball at Lindor and hit him in the ribs, only there was that crazy cool middle part you need to see in slo mo to comprehend what Baez did with his amazing glove.
And when you're World Series Warrior Javier Baez and you just tagged a guy for out #3, you go ahead and flash #1 as you run off the diamond.

And Lindor can think about the "caught" that will be placed in front of the "stealing" in the box score.

GOD I CAN'T WAIT TO SEE THAT AGAIN!!!
I mean, I already miss Ross like crazy but next time it'll be Willson Contreras or Miggy Montero or maybe even Kyle Schwarber.
But Baez...
Imagine getting in a slap fight with him.