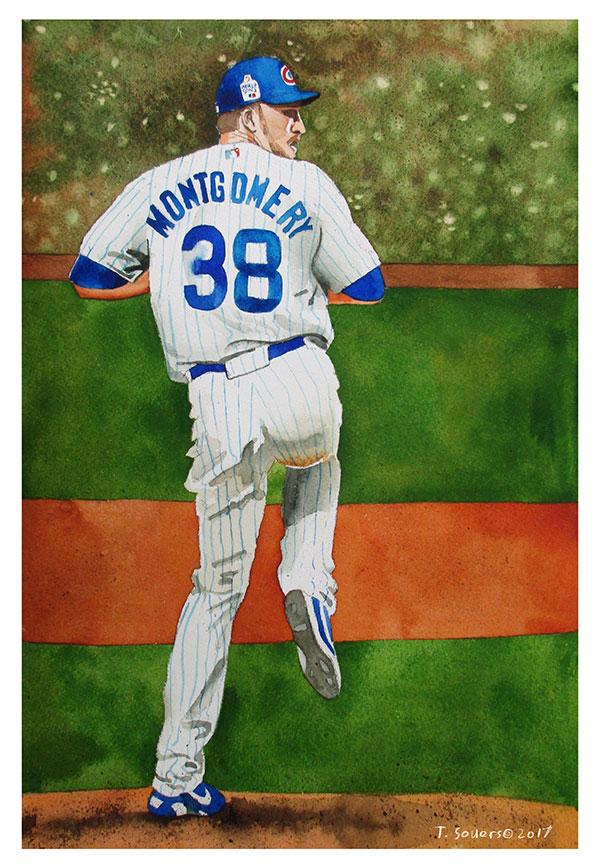 It's sooooo freaky to think that the last time we saw him, he was on the mound in the bottom of the 10th in Game 7 of the 2016 World Series.
In the grand scheme of things, he'd been a Cub for about .003 of a second.
He threw 2 pitches.
And the Cubs won.
It all.
Mike Montgomery.
Guy's 27.
He won't get to tell his grandkids til about 2050.
It was his first save ever.
Remember Orval Overall?
Here's a link to the video of him throwing the last pitch the last time the Cubs won, in game 5 of the 1908 World Series:

I hope you didn't click on that, because there is no link to Orval Overall throwing the last pitch of the 1908 World Series.
Nope.
But there will be one of Mike Montgomery for a million years.
How famous can a role player from last year's team get?
(By the way, that painting is from a picture I took at the WS game I got to go to, Game 4, when he came in for John Lackey in the 6th.)
But THIS season will probably be a different story for him.
He's at least this year's Jason Hammel, although clearly Joe Maddon loves and trusts him as a utility pitcher who can fill any role.
And now they picked up another surgery recovery guy, Brett Anderson, also a lefty.
Anderson recently had back surgery, but as a starter for the Dodgers just 2 years ago pitched "180 1/3 innings of 3.69 ERA ball with 5.8 K/9 against 2.3 BB/9, leading to the qualifying offer."
If I were a pitcher and had had any kind of injury or somehow needed to resurrect my career, I'd just tell my agent to hook me up with Chris Bosio.

Okay, what is it now...19 days til pitchers and catchers report?
Championship football was so lopsided and dull... I already gave away my annual $20 Superbowl Square money never to be seen again... the never ending gray skies in the midwest... baseball just cannot get here soon enough.
I miss my flip flops like crazy, too. 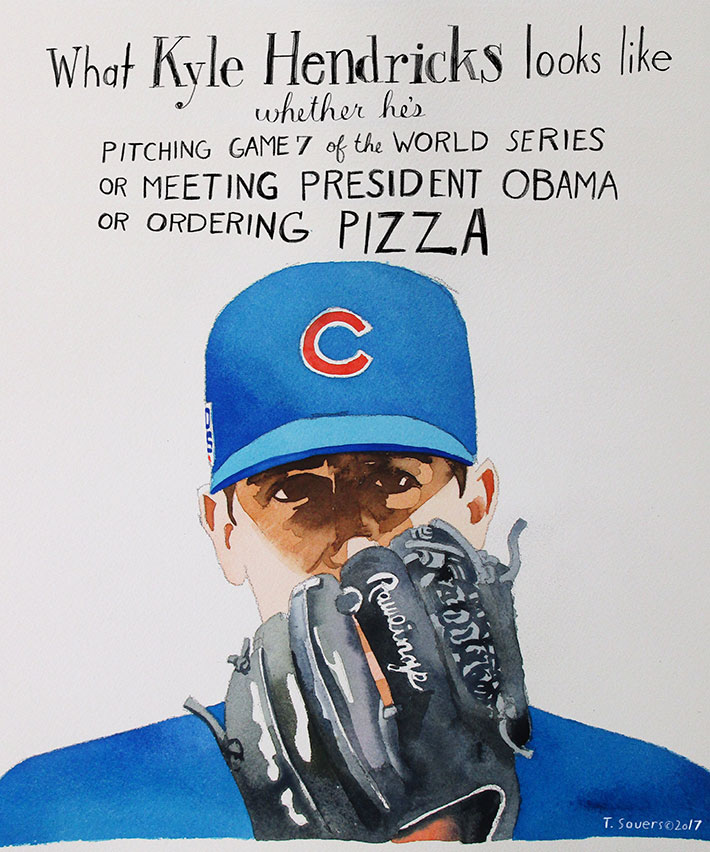 Some call him "The Professor", but that reminds me of Gilligan's Island rather than the guy we see with ice water in his veins throwing strike out stuff with insane, never-straight precision.

In about 3 and a half weeks, young Kyle's gonna show up in Arizona with Jake, Jon, Mr. Montgomery, Mr. Lackey and the boys to play catch with all our favorite catchers except David Ross, who's now workin' for the Man in the Cub Front Office.
It's been socked-in gray and rainy here in Chicago for about a month, and today promises to be just as crappy.
So I'm just gonna think about the upcoming Valentine's Day, when in reality it'll be the first Pitchers And Catchers Report Day when the Cubs are also the World Champions.

Think I'll get my wife a nice blue and red flower arrangement.

Cubs going to the White House.

"Hi Mr. President. It's been awhile."

Said every Cub making the trip to the White House on Monday.

I tried to find anything about a Chicago Cubs visit to the White House in 1908, but can't.
That's because the first World Series Championship team to visit the White House "is believed to be the 1924 Washington Senators, who visited Calvin Coolidge..."
Had that tradition started earlier, the World Champs would have been greeted by Theodore Roosevelt.
Which is cool and vaguely appropriate because of the Cubs' link to Roosevelt via Ted Lilly, who's great grandfather rode with Mr. Roosevelt and the Rough Riders. (That's my angry post about keeping Terrible Ted on the team 7 years ago.)

But if you were on the 2016 World Champion Cubs, you could still find Roosevelt's portrait and say howdy that way. (Roosevelt was painted by John Singer Sargent! This link is to all the presidential portraits.)

Isn't it nice to be current again?
And it's awesome that the Cubs get to visit President Obama from Chicago, even if he's a White Sox fan.
(Not talking politics here at all, it's just cool.)
For sure some funny jokes ahead with this visit.

The Cubs Convention started last night.
It sold out minutes after tickets went on sale in November.
Originally $108 for a weekend pass, and... LOOK, there's still a couple available on Stub Hub!

I'm not going.
I don't really know how many Cubs Conventions I've been to, but this one would surely be the most insane.
And... imagine the autograph lines.
People started lining up at 4:30 this morning.
It would be a drag to be signing next to Kris Bryant, you know?
1,000 kids in his line, 42 in yours.

From Cubs.com, here's what is happening today:
"Saturday's program continues with fan favorites such as the return of Cubs Jeopardy, which features unique trivia with Cubs alumni. Popular reoccurring Saturday sessions will be back, including Baseball Operations, Cubs Business Operations Update, Joe Maddon & His Coaching Staff, Kids Only Press Conference presented by Advocate Children's Hospital and Ricketts Family. New to Saturday's line-up will be On the Mound presented by Wintrust, All-Star Infield presented by Wintrust and Cubs Legends. The evening will conclude with long-time Convention favorite Cubs Bingo presented by Budweiser and led by Wayne Messmer."

Listening to Tom Ricketts, or Theo and Jed, now as conquering heroes would be cool.
You can follow @CarrieMuskat or @mullyhanley for live updates.

Well, let's see...
The Cubs are gonna visit the White House on Monday - that's pretty cool.
Kris Bryant got married and I'm sure that was a super fun event.
And there's the Tyson Ross thing, which I wish would get resolved.
Then there's other stuff - the Clemson win which was pretty cool, even though... just not invested in those teams.
Every time they cut to Nick Saban it seemed like he was slamming something on the ground and having a hissy fit over a player's mistake. And the announcers were like, "And RIGHTFULLY SO! Saban SHOULD be angry."
I just got sick of it.
Blackhawks beat the Red Wings, which is always nice.
New York is getting a taste of Weird Derrick Rose

Otherwise, I have a silly story which may help you pass the time while waiting for baseball...

So we opened this new agency, We Are Unlimited.
And the new CEO gathers everybody in the lobby to give a talk, but in a hall on the way there someone spills coffee, so I help clean it up.
Now I'm late and arrive outside the big, modern glassed-in lobby.
It's like an over-flow room, this hallway.
I'm standing next to one of the lobby doors that's open to my side - it's one where if you push it all the way open, it locks in place.
I'm looking at the CEO through the doorway, and he's making eye contact with everyone as he speaks - good speakers do that.
And If you wear glasses like I do, you know how they can just slide down your nose sometimes?
That happens.
So I bring my right arm up and extend my index finger to push up my glasses at the exact moment the CEO's gaze is sweeping my way, and just as we make eye contact my arm bumps the door causing the finger to come up short of my glasses and forcing the finger about a half inch into my right nostril.

All that happened in about 2 seconds.

His expression didn't change or anything, but surely that was a nice little retina snapshot.

No matter my real age, in my head I live at about 4th grade.
And with that perspective I'm pretty sure that any time in the future when I see the new CEO he'll say, "Hi Tim."
But in his brain he'll think, "Hi Nosepicker."

Okay that's all I have and thanks for wasting a little time with me as we all wait for baseball.

Portrait of a Cub Fan right after Rajai Davis hit the game tying homer in game 7. 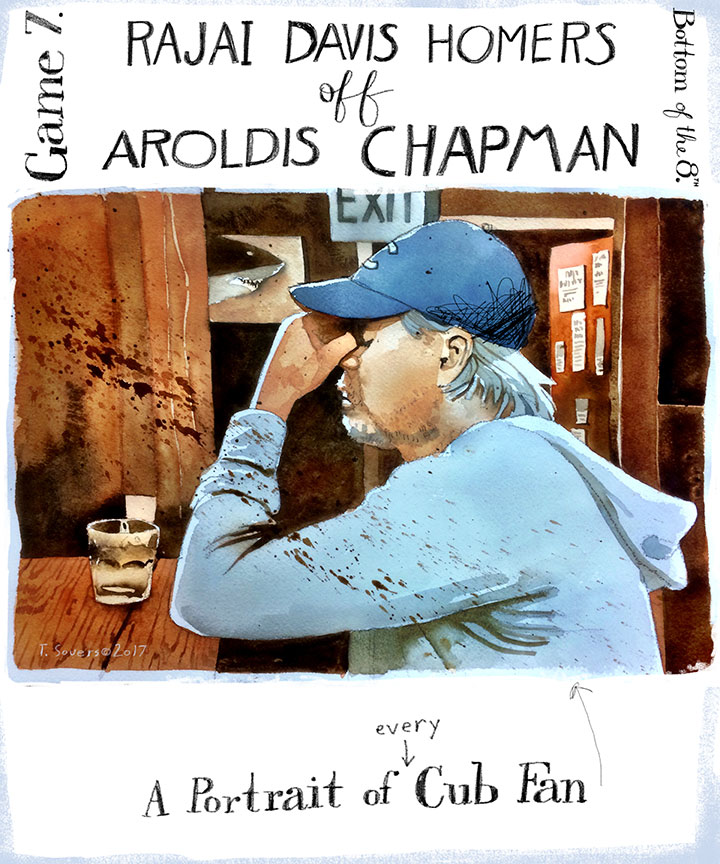 I'm sure you remember the Rajai Davis homer in Game 7.
Off Aroldis Chapman.
With 2 out in the bottom of the 8th.
To tie the game at 6.
He was at Ercoles (Erc's) in Manhattan Beach, where most of the other people were Dodger fans.
And somebody took a picture of him right after Davis hit it out.
He sent it to me the next day, and I forgot about it til yesterday when I did this painting.

Since that game, I've had people admit to me that they went to bed right after Davis' homer.
That's how bad that homer hurt.

I was sitting with Grog next to Ramona Biliunas and her husband for game 7 of the Cubs v Marlins NLCS in 2003 when the Cubs ran out of outs. 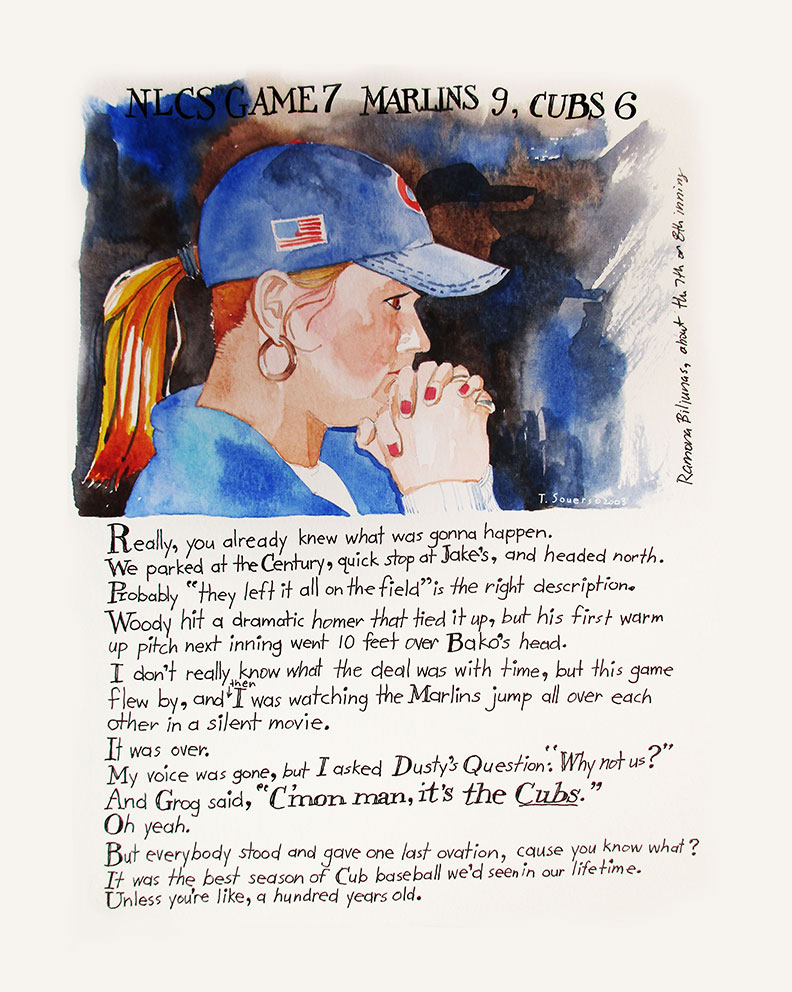 "Come on man, it's the Cubs."
That line is the one that kills me.
It's the same line I thought when Davis hit his homer, only a lot more profane version.

Man I am sick of all the "2016 SUCKED" stories.
I don't talk politics here, and I don't want to bring up any famous musicians or actors or anybody else who passed away.
Much better to just keep saying that the Cubs are the 2016 World Champions (read this story by Sam Miller, please).
And to think about Theo and Jed, who are figuring out how to give Chicago it's best chance at keeping the good times rolling in 2017.

(Whoops, an interruption, sorry... I just got a text from my son that said, "I haven't showered all year. GROSS!")

Anyway, look at this: 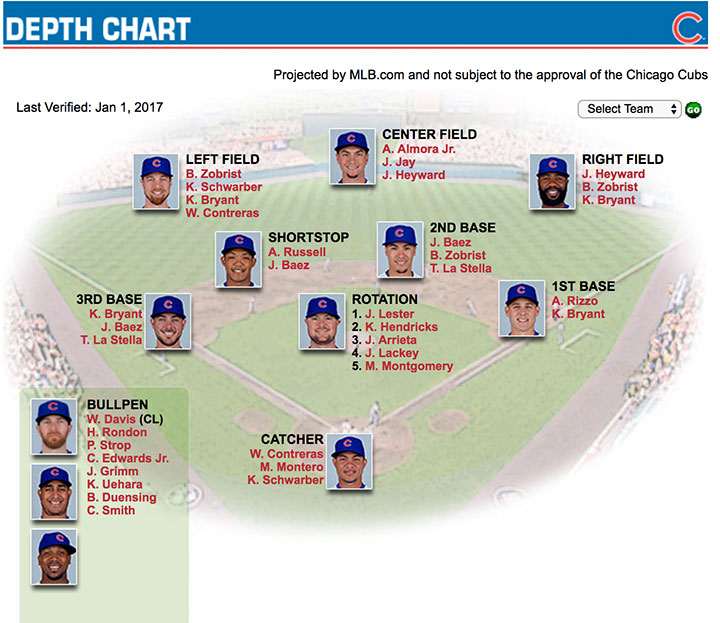 Wouldn't you hate to be the GUY who has to do this chart?
GUY: Theo, what am I supposed to do with Schwarber?
THEO: Put him in left.
GUY: What about Ben Zobrist?
THEO: You mean the World Series MVP?
GUY: Yeah, him.
THEO: Put him at 2nd.
GUY: But Baez is there.
THEO: Oh yeah. Um... How does Javier Zobrist sound?
GUY: Well, then his walkup music can't be "Benny and the Jets", right?
THEO: Crap. Invent another position just for the chart, then.
GUY: Like...2nd Fielder?
THEO: I DON'T KNOW. I have to pay attention to the pitching staff...

Anyway, Jon Jay and Wade Davis.
Two of the luckiest guys in sports, right?
Wade Davis wasn't that much of a surprise with his Joe Maddon link.
But Jon Jay was just a guy stuck in the muck out in San Diego, and then he gets a call...
You know Albert Almora is Theo's guy, and Theo is going to do everything in his power to allow Almora to be successful.
So it's smart, having an Almora/Jay center field combo so the heat stays relatively mild on the kid.
Who we last saw tagging and taking 2nd on a Bryant fly ball, and then scoring the go ahead run in Game 7.
Of all these Cub Kids with their baby faces, for some reason Almora looks like a man.

Um so, back to... I forgot to say Happy New Year.
Which is a funny thing to say considering I still well up almost every time I see or hear anything about the Cubs.
But 2016 will always be the Year of the Cubs, and 2017 will be the first step in seeing if the 2010's become the Decade of the Cubs.
Sounds pretty cool, anyway.