Well, you knew Dexter Fowler was gonna go somewhere, and of all places he ends up with the Cardinals.
It's always shocking - remember seeing Mark DeRosa in red?
It smarts.
(Well, there was Ryan Theriot too, but whatever.)
But with Fowler, I have nothing but warm feelings for the guy even though he went to the dark side.
Last season could not have worked out better, and the Cubs wouldn't have won the World Series without him.
So lets start out with that illustration, when at the very last minute he rejected the Oriole's offer and showed up at the Cubs' camp, and we were all overjoyed. 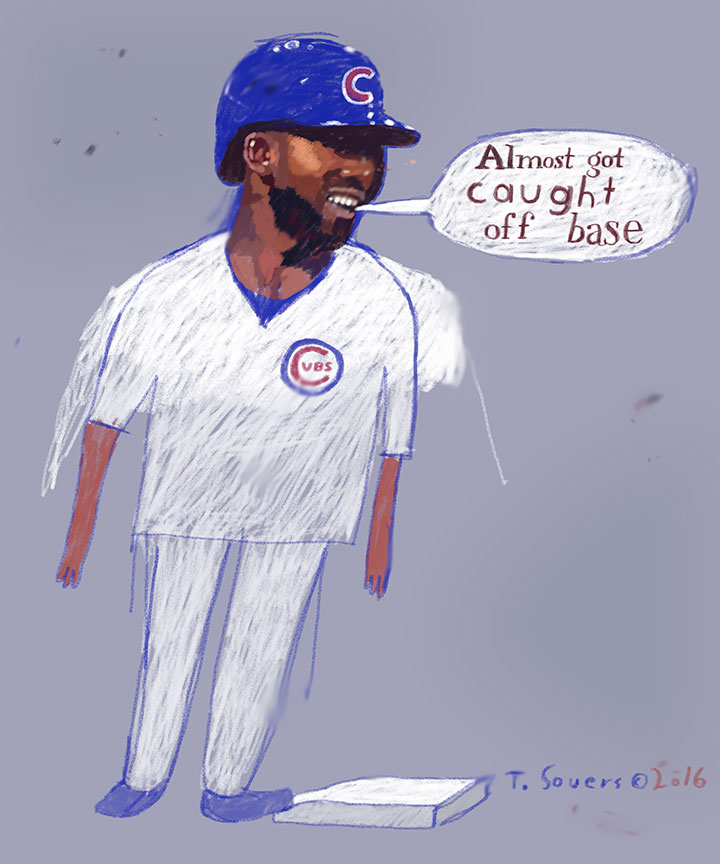 Here's one from end of July last year. Remember how he sustained some pretty great numbers in the 2nd half of 2015. 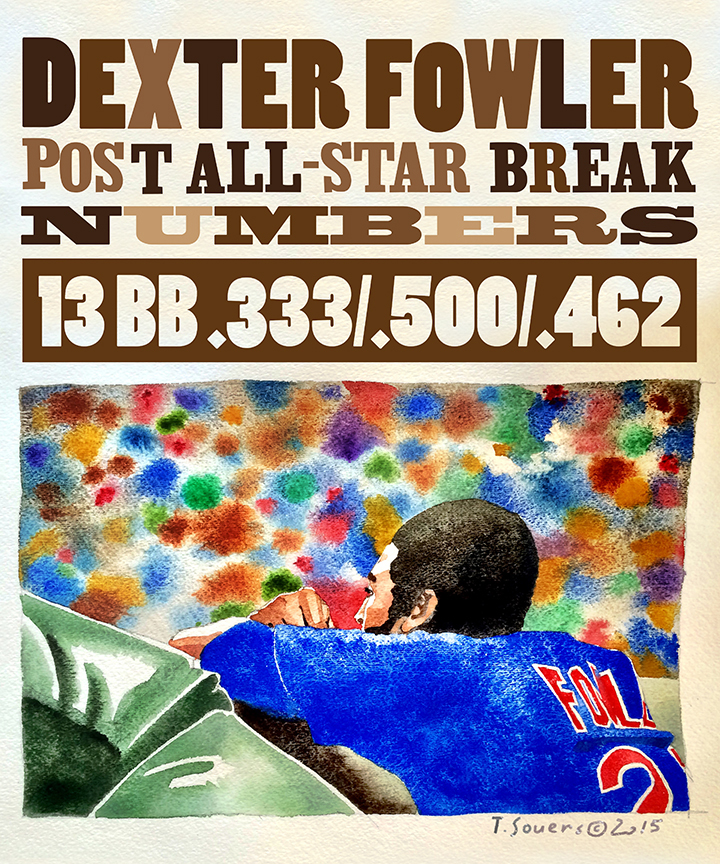 My first illustration of Fowler was when he was on the Rockies in '13, and had a rough day vs Jeff Samardzija. 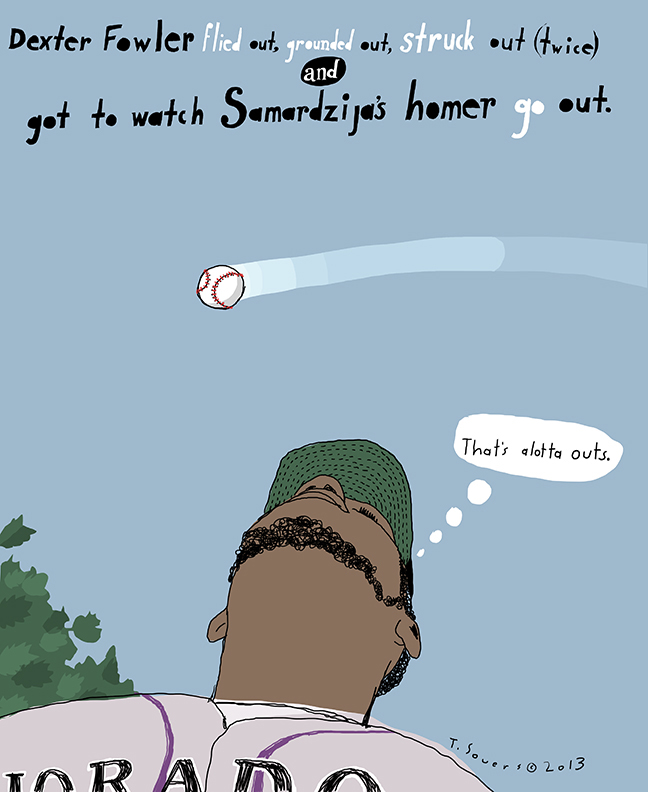 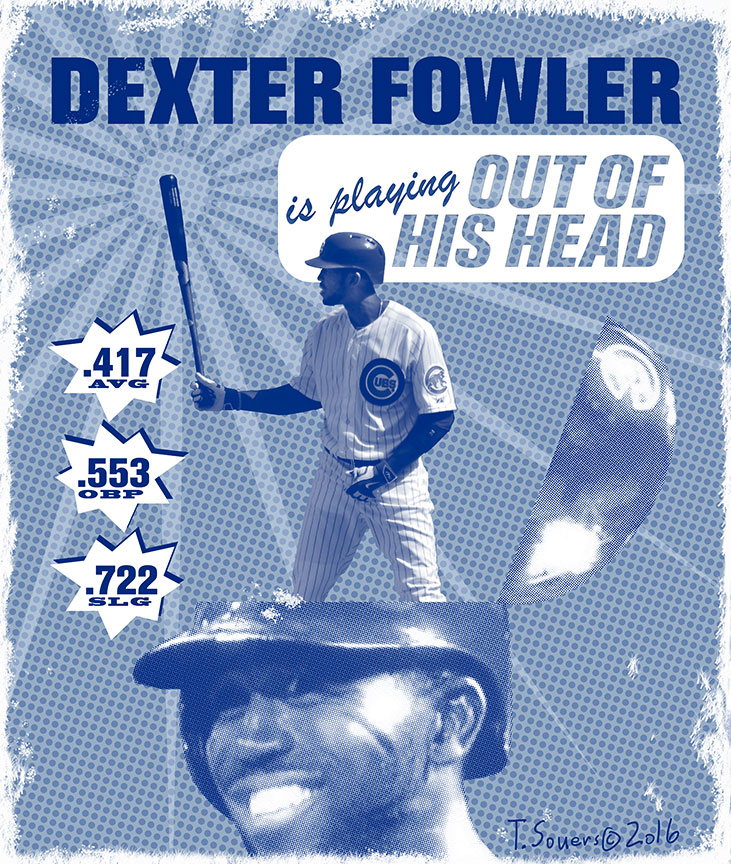 And as last year went along, Fowler's value to the team just really stood out. 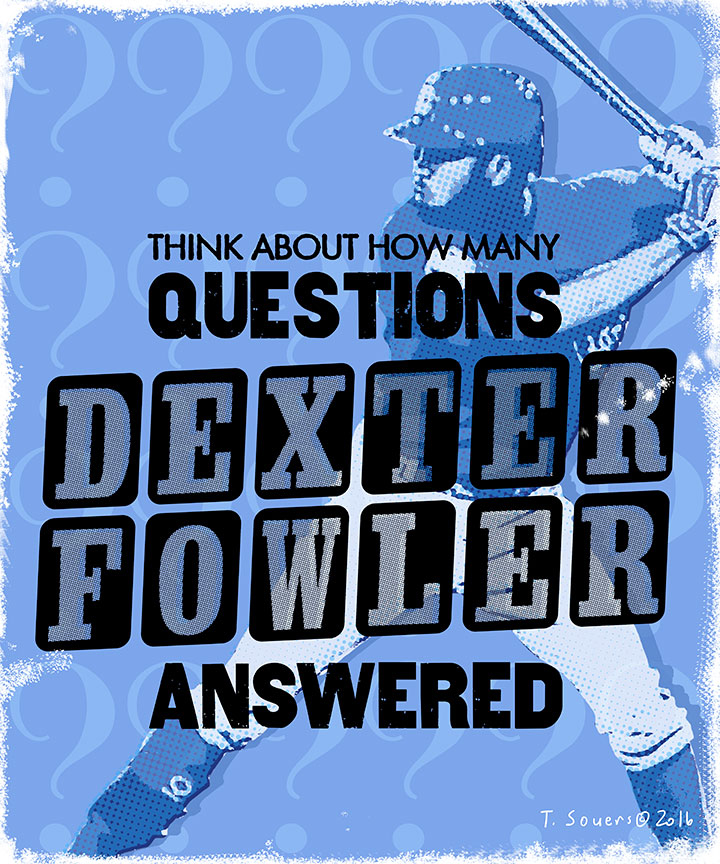 But this last illustration is the one.
When Joe Maddon has a saying for you, you know you've made the big time.
"You go we go" is what Joe said to Fowler, and damned if it wasn't true. 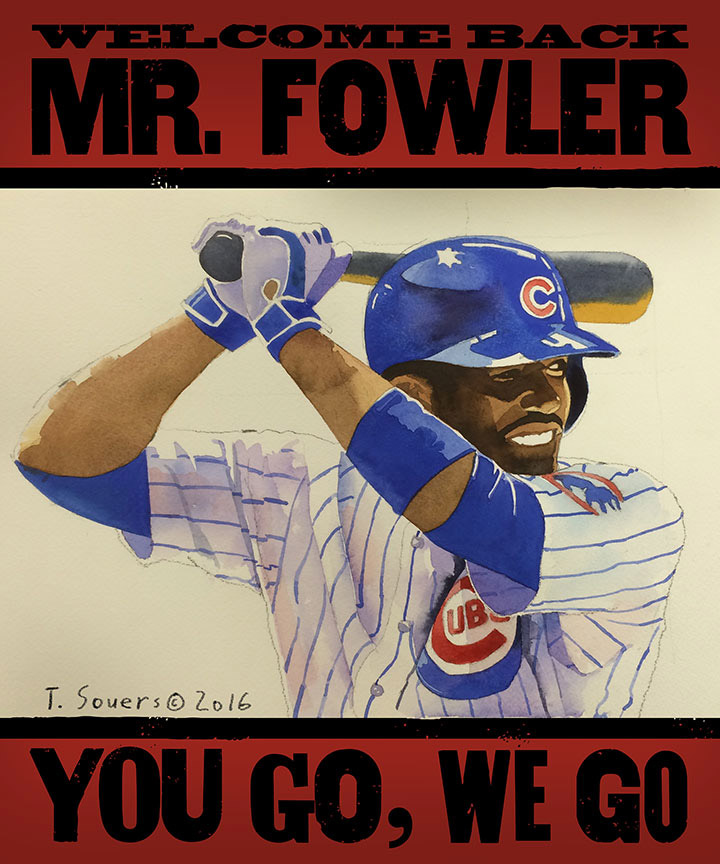 So, for sure gonna miss him not just for his performance, but also... what a great guy.
HAHAHAHA!
That's so easy to write right now.
Just wait til the bottom of the first on April 3rd, in St. Louis, when he comes up to bat as a Cardinal.

But now, look at the Cubs.
Rizzo, Baez, Bryant, Russell, Schwarber, Contreras, Almora... we'll have at least a couple more years of what may turn out to be the greatest core of Cubs ever.
And there are more incredible kids on the way.
The experience is so... the opposite of a lifetime of being a Cub Fan.
Because surely, more greatness awaits.

This was so flattering.
Thru Twitter, emails, and just... I got lots of people saying, "Hey make prints."
So first, I got help (thanks Di and Luke), we found a great printer, we made scans and looked at prints on different cool papers, and I'm super happy with how they turned out.
And now they're available.
As I said yesterday, art is probably gonna be my livelihood at some point in the future, so... I'm doing it as good as I can.
Here's the link to the Cubby Blue Etsy store.
After they're printed, I sign and number them.
For shipping, we're using foam board and Stayflats so they come flat and not dinged. 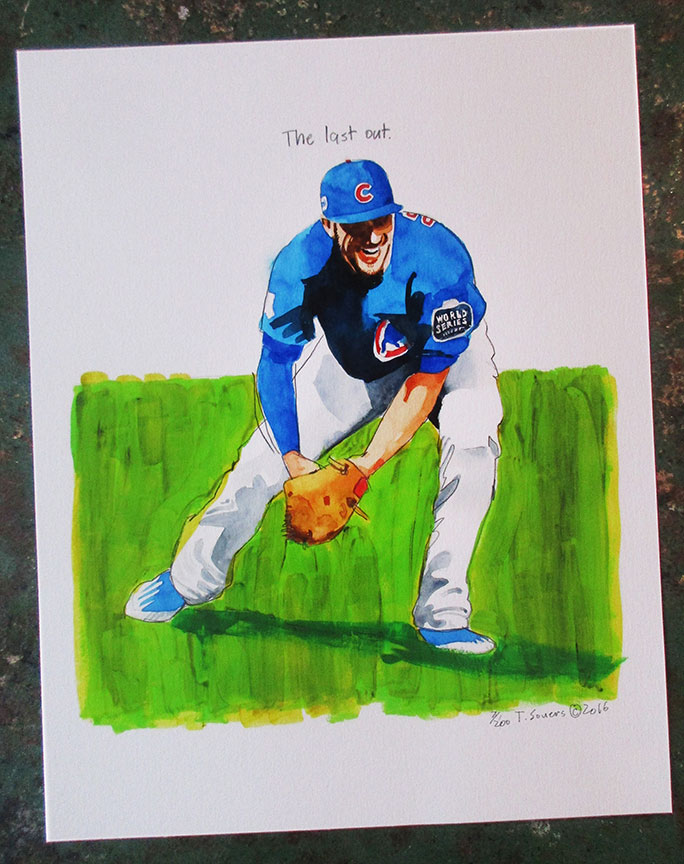 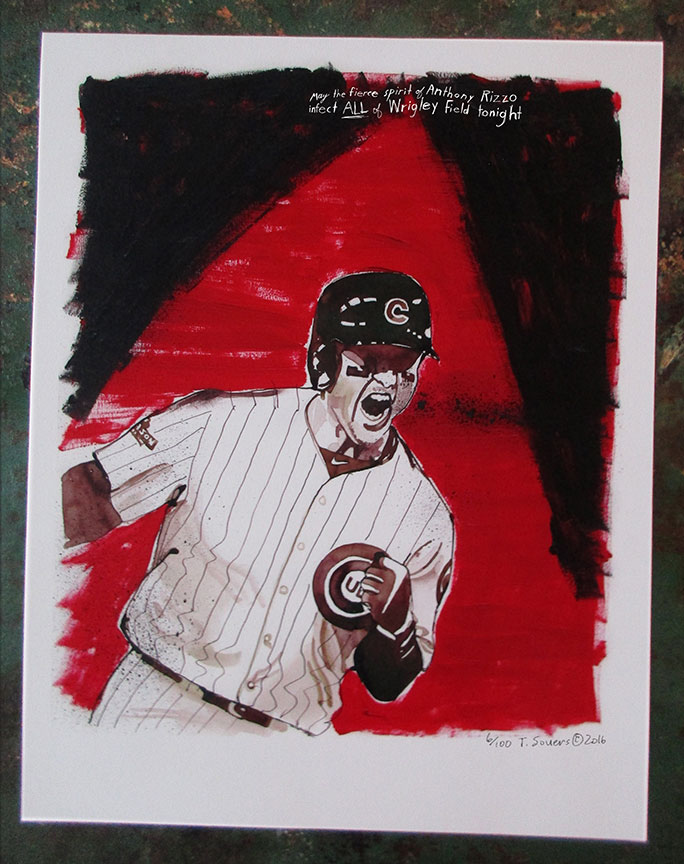 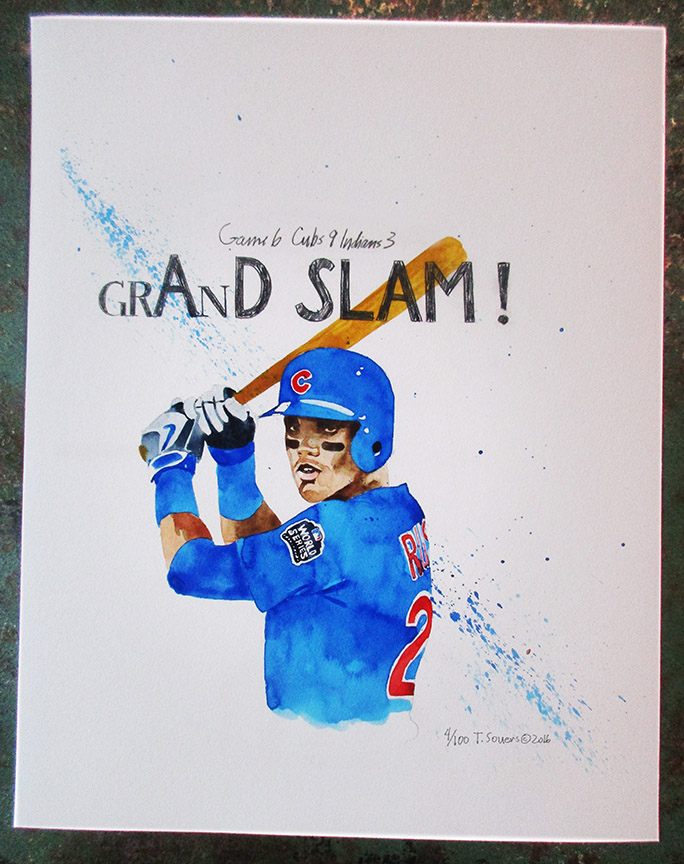 Well, I knew it and you knew it.
Jorge Soler.
There wasn't room, so...
Soler was traded for Kansas City closer Wade Davis today.

The Cubs won the World Series and I guess this kind of trade is going to feel normal, or maybe it already does.
But I look at Jorge Soler and think damn, this guy has more potential than Corey Patterson, Tyler Colvin, Brett Jackson and Felix Pie combined.
The size of the Cubs' locker at the MLB Talent Bank is so much bigger than what it's ever been in my lifetime it's impossible to explain unless you've been alive for as long as me.

Jorge Soler was signed by Theo and Jed in 2012, and they outbid the Yankees to get him. 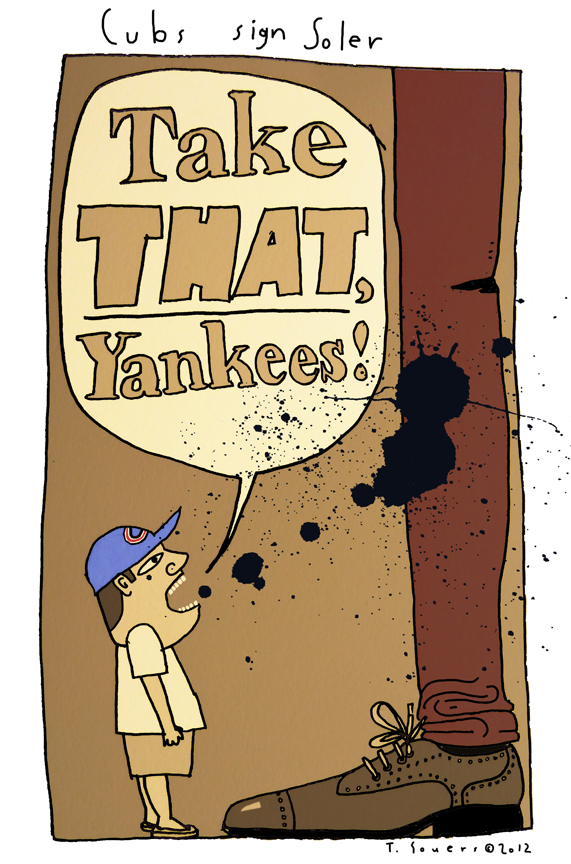 Looking back, I'm actually surprised at how many posts he was featured in here.
This is still one of my fav paintings of any Cub. 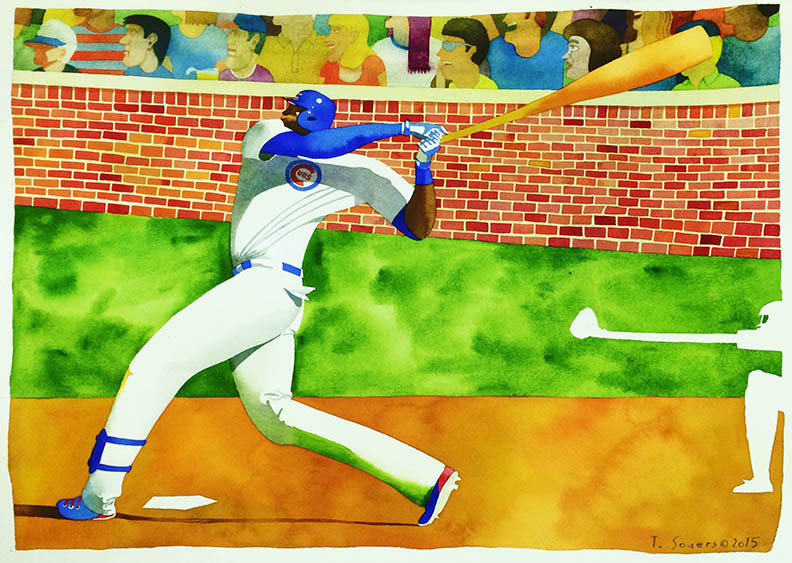 I thought he was gonna be a home run hitting part of the team for a loong time.
This one's from 2013.

This was from last year, the day after he'd been on the DL for a bit... 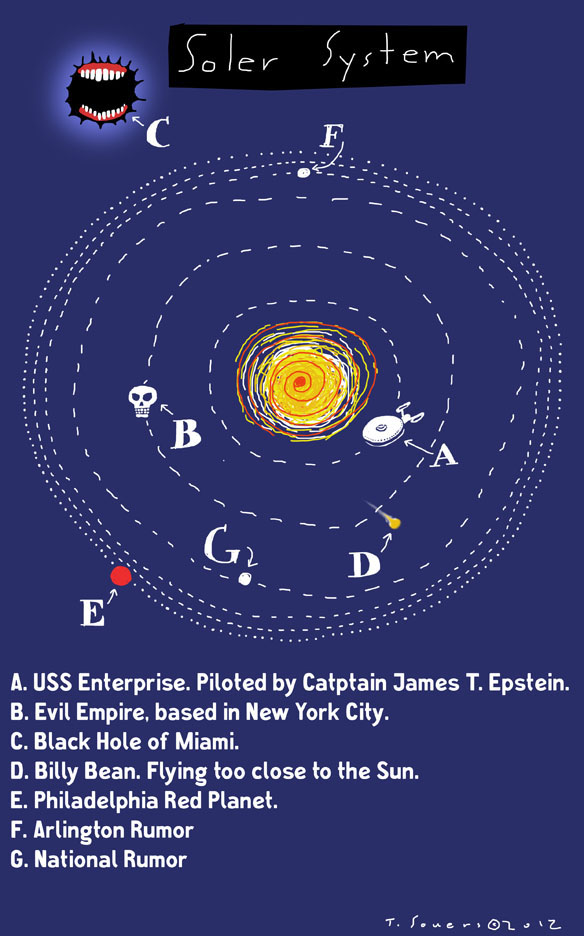 Then, we all learned. 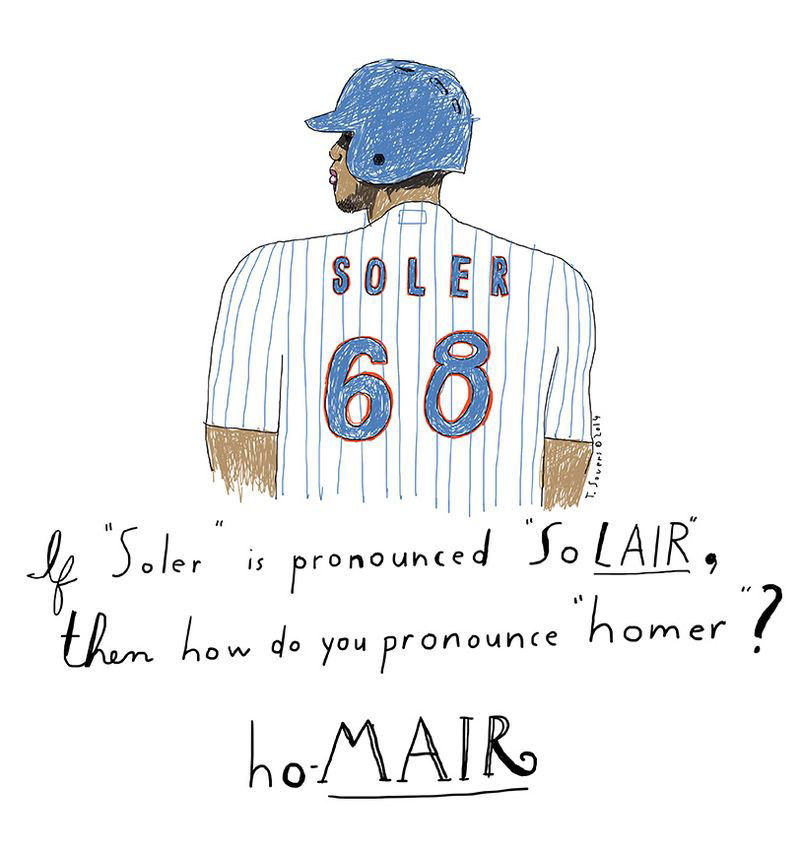 But my fav memory of Soler was in 2014, when I went to St. Louis to watch the Cubs play the Cards before St. Louis really knew what was going on in Chicago:

To the Cardinal fans, you say look, its our newest prospect brought up just the other day, Jorge Soler.

Later, he'll hit another one out that goes so far so fast that nobody even moved before it landed in the 2nd deck.
The Cardinal Fans say who is that guy again?
You say you might want to remember him.
Jorge Soler. 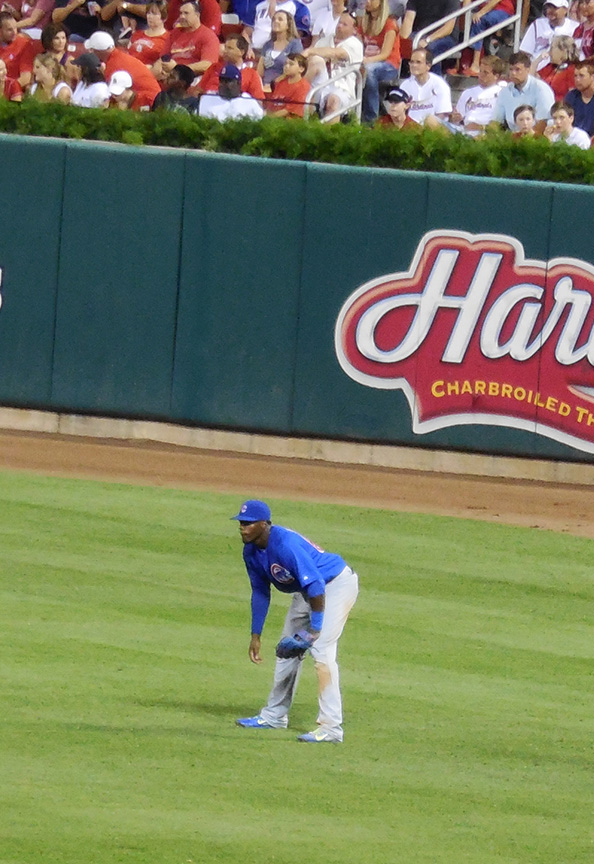 But, as Jed Hoyer said, it's a baseball trade.
Good for us, good for them, and I think good for Jorge.

Hey listen, I've been working my ass off, even if you didn't know it.
We're starting a new agency, there's been tons of work, and in between there... a number of you have asked if I could do some prints.
So I'm doing them.
Getting an Etsy store to open probably in the next couple days.
This blog, I've been at it since 2003 even if I didn't start it til 2007.
And one day art will probably be how I make a living, so what I have to offer is good stuff, printed on the same kind of really good paper I do watercolors on, by a really good printer with really good inks.
Limited edition, signed and numbered.
Coming soon.