Will the NL MVP be the Cubs Kris Bryant? 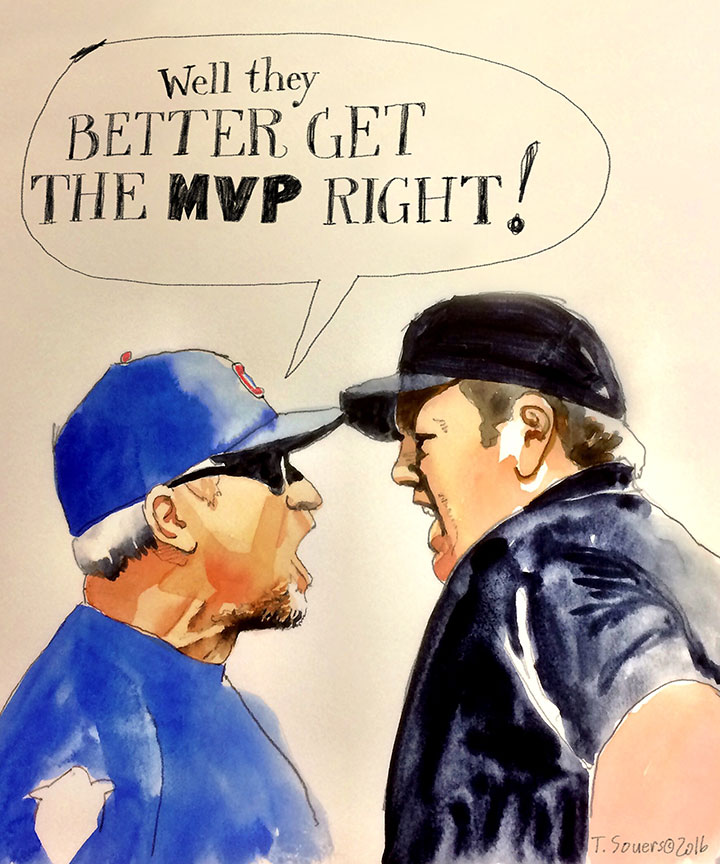 After Joe Maddon missed out on Manager of the Year... then Kyle Hendricks and Jon Lester missed out on the Cy Young... COME ON MAN.
The MVP has to be Kris Bryant.
It actually cracks me up, now that the Cubs have won the World Series... ho hum Joe Maddon's just a runner up manager now.
The job he's done with these kids is incredible.
How they all came together as a team.
How no egos grew larger than the team.
I'm still amazed.

Anyway, slammed as usual and no time to write up a whole thing here, but...
KB better be MVP.
All I gotta say.

The effect of the World Champion Cubs on kids and baseball. Gotta be good. 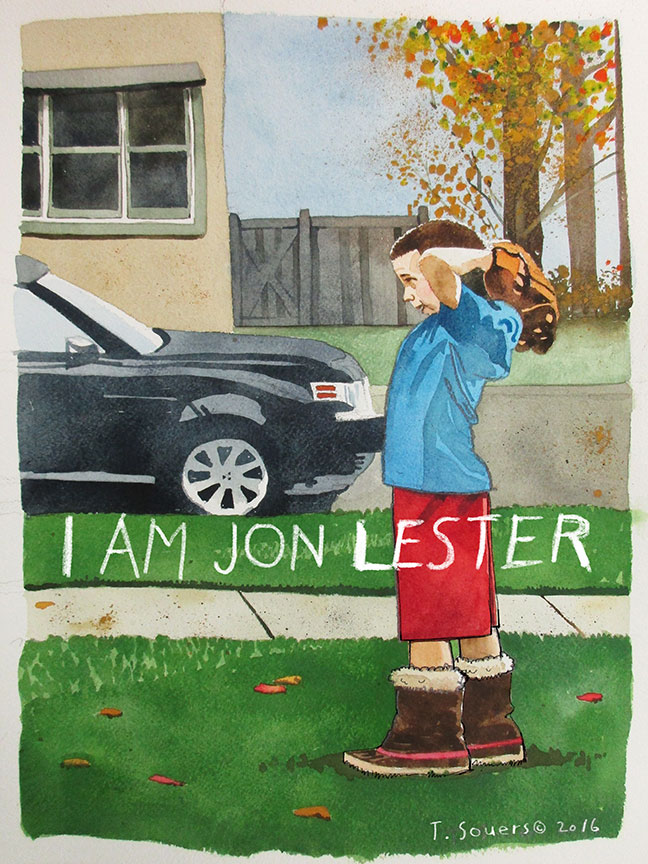 The other night I was as usual really busy and I got an email from my good friend Marnie.
We work together so yada yada it was about a meeting but she also included a picture that I did this painting from.
That's her son Tait, mid-windup, shorts and winter boots, in November.
I guess before this last season (you know, the one where the Cubs won the World Series), he was just sort of a baseball kid.
Now?
He chose Jon Lester as his favorite player, and... maybe he'll want to be a pitcher.

Isn't that so incredibly cool?

I wonder how many kids got the Fever this year.
How many decided that the tired old slow moving game of baseball might be something to try out.
When I was little, it wasn't really anything you gave a second thought to.
SCHOOLS OUT LETS PLAY BASEBALL!
It's what you just did.
Any more, not so much but... maybe that just changed a little.
Because of our favorite team.

The reason I love baseball so much is that you don't have to be the tallest person, or the fastest person, or the strongest person.
You just have to be good at baseball.
The player who's probably gonna win the AL MVP, Jose Altuve, is 5' 5".
(Yeah he's an Astro and you know how I feel about the Astros but whatever.)
The photographer who took our 6th grade class photo (a loooong time ago) had the girls kneel in the foreground and the guys stand in the background.
You can barely see me peeking over the little girl in front of me.
But... I still played baseball and had all the dreams.
Baseball also evolved.
Today, it's inclusive.
You can be any ethnicity, speak any language, and if you're good at baseball then you're welcome to play.
And the best team in baseball happens to be a pretty diverse group.
Inspiring?
Hell yes.
Probably somebody knows actual numbers, but I just like thinking it.
How many kids just picked up the game.
How many Taits are saying, "I'm Jon Lester!"

Thanks Cubs, and Marnie thanks for sending the picture and story.

PS: Notice that I didn't say who I thought would be the NL MVP?
Jinxy!
But I can say I bet whoever it turns out to be wears a red "C" on his blue hat.

PS PS: Still working on making prints and soon as I know you'll know. I'm trying to do them right - with archival paper and inks that won't fade. Limited number. All that. So hopefully soon and thanks for your interest.

Cubby Blue art on the wall. 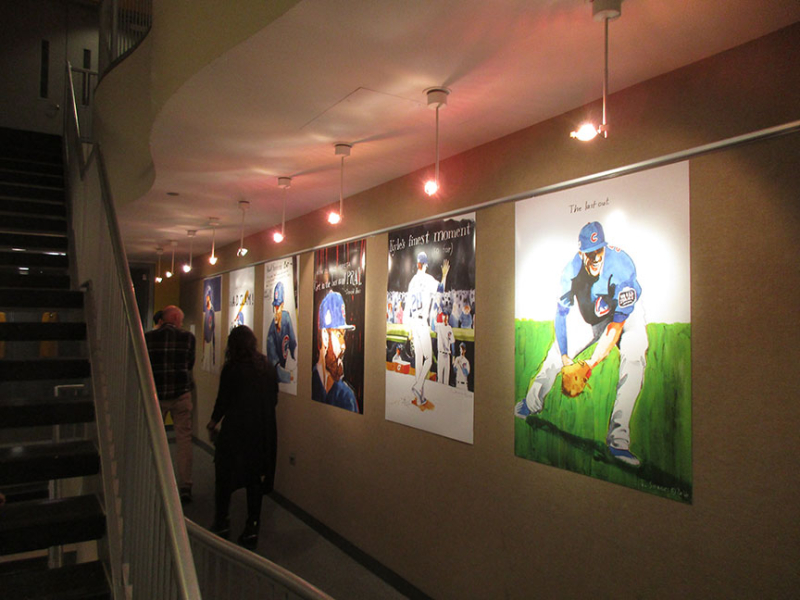 Hi.
I came back from a shoot, exhausted.
Went to my office, went to meetings... it's just really busy and I'd forgotten that someone asked for hi-res copies of some of the art from the blog back before I left.
One of the meetings I went to was a lunch meeting - a big one - and on the way in someone said that my art looked great on the wall.
What?
Oh WAIT!
Our office has multiple floors, I'm on 39.
Some of the people who conspired in this thing walked me up to 40, and there on the wall are gigantic reproductions of some of the most recent paintings.
It's not easy to describe what that feels like, unexpectedly seeing your stuff up big on a wall.
Ahhh what am I saying - of course it's easy.
IT'S SO COOL!!!
(Thanks Paul and Max and Di and Andrea and Lauren and Dave and DDB!)

So how you doin'?
Has it really sunk in that the Chicago Cubs are the World Champs?
It really really really takes some getting used to.
Management's vision couldn't have paid off more - we've all gotten to watch this team change from kids to stars to champions to guys singing on Saturday Night Live.
Incredible.
If the Commissioner's Trophy were treated like the Stanley Cup, I imagine a ton of us would have already have touched it and had a picture with Ben Zobrist or Anthony Rizzo.
And now the... we all knew it was coming but the heartbreaking retirement of Dave Ross... who's gonna replace that guy?
You know pretty soon they're going to trade somebody or maybe more, too.
Getting ready for that in my head.

Okay so here's the deal, and I don't really like going into depth about work here so as simply as I can say it... I'm going to be really really busy in the coming months.
Have patience - I'll still be around.
And I also hope to have prints very soon.

The Cubs win the World Series, Kris Bryant, and the moment it all changed. 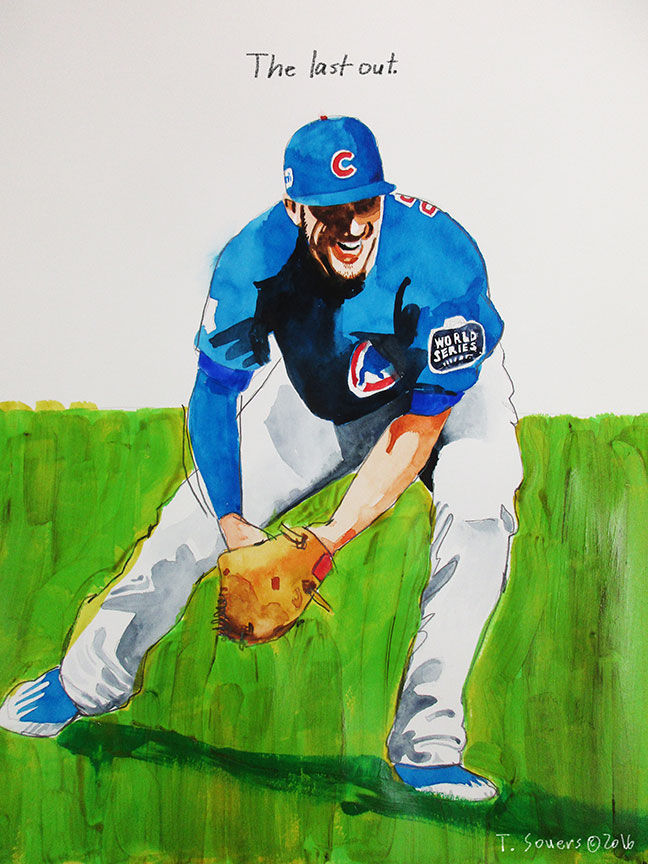 It's the bottom of the 10th.
The Cubs are up by a run on the Indians in the last seconds of the 2016 World Series.
Joe Maddon has gone through every weird ass pitching change in the world, and after using up every last drop of every last pitcher he trusts, he puts in Mike Montgomery to get that last out.
Everybody in the country is bleary-eyed and staring with open mouths at this moment.
Michael Martinez, who was put out in right an inning before as a glove, is at the plate.
Montgomery throws a hook for a strike.
Martinez doesn't look like he should be the last gasp for a really good Cleveland team.
He just looks like somebody in a... baseball outfit (I didn't say "uniform" on purpose).
Montgomery throws another hook, and Martinez hits a dribbler towards Kris Bryant that's so badly struck it's just.. that side of a bunt.
It's moving so slowly that Joe Buck actually thinks Martinez might make it to first and says something like, "That's going to be a tough play".

You know how when you look at the sun and close your eyes, the image sticks behind your eyelids?
That happened next, only instead of the sun it was Kris Bryant.
He's smiling - goofily - ear to ear.
He scoops up the ball and throws.
Martinez is out and the Cubs win the World Series.
My head pops like a bubble, but I can't get Bryant's smile off my retinas.
He had such confidence in his baseball ability that he started smiling before he made the play.
By a couple seconds, he cheated the thing that has ruined our lives for all our lives.
I swear all the Cub things, the bad things, flashed in front of my eyes while the ball was taking it's time getting to Bryant's glove.
OHHH NOOOO HE DROPPED THE BAAAALLLLL OOHHHHHHHHHHHH NOOOOOOOOO said Ron Santo.
MOISES ALOU IS POINTING TO A FAN IN THE STANDS said Steve Stone.
THERE'S A BLACK CAT ON THE PLAYING FIELD said somebody in the stands in '69.

But then I see Bryant's smile, and I think this is where it all changed.
The Cubs really aren't that team any more, and they knew it way before me.
They're the World Series Champion Chicago Cubs.

And we are finally free.

ps: Gonna take some time off. thanks for visiting!

Cubs win the 2016 World Series, and everything is different now.

I wish you all the joy in the world.
You deserve it. 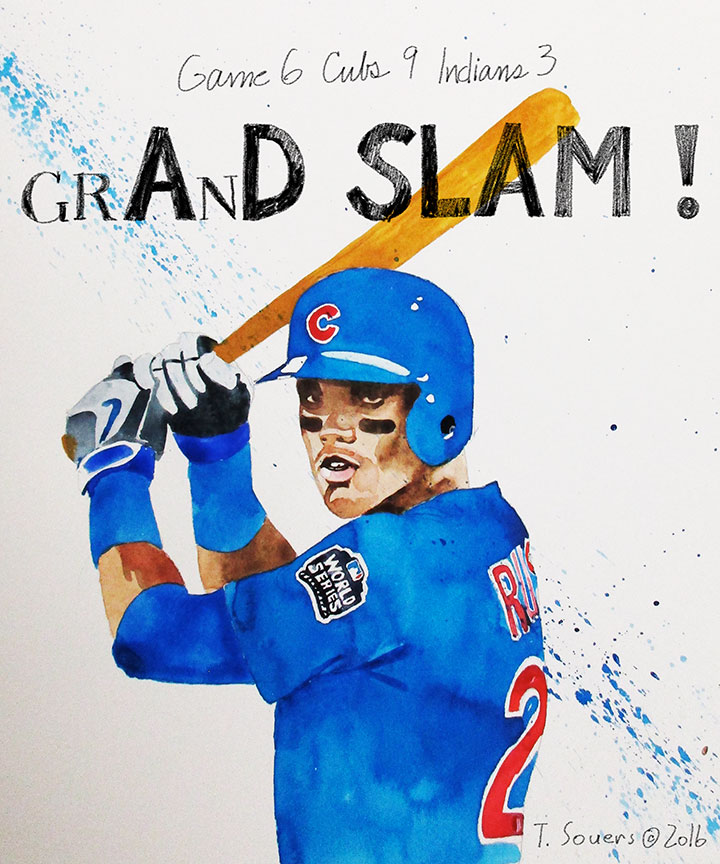 I have a terrible cold that I"m choosing to cherish today.
I let the jerk who sped up past everybody in the lane you're not supposed to do that in cut in and merge in front of me.
I held the door for someone carrying a buncha stuff even though they were a mile behind me.
It's a good day to be in a good mood and spread some good.
Which brings me to the Chicago Cubs.
God, are they good.

Jake Arrieta struck out 9, he was freaking awesome last night.
And he's already volunteered to throw this evening should Joe Maddon need him.
In the very first inning, Joe West tried to be Joe West on a pitch that should have been strike three on Francisco Lindor.
It was a perfect pitch that came back over the tip of the inside of the plate.
Ball.
But Jake didn't even blink - he struck out Mike Napoli instead for out no. 3.

But last night will be remembered for the Cub bats.
2 out in the top of the 1st, Kris Bryant hit a homer.
430 something feet, and when it landed it sort of caused an earthquake.
Because then there were 2 aftershocks when Anthony Rizzo and Ben Zobrist each nailed very hard hit singles and Cleveland pitcher Josh Tomlin immediately lost confidence in his abused curveball.
Then Addison Russell knocked in 2 when Cleveland outfielders Lonnie Chisenhall and Tyler Naquin apparently couldn't hear each other and expected the other to catch Addy's popup.
Cubs 3 Indians 0.

In the 3rd Kyle Schwarber walked, went to 2nd on Rizzo's single, and then to 3rd on Zobrist's single.
Terry Francona took out Tomlin and matched Danny Otero with Russell, who Grand Slammed it to center field and became the youngest player to hit a salami since Micky Mantle.
I can hardly type that.
Straight over the center field wall and down a tunnel.
Someone getting a hot dog said, "Hey what's this baseball doing here?"

The Cubs seemed to have already creamed the Indians and you or I probably would have let Arrieta go for at least that last out in the 6th, but he'd given up a couple earlier and then walked Chisenhall.
Joe put in Mike Montgomery to end the inning.
When Roberto Perez walked and Kipnis singled in the 7th, Joe pulled Montgomery with 2 out.
Put in Aroldis Chapman.
Man what a buncha chatter after that.
Joe Buck and John Smoltz got everybody's opinion but Chapman's, and I turned on the radio.
(I heard this morning that after the game, Chapman said he wants the ball until his arm falls off.)
So Chapman gets the last out there, gets 3 outs in the 8th.
In the top of the 9th Anthony Rizzo pulled one out of the park to right with Bryant on, and the Cubs were back up by 7.
Bottom 9 Chapman walks Brandon Guyer and in comes Pedro Strop and Travis Wood to finish it.
Cubs 9 Indians 3.

Couple things.
Jason Heyward's throw and impossible catch were HUGE.
Javy Baez may be changing how we judge greatness in the infield - he's evolving it to another thing.
Lastly, Kyle Schwarber's skill, patience and power batting 2nd changes everything in the lineup.
Fowler, Schwarber, Bryant, Rizzo, Zobrist, Russell.
That's the movie where they have ALL the monsters.
I cannot wait for tonight.
But in the meantime, this is the BEST cup of coffee I've ever had.