« Cubs 6 Giants 5. Let somebody else have a broken heart for a change. | Main | Miggy Montero's Magic Moment in the Full Moon Game. Cubs 8 Dodgers 4. »

Welcome to Beautiful Wrigley Field. Home of the 2016 NLCS. 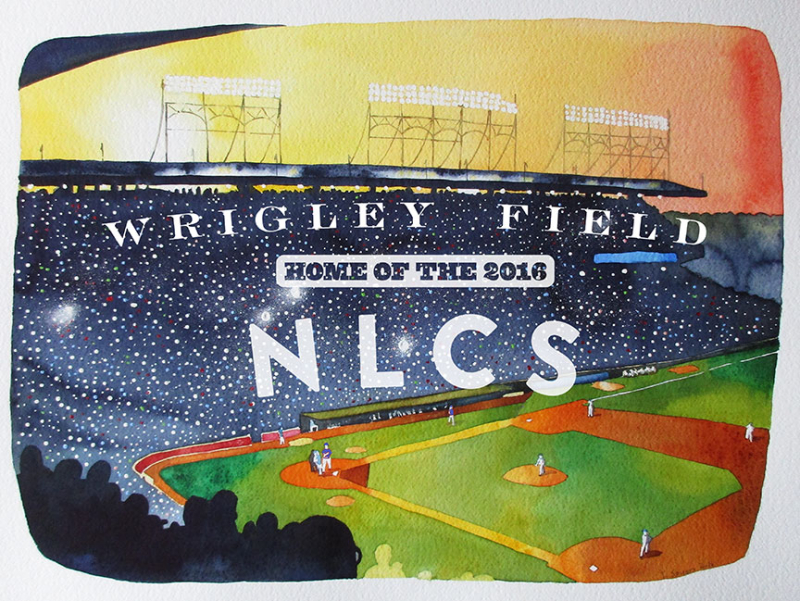 When the Cubs finished their incredible comeback vs the Giants last week, and Pat Hughes said that the National League Championship Series would begin in Chicago, I rolled around on the floor making Three Stooges noises.
The "WHOOP WHOOP WHOOPs" and the dog growls and the "NUCK NUCK NUCKs".
I sort of did the same after the Dodgers beat the Nats using their 2 best starters in one game.
It's awesome that Clayton Kershaw had to come in and got a save.
And I'm hoping that whatever hotel the Dodgers stayed at had an obliging bartender who kept them up as late as possible.

I flew into Phoenix yesterday, took the Arizona Shuttle up to Prescott, and now I'm here.
Tonight my dad and I will be 12 years old again.
I'm sure that my neighbor Garry the Horse Cop will be clomping around Clark Street, and the crowd will be nuts.
But there's no place I'd rather be than here tonight.

This watercolor - I actually was commissioned awhile back to do a big one by some friends in New York.
All the dots on there were put on with a busted toothpick dipped into opaque paint on top of the watercolor washes.
(And Rich and Kathleen you'll note I digitally changed uniform colors to make it appropriate for tonight.)

Nothin' much to say except I CAN'T WAIT.

Beautiful! I can just imagine how stunning your water color is in real life. I keep thinking about your W-L tiles too. I certainly hope you turn that into a poster and sell it. That would be one-stop Christmas shopping for me!

Pretending to do things around the house now, but I'm really just waiting for the game to start. Enjoy your time with your dad!

Can the hours please pick up?
Did you see Kershaw going tomorrow night?
CRAZY.

I agree with Donna, that is a beautiful rendering of Wrigley.

Hendricks vs Kershaw tomorrow. I feel good about our chances!

My wife gave me one of those hideous Cubs Hawain shirts - the ones with a hundred little logos and drawings on them. They're like a Ditka sweater, only for the Cubs.
Anyway, I love it of course, and wore it in downtown Prescott yesterday.
SO MANY people were like, "Hey cool shirt."
I'm gonna need to calm down.
Last night there were a herd of javalina outside my dad's house.
I thought there was a landslide they were so loud.
Now, I'm sleep deprived and crazy with last night's excitement.
GO CUBS!!!

BTW, your choice of viewing venue and company is way, way cool.

Hi Rich.
Its SO awesome. Were having a blast.