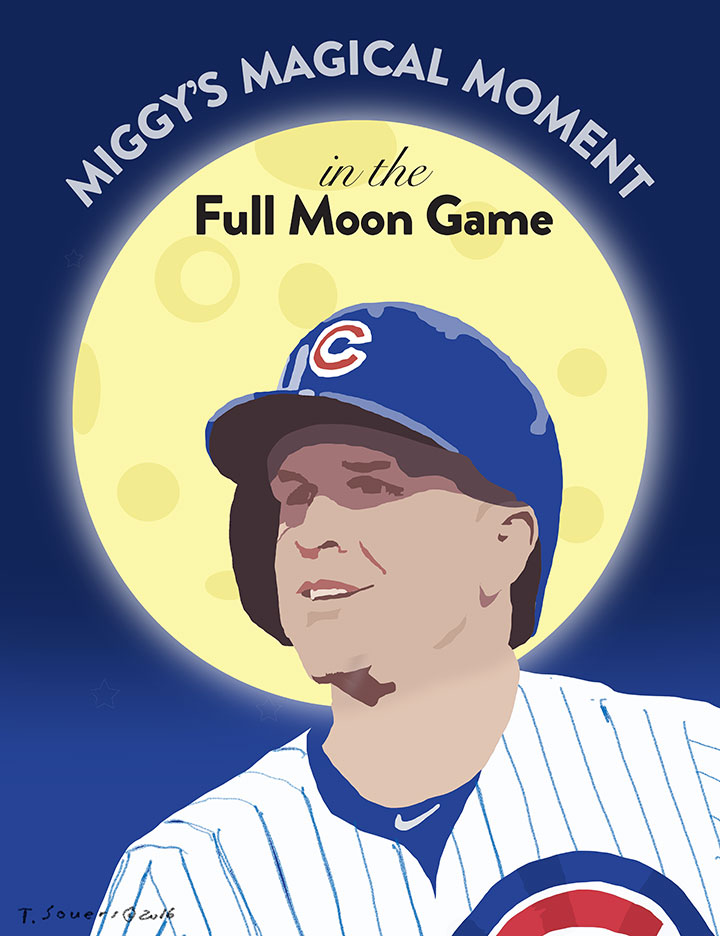 This was the kind of thing you could write a whole kid's book about.
Miggy Montero's bottom of the 8th grand slam in the light of a full moon.
I didn't know that was going to happen (the full moon I mean).
I'm out here in Prescott, AZ.
And in the room we were watching the game on, a full moon rose up in the window.

Turned out to be magical.
Montero's been fighting a bad back all year long.
When I read it had flared up again, I thought they might leave him off the roster for the NLCS.
When he came up to bat... you know anything can happen with this guy.
He missed Joe Blanton's 2nd pitch that was right over the middle of the plate.
I thought "anything" would be a strikeout for sure.
The next pitch, however, went out the park.

Full moon stuff:
Javier Baez.
He was SO caught off 3rd, which isn't unusual for him - he's nuts on the basepath.
(Later he'd say there was a safety squeeze on)
Instead, he just... goes for it.
In the books, it reads he stole home.
The 2nd time that ever happened in a playoff game by a Chicago Cub (the first was a guy named Jimmy Slagle in the '07 World Series.

Joe Maddon taking Jon Lester out after only 77 pitches.
That seemed so weird when it happened and Lester was obviously pissed off.
But now... I guess I'm happy he didn't go 8 innings or so just for the sake of his arm.

What a game.
What a way to start off the series, so 2016 Cub-like with SOMEbody picking up the team.
Tonight it's Clayton Kershaw vs Kyle Hendricks.
Sometime Kershaw's lack of rest is gonna catch up, and I hope it's tonight.
And by the way, the moon will be full again.

Here's a full moon tweet from the news in Phoenix this morning: 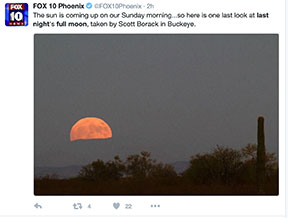 I don't even know anymore. I think I was speechless during both Javy's stunt and then Miggy's grand slam. My mouth was open and that's about it. Is this even REAL? The upper deck was shaking when Miggy hit it out.

Still is.
I can't stop thinking about it.

WERE YOU THERE?
In those seats near where I ran into you at the 5-2 Cub W over SF?

Sitting in the hospital waiting room while my husband has hip surgery. I told him it would give me something to do while I waited for the Cubs game to start. :)

It must have been crazy.
What a cool grand slam!

Sounds like a double-waiting room thing to me, Donna.
But.. hip surgery.
Ow.

Since when did the whole world turn into Cubs fans? https://soundcloud.com/sports3podcast/chicago-cubs-world-champions