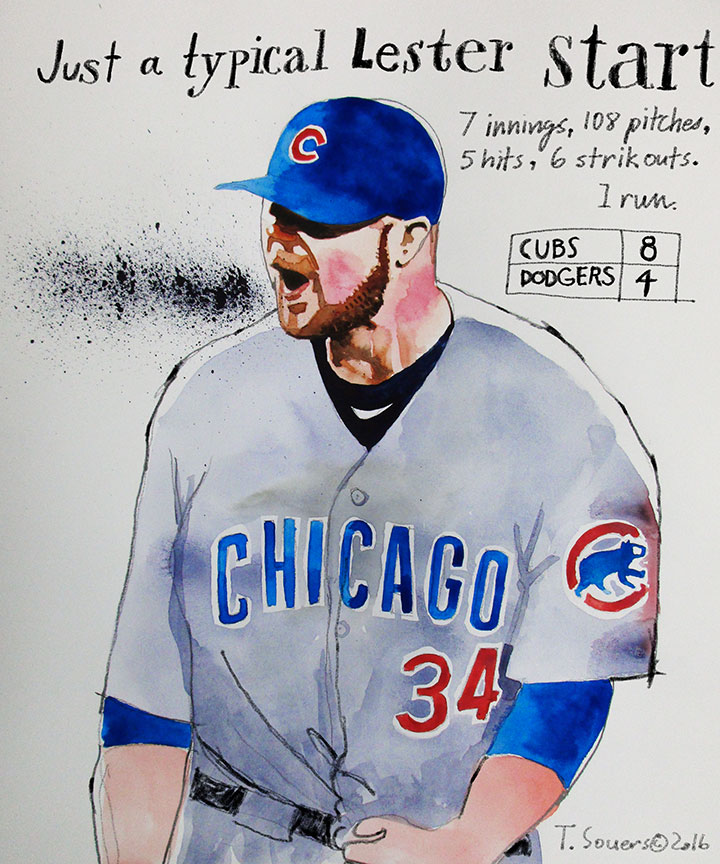 One thing that amazes me about Jon Lester has nothing to do with his arm.
It's his head.
Like in the 3rd inning with Corey Seager up, and come on that is one impressive kid... Lester's got him at 2-2.
Moments before, Justin Turner had hit a single and stole 2nd on him - Ross mishandled the pitch Turner went on but there would have been no chance.
And Lester, he throws I mean the perfect strike 3.
I think Smoltz called it a "front door cutter" - Seager's bats lefty and it went right over the inside corner of the plate and Seager didn't have a chance.

I saw it, you saw it.
DID YOU NOT LOSE YOUR MIND!??
DIDN'T YOU WANT TO STRANGLE SOMETHING!!!

Jon Lester just picked up the ball and threw a slider in the dirt for strike 3.

He's so focused.
Mature.
He's such an incredible leader.

Anyway, he was just. so. good.
Bunts...
Loved Lester's "see what happens" glare into the Dodger dugout after he bounced a throw to nail Pederson's bunt attempt.
When Rizzo bunted for the single against the shift, it's like a free base.
When Adrian Gonzalez tried to bunt in the bottom of the same inning, it was desperate and just a bad idea.

Otherwise, the bats.
Addison Russell, to me he's had the two biggest hits in this series so far, each clutch, each opening the door for the Cubs, each a 2-run homer.
Kris Bryant's liner over Joc Pederson's head looked like a wiffle ball, didn't it? When a Bryant ball is hit that hard, it doesn't pay attention to normal laws of physics.
And Ben Zobrist - those are gonna start falling somewhere other than somebody's glove. In the meantime, keep taking the walks, dude.

I gotta run.
But now we're here, right?
One more.
If I start thinking about it... I mean I'm already a complete wreck.

Thanks, Greatest Summer Ever.

I like the black fuzz coming out of Lester. He was foamy quite often last night, thanks to the crappy umpiring. Greatest Summer Ever returns to Wrigley Saturday night. Seems the Dodgers feel Kershaw and Jansen is a no brainer. I say nay nay.

They're not talking about Kyle Hendricks.
I love this matchup.

Funny sports commentary regarding the Cubs? We love it
https://soundcloud.com/sports3podcast/chicago-cubs-world-champions

I have this extremely loud and obnoxious family (a couple with two school-aged kids) in the apartment below me, and every time the Cubs do something bananas in the playoffs they absolutely lose it whooping and screaming, and ordinarily I'd tell my landlady about the noise, but I wanted to go down there and hug them all.

Every time Addison Russell hits one of those dingers, it's a semi-religious experience. The Cubs keep punching me right in the emotions over and over and over. Chills, man. Chills, goosebumps, happy tears, and sweet, glorious anticipation! May the Cubbernaut keep surging along!

Hi Soundcloud.
There are bad internet issues today.
For instance, I can't get on Twitter.
Anyway, your link is experiencing the same problem.
I'll look later.

Oh my god that's EXACTLY what's happening with me, only I'm like your guys downstairs.
Both Russell bombs.
Instantaneous and earth shattering noise.
If any other neighbors are reading this, I apologize.
I can't help it.

Nervous. Nothing else to say.

Pardon my language, but it must have been a day like this when somebody invented the saying, "shit or go blind".
I don't know WHAT to do.
I just did the weirdest post, I think because I don't want to think too hard.

The teacher in me loved your post!  Not as easy as you make it sound.  I keep walking around the house making up things to do.  Gonna open up the cookbook and find the perfect play-off meal for tonight.  And then what?  Beer, wine, margaritas?  Champagne?  Cant wait.  Best Summer Ever!