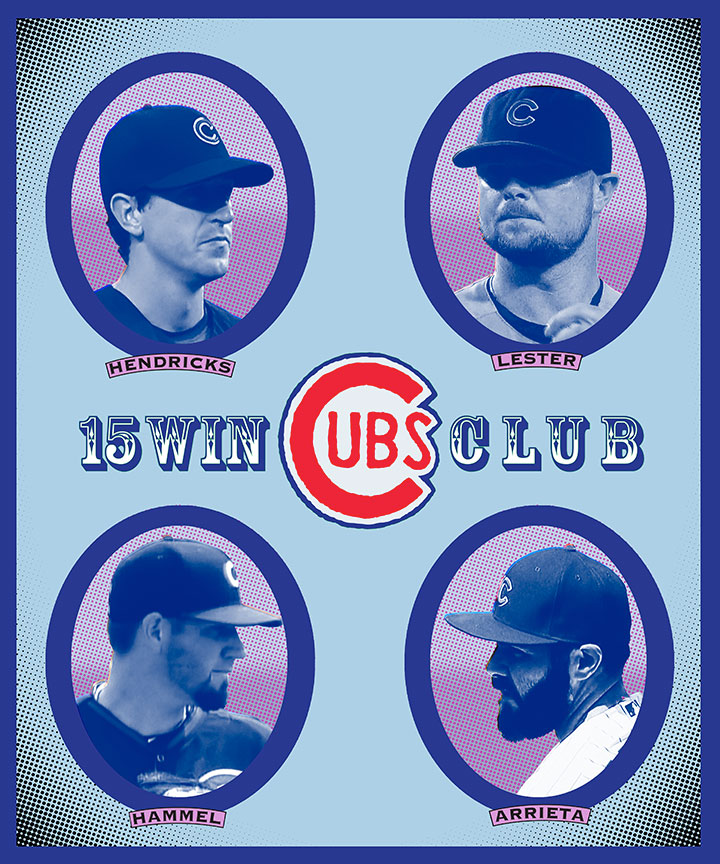 Incredible.
With Jason Hammel's 5-2 win over the Reds yesterday, the Cubs now have four starters with at least 15 wins.
Hammel, Arrieta, Hendricks and Lester.
Look at this: 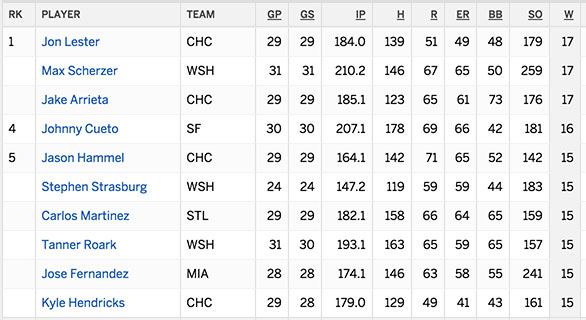 It's almost impossible to keep up with the milestones that the Cubs are creating this year.
But there really isn't much drama, is there?
Well, I mean which Cubs are going to make the playoff roster is a biggie (like probably Hammel isn't, but it's awesome that he's making the decision a tough one).
But it ain't like we're holding our breath and praying for them to get in the playoffs.
That particular bit of drama belongs to the Cards, Giants and Mets.
And the Giants might be about to self destruct, losing to the Dodgers 1-2 and having Madison Bumgarner try to get in Yasiel Puig's face.
That's 3 L's in a row for them, while the Cards have won 3 in a row (a teeny bit of difference playing the Rockies instead of the Dodgers).
And the reason I haven't been posting is I had to go work in NY, where Jacob DeGrom and his bum elbow just pulled out for the rest of the year, and Noah "Thor" Syndergaard got hammered by... the Atlanta Braves yesterday.

Okay.
Lester tonight at 7.
Go Cubs.
And the Bears?
I saw Soldier Field out my window last night.
So glad I missed it. 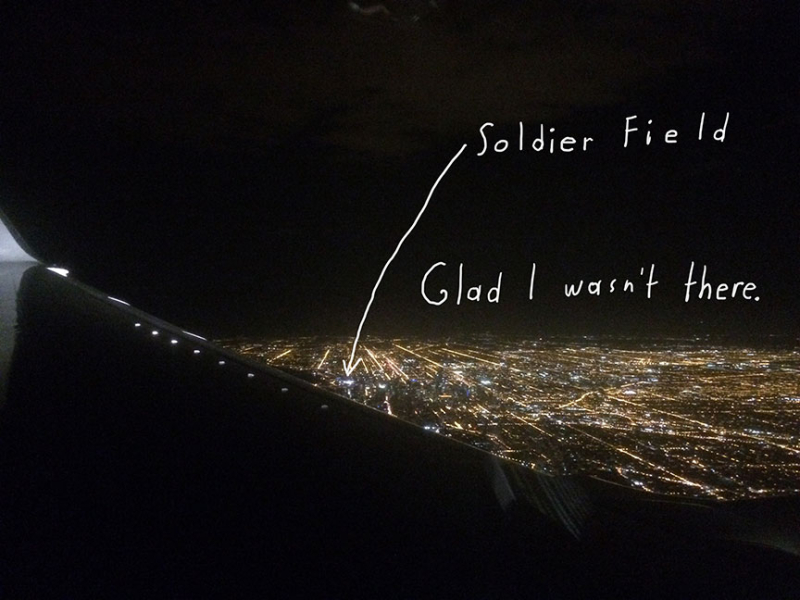 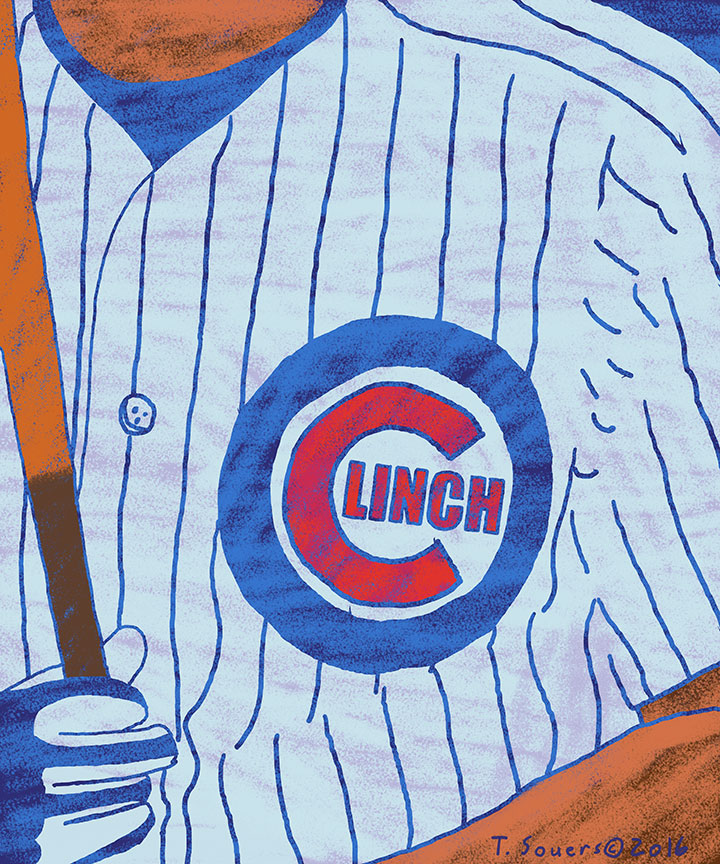 I was theeeees close to heading down to anyplace on Clark close to Wrigley just to soak it up.
Instead I watched, the Cubs lost, I woke up at 3 and checked my At Bat app to see the Cardinals had lost to the Giants 2-6.
Didn't wake anybody up.
Did a little "yessss" and went back to sleep.

Such a drag losing to the Brewers, but whatever.
Mike Montgomery went 6 and gave up 3, still above expectation for him.
Justin Grimm seemed to feel pressure and coughed up the winning runs, but lots of guys were sort of skittish.
Addison Russell with a couple throwing errors, and Willson Contreras pinch hit but did not look comfy at the plate...
But these are still kids and, you know... get those jitters out the way now.
Jorge Soler smacked the bejeezus out of a Jimmy Nelson pitch for a glorious home run.
Soler... you know that guy has as many homers as Buster Posey or David Freese in half the at-bats.
He's got 54 hits and 12 of 'em went out the park.
And Jason Heyward had 2 doubles.
I know.
But I love that guy, his D is insane and inch by inch he'll bring the bat around.

So... we were robbed of watching that clubhouse celebration but it's now a done deal:

The Chicago Cubs are

First time since... well never mind I don't really like remembering that year.
Lets just say they clinched for the first time in the Theo Era, or Joe Era.
My wife bought me one of those really horribly-patterned Hawaiian-style Cubs shirts, but I don't care about horrible - it's awesome and will get plenty of wear over the next couple weeks.
It's kind of a Ditka sweater for the summer.

Okay it's a Friday 1:20, the greatest time for a ballgame, with John Lackey on the mound.
And... maybe they'll pop champagne today anyway.

Hey I just saw the latest Cubs commercial.
THAT'S MY OFFICE IN BETWEEN THE U AND B ON THE AON CENTER! 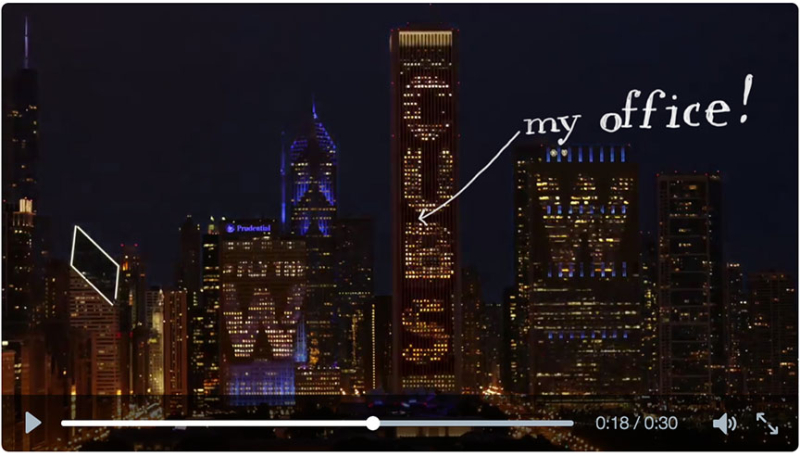 Cubs win 7-zip, can clinch tonight, and the fork gets closer to the Cardinals. 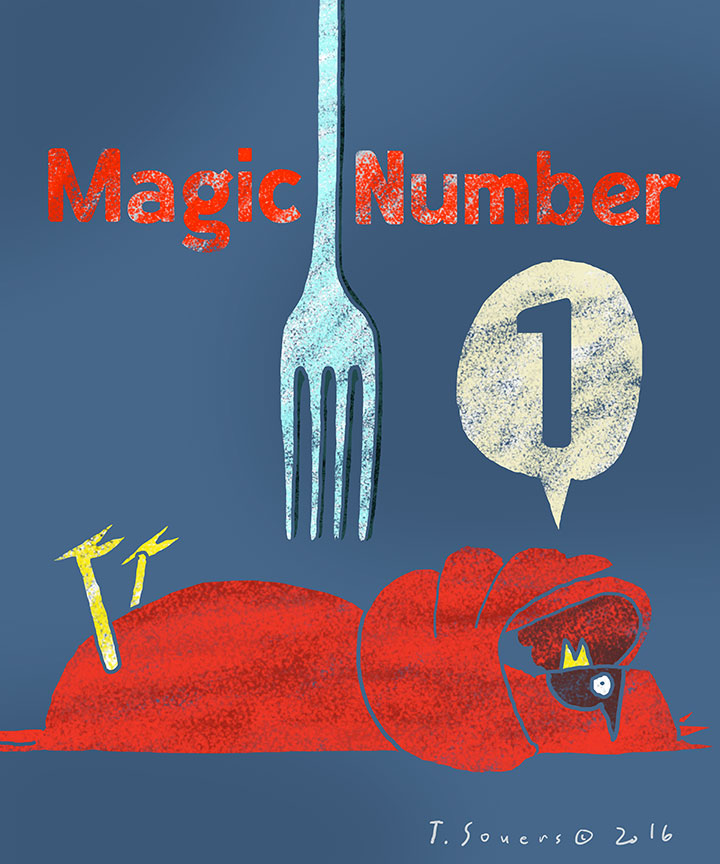 Wow is Jon Lester hot.
I mean, he's been hot all year so whatever, the games just feel bigger lately.
He held the Cardinals to 3 hits and a walk over 8 innings yesterday while the Cub bats got to the Cards best pitcher, Carlos Martinez, for 8 hits, a couple Anthony Rizzo homers and 4 runs.
Rizzo's homers were his 30th and 31st, and couldn't come against a better team.
There's still a couple weeks of regular season left and anything can happen, but does it not feel AWESOME to inch the fork closer to the Cardinals?

Here's a thing you don't hear every day: "Hey Cub Fan, who would you like to face in the playoffs?"
Here's the playoff schedule.
Like I said, there's time and anything can happen but...
Right now, most of the wild card contenders can't get out of their own way.
#1 Giants have lost 3 in a row having just been swept by the freaking Padres and have lost 6 of their last 10.
#3 Cards were #2 before the Cubs took 2 of 3 from them, and they're 5-5 in their last 10.
These two teams begin a dagger series tonight in SF with Wainwright going up against Cueto.
#2 is the Mets who've gone 7-3 in their last 10 face the Twins, Braves, Phils, Marlins and Phils to close the season.
Pretty easy.|#4 is the Marlins, but I just don't see 'em.

But you know what?
I don't even really care who the Cubs play, man.
Whoever it is - any of those teams... bring it on, dude.

Sincerely,
The Greatest Summer Ever. 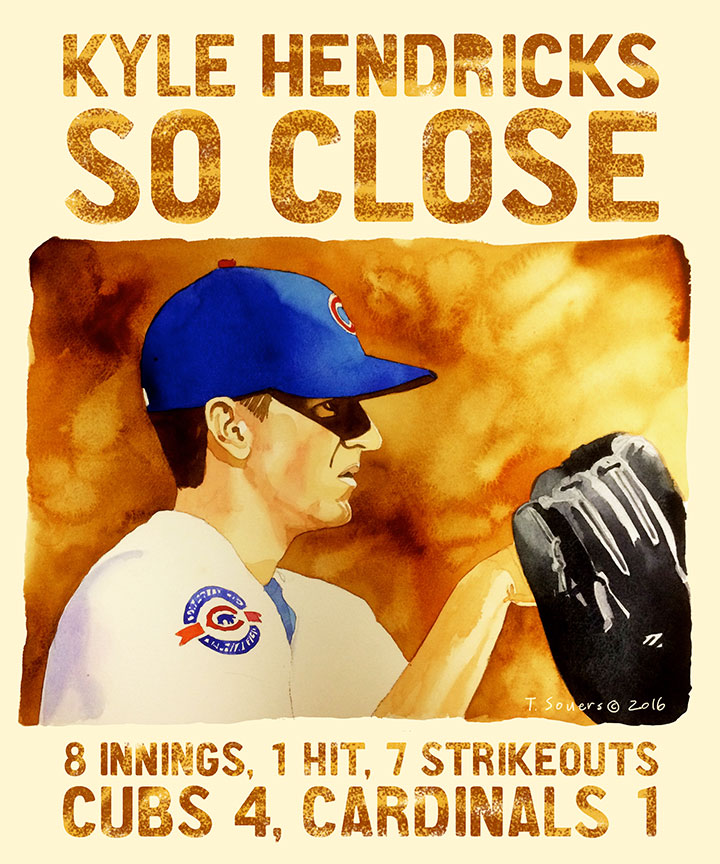 What a performance.
Kyle Hendricks was sooooo good last night.
A no-hitter all the way into the 9th before Jeremy Hazelbaker got ahold of a mistake change and hit it out.
Before then... COME ON MAN, how entertaining and fun and everything you love about baseball was that game?
The gloves were incredible - Addison Russell's sliding scoop and strong throw to nail Jhonny Peralta elicited a couple "Oh My-s" from Jim Deshaies (and a couple "HOLY... okay you don't need me to print that).
And Jason Heyward falling into the stands to catch Hazelbaker's foul ball...
In any other year we'd all be saying man oh man those plays are legendary.
This year, it's kinda the D.
The Cubs are just so impossibly good with their gloves.

Not gonna talk about fat blue who tossed Joe Maddon because... why should I?
Too much good happened last night.
Ben Zobrist had a gorgeous left-handed homer plus a double - Dexter Fowler went 2 for 4 with another dinger - Anthony Rizzo with the big 2-out single that drove in Baez...
And the Cubs win 4-nothin' to bring the magic number down to 3.
(I joyfully tweeted this last night): 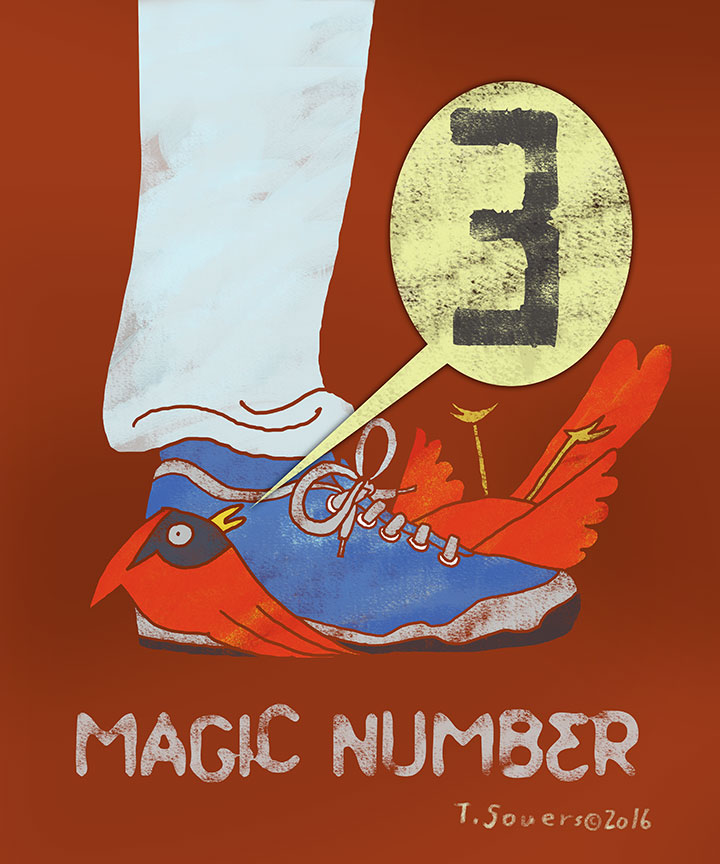 Anyway, just another night from the Greatest Summer Ever.

Cubs vs Cardinals: don't let up. 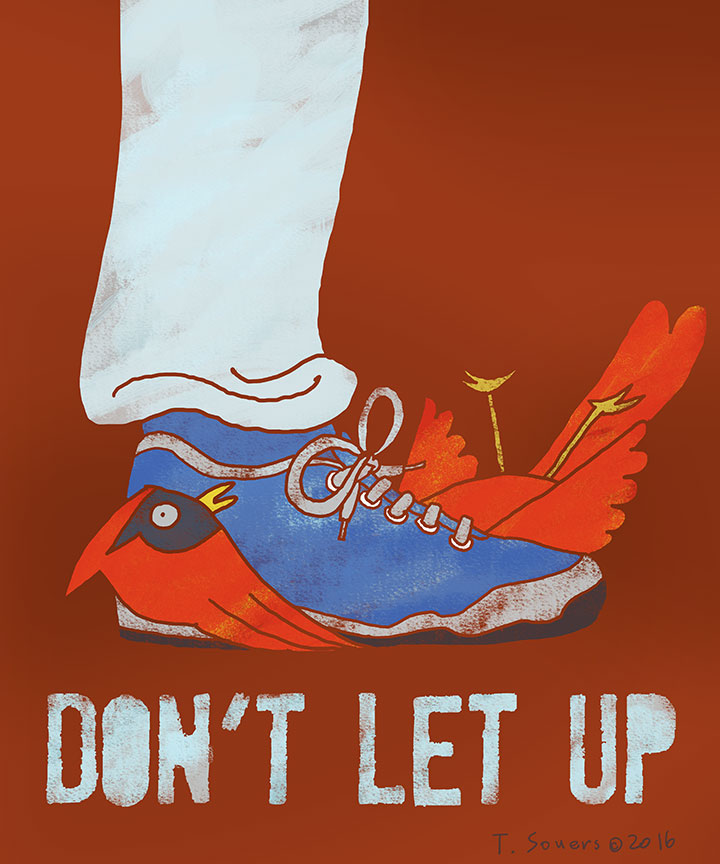 Take a step back and look where the Cubs are.
They have a 6.5 game lead on the entire league, and it's a third of the way thru September.
The Cardinals are in 13th place.
Wouldn't it be nice to squash them now?
To just make their wildcard chances as small as possible during the last 6 games they play together?
Hey no disrespect to Monday Night Football, but at 7:15 I'm turning on the Cubs and leaving it there.
Here's the magic number:

If the Cubs win then it goes down to 3.
If they sweep, they clinch.
In St. Louis.
While I'd love to see them clinch in Chicago, it wouldn't ruin anybody's day to see it happen down there.
So keep your cleats on the neck of the Redbirds, Cubs.
Don't let 'em up.
It'll be Kyle Hendricks for us, Mike Leake for them.
I like us.

Hey. That other sport besides baseball starts today. GO BEARS! 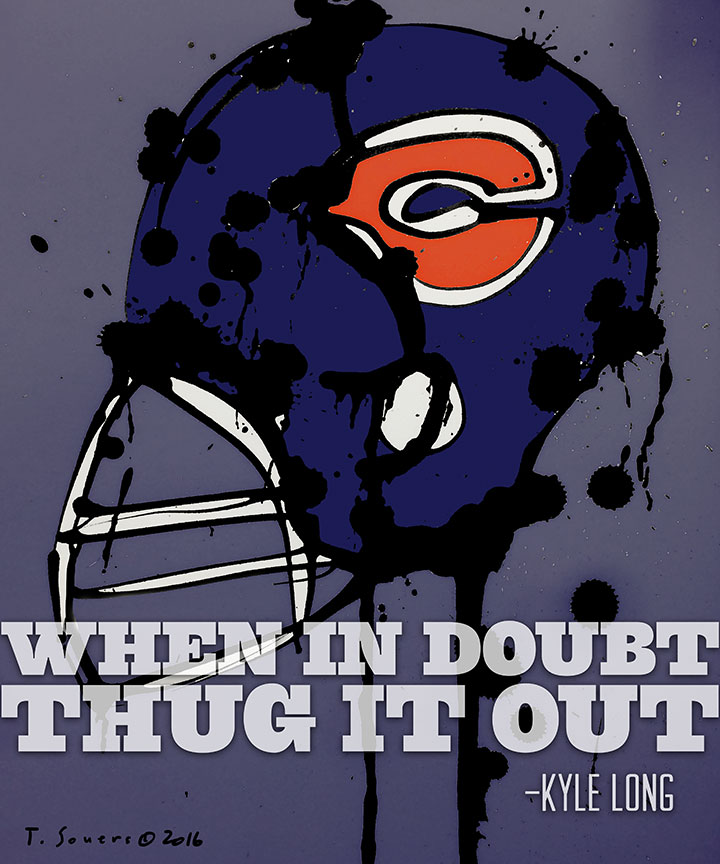 Welllll... not alot of good to talk about from yesterday's 2-hit, 1-2 loss to the Astros.
John Lackey looked pretty good except for the 3 walks which got him, even if he didn't think they were all walks.
But we should all be more concerned with his health rather than results right now, and for that part he was fantastic.
89 pitches, 5 Ks, couple runs... nice.
Justin Grimm is over the bad stomach, and both he and young Carl Edwards Jr. looked very good if not impressive.
The bats took the day off, and I'm not gonna fall into any kind of worry trap over any of this.

Instead, don't you wonder what this Bears team will be like?
They looked HORRIBLE in the preseason, so much so that I already feel sorry for Jay Cutler, and he's not one you'd normally associate with pity.
But today might be different.
If they just play well against Texas, it'll make the idea of the coming winter soooo much more easy to swallow.
All kindsa new guys to watch - no Matt Forte, no Robbie Gould, a rookie center, a last year first round pick reciever making his debut, and most importantly... a whole new D.
Or at least mostly.
That's the part I'm gonna pay the most attention to, because it's the Bears.

I read Kyle Long is gonna play the season with a torn labrum.
Hurl-inducing headline for sure, but Long's quote in the illustration comes from a tweet of his.
Gotta love that.