Theo Epstein signs up for 5 more years with Cubs. 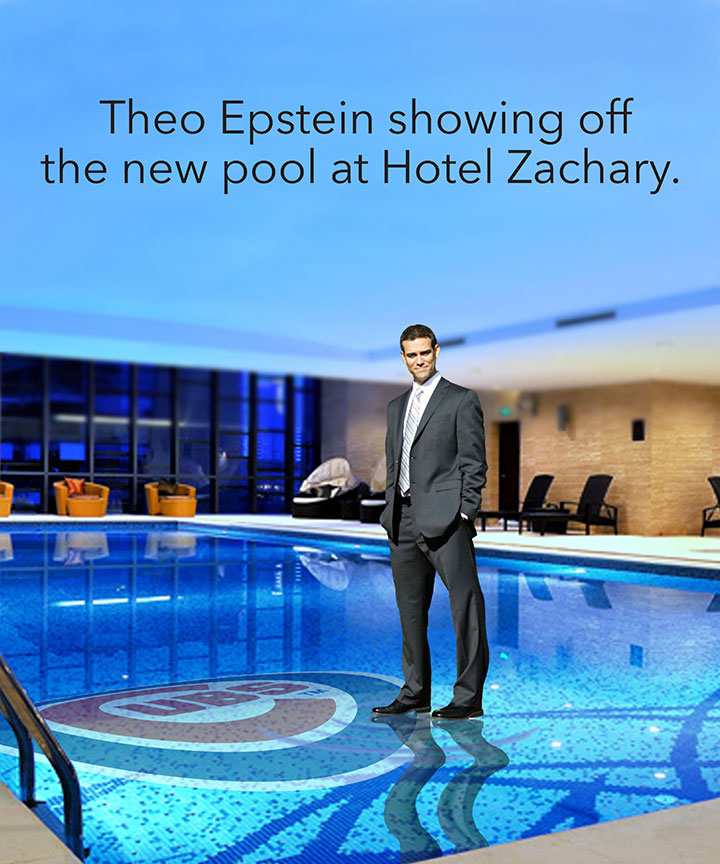 He walks on water, doesn't he?
All the cool stuff Theo Epstein said about Tom Ricketts and family, about "trust, teamwork, and transparency", and about the Cubs is just sooooo amazing.
Sure, you can point to a couple hiccups, but the vast majority of things Theo, Jed Hoyer, and Jason McLeod have done (with the help of the Ricketts) is jaw-dropping.
Right now, the idea that the Chicago Cubs are having a tough time figuring out who is going to be on the playoff roster is almost surreal.
In 2008, that conversation lasted a couple minutes.
In 2016, it's weeks of deep thought with real pressure put on the bubble guys.
Almost every other year of my life, I'd already be talking about the Bears.
Impossible, man.
And now that Those Three Guys have been signed for 5 more years?
Couldn't be happier.

Okay, last night.
I refuse to freak out about Jake Arrieta and the not so great start last night.
I do subscribe to the Lester/Hendricks/Arrieta rotation, but when it comes to Arrieta's starts in playoff games my expectation will be way up there.

Lastly, we had a surgery here the other day (nothing life threatening), and I'm the support guy.
So... apologies for not being so punctual.

PS: I totally made up the pool thing above. I just needed water.
If ONLY I could do an ESPN "This is SportCenter" commercial right now.
Just have any one of their announcers talking with another in one of their offices, and in the window behind them have Theo walk across a pond.
Free idea, guys who make those spots. 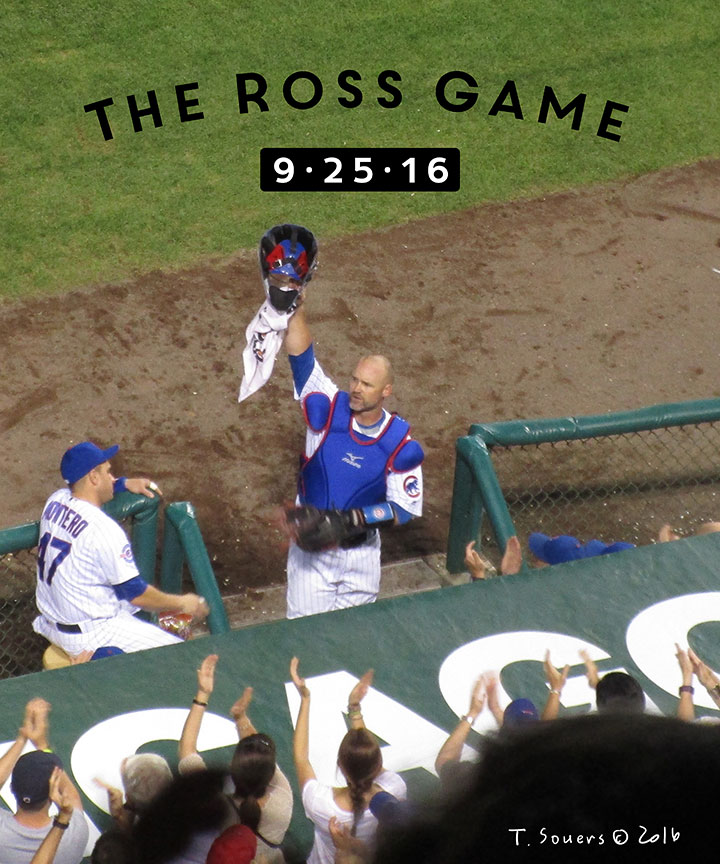 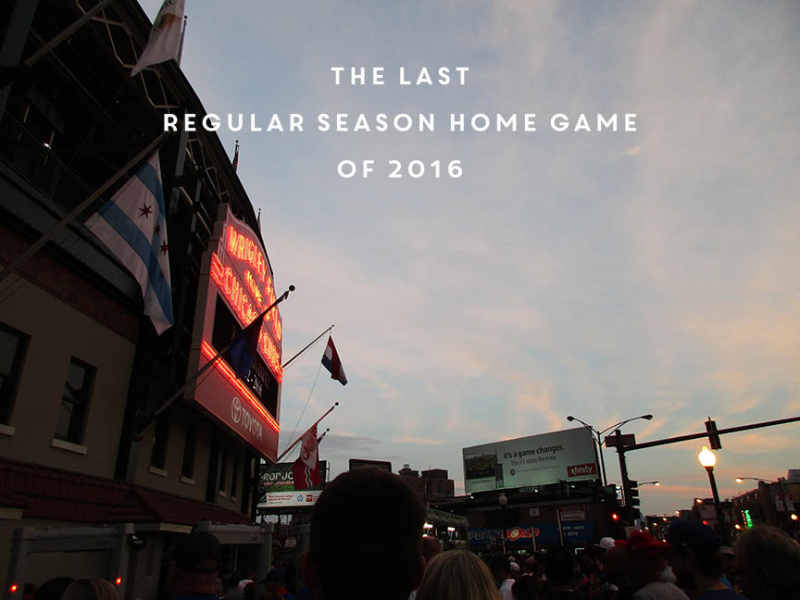 What an emotional, sad, magical and uplifting evening at Wrigley Field.
The horrible news we all got in the morning about Jose Fernandez... pretty somber opening. 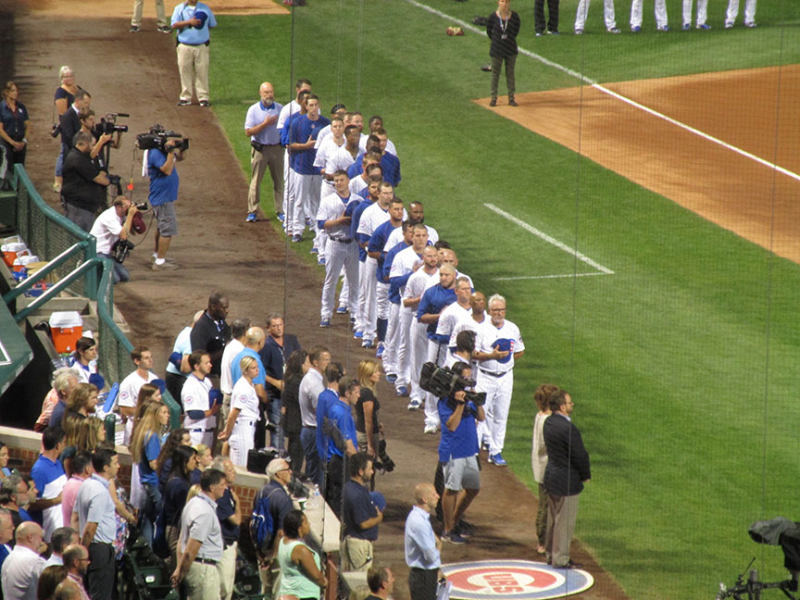 Then baseball started.
Fowler was loosening up. 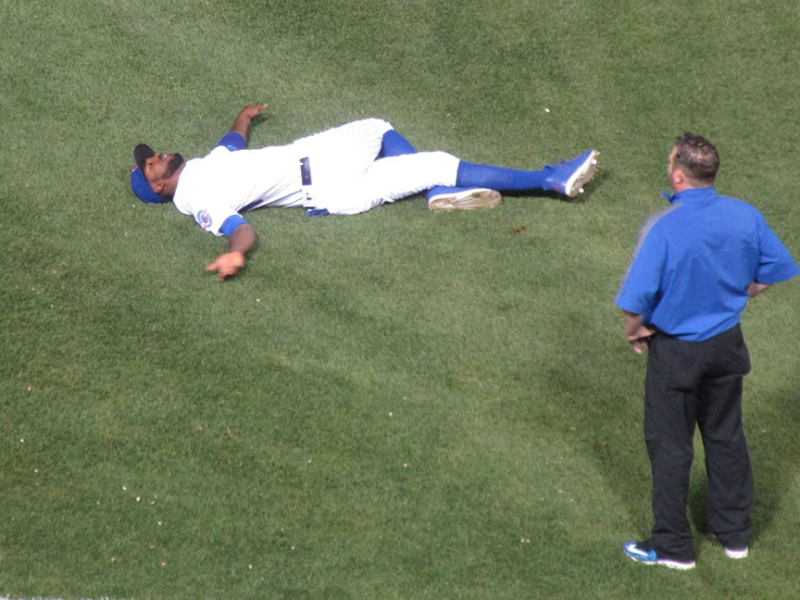 It was oddly quiet early in the game.
Lester seemed to take a long time in the top of the first, and there was a sort of lack of electricity, you know?
But eventually, we'd see David Ross hit his monster homer WAAAY BACK into the bleachers.
THE CROWD WENT TO ELEVEN.
So awesome, standing ovation, super loud, and a curtain call.
Amazing. 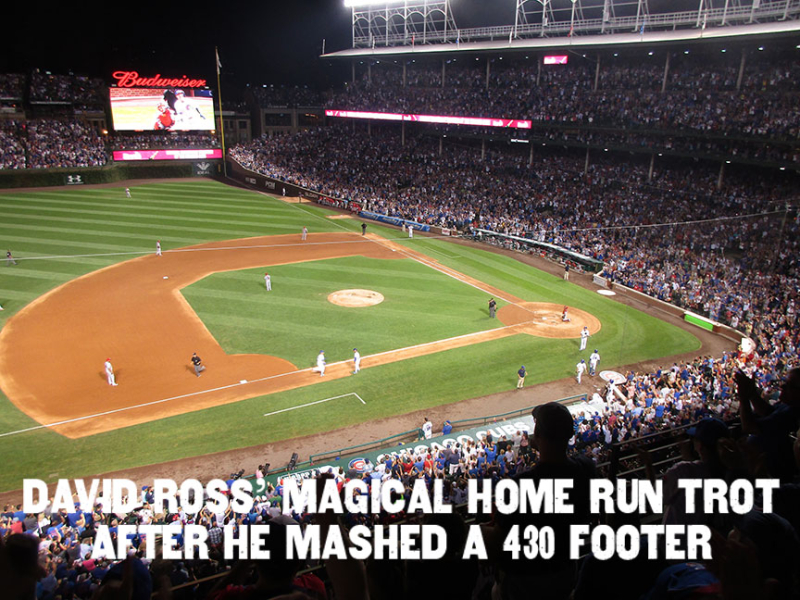 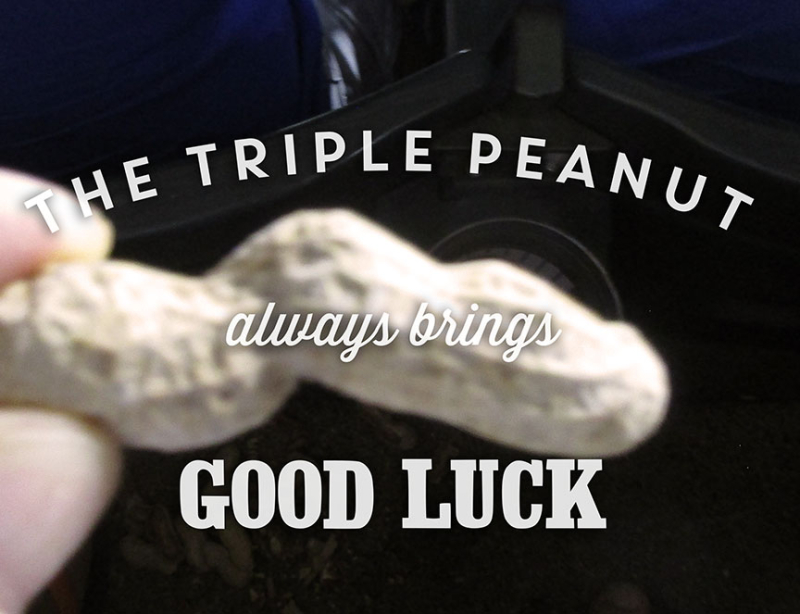 Later, with Ben Zobrist on 2nd, Addison Russell hit a liner down the left field line.
Zobrist rounds 3rd and... the ump calls it foul.
Here's what it looked like on the big screen replay: 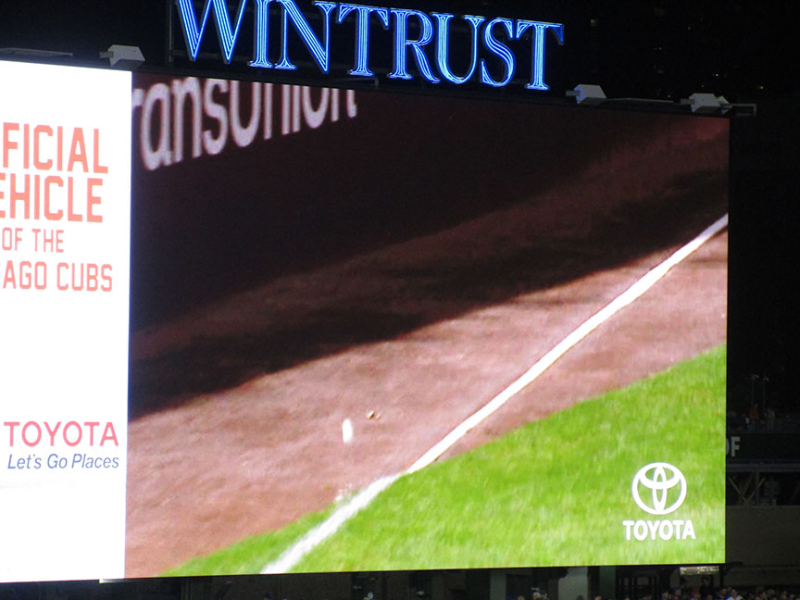 What is it with umps not being able to see the freaking chalk blow up in the air like that?
Remember 2003?
September 2nd, to be exact, when the Cubs played the Cardinals in a super-important double header.
They had already won the first game, and then this happened: Obviously, no instant replay back then, and I'm still furious about that call, Justin Klemm.

So the cameras overturn the call, Zobrist is allowed to score and now it's 2-0 Cubs. 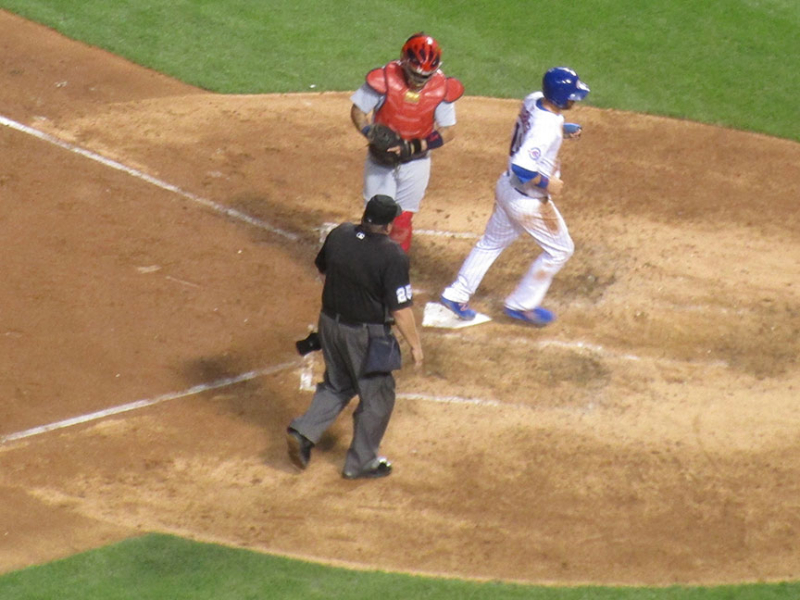 Lester, he really hit his stride and was mowing them down so we were all saying hey man what the hell? when Joe Maddon walked out to the mound to take him out in the 7th.
They're millin' around on the mound and...
Ahhh, joke's on us because Maddon took out Ross so we could all clap again.

Goose-bumpy, and that's when I also got the shot at the top of the page.
Just awesome. 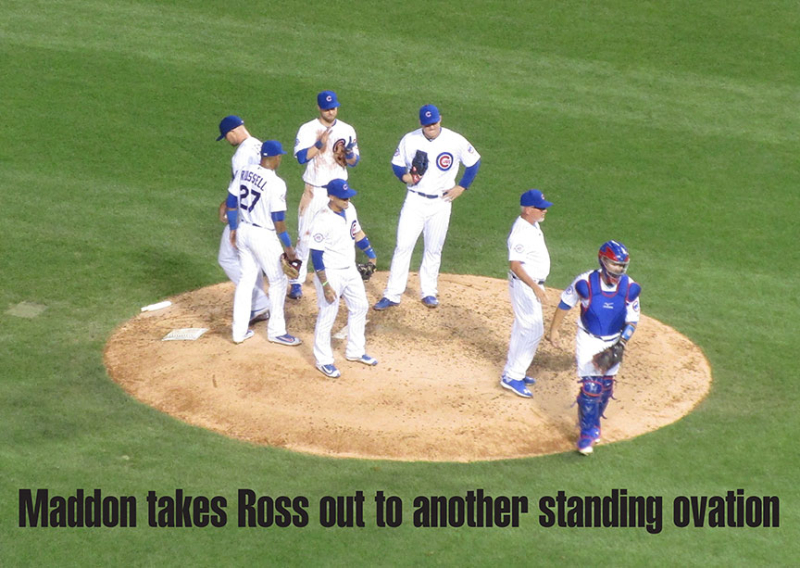 The Cards eventually scored and one single, miserable, all alone Cardinal fan a couple rows in front of me stood up and said: "yeaaaah".

Otherwise, nobody believed the Cards were gonna do anything on this night.

Then, the Cubs would load the bases and, with Willson Contreras up, score once again when he hit a ball to right that looked like it was gonna get by Piscotty. But he got it on a nutty bounce and threw to first where Contreras had run past. Zobrist had already scored but... someone was gonna get thrown out because they were all off the bag and it turned out to be Addison Russell at the plate.

Oh well, it was 3-1 when the last strike of the regular season at Wrigley was called. 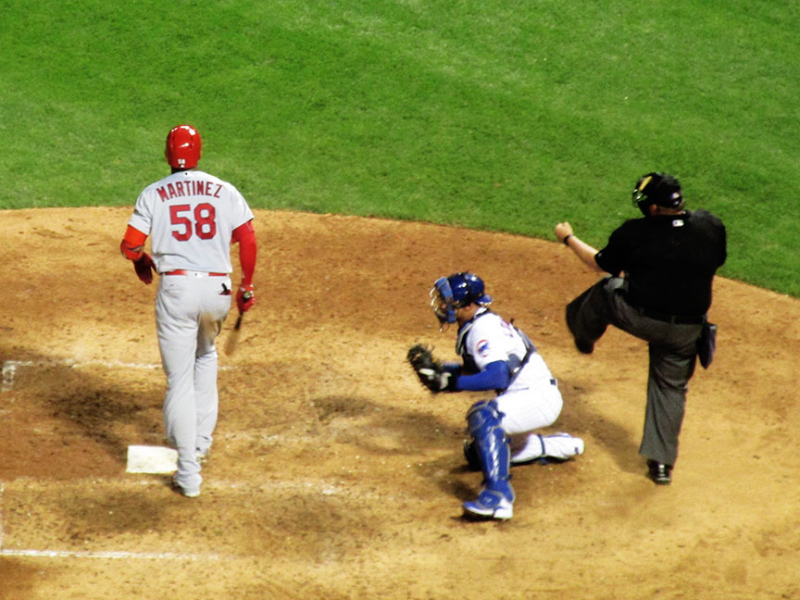 Couldn't believe it.
I started coming down with something about 9:30 yesterday.
"Man, I feel terrible."
I said that loud enough for people to hear down the hall.
"I might have to leave."
"About noon or so."
Ahhh, I can't fool anybody any more.
Everybody knows about me, and they probably know about you, too.

Got into Wrigley a tad late.
Met up with a couple Daves and one Mark just in time to see... 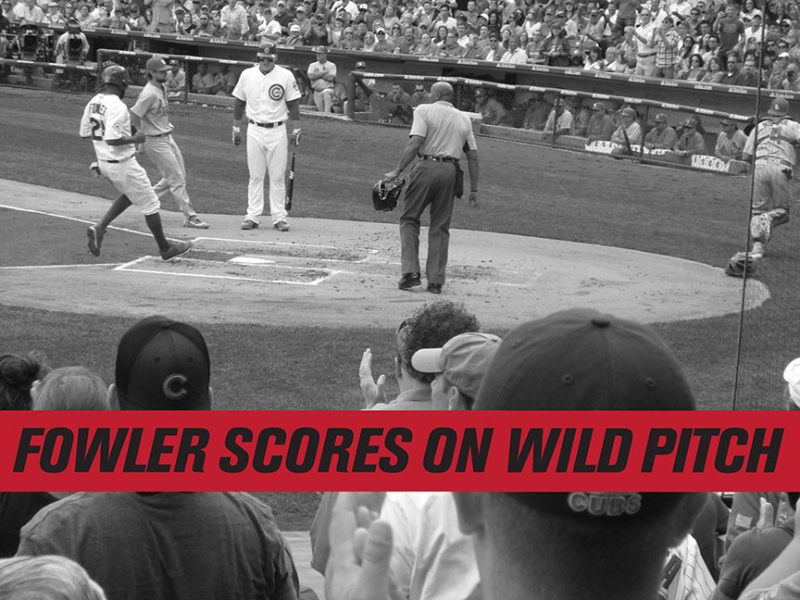 Oh you cannot believe how wonderful this first inning was.
Because then I got to see... 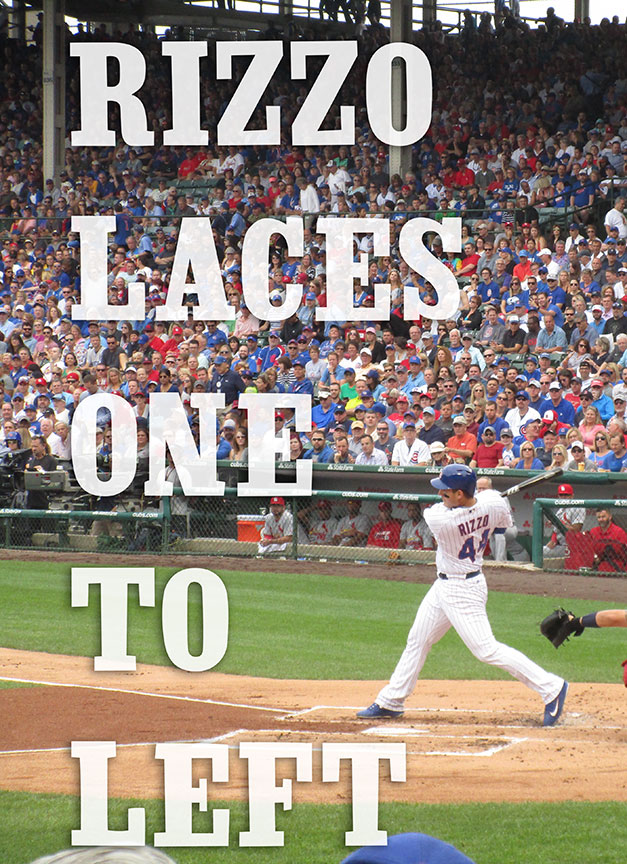 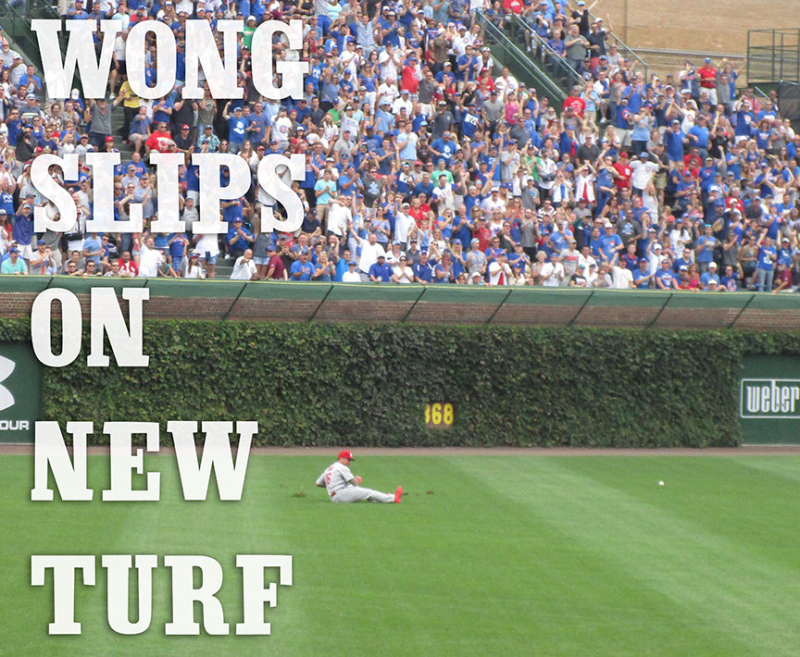 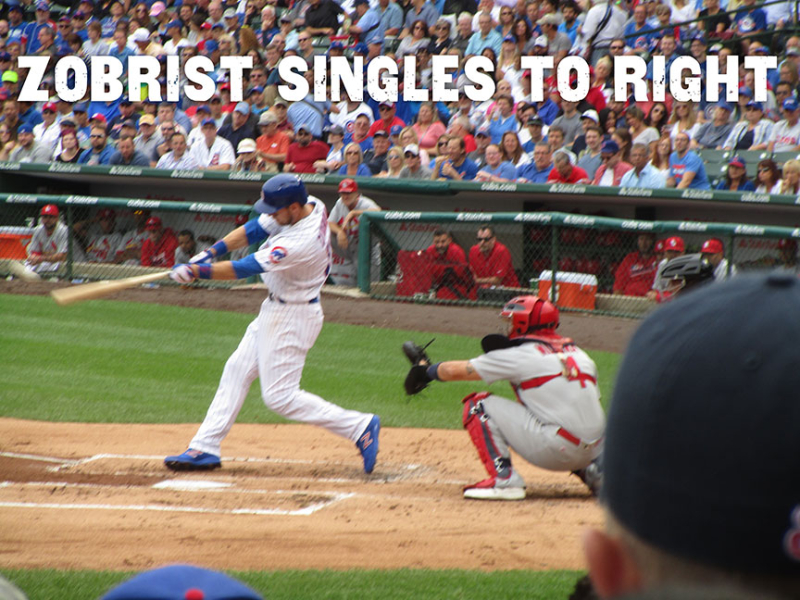 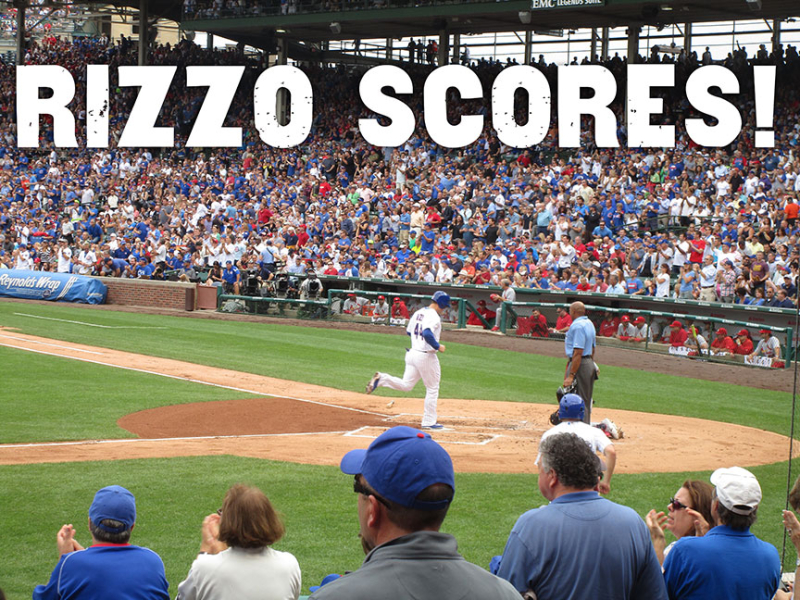 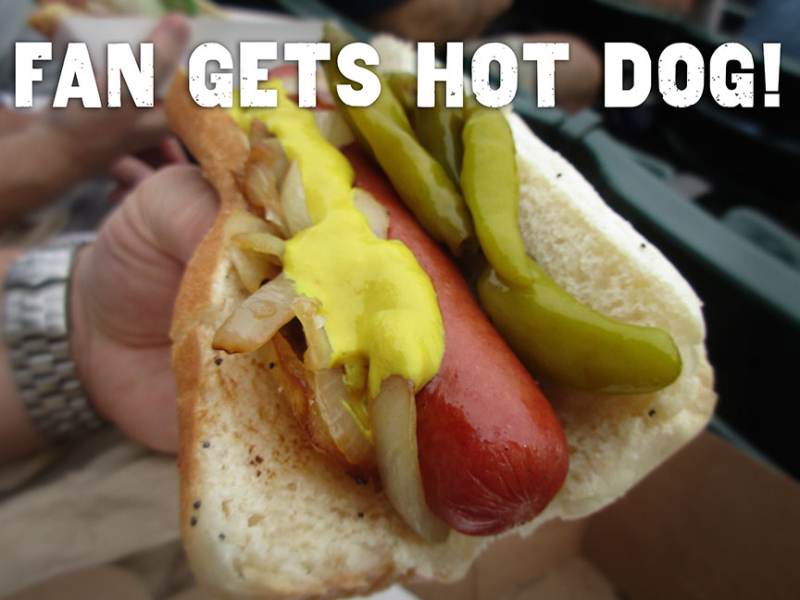 Before we knew it, it was 4 nothin'.
One inning.
Here's what it looked like down the row. 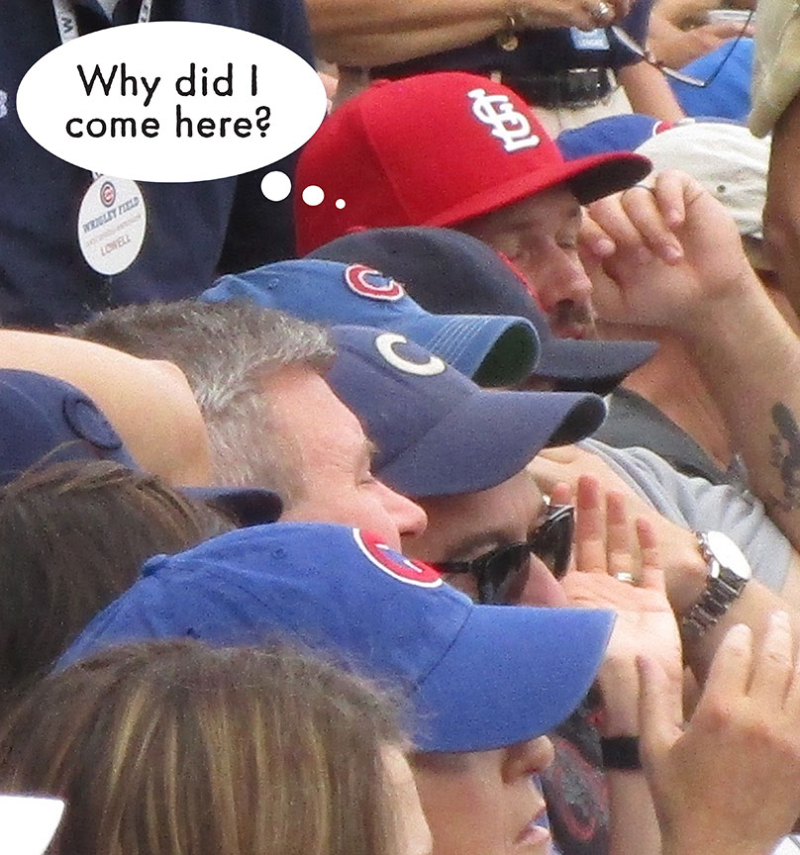 MWA HA HAAAAAA!
Seriously, what an awesome game.
Jake Arrieta appears to be in just the kind of form you'd expect him to be in, which is nasty and dominant.
How does he look like this... 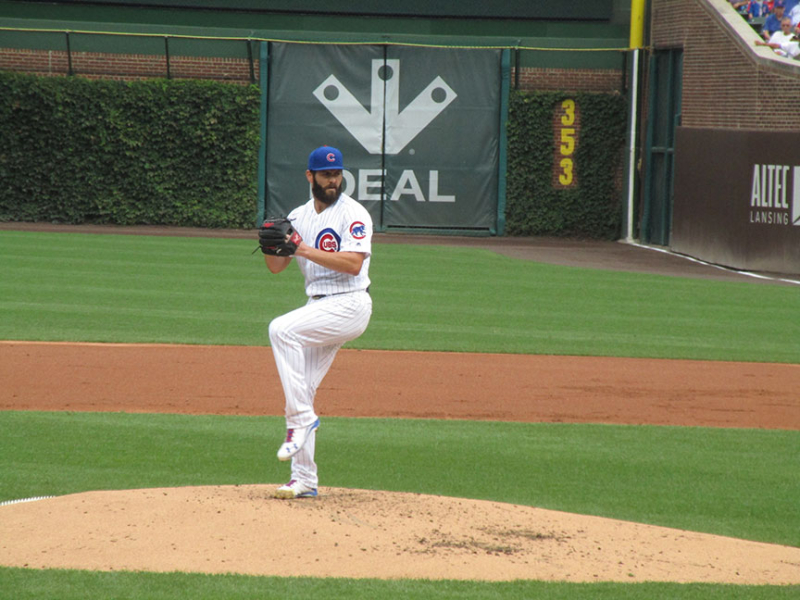 And then unleash something wicked this way comes?

There was a GREAT double play that happened right in front of us when Mike Leake bunted, but Rizzo was standing so freaking close that he took a couple steps, fielded the ball in front of Jake, threw to Bryant at third for out #1, then KB makes an incredible throw all the way across the diamond and poof, Leake was out, too.
It was one of those plays where you were dumbfounded by impossible excellence, then screamed your head off.

Here's a couple other shots... 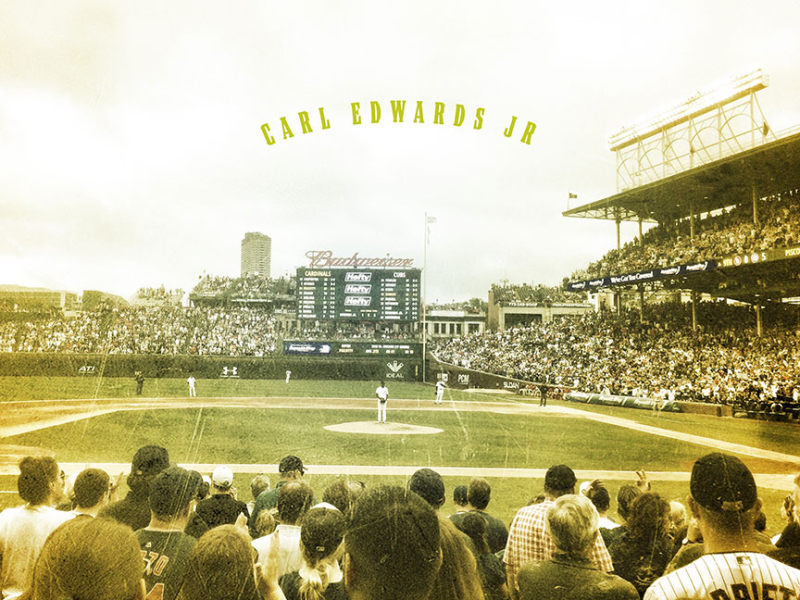 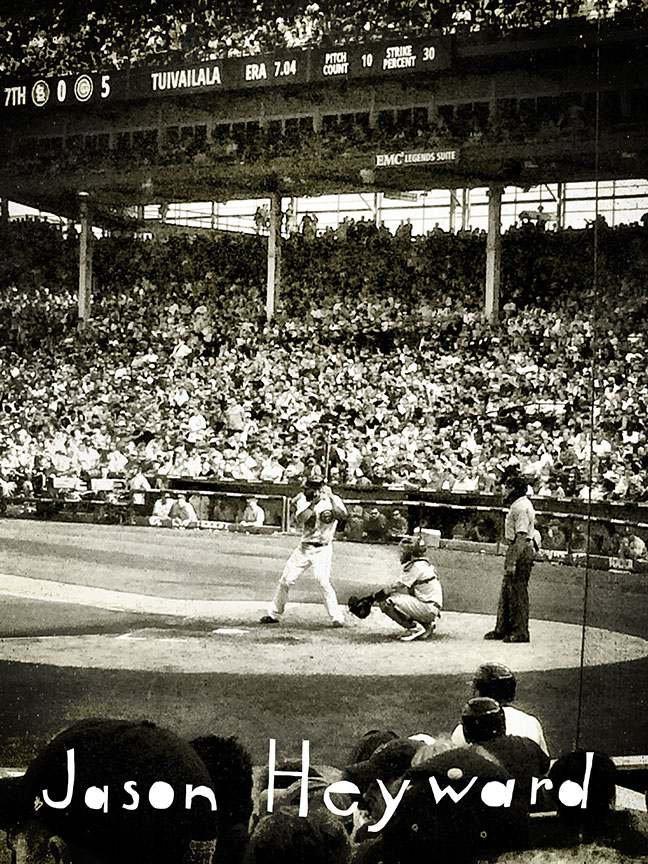 Gorgeous day, gorgeous game.
Went to the GMan after.
Remember they used to have 3 pool tables in back?
Gone.
There's another bar back there, and they don't ignore you if you have a Cubs hat on like they used to.
Maybe that changed years ago, don't really know. 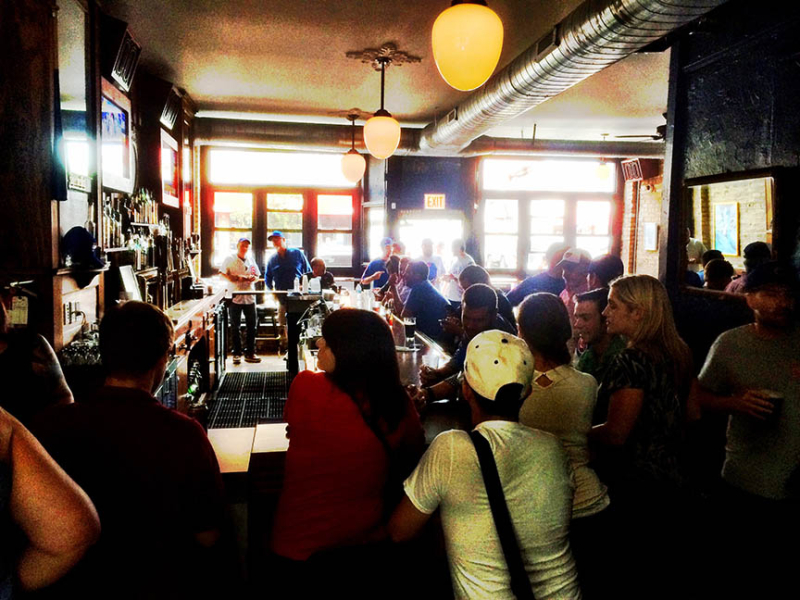 Anywhoo, Jason Hammel's gonna try to put up another positive performance, trying to make the playoff roster.
It's the Cubs vs Cardinals starring in the Greatest Summer Ever.
Go Cubs.

Cubs vs Cardinals. Maddon says he'll play them "straight up". 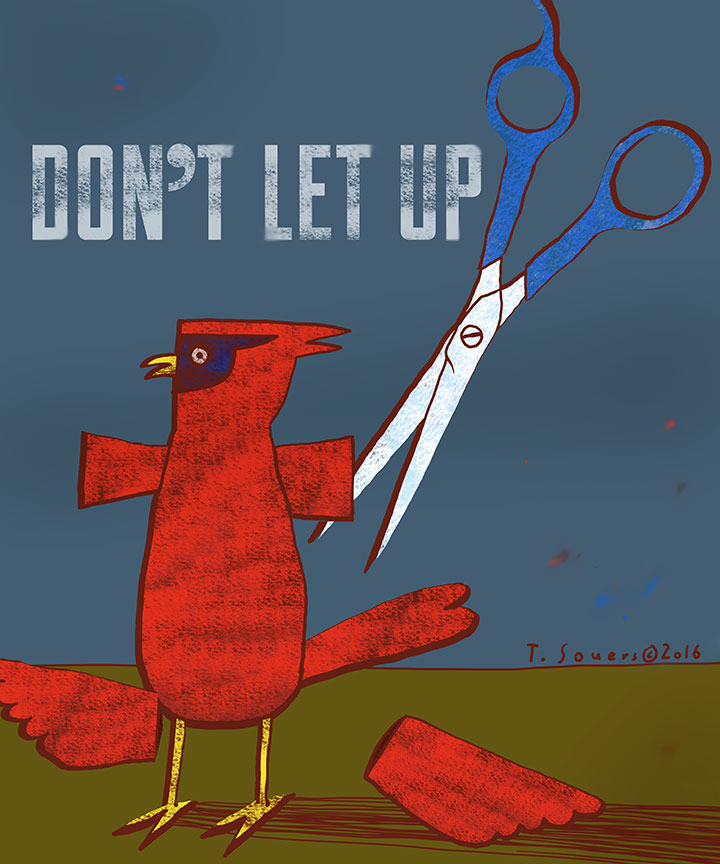 How much do you love Joe Maddon?
The Cubs could coast into the playoffs, but he's taking the games with wildcard implications seriously.
And while I would love another Cubs/Cardinals playoff series, I don't really care when the Cubs help end the Card's season.
Just do it, man.
Jake Arrieta.
Mike Leake.
Don't let up.

World Series. Allow your brain to go there, Cub Fans. 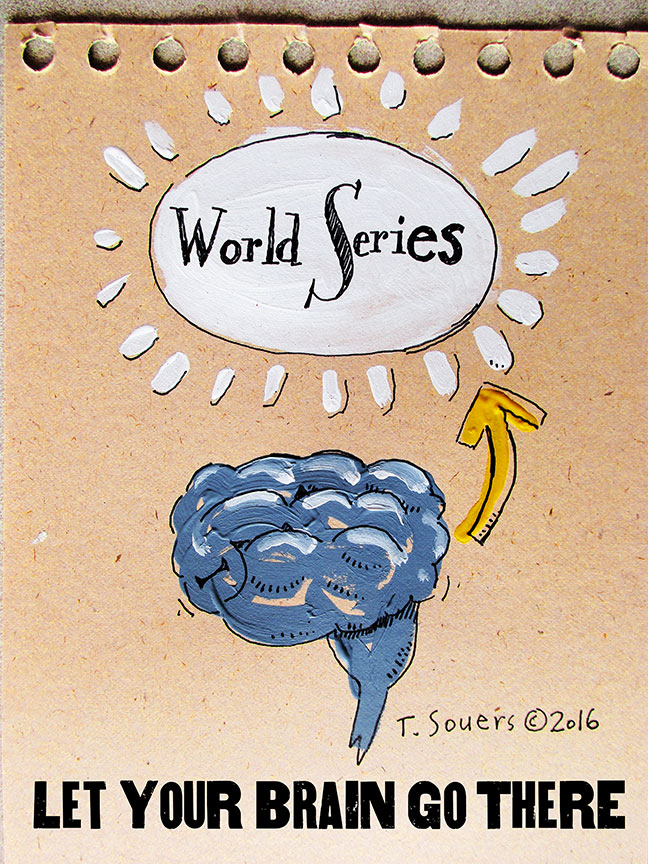 I was listening to the Baseball Prospectus podcast "BP Wrigleycast".
You should listen to it, too because those guys are nerdy Cub Fans just like you, only they're BP guys.
And The Score's Mark Grote was on as a guest.
He said he thought the Cubs were going to the World Series.
It was the first time he said it, at least publicly I guess, and also that he wasn't paid by the Cubs, but rather by a radio station that encourages all kinds of talk about Chicago teams and not necessarily in a nice way.

I've said it here before.
Allowed my brain to wander over to that territory.
It's freaky, isn't it?
The only reason I can do that is basically... Theo Epstien and his band of analytically-yet-also-traditionally-thinking management/scouting/ownership team.
Sure, if I actually got to go to one of the playoff games and ran into The Man With The Owl Eyes, I'd jump off a bridge.
But otherwise, I'm kind of over the goats and black cats.
So talking about our favorite team going to the World Series is kind of a factual conversation piece rather than a jinx.
IT TOOK SO MUCH TO JUST CASUALLY WRITE THAT LIKE I WAS ORDERING A SANDWICH OR SOMETHING.

It's the last off day for the Cubs until the playoffs, so that's what I'm doing today... just let the brain go there.
The Cubs have a magic number of (I think) 2 now for playoff home field advantage.
Their run differential is +239, their defense is perhaps the best we've ever seen in Chicago, the pitching staff is so good that the bullpen can't get any work and the starters could literally be picked out of a hat for what order they go in the playoffs.
There are two legit MVP candidates, two Cy Young candidates, a potential Home Run champ, ERA champ, WAR champ, and Wins champ and a for sure Tag champ.
It's a stretch yet possible that the Cubs will have 3 guys hit 100 RBIs.
To close all that, they have a guy who throws 104.
If you've been a Cub Fan for as long as I have, there has never ever been anything like this team.
Ever.
And Kyle Schwarber didn't even play.

So yeah, that's my brain wandering around in the town of World Series.
And there are goosebumps all over my arms as I type.


They just swept the Reds, the Cards got creamed 11 - 1 by the Rockies.

Big scare when Cubs Jon Lester got hit in the wrist.

I have to be honest.
I was working late and didn't see the play.
But real late last night I read the recap and this same thing played out in my head.
Jon Lester gets hit in the wrist by a Joey Votto comebacker?
Dodged a bullet there, man.
Did you see Johnny Cueto pulled a groin last night?

Cardinals, Giants, Mets, Dodgers... not afraid of any of that.
But injury scares the hell out of me.