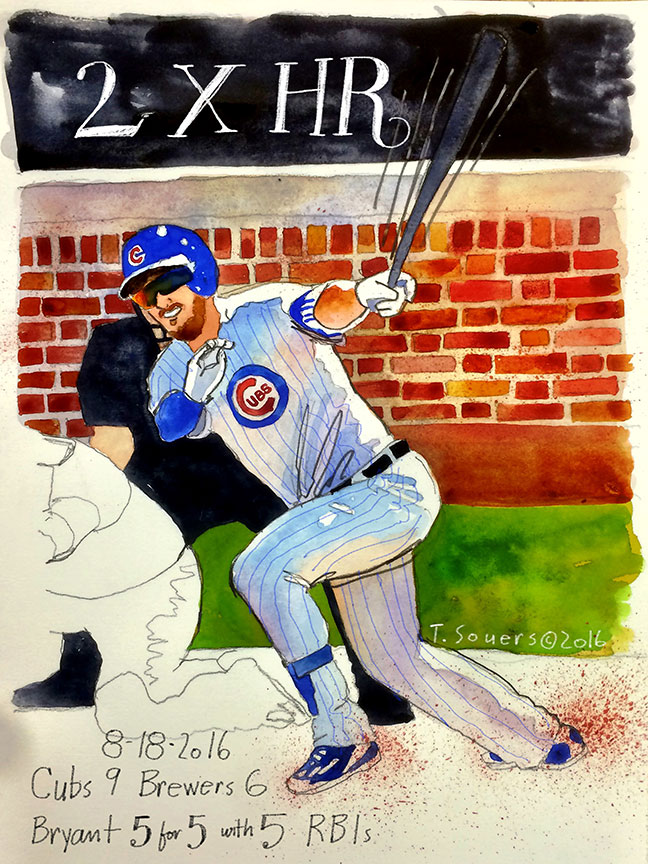 Freaking day game.
I don't know anybody that saw Kris Bryant hit two dingers and go 5 for 5 and score 4 times and get 5 RBIs in the same game.
But still, HOW AWESOME IS THAT?
The Cubs beat the Brewers 9-6 to take a 4-game sweep and keep the Cardinals and Pirates, who each had the day off, 13 and 14 games back.
Greatest Summer Ever.
Friday our favorite team goes to Denver and Kyle Hendricks will attempt to continue his amazing season in an amazing way.
7:40 PM.
And St. Louis plays the Phils.
If Adam Wainwright lays another turd, there's gonna be real concern down there.

Last thing.
I was working with an editor who's buddy had an "altercation" with some Packer fans.
He's an artist himself, so he made a poster of Walter Payton stiff-arming Packer fans who are trying to get into heaven. 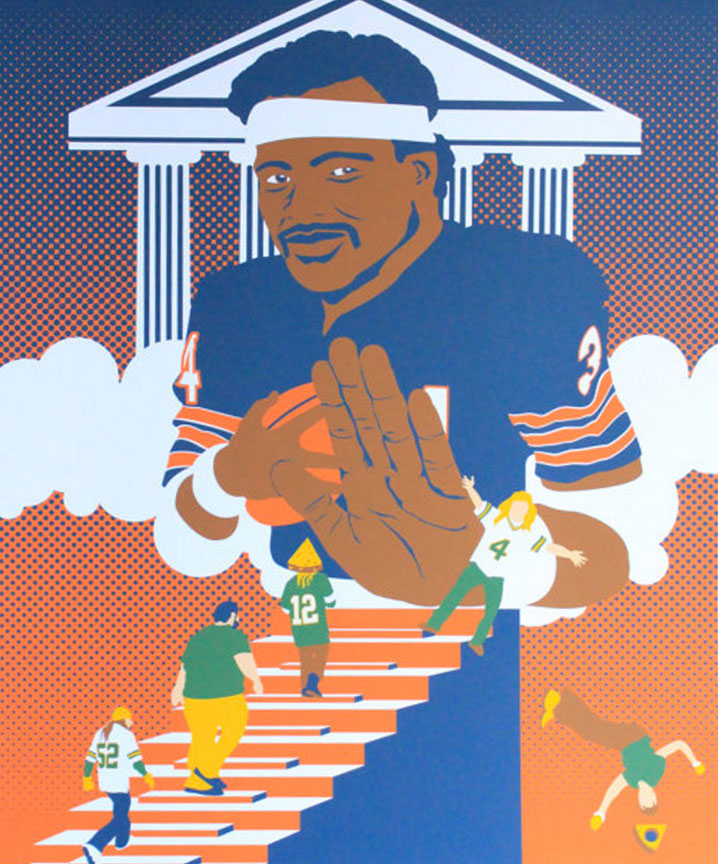 Sorry.
That's just... plain funny.
You can get it here. 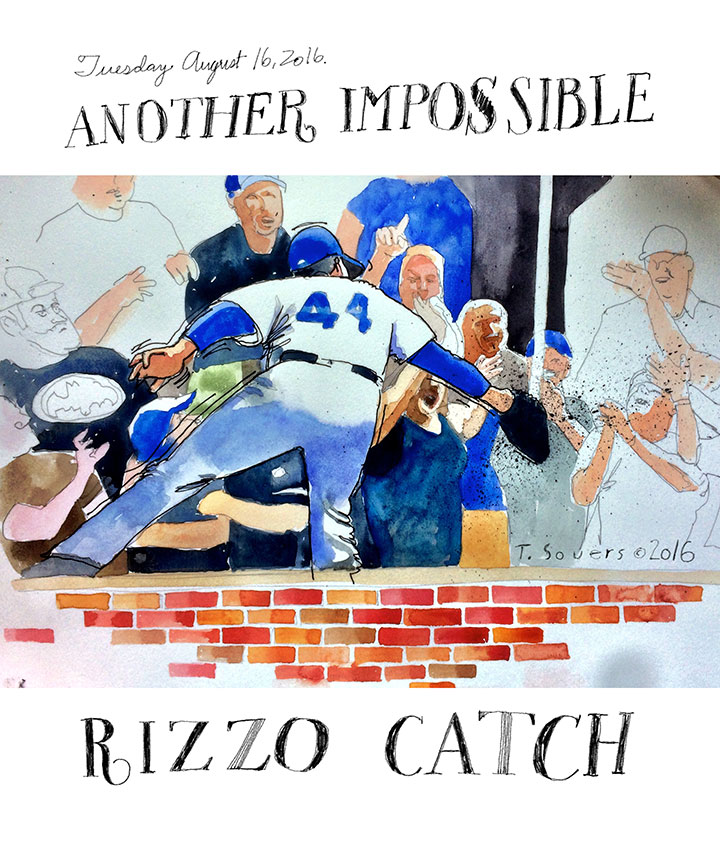 If you haven't seen it by now, go here.

Anthony Rizzo went up on a wall to catch a foul ball, only this time he didn't have to fall into the stands.
Instead, his expression let us know he couldn't believe it either, and also that um... this is a fun game to play.
There was lots of other exciting stuff that happened.
First, it was a double header sweep for the Cubs.
Game one started by Trevor Cahill who was excellent, gave up nothin', and now hopefully the Cubs give John Lackey some serious rest and get the shoulder straightened out and go ahead and give Cahill another start.
Rondon came in for an inning and... ta daaaa: wasn't so rusty.
Walked a guy but got his 3 outs.

Game two started by Jason Hammel, and he too gave up nothin'.
7 innings.
The crazy Rizzo play.
But this one was really Javy Baez.
Did you see the diving tag?
The monster homer?
Google around and you will.
That guy is honestly not from... here.

Anyway, no real time to write.
The painting isn't accurate - Rizzo really jumped up, caught it, pivoted and jumped back down.
I painted the bricks too soon.
Cubs win 2.
Cards and Pirates each win 1. 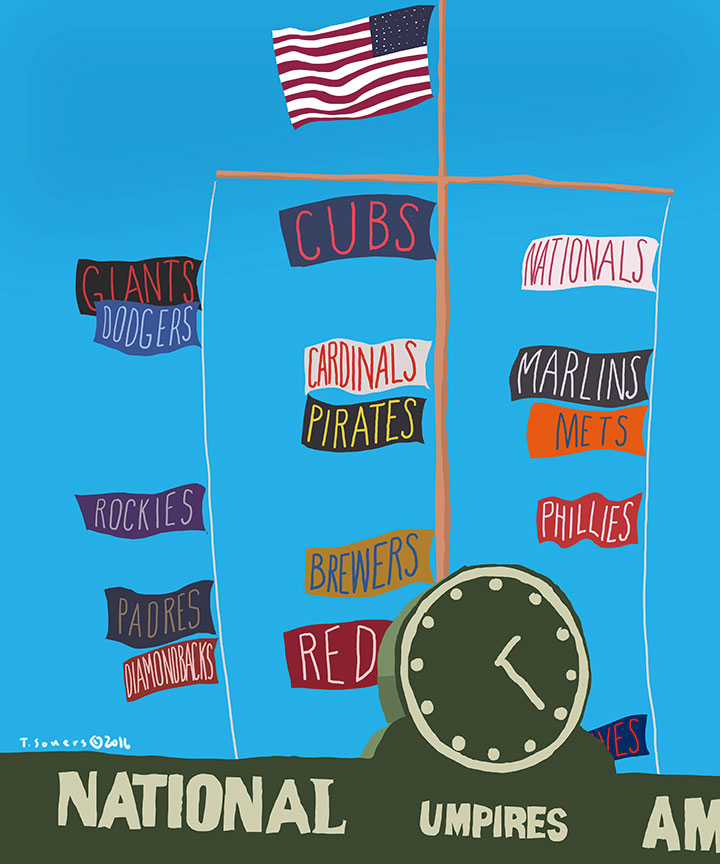 See that?
Those flags they have hanging off the scoreboard at Wrigley?
That's what it looks like.
The order, I mean.
And if you look at a calendar, it's August 16th.
DO YOU HAVE ANY IDEA HOW RARE AND WEIRD THAT IS?
That's opening a quadruple peanut in the stands and watching Marla Collins hit a grand slam off Al Hrabosky and then finding no line to the men's room.
Hey they dropped a couple to the Cardinals?
Those flags are the Big Picture.
And I made 'em kinda accurate down below where the wild card guys will be fighting it out.
The Marlins and Cards each have 62 wins, the Pirates 60, and out west the Giants have 65 and Dodgers one less.

Well... it was an awesome game for 7 innings, or at least until John Lackey left with a tweaked shoulder.
Then, a kick in the nads when Hector Rondon came in and gave up the Piscotty 3-run homer and the lead.
And because sometimes these things are just... as cruel as possible, the inning went on for about another hour and they tacked on 2 more.
But really, there haven't been too many of these types of late-game meltdowns... it just got magnified against the Red Bird Flu.
So I'm choosing to go with management's version - Rondon just needs to get rid of some rust and he'll be fine.

Today's a day off and then we can all show up again with a fresh attitude.

Lets hope Lackey is okay.
He's got that giant grimace on his face kind of all the time.
So when they showed the replay of his last pitch, it seemed like... well is that his normal face or is that his "I hurt something" face?
We'll see soon enough.

My brother came from Los Angeles to go to the game with my cousin John and his buddy Blomquist, who got us impossibly awesome seats 7 rows away from Anthony Rizzo.
Look at how close we were! 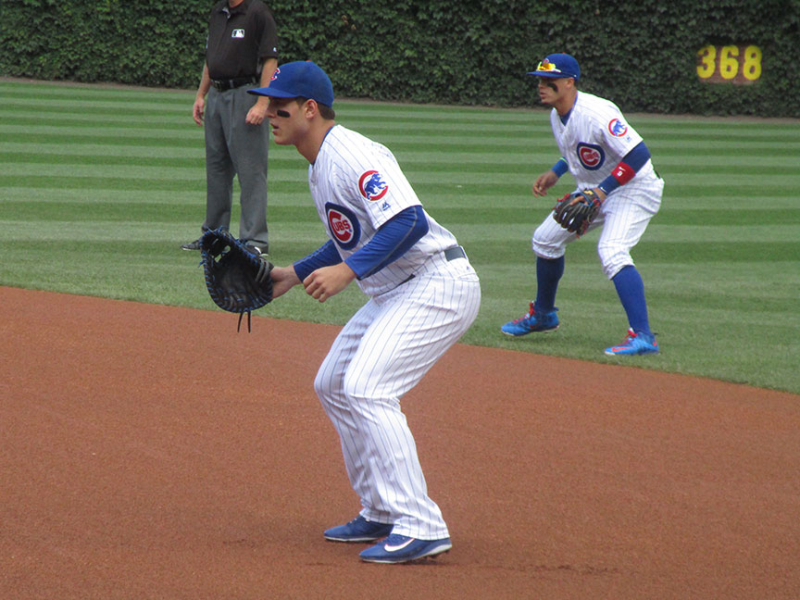 Despite the loss, I'm telling you it's just not possible to have more fun on an August afternoon than spend it at Wrigley Field.
Here are some pics: 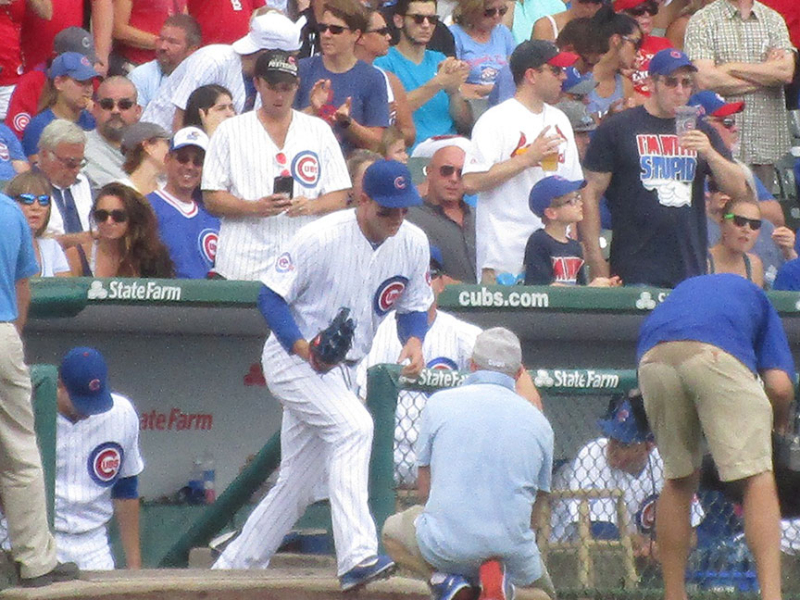 Rizzo is the first to run onto the field.
(Note the "I'm with stupid" shirt in the crowd and who it's pointing to.) 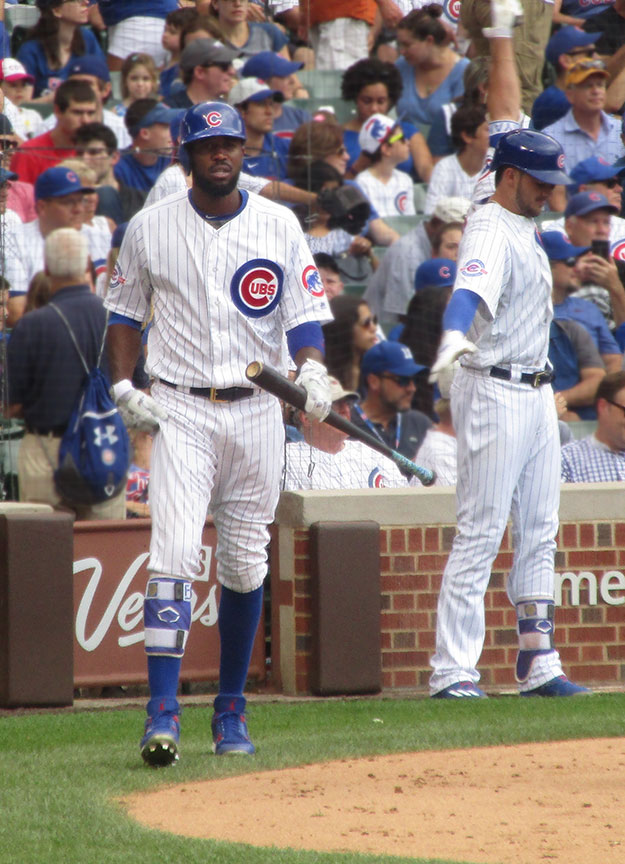 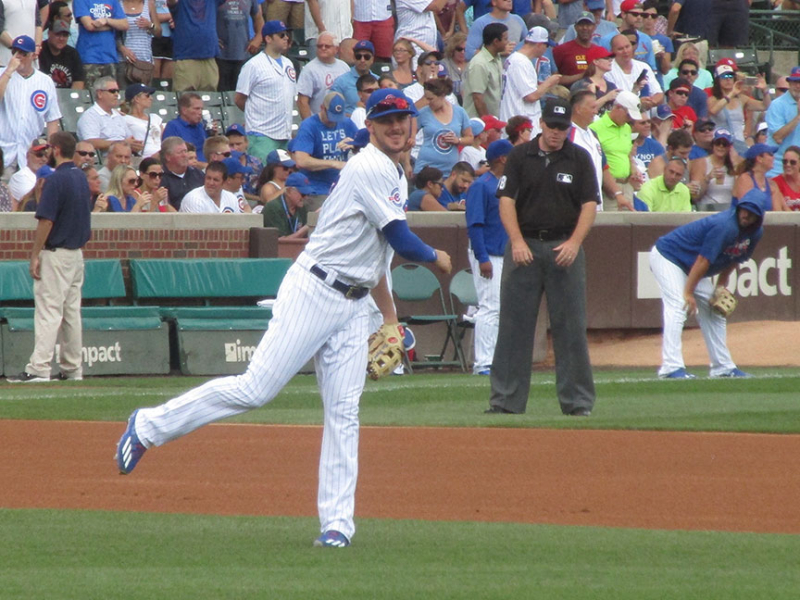 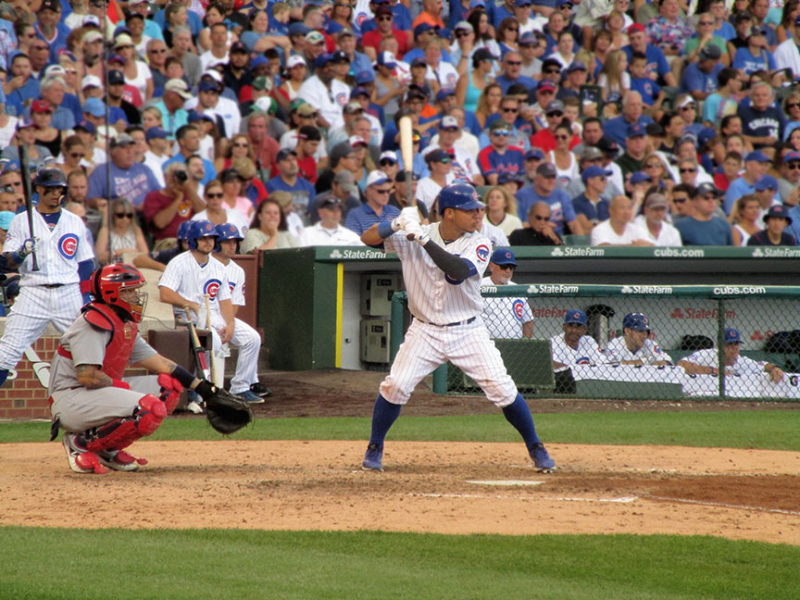 Contreras up to bat. 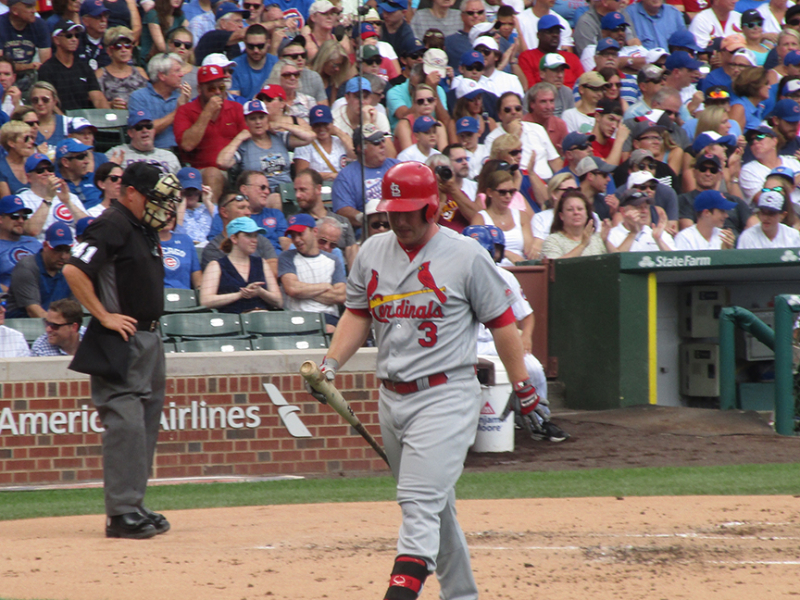 Jed Gyorko strikes out - one of Kyle Hendricks' 12 Ks.
Usually when I go to Wrigley, I take 20 shots of the pitcher. I can't believe I didn't take one of Hendricks. 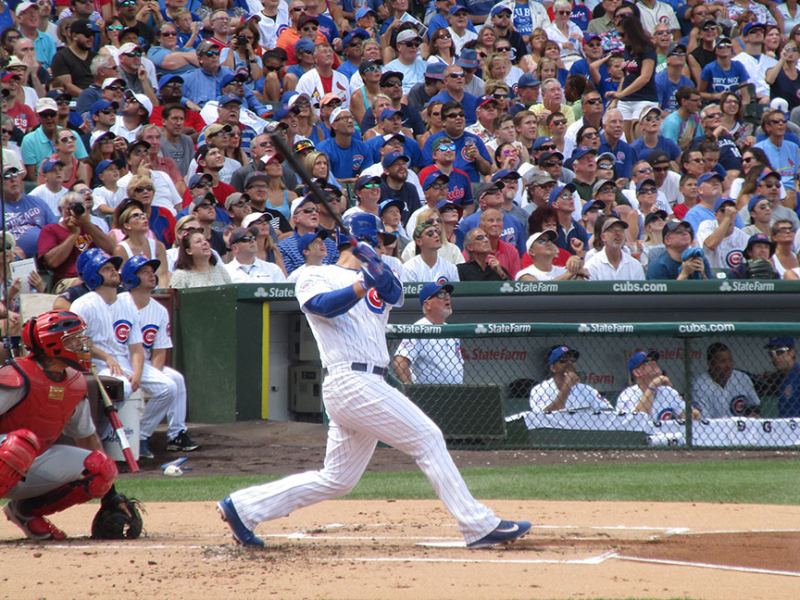 Rizzo's swing. Look at all the heads following the ball. It was a pop up. (The guy in the stands over Rizzo's shoulder - I thought Anthony had a real tiny head for a minute). 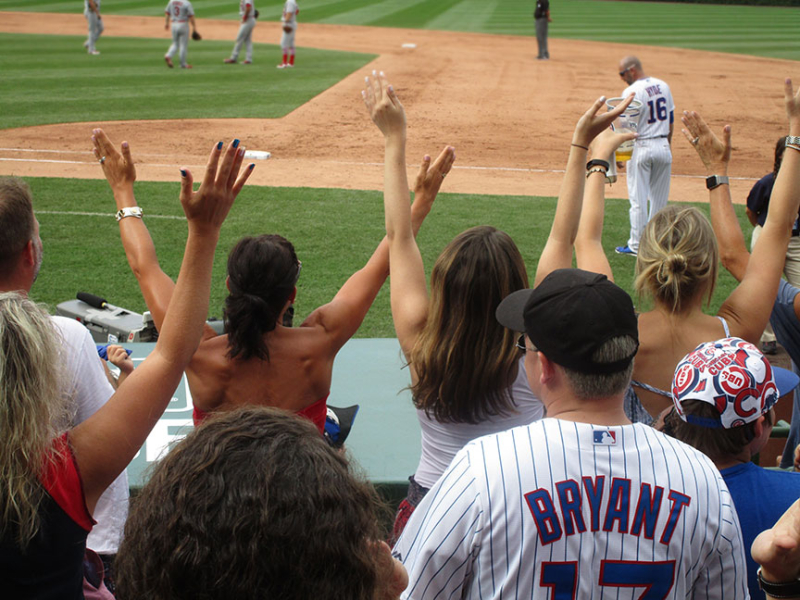 People dancing to that song about the Young Men's Christian Association. 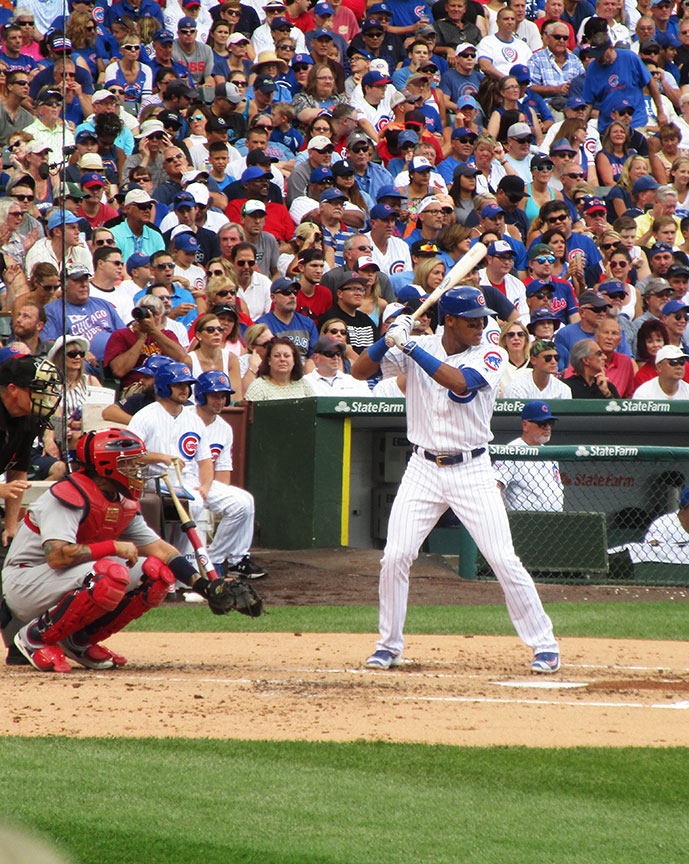 Addison Russell comes up to bat and... 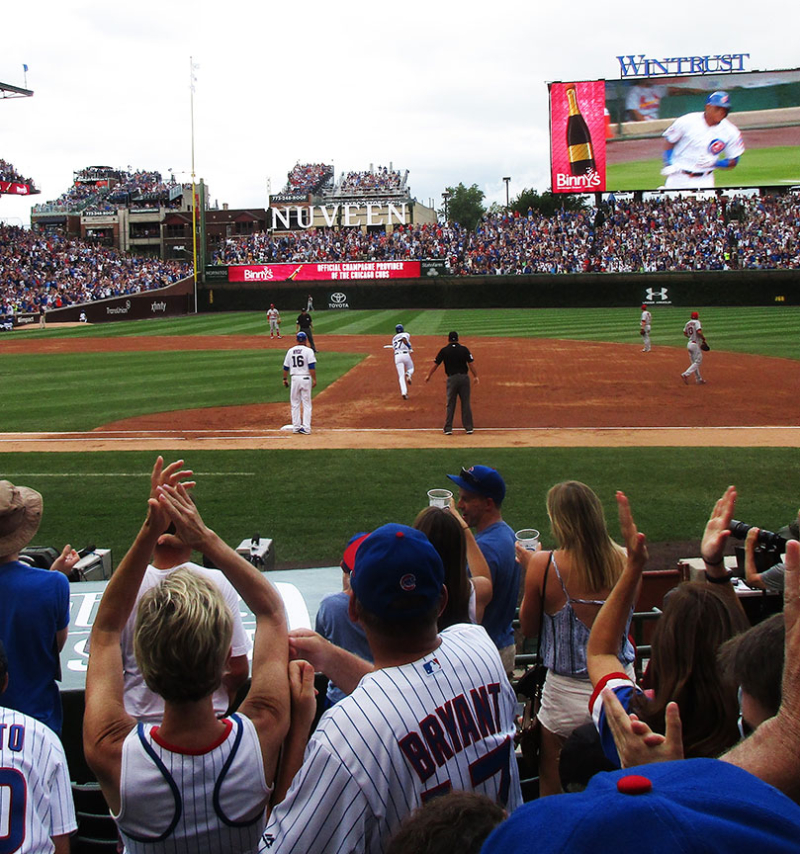 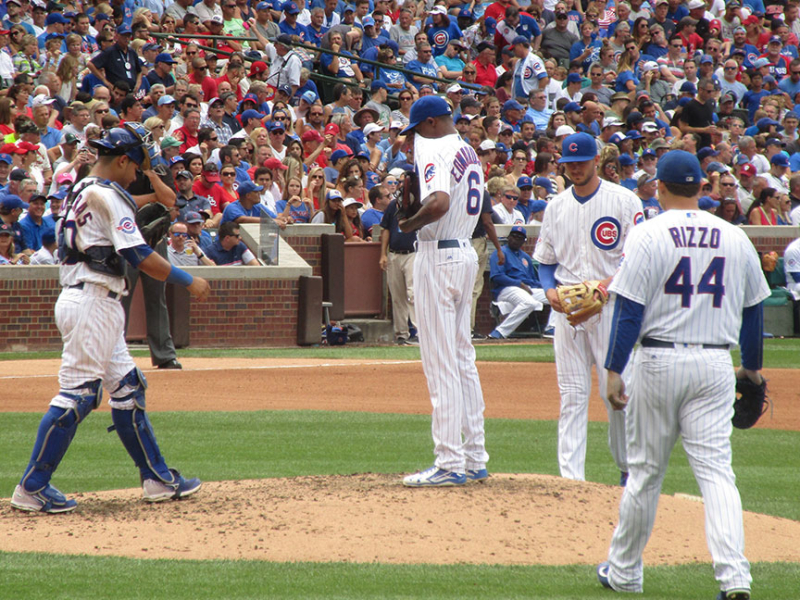 So... Carl Edwards Jr.
Lotta people think Joe Maddon left him in too long.
Here's his quote from Cubs.com: "Part of leaving [Edwards] out there, too, is to learn how to get out of that moment," Maddon said. "If he does, and he walks off, he's learned another lesson. It didn't play out that way."
Strop and Rondon were not available.
I think Strop's meniscus surgery - you don't know how he'll do coming back from that in 4-6 weeks, right?
Young Carl Edwards might have to assume the Strop role.
Either way, when you're off your game, it's the Cardinals, and 41,000 people are all screaming their lungs out... welcome to the Bigs, kid.
I'm glad Maddon didn't give him a quicker hook.

But the grand salami... not real fun. 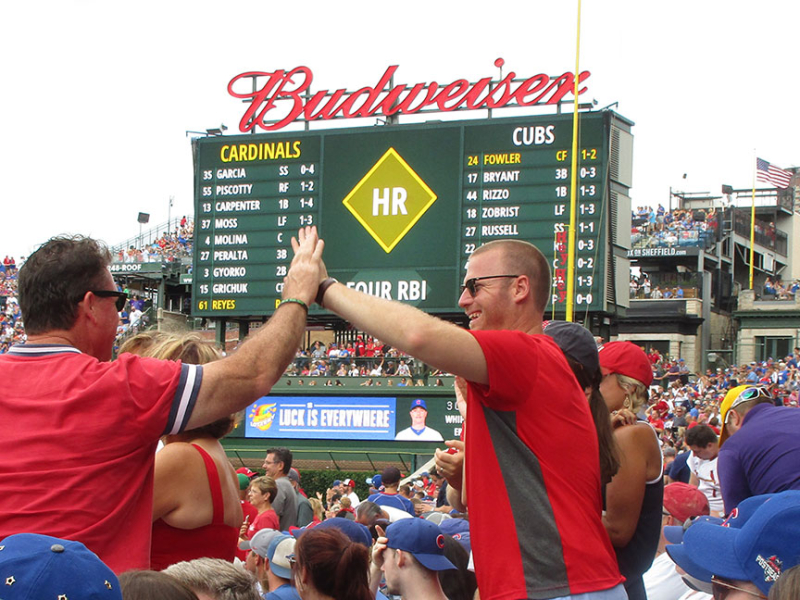 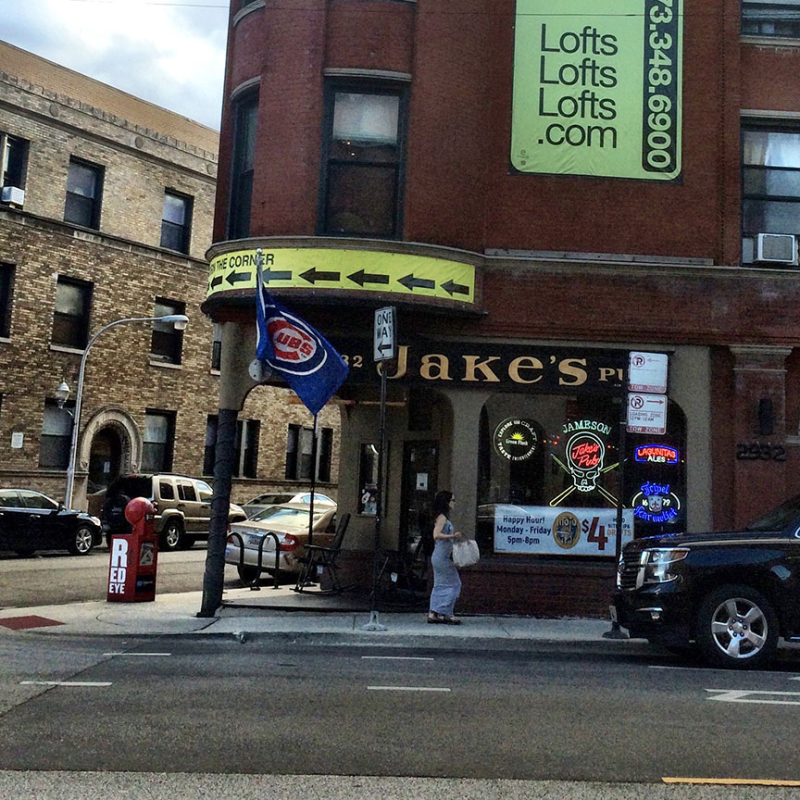 Tonight at 7, John Lackey continues his Cub Quest for jewelry as he takes the mound against Mike Leake on ESPN.

Pretty sure I've never seen anything like that.
A no-look, 2-out, 2-run single?
Come on, dude - THAT'S IMPOSSIBLE!

Chris Coghlan was trying to call a time out, looked back at the ump, didn't get one, whipped his head back and swung into a pitch, driving the ball into the outfield and scoring Kris Byrant and Anthony Rizzo.
Lucky.
A "look what I found" play, only batting.

Then Joe Maddon, God bless him, once again pounces when the opposing team's head is spinning.
Because I promise you Cardinal pitcher Carlos Martinez was thinking "A no-look, 2-out, 2-run single? Come on, dude - THAT'S IMPOSSIBLE!" too.
Maddon immediately had Dave Ross, the oldest and slowest guy on the team, sacrifice bunt with Jason Heyward on 3rd.
Until he was crossing the plate.
And Ross was safe at first.
Quick cut to the Cardinal dugout and you could read Mike Metheny's lips saying, "I'm Batman! Where's my latte?"
Just kidding.
But not really.

So anyway, I swear when those kinds of plays happen there ain't no way the Cubs lose.
Even if Randall Freaking Grichuk can travel from triple A and hit a homer off Travis Wood to tie it up.
Because then... a 3 pitch 3 out inning for a laughing Aroldis Chapman.
Including crazy-reflex Javy Baez at 3rd making back to back plays which would have sent mere mortals to the hospital.

The game went 11 innings and eventually the Cubs loaded the bases and Zach Duke walked Anthony Rizzo to end the game.
Cubs 4 Cards 3.

(I'm also actually bummed about Matt Holliday's thumb. As always, you never want to see a guy get hurt, and you want to beat their best. He's a guy I love to hate. I'm sure you do, too.)

Supposed to storm this afternoon, but I believe they'll play anyway.
Because it's the Greatest Summer Ever.

(And Bob, if you're reading this, the Bernbach thing was fantastic! And great seeing you, too.)

Lastly - Willson Contreras put my painting on his Instagram!
COOL! 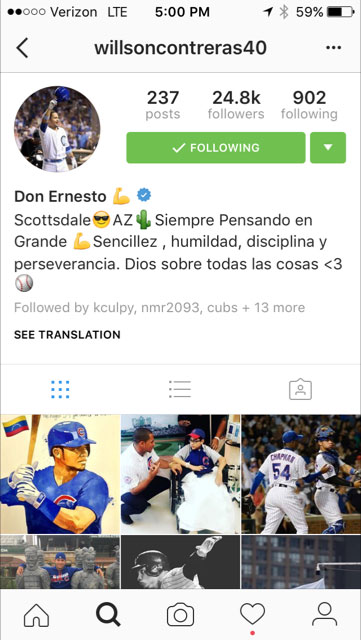