You know I love doing this idea.
So you're Josh Harrison and it's the top of the 4th and you've just gotten the first hit for the Pirates off of Kyle Hendricks.
You're sooo happy.
You're the man.
You're the guy who finally broke through, because Hendricks is dealing.
And you get a little greedy.
You think hey, why not just take second base?
So you take your lead.
You're watching Hendricks.
He winds up.
You BREAK but OH NO! NOT... HENDRICKS ISN'T THROWING HOME YOU GOTTA SCAMPER BACK TO...
aaaaaand you're out.
Right there on live tv, Kyle Hendricks just gave you a wedgie.

The Cubs, behind Hendricks' masterful painting of the corners, never gave the Pirates a chance.
Well, a little hiccup with Carl Edwards, but otherwise Anthony Rizzo's 26th homer was all the Cubs needed.
That Javier Baez was standing on first when it happened made it 2 nothin'.
And it ended up 3 nothin'.

That Pirate lineup isn't a cake walk.
They have some monsters over there, and Hendricks cut through 'em like buttah.

If you were watching last night, then you know what this is about.
Top of the 7th.
Freese on first, Cervelli up, 3-2 count and Jake Arrieta on the mound.
Freese breaks for 2nd, Arrieta throws the pitch, young Willson Contreras nails Freese at 2nd.
Arrieta's pitch was low and outside and over the plate - a perfect strike 3.
But the ump called it a ball.
Instead of nobody on and 2 out, it's no outs and 2 on.
Arrieta barks at the ump, Joe Maddon comes out to give the ump a piece of his mind.

Yeah, I know: anything can happen in baseball.

What did happen was Travis Wood came in and struck out Matt Joyce.
Maybe that could have been out #3.
But instead there's still 2 outs and Josh Harrison hits a 2-run double and the Pirates lead 6-3 rather than 4-3.

It's always interesting to think about what would have happened if something else didn't.
Like in 5th grade if Tammy Forrest hadn't literally bumped into me in the hall and I was forced to talk, I would never have had the nerve to ask her to sit next to me on the field trip to Busch Gardens and woulda waited another year for my first chance at holding hands.

All I have to say about last night's Cub Victory is hey, it's awesome that they pulled it out and the Greatest Summer Ever gets another W notch.
But that one little ball call definitely had a domino effect that kept falling until Miggy Montero hit the game-winning single in the bottom of the 13th, and Joe Maddon's gotta deal with who may or may not be available in the pen tonight.

Then again... that's baseball for ya.
And I love it.

Cubs Carl Edwards Jr. will have an important role in the playoffs. 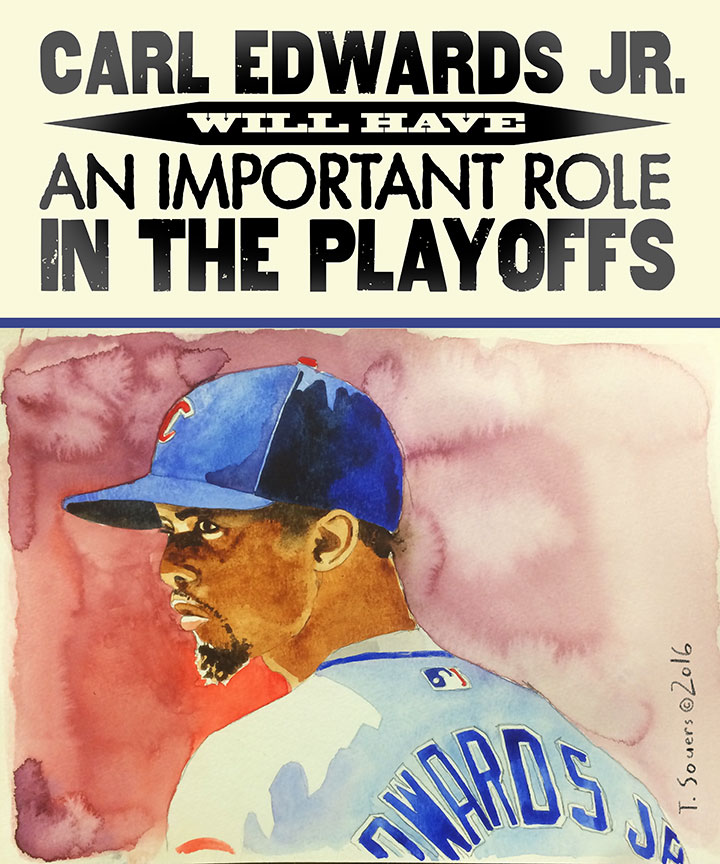 I'm sure that lots of people are going to spend their energy talking about the brain fart Javier Baez had in the 8th inning yesterday when he threw to 2nd without any apparent urgency allowing the Dodgers Andrew Toles to score what turned out to be the winning run.
But consider this - that play happened behind Carl Edwards, who had been called in to save Trevor Cahill's ass after he hit a guy and then threw wildly to first base, allowing the Dodgers to put men on 2nd and 3rd.
Cahill intentionally walks Corey Seager to load the bases and set up the double play (there was one out).
But then Joe Maddon brings in Carl Edwards Jr.
With Justin Turner and his 24 homers and .500 slugging percentage coming up to bat followed by old pro Adrian Gonzalez.
You cannot teach what Edwards learned in the next couple minutes.
Turner couldn't catch up to Edwards heat and struck out.
Now it's Adrian Gonzalez, and Edwards gets him to hit a grounder to short.
You're thinking damn, that Edwards kid has ice in his veins.
But then Baez does the mental mistake and a run scores.
Right then, if the Dodgers were managed by Joe Maddon rather than Dave Roberts, the Dodgers would have done something unexpected - a squeeze or something because the kid on the mound had to be rattled, right?
But they didn't.
And Edwards treated Joc Pederson like it was just another Sunday afternoon rather than Oh My God This Inning Could Blow UP RIGHT NOW.
Pederson struck out looking.

The lead the Cubs have is almost laughable, just from an old Cub Fan's point of view.
And really, if you look at that play as some serious schooling for both Edwards and Baez, well I have no problem with the outcome.
If I'm Maddon, I figure Edwards is someone I can turn to in a huge situation, and Javier Baez ain't gonna make that mistake again.

So, bummer with the 0-1 L, but that was a great game to watch (who knew that Brock Stewart could get 8 Ks in 5 innings?).
And Jon Lester is clearly on cruise control of excellence.

Back to Chicago last night, and tonight it's Jake Arrieta vs the Pirates and their 4 game winning streak.
I'm sure Baez thought about his play all the way back. 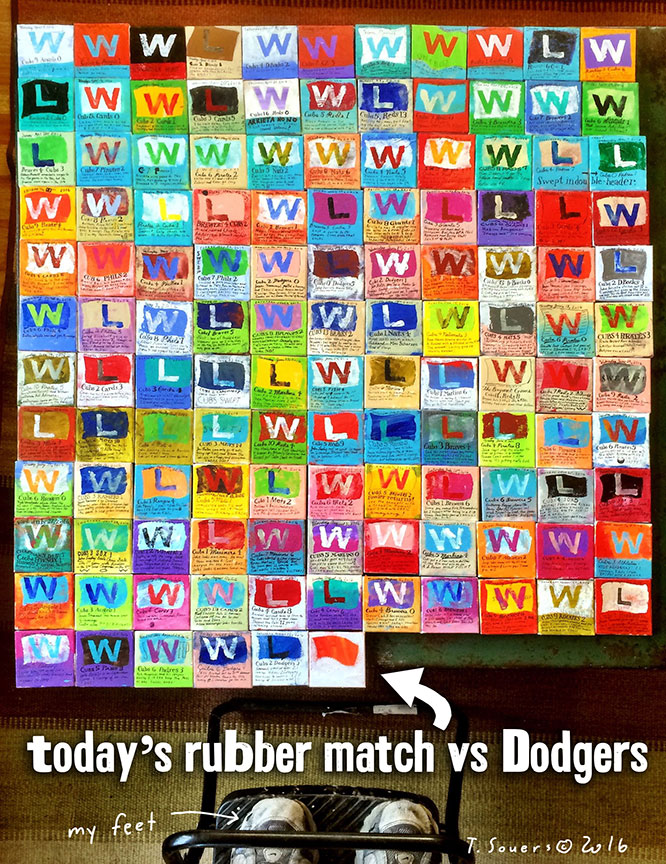 82 wins.
Eighty two wins.
18 more = 100.
Wins.
I heard on yesterday's radio broadcast that they're actually projected to win 105 games.
The Cubs.
One hundred and five games.

Here's a fun thing to try: name the starting Cub lineup from 5 years ago.
I'll give you a minute.

This is the lineup from opening day in 2011:

Yesterday we got to listen to the game in the car driving back from Minocqua.
Soon as I got home I turned it on and I swear to God that Pedro Baez bugs the living crap out of me.
I was SO pumped to see some actual Cubs action, and instead it's that guy on the mound just out to wreck my fun.
He threw 29 pitches and Len or JD said he was averaging a pitch a minute.
So like, a half hour for 2 outs.
But the Bryant at-bat was fantastic, the concentration he had to muster in a 10 minute BB was good stuff.

In the end it was Dodgers 3 Cubs 2, and you just look back at the first inning when Fowler walked, Bryant singles, Rizzo singles and Fowler scores and the kid from LA, Julio Urias, was totally on the ropes.
Zobrist sac bunts which was kinda weird.
Then Russell and Soler strike out looking.
Oww.

Oh well, rubber match in a couple hours.
Jon Lester vs a Dodger emergency starter named Brock Stewart who's given up 5 homers and 7 BBs in the 12 Big League innings of his life.
Not gonna jinx anything, but man this should be ugly for the other guys in white and blue. 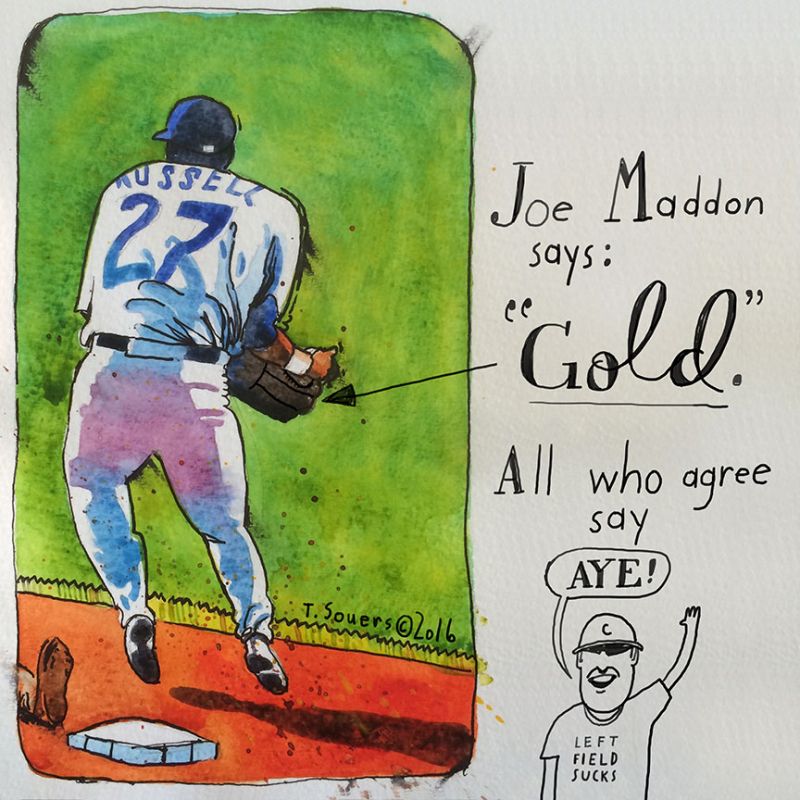 Joe Maddon says Addison Russell should get a gold glove?
Hell yes!
Of course I'm a Cub Fan, but so what?
A) I love when managers stump for their players like this and B) did you see the amazing stop of Wil Meyers' smash up the kinda middle?
That's not a fluke play for our favorite shortstop.
In the article, Maddon compares him to a young Jeter: "Very simple with the feet."
I guess the same applies to when he's not on his feet.
Plus, he's been SO HOT with the bat and it's obvious that like all good hitters he has the ability to adjust.
I almost did a thing yesterday just because I dislike Steve Garvey so much...
Did you know that in about 2-3 games Russell will have more RBIs than Garvey had in his best season as a Padre?
That would be 86 (of course he went as high as 115 with the Dodgers but whatever).
With the one he knocked in yesterday, Russell has 83 and it's still August.
Ernie had 143 in '59, when (I'm 99% sure) he was still playing short.
But other than that (and I didn't search everything), a guy named Bill Dahlen got 107 in 1894, Joe Tinker's best was 75, Don Kessinger had 53 in '69, Shawon Dunston had 75 in '95, Jose Hernandez had 43 in '99, and Starlin Castro had 78 in '12.

It's so early in his career, but I think it's safe to say that Addison Russell will become historically important as a Cub SS.

So lets see... the Cubs SWEEP THE PADS!
You've no idea the joy that brings me since they ruined the summer of '84.
Kyle Hendricks continues to amaze.
His mug along with Jake Arrieta and Kris Bryant adorn the stats page at ESPN.

And I'm in Wisconsin where there ain't no wifi yet I still got the night games on my AM radio.
Here's what it looked like here this morning: 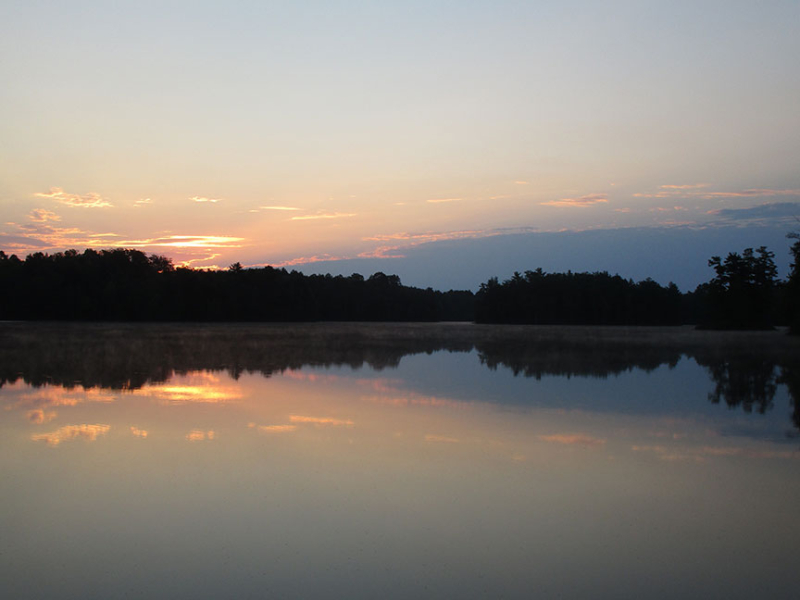 Still no sign of Mr. Musky, but whatever dude - it's the Greatest Summer Ever. 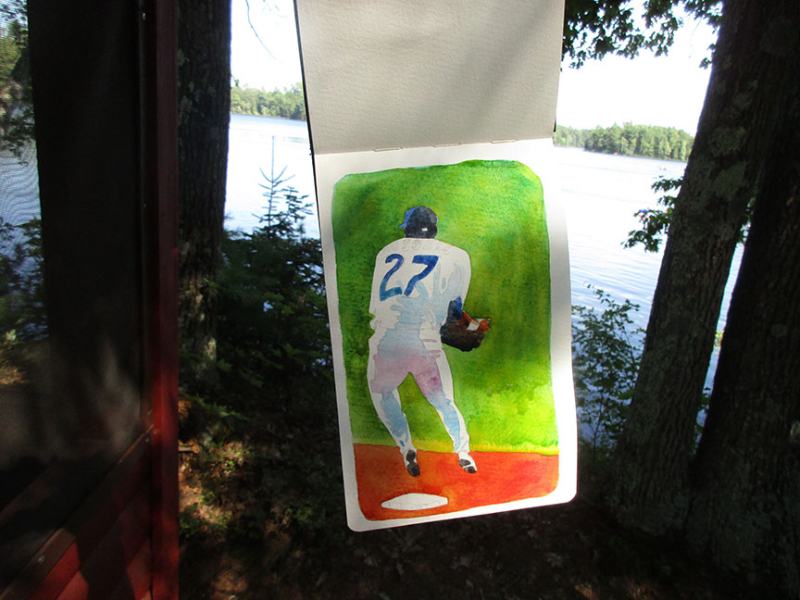 Cubs Lester would prefer to play tonight's game without any E's. 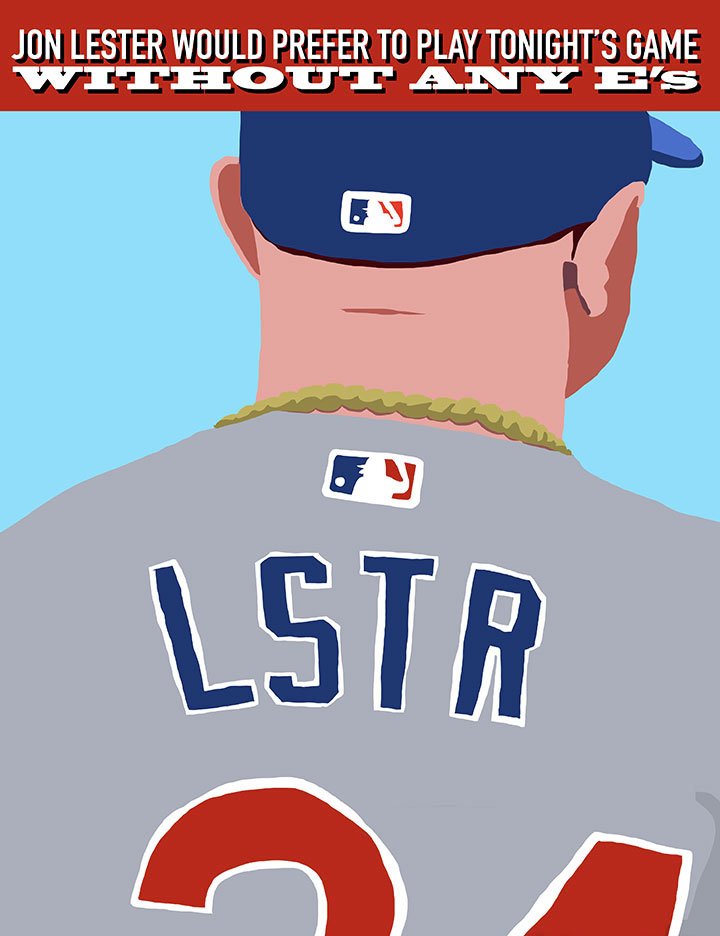 Tonight it's Jon Lester in San Diego vs ex Cub Edwin Jackson, who gave up 8 runs over 4 innings his last time out, probably thinking ahead to tonight's game.
He actually shut out the Pirates and beat the Brewers just before that, so...
Go Cubs.