Rondon then Chapman = New Chicago Rules. The Other Team only gets 21 outs. 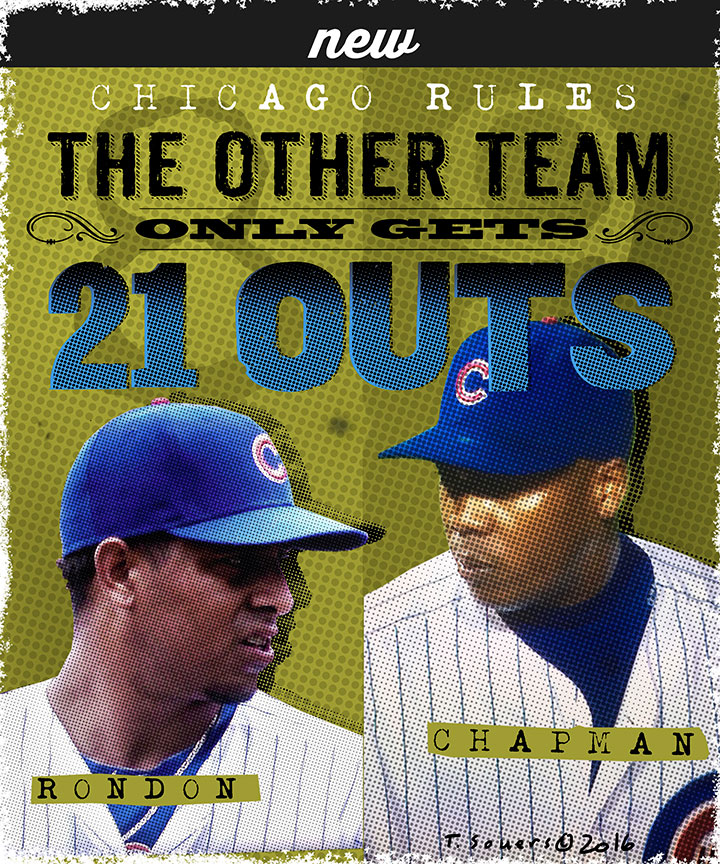 Last night was all about one thing: power.
The bats woke up and put on an awesome display with Kris Bryant, Javier Baez and Addison Russell all knocking balls out the park.
And then came the 8th inning, which showed Hector Rondon in his new role as the 8th inning guy.
Followed by our first sighting of Aroldis Chapman in a Cubs uniform.
You know, I love Lee Smith and wish he'd get in the hall.
But if you were around back then, it wasn't an automatic proposition when he came in.
You never really felt like, "Oh this thing is so over now that Smith is in."
Instead, you got a little itchy.
Nervous little tweaky things going on with your eyelids and corners of your mouth.

Last night, when that first pitch came in at 101 MPH, everything changed.
That kind of guy in a Cubs uniform is not anything like I've ever seen.
We have, and I've read this so many times now, the most dominant closer in the game.
And the whole time I thought that it was all about defense and shutting down the other team.
But last night I had a revelation which probably every single other Cub Fan thought of immediately (whatever I'm just the art guy).
What Theo Epstein did when he signed Aroldis Chapman wasn't about the D.
It's about the O.
The bats have been under tremendous pressure, right?
If I'm a bat and all the sudden realize I don't have to put up a ton of runs to win, that all I gotta do is have the lead at the end of inning #7, then... I can relax a little.
The other guys?
They only get 21 outs.

And last night the Cubs only needed 24, since the score was 8-1 after the top of the 9th.
Can you imagine how good the Cubs would be with Schwarber?
Anyway, I look forward to the rest of the season knowing that a late lead means the game's in the bag.
Chapman.
Everything changed.
Go Cubs.

I read this morning that Chapman threw 12 fastballs that were 100+ MPH. That's the same amount of 100+ MPH pitches that the Cubs have thrown collectively since 2008.

Zero effs given. This guy shores up our bullpen anxiety. Greatest summer ever. Walking around sporting a chub all day...

Don't know if you watch Breaking Bad, but if you do...

So yeah... we now pretty much have the Walter White of closers.

Kevin that. is. hysterical.

Watching the late offensive output and the triple digit heat by our new closer, I'd say most of us had a Cubby Blue Vein Throbber. Ok, I'll endeavor to ease up on the schmeckle references...

I think the Cubs are hoping that Strop will take care of the seventh and the opposition only gets 18 outs.

Whether that works out or not, giving them only the 21 outs is pretty damn nifty.

I'm not looking anything up, but to me Strop seems to be either on or off, and nothing in between.
Like, if he doesn't have his best stuff, he falls off a cliff.
When he's on, however, yeah he'll take those 3 outs away.