But that's what Will Smith and the Brewers did, and Anthony Rizzo made them pay.
He reached on down and smoked a double split perfectly between right and center.
That guy you put on first?
Kris Bryant?
He runs like the freaking wind.
He almost crossed the plate before the Brewer cutoff guy caught the ball.
Cubs 5 Brewers 4.
Cut to Rizzo on 2nd.
He's kind of pumped.
You and I scream our heads off.

What else?
Joe Nathan.
41 year old Joe Nathan.
Coming back from surgery (I can't stress enough - read "The Arm" by Jeff Passan because it's amazing and you'll know so much more about surgery and coming back from it).
The last time he threw a pitch, about half the Cubs were either rookies or still prospects.
He struck out Ryan Braun, Jonathan Lucroy and Chris Carter.
That's kind of a nice thing to happen, right?

What else?
Addison Russell left with a "left heel contusion".
Crap.
I wonder if it's on the bottom or on the side.
Either way, that sounds like it hurts.

What else?
Ben Zobrist.
2 for 3 with a walk and 2 RBIs.
Day before 2 for 4 with a run scored.
Maybe he's finding that mojo again.

Lastly.
Sox for 4 games starting Monday.
Chris Sale with the cutting up of retro uniforms and getting suspended by the team for I think 5 games.
I'm a dad.
I'd call that a time out, wouldn't you? 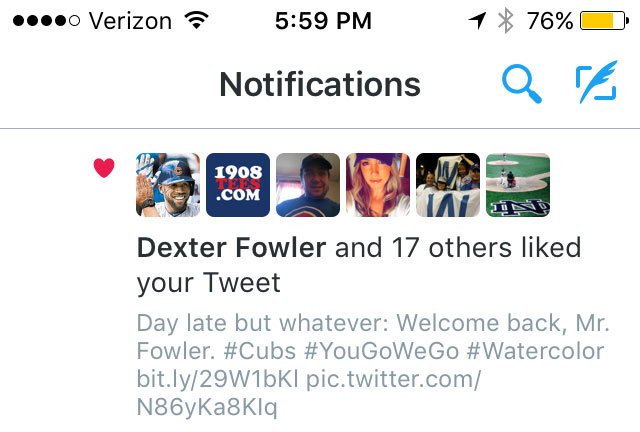 Wow...I missed the pass to KB to get to Rizzo!

That's a call that either makes Craig Counsell a genius if it works or an idiot if it doesn't work. Best of all, the genius/idiot call is made by Mr. Rizzo himself. Wanna bet that Counsell NEVER makes that call again?

Next up in today's news is that it appears we're going to "rent" Aroldis Chapman for the rest of 2016. So long to Gleybar Torres and Adam Warren (and some others). And I don't know how this sits with Hector Rondon? But, holy shit - 105 mph is hard to pass up!

Big day yesterday, Bud.
Now it's Tuesday.
I wonder if we see our new closer tonight?