Rizzo's inside the park home run. Just get the hell out of the way. 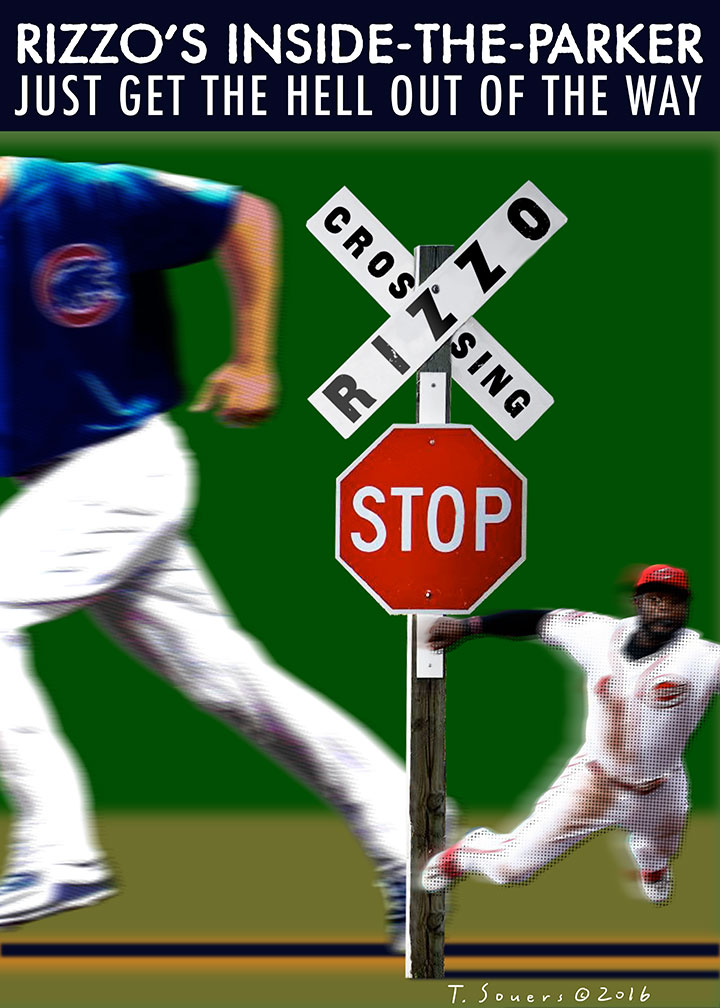 Good God.
Anthony Rizzo's first inning inside the park home run.
Did you see it?
Did you see him on the basepath?
Can you imagine having to tag him out?
He's HUGE.
And he runs like Mack Train if Mack made trains, or a bull in a china shop if a china shop had opposing players for delicate dishes.

3 to nothin' and if you're the Reds nobody's even been up to bat yet.
And to have Billy Hamilton catch the ball in the face on the play... that had to be pretty discouraging.
They couldn't just say "We give".
But it felt that way, watching.
Cubs 9 Reds 2.
Addison Russell went deep and so did Albert Almora for his first one in the bigs SUPER COOL!
Kyle Hendricks goes 6.2 and 108 pitches to help the bullpen rest after the 15 innings the night before.
And Carl Edwards Jr.
Correct me if I'm wrong, but I'm almost positive he was on the playoff squad last year, but didn't make an appearance.
I think this year will be different, and he'll end up with a meaningful role.
Even if he looks like a high school basketball player.

Gotta run.
Tonight it's the Dog Ass Mets in NY for 4 games of awesome pitching match-ups ending with Lester vs. Thor.
Too bad it's not in Chicago, but still it's gonna be a Fabulous Fourth.

To Cubs Joe Maddon, this is all just a game. Hey, wait...

Oh MAAAAN.
The disappointment of Jon Lester's masterful 7.2 innings of 3 hit ball with just the one dinky run given up (a homer from Billy Hamilton of all people)... a 2-1 Cub lead... only to be dashed by Hector Rondon in the fail-save role.
Cubs and Reds go into extras tied at 2.

Then, innings of nothing as no one could hit any reliever and each team used their whole bench.
But that's where Joe Maddon may have a leg up on everyone.
'Cause he plays baseball like it's a game, and he's got a joker in his deck:
Travis Wood.
"One of the best athletes on the team."

Okay so it was the 13t inning, Trevor Cahill had done a great job in the 12th, but now he gives up a couple singles and there are Reds on 1st and 2nd with just one out.
And Joey Votto up to bat.

First, Maddon took out Cahill and put Joel Peralta on the mound.
And he also put Wood in left.
What in the world?...
Then a miracle double play line drive to Ben Zobrist ends the inning.
Top 14.
Baez - a nothing pop up to 2nd.
Szczur - a grounder to short.
And then it's Wood, who hits a fly ball to left and while it was an out, it was probably the Cubs' most well-struck ball in the extras so far.
I felt change in the air and...
The real fun begins now, because this is where Maddon began to play Twister.
With Wood in left, righty Spencer Patton comes in to face Brandon Phillips.
Out.
Then, left hand pitch - Wood pitches while Patton plays left.
Out.
Then, left hand left - right hander Patton pitches while lefty Wood plays left.
Out.
What just happened?
Pure fun.
With the added benefit of actually working.
Cut to Travis Wood in the dugout laughing.
Maybe he knew this would be The Big Inning.
Because then Zobrist walked, Heyward singled and Bryant knocked in Zobrist with a single.
They walk Rizzo on purpose to load the bases and get to... Jason Hammel.
Who grounds out, which set the stage for Javier Baez, who honestly looked like a man who would swing at anything last night.
Which he did again, only this time the ball went 430 feet straight over the center field wall.
Now it's Cubs 7, Reds 2.
And with lefty Wood on the mound and righty Pedro Strop in left, 7-2 is how it ended up ending.
I can't say this game was all fun - in fact it elicited the full range of fan emotion both happy and not.
But it ended up the right way, and damn was it ever entertaining.

Cubs still in front of the Cards by 10.
It's almost July.
It's the greatest summer ever.

Would Kris Bryant's 3 HR, 2 2B performance have been better with a bat flip? 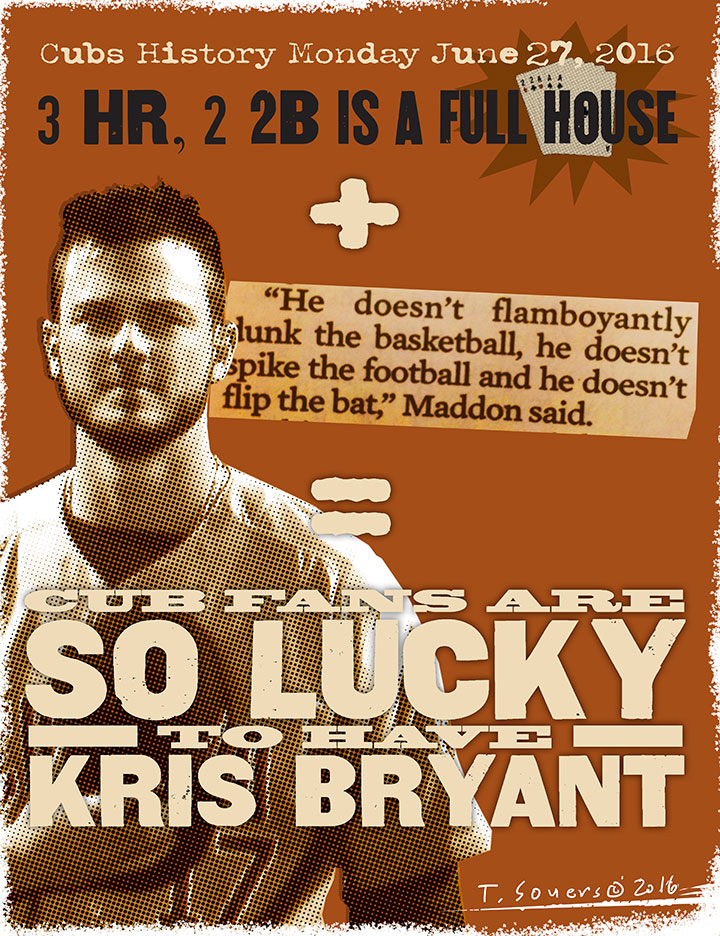 How can the Marlins beat the Cubs? Lord nose. 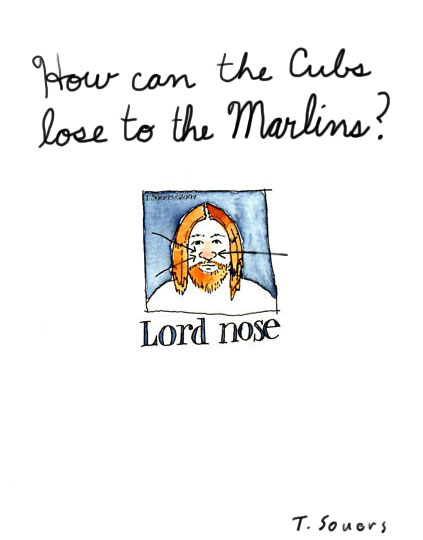 This little bad patch is annoying but don't let it wreck anything.
Long road trip, guys are hurt, the bullpen is being tested.
So pay attention - maybe Patton or Conception just have jitters and really they're the 2014 Neil Ramirez just waiting to happen.
I doubt it, and surely there will be a trade coming up, but if I'm Theo/Jed/Joe, that's partly what this time is for.
See what we got.
Rest some guys, give others opportunities.

I've got that summer flu bronchitis thing, and I'm a complete wreck unable to pick up a pencil.
I'm going back to bed. 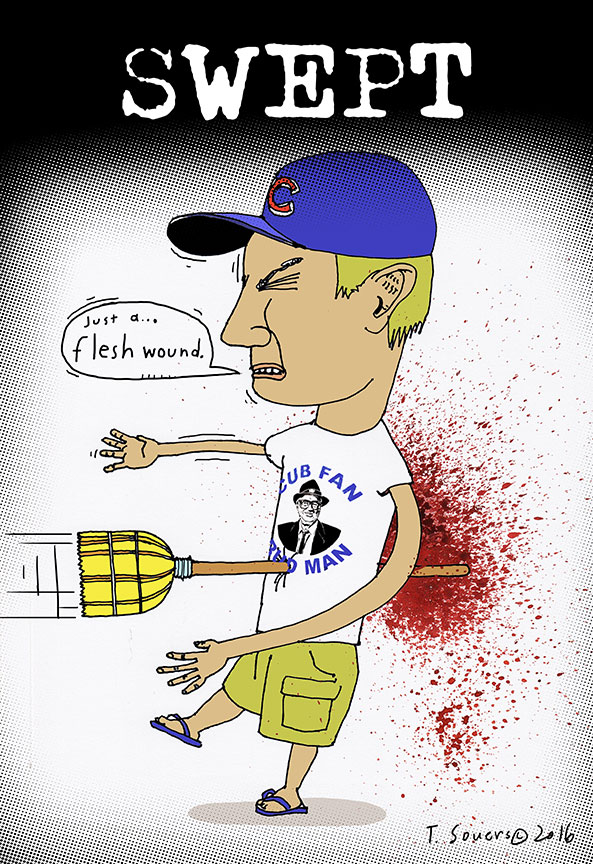 Ow.
Owwwwww.
Okay, just a flesh wound.
Joe told us this stuff would happen.
Everything's fine.
Just... move along.
Cards sweep the Cubs at Wrigley.
Just rub some dirt on it.
It's not bothering the Cubs, it shouldn't bother us.

ps: Miggy Montero left with a knee, but apparently tested fine.
I'm pretty sure, however, that it'll mean an extra start or two for Willson.

Adam Warren gets stretched in Iowa.

Richard, I guess they still see value in his left handedness.
So he "developed a blister" (wink wink) and they sent him down.
Patton's been up already and if you recall he was pretty good this Spring.
Don't really remember Conception, but that's a serious baseball name so cool.
Anyway the news out of all that is Warren going to Iowa to get stretched out so he can start and the Cubs can have a 6-man rotation.
Read it from Jesse Rogers.
Interesting and kinda cool.

Not cool is dropping game #2 to the Cards last night.
But I'm so not letting it bug me too much.
This must be what Cardinal fans used to feel like.
I have supreme confidence and this ain't nothin' but a pothole.
So, don't worry it's all gonna be just fine.

Okay gots to run.
I heard, and I quote, "Possible baseball sized hail" in the midwest, and it looks and feels pretty gloomy out.
Hopefully the Cubs/Cards game happens this afternoon, and the "baseball" hail comes in the form of Kris Bryant and Anthony Rizzo bombs.