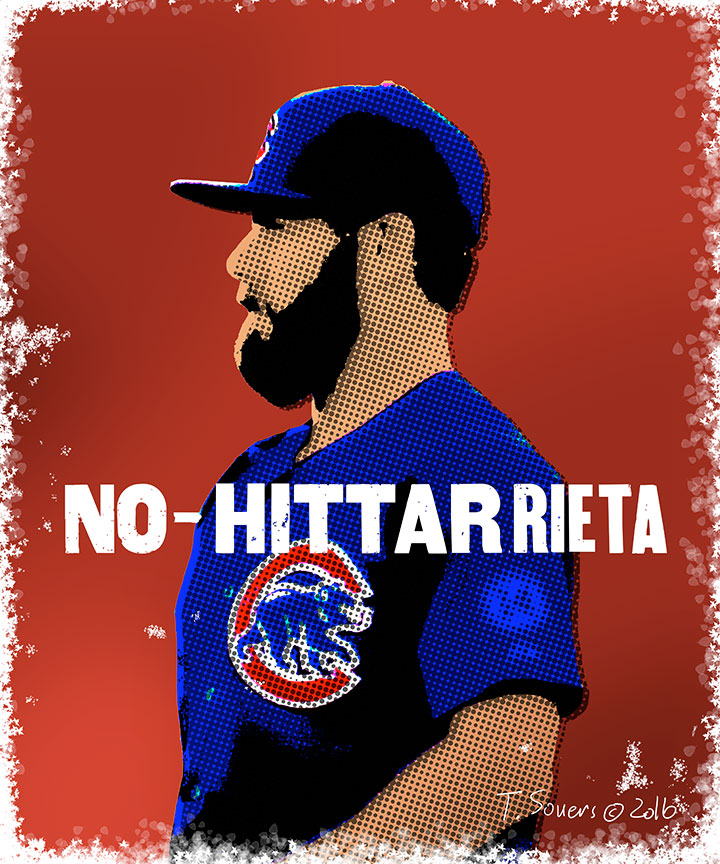 Well, I hope you were watching.
Jake Arrieta threw his 2nd no-hitter, this time vs the Reds as the Cub bats woke up to plate 16 runs.
They beat the absolute SNOT out of the Reds tonight, a night that had 1 Bryant homer, a Zobrist homer, a Rizzo homer, a Bryant Grand Slam... and despite all that I totally thought it was going to be "David Ross Night" since he hit one out too and had all kindsa cool on base stuff going on.
But then...
I was at Sutherland's on Irving and said to the guys next to me, "Maddon made a deal, and Arrieta can't go long any more unless..."
Then the big double play in the 6th, and suddenly it's the 9th inning and poof...
No hitter.
So much fun I'm having a heart attack all the time. 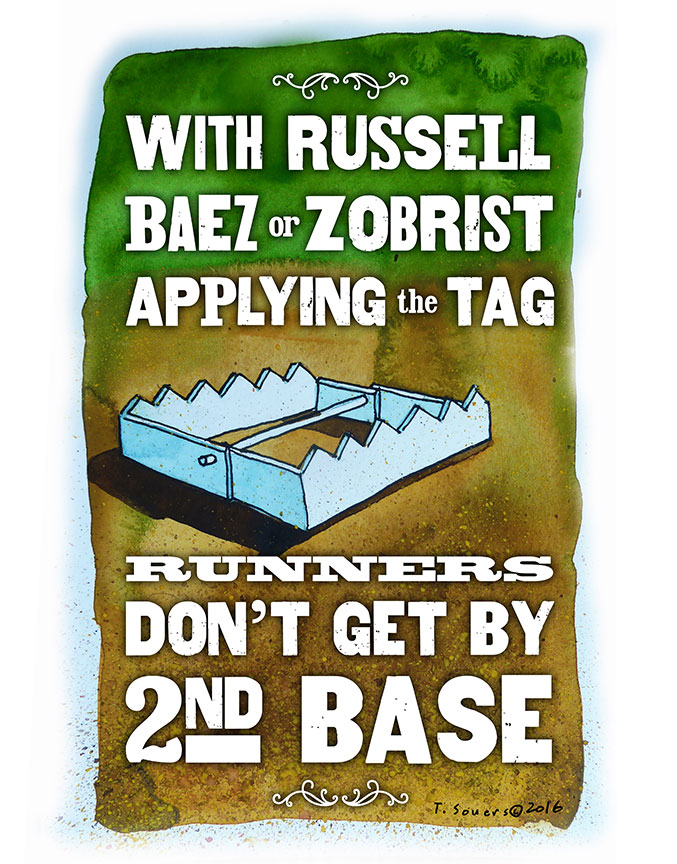 If there's anything I don't miss about Starlin Castro, it's his clunky hands.
His technique was flawed, and his hands were soooo slooooow compared to the guys making those plays for the New Cubs.
Yeah, we saw Addison Russell drop a throw a couple games ago, but overall it's kind of astonishing how much better that part of the game is for our viewing pleasure.
The other day with Lester on the mound and David Ross mowing down 2 runners in a row on some close plays at 2nd... when I watch those I just think back and it's such a world of difference.

You must have been shocked as I was that the game started up again at about the 3 hour mark.
In my head I'd already conceded, and then... turned on the radio driving home.
WHAT! THEY SCORED 2 AND NOW IT'S 3-4?
I sat in the garage and listened to the end.
Bummer about that last Cardinal run, but... you can't not pay attention to this Cubs team for a minute.
Something just might happen.

Last thing and I gotta run.
Dickie the Cardinal Fan has of course been texting throughout the series.
We're buddies and it's all in good fun, especially this...
I'm watching Monday night and it's the first time I'm seeing these new Cardinal kids.
Somebody named Hazelbaker has an OPS of almost 1.000?
I send Dickie a text not unlike I have in the past, saying where do the Cardinals get these guys.
Dickie's pretty proud of that, so he reminds me there are 2 other kids playing too:

And right at that second, Soler mashes a grounder to Diaz at short, he muffs it and then throws 15 feet over Adams' head at first.
I get to reply:

Okay, Cubs go to Cinci tonight and it's Mr. Arrieta on the mound.
I'm gonna predict the Cubs get win number twelve.

Jason Heyward's arm is better than your arm. 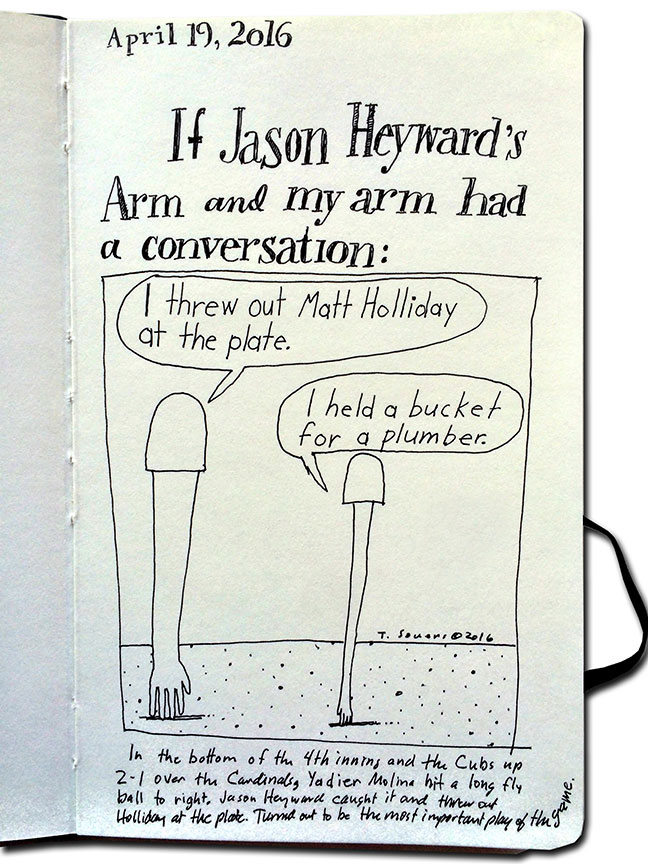 In baseball, there is nothing more exciting than the play at the plate.
Anybody want to argue?
And last night with the Cubs up by one teeny run in the bottom of the 4th inning, we were treated to kind of the ultimate.
Did you know the Cubs were playing the Cardinals?
Yeah kind of a big deal so early in the season.
So Hammel's on the mound, one out, and he'd just given up a serious smack to Matt Adams, who was standing on 2nd, which also moved Matt Holliday from 1st to 3rd because he led off with a single.
It is tense.
And now it's Cub Killer Yadier Molina at bat.
He hits a high one out to right. The camera follows the ball but you know Holliday already trotted back to put his foot on the bag and the 3rd base coach already said, "You're going."
But a ball hit to right is a ball hit to Jason Heyward.
And he's setting himself up so he can run forward, catch and throw with all his momentum, but he seems a little.. off line.
But whatever.
He catches it.
I bet you had unconsciously gotten up off the couch and found yourself standing in front of the tv.
Then he throws it and you don't even have time to breathe as it skips once in the infield and into Miggy's glove, who turns to sprawl and tag Holliday just before he gets home.
Neighbors or other people in your building think what in the hell is going on with the yelling.
Holliday knows he's out - there is no argument - and he walks off with Matt Adams because the inning is done.

Earlier that day I spent time waiting for a plumber to fix a stopped up sink, and when he got there he asked me to hold a bucket while he undid some pipes.
At the time my arm felt involved and important to the process, but later... after Heyward's throw I said to my arm, "You couldn't hold Heyward's jockstrap, stupid arm."

Cubs Lackey puts the clamps on the Cardinals. (gif)

What an awesome evening of baseball!
Game number one of my favorite rivalry in sports goes to John Lackey and the Cubs as they shut out the Cardinals 5 to nothin'.
The Cards had been kinda hot, and Lackey just shut 'em down.
Conversely, the Cubs had just been shut out for the first time (by the Rockies).
And while we're still waiting for Rizzo and Heyward to go on a tear, the Cubs knocked in 5 including the line drive homer by out of his head Dexter Fowler.
Mike Leake was cruising, but then kinda came undone in the 7th when he gave up singles to Bryant and Montero, then Soler fielder's choiced Bryant in, Russell sac flied Montero in, and then the dagger was Lackey himself smacking the RBI single.
Lackey came out in the 8th having struck out 11, and Wood/Strop/Cahill did the rest.
Gorgeous.

Dexter Fowler is playing out of his head. 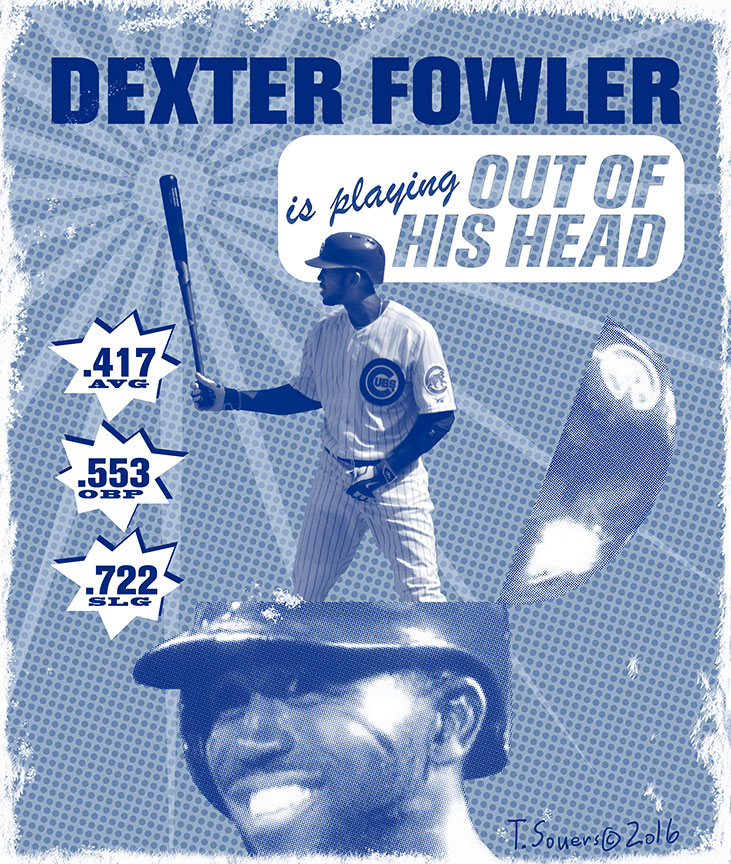 How would the Cubs be pulling off this incredible start to 2016 without Dexter Fowler?
Yesterday against the Rockies we saw back to back homers from Anthony Rizzo and Jorge Soler, and with Jake Arrieta on the mound that's enough.
(I'm still trying to get used to the fact that the Cy Young Award winner is a Cub... he's just so damn good.)
But we know he's not pitching 9 any more.
Or at least not til late in the season.
So when Dexter Fowler hit the 3-run dinger in the 7th making it 5-0, didn't you feel a whole lot better?
I know it's a small sample (I always think of Ryan Braun peeing in a cup when I hear "small sample"), but Fowler brought a whole bunch of energy to the team when he surprised everyone by coming back, and he continues to do it now.
36 at bats, 15 hits, 6 of 'em for extra bases, and 9 RBIs from the lead-off spot.
Among the starters, Fowler's 1.275 OPS leads the team by a mile.
No, not sustainable but whatever - he's playing out of his head and it's a really nice time for that to happen.
Cubs 6 Rockies 2 on a day that felt like mid-May outside.
Just gorgeous.

Did you see the error-filled monstrosity on Friday?
The bad 1-6 loss?
That was me, sorry.
Went to the game with Cubnut, only I couldn't get there til very late.
I was hauling into the park, walked up to the upper deck and came up for the photo from behind the plate.
I just sort of ran up, pointed the camera and shot, unaware of what was going on with the game.
So, my first photo from Wrigley Field in 2016 is of Jorge Soler about to be thrown out at the plate: 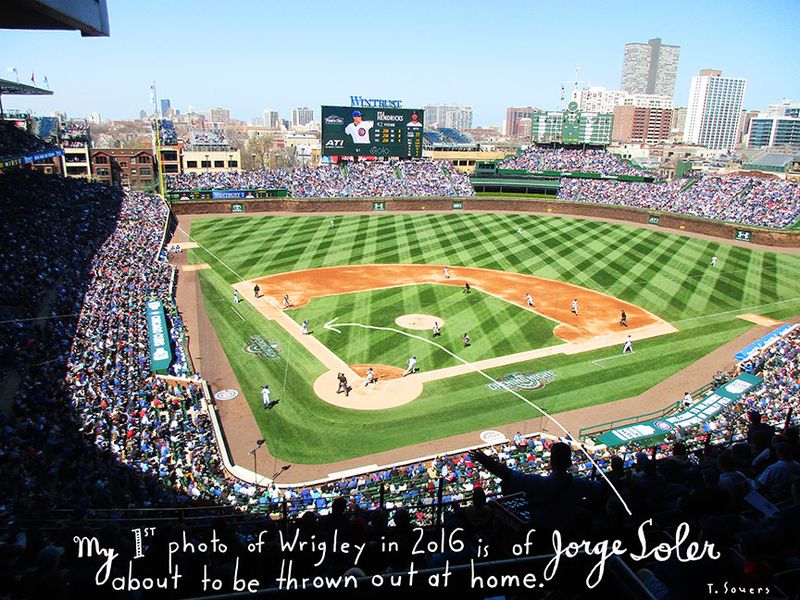 I have the BEST Cubs' Karma I swear.
But I'll tell you what - seeing the green grass and all that blue sky does wonders for one's soul.

Okay, couple hours from now it'll be Jon Lester v Tyler Chatwood (1-1, 4.38) and it could not be more beautiful out.

Cubs are like the Zombie Apocalypse for Reds' Alfredo Simon.

Did you see the first inning of the rout last night?

Like a horde of zombies, the Cubs just chewed Alfredo Simon up like an appetizer.
49 pitches, 3 walks, 4 hits, 5 runs, only 2 out when he left in the first inning, a mere skeleton of his former self.
So wonderful to watch.
No time to chat, gotta run but what a fabulous 9-2 victory over the Cincinnati Reds.
Go Cubs!