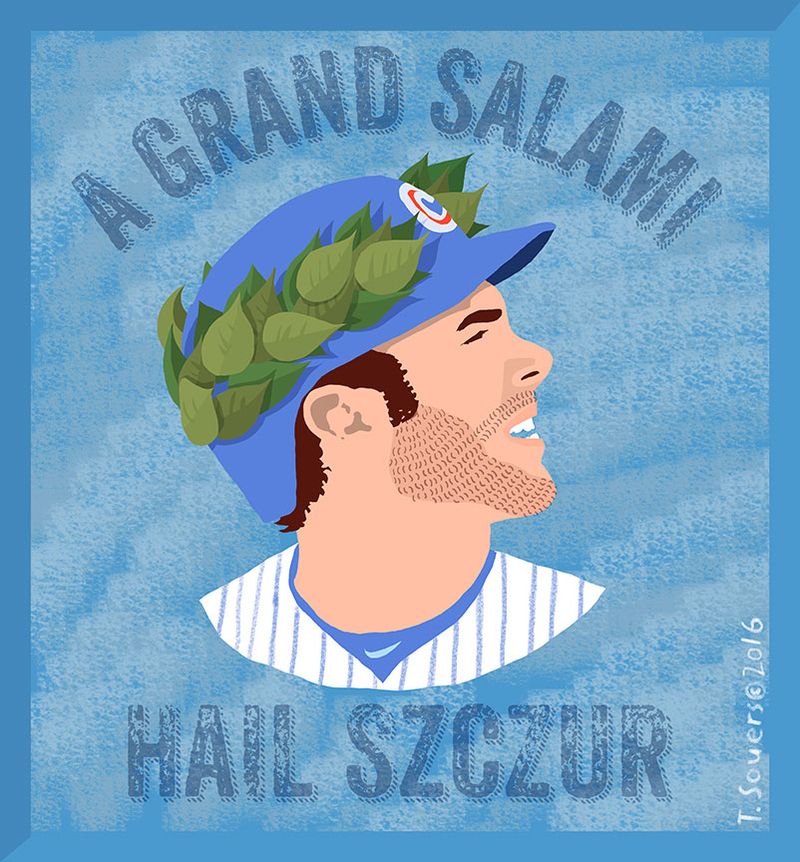 I shoulda had this one laying around, right?
Some kind of "Hail Szczur" illustration for just this purpose.
Szczur hit a grand slam off the Atlanta Braves' Chris Withrow in a pressure packed at-bat just after the Cubs had taken a 1-run lead.
One out, bases loaded.
Anthony Rizzo had just knocked in a run with a single.
Szczur had just been put in for Soler at the top of the inning when the game was tied 1 up.
And of course you maybe couldn't help but think man I sure wish it was Soler up instead.
But that thought went away pretty quick.
Grand Freaking Salami.
Had Emily's radio on in the office, and it got a little loud there for a minute.
If you weren't a Matt Szczur fan before, you gotta be now.

Jon Lester was awesome again, this time with 10 Ks and just the one run in seven innings.
Of course, he had another hiccup fielding a bunt that I'll choose to ignore.

Cubs have won 4 in a row and lead all baseball with 17 wins.
More Braves today.
Go John Lackey and Go Cubs!

A little round of applause for Jake Arrieta's scoreless innings at Wrigley.

This was an amazing streak, even if we were all just sort of used to it.
Nobody scored a run off Jake Arrieta at Wrigley Field in fifty two and two thirds innings, a Wrigley record and the 2nd best all time behind some other guy ("White Sox Ray Herbert had a longer streak at 54 scoreless innings at Comiskey Park, spanning 1962-63." from the article linked below).
In addition, we get to put him in a sentence with Bob Gibson: Jake Arrieta had 24 consecutive quality starts, while Gibson still holds the record at 26.
I know its true since I read it ohhh, everywhere (but here's as good a place as any).
So... Bob Fuhreeeking Gibson.
The guy who had a 1.12 ERA in 1968, and MLB thought it was so unfair they lowered the height of the pitching mound from 15" to 10".
And our guy Jake.
Amazing.

So, what else...
The Good:
Dave Ross hit a homer thru the cold wind ALL THE WAY OUT TO WAVELAND yesterday.
Ben Zobrist went 2 for 5 and knocked in 2.
The Cubs beat the Brewers 7-2 to sweep their shortened series 2-0 and our favorite team is now 16-5, which is the best record in baseball.
(Pretty soon we're gonna be hearing about a subway series as the White Sox have the 2nd best record at 16-7).
The Bad:
Kris Bryant "rolled" his ankle and will have it MRI'd today.
Supposedly a "mild sprain", which gave me a "mild hurl".

And today the Braves and their worst in baseball record of 5-17 come to Wrigley.
Then it's Pittsburgh and Washington.
A huge Cub Fan (Bob) living in Colorado sent me a note saying that if everything stays on schedule, Jake Arrieta will be pitching against Max Scherzer on Sat May 7th.
But... not looking ahead, right?
Today it's Lester vs. Aaron Blair. Here's his whole history... 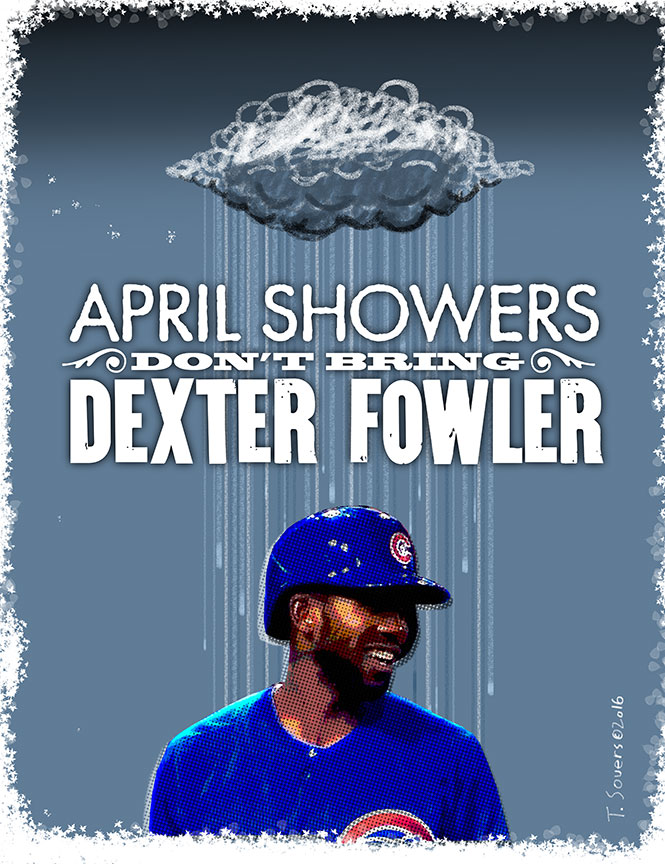 Well the only thing that could possibly be more maddening than a rainout is someone getting hurt in a cold, wet game.
So okay, call it.
Move Jake Arrieta's start to today and lets hope this crap clears out.

PEDS.
And Jake.
Haven't you been waiting for someone to hint at the best pitcher in baseball being on steroids?
Of course some one would say that, but whatever.
He's handling it so well - he can't ignore it, right?
So he's saying all the right stuff just like the totally open guy he is.
After the last no-hitter when he immediately said he didn't have his good stuff - surely some thought "what an asshole".
But that guy is just honest.

Blackhawks.
They lost.
It was an amazing series and they came this close to moving on.
But they didn't and I say ahhhh.. now you guys can relax for a nice extended time and heal. 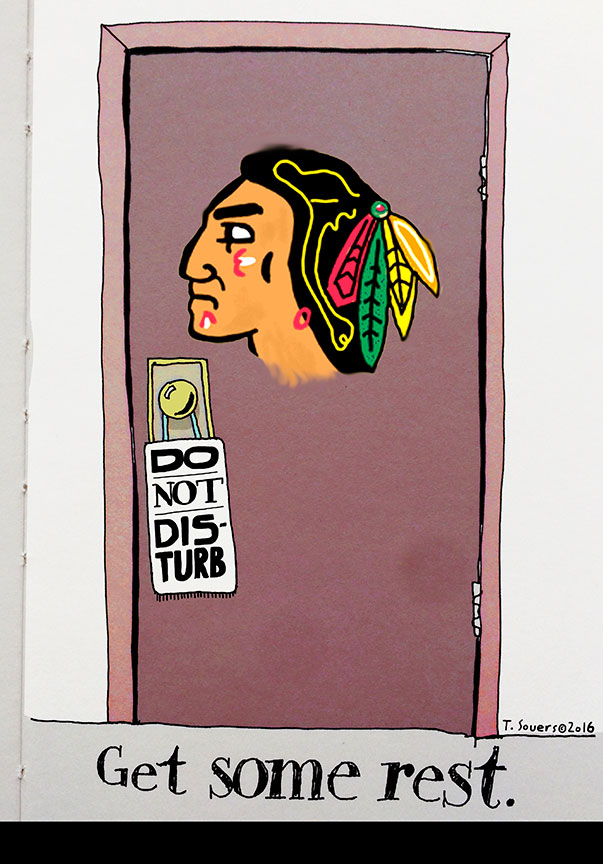 The only drag would be if Andrew Shaw goes away.
We'll see.

In the meantime, the Cubs have to keep concentrating and win these games against the teams they should beat.
Given how crappy so many of the NL teams are this year, that may be harder than we can imagine.
Like, I'm already thinking about Pittsburgh, which comes after the rest of Milwaukee and Atlanta, who both are not good.
That's okay for me and you, but not the team.

No time for nothin' but a gif today.
Except Javier Baez.
What an amazing athlete the Cubs have for a backup! 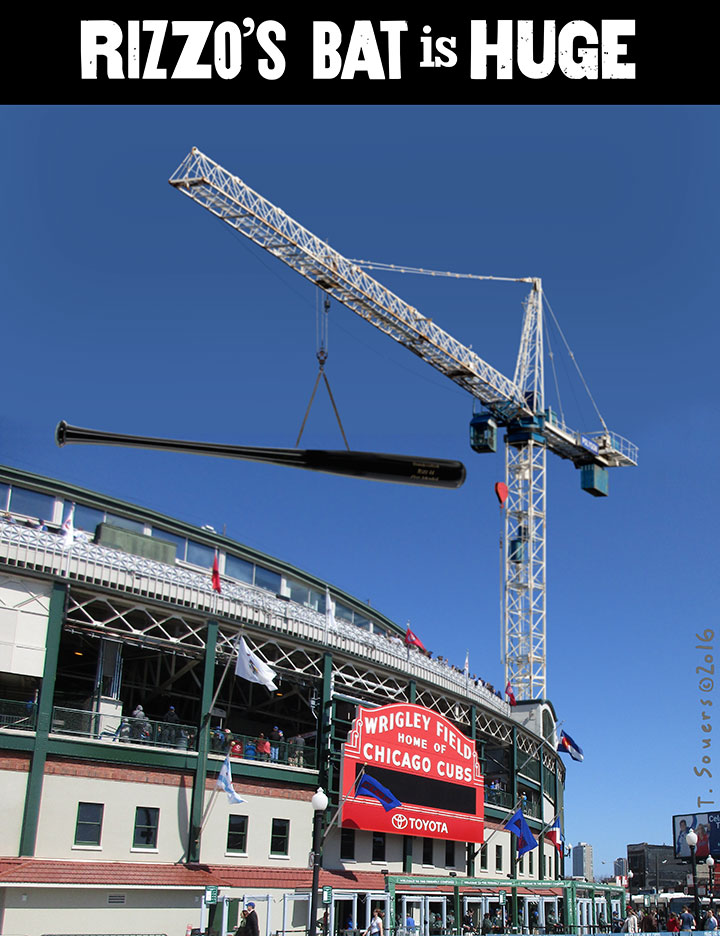 I swear, they gotta carry Rizzo's bat in on a crane.
2 more homers yesterday vs the Reds, he's 1 behind Bryce Harper and tied with yesterday's news Trevor Story at 8.
You gotta screen-grab these things because it's fun and they change as the season goes along.
Look:

There's a Cub in all the leader categories, but of all of them this is the funniest: 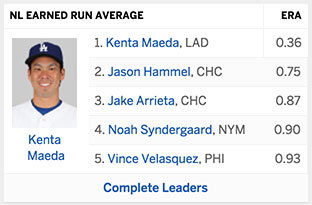 Yeah, Jason Hammel has a better ERA than Jake Arrieta.

Anyway, my buddy Flack came up from St. Louis and we watched with Scott and Ashley over at Jake's Pub.
That, my friend, is one fun afternoon.
Never any real doubt about the game since the Cubs came out kinda Cub-like and put up 8 in 3 innings while Hammel mowed 'em down for his 6 innings.
Then Warren, Wood and Rondon took the last 3.
And how about Tommy LaStella coming off the bench to spell Zobrist and going 3 for 5 with 3 runs and a homer!
Not bad.

Now it's a day off and then the Brewers come to town Tuesday.
Lastly... Game of Thrones started!
Jon Snow was still dead. 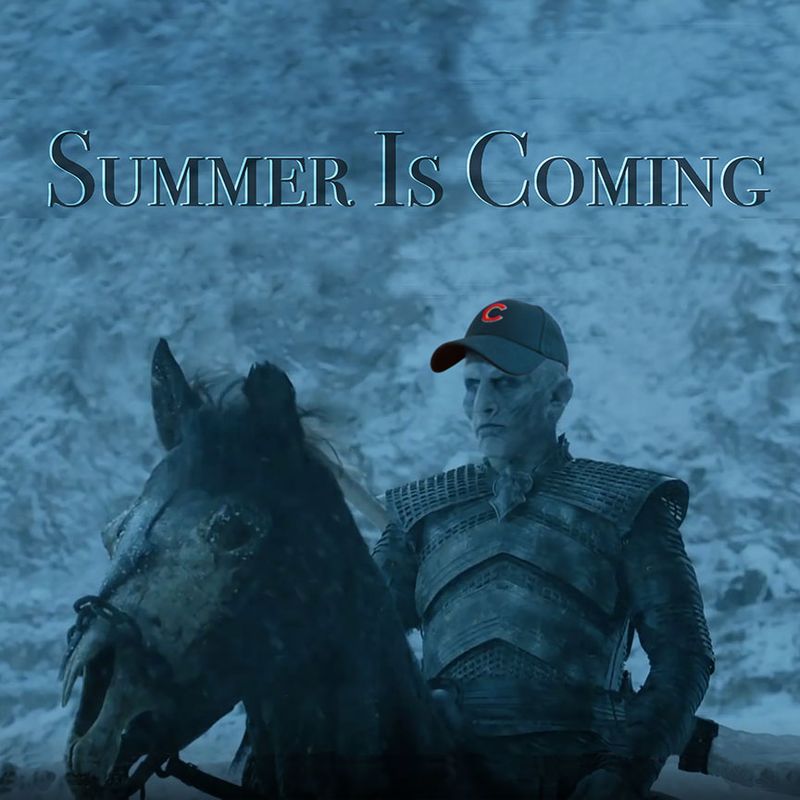 The evolution of prime time television is so amazing.
For me, Twin Peaks is where TV first went from episode to episode and instead told one long story.
And now the biggie returns on Sunday night.
Game of Thrones.
Where for years now we've followed plots and subplots, fallen in love with characters, watched them die and be replaced by new ones.
Sounds familiar, right?
Like that other show we've been watching for a hundred years called "The Chicago Cubs".
But... take what just happened in Cincinnati.
Our favorite team is turning into another thing.
Yeah yeah, it's only April but man... they're... scary.
I never paid attention to this number because it was always red and depressing, but have you noticed the run differential?
It's the red or green number in the standings.
The Cubs have a 67, and it's green.
That means the Cubs have scored 67 more runs than they've given up - they've scored 105 runs and given up 38.
In all of baseball, only 14 teams even have green (+) numbers, and after the Cubs' +67, the next two are the Nats +31 and Cards +28.
The Cubs have a +8 run differential over the Nats and Cards combined.
That's just bad ass.
When's the last time you said that about a Cubs team?
Not to mention that one of their huge weapons, Mr. Schwarber, is out for the season.
And this isn't just bats.
The Chicago Cubs have the best ERA in baseball.

We'll see where that is later in the year, but this is so... not normal.

Okay yesterday Jon Lester shut down the Reds 8-1, so a day after the Arrieta no hitter, it's Cubs 26 Reds 1.
And tonight doesn't look any easier for the Reds with John Lackey on the mound.

Summer is coming.
Here's another version of that poster up top... 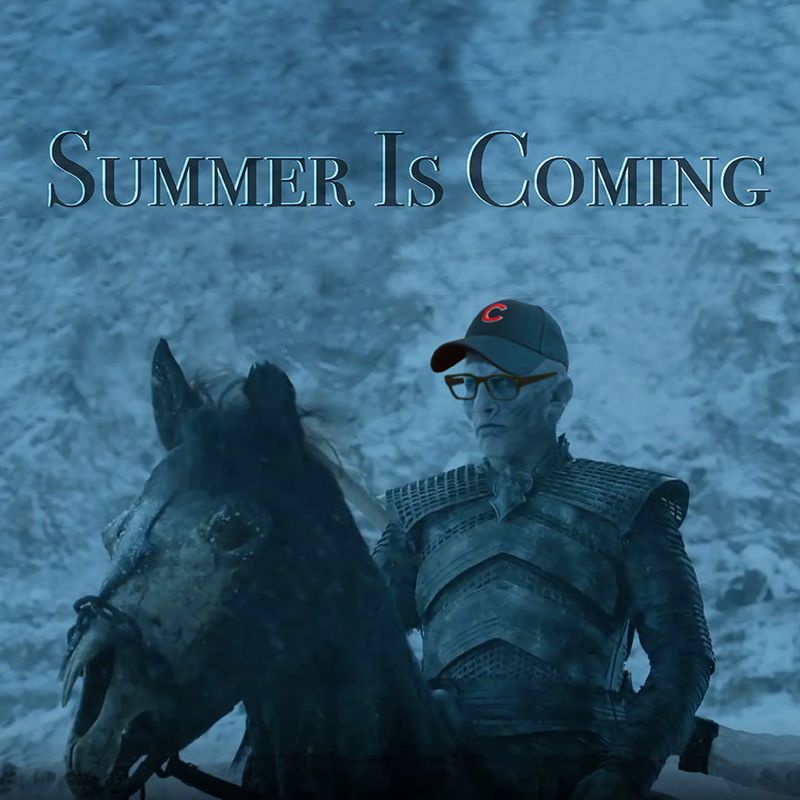 WHAT IF THAT GHOST GUY IS JOE MADDON?
YOU GUYS ON THE NIGHT WATCH BETTER GET SOME DRAGONS.