Cubs Kawasaki has a flair for the dramatic. 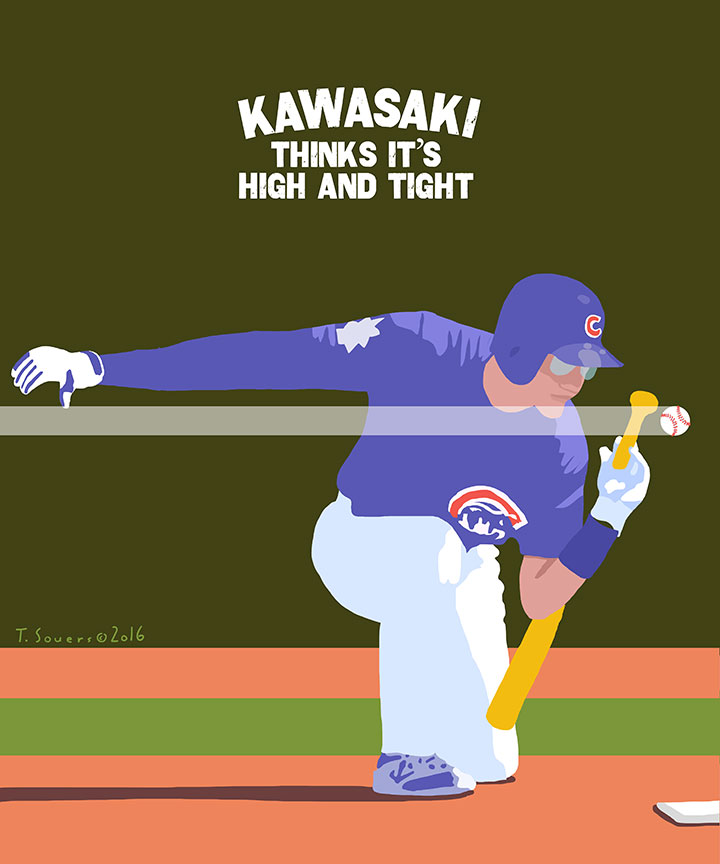 Did you see this play?
Munenori Kawasaki was up to bat and the pitch comes in high and tight.
Kawasaki doesn't bail, instead he poses in a uniquely Kawasaki style, completely keeping his dignity.
Len laughed and said something like, "He does have a flair for the dramatic."
This guy is super entertaining, and you've seen the singing and the fun he has with language - what a blast.
But also, he's good.
Yesterday he went 1 for 3, and this Spring he's hitting .375 with 3 doubles.
I don't know - who are the Cubs gonna keep?
I don't think I've even seen Tommy LaStella play yet, he's out with a calf strain.

Pretty awesome game yesterday.
Lester looked very sharp, but of course the magnified yips are still there (yada yada we'll be talking about that forever).
And Jorge Soler hit one of those home runs that went over the wall before the sound of the bat reached your ears.
He also swung at an inside pitch almost over his head and hit a foul ball that took 10 seconds to come down.

Did you see the "Don't miss a memory" commercials?
I can't
I swear I'm weak with the goosebumps.
We're so lucky to be Cub Fans right now.

Who gets that last spot on the Cubs' roster? 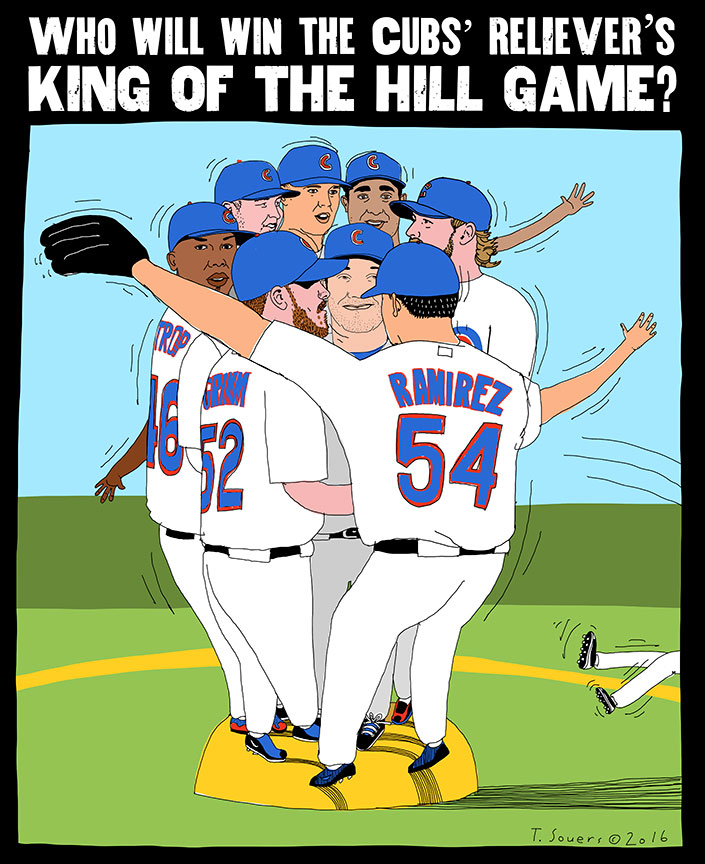 Well, here's something that never happens, and it is AWESOME.
Do the Cubs keep 8 relievers?
Do they keep 7?
Pretty much we're used to... the guy who's on the bubble for the last reliever slot is just some... guy.
Hmmm... should we keep Rafael Dolis or... Phil Norton?
This year, it's Rondon, Strop, Wood, Warren, Cahill, Grimm, Richard and Ramirez.
This year, any one of the Final 8 who doesn't make it - especially Neil Ramirez because he's out of options - will cause me enormous grief.
But because of the lack of options, should the Cubs decide to keep 8, then... a position player's gotta go.
This is so cold, but if that's the case then... see ya Matt Szczur (he's out of optons too).
Here's J Rogers article from awhile back.
John Andreoli's spring makes me feel better about that situation should it shake out that way.

Hey did you get in a March Madness pool?
I did, and it's just so exciting AND rewarding, watching these young men I've never heard of playing a game I hardly pay attention to.
Our pool is... you get 2 teams drawn out of a hat, and they play the spread.
If your team loses but the winner doesn't cover, then you get the other team.
Hey it makes as much sense as me trying to actually pick.
We got a group email from the guy running the pool with some detail about ties, and it started with "Attention all NCAA pool participants".
Here was my response (to the group):
"Hey, I think you accidentally included me on an email that said “Attention all NCAA pool participants”.
I mean… I guess I was a participant, but then the games started.
Anyway, be sure to ask for my $20 again next year.
What a BLAST!"

In other words, I was the first one to lose and drop out of the pool.

Lastly, I got the new issue of ESPN Magazine.
The kind of controversial one with Bryce Harper and his "baseball is tired" article. 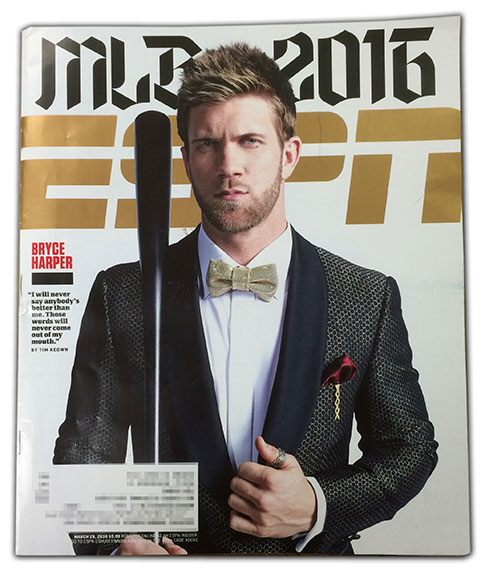 So this is interesting because inside, there are 5 photos of the cover boy, but there are also these photos of people you might recognize: 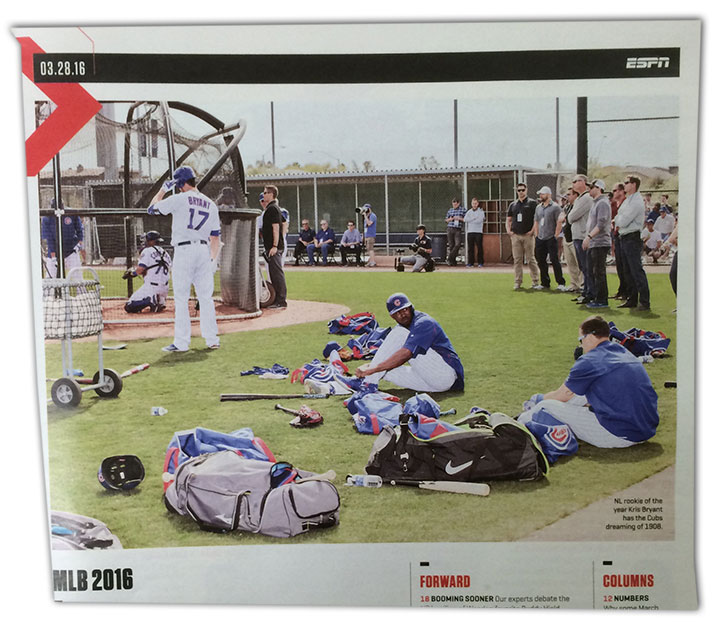 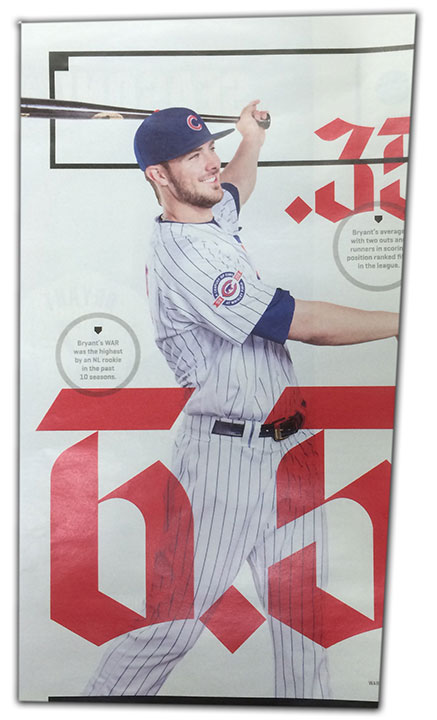 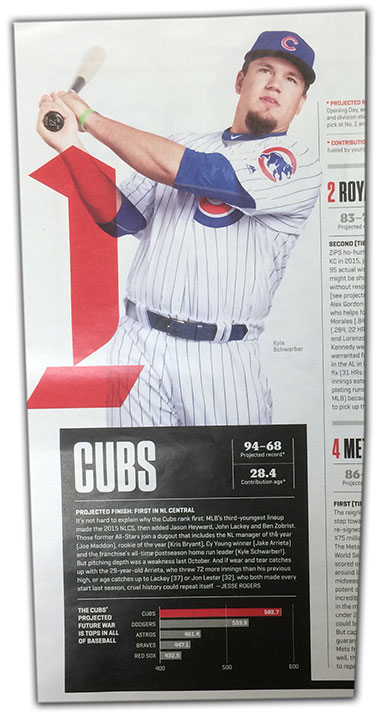 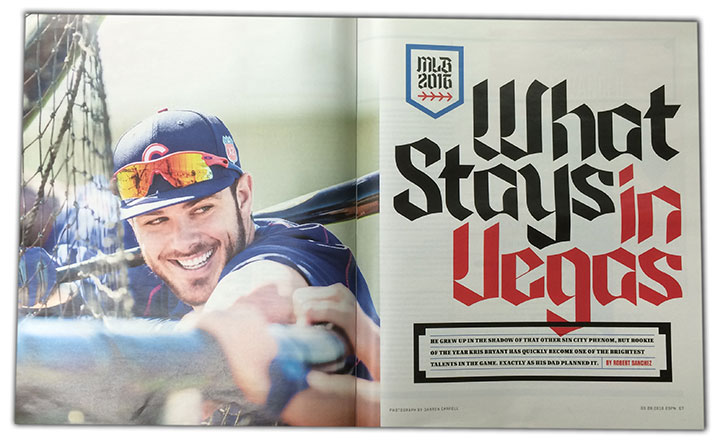 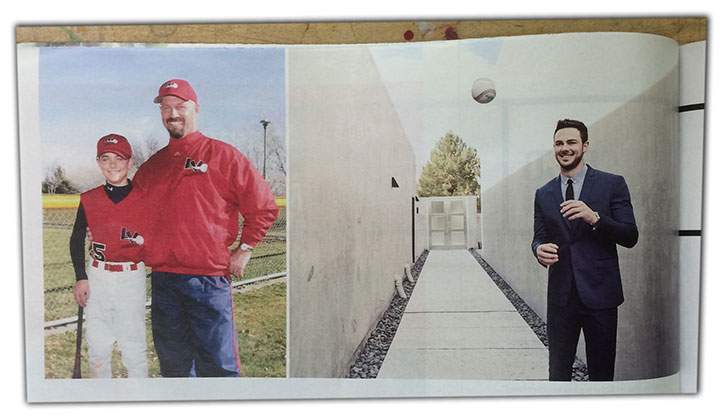 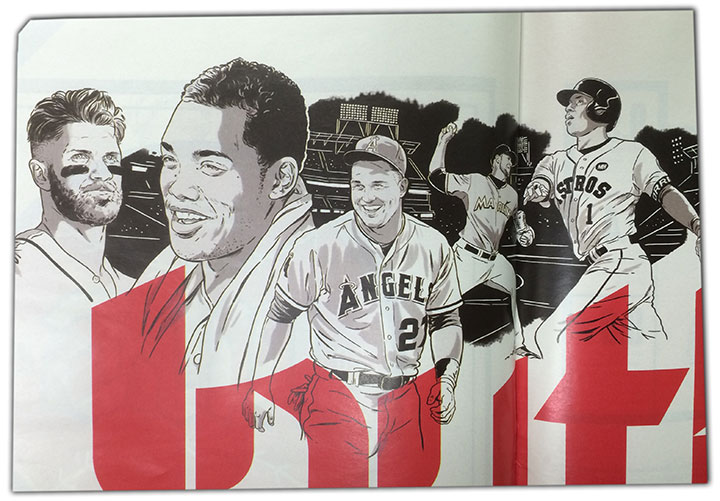 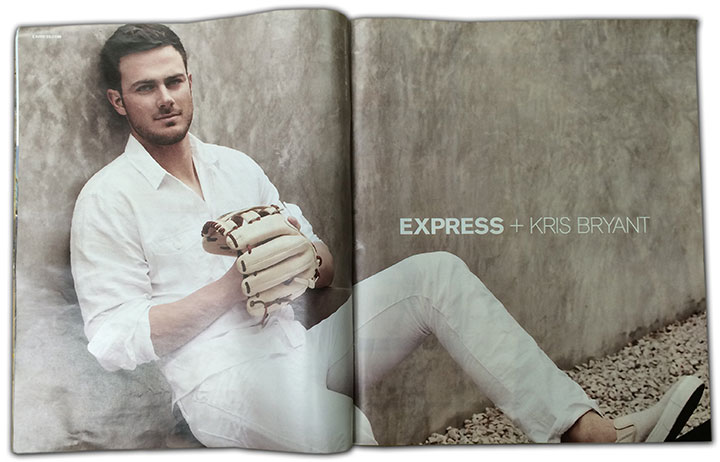 So, I got done flipping through the magazine and thought hey, was that about Harper?
Or the Cubs. 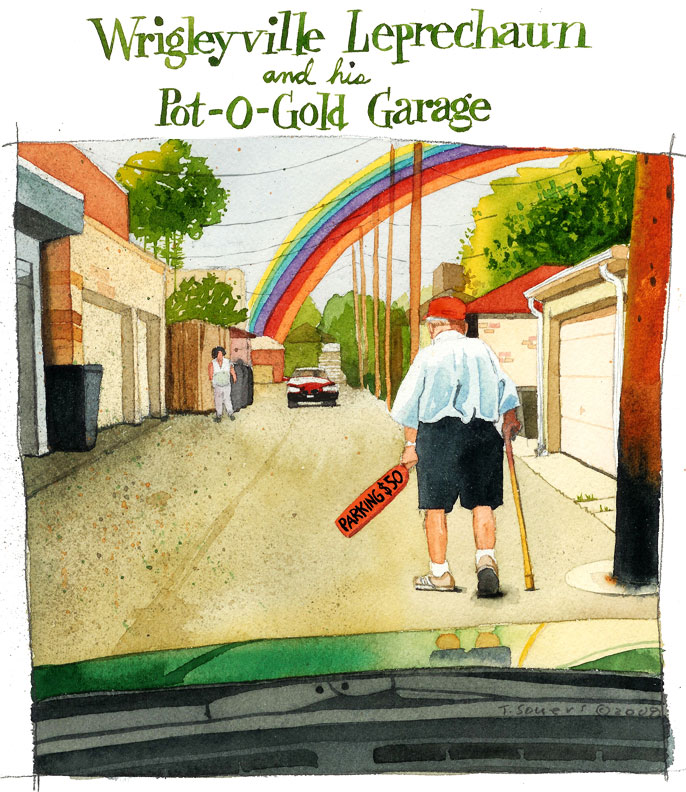 This guy is long gone by now, and I never got his name.
So I'll just call him the Leprechaun of Wrigleyville.
Have you ever parked in one of the many alleys around Wrigley Field?
It's a full blown industry now, with people tearing down their garages and laying down parking spaces that they can charge serious cash for.
Last year I alley parked only a couple times, with my guy Siggy.
And the parking there goes kind of on a sliding scale, depending on how good the Cubs are.
When it was Mike Quade's team, you could talk your way down to $20.
This next year, it'll be out of my price range for sure.
But I've paid $40 before - it all depends on what's going on... how late you are... who's playing...is it a sellout.
And here's the thing with those guys who run the alleys - it's as expensive to park 4-5 blocks away as it is to park in the alleys just west of Bernie's.
So if you try it, drive all the way down to the front row first.
The true benefit is you won't get blocked in - either there isn't room behind you, or you can knock on the guy's door.
Anyway, the painting is from 2009.
The Leprechaun used to have an old black and white portable in his garage, and while I'm all about the hd and giant screens at the park (and in my living room), once in awhile I'll miss seeing a crappy, grainy old black and white image of a Cub game.

Didn't get a chance to watch anything yesterday, but it sounded like John Lackey did well, and Joe Maddon's putting in NL lineups with the pitchers hitting because.. they gotta get ready for that part of the game, too.
About three weeks, Ladies and Gentlemen, til we remove our hats and sing along with the National Anthem on the Opening Day of the 2016 season.
So when you raise a properly chilled pint of Guinness later today, you might thank the Baseball Gods for the opportunity ahead.
Go Cubs. 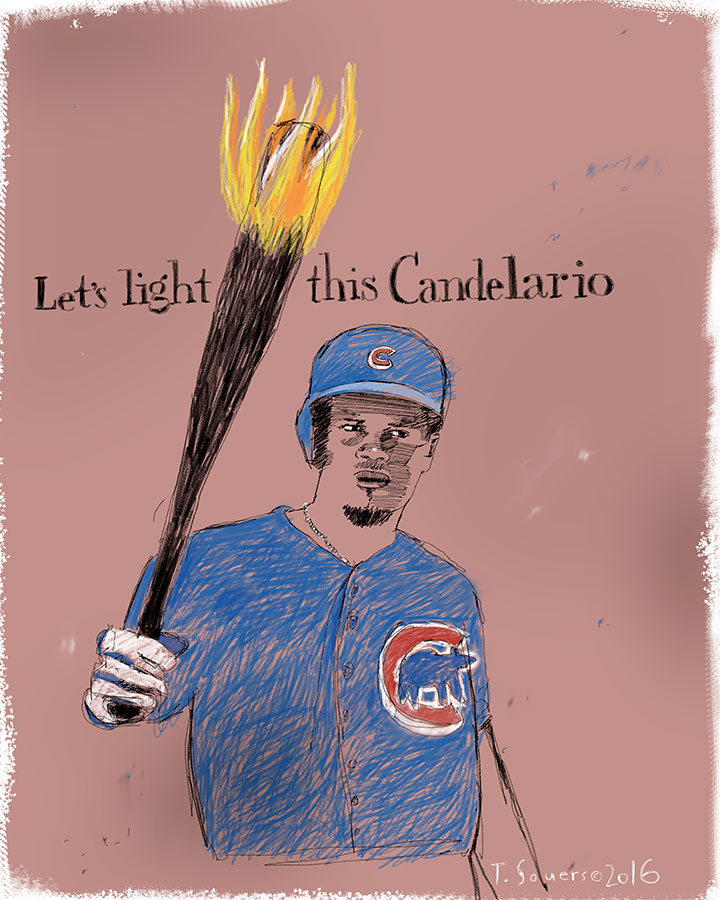 Of all the things to happen during the Cubs' Spring of '16, about the last thing I thought about were MORE prospects looking like they... could be legit Bigs guys.
Jeimer Candelario and his hot bat kinda caught my attention.
So has John Andreoli and Jesus Guzman.
I mean... say it was a more normal year (without Rizzo, Bryant, Soler, Russell, Schwarber...) like we used to be used to.
These kids would have us all going gaga.
Candelario's got 24 at bats and 8 hits with 2 of 'em going over the fence.
If the Cubs still had Valbuena playing 3rd, we'd be yelling KEEP HIM UP!
Supposedly the word is he's behind on his fielding skills, and I've read that he's trade bait.
But with poor Christian Villanueva out with the busted ankle, this Candelario kid is probably the next in line right now.
At third.
Behind Kris Bryant.
So... uh, keep working on the fielding skills there, Jeimer.

I read Jake Arrieta went 4 innings, struck out 5 and gave up a couple hits and walks.
On schedule for greatness.
And Kyle Hendricks - he went 4 on Sunday with 1 hit and 5 Ks.
Pretty sure he's #5, and I couldn't be happier about that.

Lastly, here's what we were doing in South Africa about a month ago.
McDonald's is sending some kids from around the world to take part in the Olympics opening ceremonies:

Super fun shoot, and the kids were amazing.
If you wouldn't mind hitting the "like" button, I'd really appreciate it. 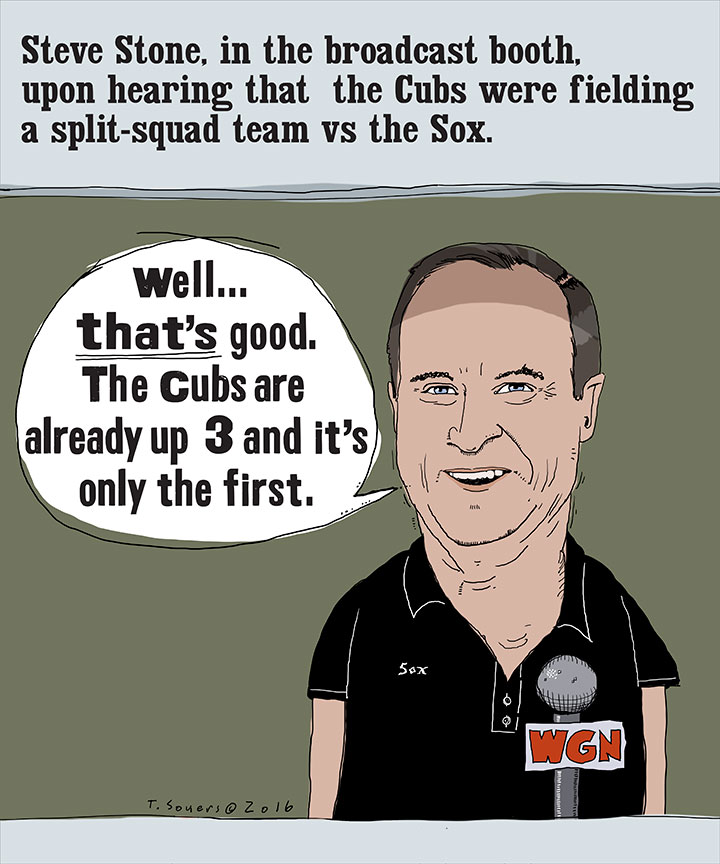 One thing about Steve Stone: he will never shy away from giving his opinion.
You watched the Cubs vs Sox game yesterday, right?
When it turned out to be a Sox broadcast I'll bet a $million bucks you tuned into the radio broadcast so you could hear the Cubs' broadcasters, too.
For whatever reason, I didn't.
And it was hilarious listening to Steve Stone.
Don't know who the other guy was - Hawk Harrelson was off or something.
But considering the broadcast came from the Sox, the coverage was remarkably even (except for things like the interview with Todd Frazier that went on for 6 hours).
In the first the Cubs jumped all over Sox starter and I believe there were 3 runs before an out was recorded.
And this isn't exact but the dialogue went something like:

OTHER GUY: ... and they're playing a split squad since the Cubs have a night game against the Dodgers.
STONE: WELL THAT'S GOOD. It's already 3 zip... you don't want to see the rest of those guys.

Now, that's just funny.
Imagine if Hawk was in there - I bet a fight would have broken out.
Anyway, the Cubs looked good.
Pitching, fielding, hitting... all good.
Jason Hammel was fantastic, and Fowler, Kawasaki, Heyward, Candelario, Rizzo... everybody was fantastic.
Just a perfect Saturday.
Cubs 9 Sox 2.
I missed the Dodger game but Wilson Contreras went 3 for 3.
Cubs 5 Dodgers 6.
And right now you have the power to move the 2016 Cubs Season one hour closer!
Go move your clocks up an hour - it's Daylights Savings Time.

Don't worry about Cubs wins and losses during Spring Training.

It's okay to laugh at yourself worrying about wins and losses during Spring Training, but I'm just saying... don't worry.
Arizona Phil says it much more elegantly, and from a much smarter POV at TCR.

I know.
Sometimes you can't help it.
All your self defense mechanisms kick in because you're a Cub Fan.
You get tunnel vision and as the game winds to an end you think about getting the win rather than Javier Baez and Jorge Soler hitting massive homers.
Seriously, the only actual losses that have occurred so far are Rex Brothers getting booted (his loss), Lester's fielding, and way more easy to angst about is the Kyle Schwarber tweaked knee.
Levine tweeted: "Kyle Schwarber may miss up to a week as precaution for tweaked knee"
Tweets about knee tweaks make me freak.
But the final score of Spring Training games should not be your concern.
Let it go.
Think about the individual performances and find your victory in 2 good innings from John Lackey today, because at 2:05 he'll make his Spring debut vs the Reds at Sloan.
A win would sure be nice.
DOH!