Can you imagine how many teams Joe Maddon can field with these Cubs?

I went ahead and put Arismendy Alcantara and Shane Victorino in the illustration, but even without those guys the different teams Joe Maddon can field is astounding.
And, sure I could have made a similar illustration for any past team, but with the 2016 Cubs there doesn't seem to be a single grouping that wouldn't be kind of amazing.
One's eyes roll back into one's head.
Sure we're worried about Anthony Rizzo - a long term injury there would be a catastrophe.
But everything else is just so deep, especially when you consider David Ross also pitches.

I don't mean to lessen his value because I'm sure that like me, you'll always hold him in high Cubs regard, but think back to Mark DeRosa.
Back then, I thought wouldn't it be awesome if the team was so good that DeRo, who could play anywhere, was the back-up guy rather than the starter (I wasn't even really aware of Zobrist then, but like that).
I wonder how he'd fare on this team as his '07 or '08 self.

Anyway, tons of choices for Joe.
And lastly, poor 3rd baseman Christian Villanueva. Busted his fibula fielding a grounder and may have to have surgery.

Lastly lastly, I'm on a shoot in Los Angeles, and the hotel has it's share of people who are way cooler than you or me.
They look young and rich and I see them hanging by the pool as I walk by on the way to work.
These kinds of people are at every hotel out here, but there's something different about them this trip.
So far I've seen two of them wearing Cubs hats.
Brand new.
Bright blue.
Cubs hats.
Usually the only Cubs hat at a place like this is worn by me at 5:30 AM when getting the free coffee they have in the lobby before I shower.

The times they are a-changin'.

Dexter Fowler almost got caught off base. 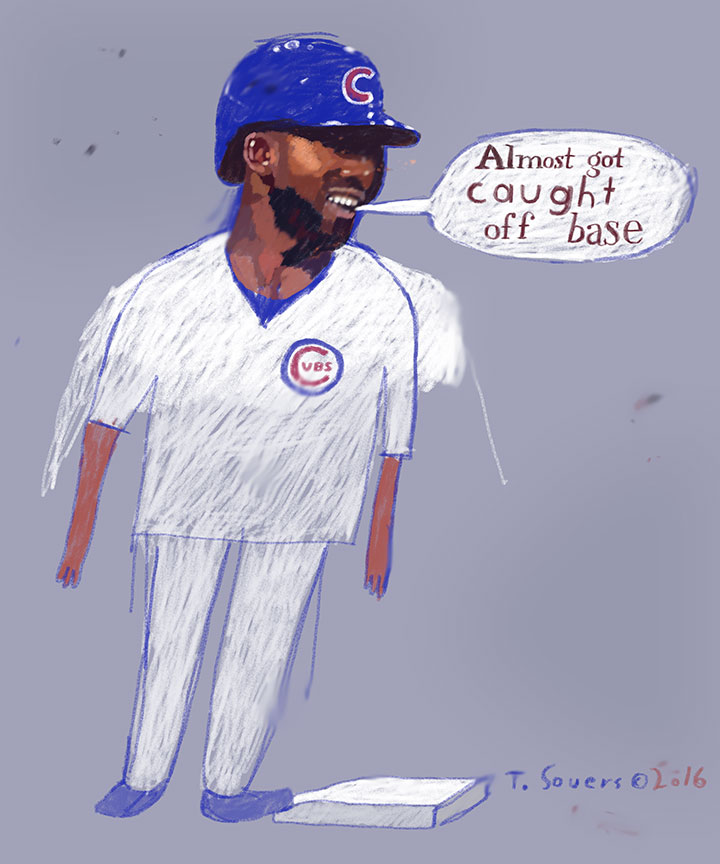 If you're a major league ballplayer. Right now. This year. And you had a chance to be on the Cubs. How in the hell would you not take it?
I'm way too busy right now and I don't know the details and I won't til I get some more time, but I got a number of texts saying the Cubs signed Dexter Fowler..sounded like he was a minute from becoming an Oriole... then some kind of contract snafu and POOF! Theo swooped in and signed him.
Poor Chris Coghlan went to the A's for a pitcher.
I truly feel bad for him, but I also think his career got revived in Chicago and he'll do well in Oakland.
But Chicago?
I think our favorite team got deeper in a better way.
Plus, I grew to like Mr. Fowler especially since he got so much better the 2nd half of last year.
Okay that's all I got.
Kinda cool.
Go Cubs. 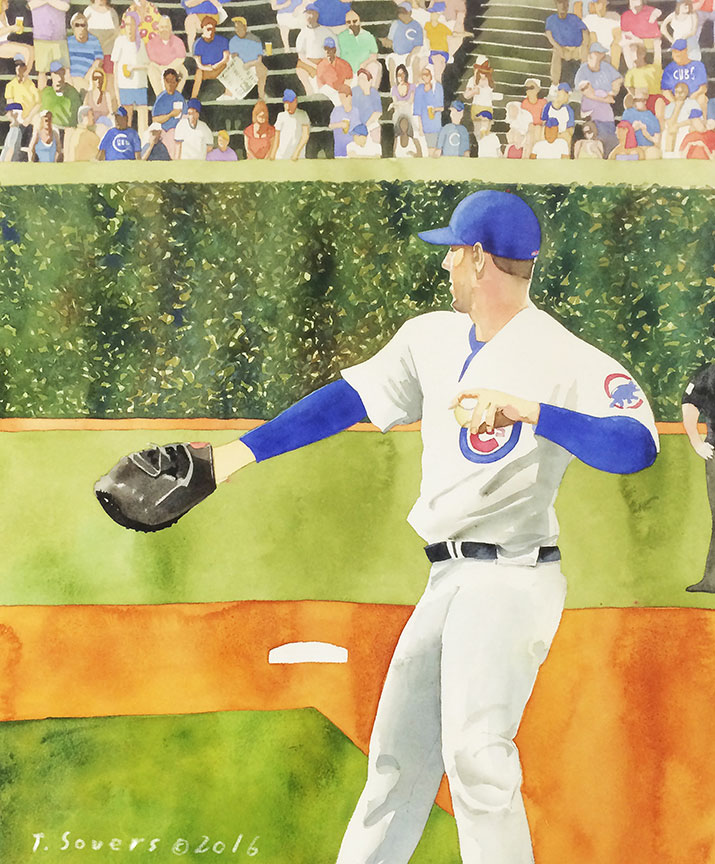 This is the one I was talking about.
Weeks on this watercolor, and really I'll spend more time on it, too.

So you know what I did?
Made a random crank call to the North Pole.
Guy answers the phone and before I could say anything he he just blurted out, "I PREDICT THE CUBS ARE GOING TO WIN THE WORLD SERIES."
I just said thanks and hung up, but...weird, huh?

Everybody's got Spring Fever, and I mean EVERYbody.
People are talking about this in the elevator, on the el, and while it's something new to talk about, I promise it's also historically new.
1 in 4 are the odds, and I apparently helped when I got my dad a $100 bet that the Cubs would win it all.
Go here, you can print out the art and do the same.

Yada yada, I'm just so glad to turn on the tv news and see players and Joe Maddon talk.
Baseball is happening and it couldn't happen soon enough.

Single game tix on Friday.
Who's going to enter The Twilight Online Cubs Zone?
I'm gonna try if work allows.
It's frustrating and whatever, but if you get past the waiting room... sweet victory.

It's the most wonderful tiiiiiiiime of the year!
And, it's a leap year.
And who knows how high the Cubs can leap this year!?
Slammed.
Gotta run.
HAPPY PITCHERS AND CATCHERS REPORT DAY!
Go Cubs. 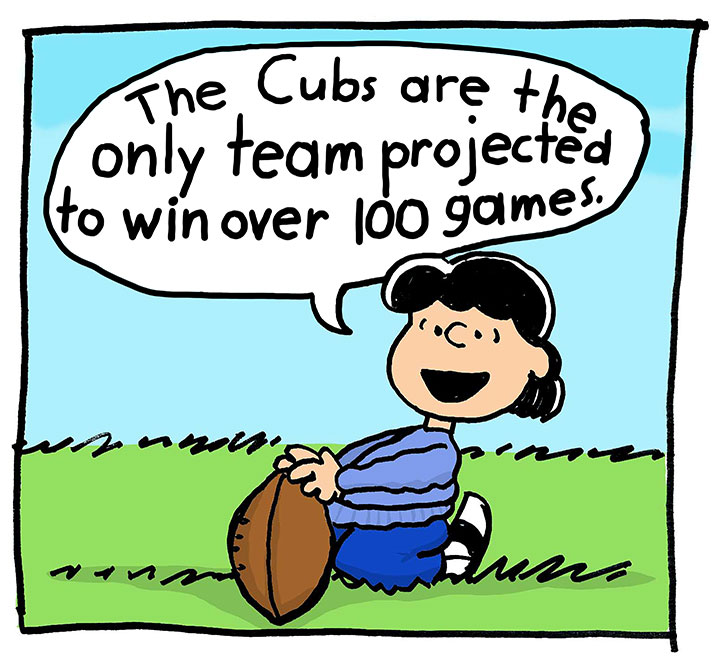 Here's the article from USA TODAY.
And sure:
1) Writer Gabe Lacques is trying to sell papers. (And look how I'm talking about this now!)
2) It's February and if you can't be optimistic in February, then when can you be?
3) Including the playoffs, the Cubs actually won over a hundred games last year.

But... I can't bring myself to just... 101 wins?
Are you out of your mind?
I don't know, maybe that's just too specific.
Good God, my ears are ringing and all my nerve endings are blowing up at the same time.

I'm all in for "playoffs".
You've even heard me say "World Series" before.
"Yeah, the Cubs can take the Cardinals" - I think that can happen.

But to just go around saying "Cubs" and "101 wins" in the same sentence seems kinda nuts.
There's been a national awakening to what Theo and Jed have put together here in Chicago, and while I will always welcome everyone to the newly found fun, I wish the really loud expectations would calm down a little.

I'm not kidding, I feel.. symptoms.
Shortness of breath.
Accelerated heartbeat.
Feel my pulse.
That's not normal, is it?
I'M FREAKING OUT THAT THE CUBS MIGHT BE AS GOOD AS PEOPLE THINK WHILE AT THE SAME TIME I'VE BEEN A CUB FAN FOR LIKE, EVER.

The only thing that can fix this is baseball.
Games.
Please, PLEASE hurry.

I apologize for flipping and flopping and if some days I feel more or less confident than others.
I also apologize to Charles Schulz and Peanuts and if you or your people find my use of Lucy offensive let me know and I'll take it down.

What does a Cubs invitation to Spring Training look like? 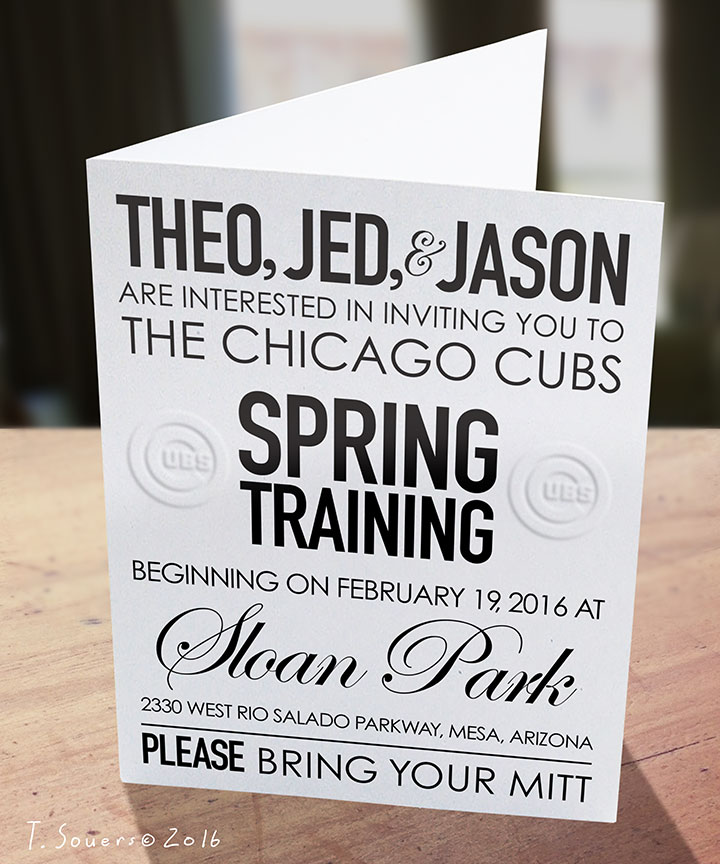 Ahhhh.
It's probably just a phone call, right?
Or maybe you've been working out all winter, and now you're eating pancakes at your parents house and get a text from your agent.
But think if the Cubs actually sent out an invitation to come to Spring Training.
What a keepsake that would be.
I mean, for some this might be the closest you get to the Bigs.
You say to your grandkids yeah, yeah I was invited to play for the Cubs.
That would be a big deal since it's in the future and the Cubs have been the standard of excellence for years and years.
And your grandkids would say what? I don't believe you.
So you'd trudge on up to the attic and open some chest and pull this invitation out.
The grandkids would ooooh at the cover, and then open it and see Hall of Famers Theo Epstein, Jed Hoyer and Jason McLeod signed it.
Couple weeks ago the Cubs announced the Non Roster Invitees.
Albert Almora is the big name there - maybe the Most Likely to get a Cup of Coffee this year.
Not all these guys are invited, but here's Arizona Phil's Spring Training Depth Chart from The Cub Reporter.

Man, just 4 days til Pitchers and Catchers...
Sick of hearing that countdown?
Didn't think so.

What else...
I got an email from our old buddy Larry O'Brien (Ted Lilly's agent).
He now represents, among others, the guy we got for Starlin Castro, Adam Warren.
The former Yankee reliever/part time starter who we all have giant hopes for as we watch how Maddon/Bosio decide to construct the staff.
So, maybe some scoopage from Larry's team and a post to come.
Also, I've been working for WEEKS on a large Anthony Rizzo painting.
It includes people in the bleachers - lots of them - and I'm such a dopey watercolorist that I got all detailed with that part.
When you're really really good, you can just paint a simple impression of complex things and it looks awesome.
But this looks pretty good, too.