Cub Fans are gonna have to learn a new language this summer. Like how to say "World Series". 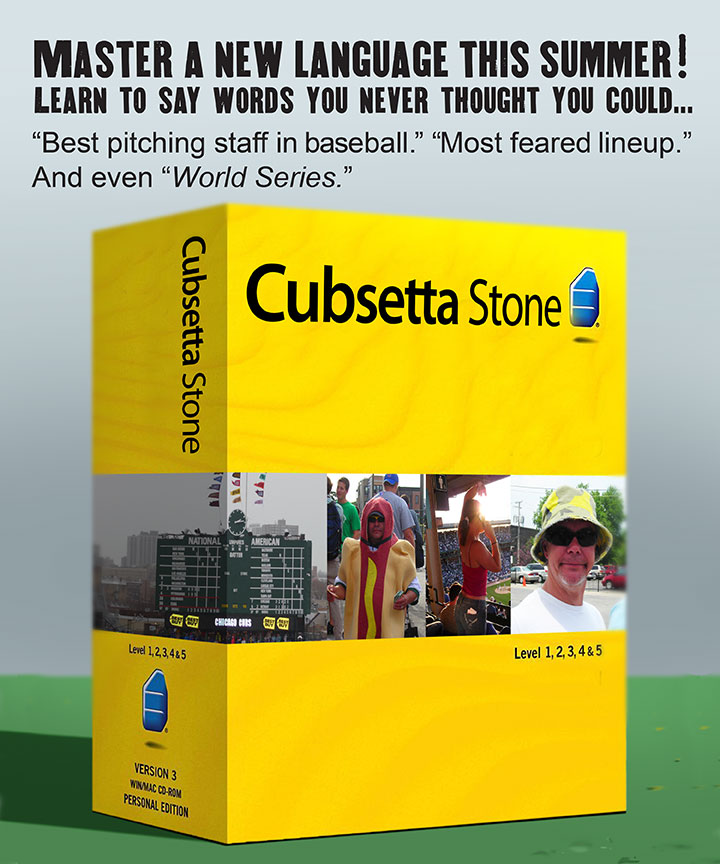 5 days ago, USA Today ranked the Cubs as the team with the best starting pitching staff in baseball.
Ummm... what language is that?
Because I've never seen those words before.
For sure I've never said anything like that out loud.
Best minor league system, biggest bangers, smartest baseball brains, and of course the best bet to win the World Series.
I gotta learn to speak Cubs all over again.
This foreign language thing actually started when Theo Epstein first took over as President Cub and used words like "asset" instead of "player", or "control" as a way to describe years in a contract rather than something a pitcher has.

I have a war that never ends going on in my head.
On one side is Luck and Superstition, and the other is Facts and Stats.
Facts and Stats have NEVER won before.
But if we were looking at an old black and white WWII movie right now there'd be a spinning newspaper flying at the screen with a bold headline that reads: "FACTS AND STATS ARE WINNING THE WAR!"

People come up to me and ask about the Cubs and I toss off "World Series" without fear - almost more like I'm talking about the weather.

Here's how big a deal that is with me.
Years ago our house got done being remodeled and I suddenly had a bathroom with a big shower surrounded by tile and glass.
The contractor or somebody said to get a squeegee for the glass, which I did.
And the next morning after my shower I squeegeed all the glass.
Now I admit I don't remember what game it was, but later that day the Cubs won big and my first thought was, "It must be the squeegee."
Every day of my life since that day starts with me squeegeeing the shower.
Sometimes in my head I go, "Today I won't do it and just see if something bad happens."
But I never have.
I just got back from a big shoot and made EVERYBODY walk on the same side of any poles on the sidewalk because splitting poles is bad luck.
Maybe it's because I was born on Friday the 13th.
I'm not like Rain Man, but I am a freak and I can't help it.
For me to be able to say out loud "Yeah, the Cubs just might win the World Series this year" is as foreign and wrong as this old commercial:


But I'm doing it.
Hell man, it's just about Spring.
Have you ever been so optimistic?

2016 is the most looked-forward-to of any Cubs' season I can remember. 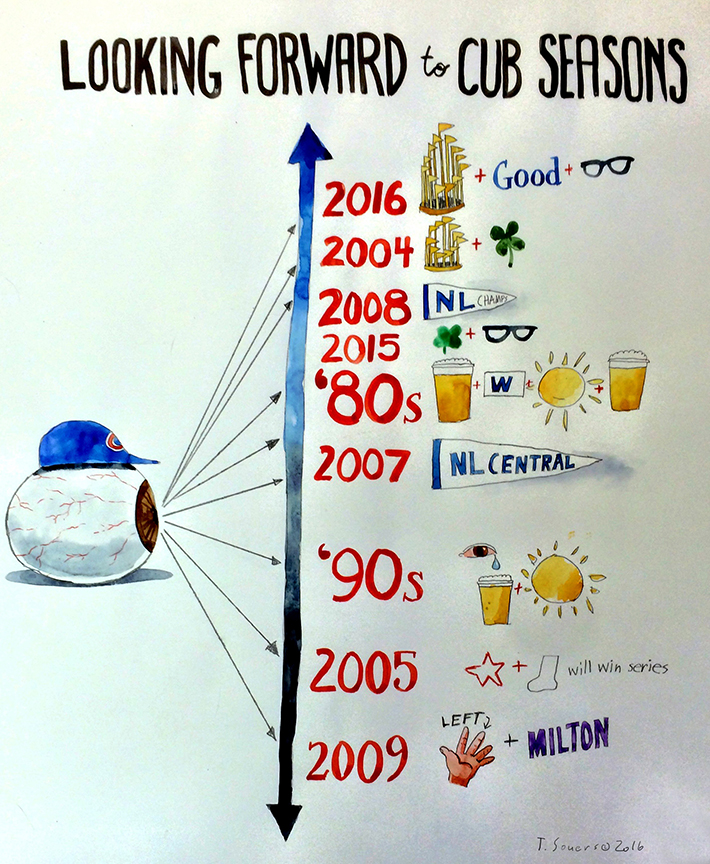 This isn't about looking back on a Cubs season and judging it that way.
LIke in '96 when the Cubs were 74-72 on September 13th but then lost 14 out of 16 including sweeps by the Cards and Reds and the summer was completely ruined.
You wouldn't know what a horrible year that was until it turned horrible.
You have to discipline your thinking to what you were thinking about the upcoming season before it happened.
How much were you looking forward to it.

You could call it "expectations", but that's giving this thought too much credit.
Because for the vast majority of our Cub Fan lives, we already knew the Cubs were going to be awful.
So the looking-forward-to part might not necessarily be all about wins and losses.

Like, for the entire '80s?
Those were fun, innocent years.
I looked forward to beer, a couple wins, some sun, and more beer.
If they won... we were so lucky!
When the Cubs actually turned out to be good in '84 and '89... I didn't know that would happen.
Al Gore had yet to invent the internet, and who knew what Dallas Green was doing in the winter.
Yes there was Ryno and Grace and Sutcliffe and Dunston and Andre - some of your all-time fav Cubs.
But there also seemed to be lotsa luck.
That whole '80s deal seemed to be kind of a Pete Rose line drive that happened to bounce off Lee Smith's back and turn into a game-ending double play.
And more beer.

The '90s were OK.
But honestly there wasn't much to look forward except your basic "I can't wait for baseball" because baseball.

On the other hand, I was absolutely looking forward to the Cubs going to the Series in '04.
They'd come so close in '03.
In '04 they had the same basic group of guys - I was so positive about it I couldn't even talk about it or I'd jinx it away from them.

2008 we were all looking forward to an awesome season, for sure they'd win the division and then maybe...

2015 was... the wild card year.
Totally something to look foward to and we've talked about it to death.
We knew some of the kids were coming and if they were unlucky then they'd Corey Patterson, you know?
But they didn't, did they?
Nobody knew that in January, though - I certainly didn't think they'd do as well as they did.

Conversely at the '09 Cubs Convention when we all listened to Lou talk about needing to be more left handed, so lets pick up an already documented crazy person lefty bat in Milton Bradley.
And dump cool right handed guys like DeRo.
I wasn't looking forward to that year.
Not at all.
Jim Hendry ruined it long before the season started.

I didn't count any of the recent rebuilding/throw-away years in the drawing.
(Duh, nobody looked forward to that.)

And I cheated on 2005 because nobody, especially me, could know that that year would end up being the pinnacle of terrible with the White Sox vs Astros in the World Series.
Didn't I get athsma and have hernia surgery that year too?

But now, we have 2016.
I believe there has never been a more looked-forward-to season.
For me, I'll include any sport, too.
The end of the '84 Bears season with the loss to the Niners and Singletary doing the "we'll be back" thing - that had me really looking forward to '85.
Probably that was the former all time champ in the looking-forward-to seasons.
Not now though.
This Cubs team is loaded like never before in my life.
I have never, ever looked forward to any season as much as I do this one.

Like there's an apple pie in the oven.
Smell that?
I CAN'T WAIT!!!

Cam Newton (the other Newton), invents his own gravity, crushes Cardinals. 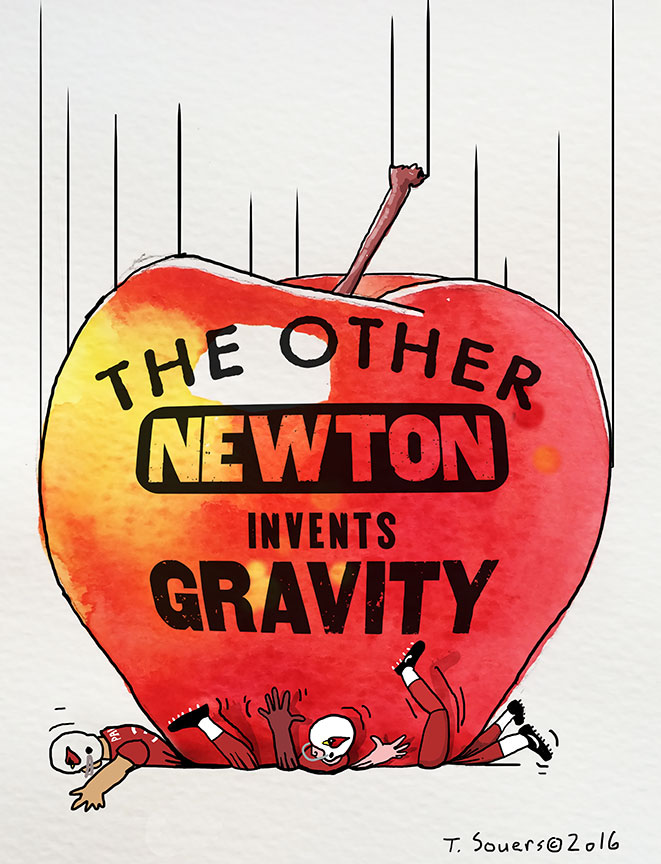 After that white knuckle Broncos vs Pats game, the absolute destruction of the Arizona Cardinals by the Carolina Panthers was almost hard to watch.
The Panthers don't look like a team merely getting hot at the right time, they look the best team from from the future.
Like what Star Wars looked like in 1977.
A new thing.
And a bunch of that comes from Cam Newton.
In baseball where they say, "That guy is a 5 tool player."
How many tools does Newton have?
There probably isn't enough digital ink to write it out.
So I just simplified it to gravity.
That guy has the weight to crush the hopes and dreams of any defense.

How impressed were you with the linebackers on the Broncos?
DeMarcus Ware and Von Miller beat the crap out of the Pats.
Don't think I've ever seen Brady get smacked around like that - just brutal.
It also seemed like the refs were sort of... not calling things they normally would with the late QB hits and stuff.
Anyway, those two Bronco LBs make me think the actual football part of the Super Bowl might be pretty interesting, but I fully expect the Panthers to bring the apple down.

Ummm... enough with the science stuff.
I'm not even sure the drawing makes sense - still completely jet-lagged.

We saw The Revenant on Sat nite, and it's loud, pure wild action at the start.
I was SO EXCITED at the start.
Then suddenly I woke up and he was fighting a bear.
No idea how much I missed, but jet lag is a real, physical thing.

This gif pretty much tells the story so I don't really need to write much.

I try to keep my Bears' Anger in check, but it bleeds out all the time. 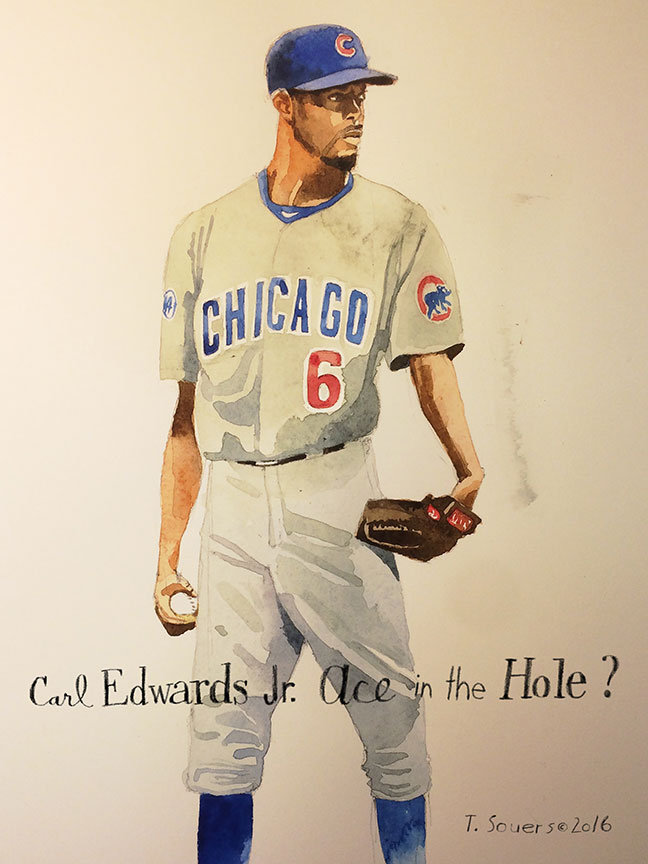 We saw Carl Edwards Jr. for about 5 minutes last season.
Started off with one scoreless inning of relief vs the Cards.
I mean, you never know, but it sure would be cool if he became a factor next season.
Not really expecting it, but expectations have changed with our fav team.
Anyway, I've been away - one of the reasons I haven't been posting much.
We've been out of the country working the last couple weeks, and later today we'll begin the trip back to Chicago.
So please forgive me, it's just busy.
In the meantime, I believe now it's less than a month til pitchers&catchersreport.
"Wooo!" said another Ronnie. 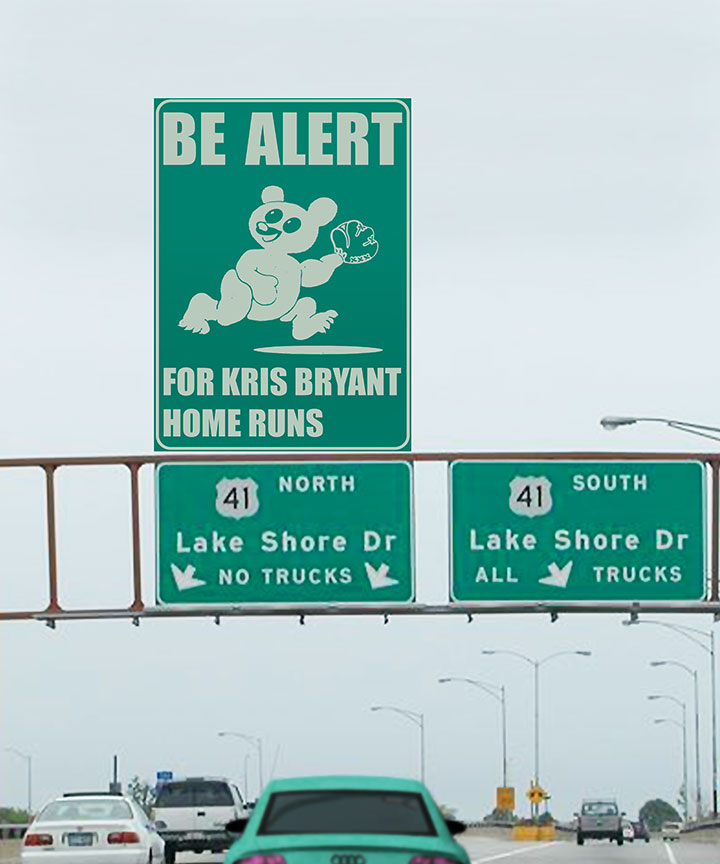 Did you read they're gonna make Wrigley Field safer with the net behind home plate being "extended to the inside edge of each dugout, high enough to protect seats that are 70 feet away from the action."
Of course I don't think that's going far enough.
Think of all the power in that new Cubs' lineup.
What about people innocently walking down Kenmore?
Shouldn't they be reminded that Kris Bryant might be batting at that very moment?
Or people sunning at Montrose Beach?
They should have all home games on loudspeakers so you'll know.
"Honey, can you put some sunblock on my back, please. And Anthony Rizzo is up so look west."
Or driving on Lake Shore.
There should be signs on that road, don't you think?

Okay, enough joking.
I'm glad they're doing that with the netting.
I never want to see anybody getting creamed with a ball to the temple.
And on an even more serious note, they're going to "install metal detectors at each entrance."
I'm guessing here, but "install" to me means a thing you walk through and not a security guard with one of those wands.
Maybe it'll be more like an airport?
Take stuff out of your pockets first?
I don't know, but I'd plan on getting to the park earlier - that's going to add tons of time getting in.
Not to mention... there's got to be a money angle, right? A couple pop up stores so you can shop or grab a hot dog while waiting in line?
They're also proposing that Clark and Addison be shut down during games as a terrorist deterrent in reaction to the attacks in Paris.
That's kind of surreal, but I imagine stuff like that will be happening everywhere.
Times have changed, man.

Gotta run.
Go Cubs.
It's getting closer every day.