I was just... looking around to see if there's any new Cubs news.
I looked over at the "important dates" on the MLB website, and there's a list of when the BBWAA (which is Baseball Writers' Association of America) will announce the awards for Rookie of the Year, Manager of the Year, the Cy Young Award and MVP.
But I thought hey, Bryant already won that, right?
Oh yeah, that was the players voting for that one.
So I went over to the BBWAA website.
Good LORD!
Design-wise, it's hideous!
Looks so Bush League, right?
Look at that stupid logo!
And then I saw it.
"EST 1908".
How come I still have that reaction to the Cubs haven't won the World Series since 1908 thing?
So what if it's been one hundred and seven years - the team is so good now!
Ahhhh... don't lie - you've got it too.

But how about these awards?
Bryant is a shoo in.
Maddon is... well that one doesn't matter.
Joe's the guy who's gonna get the Cubs over the hump and if he doesn't win Manager of the Year this year, he's going to be Manager of the Slightly Over A Century very soon.
And Jake Arrieta deserves the Cy Young, period.

It's pretty crazy that 3 Cubs are in this discussion, though.
Isn't it?
Remember '08?
Not that one - the one with the "20" in front of it.
The All-Star team that year had 8 Cubs - that was crazy.
In '09 there was one: Ted Lilly.
That was back to normal.
But now, I expect that multiple Cubs will be littering the All-Star teams for years to come.
That ain't crazy.
Just a fact.

PS: Sorry to step outside sports, but I'm sickened by what happened in Paris. 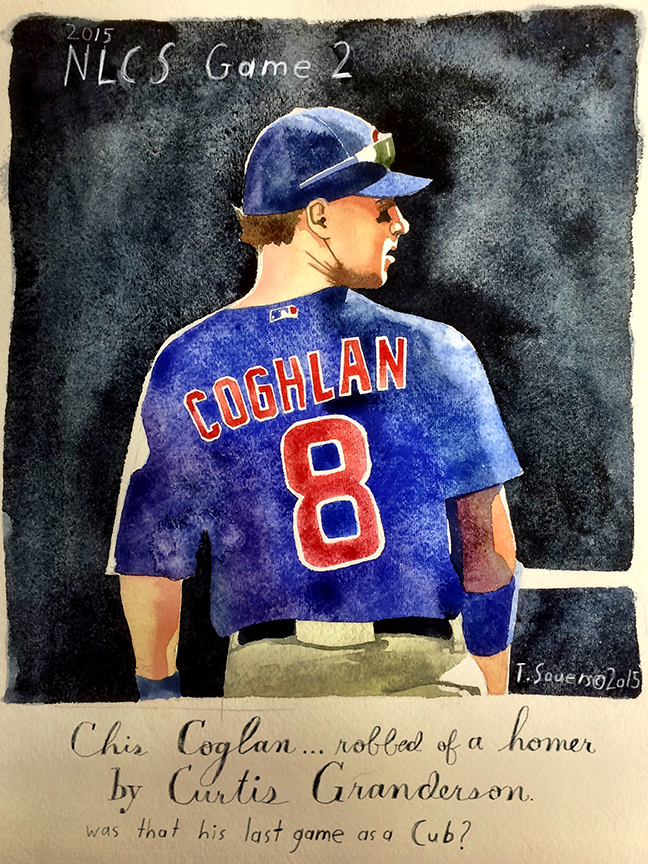 NLCS game 2.
The Mets score 3 in the first off Jake Arrieta, and the mood is somber for us because he'd been untouchable for like, ever.
Chris Coghlan is starting in left because he'd smacked a homer off Thor-Met Noah Syndergaard earlier in the year, and now he comes up to bat against him again in the top of the 2nd.
Good swing big noise ball heading out of the park and into the Met bullpen when Curtis Granderson leaps up above the wall and... keeps it in the park for an out.
Coghlan would get 3 more at bats but just popped out, and grounded out twice.
The last one was the last out of the game.
He wouldn't play again in 2015.

Yuck, man.
I thought Coghlan could be that one player - the not so well-known guy who does something memorable and amazing in the playoffs, but that guy turned out to be Daniel Murphy.

And now we're off and running in Winter.
The General Manager's Meetings are happening in Boca Raton as I write.
The Cubs are expected to... do big stuff this winter.
"Creative" or whatever.
Including maybe upgrade left field by signing free agent Alex Gordon.

Whoever the Cubs retain or acquire to be 2016 bench players... I figure those guys would have been Big Important Cub Starters in years past.
Is Coghlan one of those guys?
I don't imagine so, but who knows.

We're all thinking about pitching anyway.
I just happened to paint Coghlan.

Hey, it's been really really nutty/busy and I've been traveling some.
I think I won't be as punctual as I have in the past as this off-season goes along.
But I'm not going anywhere.

And it's going to for months.
I mean, I'm pretty sure Theo's Super Sabersonic Scouting Search Engine is going full steam.
And it'll be exciting when the Cubs acquire whoever they're gonna acquire.
But for you and me it's mostly going to be excruciatingly slow as we wait and wait for the pro team from the North Side of Chicago to show themselves again.
You know that team - the one picked to win the World Series next year.

If you'd like, you can come by here once in awhile and wait with me.

I'm just being mean here.
On one hand, when Dusty Baker first came to Chicago I was amazed at how (for the first time I could ever remember) good players around the league were saying hey, maybe being a Cub would be okay.
On the other is the Prior Watch, a Sports Illustrated cover, and Kerry Wood.

A tip of the cap to the Kansas City Royals. (cartoon) 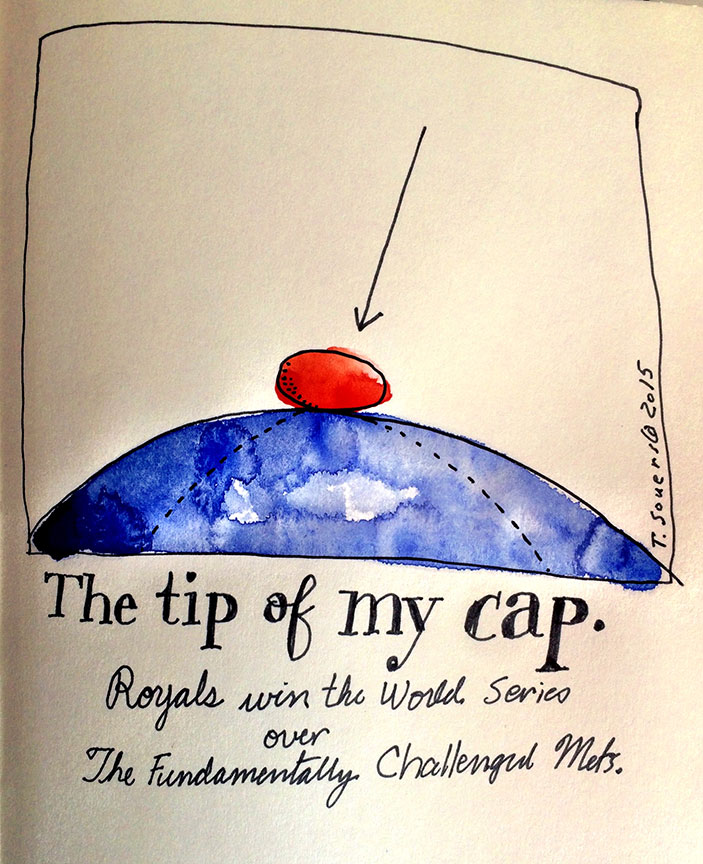 That's all.
Just the very tip.
Actually, the Kansas City Royals were the hot guys at the end.
Their bullpen was better, their hitters were better, their fundamentals were better.
Last night, on what I figured was the Most Important Play, the Mets' Lucas Duda left the "funda" part off the front of "fundamental" and put the "mistake" part at the back.
It's the top of the 9th Mets up 2 zip and Matt Harvey has just won the argument with Terry Collins to stay in the game.
He walks Lorenzo Cain and Eric Hosmer doubles him in.
Bye Harvey, hello Familia.
Mike Moustakas fielder's choices Hosmer to third.
Perez hits one to SS Wilmer Flores, but David Wright cuts in front, looks Hosmer back to third and throws to Lucas Duda at first.
When he does that, Hosmer takes off for home and Duda's throw goes up over catcher Travis d'Arnaud's head on the wrong side of the bag.
Had Duda made the throw, Hosmer is out - it's a double play and the World Series continues on back to Kansas City.
Instead, Joe Buck and co. can't say the words "excellent baserunning" enough.
When they show the replay from behind the catcher looking down the first base line, and it was a wide shot, Hosmer isn't even in the picture as the ball sails away.
Just a terrible play by Duda and...
Now it's game tied and yada yada onto the top of the 12th when the Royals put up 5 runs against Addison Reed.

Then the scene with the away team doing their celebration on the field while the Mets get to go look in the mirror and think about fundamentals.

And you and I can finally get back to the Cubs.
The other day catcher Wilson Contreras went 3 for 4 for the Mesa Solar Sox - 2 doubles and a dinger - leading BASEBALL PROSPECTUS writer Wilson Karaman to say (his story also included Cardinal prospect Aledmys Diaz), "We’re looking at two helium balloons if the performance to date keeps up throughout their respective Arizona campaigns."
That's kind of exciting! 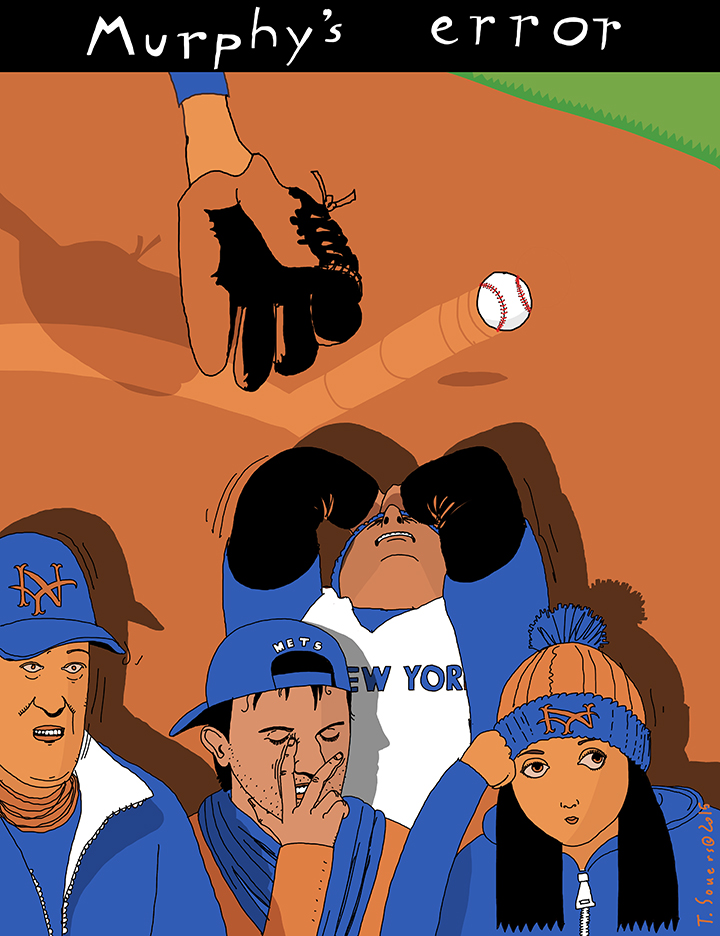 Man oh man.
Overall, this 2015 World Series has been about some pretty great plays.
Then last night... Daniel Murphy's own private Halloween or something.
There's still a game left, but you wouldn't think it if you looked at the papers in NY.
Joel Sherman's headline reads "Daniel Murphy's rise and fall shows the cruelty of October."

This kind of stuff that happens under baseball's biggest spotlight can really... ruin.
You get lumped in with other players who were normal one minute, and then next a member of the eternally famous-for-gagging.

I've been trying my best to forget about the superstition aura that tornadoes around the Cubs.
But.
To gloat over this Murphy thing... I don't really want to touch it.
It's like when my kids were little we'd go to the zoo - we were right down close to the Lincoln Park one.
My wife would go, "Honey, come over here and pet the goats."
And I'd say, "ARE YOU OUT OF YOUR MIND?"

Okay so enough about that, except...
All the announcers can talk about is what free swingers the Royals are.
(Every time they show Dale Sveum I imagine him doing the subtle Larry Czonka flip-off at Theo.)
And then Ben Zobrist and Lorenzo Cain take walks to set up the above play.
Everybody watching was thinking how does Terry Collins leave Tyler Clippard in after the first walk?
Wow.
All the air left New York.

Because it was Halloween, earlier we watched the first "Nightmare on Elm Street".
It's actually a really good, smart movie (for that kind of thing).
Most of it spent watching somebody trying to wake up from the nightmare.
I figure that's exactly how Murphy feels.
The only way to get out of his nightmare is to win the Series.
That way, he didn't really get slashed by those freaky razor gloves and last night just becomes something to laugh about.
But I don't think Freddy Krueger ever loses, does he?