Hey man, your guess is as good as mine.
The "Drooling Cub Fan" is a pretty accurate self portrait right now.
Maybe you read Dave Dombrowski and the Boston Red Sox are the big favs to land David Price.
That actually sounds right, and I bet they'd outbid anyone.
It's HUGE stakes and HUGE money and probably our favorite team isn't gonna end up with the HUGEST prize(s), but still way interesting and nerve wracking.
Anyway, there's all kinds of much smarter places to read up on this stuff, but I hope you got a laugh.
COME ON THEO - GET CREATIVE! 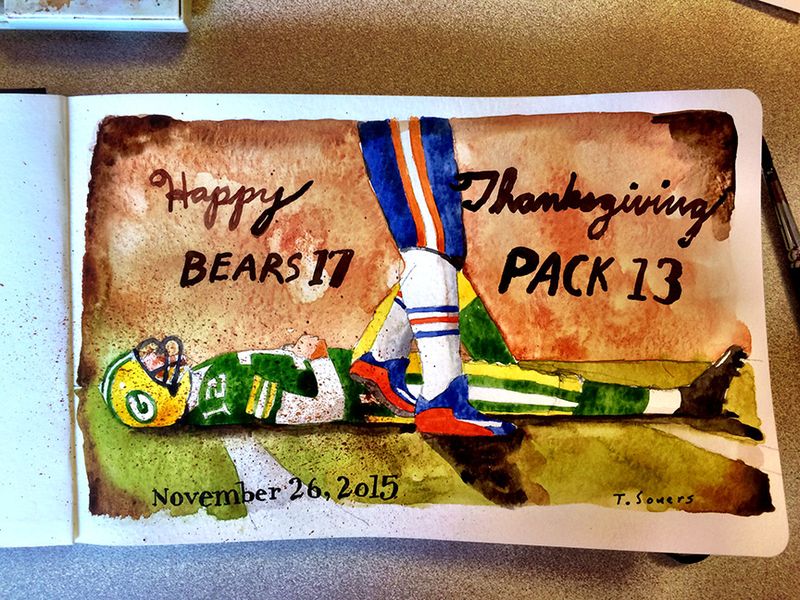 Howdy and Happy Thanksgiving.
I have a houseful of guests and work never ends so..sorry this is late but um... when's the last time you were in this good a mood because of the Bears?
For about a week, I envisioned myself flat on my back, stuffed with a plate-full of Thanksgiving and something pillow-like under my head that just baaarely got my line of site up over my stomach so I could focus on the television screen.
And not only did that actually happen, but the Bears did something spectacularly unusual... defeat the Packers on their own beloved Lambeau Field on Thanksgiving Day.
Oh wait.
That's not just spectacularly unusual... IT NEVER HAPPENED BEFORE.
Since the Dawn Of Football, the Bears have played the Pack almost 200 times. But they've never met on Thanksgiving.
(Certainly not on a day a famous former Packer QB (Favre) gets his number retired and bro-hugs like 30 guys in a row, including Bart Starr.)

I sure hope this turns into a "thing" because a 17-13 victory over the Packers was ohhhhh, about a billion times tastier than pumpkin pie (honey, if you're reading this you know I LOVE your pumpkin pie - I only said that because it's such a strong statement).
To see Jay Cutler in control and Aaron Rodgers appear to have nothin' was the opposite of every other time they've met.
Yay Jay!
And the D.
I hardly know any of them.
But that Callahan guy was awesome.
So was Porter, Prosinski, Houston, McClellin... I'm gonna remember these guys because who knows - they just might be the real guys.

Happy Thanksgiving?
How's about Impossible Thanksgiving.
Or impossible 2015 with the Bears ruining the Packers' season and the Cubs doing the same to the Cards.

I'd sing a Christmas carol out loud in front of anybody right now, if it was a little closer to the actual day.
And if you haven't seen this locker room clip, click here.
That's exactly how I feel.

Because of the clogged arteries I experienced in my Bears Heart last year, I found I also lacked enthusiasm for the game overall.
And I was only vaguely aware of the odd way Broncos' GM and all around Denver God John Elway parted ways with his head coach John Fox.
Then I read this Dan Wiederer article over at the Trib, and yeah, that sounds about right, doesn't it?
Fox does really great during the regular season.
But also the perception that getting Peyton Manning means automatic victories for whoever is coaching.
And the disappointing playoff losses.
Let us mutually part, says Elway.
I don't care if you went 46-18 in 4 years here, you didn't take us to the promised land.

This is actually a great story for us.
Apparently Fox has avoided the Elway subject all week long.
And if he can just get a couple more miracle catches from Zach Miller, if Jeremy Langford keeps it up with maybe a little boost from Matt Forte returning, if Jay Cutler can keep not being himself, then what a day today could be for us.
And John Fox maybe gets to feel like he knocked a couple chiclets out of Elway's giant smile.

What you doing at noon?

Here's what I did yesterday: worked from home (yeah, it's that busy).
And then I heard my neighbor Garry the Cop outside with his newly restored snow blower.
I got guilted into going out.
First shoveled the back, and met Garry out in the alley where he'd cleared the area behind his garage.
With the snow blower.
I go, "Gimme that thing!"
So, snow blowers are a gift from God, or I mean... a Canadian guy named Arthur Sicard.
It's still not fun, but the idea of not having to shovel is heavenly.
Anyway, I'm way over at the other side of my garage working the thing, but it keeps cutting out.
I notice Garry is now talking with another neighbor from the other side of the alley.
There are alot of Eastern Europeans in our hood, and I'm pretty sure she's from Poland, and while she's talking she's working her snow shovel.
I'm still over where I am, blowing some snow, having the engine cut out, and restarting.
FINALLY, I go look at the hole the snow is blowing out of, and it's filled with a giant wet snow plug.
Who knew?
So I'm clearing that out as Garry walks over.
"I was telling her to not shovel, that you'd be over in a minute with the blower. But she said: why you have blower out today? The snow. It's too wet."
Which is when the motor started going out on me, way over there by my garage.
Garry continues, "So I'm like, don't worry ma'am, we've got it all under control. Just give my buddy a minute and... then you can't keep the thing going. And then suddenly she was already done shoveling."

I love being an alpha male.
A man.

I say, "Hey where's the button to turn this thing off?"
Garry points to the big key right in the middle of the blower.
I say, "Yeah well, go Bears." 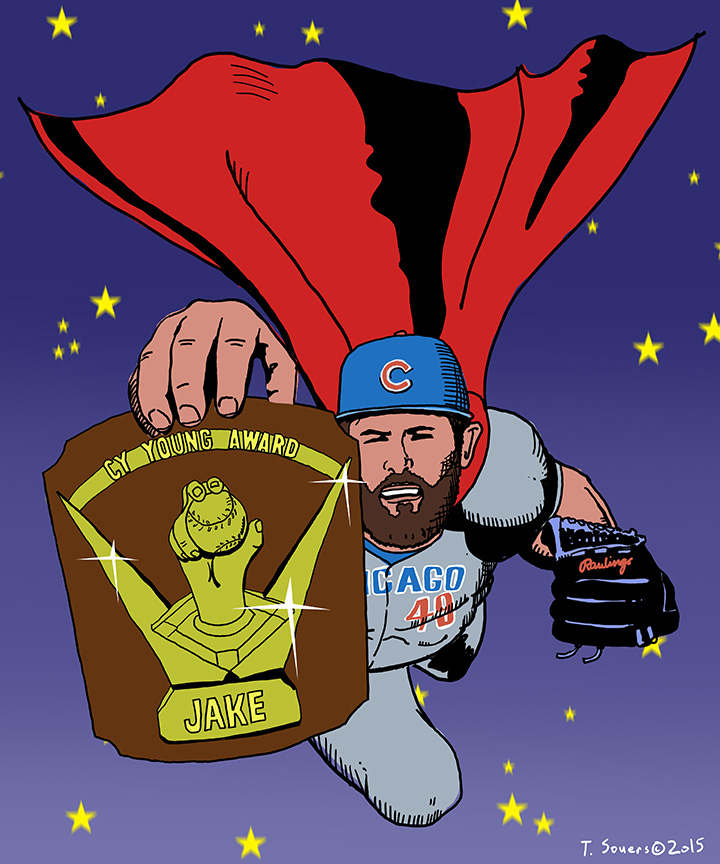 Well, sorry.
My blog supplier had some kinda hiccup earlier and I couldn't post.
But that's actually okay.
Jake Arrieta getting the Cy Young... I'll be jabbering about that for days anyway.
HOW AMAZING IS THIS?
Three giant awards for our favorite team, and they JUST got out of the gate about a half year ago.
That's like, about 4 minutes in Cub Years.

Arrieta and the Cy Young, Joe Maddon and the Manager of the Year, and Kris Bryant with the Rookie of the Year.
I'm in heaven.
So are you.
Anyway, I guess now it's time to just hunker down and wait for David Price to become a Cub.

What will Joe Maddon win next year? (cartoon) 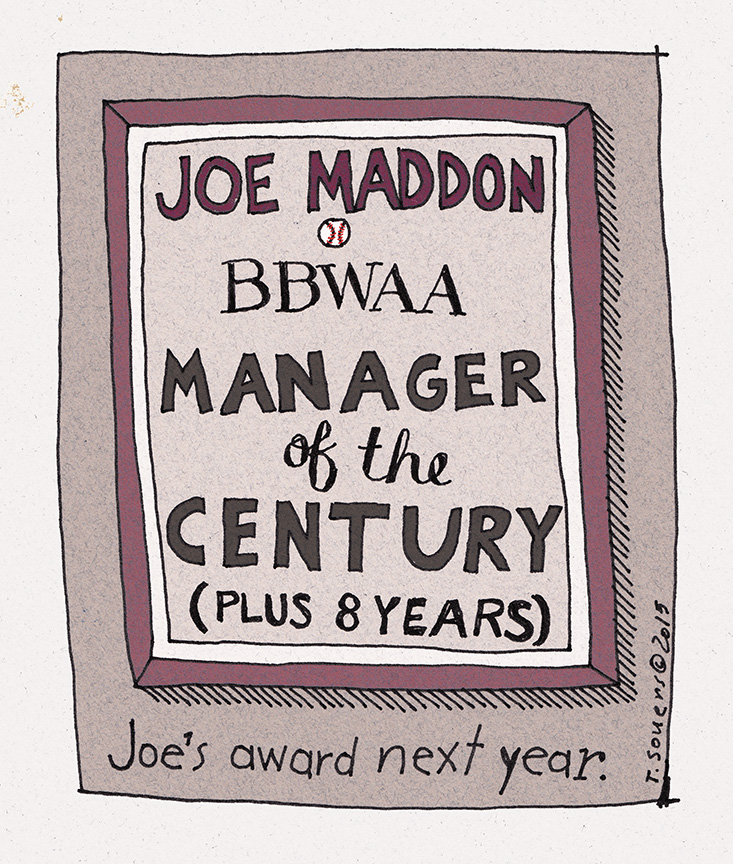 Not being jinxy.
(I'm a good judge of those kinds of things.)
I'm just saying, if Joe Maddon takes the Cubs to the promised land, he won't just win Manager of the Year.
He'll be Manager of the Century plus 8 Years.
He'll become a Chicago (actually probably a National) God.
A worthy Chicago Icon bigger than we ever had before.
When that "promised land" thing finally happens, it'll be untouchable.
No one in the future has any hope of winning it all for a franchise that hasn't won it all for over a hundred years.
If they built a Mount Rushmore for Chicago Sports, Joe's head would be the biggest.

And with Kris Bryant winning the Rookie of the Year and the chance that Jake Arrieta wins the Cy Young tonight.. isn't that some kind of baseball karma trifecta thing?
I wonder if any team has won all 4 BBWAA awards (the one missing this year is the MVP, which is surely soon to come for one of these Young Cubs).

Pretty much, the only time you'd ever hear me sing is during the 7th inning stretch.
And dance?
Never.
Except when Magic Zach Miller catches a Jay Cutler pass and ghosts his way through 3 Ram tacklers and is suddenly in the clear and then uses the jumbotron to check his rear view to evade that last guy who was gonna catch him.
87 yard touchdown.

I danced then.
Nobody else was in the room though, so... nobody knows.

PS: Yeah I was thinking about the Uma Thurman John Travolta Pulp Fiction dance with the hand in front of the face thing,

but you know... a Bears fan's gotta wipe the mustard off their chins so..there.