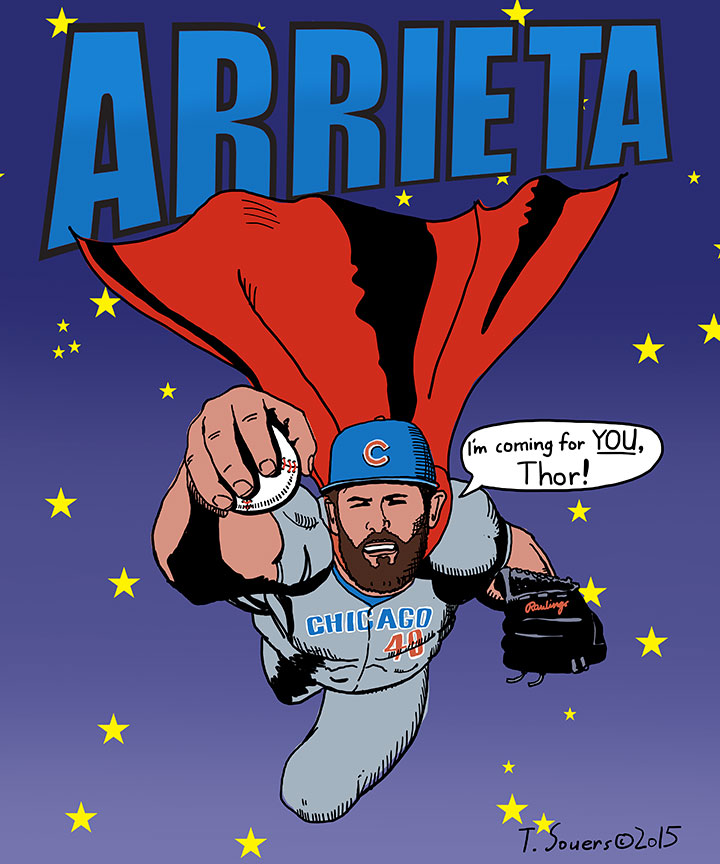 Well after last night, we could use a little bit of Superman, eh?
Not gonna rip Jon Lester, but the Mets had a much easier time with him than the Cubs had with Mets ace Matt Harvey.
I mean... Kyle Schwarber got in his long ball, but so did Mets' super-hot freak Daniel Murphy - his 4th of the playoffs.
That Murphy reminds me of ex Cub Donnie Murphy.
Remember how that streaky guy got hot with the Cubs and hit 11 homers in 46 games?
Yeah whatever, it ended up Mets 4 Cubs 2.

But these 7-gamers are mini marathons, and there's miles to go.
Starting with tonight's game at 7:07 on TBS.
Jake "Superman" Arrieta vs Noah "Thor" Syndergaard in game 2 of the 2015 National League Championship Series.
Can't wait!
Go get 'em Jake! 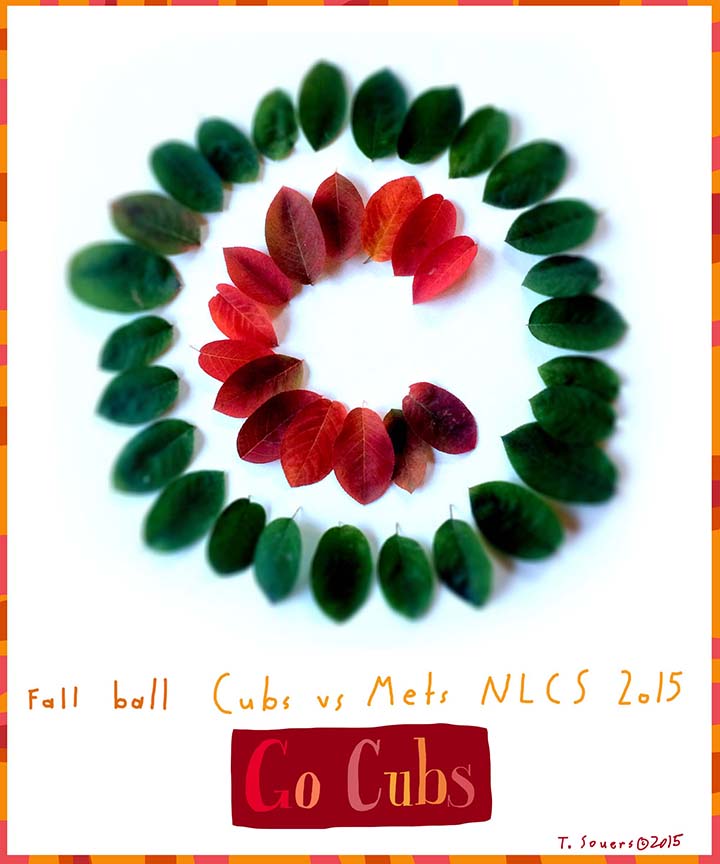 I don't know about you but...
Yeah I do.
You're walking around in heaven too.
The leaves are changing and your favorite team in all sports, the Chicago Cubs, is still playing baseball.
And playing baseball as good as anybody if not better.
So are the New York Mets.
And may I say that's the last time you'll hear me say "New York Mets".
Because now I'm putting my old Cubs hat on.
The one I used to wear in the '80s when the Mets were not only good but also in the same division as the Cubs, The East.
There was Doc Gooden and Darryl Strawberry and Keith Hernandez and Lenny Dykstra and Ray Knight and there wasn't any team you hated more (not even the Cardinals).
I know somewhere in this blog is the "dog ass" story.
We went to a Cubs v Mets game at Wrigley and sat next to a small crowd of guys who said "dog-ass" about everything.
"My dog-ass beer got warm."
"Yeah, it is dog-ass hot out, man."
And then.
"I hate the Dog-Ass Mets."
It immediately stuck with us, and now I'm gonna bring it back full time.
Because I do not like these Dog-Ass Mets either.
Although, I am SO HAPPY that that's who the Cubs will play (rather than L.A.)
I am SO HAPPY that they had to use Noah "Thor" Syndergaard in relief Thursday night.
I am SO HAPPY they had to take a bumpy 5+ hour flight from Los Angeles to New York.
Here's what it says on Mets.com: "Over the past five days, the Mets crisscrossed the country three times in the air, played a series of baseball games deep into the night, partied once, conducted countless interviews and slept fewer hours than any of them would care to admit."

I am SO HAPPY those sleepy bats gotta contend with Jon Lester tonight. 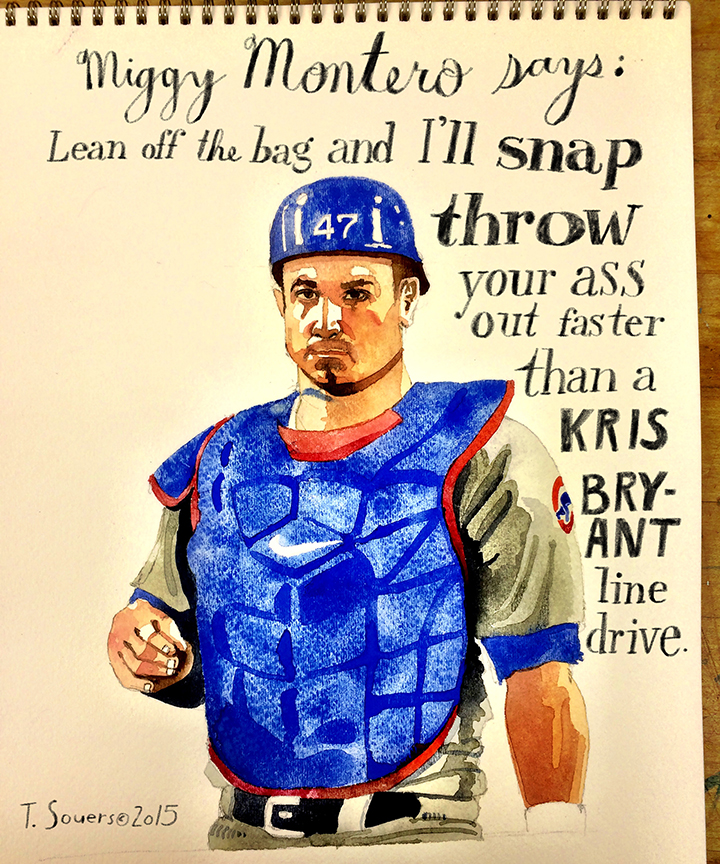 It's really about the meanest thing you can do to a baserunner, the snap throw pick off.
Bottom 2nd, Cards are already up by 2 and have some serious mojo going.
But Jason Hammell hits the unlikely single up the middle off Cardinal stud John Lackey, scoring Starlin Castro.
Lackey goes ballistic, yelling at backup catcher Tony Cruz something about "...WANTED TO THROW A FASTBALL."
He's come unglued.
Lackey's parts are falling off when he delivers to Javier Baez, who makes the pitch disappear into bleacherland.

Now the Cardinals are reeling, there are 2 down in the top of the 3rd.
Hammel is having issues and he throws 4 balls to Jason Heyward, the subject of this story.
Because now he's on first, and Miggy Montero, who is the other subject of this story, does not like Cardinals on first.
And this is the mean part.
If you're Heyward, you're thinking about stuff.
You're fast and you need to take that lead because your team needs to regain the mojo it just lost.
Jhonny Peralta is up.
That guy can hit.
And when he does... maybe you can even make it all the way around to 3rd.
Here comes the pitch, you take your couple steps and it's like you stepped on a rattlesnake.
That quick, Montero snap throws to Anthony Rizzo and it's his glove you slide back into rather than the bag.
The Wrigley crowd turns up to eleven, the ump's thumb is up and your pants are down.
Mojo denied.

A little thing maybe, but sometimes that's what this game is all about.

This is soooo immature.
Honestly, this post should just be all positive and all about the Cubs, but I can't help it because it's been such a long. time. coming.
The Cubs broke out their big bats and oh, maybe 20 pitchers to win Game Four 6-4 and take the NL Division Series (really, the Central) from the St. Louis Cardinals 3 games to 1.
Putting the Cards on notice that things have changed 'round here.
The Cubs arrived a tad early and are here to stay for a looooong time.

Man, have you ever seen anything like this?
Joe Maddon ran circles around Mike Metheny, and even with a 3rd time viewing in slo mo replay I could barely keep up.
Back to back squeeze plays?
I was at that one and had to ask the guy next to me what the hell just happened.
9 homers, some so majestic and timely you had to look around to make sure it everybody else saw it and it wasn't just in your head.
I mean... they only got invited to this go-round because of the massive shoulders of Jake Arrieta.
Things are moving so fast I'm still digesting what happened in Pittsburgh.
And yet, today was the first Cubs' post season series win in the history of Wrigley Field.
So really, it's just barely moved...
It's all so confusing - remember the 100th Anniversary of Wrigley coming a couple years after the 100th Anniversary of the Last Time The Cubs Won It All?
Yeah yeah whatever.
The important thing is all these kids who were really just kids a couple months ago are now for real Major League Baseball Players.
I cannot believe Kyle Schwarber.
He was a catcher in college about 5 minutes ago, and tonight he not only hit one over the Bud Sign at Wrigley Field, but he was playing left and you'd swear he'd been playing that position his whole life.
Anthony Rizzo has absolutely ruined Kevin Siegrist.
And how much fun was it watching John Lackey come unglued when Jason Hammel hit one up the middle and then got to walk the rest of the way home when Javier Baez jacked one out?
Listen, we'll have time to talk about all the amazing little things we've seen the last couple days... the play Addison Russell made at short to nail Jhonny Peralta on Saturday is one of the greatest plays I've ever seen, Kris Bryant creeping up to field a bunt and instead knocking a screaming liner up in the air and catching it.. and Starlin Castro and Travis Wood and Trevor Cahill and tonight Justin Grimm and Miguel Montero.

But I gotta go to bed.

What an impossible, amazing year.
And just to make it old school, I'm now praying for the Mets to win because come on... in this crazy year for the Cubs to play the Pirates, the Cardinals AND the Mets in one post season is a dream I didn't know I could have.

Thank you, Theo and Jed.

ps: I actually did the original version of that gif in 2012 or something. It's got more blood now. 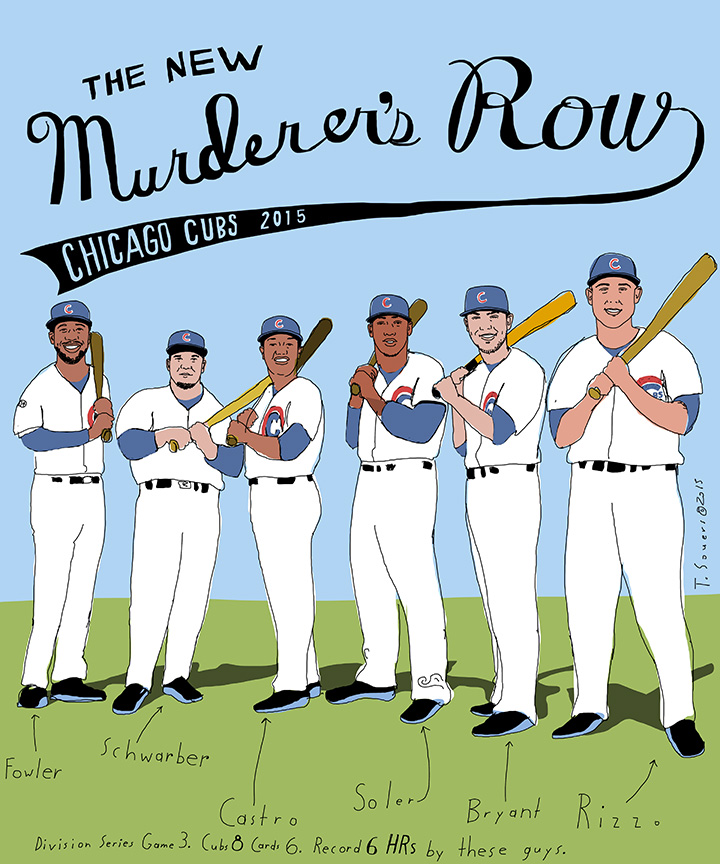 If you're reading this, I'm pretty sure you saw what I saw: a record setting performance by a hot young Chicago Cubs team that smacked around Cardinal pitching for 6 home runs.
Started with Schwarber - an old vet at this kind of thing after his Shot Into The Allegheny.
Then St. Louis did something nobody's done in months - scored on Jake Arrieta.
Twice.
Which made Starlin Castro kinda angry, coming up and hitting a Michael Wacha pitch over 400 feet.
Tie.
Ruined Cardinal mojo.
Then Kris Bryant, who'd gotten his first playoff hit earlier and seemed to relax, relaxed one into the stands, knocking out Wacha.
Anthony Rizzo took his turn at a homer, immediately wrecking Card reliever Kevin Siegrist's fun.
Then, my favorite dinger of the day was when Cardinal Legend Adam Wainwright came in relief and tried to throw a first pitch fastball past Jorge Soler.
Soler's been like a batting mystic, getting on base like 8 times in a row for a playoff record (he's not done, btw).
And Soler smoked that Wainwright pitch out of the park in about a one second flight.
In the bottom of the 8th it was Dexter Fowler's cool corkscrewy swing that knocked homer number 6 into the stands.
And that was all she wrote said the fat lady who was singing.

How do you feel?
I feel unusual, but a kind of awesome unusual.

Today it'll be a short-rested John Lackey vs. Jason Hammell.
Cubs vs Cardinals.
For the clinch.
At Wrigley Field.

ps: It's insanely busy as usual, I'll have the photos from Saturday's game up soon.
Go Cubs. 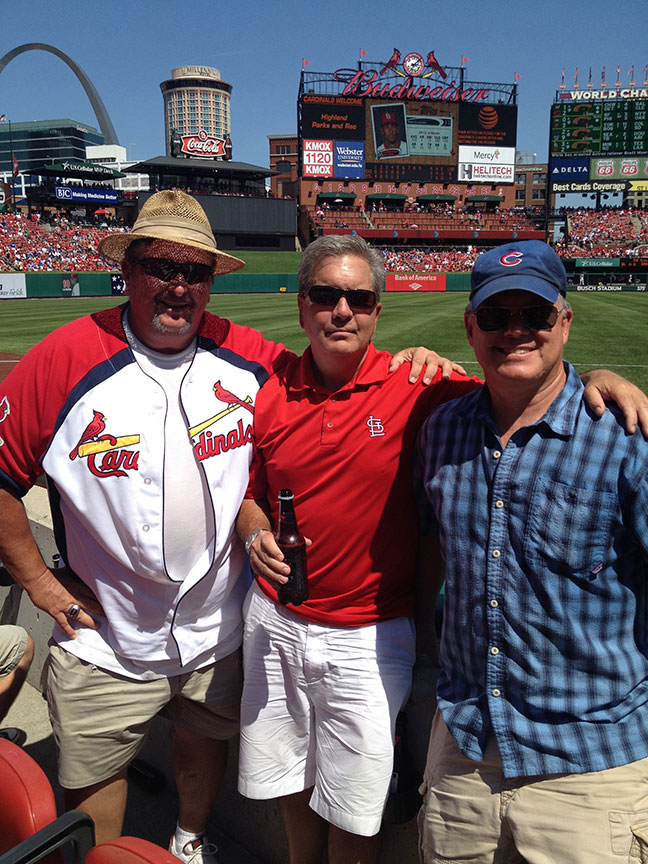 Went to a game down in St. Louis with 'em a couple years ago?
These are some of my best buds.
I went to grade school and 3 years of high school with these guys.
Then my dad got a job.
AHHHH HAHAHAHAHAHAHAHAHA!
(That one always slays me!)

Okay whatever, my buddy Sloppy John - the one in the middle - called out of nowhere last week with a plan: if the Cubs win the Wild Card, he could get tickets to the Saturday game.
One of the ones where the Chicago Cubs play the St. Louis Cardinals in an October series for the first time ever.
It's like all historical and shit.
(Pardon my language but this is my favorite rivalry in all sports I am kind of excited.)

So... probably I'm gonna be off the grid for a couple days but when I get back I'm sure to have a good story and some awesome pictures.
I plan on scramming after work today, tuning in my At Bat App (seriously, do you have a more valuable app?) and listening to Pat and Ron describe how the Cards can't seem to get a hit off Mr. Playoff Experience, Jon Lester.

Maybe while I'm driving, Kyle Schwarber will knock another one into some river.
And I'll get another text like this: 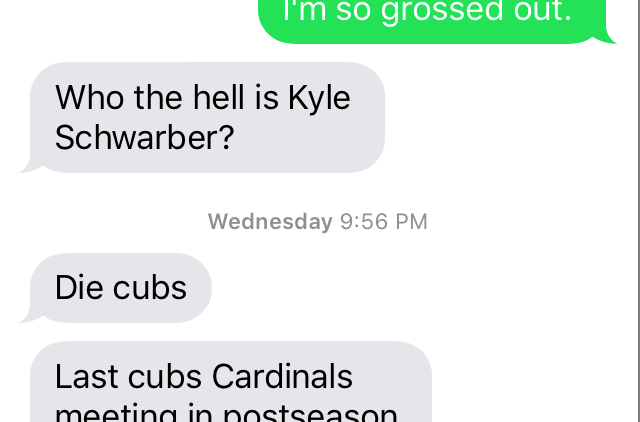 Of course he was being sarcastic, that came after Schwarber hit the airliner in PIttsburgh.

Anyway... I believe I'm about to have one fantastic ride.

Hey this just occurred to me: