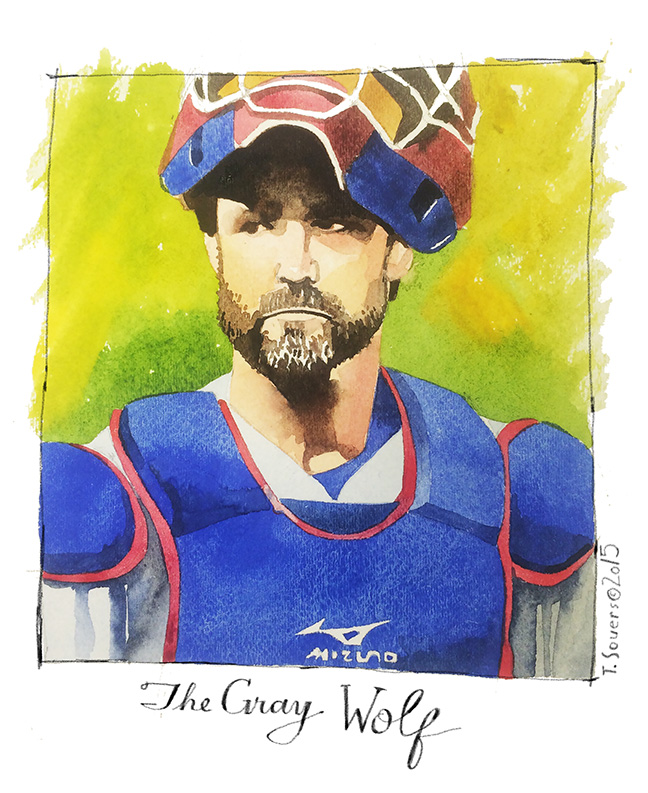 Well, dammit.
I was so hoping that Jon Lester would have pulled off another huge win, but it didn't happen.
The Cardinals beat the Cubs 4-3 and kept from getting swept by... come on man the Cubs have got to be one of the hottest teams in baseball!
Wait... in September, Tim?
Yeah I know, it's crazy.
The Cubs go back to 2 behind Pittsburgh who took two from the Dodgers in L.A., and the Pirates are 4 behind the Cards.
It's an amazing time to be a Cubs fan.
I so gotta run, but also wanted to say I saw this tweet from Lester after the big complete game 2-1 win in Pittsburgh: 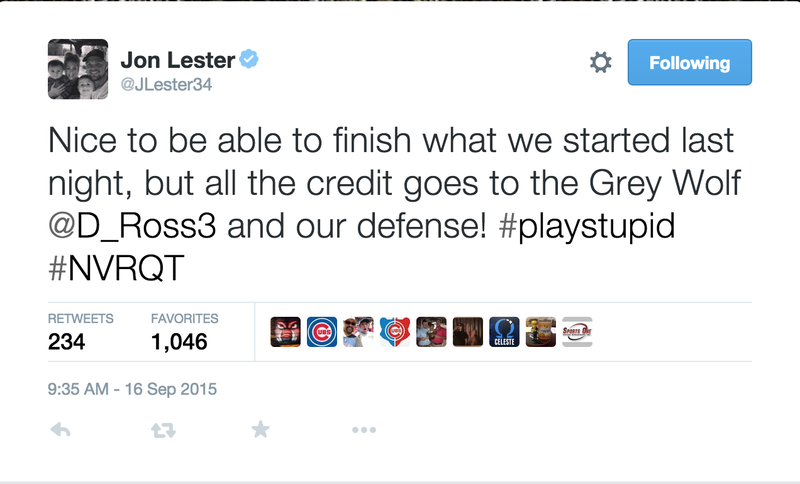 Introducing the St. Louis Cardinals Urinal Biscuit. For use at Wrigley Field.

This idea has been laying around on my blog, FOR FREE, since 2008.
Why can I not go to the men's room at Wrigley Field today and wizz on a Cardinals logo?
It's so simple.
HEY URINAL BISCUIT COMPANY, DO THIS IMMEDIATELY!
The Cardinals throw at Anthony Rizzo?
I PISS IN THEIR GENERAL DIRECTION!

I missed the game.
I was working.
I didn't see Haren hit Holliday in the head.
Well, I did online later, but whatever.
I still can't find any video of Rizzo getting plunked.
But I DID find the Joe Maddon video, and well, what can you say but damn that guy is good.
Read this from the St. Louis Post Dispatch.
Nice, Joe!
Seriously, nothing could validate the resurrection of the Cubs/Cards rivalry more than a little bad blood.
Bring it, Redbirds.
The Cubs are coming for you YEARS ahead of schedule.
And I see that the Pirates lost so... now the Cubs are just a game behind them.

Is this not the most impossibly cool path the Cubs have taken this season?
If anybody says they actually expected this, well... you're way smarter than me.
Starlin Castro's bigger story continues to amaze me, and his two dingers yesterday are the kinda stuff that makes Cardinal fans say, "Card killer".
KEEP IT UP, STARLIN!
It looks like it'll be Travis Wood back in a starting role vs Michael Wacha today.
Think Travis isn't pumped?
He looked pretty damned good striking out 5 of the last 6 Pirates a couple days ago.

ps: I don't get any days off, not that I'm complaining.
I'll just try to keep up the best I can.

When fishing, always name your bait after prominent Cardinals. 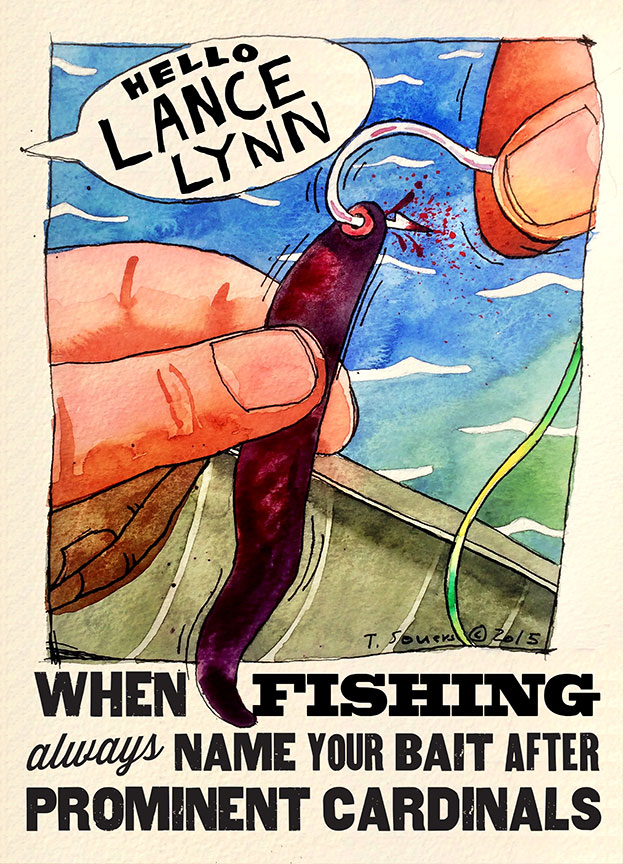 Hi.
Man are the Cubs on fire.
I just...
I just can't put in words the level of impossible joy I am walking around in all the time.
The Cubs are about to take game #1 of the Cardinal's series.
With Dan Haran as starter.
And took 3 of 4 vs Pittsburgh.
It just takes your breath away.
Anyway, I am so sorry but slammed beyond belief and will continue to be insanely busy for weeks.
I apologize but will find time...
This art you originally saw in the fishing post from earlier this year, I just like it.

Those are mighty big shoulders you got there, Jon Lester. 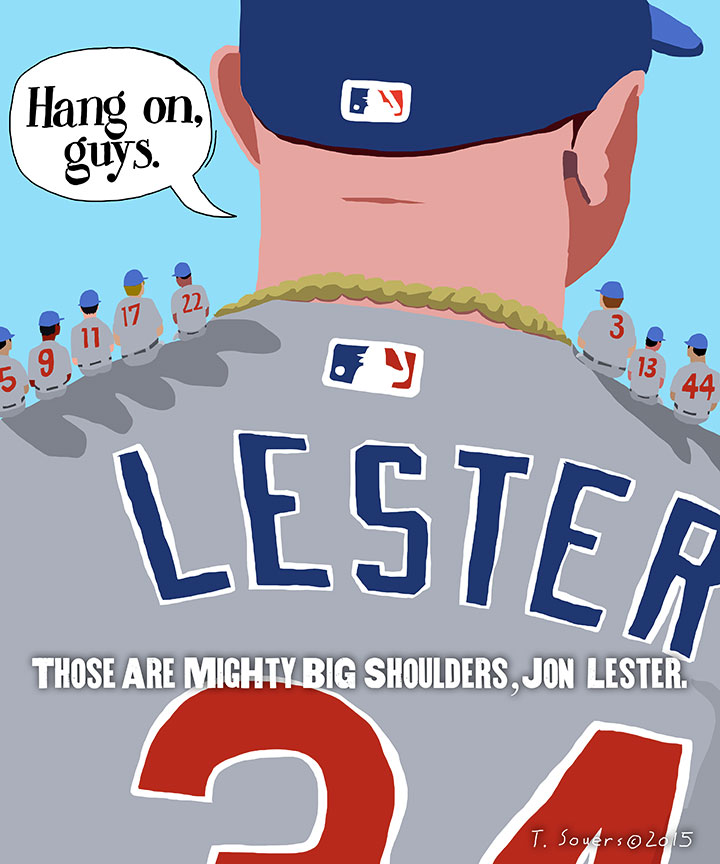 Wow.
Jon Lester.
Carrying the Cubs to... come on man, that was their biggest W of the year so far, right?
9 innings, 5 hits, 9 Ks and a wafer thin margin of error, because the bats just could not connect at clutch moments.
9 left on base, scoring opportunities way beyond what they gave the Pirates.
Cubs 2 Pirates 1.
So cheers to Mr. Lester - what an incredible job.

Had they pulled off a win in that first game - a game the Pirates tried to give away, we'd all be freaking out with confidence because Gerrit Cole is one tough s.o.b.
Didn't happen.
5-4 Pirates.
Water under bridge.

Tonight at 6 Chi-Time, Superman takes the mound.
The rare possibility of win #20 for Jake Arrieta, a Chicago Cub.

Sweaty?
Yeah, me too.

What a crap day for Chicago Sports.
First, the Bears.
We all knew what was gonna happen, and I have to say the spark the team played with overall was nice. Just... the end result sucked.
Aaron Rodgers owns the Central and the Bears and until the Bears can re-stock the D, it'll remain that way.
All that said, it's so nice to begin a new regime with John Fox, I hope he can at least lay some building blocks for the years to come.

Meanwhile in Philadelphia, the Cubs just didn't look so good against Aaron Harang and his band of.. nobody I ever heard of relievers, and lost their 2nd in a row 4-7 vs the Phils.

Monday is a welcome day off and then... well these games are just going to get more and more important as time goes on.

Starting with Tuesday's double header in Pittsburgh.
Game 1 Jon Lester vs Gerrit Cole who's 1-1 vs the Cubs this year.
Game 2 Jason Hammel vs J.A. Happ who only went 4.1 vs the Cubs earlier this year giving up 9 hits and 4 runs.

In the meantime... when you get home from work on Monday, I suggest you go out to your garden and pick your basil.
Do it now before you forget and it turns brown, and make some pesto for Tuesday's night game.
If I can do it so can you, spaz. 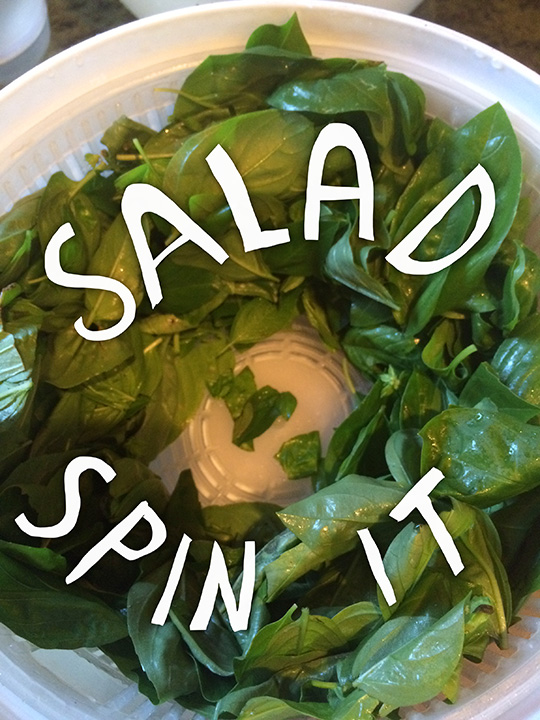 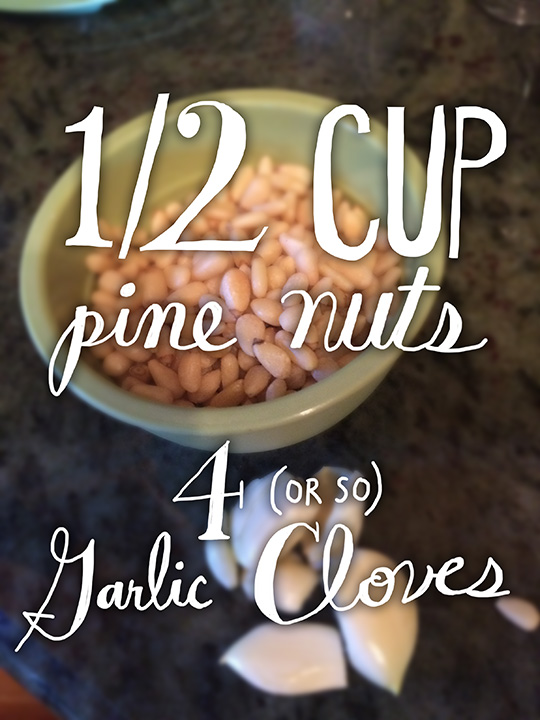 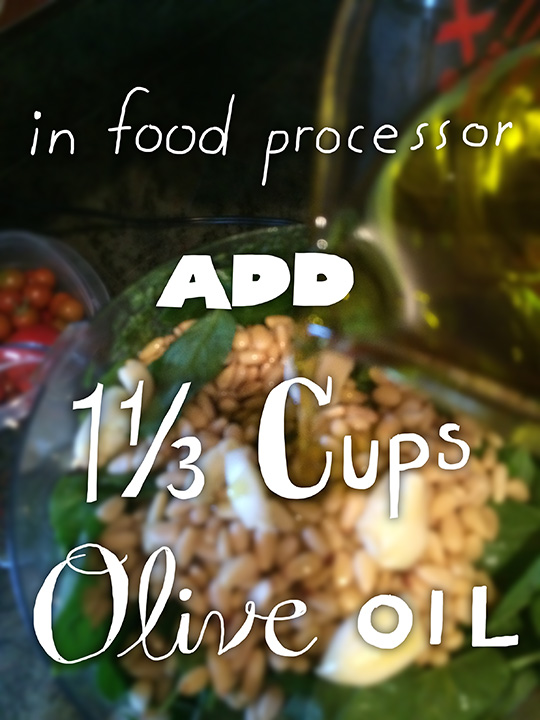 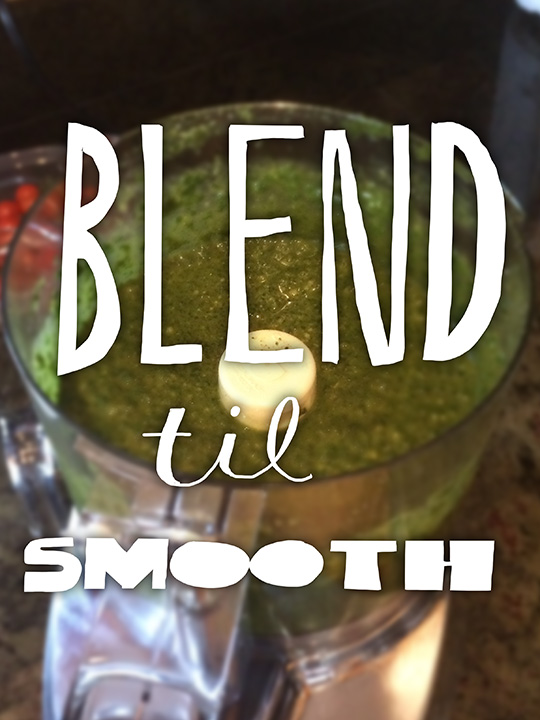 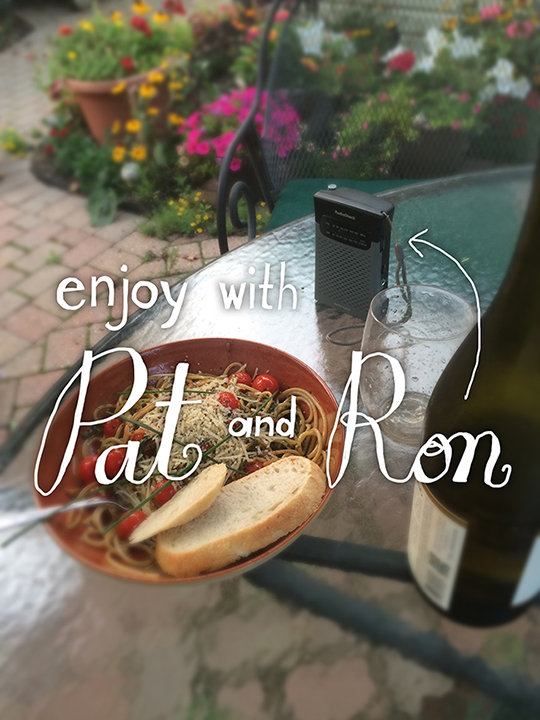 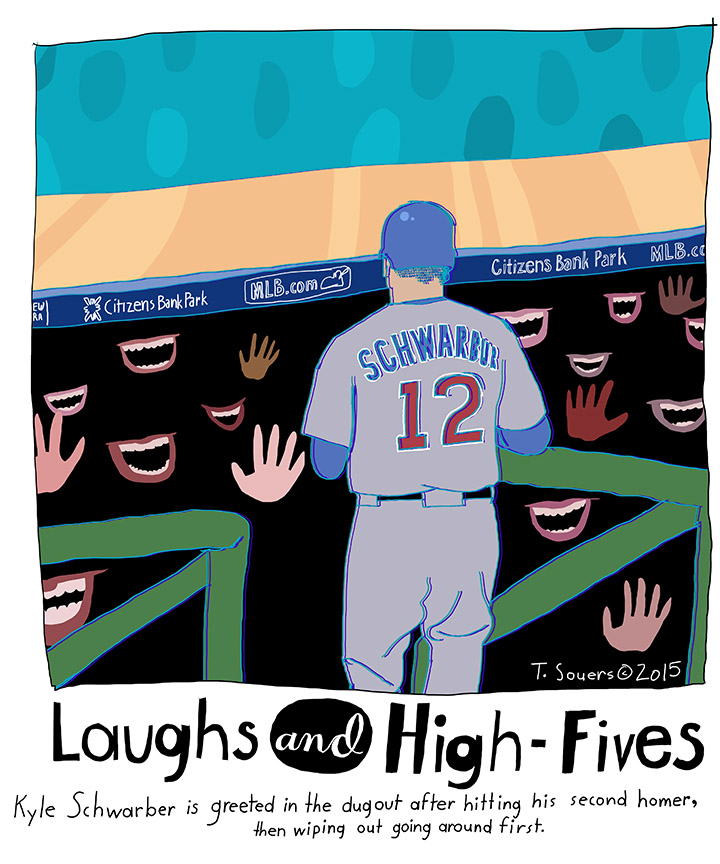 Well sure, the Phillies are awful.
But also the Cubs are just... really good.
When is the last time you had this much fun watching baseball?
Yesterday afternoon, Jake Arrieta had another dominant performance and won game #19.
Not being jinxy but I expect he'll get 20 wins.
Then game 2 comes, and it begins with Kyle Schwarber hitting the first pitch he sees off Alec Asher into the bleachers.
Like 450 feet up there.
Then in the second inning, he does the same thing with the 2nd pitch he sees from Asher.
It was the greatest thing.
He hits it, camera cuts and we see it go out, Len makes the call but also laughingly says, "Did you see Shwarber?"
No we hadn't yet, but then we got to see all the angles of him running around first (I think he didn't think it was going out), wiping out, attempting to call himself safe while on his stomach, cut to Rizzo pointing and laughing, cut to Schwarber rounding 3rd and running into the dugout with everybody laughing and high-fiving.
I fell off the couch laughing.
Swear to god, it's moments like that that'll stick with you forever as you watch this team sort of... it's not like watching something being born, it's rather like watching the Big Bang Theory (not the tv show, either).
We all laugh because we've been waiting for this time forEVER, but it's kind of like one minute there was nothing, and now look.
It's the freaking Chicago Cubs and they are open for business like never before.

Tonight it'll be Dan Haran, and tomorrow will be a mystery pitcher as the Cubs figure out how to line up Arrieta with the Pirates come Wild Card Day.

One last thing - Kyle Hendricks.
Don't be puttin' that guy on the scrap heap.
He went 6.2 last night and yeah it's the Phillies but he's still just 25 and in his first full year of starting.

And remind me to tell you how I was damn near in one of the 2015 post season commercials for MLB.