Starlin Castro has trade rumors rattling around in his head.

I'm pretty sure Starlin Castro has had "trade" in his head all year long.
He's like the first name you hear about when talking about who the Cubs could/would trade.
And that can't help him on the field, you know?
Look:

Yeah, that can't be helping at all.

And today, there's this at MLB Trade Rumors.
When the word "aggressively" is used in the same sentence as "move", it's even worse.
So today's the deadline, and we'll see what happens.

Yesterday was a travel day for me.
11:15 flight, but...
3 mini-delays as plane was a little early arriving, then they cleaned the plane and cooled the plane and finally we get on to find out there's a mechanical problem so it's actually over an hour.
It was just a long day.
When I get home, however, I turn on the tv to see that the Cubs are losing to the Brewers but they've got guys on, and then Anthony Rizzo hit such a gorgeous 3-run homer I forgot how crappy the rest of the day was.
He hit it and it was in the upper deck in the blink of an eye.
Really whacked it.
And then Strop and Rondon kept any Brewer excitement away as the Cubs got a couple insurance runs.
Cubs 5 Brewers 2.
Gorgeous.

There have been so many trades that I can't even comment.
Lets see if the Cubs can do something smart today. 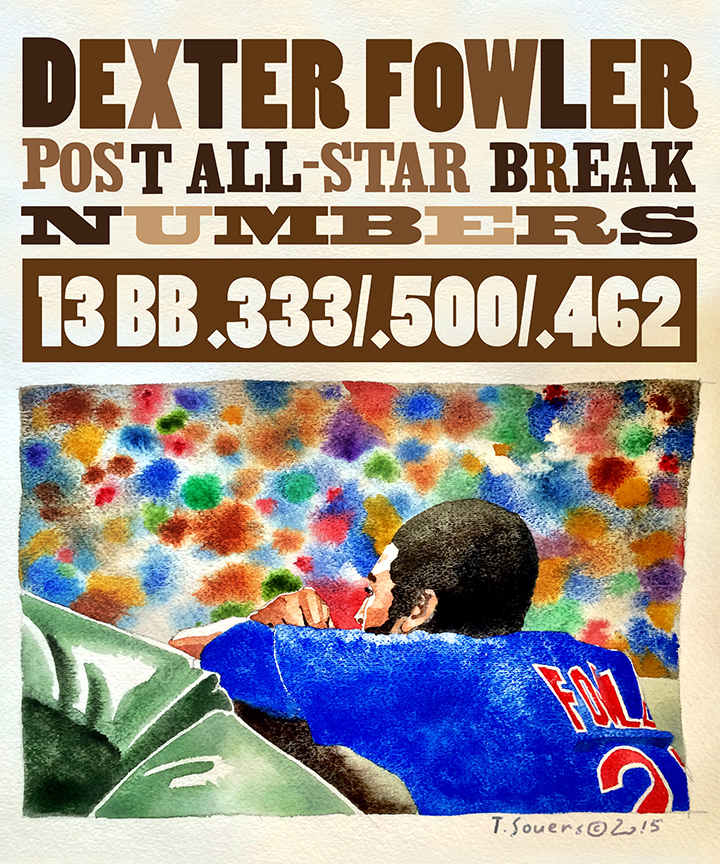 Dexter Fowler has been a starter for 7 years now.
Not an All-Star guy but someone Management brought in as a kind of lead-off veteran guy on a team they knew was going really young.
He should be one of the guys to help the kids through the "rough patches" Joe Maddon told us were gonna come.
Like this one.
The Cubs are 4-6 over their last 10.
(If not for Kris Byrant's heroic 9th inning 2-run walk-off dinger Monday, it would be a game worse.)
But as you can see from the numbers up top, Fowler's been pretty hot since the break which coincides with this skidmark in an otherwise pretty awesome season.
That's called doing your job.
Nobody expects Fowler to end up with a near-1.000 OPS, but I sure wouldn't mind if this second half was alot better than the first for him, and this is a really nice start.

And this "rough patch".
How you holding up?
What if the Cubs don't make a move?
There are certain things that would be okay or even great that the Cubs could do, but right now I'm hoping Theo and Jed just keep their eyes on the big picture.
We all got excited this year about the prospect of getting into the playoffs.
And of course that would be great and may still happen, but if it doesn't?
Bummer, but it's not a gut wrenching heart-breaker.

This isn't the season to go all in and do a Billy Beane (weird that I think that way of him after last year).
But damn a starting pitcher would sure be nice about now...

One thing from BP.
They have a regular article called "What Scouts Are Saying".
Here's the lead in to the newest one:
"Kyle Schwarber. I just filed a report on him and said he has a slider speed glove. He can hit though. He’s the best bat I’ve seen all year."
I assume that means he has a little trouble catching the fastball.
But we all know what the last part means.

Hey man, your guess is as good as mine.
The Cubs have a rich history of players who took too much advantage of having nights off in Chicago because they played mostly day games, but this is a different group of guys.
That ain't it.
It's kind of a mystery.
In games after a day off, the Cubs have 2 wins and 9 losses.
There are 4 losses at home, and 5 away.
The wins are 1 away and 1 at home.
Overall the Cubs have been outscored 43 to 21 in these games.
What gives?
I couldn't tell you, but it's a "thing" isn't it?
Mental preparation?
Maybe.

The loss yesterday was particularly galling since the Phillies are so bad and in such disarray.
They lead all baseball by far in losses with 63.
Today we'll see Cole Hamels who is of course Mr. Starter Trade Rumor Guy for us in Chicago, vs Jake "The Brake" Arrieta.
A win would make us all feel better, Jake, so do your thing.

(Still all nutty with work, sorry) 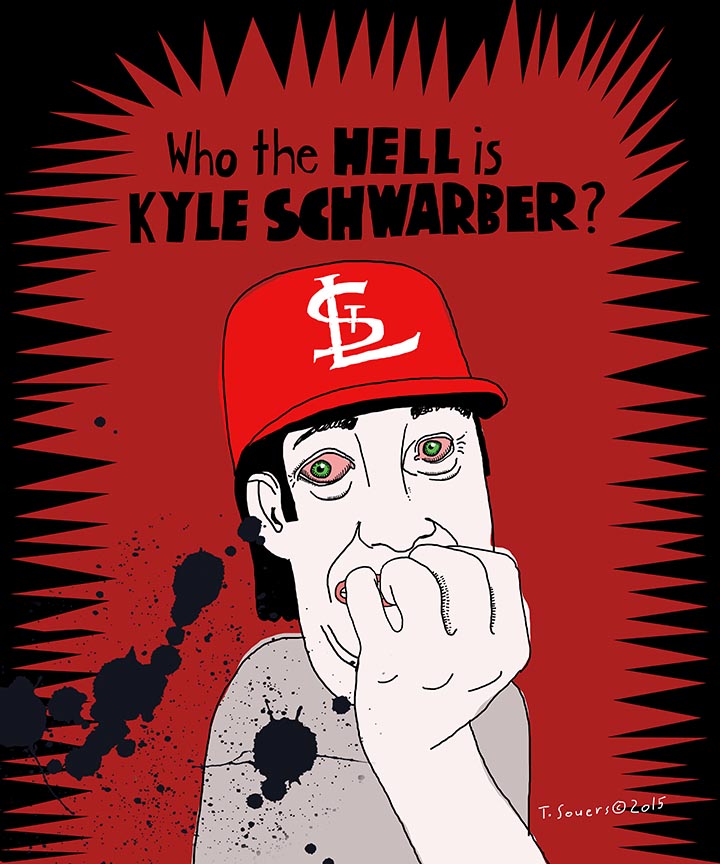 Late last night I got a message from Dickie the Cardinal Fan that I didn't see until I got up this morning.
Here it is:

Nothing better than having the story of the 2015 Chicago Cubs write itself, you know?

"Who the hell is Kyle Schwarber?"

Let me tell you, Dickie.
Remember that dream you told me about?
The awesome one where you were flying and it was SO cool, but then you noticed there was a big string around your neck and you looked down to see it was attached to the front foot of that giant frog, and all you could do was fly in circles, and then it opened it's mouth with all the big pointy shark teeth and it's tongue shot out at you and you woke up sweaty and crying?
He's worse than that nightmare, buddy.
He's a kid fresh from playing college ball at Indiana who got drafted by the Cubs last year as a catcher who could hit with the emphasis on hit.
The Cubs brought him up awhile back to DH in some games against Cleveland and Minnesota where he went 8 for 21 with a triple and a homer before they sent him back down.

So he said hell man, how's about I win the MVP in this year's All-Star Future's Game?

Then Miguel Montero jammed his thumb and went on the DL and Cubs management said hey this kid can hit and he's telling everybody he can catch... lets bring him back up and put him behind the plate.
And as you can see, the kid can rake.
Last night he went 4 for 7 with 4 RBIs and a couple dingers in front of his home town buddies (he's from Cincinnati) to carry the Cubs to a 13 inning 5-4 W over the Reds.

What he is is the latest example of The Cubs Way.
Part of this first wave of prospects who you probably think came out of nowhere just like every time the Cardinals bring up some guy and I say to you, "Who the hell is THAT guy?"

That's who he is.
Just another Cub perhaps beginning a legendary career in 2015.

God I love this team.

ps: I will continue to be in hell for awhile, sorry again for the spotty posting

Cubs Jon Lester back to his usual self: awesome. 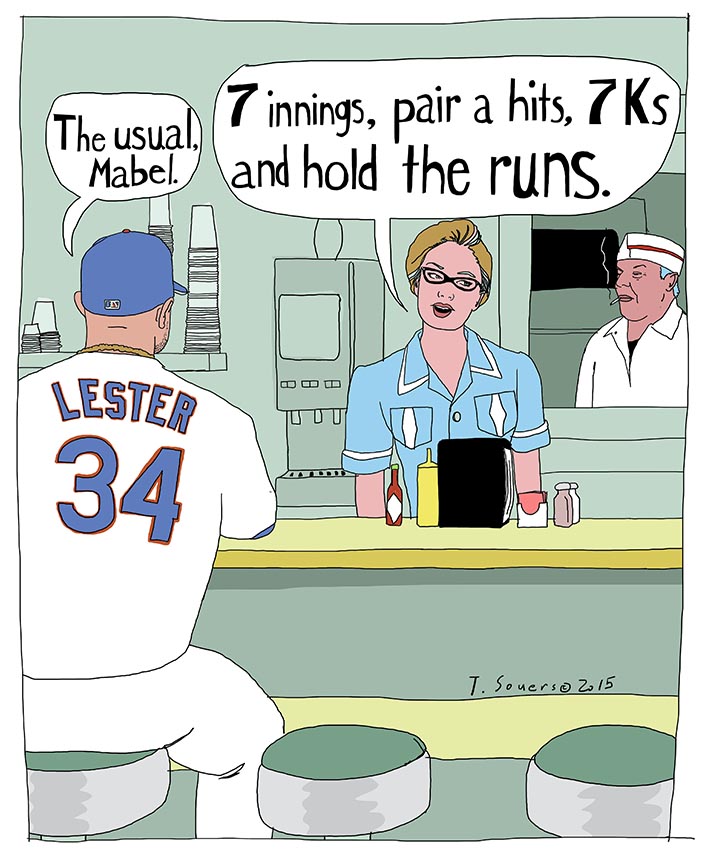 Isn't it nice to have the normal Jon Lester?
That guy we all expected?
The "Ace"?
He's been pitching really well lately, and it couldn't come at a better time.
7.1 innings, 1 walk, couple hits, no runs... the usual!
Cubs 4 Braves zeero.
I can get really used to that.

I told you it's insanely busy at work. Still going on.
Got home well into the game, turned on the radio, fired up the grill, and it all sounded like a routine game and... suddenly Pat Hughes is talking about a no-hitter.
How weird was it when the official scorer changed his mind on a first inning hit and instead gave Bryant an error?
In the 7th inning.
So instead of a basic one hitter, it changed into a no no.
That's when I ran into the house to turn on the tube just in time to see AJ Pierzynzki hit the liner.
Of course!
How long can one man continue to show up at odd times and annoy me again and again?
For God's Sake, AJ: retire.
Go away.
Leave me alone.

Anyway, kind of awesome with the big win.
I didn't get a chance to say anything, but this team... I've never seen anything like it.
Miguel Montero goes down with a thumb, and ho hum la di daaaa okay well we'll bring up THE NEXT BEST HITTING PROSPECT in the system: Kyle Schwarber.
I thought he did pretty good, and no this isn't his first time up but that first time was just a luxury.
This time it's serious and for real.
When Strop went off the rails, I was amazed to watch the kid walk out to the mound and do that catcher thing - getting on the same page and calming the situation.
I can't even get angry at Strop because I'm so gobsmacked at the entire show.
Schwarber, Bryant, Rizzo, Soler, Russell all hitting in the same lineup in 2015?
THAT'S IMPOSSIBLE!
I thought that was years away.
I love this team.

Okay enough babbling.
Today at 4 it's the Jake Arrieta Show.
I LOVE THIS TEAM.

PS: Yeah so, no days off in the foreseeable future so again... sorry for the spotty posting.

If you go back to the end of last season, I mean I can't speak for everybody but I thought hey, if they can bring up a couple of the kids and begin the Next Journey even playing .500 ball, I'd be over the moon.
That didn't happen.
Instead they're 7 over at the break with 47 wins, the 5th best in the NL.
I'd call that ahead of schedule.
Exceeding expectations.
Playoff talk is real.
Can 3 teams from the same division make it?
You betcha.

On the steak scale that's about medium rare.

I have no doubt there are about to be changes.
And I trust that Cub Management won't overdo it.
Like, it's not the right year to go all in like Billy Beane did last year, right?
But a couple moves for some improvement and maaan, pull that thing off the grill.

This has been BY FAR the most enjoyable baseball summer in forever.
Keep it up.

psps: I regret to say that the rest of this week is an absolute trainwreck of being slammed for me. I'll do my best but... just know I'm not ignoring anything, it's just busy.

pspsps: that cow thing. I took it from this giant hunk of beef Joe Pytka got us one time at a place called Peter Luger's in NY. It must have been a prime rib, but it was longer with no bones. We'd been hunting locations in bad traffic and Joe's not an easy man to please when it comes to his locations, so it was kind of difficult. Suddenly we were in Brooklyn and all the vans stopped.
Everybody was recharged and ready to go.
One of my favorite production memories.