Cards sweep Cubs. That hurt for real for the first time in years. 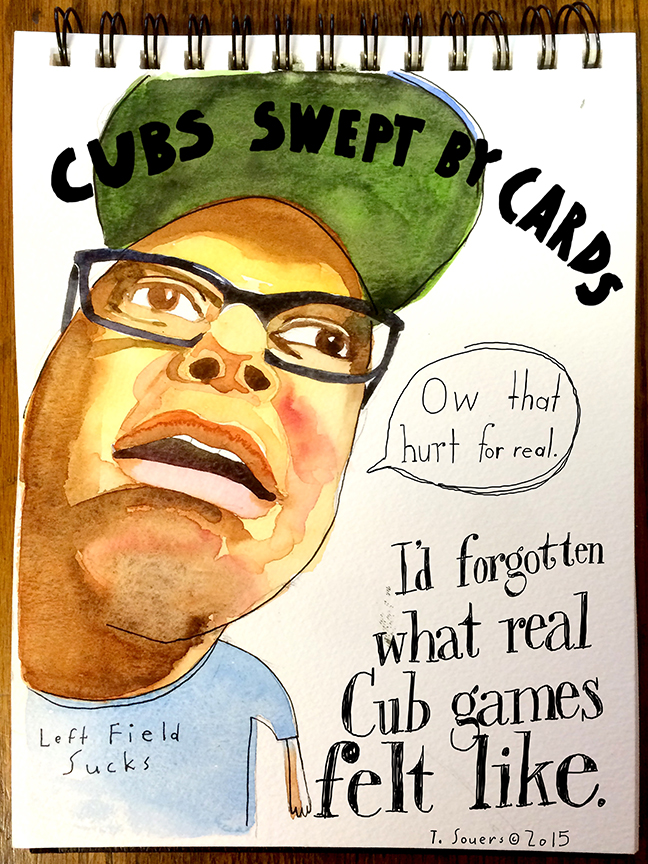 Well, life's just different now.
Go back to '09.
The Cubs finish in 2nd behind the Cardinals with 83 wins, but we all knew Jim Hendry had screwed the pooch with the whole Milton Bradley/we-can-fix-everything-if-we-hit-left-handed mess, and change was in order.
New ownership came with the Ricketts, and they had to feel their way into the Bigs.
And 7 years went by where the Cubs were either losing because they sucked or losing by design.

I hadn't realized the toll that took - the sort of dulling of one's Cub Fan Senses over the years.

The other day, the Cardinals swept the 2015 Cubs, and there was a depth to that hurt I'd just forgotten about.

I'm not talking about the hate for other teams - and of course the Cubs/Cards rivalry never stops.
But it had turned into the kind of thing where the Cards would win and you'd just think well it doesn't really matter - the Cubs are rebuilding yada yada.

It's so different now.
Took me by surprise is all.
While the sweep was painful, it's nice to be back here in the real world.
Of baseball.

Man.
Too bad about that first Cardinal game.
Jake Arrieta was masterful.
7 innings, 3 hits 2 walks and a run.
That should do it, right?
Not Friday.
A bullpen whoopsie.
Cards 3 Cubs 2
Hey - how many one-run games can we expect the Cubs to win in one season?
Still, they should have found a way.
Because yesterday was going to be a call-up, turned out to be Don Roach, he goes 3.1 and gives up 4 which you kinda can't do against the Cards.
Then Travis Wood was kinda wild with the walks and he gives up 4 and you're done.
Cards 8 Cubs 1.

Which brings us to today and Jason Hammel.
Jason Hammel who has been kind of a Superman this year.
It's up to you to stop this losing streak!

Cubs vs Cardinals tonight on ESPN.

Be so nice to salvage one out of St. Louis.
I can't believe they already have 50 wins.
Not even July yet.
Galling.
Amazing.
No, just galling.

PS: This is so cruel, I got some kinda revolting summer illness. Not enough sleep lately. And I am beat up.
I'll try my best to keep current and thanks for hanging around.

If you read here yesterday, you know I was going down to Wrigley and get a ticket from a scalper.
It was a Thursday, kind of a meh day out, I figured no way it's a sellout.

Walking down Clark and long before I get to the park, I decline to buy tickets twice - one for a hundred, one a hundred twenty.
For your basic terrace Wrigley seat.
Forget that.

I go to an actual Wrigley ticket window and ask the woman for her best seat.
She punches in buttons on her computer and it takes her 5 minutes to tell me standing room only.
I didn't ask how much, I just turned around and ran into a guy right there asking me if I want a ticket and I say no, deciding my best bet is the apartment building on Addison.

I walk up into their building - they have 2 windows like a professional ticket office.
The guy says, "Go out on the sidewalk in front and ask for Pete."
(I can't remember the actual name, but whatever)
And Pete wants $110 for a terrace seat that could easily be behind a pole. I hate the seats under the upper deck anyway.
So now I'm thinking forget everything, I'll go watch at a bar on Southport.

I walk across the street and there's the same guy from next to the ticket window.
He's got a ticket down the left field line he'll sell for under face - $50, and I'll be sitting next to his friends.
I take it.
I walk in the park, and Lester's already given up 2.
I'm greeted by the guys I'm sitting next to - they're expecting someone, right?

Joke's always on me.

Anyway, I look out on the field, take a picture of Lester.
It turned out to be what must have been when he barked at the ump.

Because then the ump came off the mound like he wanted to go punch Lester, and Ross jumped in front of him to talk sense. 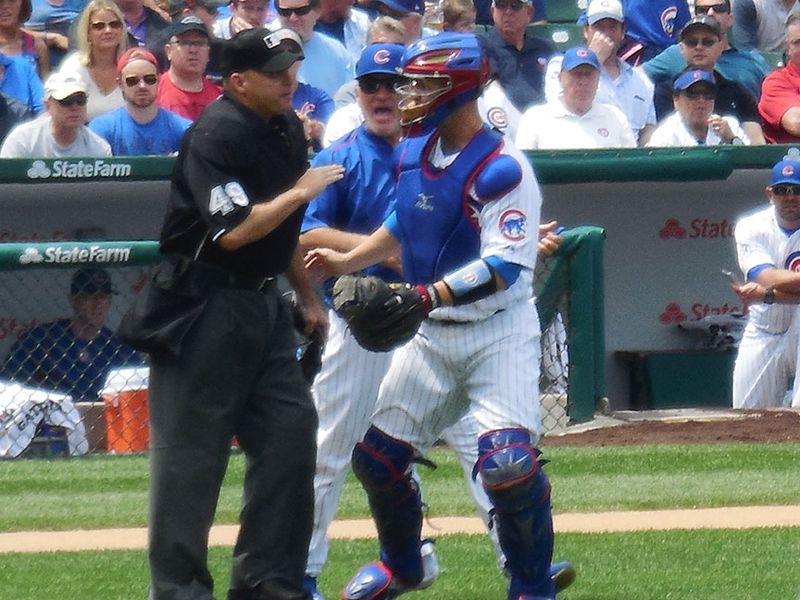 Then Maddon took over. Looks like he's saying, "Whoa brother. My guy shouldn't have said that, man." 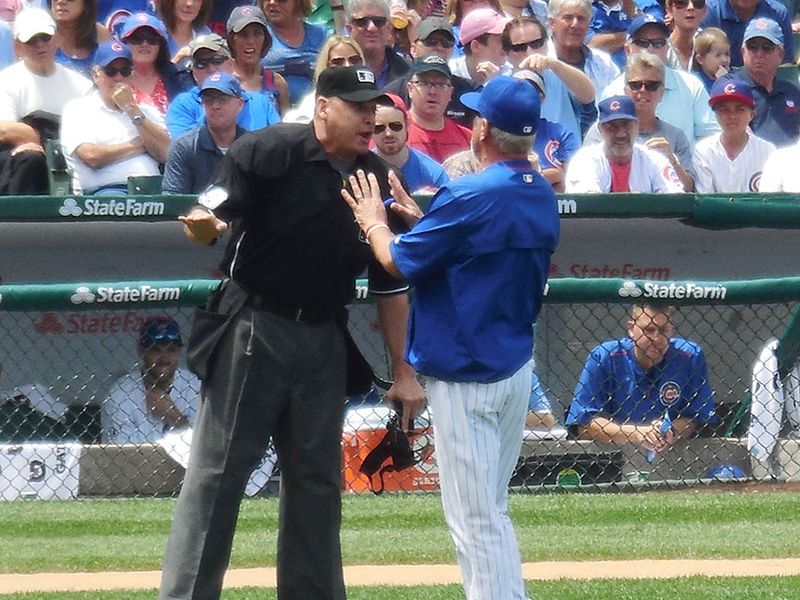 Lester stood at the end of the mound. 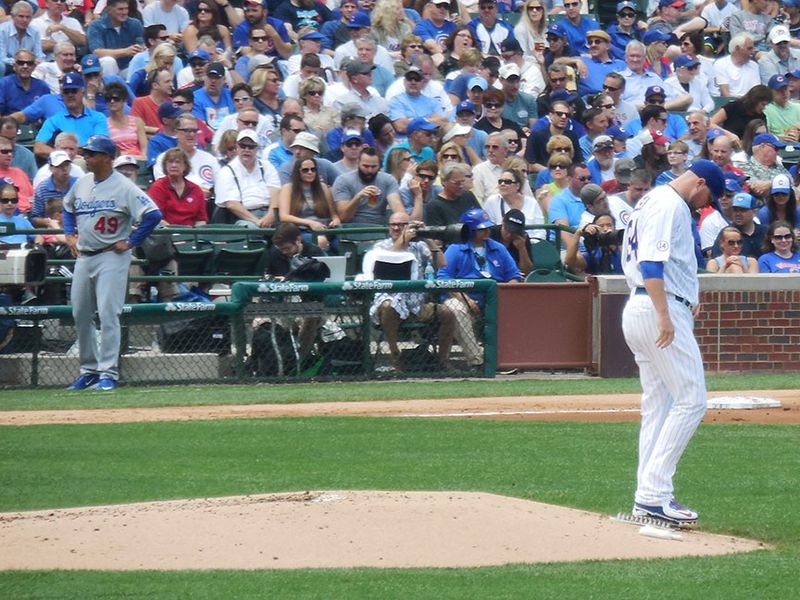 Disaster averted, the game goes on.
But Lester would have his shortest outing of the year.
Rizzo came up in the bottom of the inning and hit a double. 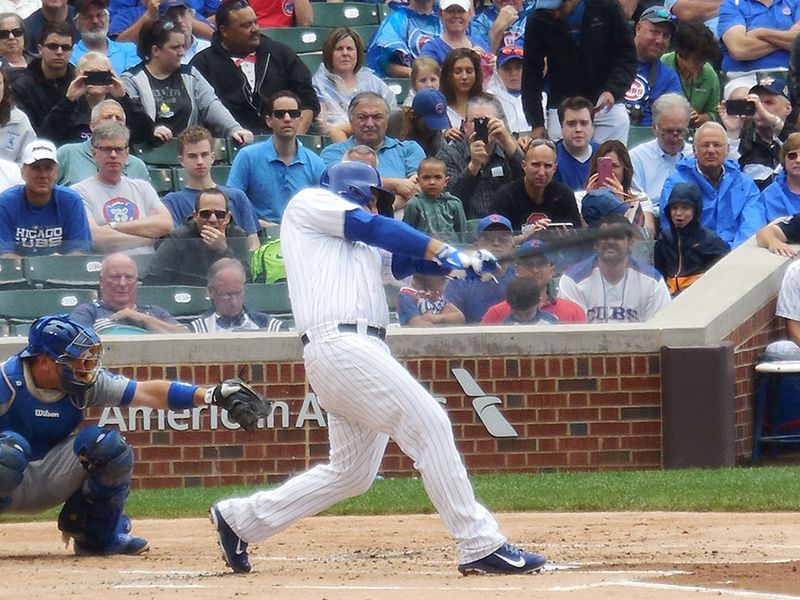 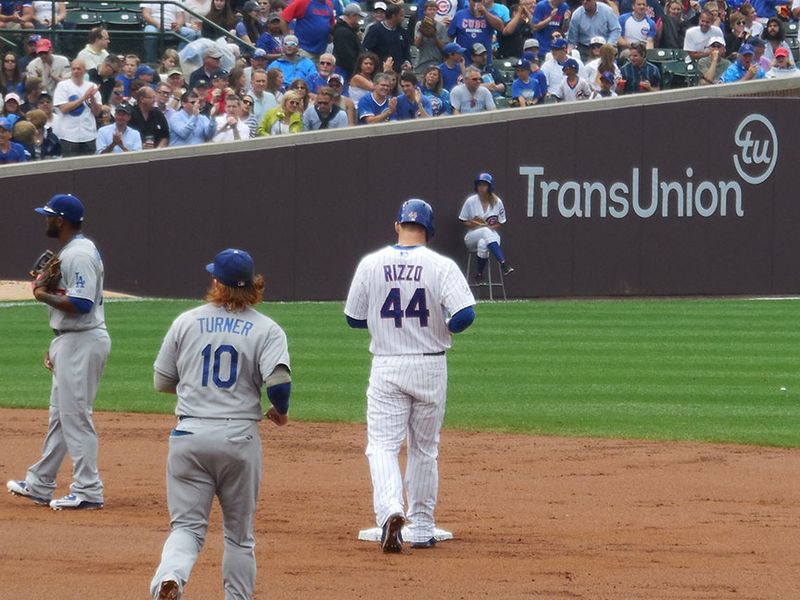 He would go 3 for 4 and, other than Denorfia's amazing diving catch in center, was the lone bright spot all day long.
I mean, for the game.

One really cool thing was... this beer vendor comes by.
He looks vaguely familiar.
I go, "Hey, didn't you used to be The Sheriiff?"
Back in the '80s, when me and the guys first got serious about going to games literally all the time, The Sherrif was our guy. 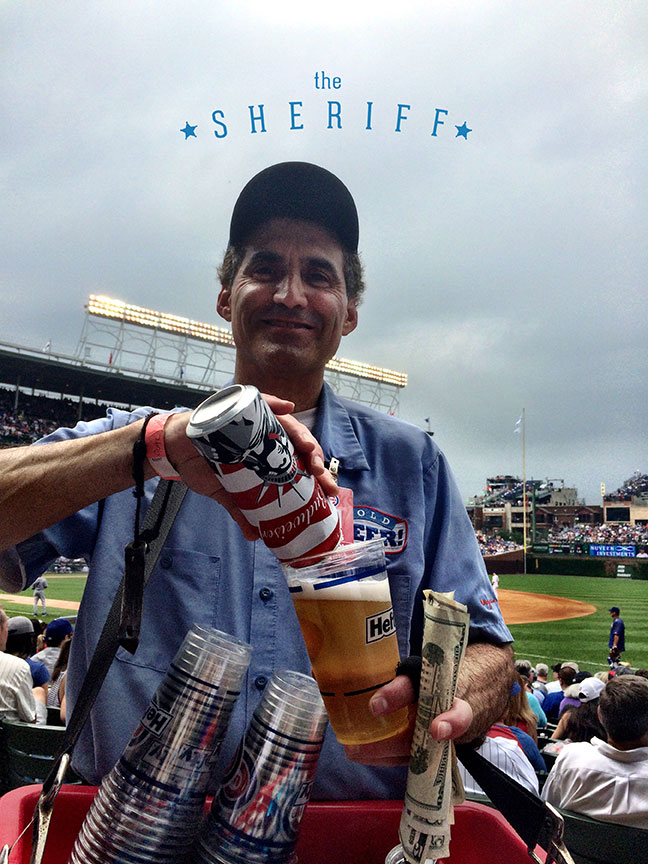 Still there, I can't believe I hadn't seen him in all those years.

Also, right in front of me was a young Private in full uniform who turned out to be this guy on the big screen: 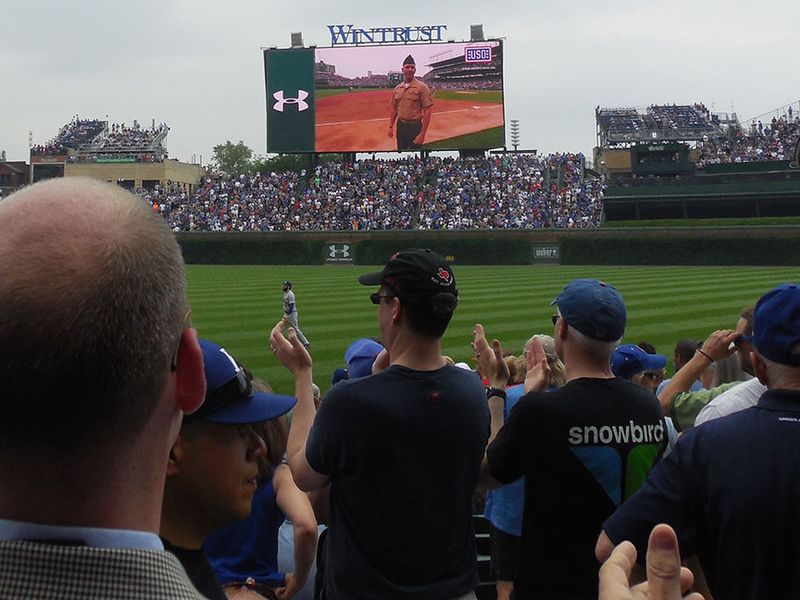 And this turned out to be my fav pic of the day: 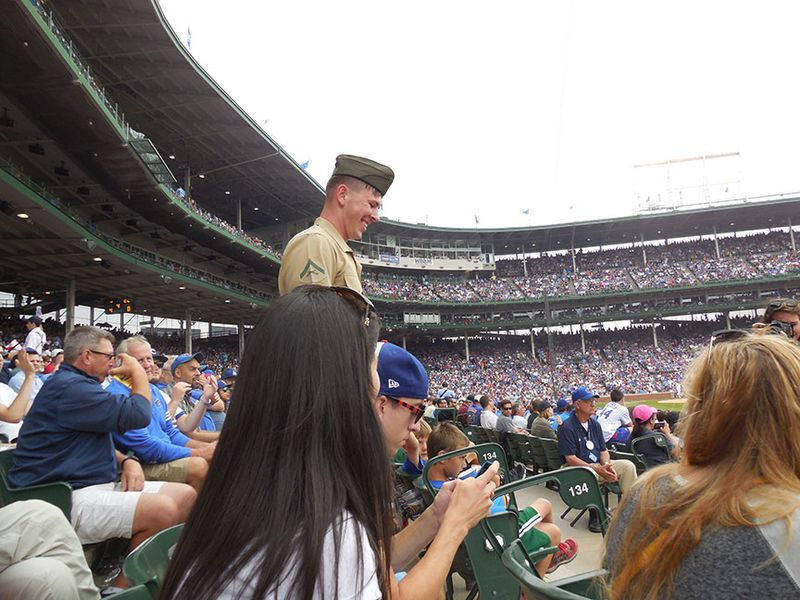 Compositionally and quite by accident, he's above the crowd.
And you can't help but think how young he is.
After this, he was constantly thanked by everyone who walked by.
Kinda cool, right?

And I'll leave you with this: 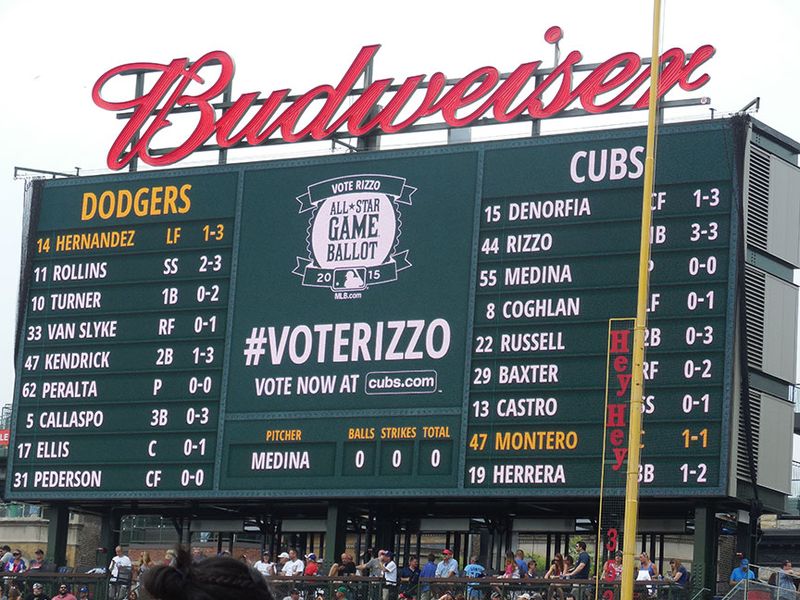 Now, go do your duty and VOTE FOR RIZZO!
Yes we have Kris Bryant who is and will be horrifying for opposing pitchers for a loooong time.
But right now, your own Anthony Rizzo is THE beast on this 2015 Cubs team.
Good God, is he good.

Going to Wrigley to speak to a scalper. 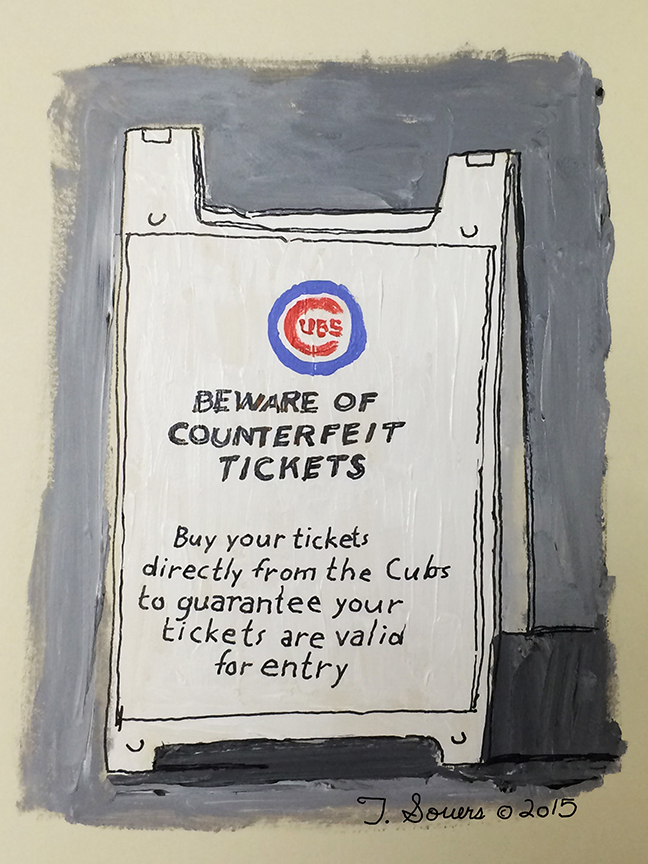 You've seen those guys in Wrigley's neighborhood.
"Who's got an extra?"
Those guys?
I think they have a union - they're always there and seem to be on every block the closer you get.
It's rarely happened to me, having an extra, but for instance one time I went way out of my way and actually found an nice old guy and his grandson and sold for face.
And I felt really good about it, the right thing to do and all that.
Karma.
Today I'm gonna go down to Wrigley and talk to some scalpers.
See if Karma pays me back.
I'll probably end up buying in one of those apartment buildings on Addison next to that place that sells overpriced t-shirts - or maybe just wander up to one of the actual ticket windows.
Can't be a sellout today, right?
Anyway, you know I've been extremely slammed and today is a break so... I'm outta here.
Jon Lester?
A chance to take 3 of 4 from the Dodgers and, if that happens, equal their win total at 40.
Sweet.
I missed so much.
The guy with the baby thing, a 4-game winning streak, getting to 9 wins above .500, the Joe Maddon on-purpose-delay-of-game-to-steal-Kershaw's-attention...
Maybe something amazing will happen today.
I'll let you know.
Go Cubs.

2 quick stories.
Buddy of mine is at a restaurant, and one of his kids must have been wearing a Hawks' jersey, but anyway in walks Joel Quenneville who comes over to their table to shake everyone's hand.
That's just cool.
Another guy at work was at a Dierks Bently concert, and he's got this song called "Drunk on a plane".
So before the song he's talking to the crowd and says something like: "You need a really big cup to get drunk on a plane."
Then out walks Jonathan Toews, Patrick Kane, Duncan Keith and some others and they're carrying the Stanley Cup.
Bentley hoisted it along with the other guys.
Went back to my office and googled the story.
Apparently, only the winning players are supposed to do that and it made some Twitter hockey fans mad.
Lighten up, man.
That Cup is a rolling party, it doesn't come around that often, and the whole deal of it showing up at a concert is just so hockey.
No other sport has their stars just out in public like that, and it's so... so hockey is the only way I can describe it. 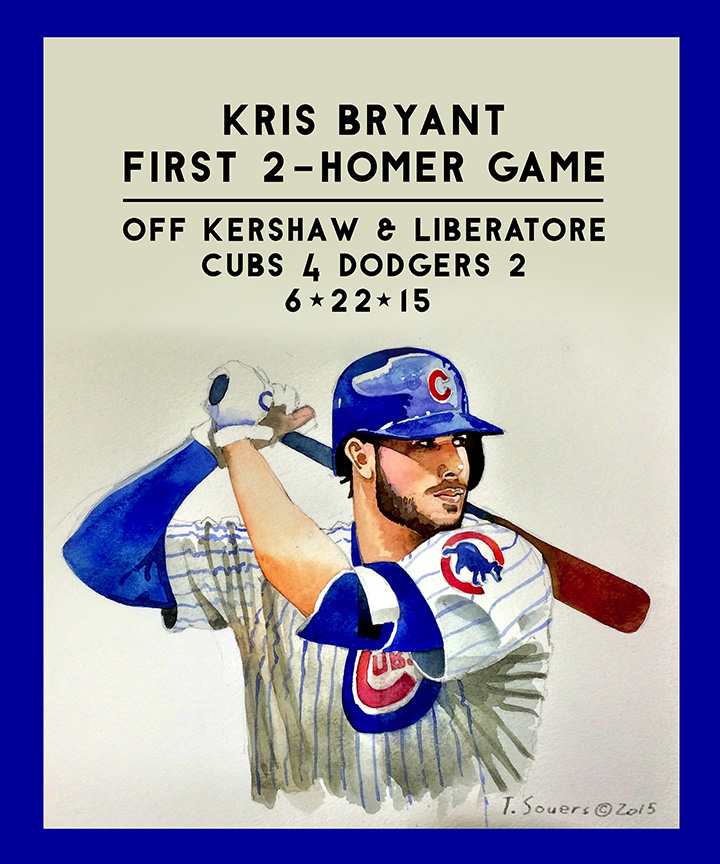 Sorry still slammed with no end in sight.
I heard it on Emily's radio in my office with the weirdest sky outside ever - that was an odd storm.
Anyway, huge win over the billion dollar Dodgers and Clayton Kershaw.
But the Cubs paid with Tsuyoshi Wada and Dexter Fowler both leaving the game with injuries...
Ouch.

PS: This is the first of probably many watercolors of Bryant. I'll get better...

If Kyle Schwarber's only getting a cup of coffee, can it be bottomless, please? 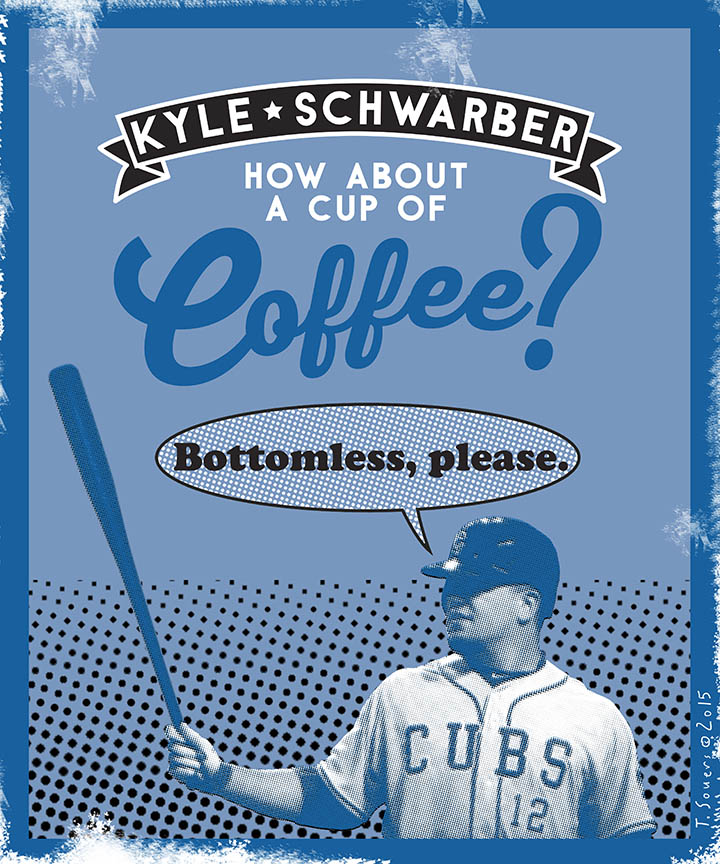 It's so busy I haven't seen but snippets of stuff for a week.
But what I've seen of Kyle Schwarber has been kind of... impressive.
We can believe the hype.
And of course I got to see almost a whole game last night, the sucky game.
I'm not looking for stories on it on purpose because I'm sure he's getting ripped, but the Starlin Castro error that turned into a televised spaz-out in front of the country as he stared into the outfield contemplating his mistake while another run scored was just inexcusable.
He's building a highlight reel of disaster.
Nice to see Anthony Rizzo coming back to life, though.

I'll leave you with the shot I took out the window of the Blackhawks' Parade.
3 titles in 6 years does equal dynasty, and it's going to be painful as we see which guys are let go for salary cap reasons. 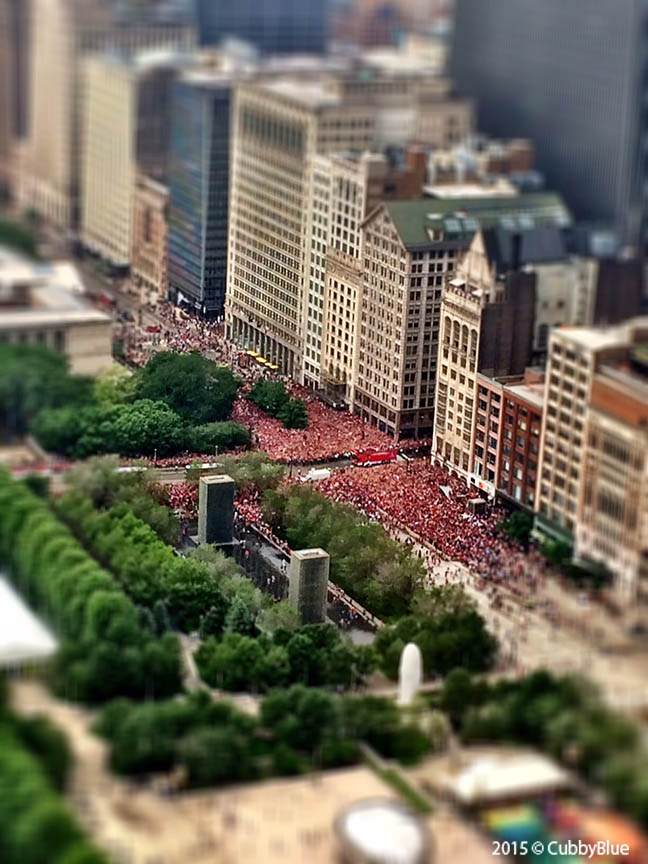 Okay, still SLAMMED.
Sorry for the spotty posting, but can't be helped.