How's your heart after that Blackhawks vs Ducks series?

This Blackhawks vs Ducks series was pretty much 6 straight games of heart attack followed by a nice calm, tidy game 7 where there was never any doubt who was going to win.
The Captain Jonathan Toews sort of saw to that with 2 goals scored in the first period, which could have happened becuase Coach Quenneville threw the Ducks for a loop when he started with Kane and Toews but quickly yanked 'em and then the Ducks had to re-figure which line was gonna play against which.
Whatever, it was a pleasure to watch the 5-3 victory and now the Chicago Blackhawks are in the Stanley Cup finals again.
Think back to Patrick Kane's busted collar bone.
It was over.
What an amazing and strange game this is.
Go Hawks.

Also, if you didn't see the picture that was all over twitter... Joe Maddon had the entire Cubs team put on Blackhawk jerseys and tweet #GO HAWKS GO.

How cool is that and congrats to the Hawks!

And sometime last night winter came back to Chicago.
Yesterday's game was cancelled because of rain and the cold-fronty weather, and today's will be played in super windy conditions and it'll be in the 50s.
Brrrrr.
Go Cubs!

That one stung, didn't it?
The Kansas City Royals come to town with their gaudy 28 wins, hit 3 homers off our stud Jake Arrieta and then late in the game the Cub bats do some hero stuff.
It was 1-4 Royals in the bottom of the 6th when Jorge Soler hit a 2-run homer on a 3-0 count to make it 3-4.
Then bottom 7 Addison Russell ties it up with another homer.
Hey, it's the New Cubs, and they do things like rallies and come from behind wins, so you know... that's in our collective noggins now.
Then in comes Pedro Strop.
Walks Moustakas to lead off the 7th.
Lorenzo Cain with the double, now it's 4-5.
Then an intentional walk for double play possibilities, and Strop then strikes out Salvador Perez.
James Russell relieves Strope and strikes out his guy.
Justin Grimm relieves Russell and then the Fowler error and it's kinda over because next inning will be the Royals' bullpen, and buddy they are good.
So it was no surprise that the Cubs raise the white flag and bring in Edwin Jackson to finish the game.

Yeah there was the error and all that, but Strop... after last year I developed quite a bit of confidence in him and this year he seems like he's just been off.
Maybe a little bit at least.

Joe Maddon: "We can play with these guys." 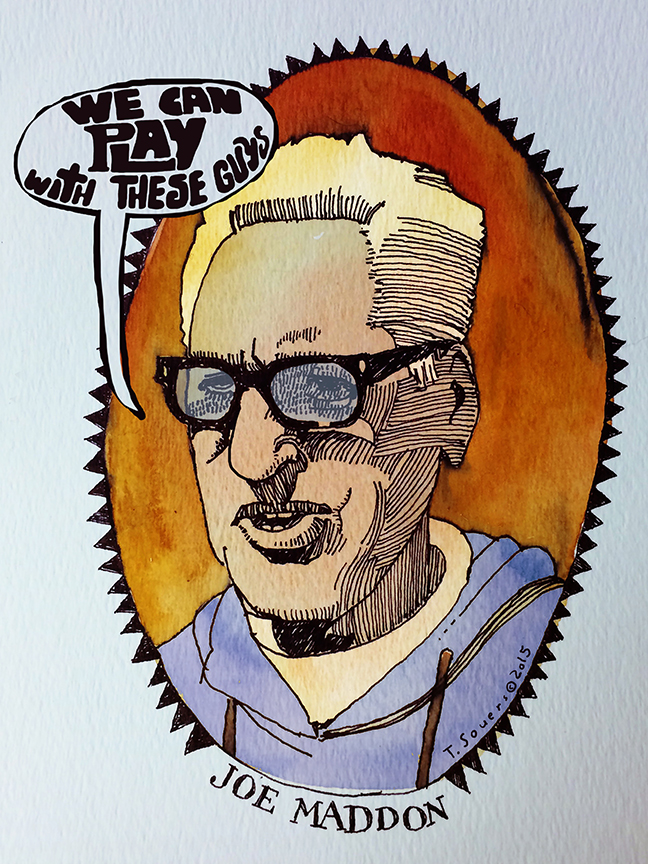 "We can play with these guys" is a statement.
There's no overpromise, yet there's a hint of bravado in there.
And it's not a question that can be answered with "Because the Cubs".

Joe also said this same line after playing the Cards back at the beginning of the month..
So I'm gonna take Joe's quote to mean they can play with anybody.
Which is good because today it's last year's World Series guys, the Kansas City Royals, right here at Wrigley Field.
Followed by Miami (fish, not guys) followed by 4 more vs the guys in Washington, where former Cub guy Reed Johnson made his folklore catch.
So, playing with these guys will be tough coming up.

And meanwhile the Card guys will be playing the Dodger guys 7 times in the next 10 days.
The battle of the first place guys who according to Joe are guys the Cubs can play with too.
Kinda cool.

There's 5 Guys and Guys and Dolls and I used to know a guy named Guy.
One time I had to move offices, and Guy came in my new office and said with a smirk, "Wow, I think this office is just a tad smaller than your last one."
Sometimes guys can be douchebags.
But not in today's story.
Today, guys are baseball players and a plural noun in a Joe Maddon quote.

ps: Last weekend we went to see "Mad Max", which is so spectacular that it's possible I've already seen the best movie of the Summer.
But that wasn't the highlight of the evening.
We did our cheap date night, which starts with wings at Buffalo Wild Wings.
This is a place that sells sports with wings and beer and has maybe, well I've never counted actually but I bet there are 50 TVs in there.
And we walked in and the Cubs were on all the biggest screens, and the people there were all watching.
The Cubs.
Usually, if there's anything else... a soccer match being played in Barcelona, a re-run of something from the NFL, a NASCAR practice race with pickup trucks... that's what will be on the biggest screens.
So, something is really changing with the Cubs.
They even passed the Buffalo Wild Wings test. 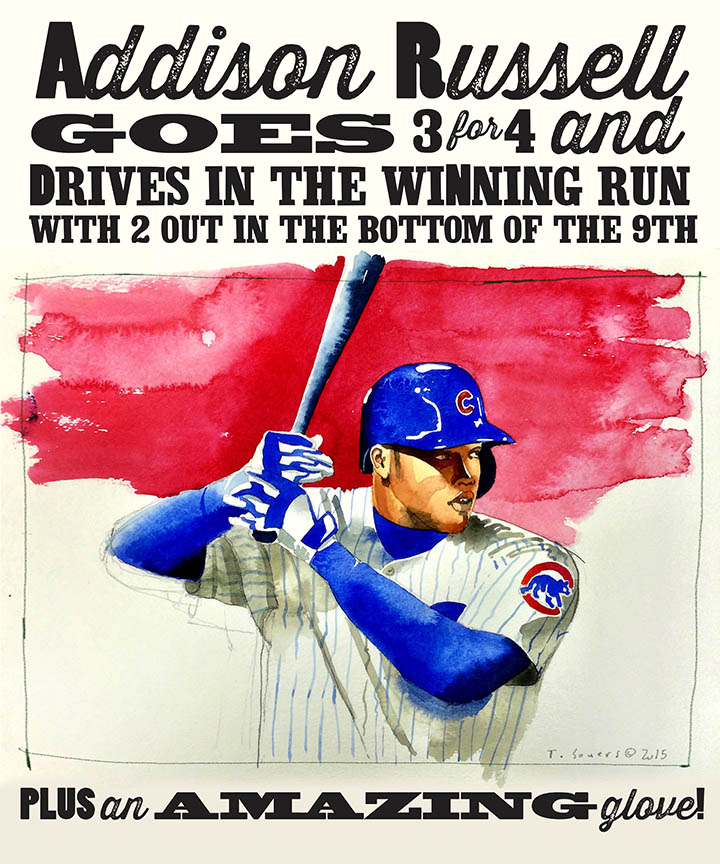 I can't believe I was just doing this watercolor!
The Cubs just beat the Nats 3-2 when Addison Russell hit a game-winning double in the bottom of the 9th with Herrerra on 1st.
This was such a great game - amazing pitching on both sides with Kyle Hendricks giving up 4 hits and 1 run in 7 and Jordan Zimmerman matching that but giving up 6 hits.
The Cubs D was outstanding.
Russell and Castro were both brilliant, Bryant made a bare handed play at 3rd, and speaking of D, Hendricks had a 10 pitch at bat vs Zimmerman that led to a walk (if that ain't great D I don't know what is).
Kris Bryant hit one out that they're still arguing about - did it go over the scoreboard?
He massacred it.
And last but not least, Yunel Escobar was picked off 1st in the 1st, and then, at 2nd base with 2 out in the top of the 9th inexplicably ran to third, Hector Rondon turned around and threw him out.
What a bonehead!
But what a great W for the Cubs.

Jon Lester vs Max Sherzer tomorrow night.
This is such an AWESOME SERIES GO CUBS! 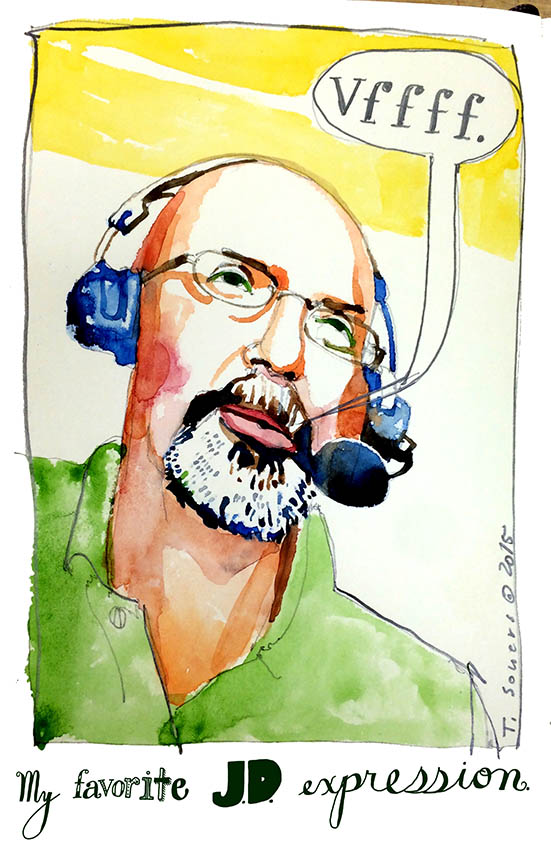 Every announcer has a "signature" announcer thing.
"Chicago Cubs baseball is on the air."
You know who's voice that is - Pat Hughes.
Harry Caray used to call homers, "It might be. It could be. IT IS!"
But in the case of Cubs announcer Jim Deshaies, his thing isn't really a word at all.
It's this weird exhaling sound.
He used to be a pitcher, so when he’s watching the calls on balls and strikes it can get hilarious.
You’ve noticed that Jorge Soler gets hosed almost every game, right?
It’s like he’s such a big man, the umps just... expand his strike zone by 6 inches all the way around.
The pitcher winds up, the ball’s 5 inches outside and the ump calls strike.
“Vvfffff,” says JD.

Not sure I’m spelling that right.
It's never very loud, just a noise you might hear if someone fell asleep in the seat next to you on a plane, and was dreaming about driving a car.
Like a muffled little motor sound.
It varies a little depending on JD’s expectations.
Say an ump has been calling them low the whole game and now it’s like 2-2 in the 7th with maybe Zach Rosscup on the mound, who throws a perfect low ball strike but the ump says ball.
That might be more like, “HUVVVvvvv.”
If you haven't noticed it, next game listen for it.
Balls and strikes especially.
Hilarious.

He and Len have turned into a really great team, just super fun to listen to.
They're smart and insightful and most of all they sound like friends.

Okay, Cubs lose the opener of the Nat series 1-2.
Denard Span opened with a homer off Tsuyoshi Wada, then Ian Desmond hit one back to Wada that he couldn't field and I was already yelling "GO CALM HIM DOWN, ROSS!"
But Wada settled and got the next three out.
Then Kris Bryant comes up and hits the dinger, didn't you think we were gonna watch about 10 homers in the next 8 innings?
Nope.
Wada was really good, and nothing happened again til the 6th when Wilson Ramos hit one out to make it 1-2.
Which is how it ended up.

Wada has already exceeded my expectations, though.
He couldn't have gotten healthy at a better time.

Tonight at 6 it's Kyle Hendricks vs Jordan Zimmerman.
Maybe Kyle can be as good as he was last time out.
Go Cubs!

Too much to do today including watching this awesome game.
Cubs vs Nats.
Can't wait.
Gotta run.
Go Cubs. 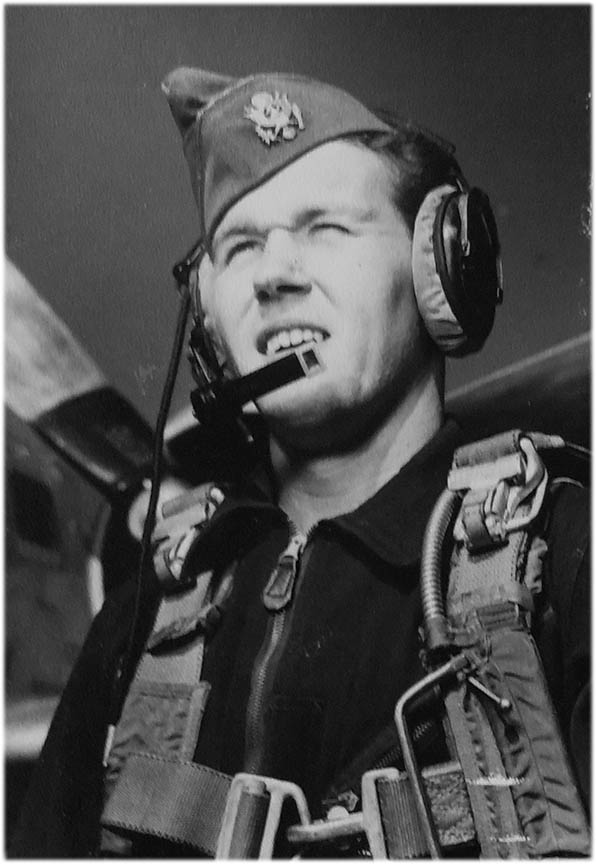 And... Happy Memorial Day to everyone including you, Pop.