My first trip to Wrigley in '15 was also Bryant's. Photos from Wrigley.

Through an absolute freak of nature chance, I totally lucked into getting tix to the game on Friday.
And even though I'm working this weekend... TOTALLY worth trading the afternoon of hooky.
Didn't get there til kinda late, grabbed my first dog of the year with the grilled onions/mustard/hot peppers then a frosty cold one and sat down for a couple innings of heaven.

But you sit down and go... oh yeah, it's all different.

The most obvious weird thing is no bleachers and nobody across the field.
Seriously weird-weird.
Then, there's the Gigantrobotron.
It's weird to look at for about a couple minutes, then it's just there.
Way up on top you can see the massive speakers, and I promise that loud music is by far the one new element you'll have to get used to.
So just do, it's a new day and the faster you embrace it the faster you'll enjoy. 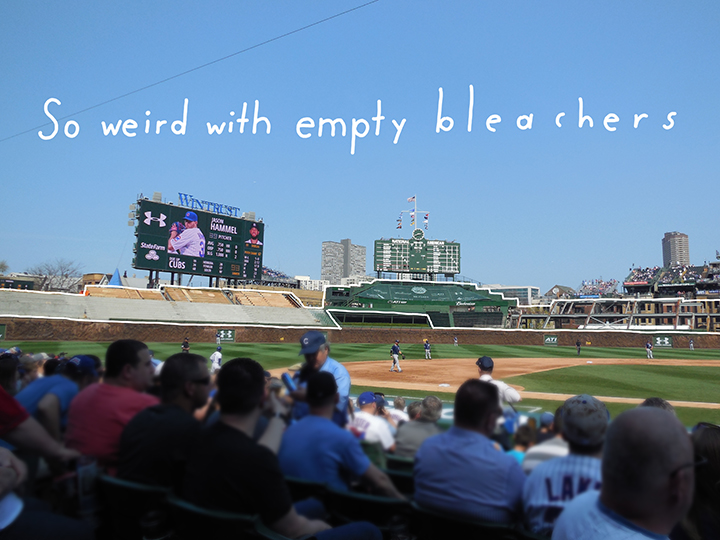 Look, Gigantrobotron even says what pitch was thrown! 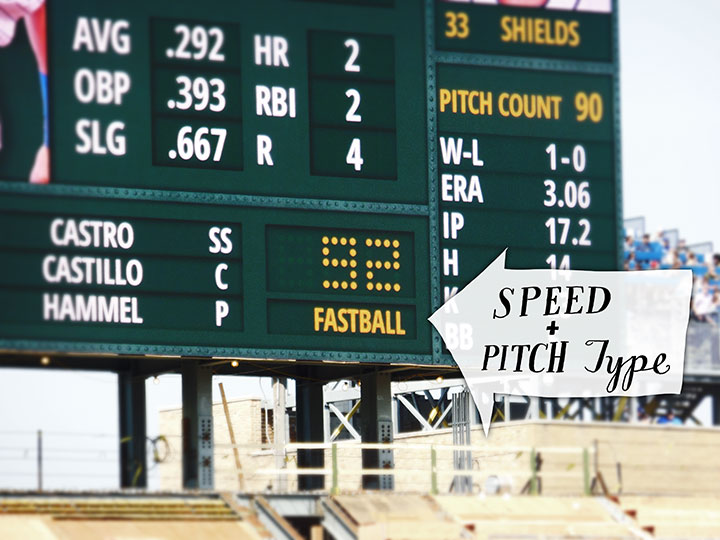 I've heard interviews with baseball announcers and they all say you pretty much just guess what the pitch was, so whatever but kinda cool.
Here was my first glimpse of Bryant. 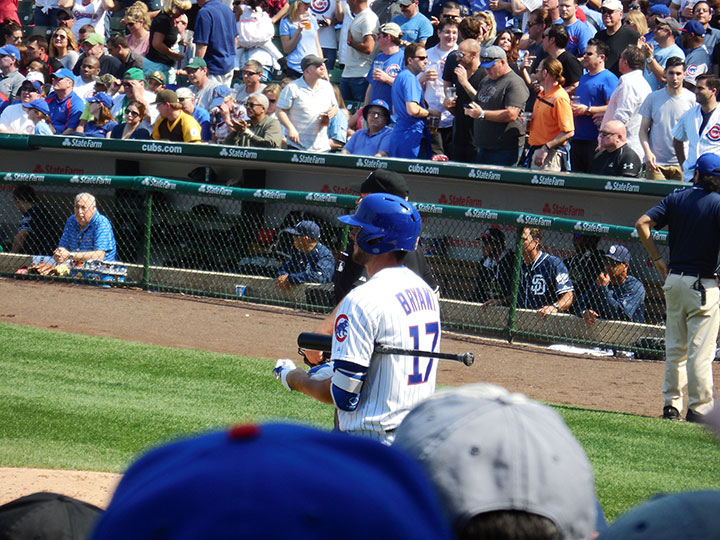 Not surprisingly, he struck out. Not unexpected.

I thought this was cool, though: 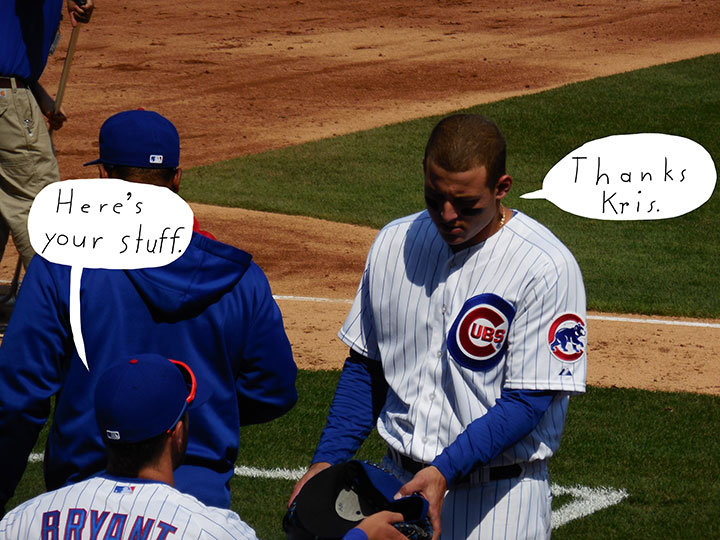 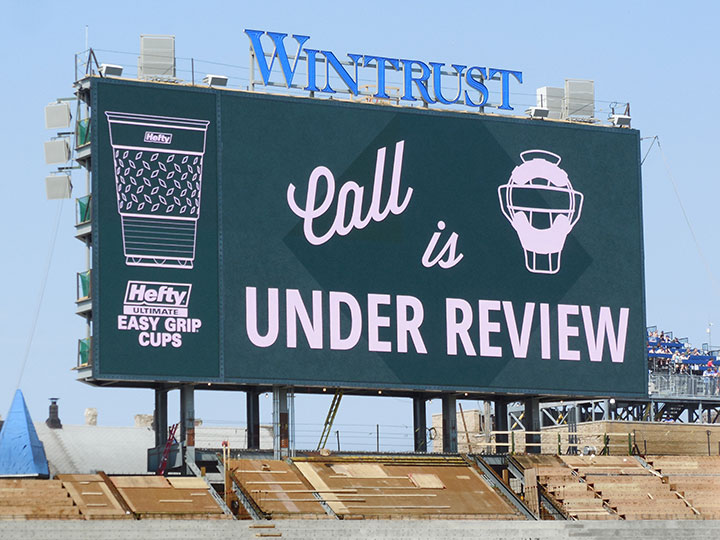 But tell you what, being able to see a replay really, truly adds to the live experience.
And the players look too.
Oh and look at this picture. How much does your heart race seeing these guys waiting to come up... 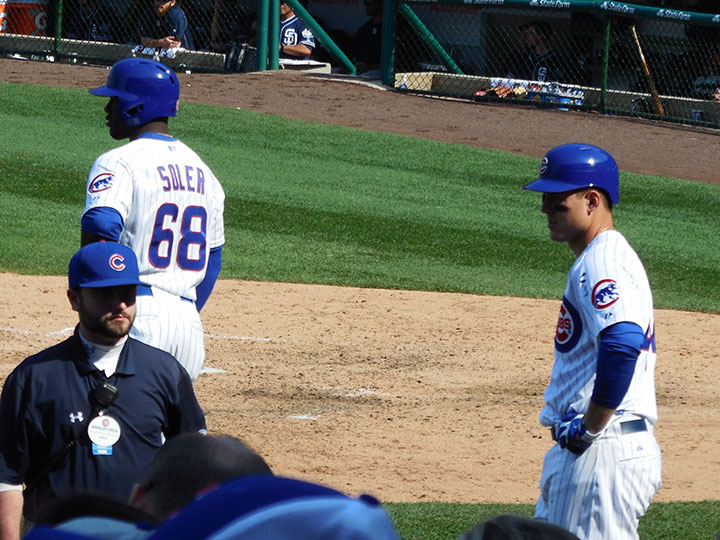 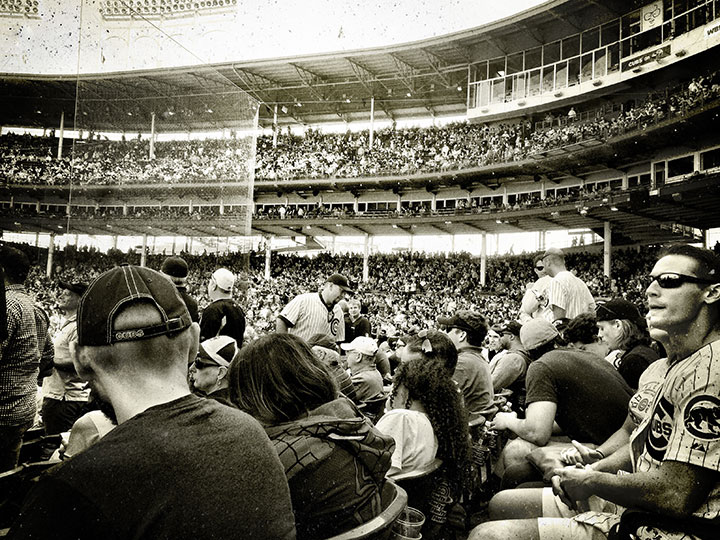 When the ump called a ball on a strike three pitch from Brian Schlitter, and then Seth Meyers hit the next one out - that was really awful. Then you watch Joe Maddon walk out to the mound and you look over and see there's no one in the pen - you kinda know that Joe wants that ump to come have a chat, and he wants that chat to happen right there next to Schlitter so Schlitter can hear every word.
And no it doesn't make up for the ball call, but Schlitter knows who's got his back, right? 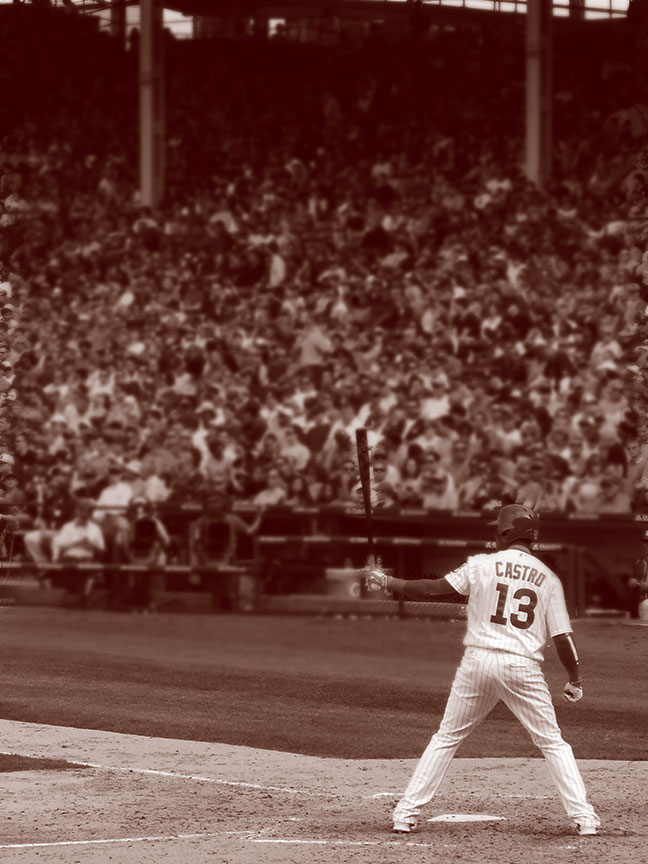 Fowler scores and picks up the bat. 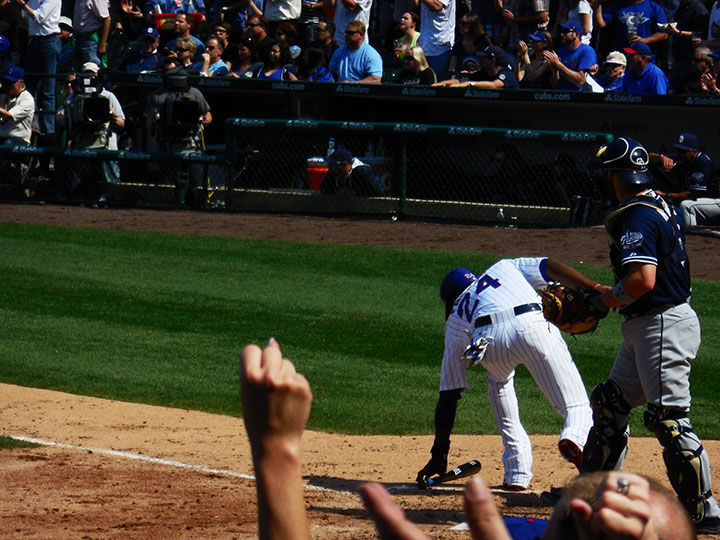 Strop is such a stud. 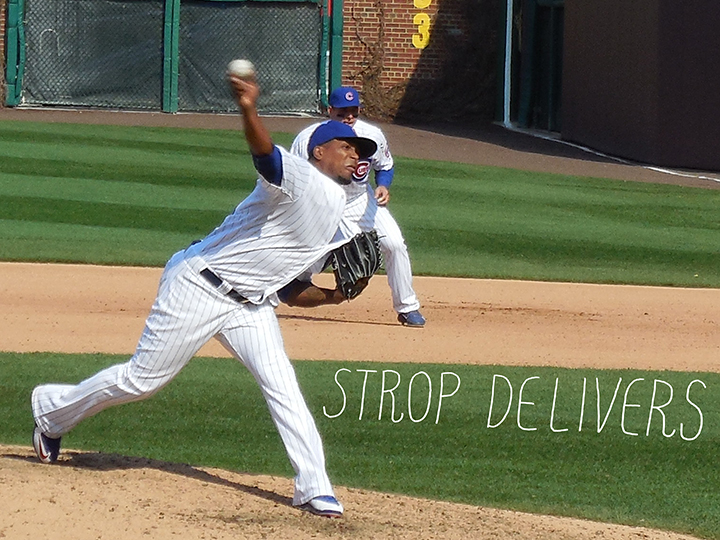 It'll be SO nice when the bathrooms are done because this is really just not good. 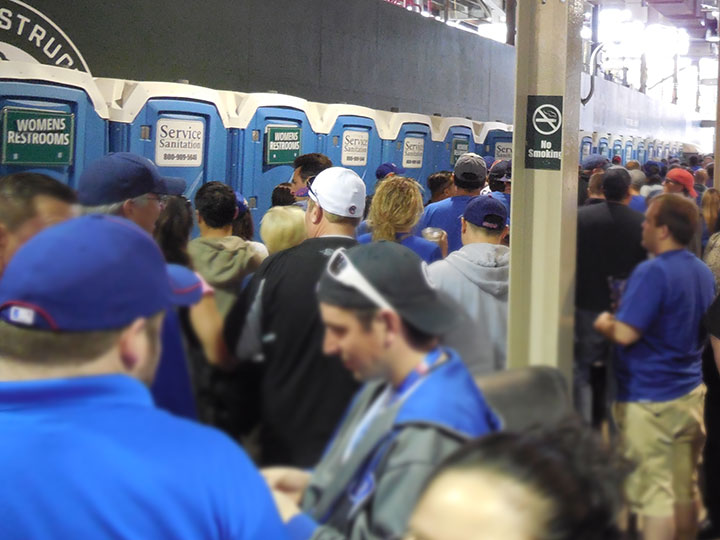 In the top of the 9th, in comes Rondon and first guy he faces hits a weaky grounder to Jonathan Herrera over at 2nd, but the ball goes under Herrera's glove for an error.
The next guy up hits one to Bryant who turns a nice double play and then Rondon strikes out the last guy.
No damage.
As they were walking off, and I just missed the moment with this shot, Rondon went over to Herrera and gave him a little pep talk.
Nice. 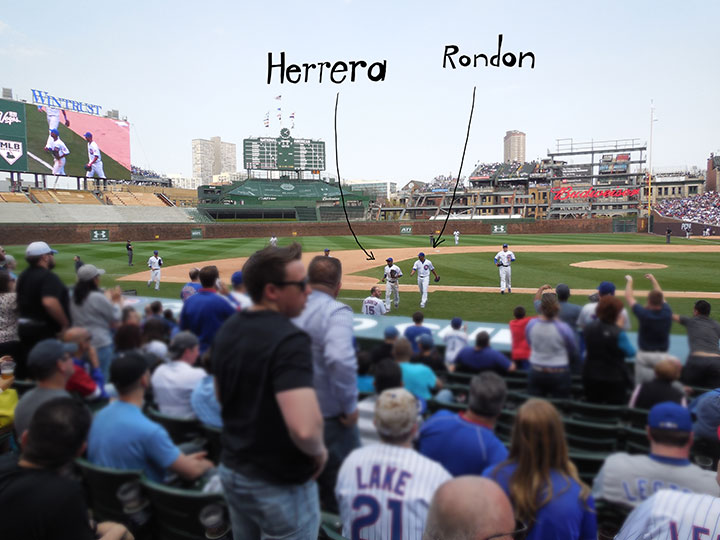 I'll leave you with this shot. 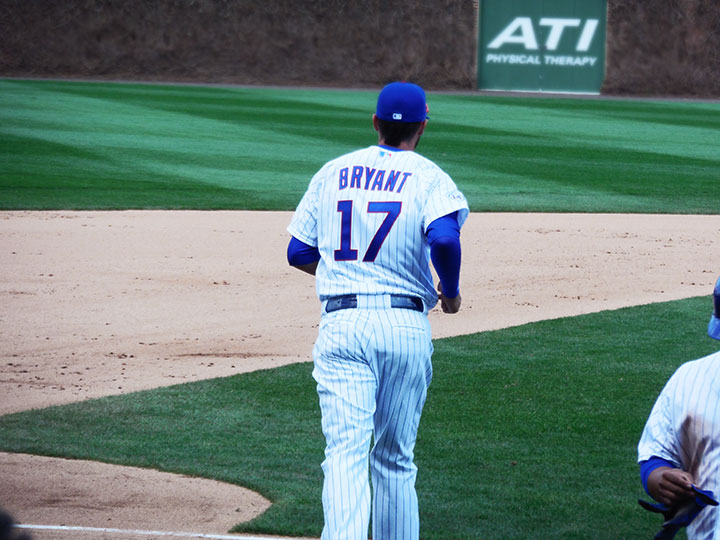 Well, I'm glad Coach Quenneville made the decision to sit Corey Crawford for this next home game vs Nashville.
Darling was just amazing in his last time out, Crawford looks like he needs a day off.
This Blackhawks' home crowd might not be so kind if he went all softie right now, you know?
Q's gotta watch after his goalie's head, and it's the right thing to do.

And if you saw Darling's last performance, you'll know why I did this gif.
Like rubber.
That guy is 6'6" and weighs 190 - it's like he does the splits and I swear his feet go from one post to the other.
That's not a "wing span".
It's a blocked shot and a dejected Predator.

The Friday Kris Bryant Rumor. Is it true? 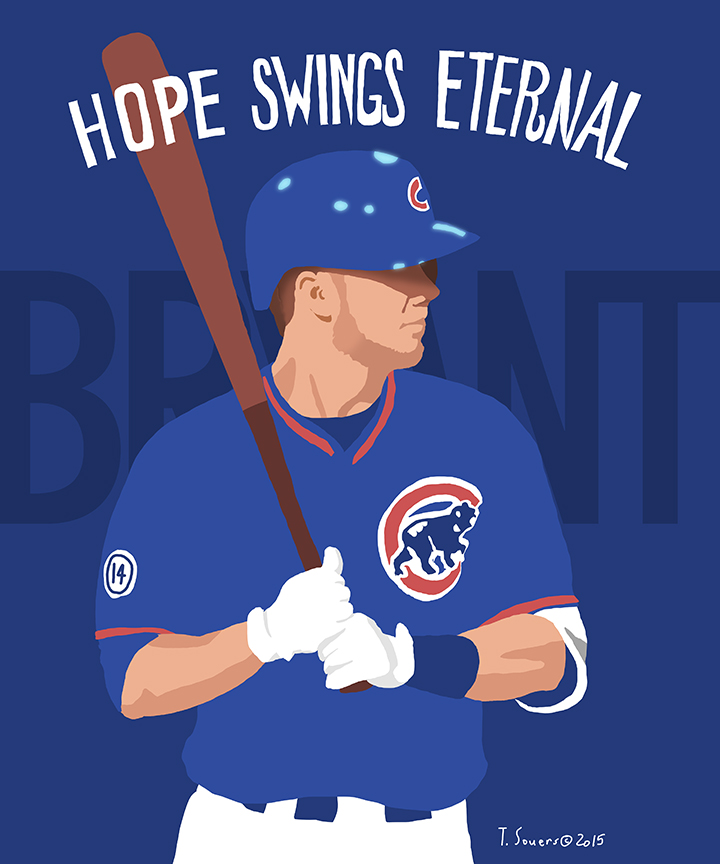 Wow.
Jesse Rogers says Kris Bryant's gonna be playing baseball at Wrigley Field tomorrow.
So that's more than a rumor, I guess.
Mike Olt will go on the DL with a hairline fracture in his wrist.
If you heard the noise that pitch made when it hit him... OH GOD it was so hurl-worthy.
Seriously if that was you or me we would have passed out, the ambulance would have come, then a priest and last rites and dirt gets thrown on us and we'd never get to see the Cubs win it all.
But anyway I'm trying to let this sink in.
Kris Bryant.
At Wrigley Field.
Playing 3rd base for the 1st place Chicago Cubs.
Does anything I just wrote make any sense?
Is that even...

I think I told you this before but whatever.
One time I walked out of Dan Tana's in Hollywood, and there's this little bench out front so people can wait for a cab or their car to get valeted or whatever.
I was with a dinner party of 8, and one of the first ones out.
There on the bench was one of my favorite actors, Harry Dean Stanton (among other things, he was in Cool Hand freaking Luke)! And he's sitting there next to really old porn star Ron Jeremy, who was smoking a joint.
And out of generosity perhaps, Jeremy offered it to the guy next to me who not surprisingly turned it down.

So, yeah... Harry Dean Stanton and Ron Jeremy on a tiny bench in front of Dan Tana's.
WAIT WHAT?

Things happen in life that are real, and yet don't seem real.

Kris Bryant is going to be playing 3rd base for the first place Chicago Cubs.
Tomorrow.

Sure I'm overly giddy and if you're not a Cub Fan and you're reading this you can smirk if you want, but deep down you're one jealous guy because even though this doesn't seem real, it is.
And someday soon the Cubs will come to your town and ruin all your fun.

PS: I don't think I can get in trouble for telling that story because... there were 8 of us and we all saw it.
Also, if you're a long time reader here you might remember this same "headline" for a Derek Lee illustration.
Seems kind of perfect right now though... 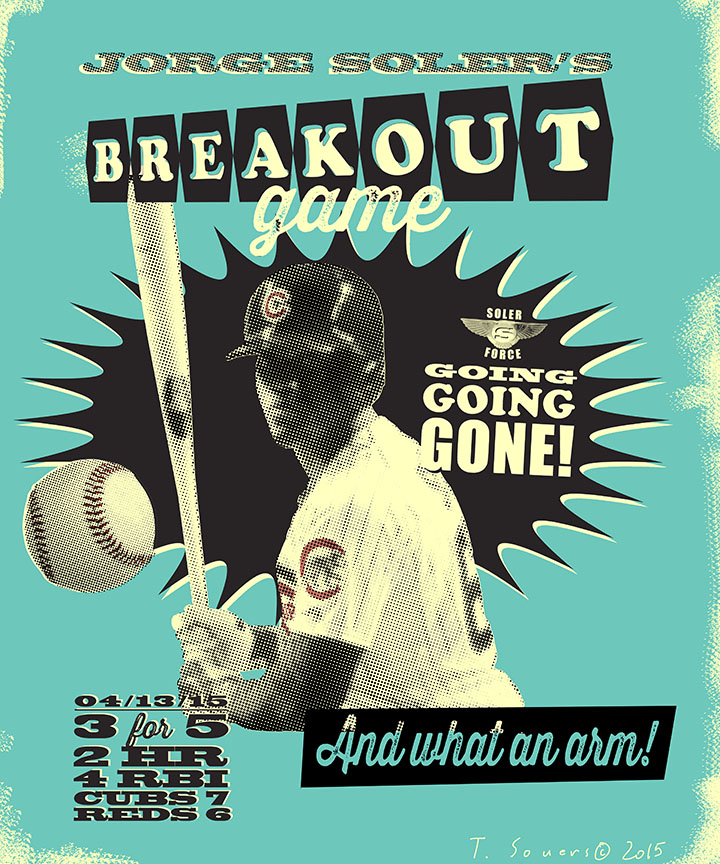 Yeah, you can talk about Jon Lester's weird performance and yippy toss WAY over Anthony Rizzo's head, but the headlines should be about Jorge Soler.
If only this had been a Sunday Night Game on a national broadcast...
Two 2-run homers.
And that yippy toss that went over Rizzo's head was just a neato little opportunity for Soler to show off his cannon.
I can't remember which Red that was, but I promise he'll never run on Soler again.

Chris Coghlan - I think Len said he's never not hit Reds' starter Mike Leake, and last night he got 3 hits off him including a double and a pretty massive homer into the construction.
And... Arismendy Alcantara got his first hit of 2015, knocking in the winning run in the 10th.
Cubs 7 Reds 6.
A come from behinder.
Sweet.

And, Jorge Soler.
In right field for years and years to come.
Goose bumpy?
Me too. A perfect Sunday to just sit and watch a Cubs game - really for me the first time all year from first to last pitch - RUINED by still-sleepy Cub bats.
The Rockies had been trying ALL GAME LONG to give it away with whatever their version of Cubbery is, because they were horrible in the field making errors and dropping foul balls and little bloops falling in between 4-5 guys.
Plus Kyle Hendricks had a rotten 2nd when he gave up the 4 runs that shouldn't really have happened.
The Cubs had one interesting inning of smallish ball where Alcantara led off with a Descalso error, steals second, Kyle Hendricks singles past the pitcher which knocks in Alcantara. Then Hererra bunts safely and Fowler singles and now the bases are loaded with nobody out for Rizzo, Soler, and Coghlan!
This is exactly the scenario you've been dying to see.
Rizzo sacs in Hendricks and then Soler hits a screaming liner that ex Cub DJ LeMahieu catches and easily doubles off Fowler and poof it's all gone.
One run, and the Cubs stay down by 2.
Until the 9th.
When suddenly with one out the Rockies bring in our old friend LaTroy Hawkins.
Alcantara walks and goes to 2nd on a LaTroy wild pitch.
Olt strikes out but whatever, it's still LaTroy pitching and he gets 2 strikes on Fowler right away but then comes the mistake that Fowler hits out of the park.

Joe Maddon says later, "I love when you win that kind of game on the road, utilizing everybody. It's really good for esprit de corps."
Which I thought was a clothing company so I looked it up:
"A feeling of pride, fellowship, and common loyalty shared by the members of a particular group."

While he was certainly talking about the team, I figure it includes you and me, too.

An incredible win early in the season.

Okay, I also have to sell a product.
My buddy Flynn sent me this odd tool from Char Broil called the Live Fire Heavy Duty Chain Basting Brush.
It looks like this.

Okay so that's stupid, right?
But Flynn's from St. Louis and came up to visit - he was at our house Sat night when I made ribs so I got it out.
It's actually GENIUS!
Because of all the surface area on a chain compared to a brush, this thing holds a ton of sauce, it doesn't drip, and the weight of the metal spreads sauce evenly and perfectly over a giant area. 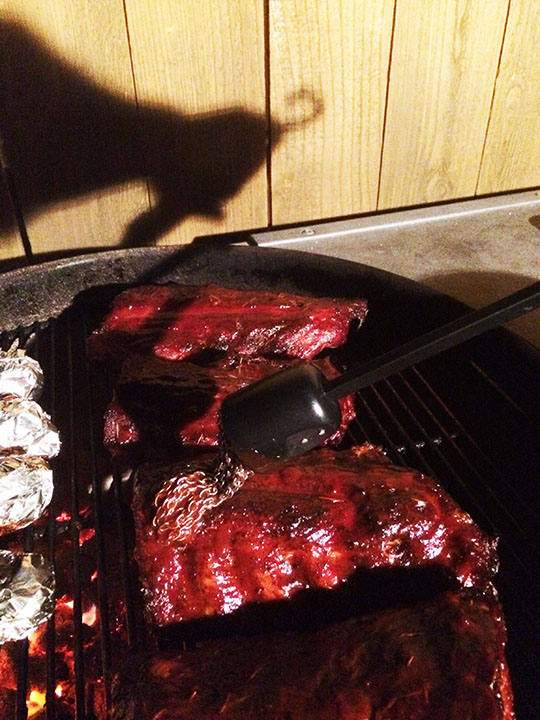 Both Mother's and Father's Day happen soon, and this thing is perfect for either.
GET IT NOW!

As always Matt Groening, if I made you angry with the image of Homer, let me know and I'll take it down. And thank you for your continued brilliance. 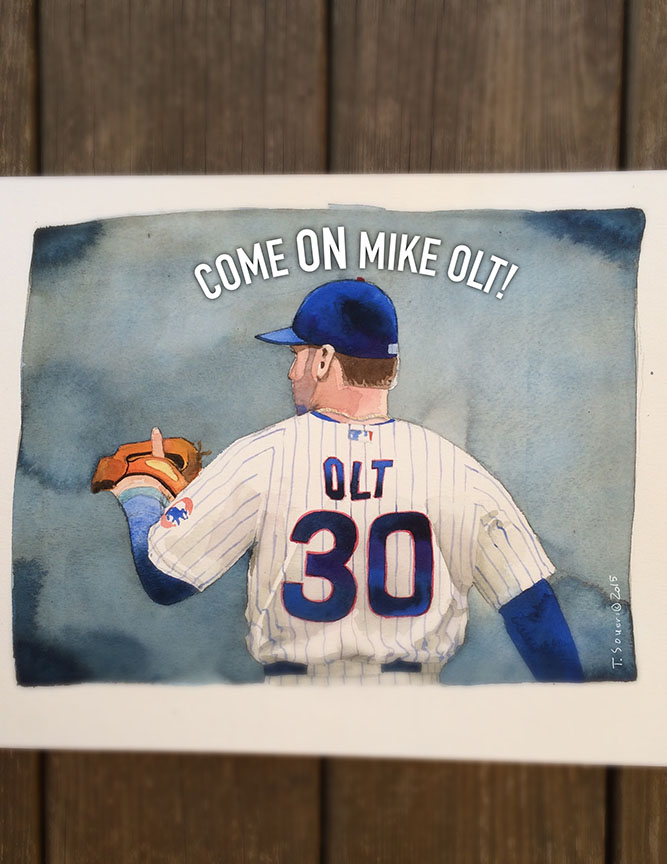 Come ON, Mike Olt.
I'm still so rooting for this guy.
He got a hit in yesterday's loss but also 0 for 2 with runners in scoring position.
Which is pretty much how the rest of the team is hitting so OLT NOW IS YOUR BIG CHANCE DUDE.
Stand out from the crowd.
Look waay up on that slope - see that herd of mountain goats?
HIT ONE OF 'EM!
And go Cubs.

We've got friends coming over, I have ribs smoking on the grill and a variety of frosty cold malted beverages.
Make the night memorable.
And... Go Cubs!