I KNOW it's only April, but the Cubs are nipping at the Cardinals' heels. (gif)

Yeah yeah, it's only April who cares about the standings?
As Joe Maddon has told us millions of times already, there will be losing streaks and ups and downs and yada yada.
I don't care.
It's just plain awesome right now.
Kris Bryant comes up with a couple guys on and takes a walk, I get overjoyed.
Right now the Cubs are 7th in the NL with 16 homers (Dodgers have 28).
But the Cubs are 5th in runs with 82, the best in the Central (Pirates have 79, Cards have 67).
The only time I dove into stats over the last 6 years has been to talk about something awful.
IT'S BEEN FOREVER SINCE WE WERE ABLE TO BE POSITIVE ABOUT STUFF THAT'S ACTUALLY HAPPENING IN THE BIG LEAGUES.
So there.
I'm talking about the standings in April.
As Bud pointed out in comments yesterday, the last 3 years the Cubs have been 5-12 and in last place.
Tonight, should the Cubs win and Cards lose, well then tomorrow we can call them the First Place Chicago Cubs (they'd be tied with the Cards at 12-7 each).
Unfortunately, the Cards are playing the Phillies, and the Phillies are starting a kid named Severino Gonzales in his Big League debut.
This article says this: "Gonzalez has pitched 415 innings in five minor-league seasons and posted a 2.99 ERA with 358 strikeouts and just 67 walks."
Who knows, maybe he'll be great.

The Cubs have Travis Wood vs the Pirates' Jeff Locke who beat the Cubs 5-4 last week.

And... I have a dirty secret I'll share with you.
If profanity offends you, please don't scroll down.
It's a t-shirt I made.
Not for sale, I just... have a different opinion of the goat nowadays.
If you see me wearing a white t-shirt under a layer at Wrigley, this is what it says: 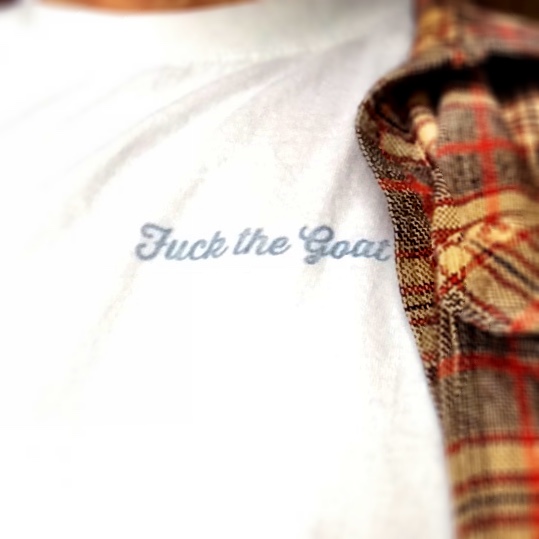 That's kinda scary, thinking about Andrew McCutchen suddenly coming out of his slump in the next couple days.
So far this season, he's only got 11 hits.
Below the Mendoza.
You just do not want to wake that guy up...
It'll be up to Jason Hamel today to keep him quiet.
Sleep, Andrew.
Sleeeeeeeeeeeeepppppp.

Trouble in St. Louis with Adam Wainwright going down with an achilles.
Probably done for the season.
With the Cubs looking like they're for real, you really hate to see that happen.
I'd like our favorite team to be judged on an even playing field, and beating Wainwright would be a good measuring stick.
So, too bad but if history tells us anything there's about 3 more Wainwrights down in their system so...

Lastly, the Reds.
Yesterday's game was just a joy to watch with the Big Inning and young Addison Russell clearing the bases with a massive double.
Jake Arrieta - looked like no hitter time but then he had the couple hiccups innings...and then in the 6th he gets the ground out and strikes out 2.
Concentration?
No biggie though.
Zac Rosscup with the huge Votto K leaving Hamilton stranded at 3rd.
Then Strop and Rondon, kinda automatic.
Cubs 5 Reds 2.
10 Cub wins, 2nd place, pretty sweet.

When it rains, the Cubs' bullpen gets a rest. 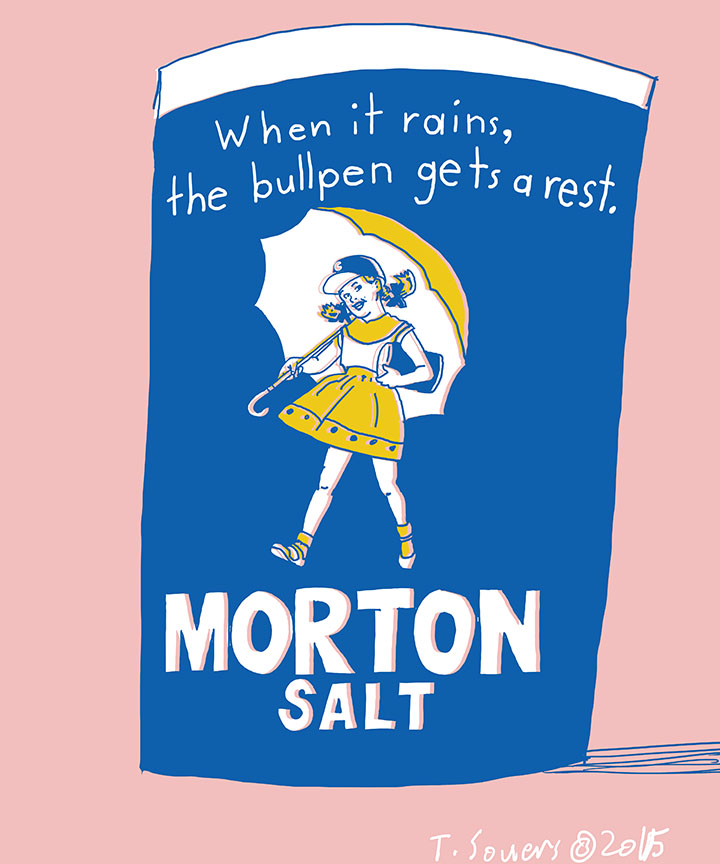 Not so much fun, waiting for the rain to clear yesterday.
Starter Jake Arrieta even tweeted he was pissed.
You can imagine what Reds manager Bryan Price was saying.
But the silver lining is a little rest.
Pedro Strop's got a minor foot thing going on, Neil Ramirez and Justin Grimm are on the 15 day, and in the 16 games the Cubs have played so far the starting pitcher has gone 7 innings only 3 times.
Arrieta twice and Wood once.
6 games have gone six or over, 4 have gone in the fives, and 3 in the threes.
So the pen has been used alot.
Maybe that's just Joe Maddon's style?
I thought pulling Kyle Hendricks last Thursday with one out in the 5th was kind of a quick hook, but I ain't gonna argue with the results so far.
(I didn't compare with all the other teams, maybe that's just the norm early in the season with everybody finding their game and the rotten weather.)
Anyway, just saying a rainout came at an okay time for the bullpen.

But today's supposed to be 61 and sunny in Cincinnati, and it is Arrieta so we'll all get our Cubs fix after the disappointment of yesterday.

And if you watched last night, the Blackhawks put away Nashville, put Crawford back in goal, and all is pretty awesome.

Kris Bryant's Bangs will be the cool new look. 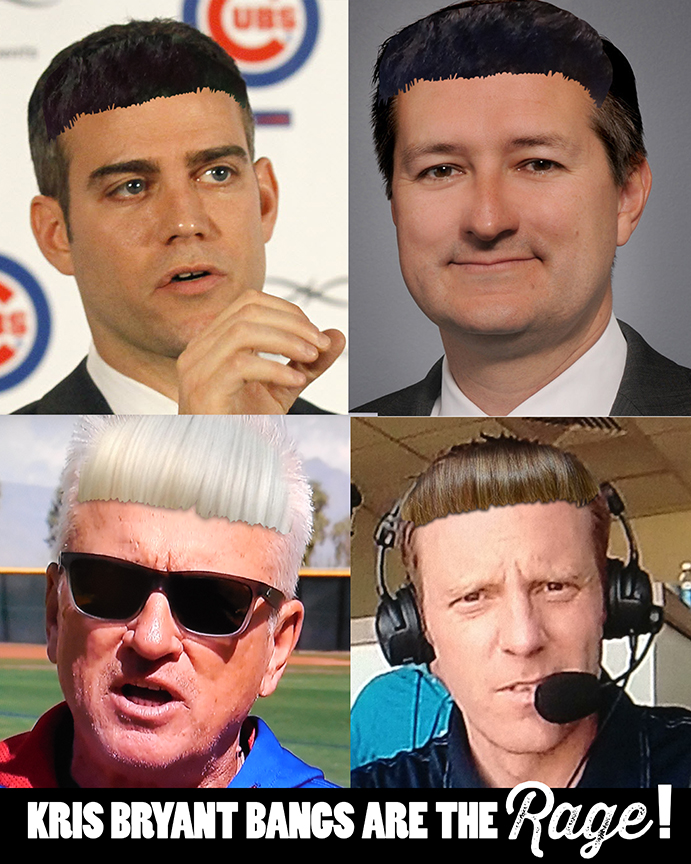 Hi.
What a cheap laugh, but whatever - you can't stop talking about Kris Byrant.
Had to work late last night so I missed everything, but caught the last couple at bats on the car radio driving home and you know what?
Bryant has played all of 6 games in the bigs, and already he's like... expected to produce.
With the Cubs down a run in the top of the 9th, Denorfia and Soler both ground out.
Rizzo hits a single.
And then... it's just DIFFERENT now.
Bryant steps to the plate.
Listening, I just thought - well there's a million thoughts, right?
How in the how did this happen less than a month ago they were just a pile of promise It would be impossible if he knocks in the tying run but he might which is unlike how I've allowed myself to think for years who cares if he's got two strikes it is completely in the realm of possibility that he'll hit one out and the Cubs could take the lead hey I should pay attention to driving but Pat Hughes sounds like he thinks the same thing I'm thinking and then strike three and it's over but... it's just DIFFERENT now.

I saw an article in the St. Louis Post Dispatch yesterday.
Read it and tell me the Cubs aren't real even in the eyes of the Cardinals.

I'm trying to wrap my head around that.
Watching the Cubs is fun again.
Weird.

Ball's-Eye view of Castro's chopper over Harrison to tie it in the 9th! 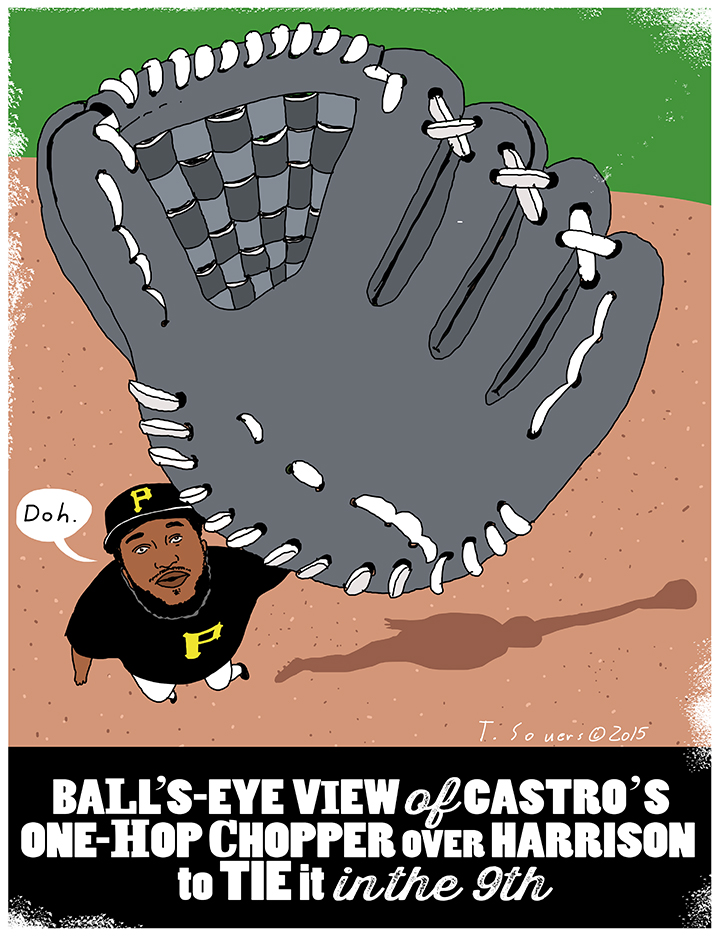 Wish I had time to write something up.
Cubs win it in the 9th with a 3 run rally starring Rizzo (single), Soler (double), Bryant (walk!) and... Starlin Castro (2-run single)!
Then Welington Castillo knocked in the winner.
Cubs 9 Pirates 8.
Amazing game.
Addison Russell's first game he goes ofer, but I think we'll keep him.
This team is just non-stop, must-watch, and super-fun.
Hawks win too!

Addison Russell takes the el to 2nd base at PNC tonight. 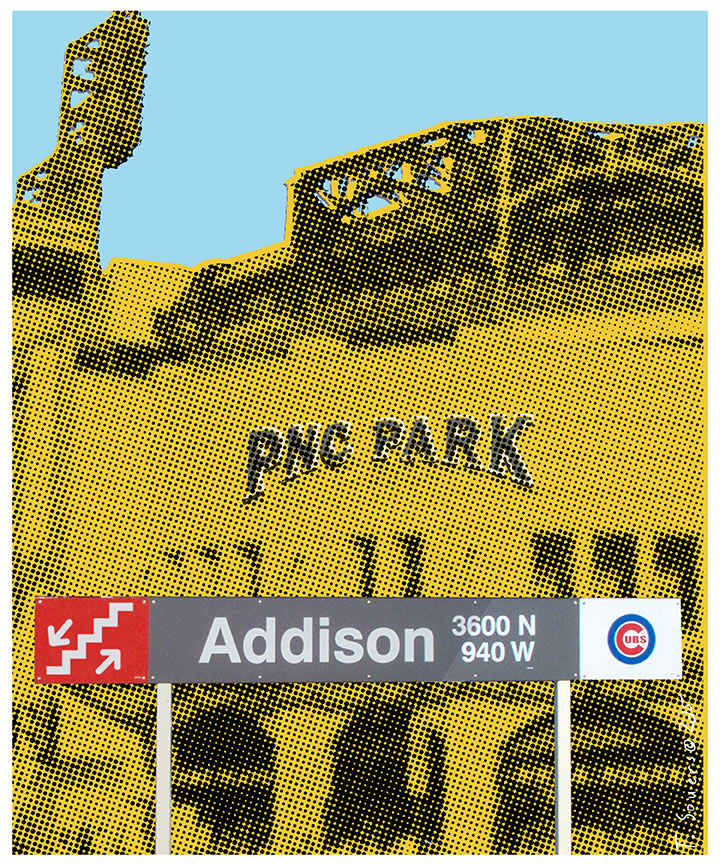 My head is literally spinning from all the crazy stories revolving around the Cubs.
It turns out that John Lester has the "flips" - NOT the yips.
Surely you saw the ball get stuck in the fingers of his glove and then toss the whole thing to Anthony Rizzo, who looked like he was fielding a water balloon.
Then last night... Kris Bryant can apparently do any damn thing he pleases.
He turned on a hundred MPH fastball off Pirate reliever Arquimedes Caminero with Soler and Rizzo on base.
Smackaroo.
A double, he knocks 'em in.
But then like the Keystone Cops, Pittsburgh threw the ball around trying to get Rizzo at home, then all over the place trying to get Bryant who just... kept... going.
Til he scored.

It was immediately labeled a "little league home run".

Crazy stuff.
Can not stop watching this team.

Jake Arrieta started out bad but settled down and went 7 innings with 7 SO, 4 hits and only one measly run.
God like, really.
The Cubs had 14 hits - Soler with 4, Bryant with 3, and Rizzo with 2.

AND THEN... I woke up this morning with a message on my phone saying the Cubs were calling up Addison Russell.
I figured Alcantara was - at the game I went to last Friday he pinch hit vs. Craig Kimbrel who started with a fastball and then threw two curves (I think), and Alcantara never got in a swing.
It was horrible.
But I saw Chris Coghlan look like that at the beginning of last season too, so maybe Arismendy can figure it out in Iowa.
Very excited about Russell, though.

Amazing stuff.
I'll try to keep up, but man it's NUTS!
And more fun than forever.