How will things shake out for the Cubs? 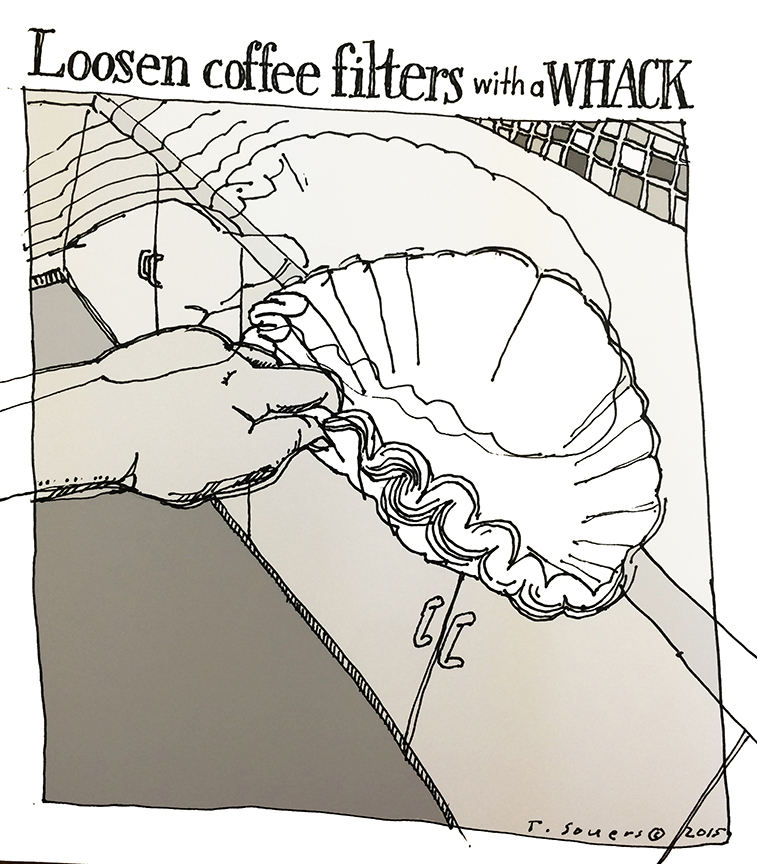 I worked in restaurants for 8 years.
Probably made maybe... thousands of pots of coffee?
A busboy showed me this trick one time.
You know how you get a stack of coffee filters and they're all stuck together and it's a giant pain to peel one out at a time?
Then when you finally get one out, you realize you bent it but you put it in there anyway and load up the coffee and then while brewing the water knocks down the side you bent and then some coffee grounds leak out and BLOCK THE LITTLE HOLE AND NOW LOOK. COFFEE ALL OVER THE COUNTER!

Here's the solution.
Take the whole, brand new stack and whack it on the side of the counter first.
I knocks all of them apart and now they're easy to separate.

Kinda like what's happening right now in AZ.
All these players got knocked against the counter and they're becoming easier to separate.
This is kinda cruel to say, but Javier Baez is probably separating himself to Iowa.
Sure there's a school of thought (pointed out by Jesse Rogers) that he should "figure it out" in the Bigs, but I think the pressure will make it worse.
He should go down and continue to work on that swing in the semi-privacy of the minors.
As Rogers says, the Cubs really are a work in progress, but I don't know a single Cub Fan who doesn't have high hopes for this season, and striking out again and again this year will bring out boos that Baez just doesn't need to hear.
Welington Castillo on the other hand could not be doing himself a bigger favor than what he's doing.
Yeah, he's got the bad pitch framing stain, but .333/.417/.571 with a couple doubles and a homer looks great, plus his arm has been awesome.
Probably not a Cub, but playing well right now should make it easy for someone in need of catching help to pay the Cubs something worthwhile. That's good for everybody. (I don't buy the 3-catcher scenario)
The outfield's got Soler and Fowler and Coghlan locked, right?
Alcantara is Mr. Versatility.
So what about Sweeney and Lake and Szczur and Denorfia?
Might be four filters stuck together and they need another whack.
And it's about time to draw the king of the hill illustration.
It's so interesting this year with all the "5th starters" around.

Who knows what the hell's gonna happen with the infield.
Bryant?
No Bryant for a couple weeks?
Olt backing up 3rd and 1st? LaStella or Alcantara at 2nd or 3rd?
Addison Russell is a freakshow of talent but he's only 21 and inexperienced and yet Starlin Castro was younger (only 20) when he was called up in early May of 2010.
Head spinning crazy stuff going on there.

Anyway, hope you try the coffee filter smack next time you get a new stack.

Every (Cubs) party has a pooper. Hey! Scott Boras is here! 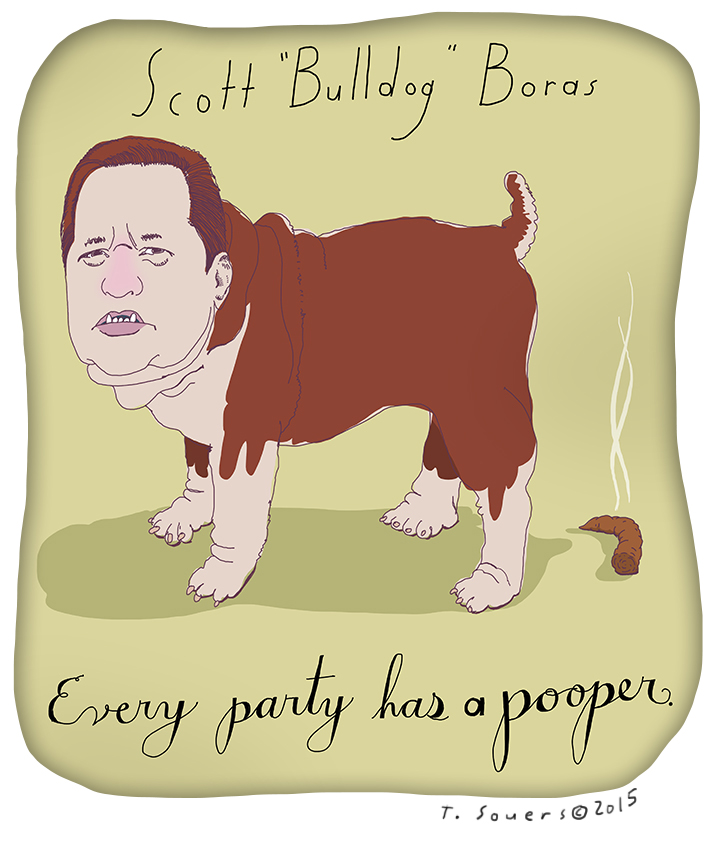 You cannot deny the joy in the air.
Baseball is here, and the Cubs are at the very beginning of what we all hope will be a multi-year magical journey of baseball bliss.
It's a party alright.
With new guests arriving who can throw and catch and run and hit.
There's so much to hope for, to watch and wonder about, and then this has to become the big story.
You've all read it.

Kris Bryant.
Service time.
If the Cubs keep him off the team for about 2 weeks after the season begins, then he can't become a free agent until after the 2021 season, a year later than he would if he was in the lineup against the Cardinals on April 5th.
It's another year of Cub Control, and another year for Bryant to wait for an enormous payday.
Did I say payday?
Yes.
Which brings us to...
Scott Boras in the news (at the news' request apparently), barking loudly.
Bryant said that it's nice to have a bulldog in his corner as opposed to a poodle, pissing off millions of poodle owners and inspiring today's drawing.
EDIT: Read this from the Boston Globe's Tony Massarotti (Thanks Murph!)

I don't want to beat this to death.
I want this to be resolved so I can go back to the party.
Both sides are right, and like Joe Maddon says: this is just Boras being Boras, which we should all expect.

But I did like Chris Coghlan's homer, Arismendy Alcantara's triple, and 2 hits from Soler/LaStella/Ross/Almora in the Cubs' 7-5 W over the Dodgers yesterday. Plus in between meetings I got to turn on my phone's At Bat video and catch my first sighting of C.J. Edwards. Can you believe how skinny that guy is? His legs looked like about 3/4 of his body. He went 2 full innings and gave up 2 hits. Looked pretty good.
But dude... EAT SOMETHING.

The Leprechaun in the alley next to Wrigley and his pot-o-gold garage. 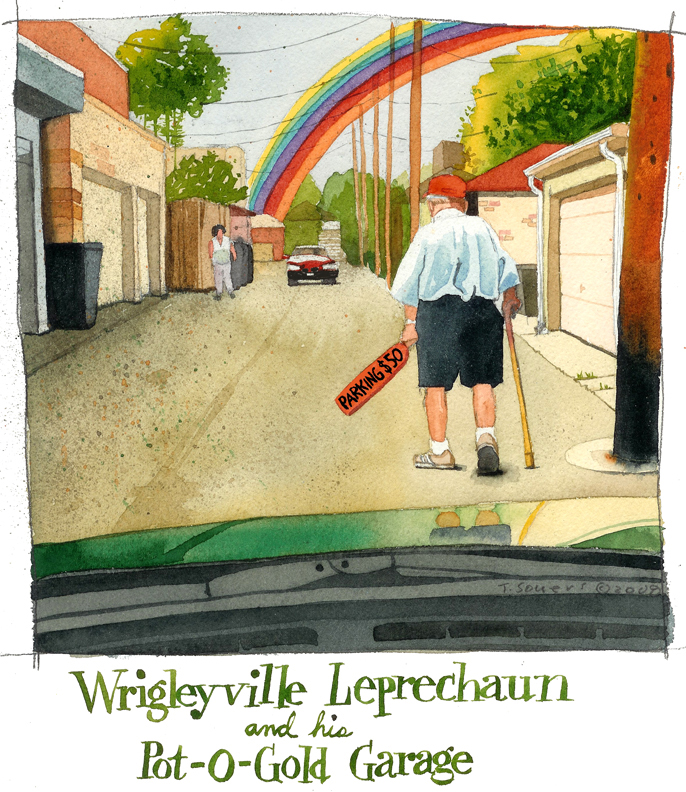 If you've ever parked in the alleys around Wrigley, you'll know exactly what this is about.
It means you have a lack of foresight and common sense, and are ignorant in the ways of public transportation.
Of course, that would include me.
Almost every game I drive to, I park in the same alley - the one off Waveland closest to Bernie's.
The little Old Timer in the painting - he's always standing there with his charming little sign made out of a wooden breadboard.
Just a nice little old guy, right?
Well, no.
He's a Leprechaun.
Little thief has been taking my money for years.
_____________

Happy St. Patrick's Day!
I was gonna do a post on good luck.
4 leaf clovers and things like that.
When I'm at Wrigley and I get a triple peanut... for some reason that's good luck.
I mean, it's not really a thing, right?
Well, maybe it is just based on how rare a triple peanut is, like the lucky 4-leaf clover. 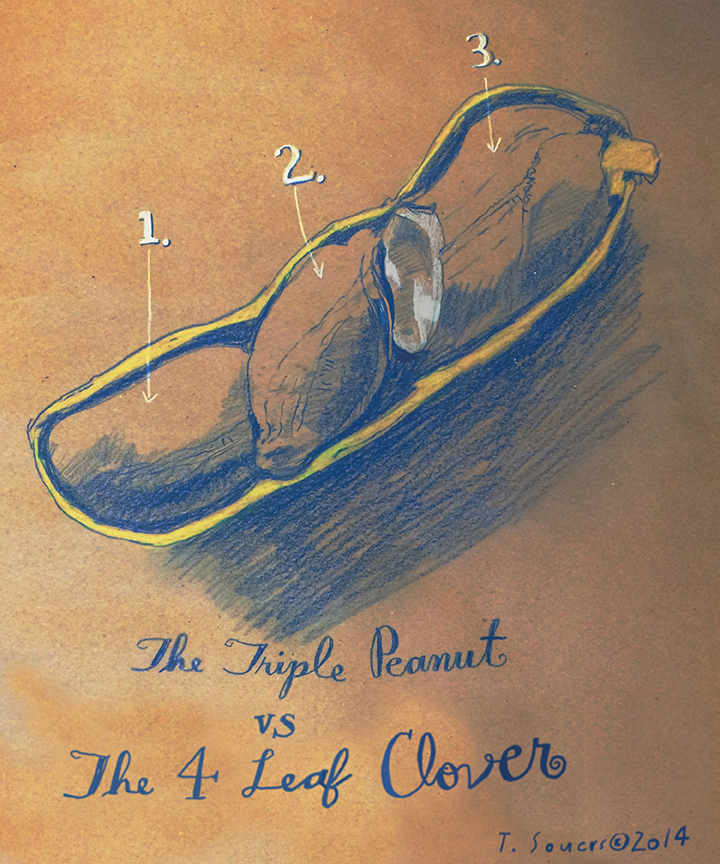 I can't think of anything famous, but it seems like when I get a triple peanut at Wrigley, something good happens.
A homer...
A double play...
Edwin Jackson gets pulled...
Something.
Anyway, I'm walking thru the Jewel yesterday looking for the 2015 Sierra Nevada Beer Camp Beer (more on that below), when I see a giant stack of bags of peanuts in the shell.
My baseball Spider Sense tingled.
Had to... have them...
I lbrought 'em to the office, and when I opened the bag and reached my hand in I pulled out a triple peanut (that's the one in the drawing).
So... nothing lucky happened right then, but maybe it did and I just don't know it yet.
Maybe it just means that 2015 will be a magical season.
That's the beauty of luck.

Okay, Beer Camp.
Doesn't that just sound kind of perfect?
Here's what I was told.
Last year, Sierra Nevada collaborated with a bunch of other brewers at a "camp" and made 12 packs of the result. I didn't get one but I think there were different types of beer in each 12.
This year, it looks like they're inviting the public because there's a contest (see it here), and they already have 12 packs of an inCREDible "Hoppy Lager".
Here's what somebody said at Beer Advocate: "Man, I LOVE this beer. The wonderful bitterness of hops, sweet malts, and a crisp lager finish. Easy drinking, smooth, balanced. Floral and citrus with sweet, light malt. Beautiful golden color with a nice big thick white head. Not as heavy as a 7% IPA would be, and is really refreshing."
So to paraphrase: Man, I LOVE this beer.
If you feel like it, you could probably drop some green food dye in it.
Or not. 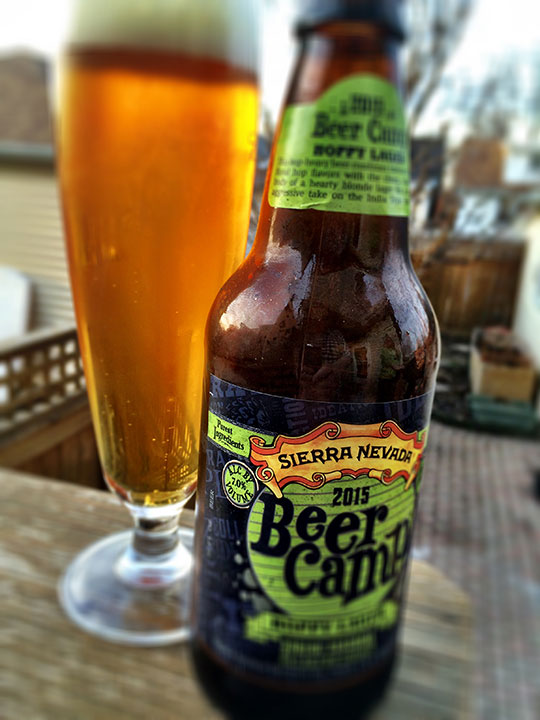 Okay, I don't have time to compare EVERY team but you get the point.
Kris Bryant is having kind of a monster spring and leads all baseball in homers with 6 so far.
That's more than the Sox or the Marlins, and only 1 less than the Cardinals.
2 of Bryant's came yesterday, when he was supposed to rest a shoulder or something.
He's an attention magnet.
He's a potential masher for years and years.
He's a Cub.

Will Ferrel will play for the Cubs today. (baseball card) 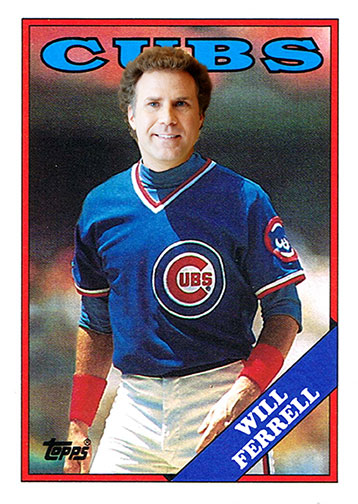 Last year I'd have been alot more excited about this.
You know, we were all looking for fun and this would have been perfect.
Today Will Ferrell will suit up for a bunch of teams and the good news is he's doing it to raise awareness for cancer and we'll all get a good laugh at the HBO film later.
So good job, Will!

Yada yada.
Jon Lester looked amazing yesterday in the Cubs first win of the Spring, a 4-3 win over the Dodgers.
Remember when Matt Garza came to the Cubs and we were all WOO HOO WE GOT GARZA!?
Then Spring Training started and he wasn't that good and all he could talk about was the dry AZ weather wrecked his breaking stuff and right away you were thinking "uh oh".
That doesn't seem to be happening to Lester.
He struck out Jimmy Rollins leading off with a fabulous curve.

You saw the Joe Maddon vented a bit about the lack of fundamentals?
There was some nice D yesterday too, including Mike Olt's barehanded pickup and toss to Anthony Rizzo that nailed Chris Heisey.
But if you see the play (go to the GameDay box score and click on the "video" box at the top right), Olt's throw was to Rizzo's left. Watch him effortlessly float across the bag to catch the throw.
Gorgeous.

This is TOTALLY a trick gif.
You have to guess what it's about.
Hmmm hmmm, giving you time to think - it's a toughie.
Okay okay, here's a hint:
SOMEthing (or I should say THREE things) happened in yesterday's game against Cleveland that made a guy in the hallway here say,"Whoa, it's Murderer's Row for 15 years."
Here's another hint:
What rhymes with "whack to whack to whack snacks"?

Okay, enough with the stupid part of the post.
Although stupid?
When Jorge Soler, Javier Baez and Kris Bryant hit consecutive homers off an actual Big League pitcher, I became absolutely, without-a-doubtly, giddily stupid with joy for the rest of the day.

I mean, the odds are that out of all these hot shot prospects, maaaybe a couple will actually turn out to be bonafide Major League ballplayers. Maaaybe a couple All-Stars.
BUT...
I cannot ever remember being so excited about the future.
Ever.
So much fun being a Cub Fan right now.