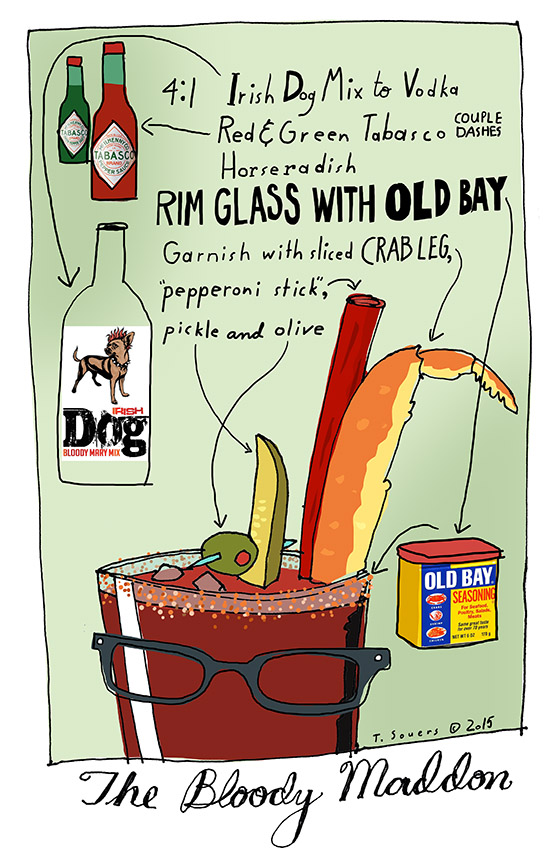 I was working a tad late when I got a text that Joe Maddon was being interviewed on ESPN.
Emily's radio was out of batteries, so I had to wind up the emergency radio with the crank.
I missed most of it, but right at the end of the Waddle and Silvy interview, Maddon shared his Bloody Mary recipe.
You know I'm a fan the bloody.
He's a Florida guy, obviously.
Garnish with a sliced Alaskan king crab leg?
Actually, that sounds kind of awesome.
A "pepperoni stick" - that's a Slim Jim, right?
I'd also never heard of Irish Dog Bloody Mary mix, but there it is online and "Bottled by Steve and Kelly Ducey of Moline, IL."
But the biggest deal Maddon made was about taking a lime or lemon and running around the rim of your glass and dipping that in Old Bay Seasoning.
THAT'S what makes it special, I guess.
So... if you make this drink, remember that's your first step.
Might have to try that this weekend and compare it with John Souers' Bloody, which has never been beaten (at least to me).

Okay MIKE OLT hit his third homer last night, which ties him with Mike Trout (and Matt Szczur)!
Kris Bryant made his first start in left, which I hope they keep doing.
Travis Wood pinch hit a homer, which combined with his pitching sure seems to make him more valuable than a guy who can't find the ballpark.
And Jon Lester pitched, just not in this game so you couldn't see but apparently 54 pitches and he's all good.

Hey, don't sell not finding the park short. Jackson should always get lost on the way to the park. At least his stats wouldn't get any worse.

Immediately after I read this story I tried to replicate Jackson's verbatim claim: “I actually put it in Google Maps and typed in ‘Oakland Athletics spring training complex' and it took me to the old one" (Phoenix Municipal Stadium).

Guess what? Google maps directed me to Hohokam.

I think you trapped him, but you know... it's google.
They probably had that fixed within 3 minutes of the story getting out there.
In fact, they probably already read your comment since it has "google" in it.
They're watching us even as we type, Bud.
They know EVERYTHING.