This came from Carrie Muskat's blog.
Joe Maddon flew down to Puerto Rico to watch Javier Baez play.
But it also sounds like he wants to try to start pulling the pressure monkey off Baez' back.
"Hit a couple singles and, above all, I want to see you smile."
That's a pretty nice introduction, given all the angst around Baez and his strikeouts.
I did a painting awhile back from a game I remembered last season, when Baez hit a ball so hard that all Aramis Ramirez could do was sort of fall backwards and blink. 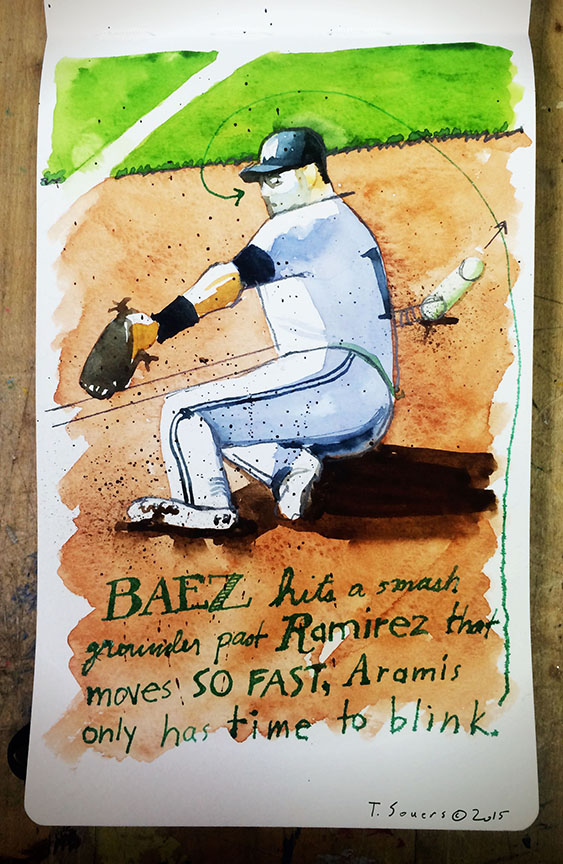 That hit sure made me smile.
Anyway, Joe Maddon.
He's out there earning trust, just like he said he would, and if Muskat's little story is any indication of how he'll go about it, I think he'll be successful.
Baez is one of the reasons we think Joe Maddon was the perfect choice for manager, and it'll be nice to watch this play out, how he handles the kid.

Okay, I'm still on this trip and there are days and days to go and I may not get to put anything back up for awhile.
It's really busy, it's work and while I can't talk about it now I'll be able to in awhile.
Like, it's been so busy that I only now found out there's a big storm in NY.
Lastly, sorry I didn't have something to put up for Ernie.
It's too awkward of a time to do it now, so some time in the future we can do that.
What a giant figure in the history of the Cubs, Baseball, and all of sports.
And what a nice man.

Remember a year ago, when nothing at all happened at Baseball's Winter Meetings?

Remember how nothing much seemed to happen in baseball last Winter?
What a difference this year, and there's still more action to come.
Because... isn't there like a couple years left til the Spring of '15?
Sure seems that way.
I cannot wait for baseball.

Hey wait!
The Super Bowl is coming up!
It's the Patriots and the Seahawks and Brady and Wilson and footballs missing air and um, man...
I won't mind watching but really on the scale of things that are interesting I'd rate it about a... grilled cheese.
What I'd like to see is some Kris Bryant at bats.
I'd like to see CJ Edwards throw.
Same stuff as you.

Anyway, it's a travel time.
If you don't hear from me, I promise I'll have something to talk about when I get back.
I just got shots for yellow fever, hepatitis a/b, typhoid fever and a pocket full of malaria pills.
Talk soon.

Go Cubs.
ps: at every Cubs Convention, there's always some angry old guy who steps up to the mic and yells for awhile.
Every convention.
This last one happened when Joe Maddon was taking questions: 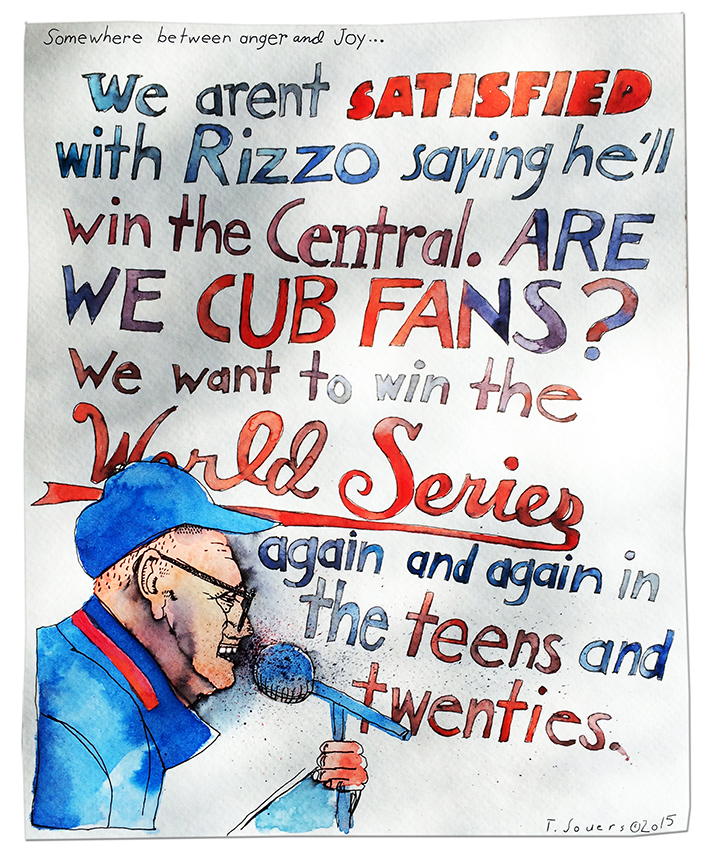 Joe Maddon. At least his hair can't get any whiter. Can it? 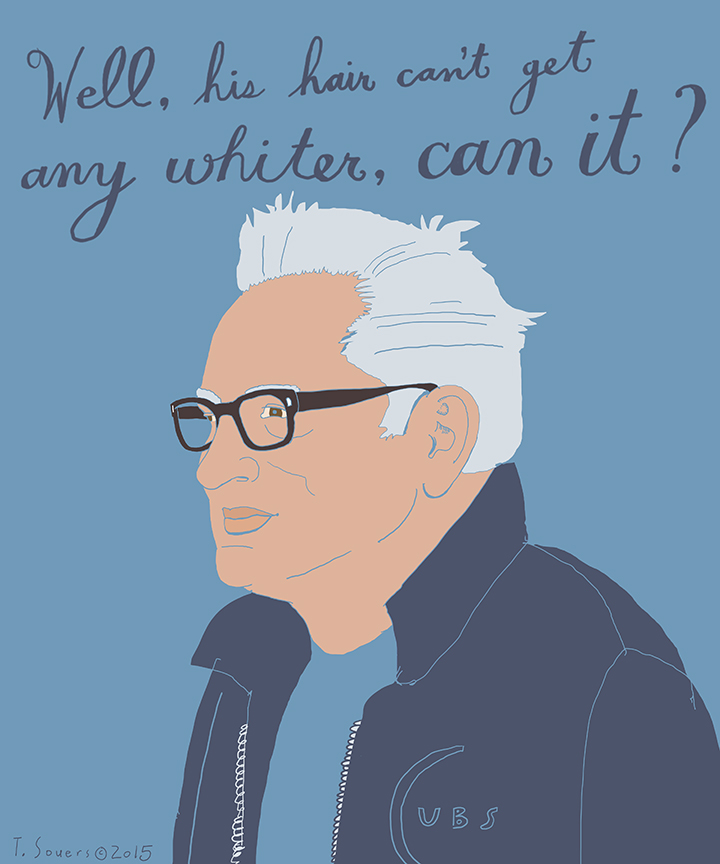 This is sad, but it's been only a couple months and already I can't really think of a single memorable thing about Ricky Renteria.
Not running to first base is not okay.
That was Dale Sveum.
Quade?
That was an accident or something.
Lou Piniella was... there was some AMAZING baseball played under that man, but in the end I mostly remember this: "What can you do, fellas?"
That was his answer to all the questions about failure.
"Why not us?" was In Dusty We Trusty. No comment on how to use pitchers.
Then I kinda go mostly blank til Frey and Zim.

Managers don't play.
They don't hit or catch or throw.
But some of them put a thumbprint on a particular time in history.
They help make some memories happen.
I never paid attention to the Tampa Bay Rays.
I knew Joe Maddon was supposed to be a really good manager, that's about all.
And after this convention I would say I've never seen anything like this guy as a manager or coach for a pro team anywhere.

Dexter Fowler.
The outfield gets a tad more crowded and Arismendy Alcantara goes down a peg while suddenly third base is all Mike Olt's! 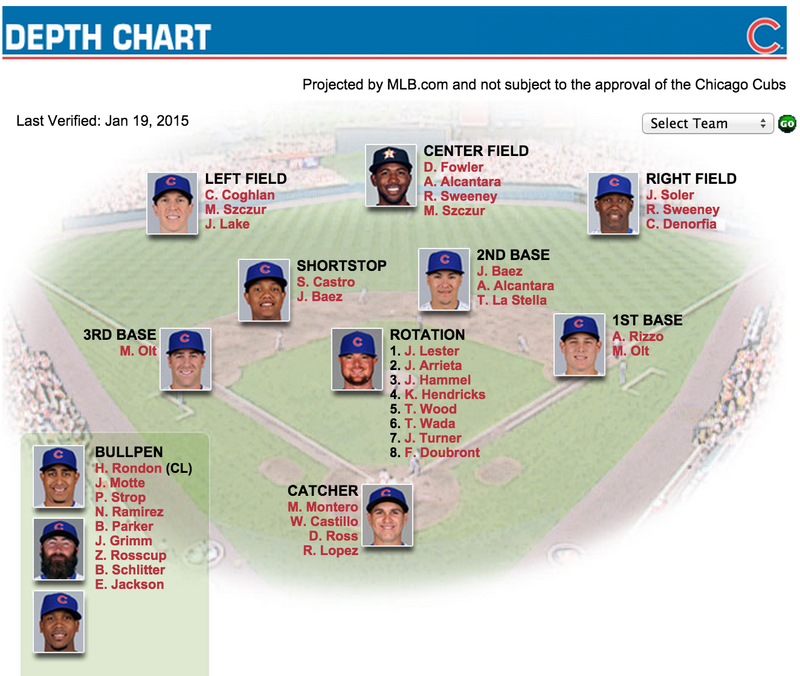 We'll look back at this picture about the 3rd week of the season and see what happened.
It's gonna be a blast watching this team come into focus.


I've got so much going on over the next month, please just forgive me in advance for being so spotty.

Lots of applause at this year's Cubs Convention.
Lots.
From what I heard, the loudest belonged to Joe Maddon.
But I'll get to him tomorrow.
For today... 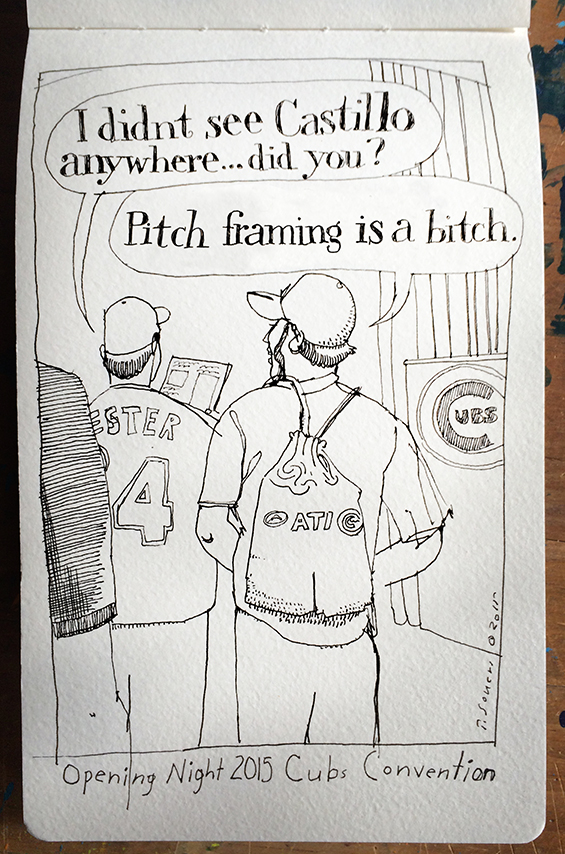 I heard a couple guys talking about Welington Castillo on the way out of the Opening Ceremony.
Later, I checked what players were supposed to be here, and Castillo was listed but I couldn't remember seeing him that night either.
Maybe he was there, maybe not, but Montero sure did get a huge applause.
So did Ted Lilly, which made me quite happy.
They did that thing where the emcee (Len this year as Pat had minor surgery - all good tho) introduces all the players there starting with the alumni coming from just off stage and then to the players who came on thru the crowd.
Yeah, it's all silly but man that's a nice silly to be part of.
Here's most of the alumni and team... 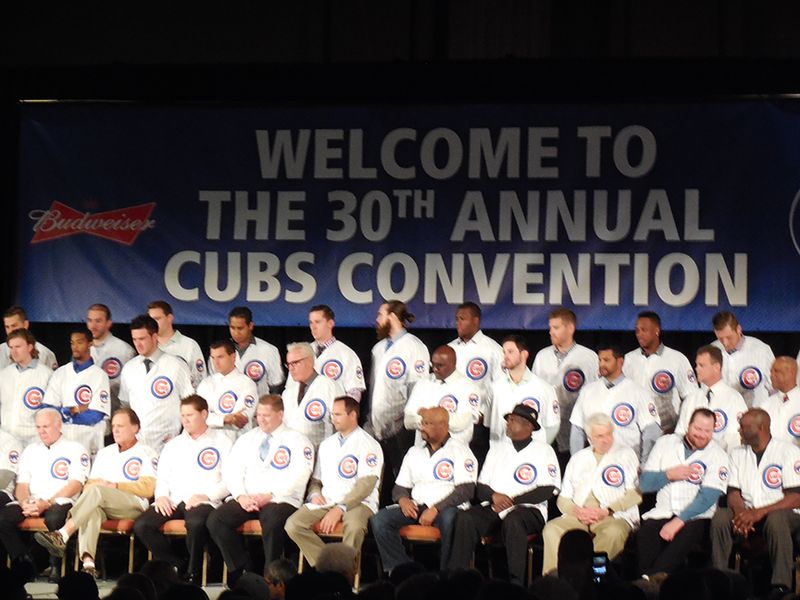 Over to the right were Lester and Jason Motte, who looked like a singer for the Travis Bickle Barbershop Quartet. 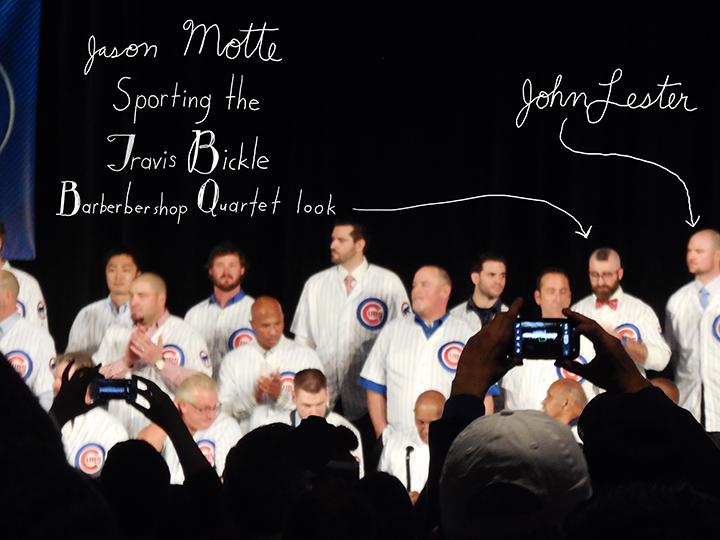 Anyway, all good and loud that night.

Saturday, I really just wanted to see the "Meet Cubs Baseball Management" and then in the same room would be the "Joe Maddon and his Coaching Staff".
I asked one of the convention staff who was by the door, "Do they clear out the rooms before bringing on the next presentation?" and the guys said no.
So I began the day in "Cubs Jeapordy" standing at the back.
Towards the end, people began to leave their seats up front so I hauled ass up there and got one.
Had to sit there for a half hour, but was entertained by the people sitting around me. 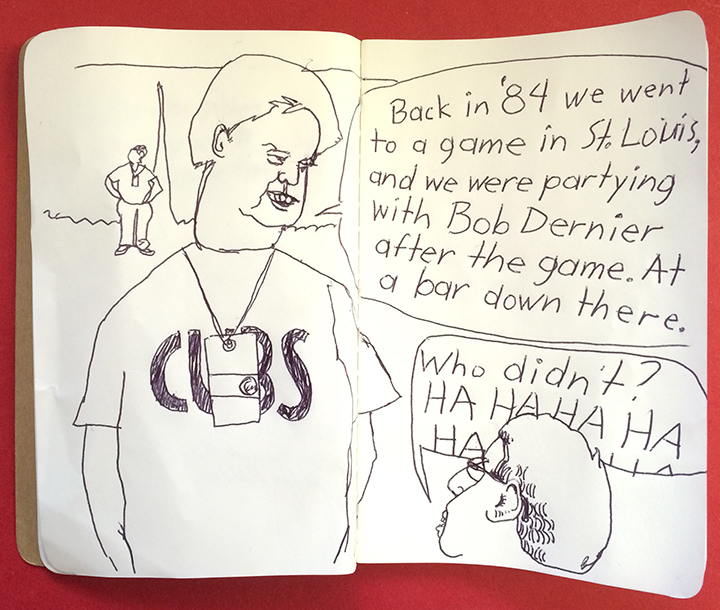 And... before I knew it here's Epstein/Hoyer/Bush/Rehman all sitting up there talking.
Here's what Theo said right up front: 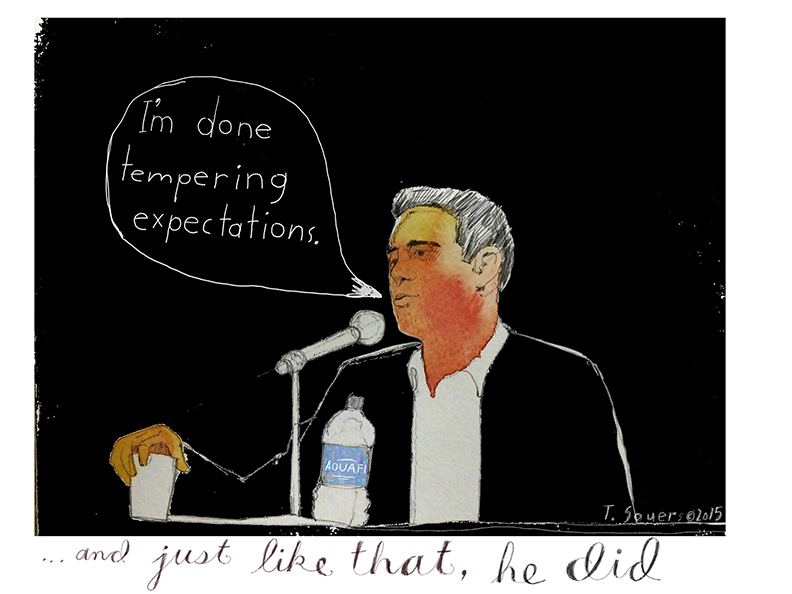 After years of Cubs Management talking about how they had a good product to put on the field but were clearly winking to us at the same time, this "I'm done tempering expectations" was really refreshing.
I coulda left right then and been happy, but Maddon was coming next.

I'll do that tomorrow.

Hi.
Well, you know that Vine Line and I parted ways so now I gotta plunk down the cash to go to the Cubs Convention.
Whatever, this year it actually seems like there'll be cool stuff going on.
I'm dying to hear what Joe Maddon has to say that might be a little more insightful than, "We're gonna get more left-handed," you know?
Anyway, I missed last year but otherwise I've been going since '08.

Here are some drawings and photos from those conventions.
This is from 2012, and while everybody is gobsmacked by the players, I really love overhearing regular Cub Fans talk... 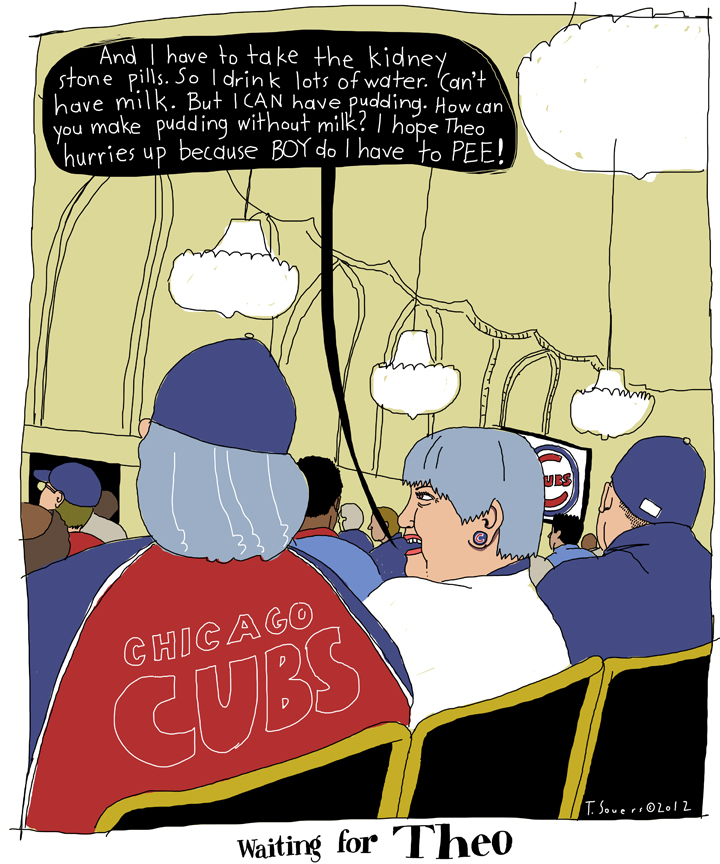 This is from '09 when a guy in front of me at the opening ceremony started crying during the video before any players even came out. 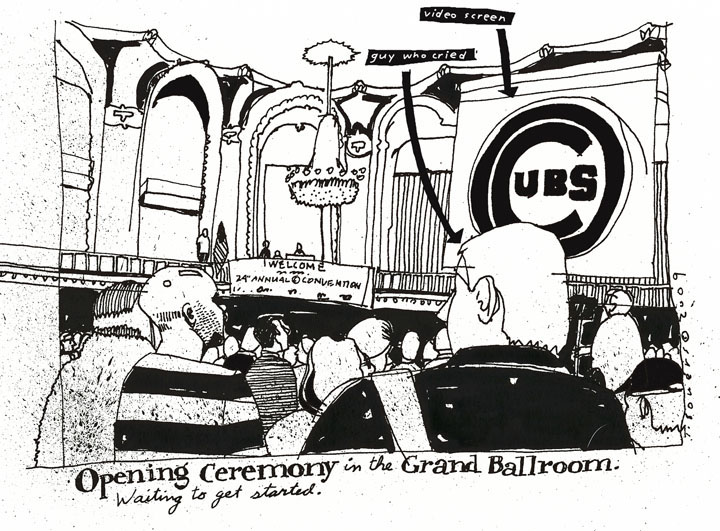 Here's one from the same year - a really mad fan yells at hitting coach Gerald Perry about Alfonso Soriano. Perry's response was priceless. 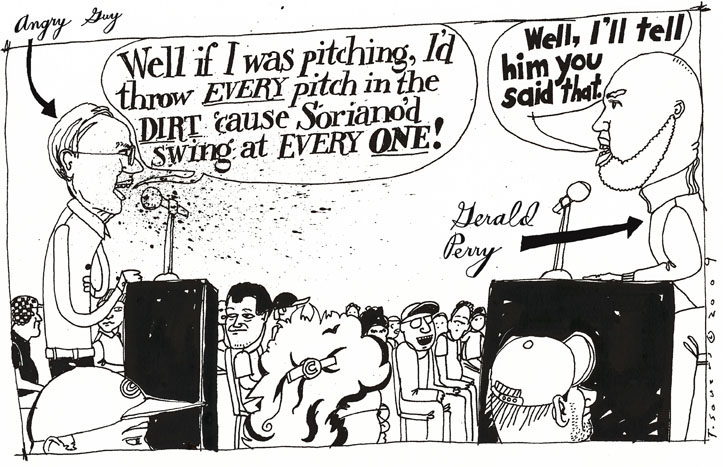 Here's from '10, when they had me up on a small stage with Randy Hundley and Brett Jackson. I was to speak about doing illustrations for Vine Line. Even with the 4 fans in the room, it was intimidating. 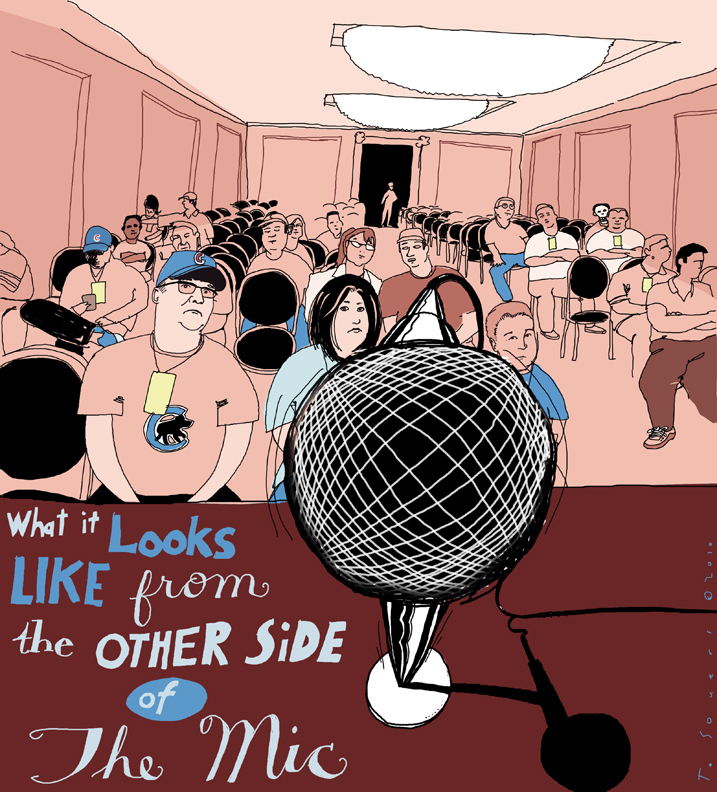 To break the ice, I asked Randy Hundley for an autograph. 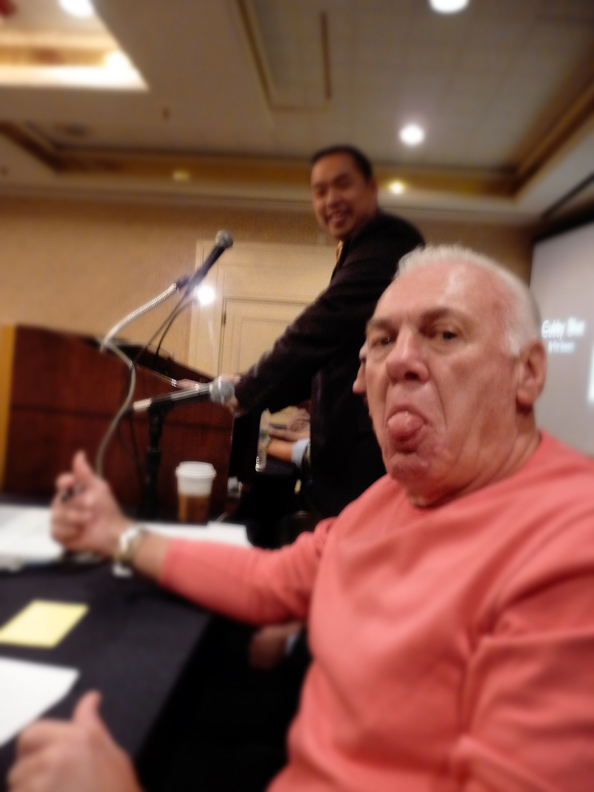 One time I actually had my sketchbook with me and got a really cool autograph from Pat Hughes. 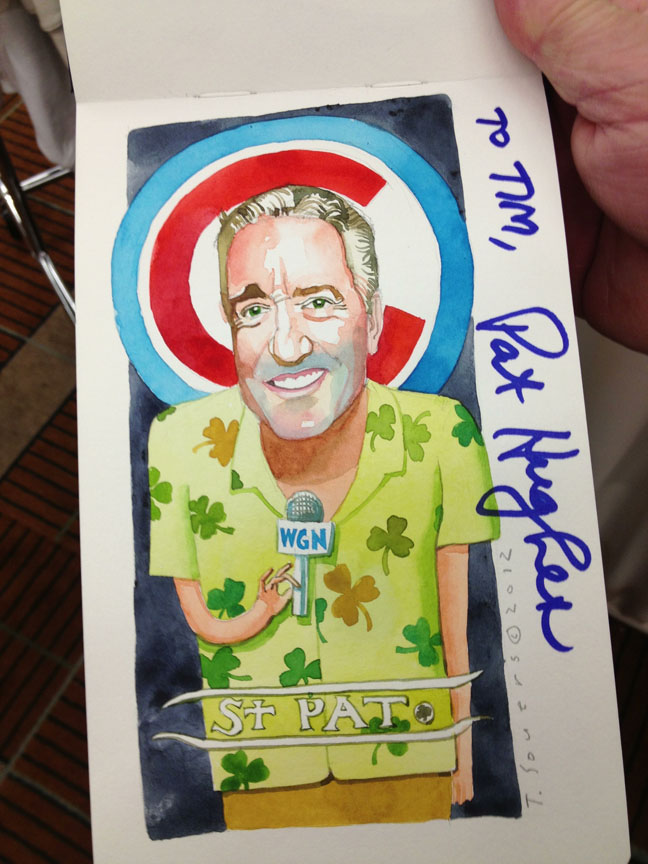 In '13, Tom Ricketts got kind of passionate about being restricted by rooftop owners and the city when it came to running the club. 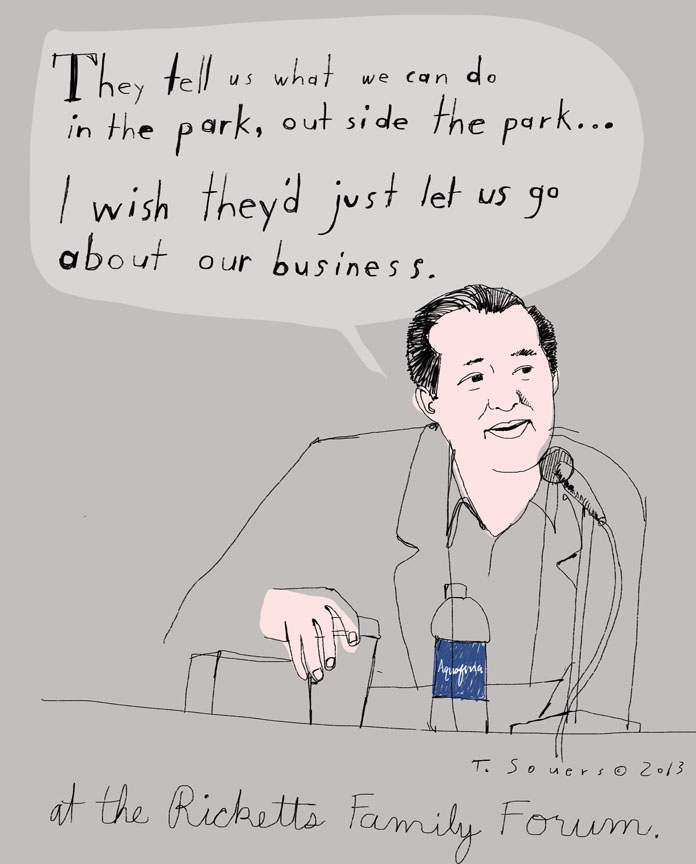 I swear at every convention, this dude walks around in his pajamas all Saturday long. 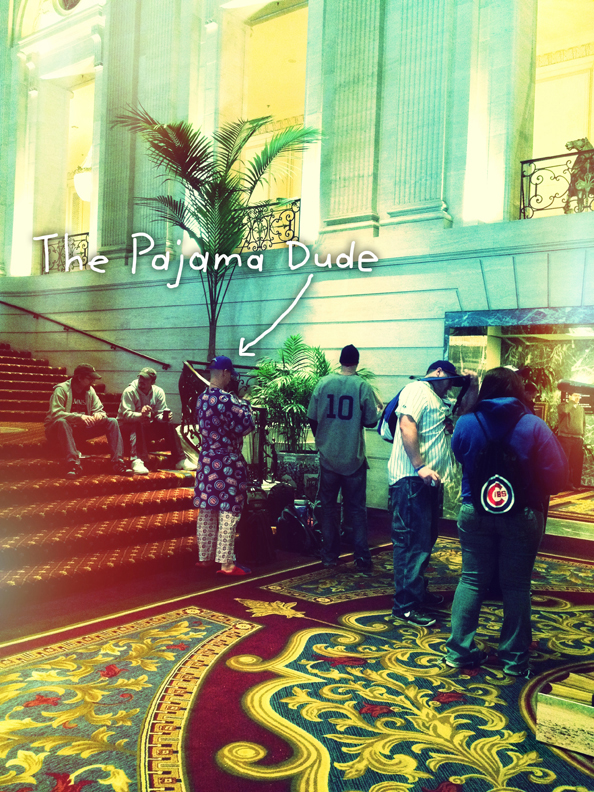 There are so many times when out of nowhere one of your fav all timers is just sitting there, like Jody Davis (I still feel bad for Billy Buckner, but it was cool to see people being cool to him). 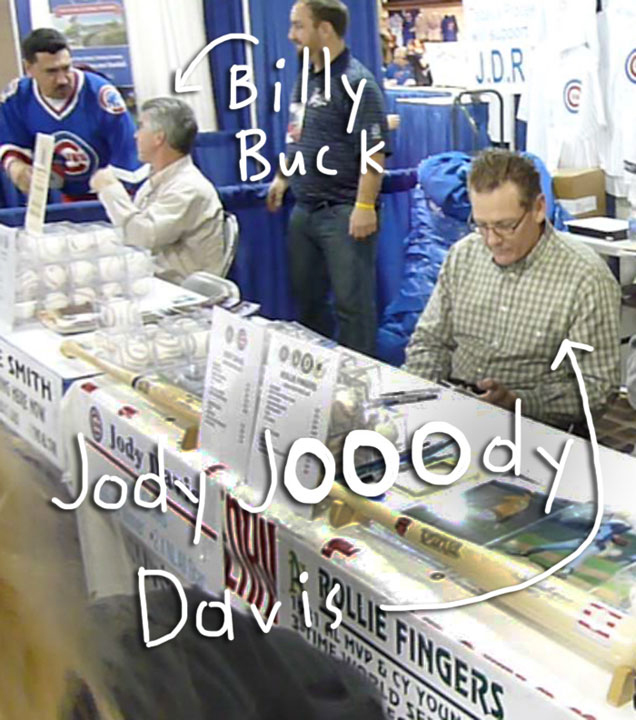 And this is probably my favorite drawing from any convention, a mom and son talking about the "sweet spot" on a baseball for an autograph. 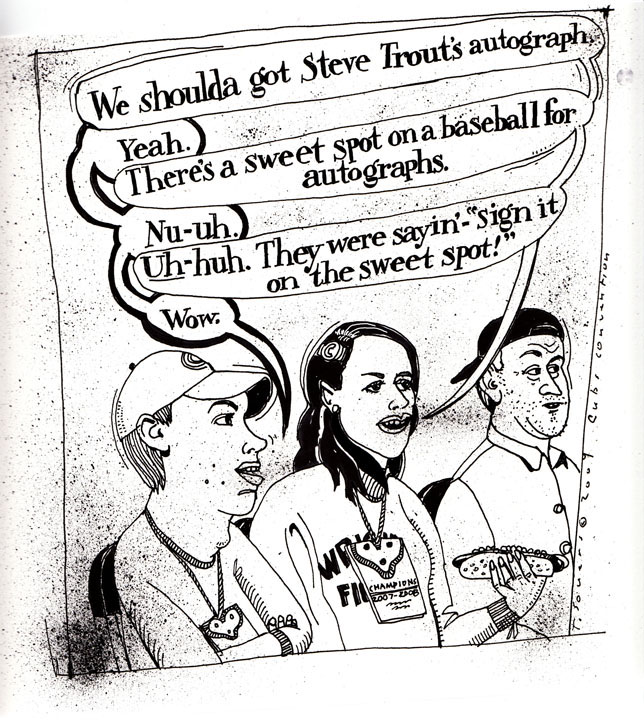 Okay so look for some drawings probably on Sunday.
Go Cubs!
It's weird how much I'm looking forward to this...

My neighbor's kid pulled a leg off a beetle and named it Aaron Rodgers. 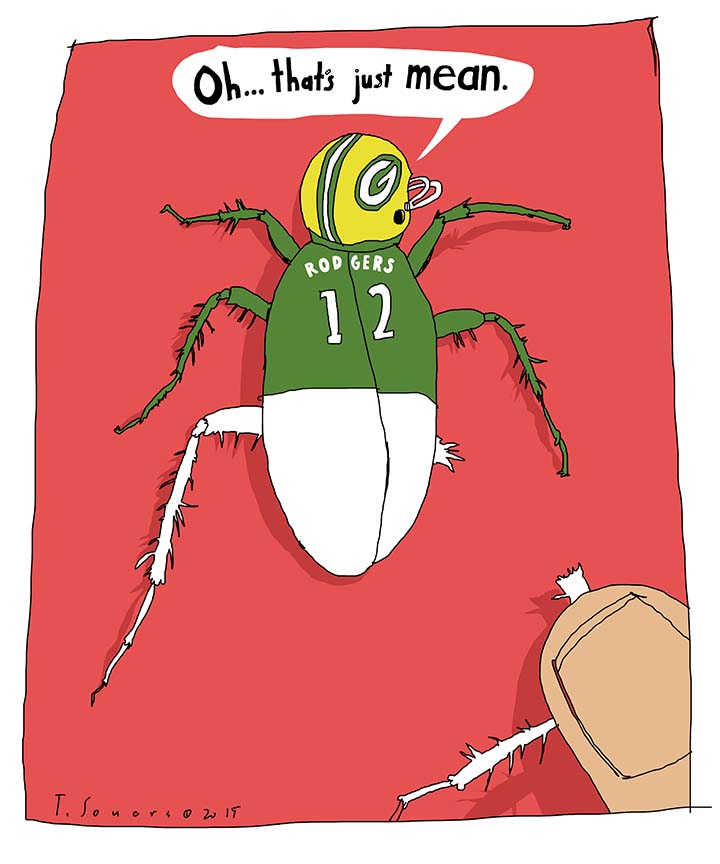 Okay, that didn't really happen with the neighbor's kid.

But when we were little, my brother had this pet boa constrictor that he fed mice to, and he named each mouse after a detective from a detective show.
Mannix or Rockford or someone.
It never ended well for the mice.
"Lets see how long Barnaby Jones can survive."
"How is Columbo gonna talk his way out of this one."
Stuff like that.
That's really the thing with Aaron Rodgers.
After watching his one-legged show against the Cowboys, you have to think it'll only get worse against Seattle and that defense.
How is he going to survive?
Well, he is Aaron Rodgers (come on Bears fans, you gotta wish he was in Chicago).
Probably got a couple tricks up his sleeve, and to me the Seahawks are the new Cowboys.
I'd love to see them lose, even to the Pack.

And for Cub Fans, that NFC Champoinship game starts at 2:05 Chi-time on Sunday, so no sweat seeing that last morning of Cubs Convention and then getting in front of a tv.
Unless you're still in line for a Kris Bryant autograph.