That really is the best Bloody Mary recipe.
I've said it before. (The recipe in that post shows how to make a pitcher, too).
I highly recommend you try it.
See if you can forget about Trestman and Emery and Cutler and guys injuring themselves while celebrating a meaningless sack for awhile.

When I was in college, a buddy of mine wanted to be a weatherman.
Majored in meteorology.
This was in Flagstaff, and whenever bad weather was predicted, he wanted to go camping on the San Francisco Peaks to see it firsthand.
I went with him this one time and this is far too long a story, but we ended up accidentally setting a forest fire.
2 acres.
That's really not very big for a forest fire, but whatever.
He was a football player, and ripped a rotten tree trunk out of the ground that we used for a firepit.
I'd been a Boyscout - we cleared all this high grass from around the fire by 10 yards.
When we were done cooking breakfast, we buried the coals and went on a hike.
Later, the forest service expert guy said that the roots from the rotten tree burned underground way out past our cleared area and caught the grass on fire.
So, yes we were idiots for starting a fire, but I thought we'd done a good job with it.
Anyway, that was one of the worst things EVER, right?
My room mate goes, "Hey, a thousand years from now who's gonna know?"
Trying to make me feel better.
I'd like to be able to say the same about this 2014 Bears season, but probably we'll all remember it for a looong time.

But maybe out at Halas Hall, they'll just lose all the records of this revolting year. 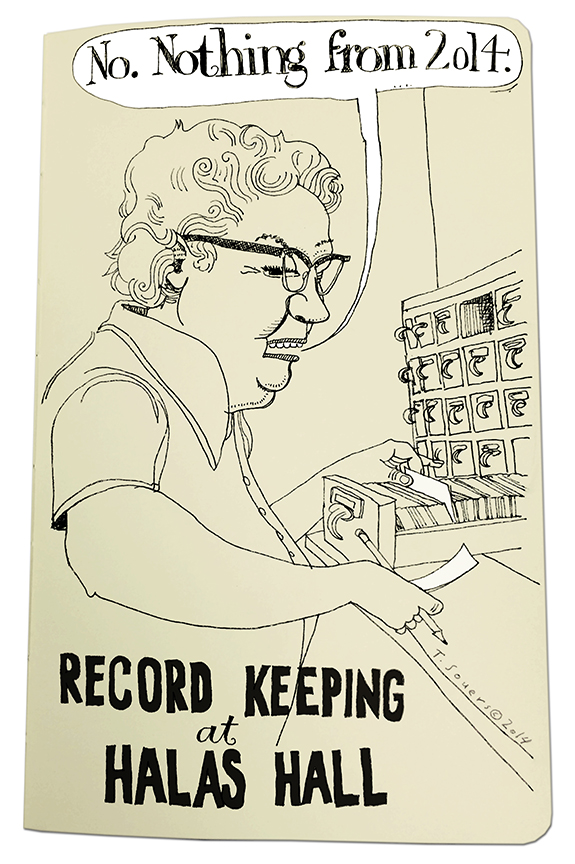 Then there's this drawing: 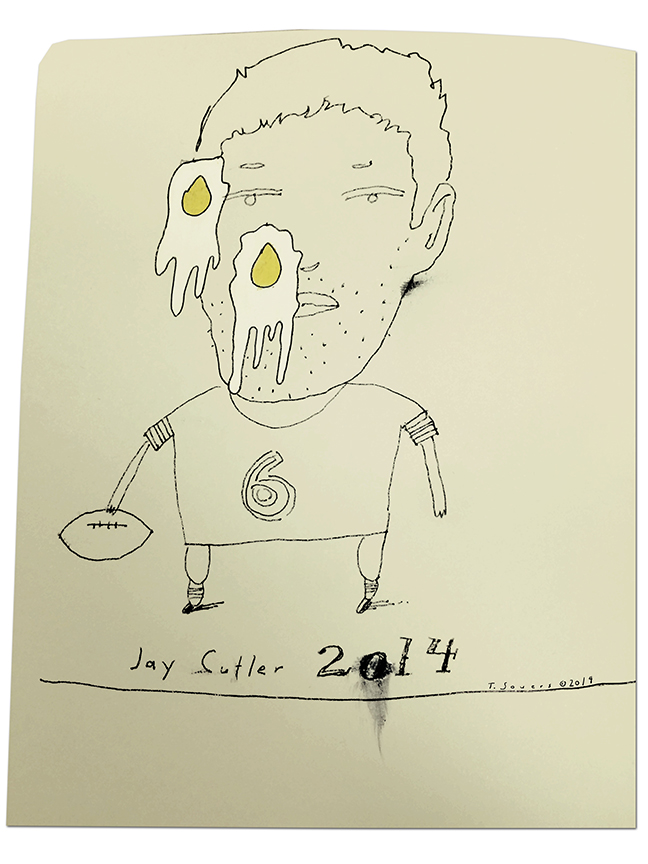 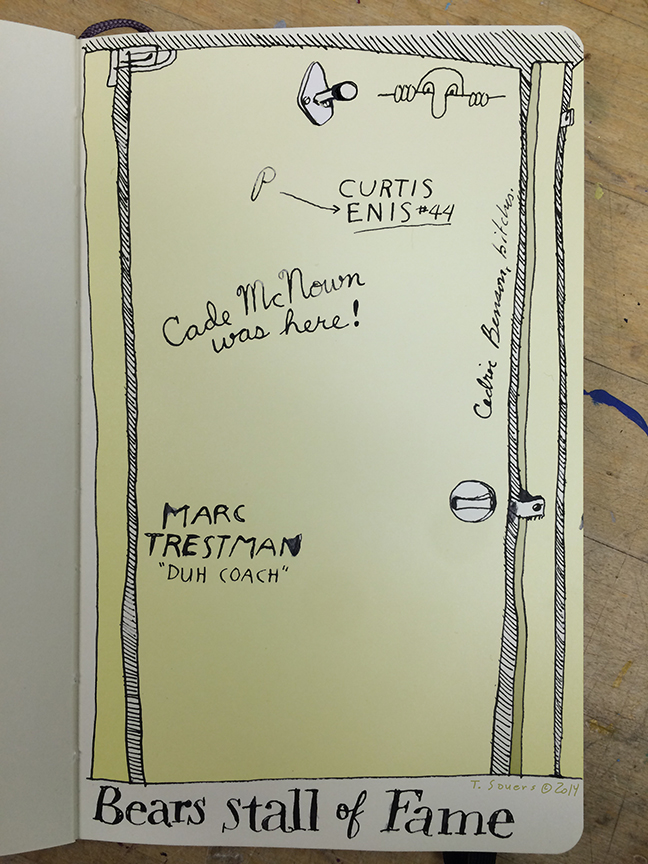 Remember those guys?
Surely Marc Trestman isn't as unlikable as Cade McNown or Curtis Enis, but did he ever carve out a nice niche of incompetence in Bears' history.
And now?

I just got this on my iPhone. 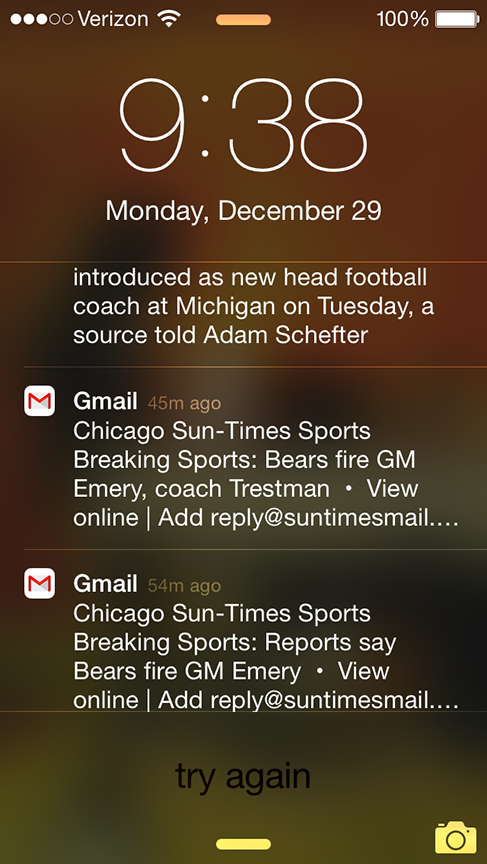 It's such wonderful news.
I really didn't expect it from Bears' ownership.
But this last year was the worst year of being a Bear Fan pretty much ever.
Because it wasn't just losing.
It was layers and layers and whole other dimensions of wrong.
Who will be the next GM?
And if you're George McCaskey... say Mike Shanahan is available before you decide on the GM - do you hire him?

Anyway, it's sad but the most proud I've been of my favorite team this year is right now, at the speed at which they canned Emery and Trestman. 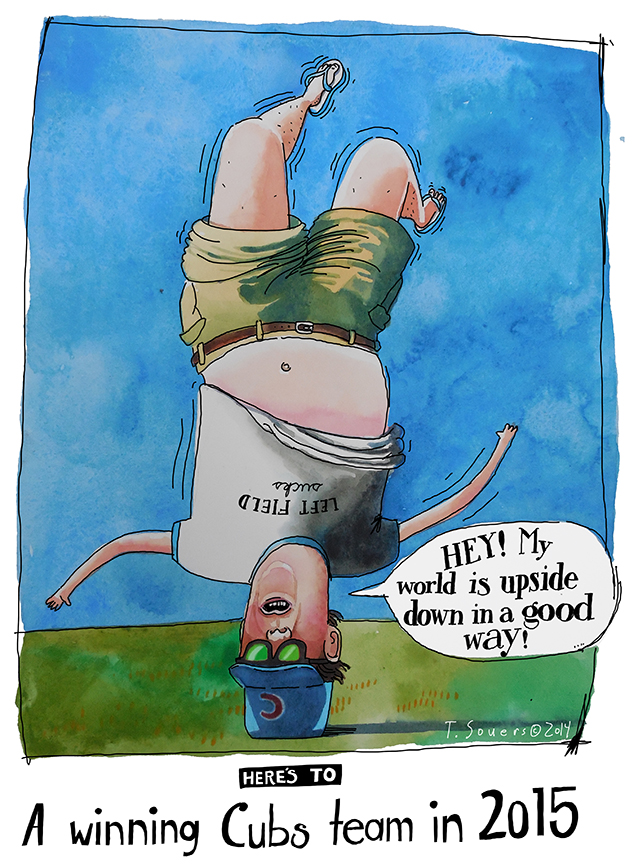 When Theo Epstein and Jed Hoyer and that whole new Cubs Way gang took over, they did the smartest thing by not really talking a timetable for... winning.
They let everybody else do that.
And well... I didn't really allow myself to think about when they'd step on the gas.
At the end of this last season I still figured a couple years from now.
I mean, sure some of the kids had come up, but I still had flipping for players at the front of my brain.
Sure there's the Big Plan in place, but the truly awesome thing about these guys is the way they've improvised.
There's no way that Joe Maddon was in anybody's plans.
When he became available and they just knocked everybody out of the way and got him, that was soooo inspiring.

Do you think getting Maddon was the thing that made 'em push the start button?
Like...do you think they'd have gotten Lester if Renteria was still managing?
I don't.
I figure Maddon was that thing, and man did that ever start a chain of events that turned our collective world upside down.
There's a momentum in the air we haven't felt ever.
Yes you can talk about early Dusty and early Lou, but we're all smarter now right?
The Cubs didn't just get more left handed, you know?

Anyway...
Contending next year, anyone?

Hey you all have a fabulous Holiday.
I'm going to take a couple days and enjoy my friends and family.
In fact, I have a 17 pound prime rib I gotta coat with rosemary and garlic right now.

What will opening day look like at Wrigley in 2015? 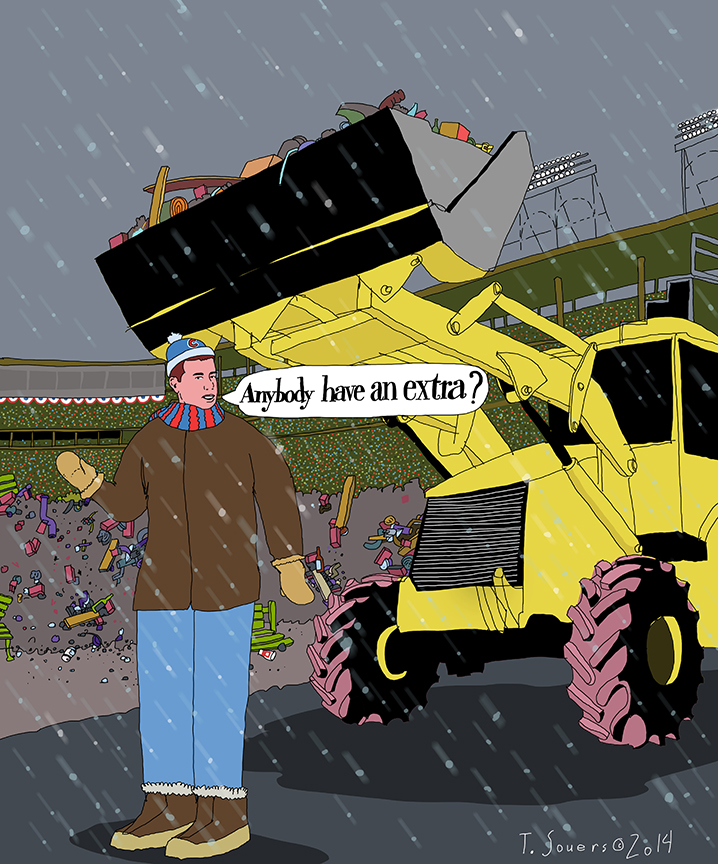 Sunday night, April 5th 2015 at 7:05 pm.
That'll be the night the St. Louis Cardinals come to Wrigley Field to play the Chicago Cubs at their home opener.
I'm pretty sure that even if the bleachers aren't finished and it's snowing and about 26 degrees, that game is gonna sell out.
You could last at least a couple innings.
I mean, maybe the new jumbotron big screen thing will not only show replays but also create a huge wind block.

One time I had just come back from Australia and was reeeaal jetlagged, showed up about the 5th because I'd lost the meaning of time, walked all the way up to our seats and found Sutter.
The frigid wind was so awful.
Sutter had an extra fridge magnet schedule and gave it to me.
I watched for about 5 minutes and then left.
Opening day is rarely about the game anyway - usually it's just about beer and being there.
This year however, just imagine how pumped we're all going to be.
Even if you're not there, this is going to be the most interesting opening day of Cub Ball in forever.
You heard that The Schedulers moved some things around and this game will be MLB's Opening Night game on ESPN2.
Yep, even the networks are jazzed.
Which is good since the Cubs have burned them so badly the last couple years.
Remember in '11, the Cubs v Red Sox series with Quade in Boston?
A week of promo commercials with historic footage leading up to what was just the worst baseball ever with a Cubs team that didn't stand a chance (even though they won one).
It'll be different next season.
In a really good way.

It's so much nicer to think about next April than what's going on with the Bears right now.
Thought I'd give us a break.

Great holiday gift for any Blackhawks fan: The Shawzall. 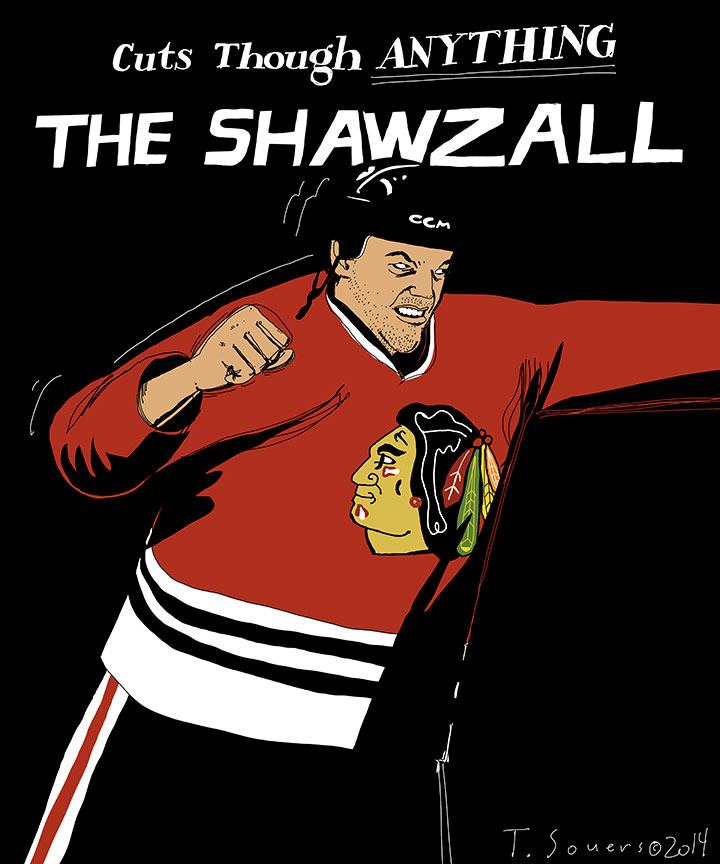 Andrew Shaw.... Sawzall... THE SHAWZALL!
Get it?
HAHAHAHAHAHAHA.
Okay okay... I know, I do this sometimes.
Because it's fun.
You ever used a sawzall?
I got to help a guy tear down part of his house, and the only thing you have to worry about with these tools is... are you gonna hit something electric back behind those walls?
Because they cut through anything.
Like our buddy Andrew cuts through anything.
If you hadn't noticed, the Hawks are back in first (in the Central) where they belong.
Awhile back they a little funky period followed by an 8 game winning streak.
Corey Crawford, I'm sure you heard, fell walking out of a concert and missed 8 games but will return tonight against Columbus.

Other stuff I'm sure you heard: the Cubs signed reliever Jason Motte, and Jon Lester's personal catcher David Ross who will be 38 by next season.
2 years $5 mil.
Are they gonna keep 3 catchers or is Welly gone? We'll see.
Nobody likes the idea of... say Montero gets hurt hurt, is Ross good for an extended period?
There's so much baseball news it's just crazy and hard to keep up with.

And not sure if you heard but Jay Cutler got benched.
I am not kidding.

Lastly, when we did the Monopoly promotion last summer, it was a big thing with Joe Pytka directing, starring LeBron, Patrick Kane, and NASCAR racer Jamie McMurray (we also had soccer player Alex Morgan but she couldn't make the shoot and we had to film her later and green screen her in).
We also had to do some still photography for social media, and got to shoot with an excellent sports guy named Todd Rosenberg.
He was super talented, a nice guy and really good with the athletes.
He's in the lower right in this shot (shooting on location, you gotta work with where you are - they brought a white backdrop for the portraits and we shot in an office building). He's also been working with Sports Illustrated for a loong time.

So the other day I get an email.
All it said was: "I wish you could have been at this shoot."

The attachment was this: 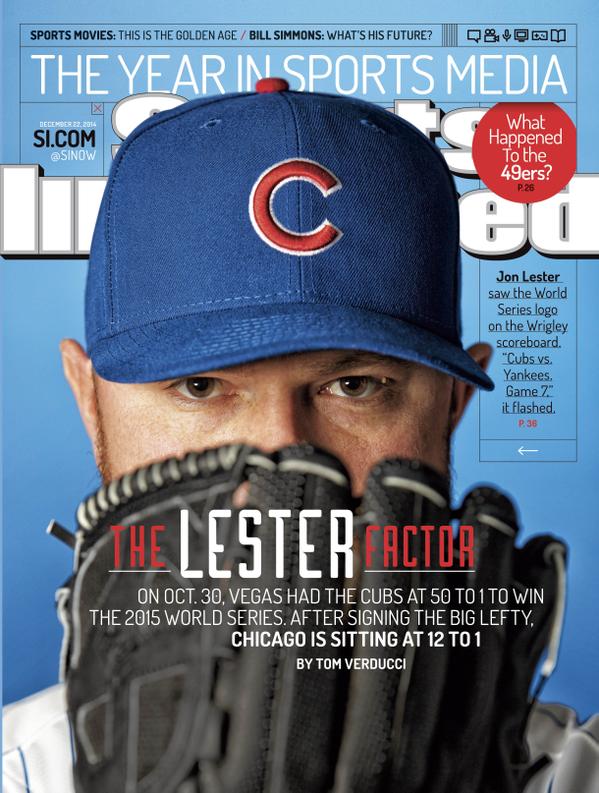 Todd, if you read this please know that I can TOTALLY work on the side as an "assistant" and am perfectly capable of getting coffee, opening doors, um.. sweeping floors...all for no charge whatsoever. I'LL DO ANYTHING TO BE ON YOUR NEXT LESTER JOB, DUDE.

It could be worse, Bears Fans.

I've been... struggling lately.
The Bears and all.
This morning, just when I was feeling really sorry for myself, I walked into my office and found a sad banana, who taught me a valubable lesson. 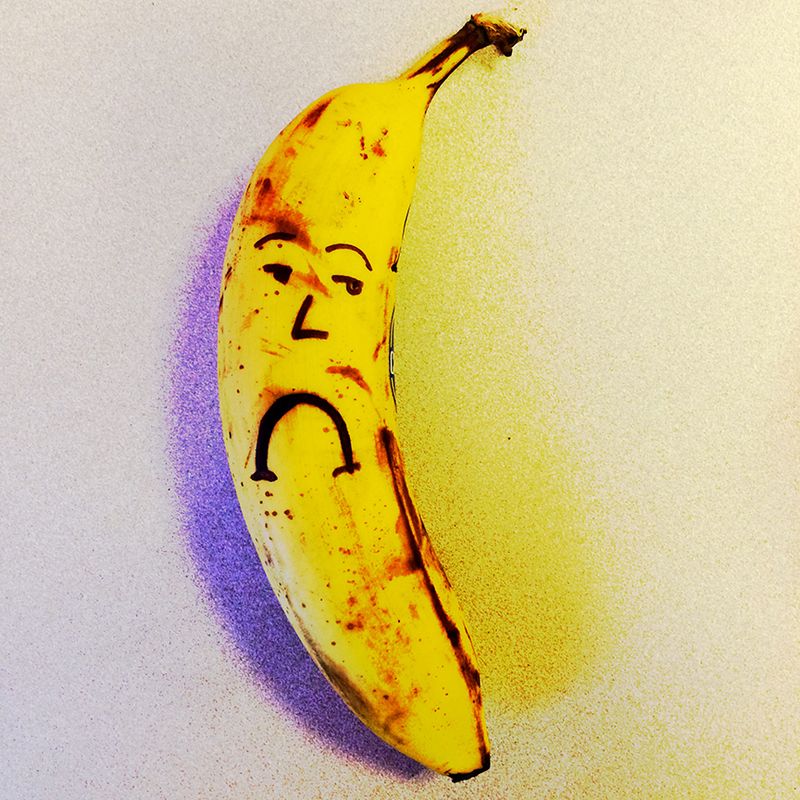 You see, he can't talk on the phone. 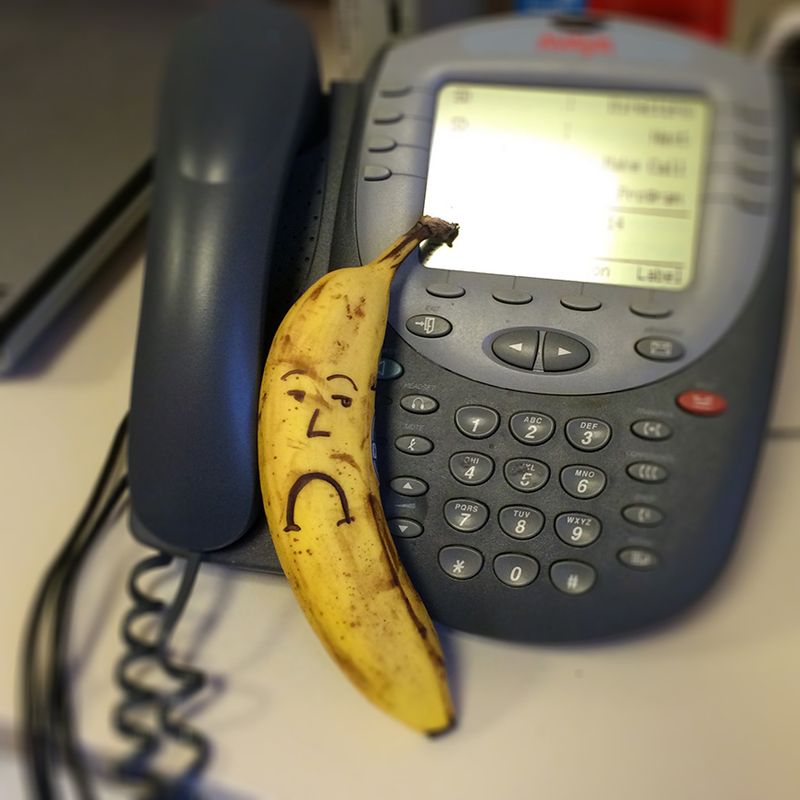 He can't have a Diet Dr. Pepper. 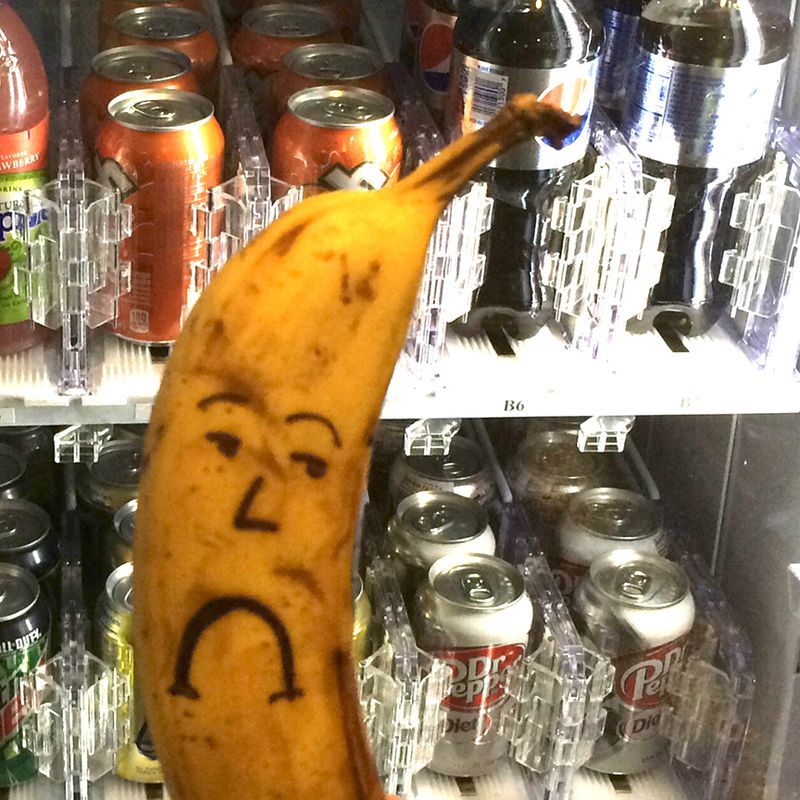 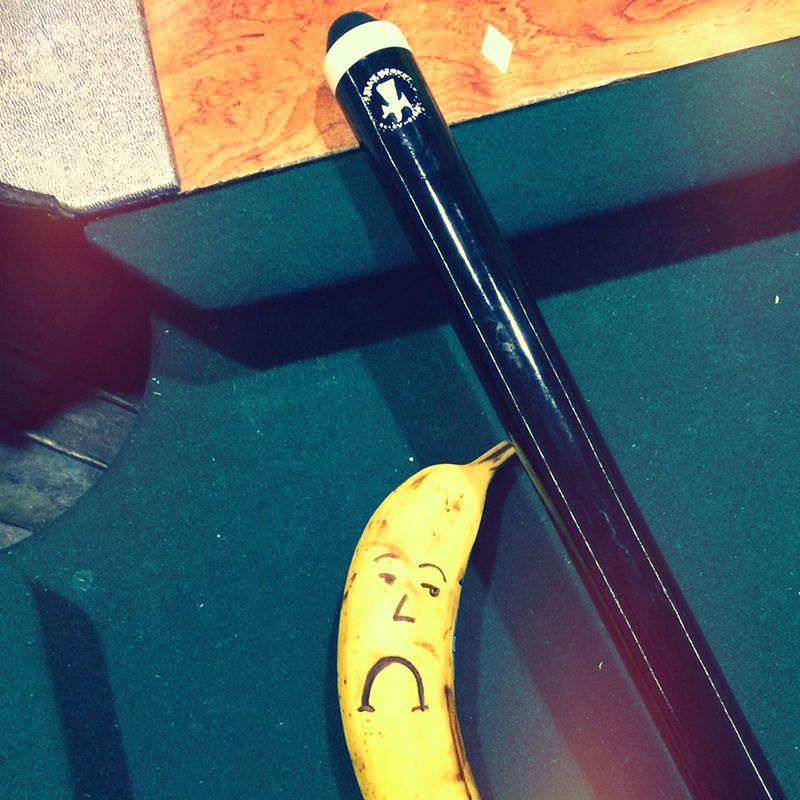 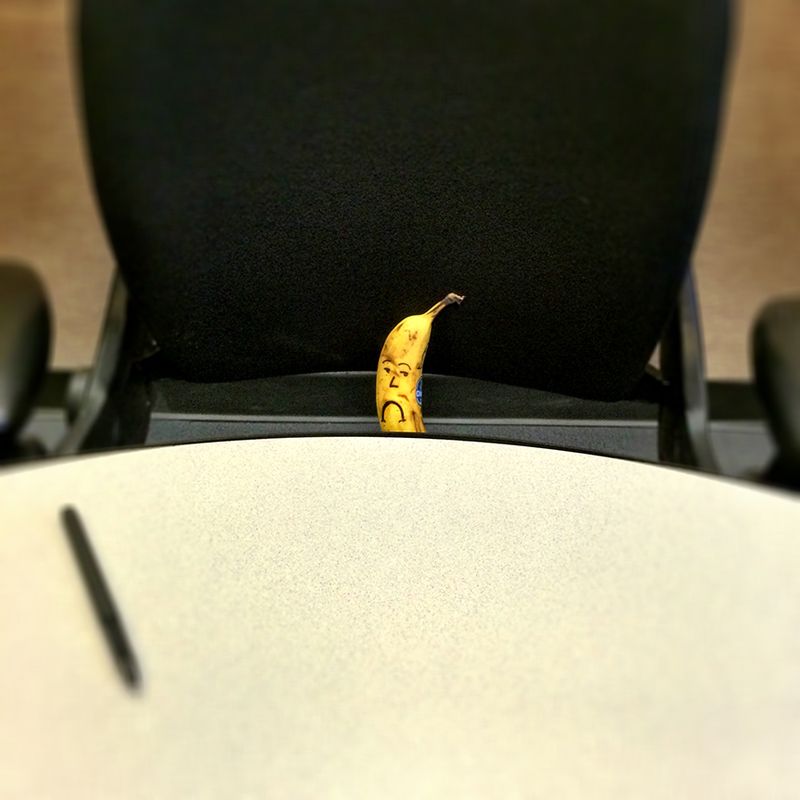 So keep a stiff upper lip there, Bear Fans.
It could be worse.

ps: Not kidding at all. That sad banana just showed up in my office. Which was lucky, since I think I'm waaay off the despair deep end with my favorite Chicago professional football team. Taking these photos totally took my mind off my troubles and hope they did for you too.