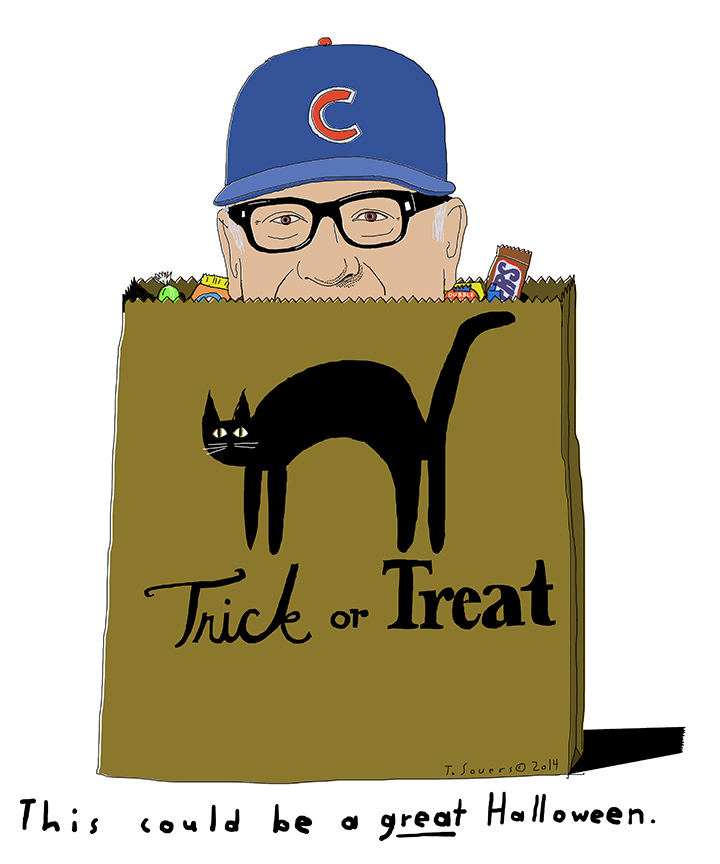 I know.
I feel bad for Ricky Renteria too.
But not so much that I wouldn't love Joe Maddon to get signed by the Cubs today.
I cannot stand the premature announcements leaving Ricky twisting in this cruel Halloween wind (have you been outside? Kids are gonna FREEZE tonight!).
So please let that happen like, this morning, okay Theo?

Just so you know, if I miss a couple days when something really really big is going on?
Like the World Series?
What that means is that it's crazy busy at work.
So... sorry, but there's nothin' I can do about it.

I was kind of bummed about the Royals losing (I had it on Emily's radio in my office), but not so much that I wasn't absolutely amazed by the performance of Madison Bumgarner.
Everybody is saying it may be the greatest performance ever.
I thought it was pure little league.
In 6th grade I played for a City League (that was the bad league) team sponsored by Schickedanz Realty.
I'm spelling it wrong for sure, but that's how it was pronounced.
Most people called us "Shitcan'tdance" or anything that started with "shit".
They put me at short, and while I could field a grounder, every one of my throws went 15 feet over the first baseman's head.
Yada yada anyway, we had one really good player on our team, Bill Wright.
"Iron Man Bill Wright".
He was our pitcher, and... you know this was a loooong time ago, before anybody thought about wrecking a kid's arm.
Bill pitched the vast majority of our games.
Back to back double headers, whatever - if we were going to have a chance at winning, that guy had to be on the mound.
So... "Hey Madison! Get out there and pitch the last 5 innings even though you pitched just a couple days ago."
That's pure little league.
But god, what a performance.

Yordana Ventura. What would it feel like to be that guy? 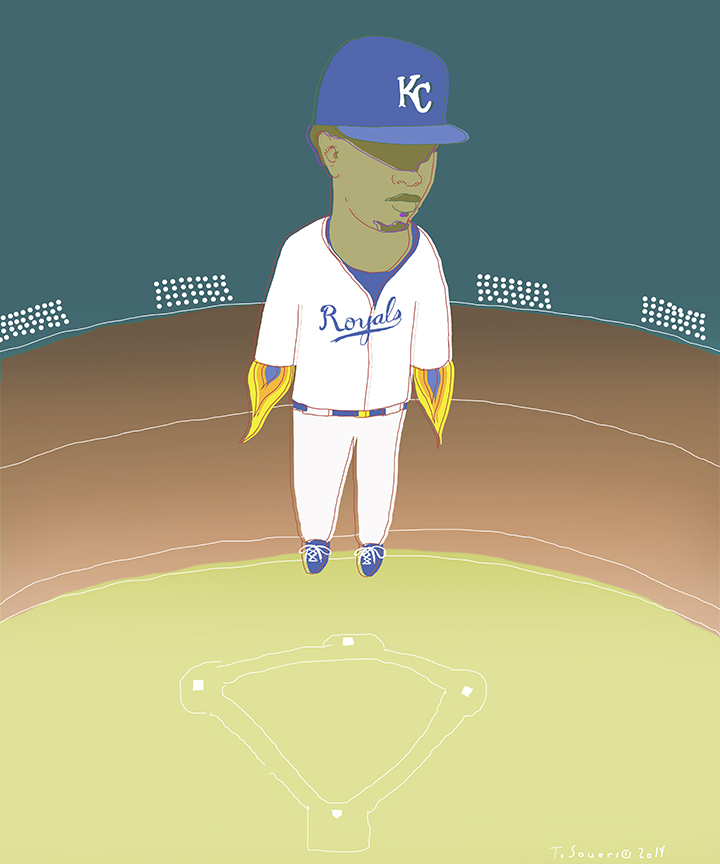 Yordana Vantura.
His team comes home to Kansas City for game 6 of the World Series, he's so magic he can walk 5 and feel no damage.
The Royal bats come to relentless life and score again and again in a merciless 2nd inning that sends Jake Peavy to the showers and continues to batter Yusmeiro Petit until 7 runs have crossed the plate and it's all over.
Already.
All the Giants can do is watch Ventura pitch.
Which he does for 7 scoreless innings, bringing his career total to 198.1.
How amazing would that feel?

There's something going on this year that I haven't felt in a really long time.
Those guys in blue all shaking hands and high-fiving after the game could be another bunch of guys in blue doing the same thing.
Pretty soon, too.
Weird, huh?

What a Series.
Game 7 tonight.

Baseball is a team sport except... Bumgarner. 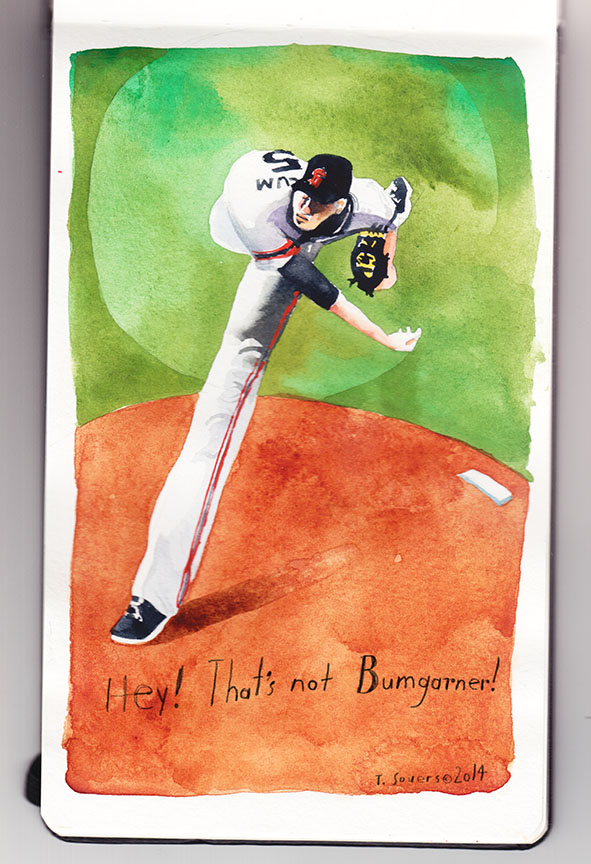 This is kind of a bait and switch, as far as the illustration.
Sometimes, on a hunch I'll think one thing is going to happen and invest my blog time in a painting that has no relevance to what happened.
Yesterday, my Spider Sense told me that Tim Lincecum was going to play some kind of major role in game number 5.
And then Madison Bumgarner happened so...
But it's still kind of cool watercolor, right?
Okay, Madison Bumgarner.
Pretty sure he wrapped up this year's World Series MVP by going the Full 9 and shutting out the Royals in game number five, 5-zeero.
It's amazing that a guy can have that much practice at throwing innings during baseball's premier event.
He's 26 years old, and this is his 3rd series.
So... what can you say but this guy knows what he's doing and does it really well.
Lucky for the Royals that there's a day off, and their bullpen (they only used two) can rest.
Giants now up 3 games to 2 going back to Kansas City tomorrow night.
The only weird thing I heard was Ned Yost saying something like he (I heard this on the broadcast) was hoping the series went the full 7 games.
Here's something about that.
I mean, I get being a fan of baseball and all, but that just sounds weird.

This is something that didn't sound weird.
Going to a commercial during the Bears game, one of the announcers said something like "The New England Patriots are playing a great game and the Bears are... on the field."
Had to laugh at that.
I watched the start, then my wife asked me to clean up the garden.
When I came back inside, it was 45-7.
It used to be in games like these, the Bear Fan could at least find joy in watching Gary Fencik smashing recievers.
Brian Urlacher blowing somebody up.
Instead, I get Lamarr Houston doing a ridiculous sack dance and blowing out his own knee.

This may be the hardest-to-watch Bears team since forever.

Hunter Pence.
I used to loathe this guy when he was an Astro, mostly because he was an Astro.
But now he's sort of turned into the "scrappy" guy I admire.
Usually, on your basic Cubs teams of the past, the "scrappy" guy is really... not very good.
Know what I mean?
There's usually a deficiency we forgive because whoever the scrappy guy is - a Darwin Barney or a Sam Fuld say - they work extra hard to make up for it.
I've always cut a guy some slack if he really really goes 110%.
Now with this all-new kind of Cubs' team that's loaded with young talent, I'm looking forward to when our "scrappy" guy is actually good.
Someone with lots of tools like Hunter Pence.

Amazing game last night as the Giants got to the Royal pen in a big way and take game four 11-4.
But the guys who gave up most of the damage were Brandon Finnegan and Tim Collins.
Herrera and Davis are rested up for tonight, and if Shields can hang (not give up runs), then the pen can do their thing.
Of course, it's Madison Bumgarner for the Giants so... there's that.
What a fantastic series.

Next for fantastic: there are two completely different yet amazing movie experiences out right now.
If you're in a loud mood, go see "Fury".
Not kidding.
Eat lots of popcorn and get ready for the quiet scenes setting up the action.
And if you're in the mood just to see excellence, go see "St. Vincent".
Bill Murray just gets better as time goes on.

Joe Maddon rumors in the middle of the World Series. Weird, but good for Cub fans. 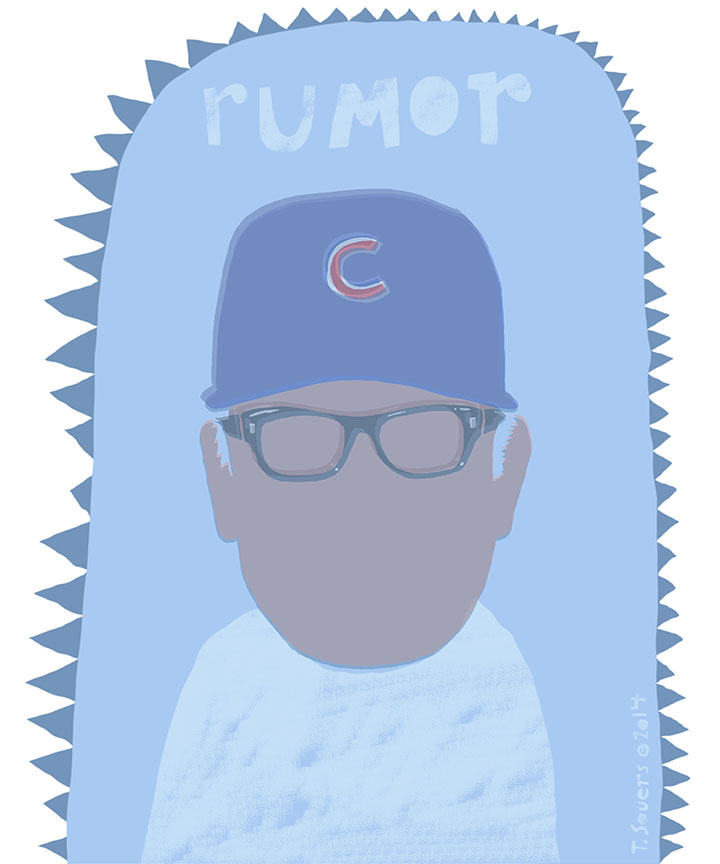 You'd think there would be a big backlash of anger from ohhh, maybe Bud Selig or somebody up top about the timing of this Joe Maddon thing.
"HE'S TRYING TO UPSTAGE THE SERIES!"
But in reality, it's all good for baseball to keep people talking and interested in the sport.
(This is way better than using "All About That Bass" and lip-synching World Series players.)
And it's REALLY good for us.
I mean, it'll probably never happen, right?
It would be impossibly cool to have him in the Cubs' dugout.
I thought from the get-go that Rick Renteria was managing the Cubs as a sort of taking-up-timer guy while the team grows and assembles.
I also think that overall Renteria has done a pretty good job.
But after the bum's rush Cub's upper management gave Dale Sveum, I figured whoever was next (unless they'd gotten Girardi) would have a limited shelf life.
And maybe this is... time's up, dude.
How about Dale Sveum anyway?
He looks pretty good in that Kansas City dugout, thinking about the ring he might get.

Anyway, if this could somehow happen I'd be ecstatic.
Just a rumor now, though.

And now... we should all be talking about what an INCREDIBLE game it was last night - what an absolute joy it is watching the gloves on these two teams, how freaking amazing the Royals' bullpen is...
Can you imagine the confidence you'd feel if you were Kelvin Herrera?
Jeremy Guthrie has pitched like a genius, but he gives up a single and a double and the Giants score their first run...
Ned Yost brings you in and you throw 4 straight balls...
He walks out to the mound and doesn't take you out, instead he talks about what to do with the next batter.
And when you get through the inning, he even has you bat (EVEN though from watching you swing it's possible you've never actually batted in your life).
So you can pitch the next inning, walk Pence, strike out Belt and then get lifted for a ROOKIE (Brandon Finnegan) who gets the next two outs.
Crazy stuff.
Royals up 2 games to 1 after taking this one in San Francisco 3-2.
Entertaining beyond belief. 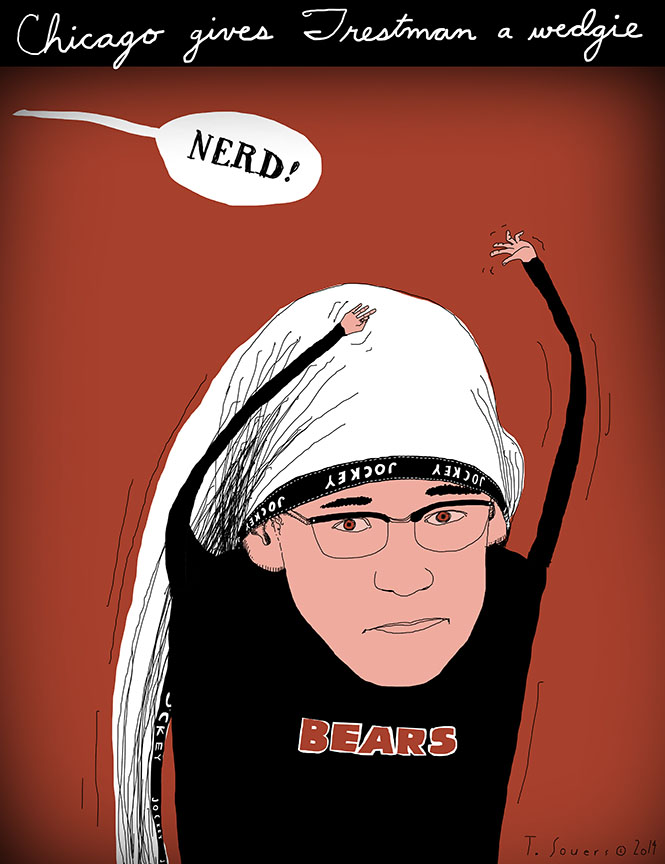 Well, he IS an odd guy, our Marc Trestman.
A skinny necked bad hair new-agey offensive guru guy brought here to Chicago, the City of Big Shoulders.
I mean, I'm still trying to buy into this new kind of defense-second Bears team... what choice do I have?
I read somewhere that Jay Cutler, with his massive contract, is the new Alfonso Soriano.
What did I ever get to do about Soriano?
Nothin'.
The Bears payed a crapload of money to change.
And change's main ingredients would be a new GM (which... I'll never dislike anyone as much as Jerry Angelo in that job), a new coach, and a franchise qb.
And while most (at least I think it was most) Bear fans really liked the signing of Trestman... he's really a nerd, right?
Brainiac.
Weirdo.

But at first that really played well.
You saw possibility.
You saw... long passes.. like... other teams with... real offenses.
You saw... something smart happen in the locker room at the half: the Bears...made an adjustment and it worked!
Now?
I had to spend a bunch of time driving yesterday, and I was listening to sportstalk, which is where you reaaaallly get that Trestman has turned into a huge punchline.
The Score played some of his quotes that were both hilarious and horrifying.
It's so classic Chicago with pretty much anybody in sports - soon as you don't live up to expectations, man, it's right back to high school and here come those big seniors gonna pull your underwear up over your head and you can't fight back or it just gets worse.

Welll, that's what they do here
Me included.

But what I really hope is that these guys figure it out.
That's what I'm waiting for.
Aren't you haunted by Aaron Rogers' "Relax" quote?
And then... the Packers figured it out.

WHY CAN'T MY FAVORITE TEAM DO THAT?

HEY TRESTMAN, UNTIL YOU FIGURE IT OUT, PLAN ON A WEDGIE EVERY TIME WE SEE YOU IN THE HALL.