« Easy to spot Cub Fans today. They're all smiling. | Main | And thus the phrase "A Double Javy" was born. » 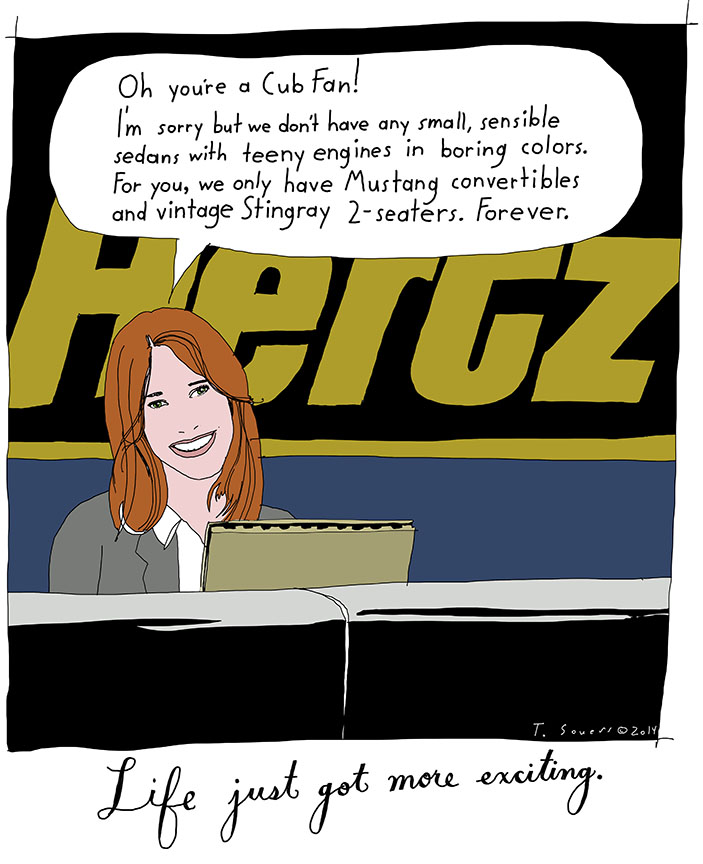 Now, I don't want to make comparisons with other impact players on other teams who come up and make the world go all goofy with adoration and anticipation, but now that Javier Baez is actually on the Cubs playing 2nd base and in the lineup every day... our world just changed.
We're driving sports cars to the coolest nightclubs and being seated behind the purple velvet ropes at the nice tables next to celebs drinking Dom and when we order Old Style instead we're surprised to hear Jay Z say hey man, I'll have what they're having.
They're putting up a massive black and white photos of a shirtless Harry Caray in the lobbies of the 4 Seasons.
Terminal 5 at Heathrow is selling Cub hats.
The Black Keys wanna play the Cubs Convention but Mr. Ricketts says, "Only if Len can sit in."
When we go to the pool, we're in the cabana with Kate Upton and Ryan Gosling even though it's awkward because our t-shirts have holes and say "Left Field Sucks".

But we'll get used to this, I promise.

I thought all we were gonna get was the bases loaded opposite field line drive that was caught but damn near over Brandon Barnes' head.
Then it went into extras and sure enough, young Javier Baez, the newest Cub and first of the really big name prospects, hit one out.
Praise the Baseball Gods.
I went to bed thinking oh my.
It actually, really truly, has begun.

The kid goes 0 for 5 with 3 strikeouts. Then he comes up and wins the game with the long ball. Afterward the kid says (paraphrasing) "...no, I wasn't nervous. It was kinda like a spring training game with a big crowd and all".

He's just a kid. The first of several. Get ready fans. Get ready MLB. It has begun.

It's gonna be fun.

Baez did OK Thursday night, too!

I remember my nephew (a White Sox fan) being in awe of the Cubs pitching (Wood, Prior, Z...). I can't wait until he is in awe of the entire team!

It will be nice to get some respect!