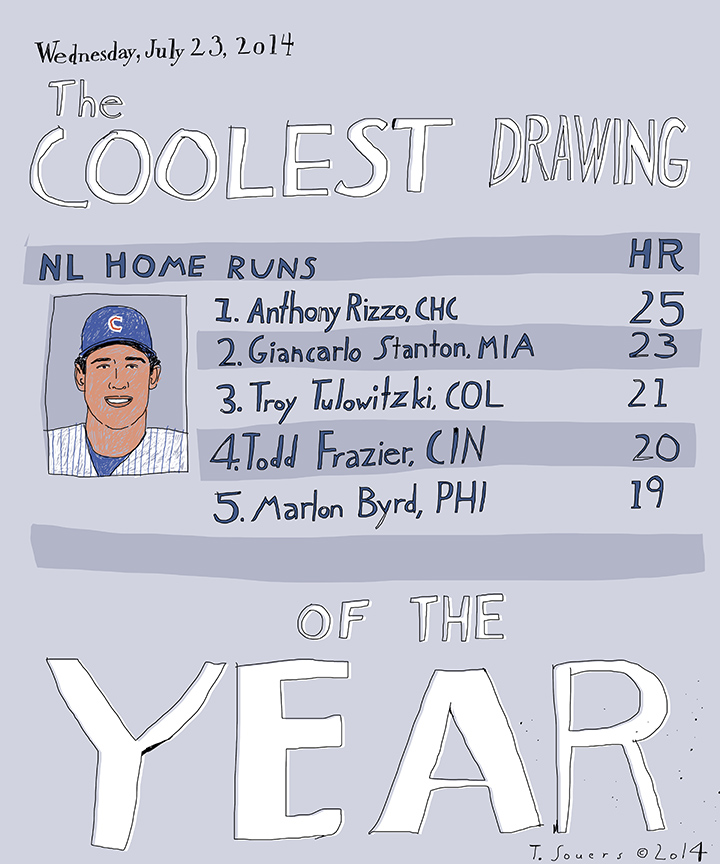 It's not that often we get to puff out our chests and brag about the Cubs, is it?
Anthony Rizzo hit a couple dingers yesterday and took over the NL lead with his 25th.
That's 2 more than he hit all last year, which was 8 more than the 15 he hit the year before.
With 62 games to go, you might say Mr. Rizzo is kind of exponential.
He's also hit 5 home runs in his last 15 at bats, which indicates he's "hot" and "seeing the ball well".
So for instance you'd hate to be Ian Kennedy, who's starting for the Padres when they play our favorite team tonight.
In the back of our collective minds, we've all been hoping that if Theo Epstein and Jed Hoyer's vision comes true, then we'll get to meet the vast majority of the guys on the team as rookies. And the joy we'll experience at watching them grow will be unlike any other team we'll have experienced, maybe in any sport.
With Rizzo's development and the jettisoning of Darwin Barney yesterday, that vision comes a step closer.
Here's a screengrab of the Cubs' depth chart from July 21, 2012. 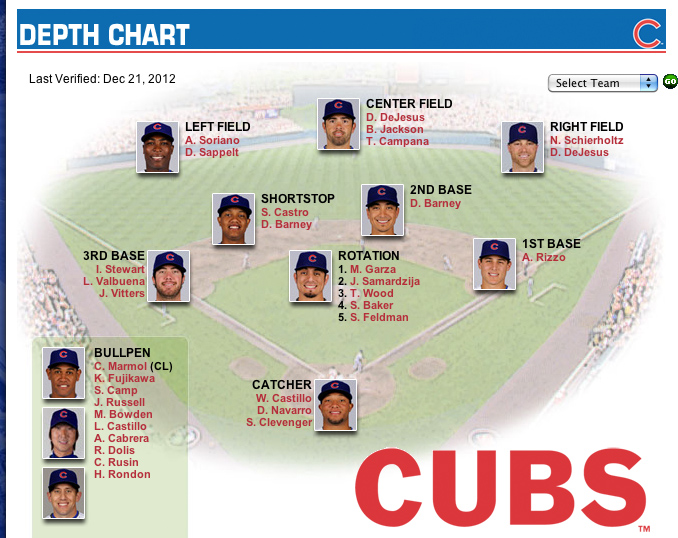 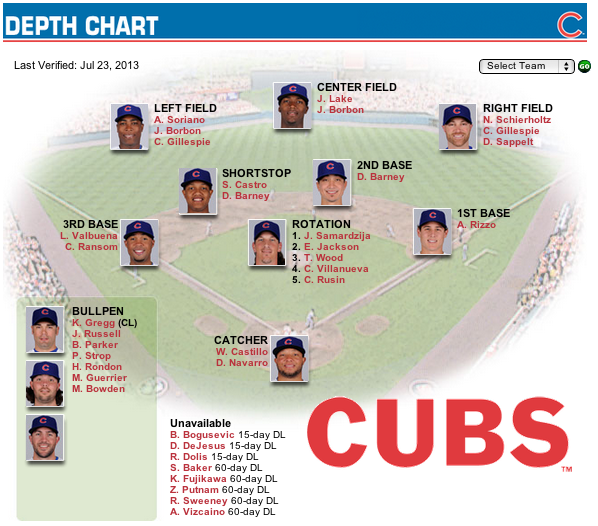 Here's one from today: 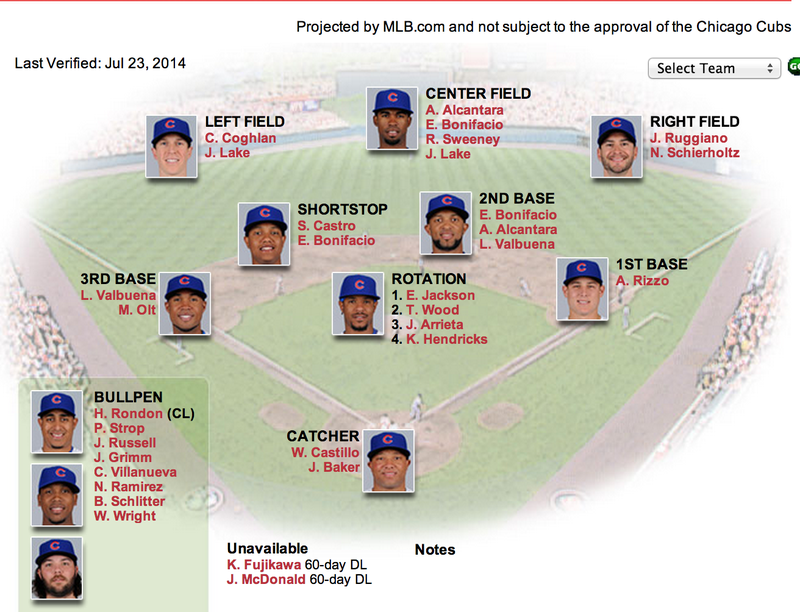 Man, you switch out just 2 more photos - Baez for Bonifacio (we've all been buzzing about him playing 2nd in Iowa), and Bryant for either Coghlan or Ruggiano?
That is HUMENDOUS CHANGE with mind blowing potential.
And I'm still light years from giving up on Mike Olt.

It's a crazy cool time in Cub history.
Imagine the day when that little HR leader chart I drew up top has 3 Cubs in it.
Okay my eyes just rolled back into my head and I made duck noises for 37 seconds.

Gotta go, but I also have to say this.
Darwin Barney was a Gold Glover we all rooted for and really liked as just a guy.
But he was incomplete.
Our expectations for Cub players should be more than that.
I'm not trying to be mean or cold, it's just progress.
That said, here are some of my favorite Darwin Barney illustrations. 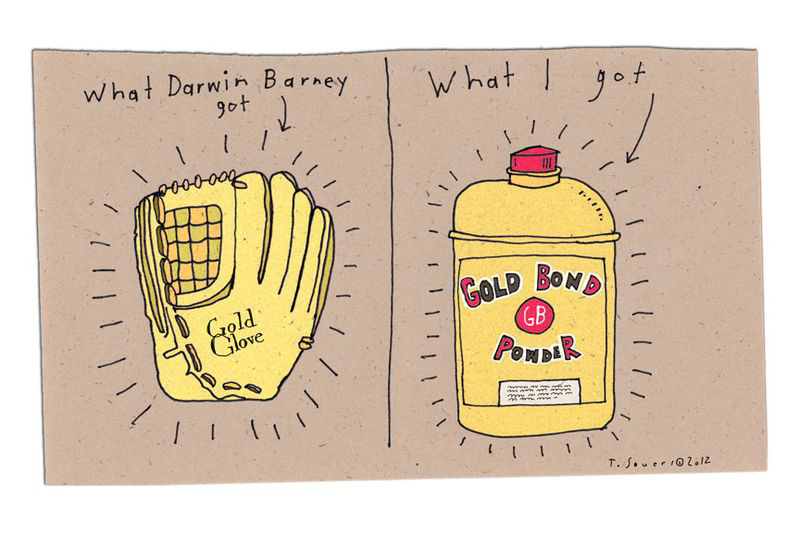 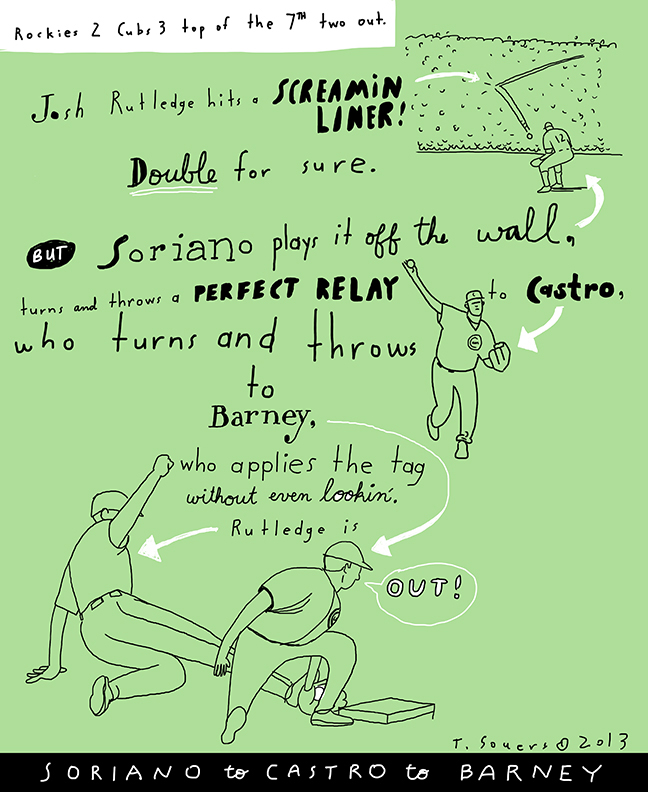 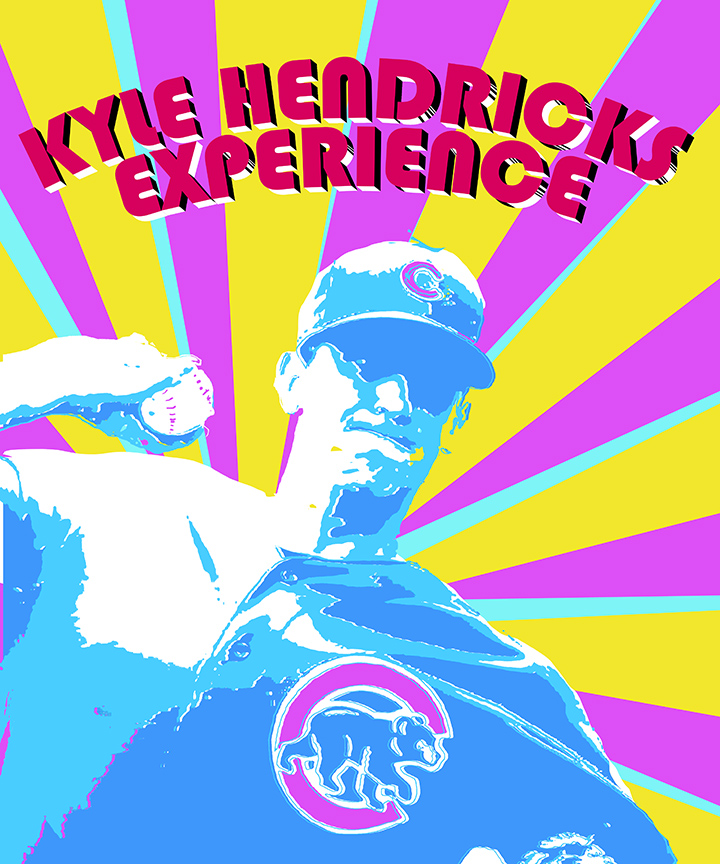 Well, this will be at least one compelling story for the rest of the season (I hope).
And that's to watch young Kyle Hendricks gain experience.
Pretty awful ode to a 60's psychadelic Jimi Hendrix poster, but there you have it.
The photo is from Al Behrman, the guy who shot the one on this page (thanks, Al!).

Tonight it's Hendricks and our very own Monster in the Making Anthony Rizzo (tied for first in the NL for homers with Giancarlo Stanton) vs 3-11 Padre starter Eric Stultz.
So lets hope Kyle can get a W and begin the confidence-building process! 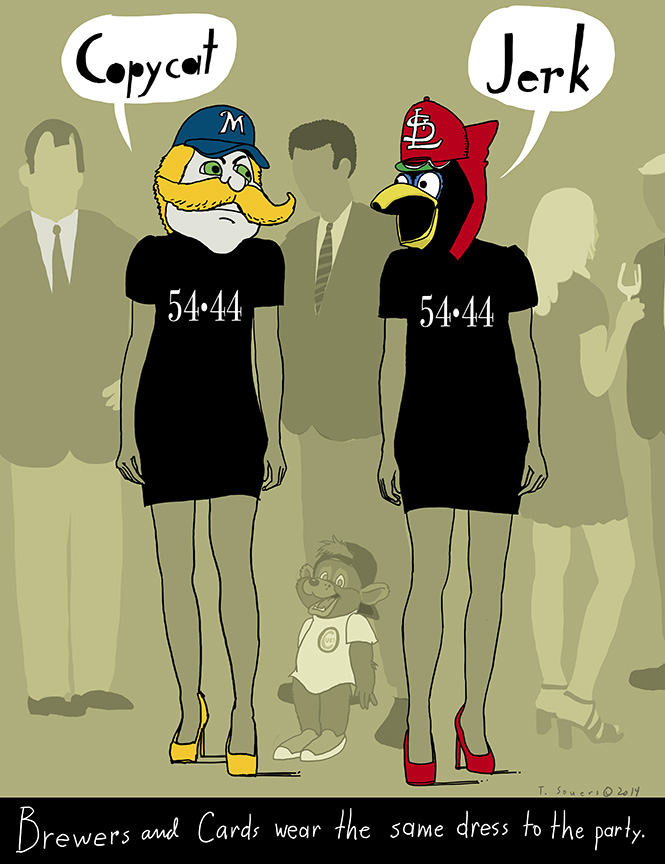 Kind of interesting in the NL Central right after the All-Star break.
Brewers and Cards tied at 54-44, then the Reds and Pirates tied at 51-46.
2.5 games out.
That's pretty tight, and while there aren't alot of good choices to pull for here, I'm pretty glad Milwuakee isn't running away with it.

And then at the bottom is our same old irrelevant story...
But one day...

In the meantime the Cubs lost badly last night to the Diamondbacks, who... I looked at the MLB injury page and man those guys are beat up. 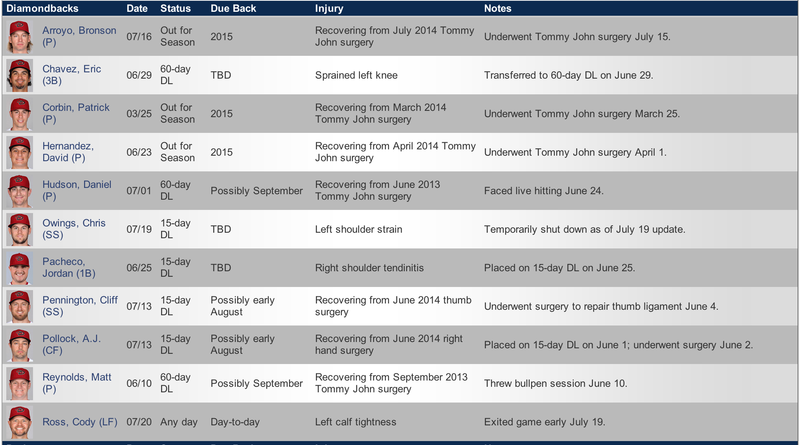 Of all the years that you sort of really wouldn't be bothered by injury, why this one, Cubs?

Here's hoping that when it counts, the Cubs can keep relatively healthy and... maybe they'll be like the Cards who seem to always have some incredibly awesome guy come up to replace an injured player.

You know what yesterday was?
A perfect day to smoke a giant pork shoulder.
It's so easy.
Go to the store and ask the butcher for about an 8 pound shoulder (bone in) and leave the fat on top.
Mix up some dry rub - 1/4 cup of: black pepper, paprika, brown sugar. 2 Tblspoons salt and dry mustard. 1 Tblspoon cayenne.
Rub it all over the shoulder (I never plan these things so you're supposed to let it sit overnight but I did it right beforehand). 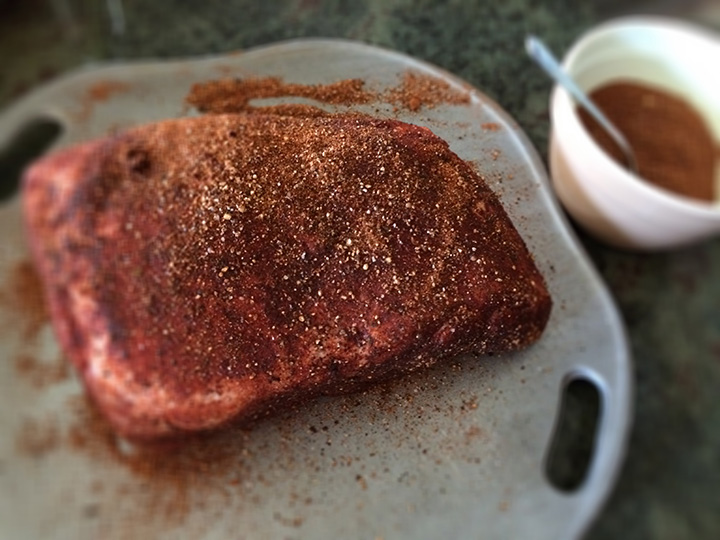 Do the fire on both sides of the grill, put a pan of water in the bottom to keep the heat moist, and soak a bunch of wood chips. 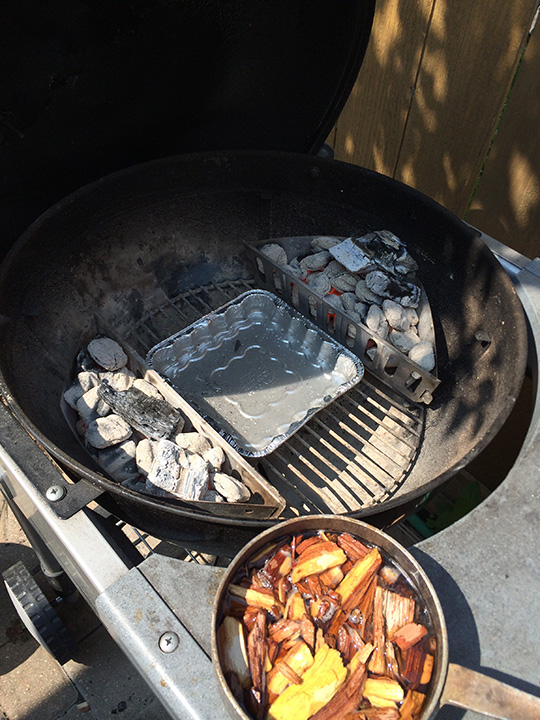 Put the thing on. 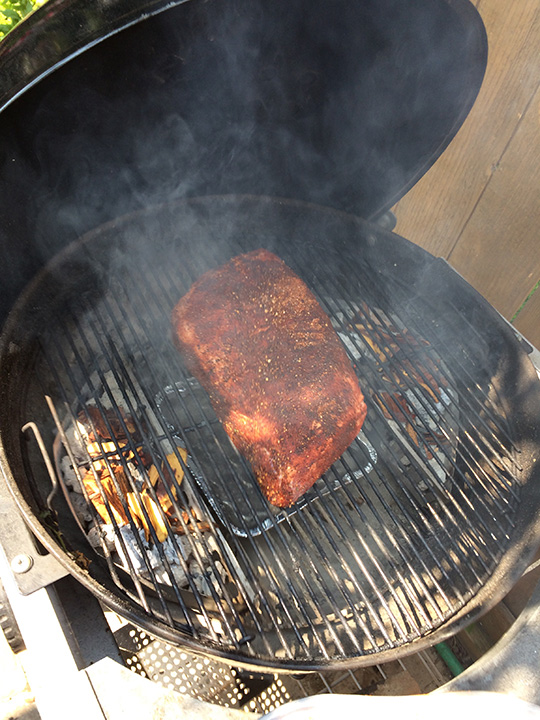 About every hour, open it up and add about 10 hot coals per side (I just keep my portable grill on the ground and light a charcoal chimney with 20 coals about 25 minutes before the next hour). And put on a fresh layer of soaked wood chips. 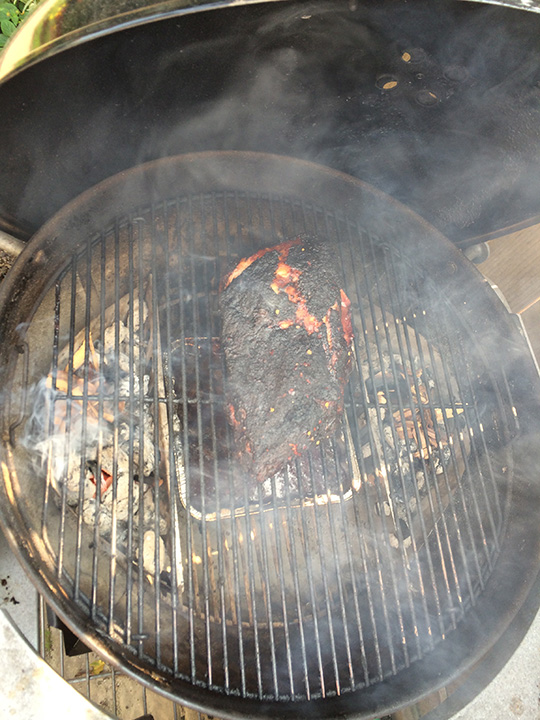 In the cook book, it says 4-6 hours. This one took about 4 1/2.
So in the meantime, I mixed up some North Carolina Vinegar (BBQ) sauce.
2 Cups cider vinegar, 1 1/3 cup water, 2/3 cup ketchup, 1/4 cup brown sugar, 5 tspoons salt, 4 tspoons red pepper flakes, couple tspoons of black pepper.
You'll have quite a bit of sauce, and you can now make the GREATEST cole slaw.
Chop up a head of cabbage and add a cup of the vinegar sauce.
Done. 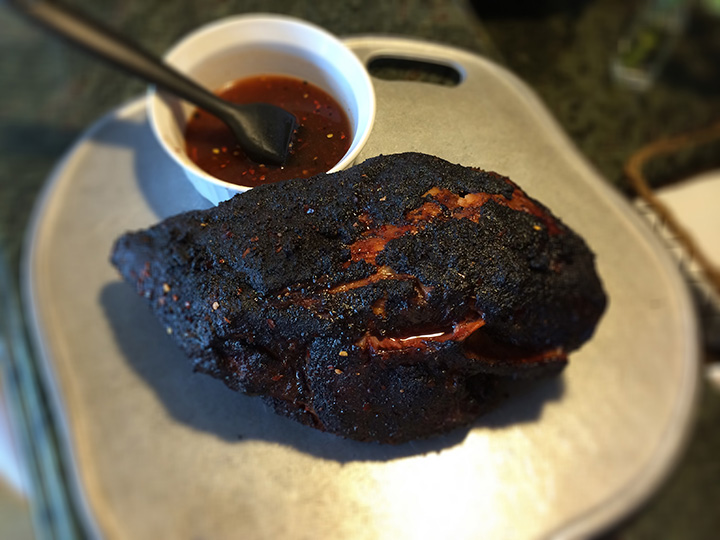 Then when your pork is done, you pull off most of the black crust and the fat on top will be sort of jelly like underneath, so you scrape that off.
They always say to use a fork and scrape with the grain of the meat and you'll have "pulled" pork.
And I do that til my hand turns numb, then I get out a big knife and chop up the rest.
Put it in a big glass baking dish or something and pour the rest of the vinegar sauce on top.
Mix it up.
I didn't take a pic of the sandwich, but you put a bunch of the barbecue on some good bread, and a heap of the slaw on top of that and man, that is some spicy victory.

Recipes are out of The Barbecue Bible by Steven Raichlen and Smoke and Spice by Cheryl Alters Jamison and Bill Jamison.

Chocolate, Strawberry, and Villanueva. The Cubs' buried 3rd base prospect. 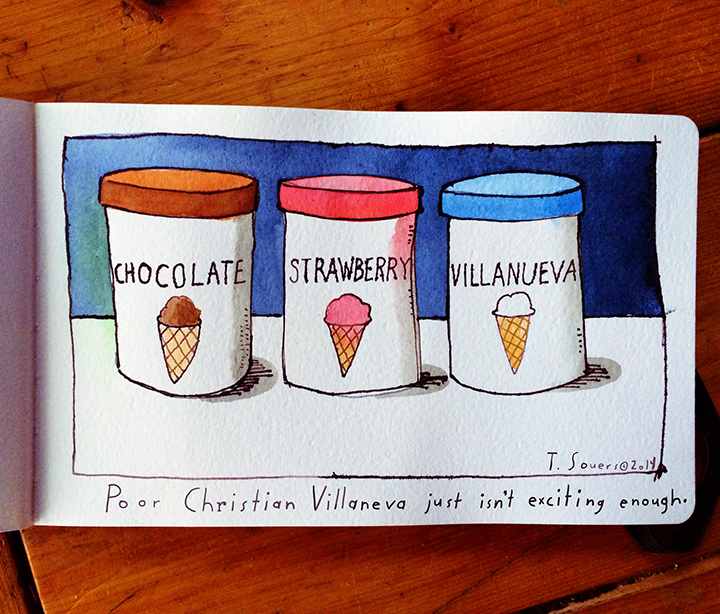 What a drag for him, stuck back behind all the other talented 3rd base prospects.
Years ago, Christian Villanueva coulda been at least a Cubs Convention big wig.
But now?
Just kinda vanilla.
In yesterday's Baseball Perspectus Minor League Update, they mention all the home runs hit by Cubs prospects the night before: Bryant, Baez, Russel, Soler, and Vogelbach.
And left Villanueva off the list, even though he hit one too (off the awesomely named Tommy Toledo).
I hope something good happens for him some day.

In the meantime, Anthony Rizzo came out swinging against the Diamondbacks last night, hitting a couple gigantic 450 footers.
But the rest of the Cubs could only come up with 4 other hits and lost 4-5.
Still, pretty nice to turn on the tube and watch a game.

Tonight's late one will have Travis Wood trying to recapture his mojo which seems about a foot out of reach lately.
Go Cubs.

Is Theo Epstein repeating the only really good Chicago Cubs history in history? 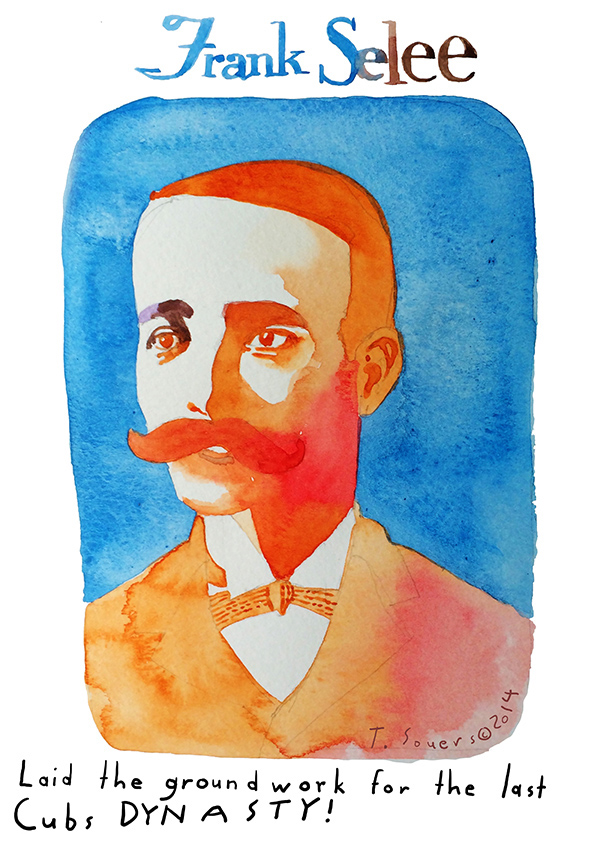 The last time the Cubs did a massive, complete team rebuild that resulted in a World Series winning dynasty started right at the beginning of the 20th century with a guy who, like Theo Epstein, came to Chicago after having major success in Boston.
The circumstances were far different, but the story is pretty similar.
While I oversimplify because I'm simple, I pretty much got all this history stuff from Glenn Stout’s The Cubs published in 2007. A really gorgeous book filled with awesome stories and incredible photos selected and edited by Richard A. Johnson. (As a card-carrying Cub Fan, you should own this book.)

Anyway, 1900 was the last year the National League was the only pro baseball league.
Here were the final standings that year (screengrabs from ESPN). 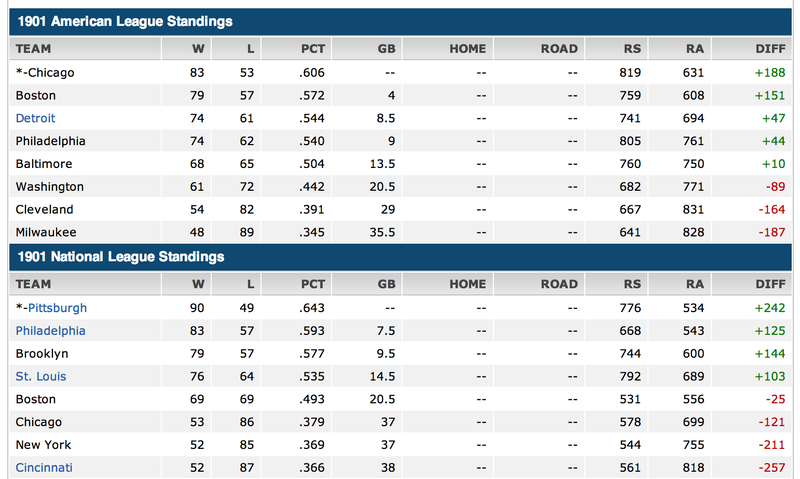 What happened?
Well, the National League owners didn't believe the American League could even start up, but then these American League guys offered much bigger salaries so...duh.
A bunch of the NL’s stars began jumping to American League teams.
Back then the Cubs were called the Orphans, and it happened to them, too.

Team names - I’m kind of unclear on how exactly this worked, but I guess it was up to the press to select “nicknames” for teams back then.
Now that there were so few Orphans left, the press started calling the team “The Remnants”.
Basically a team with little talent or future.
Bare cupboard.
Sound familiar?
So the Remnants hired the recently fired Beaneater manager from Boston, Frank Selee.

He (from the book) “...had a record of performance that was beyond reproach. Chicago’s horrible record in 1901 gave him carte blanche to make changes in 1902.”

If you were a manager back then, you were also kind of the general manager because you put the team together.

He made so many changes that the press decided to give the team a new nickname.

(Again, from the book) On March 27, an anonymous reporter from the Chicago Daily News anointed the club with a new name when he wrote: “Frank Selee will devote his strongest efforts on the teamwork of the new Cubs this year.”

“Cub” was what you called a young ballplayer back then - it was just a regular term.
But when it was capitalized (maybe by accident) in the paper, people thought it was the new nickname, and it stuck.

So that all started with Frank Selee's rebuild.
Sorting through a ton of kids to create a new team.

Are we watching history repeat itself?

I don’t know, but next year it’ll be 4 years after Theo Epstein started.

Maybe 2015 will be like 1906.
Maybe we'll see the word "force" in the same sentence as "Cubs".
Maybe a World Series is closer than... GOOD GOD I'M GETTING SO AHEAD OF MYSELF!
No way in hell it happens next year, but...
Anyway, cue dramatic music, and I gotta go.

I don't know about you, but the home run derby held little interest for me this year.
The amazing thing happened the day before.
At the All Star Futures Game.
I could go on about how cheesy and just overall bad the actual production was (how many lame interviews can one game have while the game is going on?), but when Javier Baez actually went with the pitch - a curve or some kind of breaking ball - and knocked it out to right center?
Amazing.
That was the first time I'd seen him live, and it was the opposite of Cub Dissappointment.
That really was the future.
And it happens really really fast.
As in freaky bat speed fast.
They were already making stars out of Kris Bryant and his buddy Joey Gallo, which was fun to see.
Bryant is going to be a superstar, even if he struck out twice here.
But Baez delivered just what everyone hoped - a massive dinger that went out in a couple seconds.
I use "awesome" all the time which diminishes it's power.
Baez was awesome in the actual weight of what that word is supposed to mean.