The minty taste of Victory, (maybe) coming to Wrigley Field in 2015. 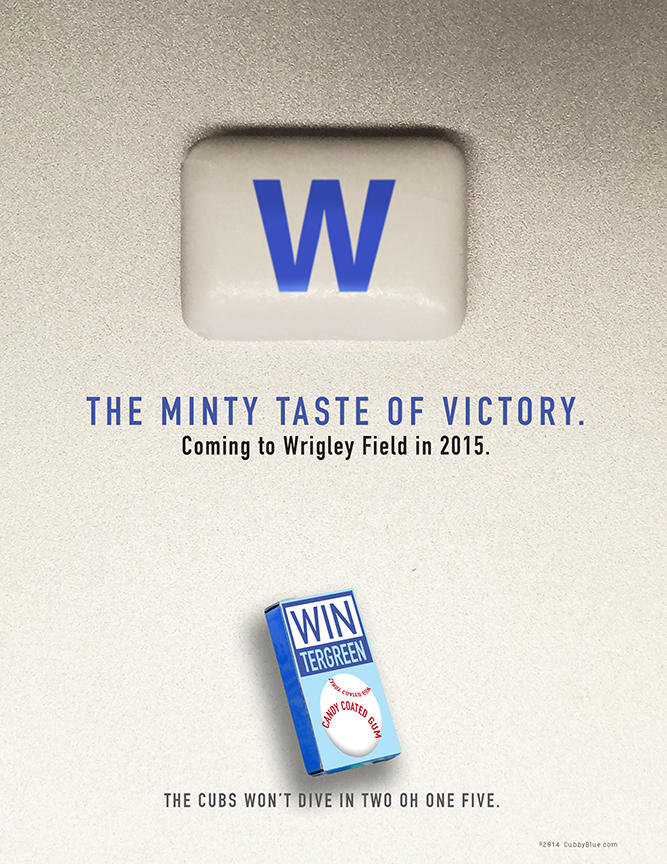 I have no idea what's going to happen next year.
But I'm fairly certain that early in the season the lineup will have Starlin Castro, Anthony Rizzo, and Kris Bryant.
That's not a whole team by any stretch, but those guys together sort of makes me go...hmmm.
Next year, now there's no way anybody's thinking about actually winning winning, but...hmmm.
If Theo Epstein has sort of... the Cubs have been like watching the pot of water, and next year I'd say it'll start to boil.
Who knows - Baez...Alcantara...Vizcaino... some of those guys might bubble up.
Maybe the headlines in July 2015 won't be about who the Cubs can get for some guy Chris Bosio polished into something new and shiny.
Mabye it'll be more about "gelling" and "nucleus" and stuff like that.
It's up to the kids, really.
Anyway, somebody gave me a chiclet the other day and I looked at it and thought man... wouldn't be hard to put a little blue W on there, would it?
So I took a photo and photoshopped it into an ad.
Wouldn't it be nice, when you're walking out of Wrigley after another Cub victory, somebody could hand you a little pack?
It almost makes sense at Wrigley Field, right? 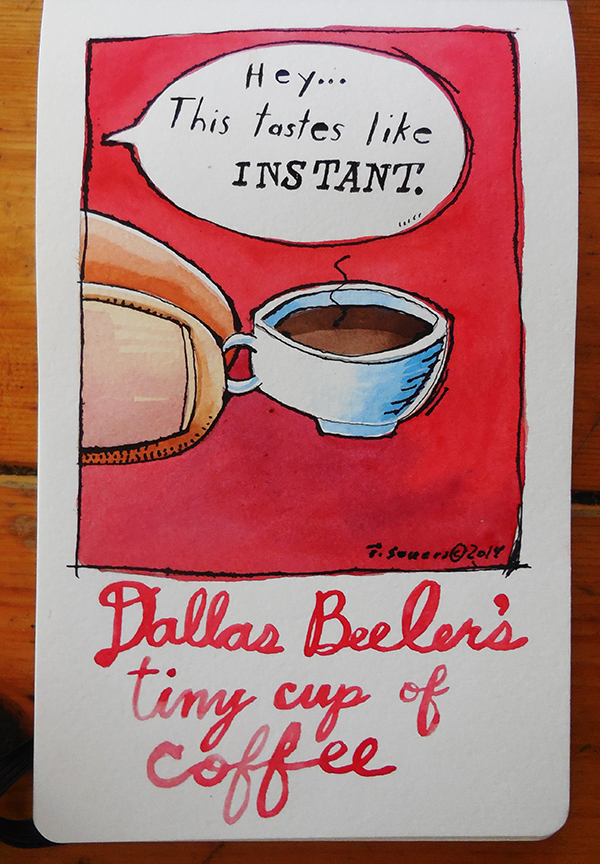 I heard on the radio that Cubs management was pretty firm with rookie pitcher and 26th man Dallas Beeler. No matter what his performance - a no-hitter or he gets knocked out in the first - he was heading back to Iowa after the game.
As cups of coffee go, that's a small cup of instant, really.
So it was nice that he pitched well.
Actually, really well except for the 3 walks (and who knows - maybe after these July trades he'll come up and get to work with Chris Bosio, who really seems to be doing an awesome job).
6 strike outs, 4 hits and 1 unearned run in 6 innings - I'd take that in my first game ever in the bigs..
Plus he hit a single his first time up.
Pretty exciting.
But the Nationals had recovering Gio Gonzalez on the mound, and he only gave up 2 hits.
Nats 3 Cubs zeero.

Game 2 was a 2-7 loss with a big rain delay.
After about an hour of that, Jeff Samardzija stayed in the game and got smacked around a little with 2 outs - 3 straight singles with a guy on and scored 2 of their 5 earned off him.

And no game today - it's the Pride Parade and that's expected to draw a million participants.
Beeler's probably in a car right now, heading back.
I wonder if they gave him a driver...

Cubs, Nationals in the fog. Junior Lake's scary collision with a door. (gif)

What a weird and yet cool game.
It's nearly the end of June, yet there's this freaky fog hanging around Chicago.
If you look in last night's box score, in the bottom of the 6th you'll see that Luis Valbuena hit a triple.
But what really happened was he hit a sky high fly ball into the fog, and Nationals center fielder Jason Werth (edit, that's CF Denard Span. DOH!) never saw it.
He stood in place and then kinda... got out of the way moving to his left, but the ball actually dropped out of the fog on his right.
The Junior Lake play that I'm making light of was actually really really scary.
He crashed into one of those doors in the ivy.
If you were in his control room, you'd have heard the Captain screaming into the radio: "ABORT ABORT! WALL DEAD AHEAD!"
I thought busted knee or a concussion or something.
But after laying on the ground for a long time, and doctors and trainers visiting he popped up and smiled.
Hope he's really okay - I bet he's sore today.

The Cubs won 5-3, and if you're not watching the games you are totally missing out on Anthony Rizzo at the top of his game.
I mean, he's been unbelievable.
Last night he went 3 for 4 with a double, and his .934 OPS leads all NL 1st basemen.

Anyway, the fog is still here this morning... 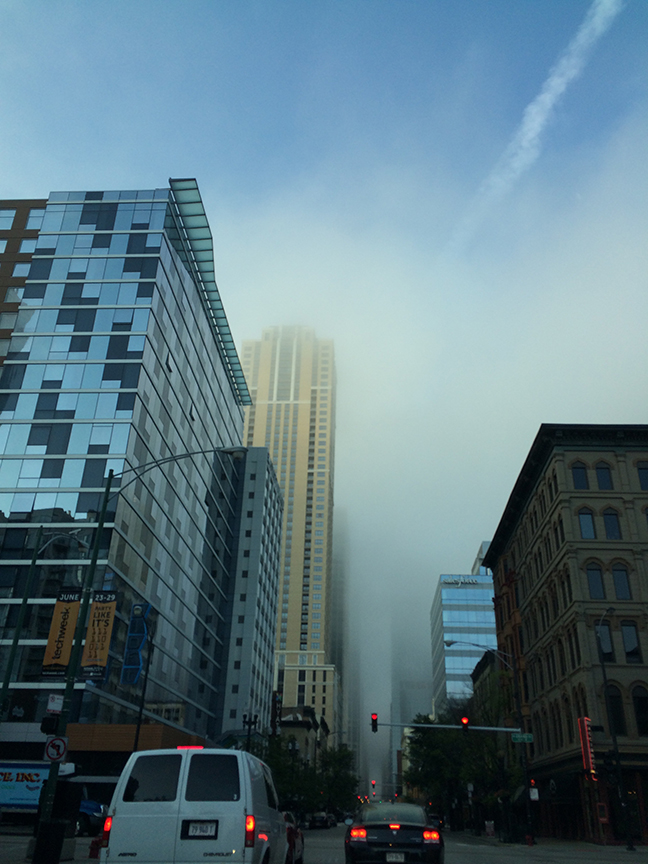 and today's game starts late afternoon.
If it's still there, it'll look like a cloud on the field. 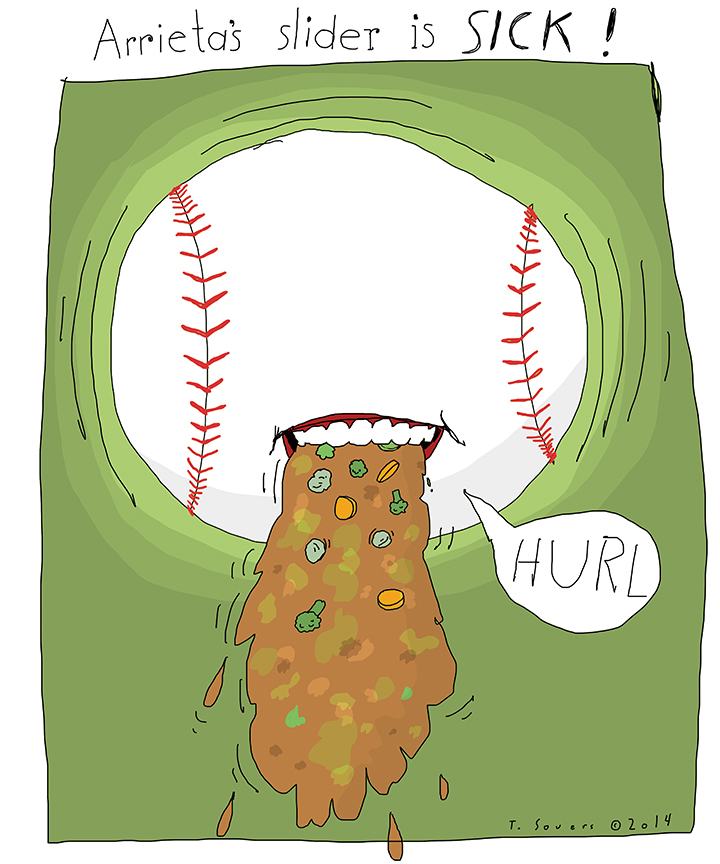 No time for story today, but what a performance by Jake Arrieta yesterday!
Go Cubs!

I give you: The Cubs Dreamcatcher. 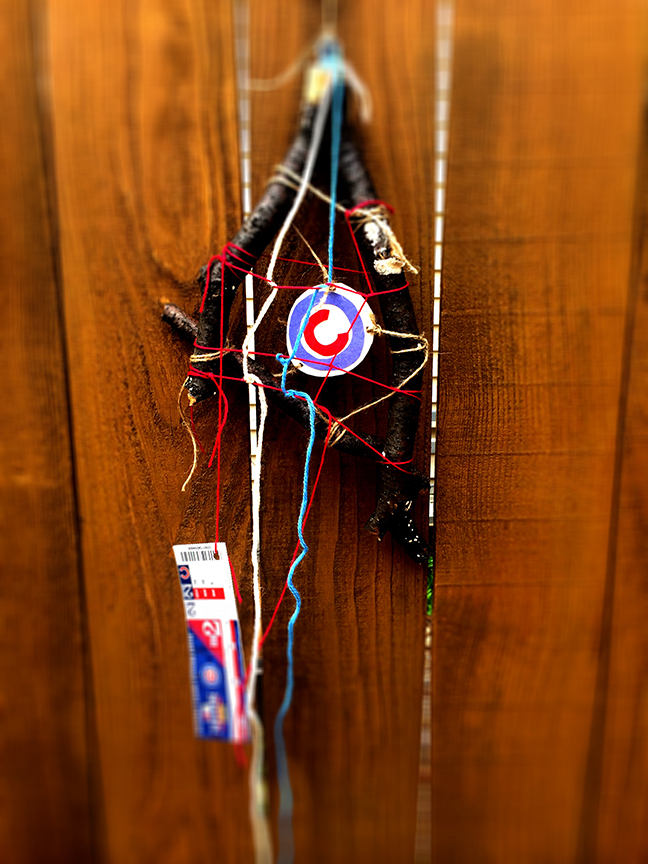 I used to live in Arizona and saw these things all the time.
The dreamcatcher.
Not really sure why, but the idea of a Cubs Dreamcatcher cracked me up so I spent a little time with some glue and string and branches and a power drill.
And then some special stuff like my ticket from game 2 of the 2008 NLDS - the one where Mark DeRosa, Ryan Theriot, Aramis Ramirez AND Derrek Lee all made errors.
In one game.
With Carlos Zambrano on the mound.
It was perhaps the only time that Big Z came off as a sympathetic character in the long, drawn out drama of our favorite team.
I can remember him still, standing on the mound and looking out into the crowd, eyes pleading.
Anyway, that ticket stub is pretty special with meaning.
But I think I still need more stuff.
A yellow chunk of Bleacher Bum construction helmet from '69, a lock of hair from Marla Collins, some fur from a black cat, half a Bison Dog, maybe a Harry Carey bobblehead head, a goat horn, some ivy... um... an Old Style, a Beanie Baby giveaway, some skin from a Kerry Wood blister, a Don Young baseball card, a diploma from the College of Coaches, and one of Steve Garvey's molars.
That should do it.
Then, this thing might actually catch a dream.
A dream of a million crazy-happy Cub Fans wandering around a closed off Clark Street.
A dream where my dad is crying tears of joy way out in Arizona.
A dream of World Series glory.

Oh well, in the meantime there's the current team doing their best.
And kids in the minors - Kris Bryant (2 more homers) and Javier Baez in the same lineup is prettty cool.

Cubs lose 2 of 3 to the Pirates, and now the 37-37 Reds come to town for 3 games which reminds me that, even though he's no longer the skipper there, we should also get a Dusty Baker toothpick for the Cubs Dreamcatcher...

Lastly, if you're offended by me joking about a dreamcatcher please know that I'm just having fun, and while I have the utmost respect for Native American culture, the Cubs are... a ways off in the respect department.

I can't remember what radio station it was, but sometime last week I was driving home from work and Theo Epstein was being interviewed - I always like listening to that guy especially in this crazy Chicago traffic.
Anyway, he's talking about Kris Bryant (might be promoted to AAA) and the delays at Wrigley (I don't really pay attention to stuff that doesn't happen on the field), and when he was talking about this current Cub team he said something like, "If you're another team, the Cubs aren't very much fun to play right now."
I thought, well how self serving that statement is.
But this morning I counted the wins and losses in June.
11 wins and 7 losses.
I'm not going to go searching back in time, but this is at least as good a little stretch as any Cub team has had in years.
After yesterday's game, Anthony Rizzo said, "This is the nicest I've felt about this team since I've been here."
Makes me feel a little unusual in a good way.
I mean yeah I know we're not supposed to care about wins and losses, but doesn't this June make your summer just a little bit nicer?
Okay, a lot?
I agree.
Starlin Castro hit a 3 run homer yesterday.
That's 1 more homer than all of last year, and he could break his personal best (14) before June is out.
People who don't live in Chicago are starting to notice and say nice things about him again.
For shortstops, his OPS is 2nd in the NL behind Troy Tulawitski, who is just a different kind of special.
Cub relievers kept Andrew McCutchen off the bases after taking over for Jackson.
Chris Coghlan had a triple and a double - his BA was below Mendoza I think less than a week ago.
Anyway, I'm going to say it - the Cubs are kind of fun to watch right now.
Probably this won't last and surely trades will happen in July, but it's nice that Rizzo and Castro can feel what it's like to win a little bit.
I'm so watching today, the only day that the 7 eleven painting will work.
Go Cubs.