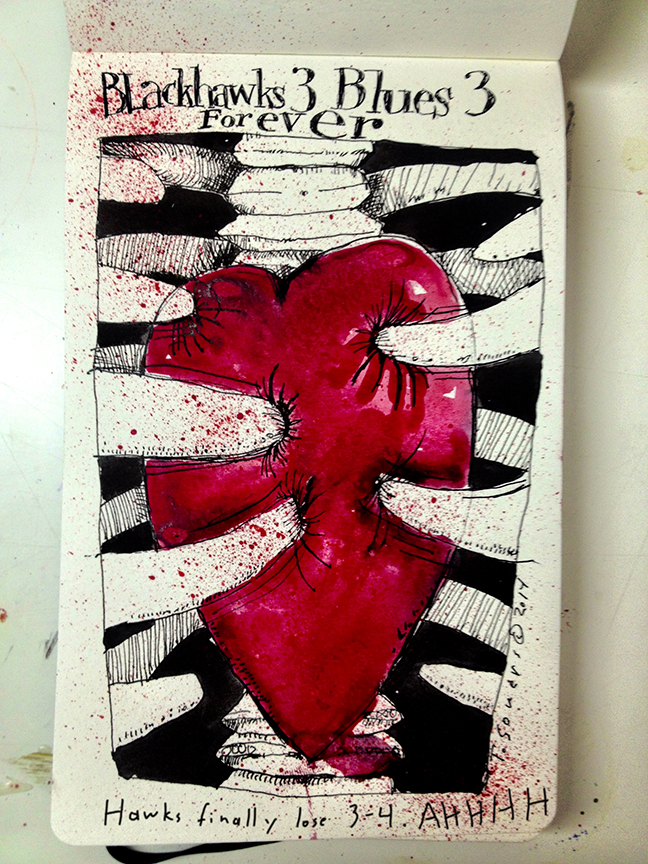 Well, the company I do my blog through, Typepad, was down or something this morning.
So I had this painting and a story, but it all went poof.
I mean,the painting didn't but all the words did, and sorry I don't have time to re-do.

Anyway, did this painting between the 2nd and 3rd overtime.
I'm sure you know by now that the Blackhawks lost to the Blues 3-4 in the 101st minute.
An awful loss.

What being a Cub Fan is like: WAITING IN LINE 3D GAME

Ahhh God!
Getting swept by the Yankees in one day sure sucks.
The Cubs haven't won a series in forever.
When will we be set free?
Nobody knows, but here's something you can do in the meantime.
Because if you're still a Cub Fan, you're sick like me and you'll find this hilarious.

A guy named Rajeev Basu created this "game", and it's perfect.
Well, it would be better if you could see that everybody in front of you was wearing a Cardinal shirt, or a Yankee shirt or whatever.
But it's a video game called "Waiting in Line 3-D".
You'll go there in a moment, hang on.
The concept is, well, to quote the creator: "The game isn't interesting, exciting or fun," the game's inventor, Rajeev Basu.

That's you, there on the left (these are screengrabs from the actual game - I took the liberty of pixelating a logo on your shirt).
You're stuck standing in line behind a bunch of people. 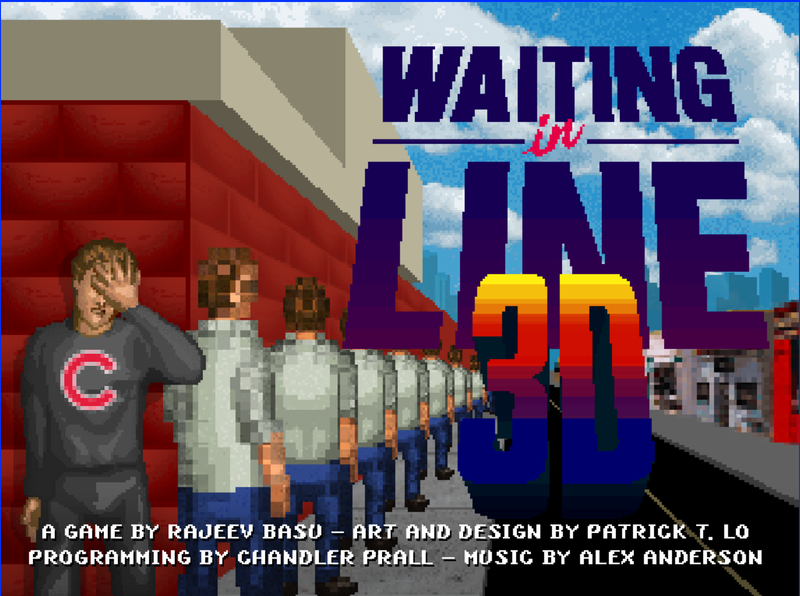 Here are the instructions. 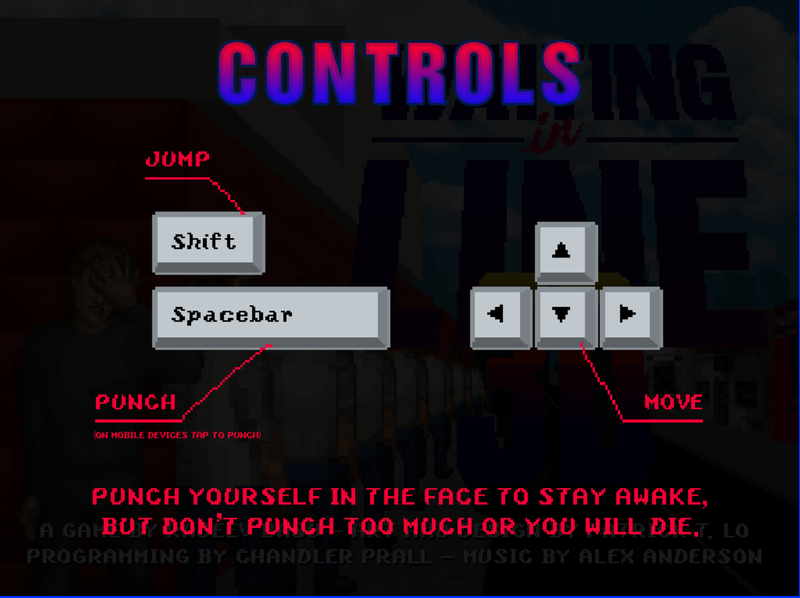 See how you can jump with the shift and move with the arrows?
Well, that's part of the genius of the game.
You'll see in a minute.
Here's what the game looks like when you're playing. 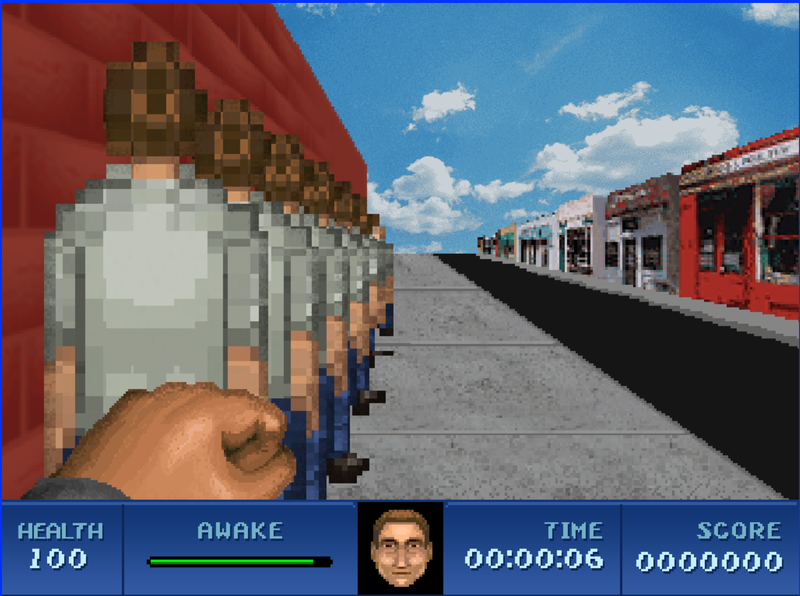 See the fist there on the left?
That's your fist.
You have to keep yourself awake with it...
You'll see - I promise you'll be laughing your FAO in 15 seconds.
Now go here, to "WAITING IN LINE 3D"


Well?
What did you think?
Worst game ever?
Yep.
Kind of a reflection of your baseball fan life right now?
Yep.

What would it be like to be Rick Renteria today? 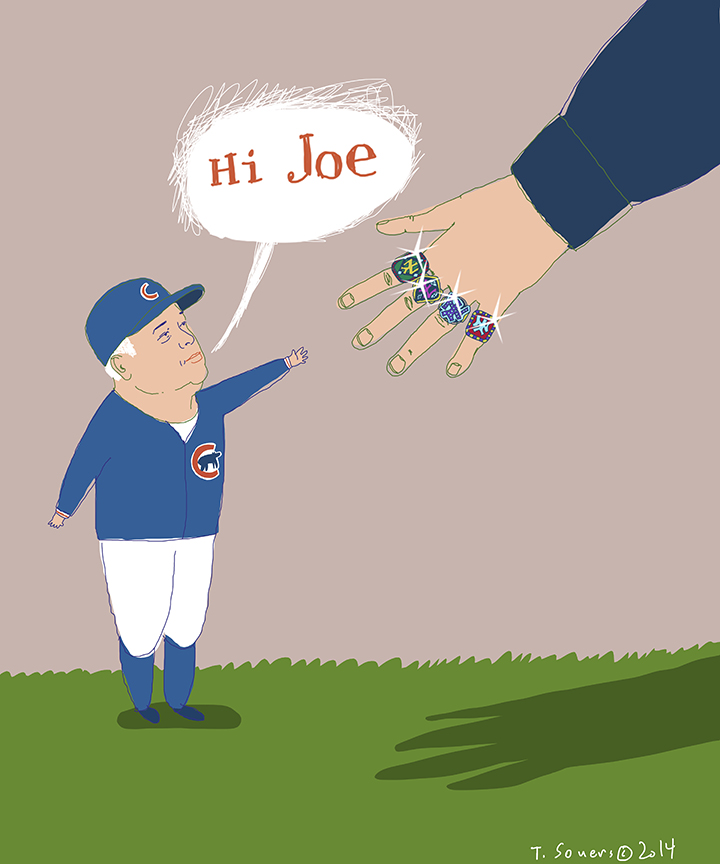 What would that be like?
You're Rick Renteria.
Going to New York for the first time as a real Big League manager.
And across the diamond is this other guy, Joe Girardi.
The guy everybody in Chicago wanted, back when Dale Sveum got the ax.
Intimidating?
Maybe.
I'd love to hear their brief "hello" when they come out with the lineup cards.
Even better to hear their thoughts.
Like, Girardi might think, "Poor guy."
While Renteria might think, "Douchebag. I'm gonna kick your ass."
Which is what I hope happens.
Big double header today.
Wood and Hammel on the same day.
Kinda cool.
Go Cubs.

Winning only one game per 3 game series, that isn't very good.
I'm pretty sure it's like losing two thirds of your games.
LIke if you had 3 furry pet bunny rabbits that you loved but 2 were actually cats, and you hated cats.
Or like if you had 3 arms and you mistakenly hugged a chainsaw and two arms got cut off, and you thought of your arms as games in a 3 game series.
Like that.

Out of that entire Cubs/Cardinal series, of which I got to watch exactly nothing( live), I have to say my favorite hightlight was watching Matt Holliday botch that one pop up.
Can't remember which game it was, but for all the superstar-ness around that guy, he sure looks awful once in awhile.
But that's just me being a jag.
There does seem to be some good stuff happening with the team, and even though we don't expect greatness, if they could just get their motor going a little more they might wreck other team's fun more often.
Starlin Castro and Anthony Rizzo have sure looked fantastic lately.
A combined 18 hits in their last 48 at bats.
That's something.
But I tell you what, Edwin Jackson should not ever say the word "rythm".
Like, "I feel like I've got my rythm."
Because "rythm" makes me think of dancing, and then I can only think that Edwin Jackson must be a terrible dancer because his pitching has had no rythm whatsoever.

Anyway, today the Cubs are out in New York City playing the Yankees and I'm getting ready to dislike.
Well except for the Jackie Robinson tribute day, which is awesome.
But today the Yanks will start that Masahiro Tanaka guy, the Japanese pitcher that caused all the angst among Cub Fans when we thought the Cubs were gonna get him somehow.
Today, how awesome would it be if he didn't just lose, but kind of stunk up the joint too.
And if the Cubs won.
That would be a trifecta - like going to the doctor after hugging a chainsaw and having 2 of your 3 arms sewn back on or something.
Whatever.
Go Cubs. 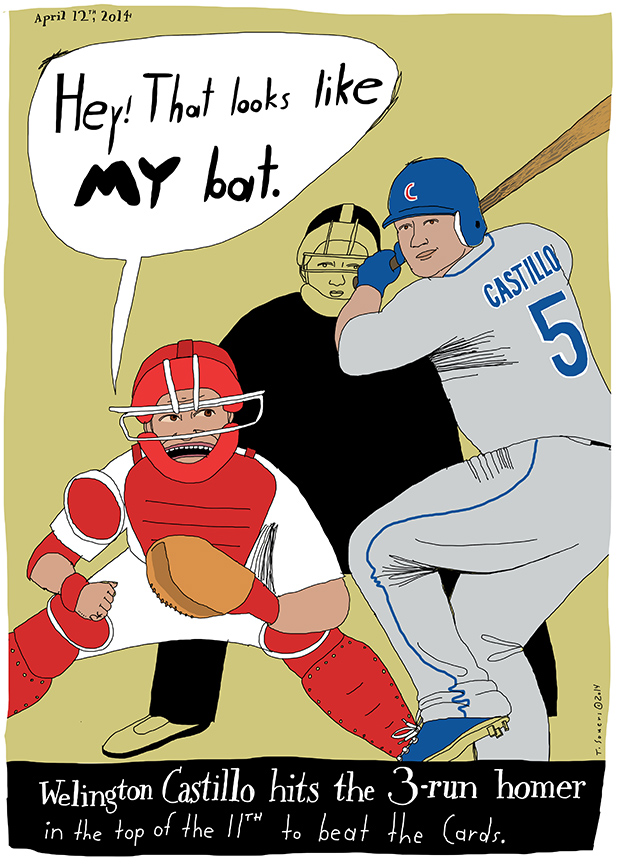 Well that was certainly a switch.
It seems like it's ALWAYS Yadiar Molina with the bat-heroics in a Cubs/Cardinals game.
How spectacularly awesome was it to have our own Welington Castillo turn on the fastball and win the game for the Cubs for a change?
He creamed it and the Cubs win 6-3 in an 11 inning game.
Sure I felt ill for Jeff Samardzija as he watched yet another chance at a win go out the window with a bullpen hack job, but man...a win over the Cardinals in extra innings in St. Louis trumps any bad feelings I had.

I'm in Los Angeles shooting some commercials.
And we were in some park set up literally 100 yards from this gigantic tower of satellite dishes and radar stuff, and yet could not get a G3 signal good enough to follow.
But I got a smart assed text from Cardinal Fan Dickie in St. Louis early in the game, and I asked him to keep me updated on the game with texts.
My favorite ones were these, and they're in sequence:
"F*cking matheny doesn't pinch hit for rosenthal w winning run @ 2nd in the 10th. Idiot."
"I know... he never strikes out."
"Cubs win 6-3. I'm gonna take a handful of these blue and yellow pills and go to bed."

HAHAHAHAHAHA!
Well, Cubs win and the shoot was fantastic which was really good because man, I had one of those mornings from hell that included having to kill a giant roach that was in my backpack because I'd left my backpack open and on the ground in a gross part of L.A. on the shoot the day before and all my nerve endings were shot from the bad adrenaline that came from the shock of the bug JUST LOOK AT THAT THING 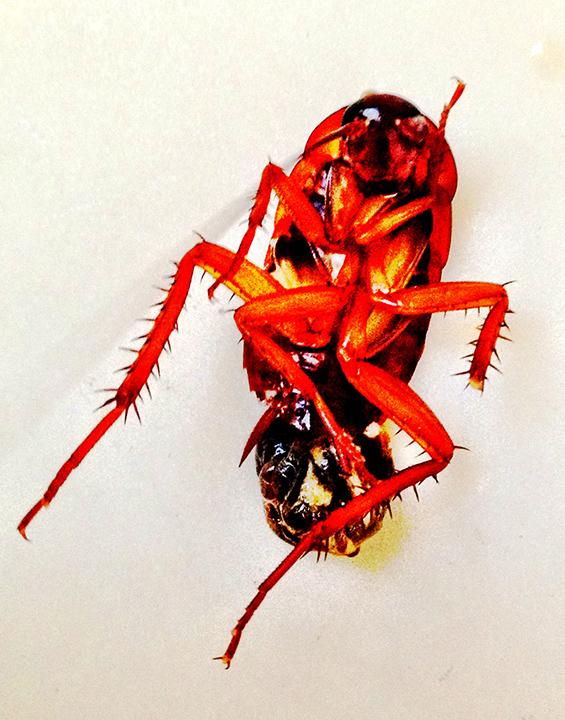 and now I'm late and I'm hauling ass and I have a bag with extra shorts in it in case it gets too hot out and I know my key card is in the pocket of the shorts so I don't reach into the bag to get out the shorts to put the keycard in my pocket and I run out of the room and realize I forgot the bag with the shorts so I turn around and I'M A TOTAL IDIOT because now I'm locked out so I go to the front desk to get another keycard right in front of the people who are waiting for me because I'm late and I have to sheepishly wave at them while they give me dirty looks, run back up to the room and grab the bag with the shorts so now I'm carrying my backpack and bag with shorts and I need the wirey plug-in thing for my iPhone which only has 8% power because I need the map on the phone for directions to the location so by the time I get out to the car I've also pulled the wirey plug-in thing out and now have to pull out my wallet to tip the car guy who has politely opened the trunk which is where I put my backpack and bag with shorts and then slam the trunk on the wirey plug-in thing and while it's not cut in half it doesn't work when I plug it in but with the printed out map we find the exit and I was supposed to turn left at the top of this hill but missed it and was forced to go back on the highway and find the next exit to turn around and go back.
It was a nightmare.

Anyway, it's another day and we're back to my favorite rivalry in all of sports, the Cubs vs the Cardinals.
Go Cubs. 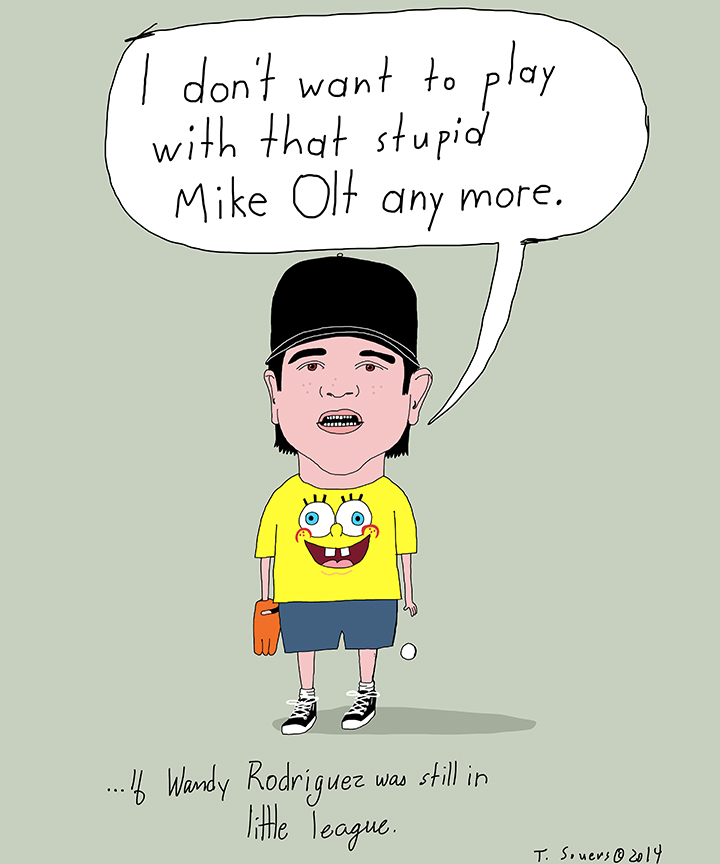 Well it seems as if Wandy Rodriguez kinda lost the spell he had over our favorite team.
And Mike Olt has hit one out against him in both Cub/Pirate games so far this season.
Olt's like that new kid who moved to town.
The one who you look at across the field and go, "Uh, you think he's any good?"
Anyway...Nice!
No time for alot of talking today, but COME ON CUBS - YOU CAN TAKE A SERIES AGAINST A REALLY GOOD PIRATE TEAM TODAY!