What will the Cubs starting lineup be on Opening Day?

Well, here we go.
2014.
In Pittsburgh again, but it'll be sunny and almost 60.
Lefty Francisco Liriano on the mound for them, so the only thing I know for sure about the Cubs' lineup is...probably Nate Schierholtz won't start in right.
But it's going to be so nice having life get back to normal, when pretty much every day I can count on Pat Hughes' voice and the pity of people who aren't really baseball fans.
Go step in a freshly thawed Lincoln Park dog turd, you people.
Sure, the Cubs ain't gonna win it all this year, but this  year is about a billion times better than last year, and next year promises to do the same thing, exponentially.
And it's a shame when, on Opening Day, "hope" is defined as "managed expectations".
But hell man the managed expectations this year include Mike Olt hitting his first Big League homer.
That won't just be one Olt homer - in the Grand Scheme of The Future Of The Cubs, that's Neil Armstrong taking a walk on the moon.
Take a moment to enjoy Jeff Samardzija and his potential for honest to god greatness.
Maybe Anthony Rizzo hits homers.
Or maybe it's doubles - I don't really care as long as he hits.
Hopefully with someone like Castro on base.

And I haven't mentioned him I don't think even once, but I'm looking forward to the new bus driver, Rick Renteria.
I could not believe that the Cubs sucking and Castro and Rizzo not "moving forward" was all because of the manager, but maybe Renteria will be different.
He sure seems to be.
Anyway, go find a hot dog, a cold one and a tv around noon today.
It's baseball season, man.

Last thing, I got a really nice shout out from a Pittsburgh blogger, RUMBUNTER.
So if you get a chance, check their blog out today.
That is one awesome name, isn't it?

Edit:
Here's the lineup for real: 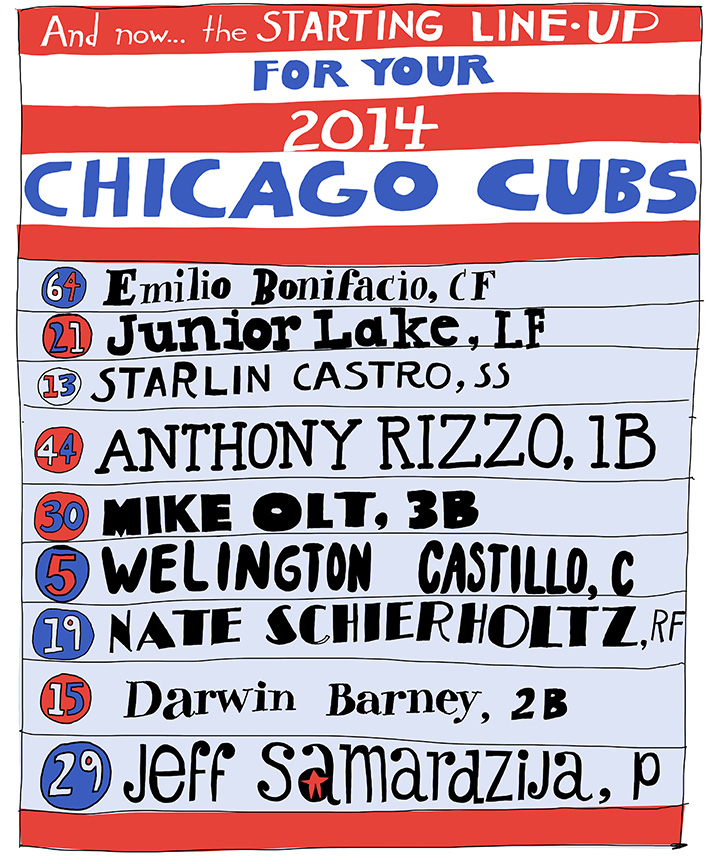 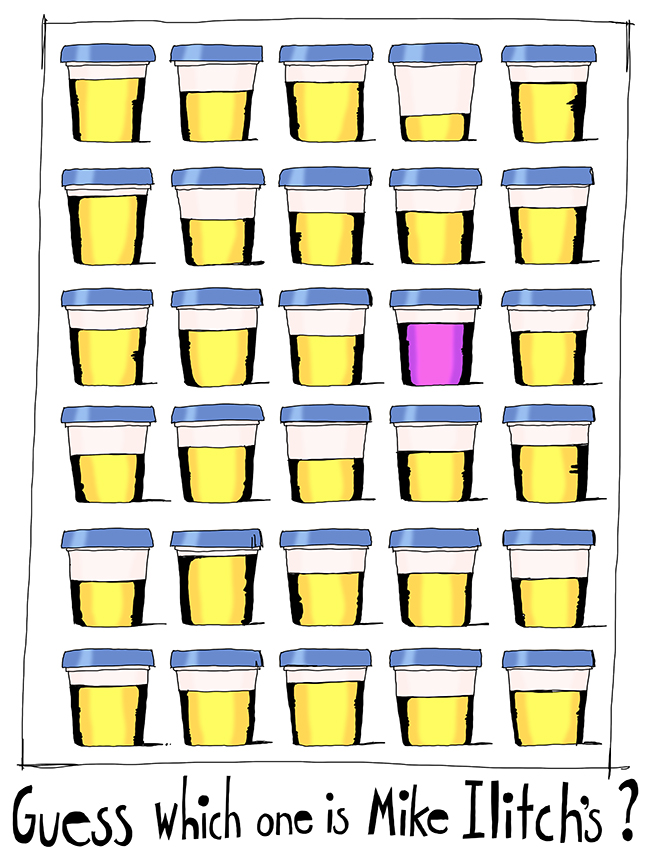 Man.
That's alot of cash, Mr. Ilitch.
Cannot argue with the talent displayed by Miguel Cabrera over the course of his career, but...
Chicago's kinda close to Detroit.
Did you not see the pain that Alfonso Soriano's contract inflicted upon us Cub Fans?
I mean, we were all kind of polite about it at the end because Alfonso actually learned to catch a fly ball, but I am telling you there is nothing worse than a guy past his prime eating up the main portion of the team salary.
The Cubs will still pay $13 Million dollars to the Yankees in 2014, and they did that just to get him out of town where his presence only reminded everyone how awful the situation was.
And the Soriano contract is/was...nothing compared to Cabrera's contract.
$292 Mil over the next 10 years, and if it's all evened out that's about $31 Million Dollars the Tigers will be paying him when he's 40.

The other wild news yesterday was that baseball is getting tougher with cheaters.
They'll be testing more often and using more sophisticated techniques (Carbon Isotope Ratio Mass Spectrometry, anyone?), and now the penalties start at 80 games for a first offense, 162 games (plus any post season games) and that year's salary for the second, and you're gone with the third.

Now, I'm not saying Mike Ilitch is taking any kind of performance enhancing drug.
But maybe something else...

Here's a weird Mass Spectrometry video.
No idea what that means but I'm the art guy.

And now, on to happier things... The Chicago Cubs will open their season against the Pittsburgh Pirates in Pittsburgh at 12:05 Central on Monday, and I can see Monday from here.
Go Cubs!

Can the Cubs please just pencil Mike Olt in already? 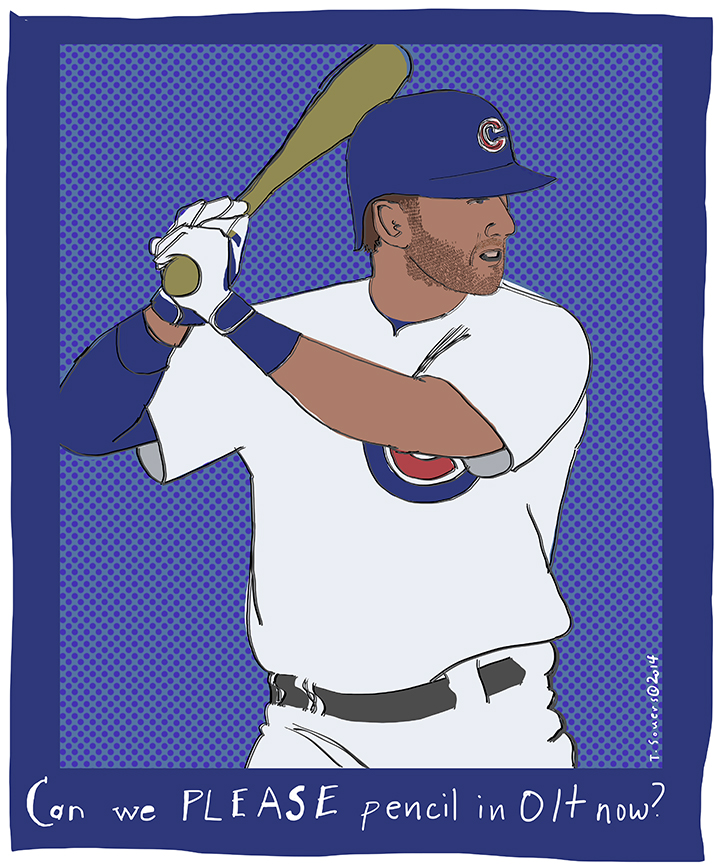 Can we pencil in Mike Olt at 3rd?
I'm pretty sure we can.
Donnie Murphy has been claimed off the waiver wires and is now a ranger.
On Cubs.com, they only talk about Mike Olt vs Luis Valbuena at third as sort of the battle, but it's more complex that.
Valbuena could move to second and add a bit more pop to the lineup, and if you count out any trade scenarious, Darwin Barney's suddenly a nice bench guy.
Who's gonna play where, yada yada...

What Mike Olt feels like to me is the first actual proof that the Theo Epstien Plan is coming to life on the actual baseball diamond we'll all be watching.
Sure some stuff has happened, but Castro was basically already here, Rizzo came with the new management, Junior Lake - I'm not sure what he is yet...
But putting Mike Olt at third could mean alotta stuff for the Plan.
If he sticks and is awesome, then perhaps Kris Bryant moves to the outfield.
Then the mind boggles with possibility of greatness.
This is in no batting order, but Byrant, Almora, Soler, Olt, Baez, Castro, Rizzo, Castillo...timewise, that's not that far off.
Maybe a new commish suddenly says the NL will adopt the DH.
Add Vogelbach.
I don't know what's really going on in Theo's mind, maybe there are big trades coming up.
If you're a god-like pitcher, would you not want to come be god-like in Chicago when they're making The Big Run?
Anyway, this is all so freaking exciting my eyes roll back in my head, I make baby noises and I might easily walk in front of a bus, so I gotta stop now.
But the last thing about Olt.
How much more exciting will summer be with just that one guy coming up?
What might happen to the pitches Rizzo sees if pitcher's gotta worry about Olt?
I mean, it's just one man but the enetertainment scale for this summer could go from a 64 to an 88.
Pencil him in Renteria.
Right now. 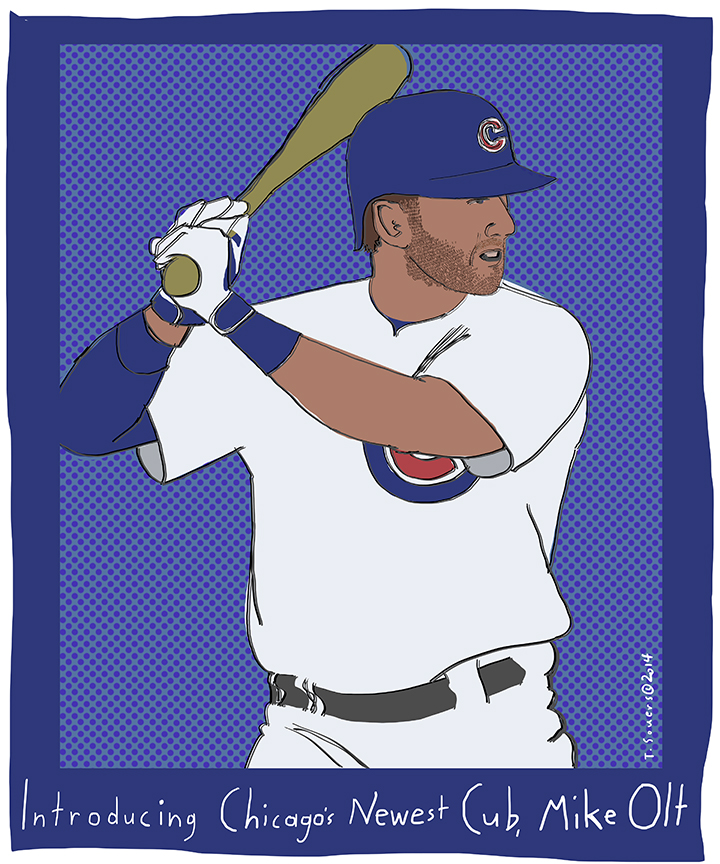 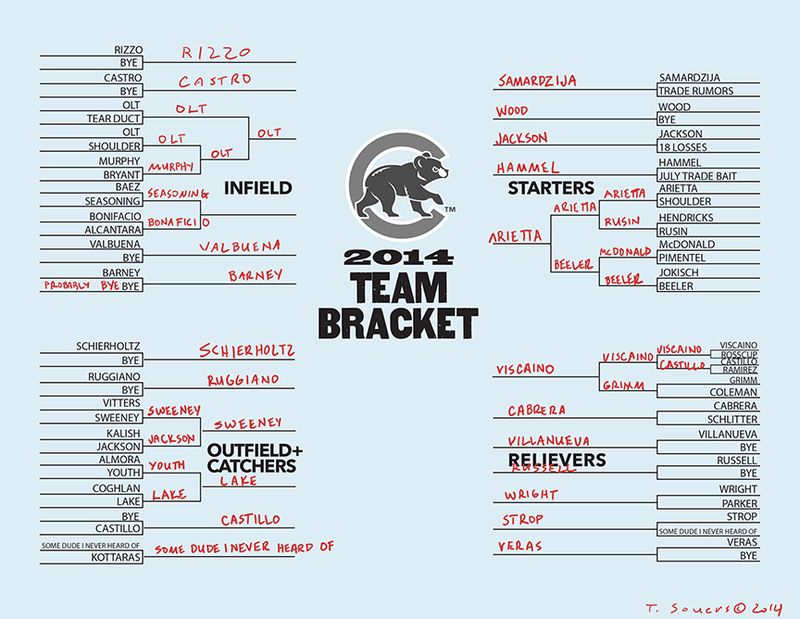 I heard BMO Harris was giving out a free checking account to anyone with a perfect Cubs Bracket this year, so I filled one out.
The annual March Madness Trip to the Terrific Twenty Five Man!
So far I got all the Olt matchups right.
He beat Tear Duct, then Shoulder, now he just has to get over himself.
But you can also see I screwed up pitching from the start.
My cinderella was Viscaino, but he went out early and Arietta lost to Shoulder in the first round.
Pretty much ruined everything.
And this morning, it looks like Kottaras is gonna lose to Some Dude I Never Heard Of.
Probably because Some Dude is a lefty.
But Almora lost to Youth and Baez to Seasoning, which I guess we all expected.
Anyway, don't you love March Madness?
There's still a buncha guys gonna get moved til they finally get down to the Terrific Twenty Five.
And I didn't win a free checking account.
Whatever.
Go Cubs.

PS: I did this quickly as just a goofy idea, so please don't mistake this for anything factual at all. BMO Harris isn't doing anything like I said because I made it up. And I just counted and it looks like I only have 24 final slots anyway. Plus I forgot to fill one in. But maybe next year we try to do an actual "bracket" before st even starts and I offer a painting to whoever is closest. Somebody remind me in about 10 months, please.

The Lucky Arizona Fan who got all 3 Junior Lake home run balls. (gif)

Well, that was one fun game to watch.
Junior Lake with 3 homers, Luis Valbuena with 2 (he's now got 6 total this spring, leads the club), and Mike Olt bashed one too.
And...these balls were smACKED into the desert, too - lots of air with no humidity.
Seriously, a coyote is probably playing with one right now.
Cubs 10, A's 6.
Lots going on with the sending guys down stuff.
Javier Baez was sent down, and Olt didn't help himself with a couple errors today so we'll see about that - they were the first balls he fielded all year at 3rd too. Pretty bummed about that.
And then, will Carlos Villanueva be a starter or in the pen.
Tuesday's night game vs San Diego will have C.J. Edwards making his first Cactus League start.
Must watch!
Gotta Run Go Cubs! 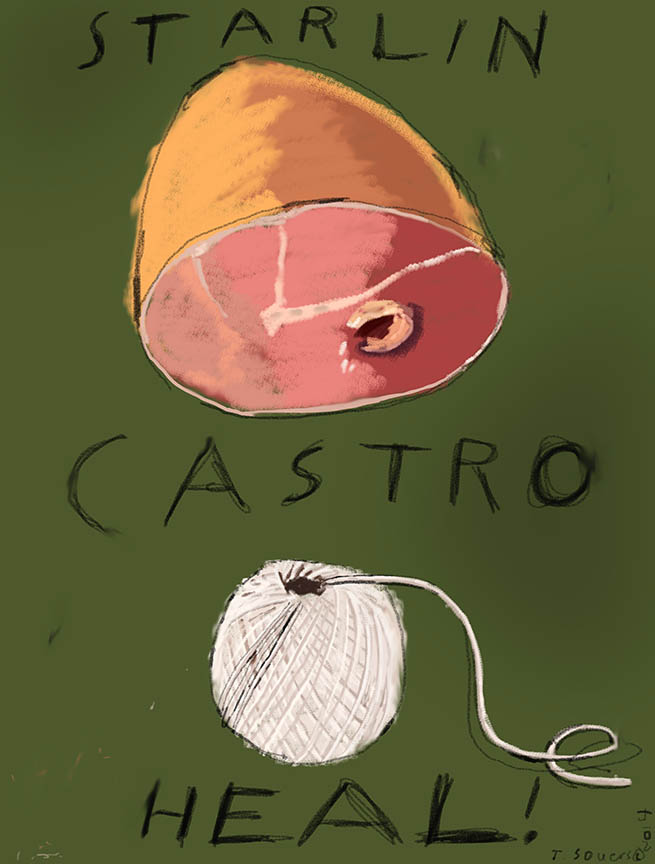 I hate hamstring injuries.
Remember when Starlin Castro first hurt his this spring?
It was a little attempted steal and called a "mild" hamstring strain.
He was expected to return to action "by the end of the week".
That was almost 3 weeks ago now.
So, you know, a little worse than they thought and I understand the language - you don't want to spread panic in the paper, right?
But there seems to be all this pressure that he be in the starting lineup on opening day, and it shouldn't be there.
If Theo and Jed don't want to start any service clocks early (like Baez), then don't.
Surely between Valbuena and Barney and Murphy and Bonaficio and hopefully Olt, they can field an infield.
Castro's (probably) close enough to not go on the dl, he can sit on the bench or maybe pinch hit for a game or two.
All I'm saying is that March 31st is going to be day one of perhaps Castro's most important season, and it's in Pittsburgh where I'm pretty sure it'll to be closer to winter than summer as far as temperatures go.
Hamstrings don't like the cold.
So just be sure that Castro is 100%.
Don't start him if he's not ready because everybody's gonna be staring, filled with huge expectations.

Spent 10 hours on the highway to Dayton and back yesterday picking up my Spring Breaking son.
One semi went off into farmland and maybe 8 people pulled over for speeding, but otherwise it was in the mid 60s and the country looks like it's about sprout some green.
Gorgeous.

And, you know, little more than a week until real, honest to god baseball.
Can't wait.