Think about the guy who has to photoshop baseball hats every time a trade is made. 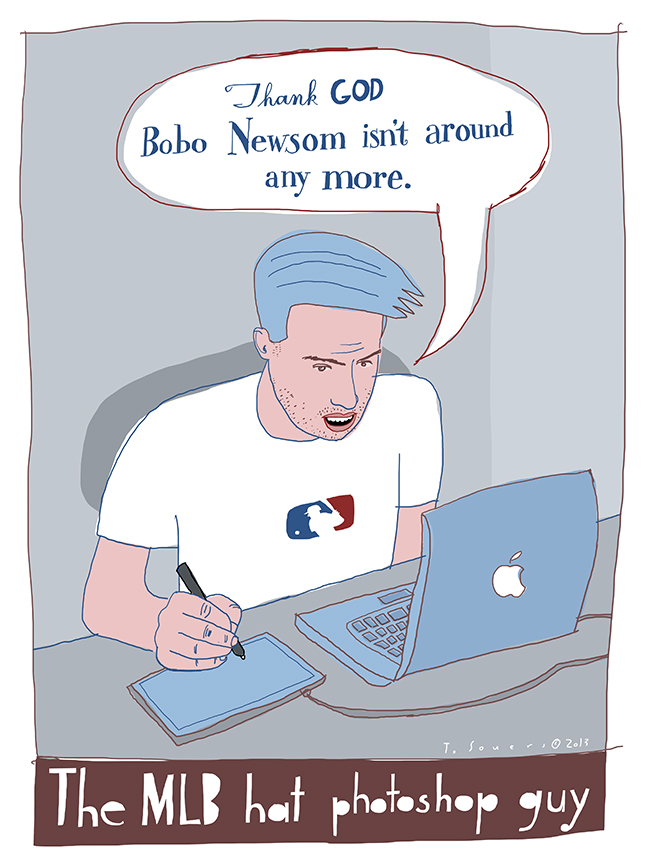 I went to Cubs.com just to see what the depth chart looks like.
Maybe there would be new pics in there.
Sure enough, there's Justin Ruggiano in center field complete with his new Cubs hat!

So I googled imaged him (you can look at this same page here).
See the official MLB portrait-looking photo of him with the white background?
He's wearing a Miami Marlins hat.
But if you click on it, it magically changes into a Cubs hat!
That's the miracle of photoshop.
And I bet there's an underpaid 2 years out of college design major kid working for MLB who's got to change every one of those hats every time a trade is made.
This last month had to be the busiest of the year.
I googled this: "what baseball player has been traded the most?"
(I thought it might be Kenny Lofton.)
But the answer is this guy Bobo Newsom.
Pitcher played for the Brooklyn Robins, Cubs, Browns, Senators, Red Sox, Tigers, Philladelphia Athletics, Brooklyn Dodgers, Yanks, and Giants.
Lots of them on more than one occasion.
He was traded 16 (sixteen!) times.
Wow.
Anyway, if Bud Light was still doing their "Real Men of Genius" radio campaign, they could do one for our guy in the illustration:
Today we salute you, Mr. Major League Baseball dot com hat photoshopper guy.
You had the honor of switching hats for Robinson Cano
The excitement of retouching Jacoby Ellsbury's new lid
The talent to make Raul Ibanez an Angel
And while it may be a pain in the ass to bother with making Jonathan Sanchez a Cub,
You'll do it anyway because you're the Tweaker of Tops, the Fidrych of Photoshop, and...
because your boss told you to do it by May.

How about this easier (less expensive) solution: When a guy signs his first professional contract, he has to sit for a half-hour photo session and get his picture snapped with each of the 30 MLB team hats?

Nah...now that I think about it, they'd still need the Photoshop dude to add in the longer hair, beards, mustaches and tattoos that show up later in the guys career!

Imagine trying to keep up with the evolution of someone like Brian Wilson?!!!

I figure they probably are developing an app for hat switching.
That way, the only thing that has to happen is each guy gets his photo shot at the same angle.
Now beards probably take a little more time...