The Bears Word of the Day: "Destiny". 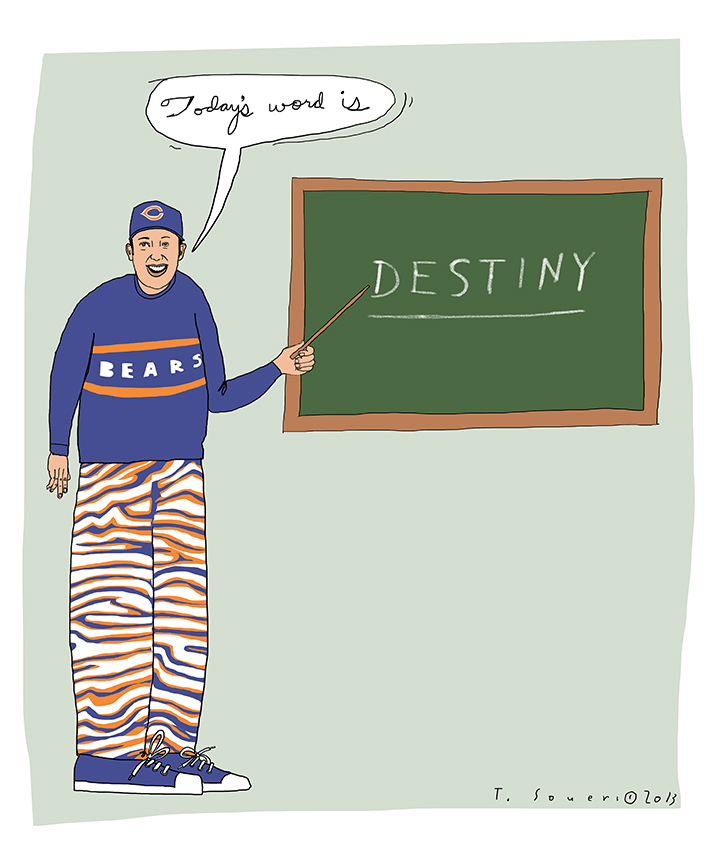 Well well, Detroit Lions.
Thank you so much for this fleeting moment of joy.
You blew your lead by letting a field goal kicker beat you all by himself as the Baltimore Ravens beat you Lions 18-16.

And now the Lions and the Chicago Bears get to trade this sentence: "We control our own destiny."

Destiny.
It has mystery, that word.
And romance.
There should be dragons and swords and maidens involved.
Or maybe tommy guns and money.
Or maybe this: for my bachelor party 21 years ago, a bunch of my buddies took me to Sun Devil Stadium in Tempe where the Arizona Cardinals lost a pre-season game.
Then they carted me to a club called the Bourbon Street Circus, where a young woman wearing only a thong was doing a dance in front of me that made me so nervous I tried to change the subject and said, "So ahhh...what's your name anyway?"
She looked deep into my eyes and said, "Desssstiny."

To which I replied, "Wow."
Then, I guess it was kind of impolite of me but I just could not stop laughing.

Anyway, no matter what anybody says, no one is ever in "control" of destiny.
My hope is that the Bears and Packers win this next weekend, so that they're both atop the NFC North.
And all week long leading up to December 29th we can all say it was destiny - DESTINY - that the Bears and Packers would again be playing a game with such importance at the end of the season.
Because that's the way it should be.
Or I should say, that's the way it should be destined to be.
If I could go back in time to my bachelor party, instead of laughing I wish I would have said, "Tell me, Destiny, what's going to happen to the Bears at the end of the 2013 football season?"

I agree..."controlling destiny" is a bit of an oxymoron. And as for Desssstiny, I don't think anyone controlled her either!

Sorry beleaguered Michigan, but I was rooting against you this week.

As for the Lions, all I can say is that any team that employs Jim Schwartz AND Ndamukong Suh (and has such maniacal fans) deserves to get knocked out of first place by some skinny guy who can kick a football 61 yds. through and over the goalposts with 6 inches to spare. I swear the collective groan was at least 110 decibels. Music to a Bears fan's ears!

Moving on to college basketball, speaking of maniacal fans, what's with the University of Michigan yellow-shirted student body jumping up and down in unison like some cross between a Riverdance flashmob and a Zulu wedding ceremony? I'm surprised the stadium didn't collapse! Oh well, #1 Arizona beat them and stilled the human jumping beans!

And so, with the Ravens win over Detroit and UA's win over UM my anti-Michigan week is complete!

And, I'm no Ravens fan, but that was very nice.
Did you notice the Raven DBs?
It was crazy.
They would run towards the ballcarrier, they would make contact with their facemask in the ballcarrier's chest area causing a loud collision, and THEN... at the same time would wrap their arms around the ballcarrier until he fell down.
I saw this happen on numerous occasions, Bud.
I wonder what you call that.

Q-1. Yes, UA is #1 right now at 10-0. But they started 13-0 last year. There's this little second half hurdle that college basketball teams have to deal with called the conference schedule. You know, when you play REAL teams who might actually beat you?

But I give credit to UA coach Sean Miller. He's already played the likes of Duke and Michigan. I might actually get to see a hometown national championship!

Q-2. That defensive maneuver you described is rumored to be a "tackle". I can't be sure though, because as a Bears fan I don't get to see it much.

Maybe I'll go to a Pee-Wee league game. I hear they teach the maneuver there!

Wow, that's kind of amazing with the 10-0 Wildcats!
I'll have to pay attention.
And thanks for giving me that word, "tackle".
Hmmm.
I do remember hearing that one time.