« Think about the guy who has to photoshop baseball hats every time a trade is made. | Main | Hottest Holiday Gift for Cub Fans: Chia Wrigley! (watch it grow) »

I wonder what Lance Briggs' doctor note looks like? 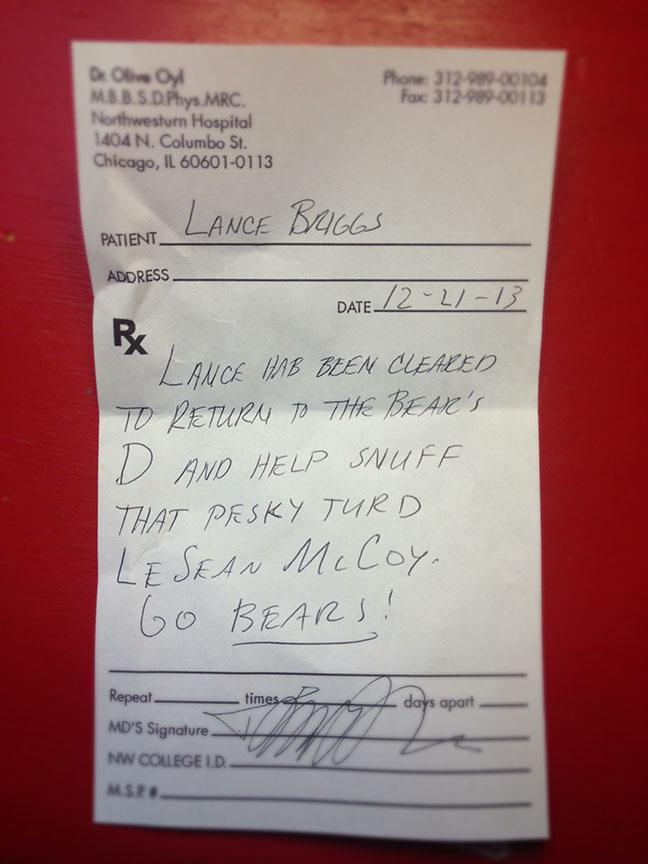 Maybe it looks something like that, right?
I'm not looking it up here, but if you recall I had shoulder surgery and the doc turned out to be the Bears' doc.
Bears' doc has a lobby full of Bears photos (of course featuring the doc working emergency stuff on the filed/sidelines).
So surely whoever is working on Lance Briggs is a Bears fan.
Maybe the note doesn't specifically say, "...cleared to help snuff that pesky turd LeSean McCoy."
Maybe it actually says, "...cleared to help snuff that shifty douche bag LeSean McCoy."
Or, "...I HATE THE PACKERS FIRST but the Eagles aren't far behind."
But I bet it ends with "GO BEARS!"

Anyway, this news couldn't come at a better time.
I hope he gets in at least a couple plays/series against the Eagles, and then by next week he's all good to go at the same time Aaron Rodgers is.

Here are the different scenarios that can play out today courtesy of the Sun Times and Mark Potash:

◆ If the Detroit Lions lose to the New York Giants at Ford Field and the Packers beat the Pittsburgh Steelers at Lambeau Field, the Bears-Eagles game will have no impact on the NFC North race. The Bears-Packers game will decide the division winner.

◆ If the Lions lose and the Packers lose, the Bears can clinch the North with a victory over the Eagles, and next week’s game against the Packers will be meaningless.

◆ If the Lions, Packers and Bears win, the Bears still have to beat the Packers to win the division.

◆ If the Lions win and the Bears lose, the Bears can only win the division by beating the Packers next week while the Lions lose to the Minnesota Vikings.

No matter what, it's the start of the Holiday Season and the Bears are on tonight.
It's just the greatest thing.

I was reading over at The Cub Reporter, and in the comments was directed to a really cool little story that just helps us with our understanding of the Epstein Brain.
It's about Justin Ruggiano, who I'd never thought twice about before.
Read this from ESPN.