« The Bears Word of the Day: "Destiny". | Main | Think about the guy who has to photoshop baseball hats every time a trade is made. » 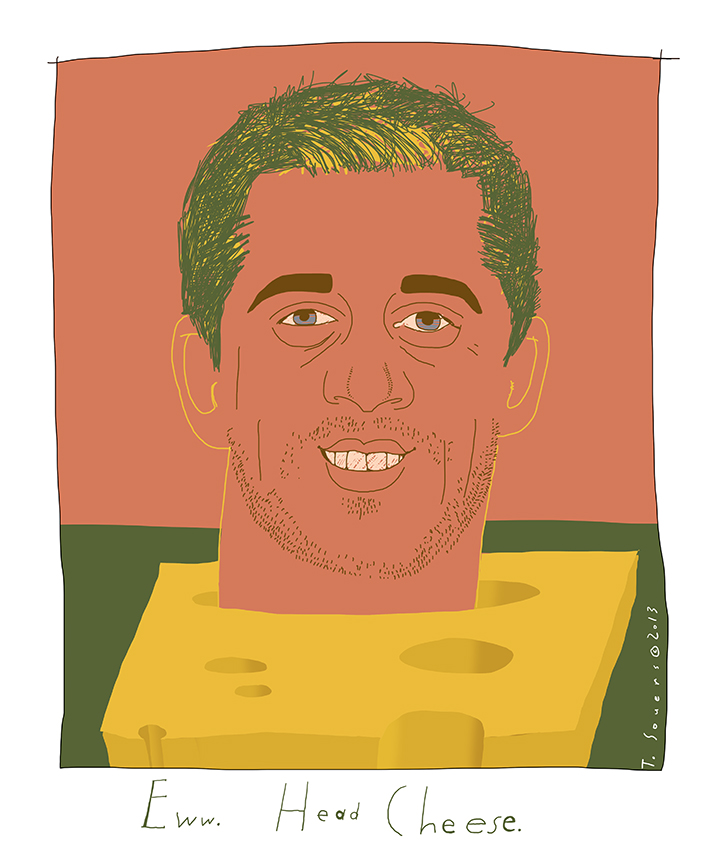 Have you ever had head cheese?
I can eat anything.
I've eaten sheep brains and the balls of bulls and even pizza with pineapple on it, but the one time I tried head cheese?
Sometimes, when we do something bad to our bodies, our brain may not even know it.
But the body does, and it wants to make the bad thing go away.
Luckily I merely spit it out and didn't actually hurl at the table, but once my brain realized what had happened it said to my body, "Don't worry man, that'll NEVER happen again."

So I kind of played my hand yesterday and let you all know that in my little perfect world, this regular football season would end with the Green Bay Packers coming to Chicago to play the Bears in a game that would decide who the NFC North champion would be.
It's destiny, yada yada.
And if it happens, my other hope would be that both teams have their A guys playing.
I would want Aaron Rodgers in there.
I don't want to hear any whiny Packer fan later on saying, "Well you only won 'cause Rodgers was hurt and didn't play."
I WANT THE BEARS TO BEAT THE PACKERS WITH THAT GUY STARTING.
And if THAT can happen... well, I'll be satisfied for the year.

Today, Aaron Rodgers is going to practice, you can read about it on NFL.com.
So as sick as this sounds, I hope you get better, Aaron.
Because you're the Head Cheese.

The Lions came through with their choke as we knew they would.

All that is needed now is for the Packers to beat the Steelers. If Detroit somehow manages to lose to the Giants, then I'm rooting for the Eagles Sunday night (on general principles). Otherwise, I'll be rooting for the Bears.

I do not consider the Packers beating the Steelers as a given, but it is in Green Bay...

"Head cheese is not a cheese but a terrine or meat jelly made with flesh from the head of a calf or pig, and often set in aspic."

You have to wonder about the first person to conjure up head cheese. Who says "Hey, if you're gonna throw away that pig's head, can I have it so I can make some meat jelly out of it?"

The only thing more disgusting than eating head cheese would be to have to listen to Milton Bradley's opinions for a year.

(Oh wait...we already did that)

There's a crazy bunch of scenarios involving these teams and Dallas and whether or not the games really mean anything this week.
I don't really care about how that all shakes out, I just want the Bears/Packers game to mean something and we're all going gaga all week leading up to it.

I read that page too, Bud.
There's more gelatin in the skull?
So it makes that jelly?
The whole thing is so disgusting no wonder they called it "head cheese" rather than "head meat".