Bears vs Lions. A HUGE opportunity for Chicago. (gif)

You've been thinking about this all week.
What if the Bears can beat the Lions and the Packers lose to the Eagles?
I think any dang thing can happen in that Packers game.
But the Bears, they ought to be a bit more motivated this weekend.
A home game, revenge for the last loss, Cutler out to prove he's healthy... it's just a huge opportunity for the Bears.
Because, and I'm certain you've done this math too, it could go from 3 teams tied at 5-3 to one team (that would be the Bears) at 6-3, and the other two at 5-4.

Giant day for the Bears.
As for me, well that's in the cartoon.
(of course that's a joke - nobody has the rights to the remote on NFL Sunday but me)

Yay.
The Cubs hired a new manager, ex Padre bench coach Rick Renteria.
It's not all baseball celebrity-atory like Joe Girardi would have been, but it is fantastic they got a guy who's supposed to be a good teacher and speaks the language of some of the Cubs most promising players.
Plus he kinda looks like Earl Weaver with that older guy white hair thing going on - looks like a baseball man.
I'm also glad they hired him just because it was taking forever.

So lets see if Starlin Castro can get back on track.
Remember at the beginning?
All that promise that sort of just flattened out last year.
I can't believe that was all Dale Sveum's fault, but that doesn't matter now - there's a new guy and I'm dying to hear what Theo Epstein has to say about him at the press conference even though Renteria won't be there due to some hip thing that won't allow him to travel.
Maybe somebody with an i-Phone will video him putting on the Cubs jersey.

Lastly, it's just an eye-poppingly gorgeous fall day in Chicago. 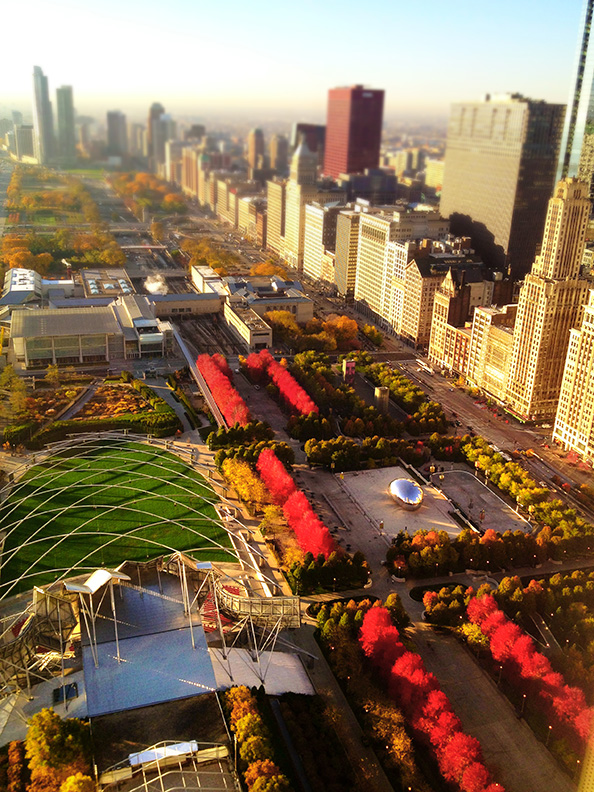 And now... back to your regularly scheduled wait for the World Series...

How impossibly amazing was that?
The Bears beat the Packers in Green Bay with a back up qb.
One of the most satisfying things was, and honestly I won't be happy if Aaron Rodgers is really hurt hurt, but... you know how in magazines like People and Us they have those articles about movie stars, but they show them doing regular-people stuff?
Just like us?
Like there's Donald Trump shopping at Walmart - that kind of thing?
Well, it turns out that the Green Bay Packers actually screw up too.
And don't have fabulous backups for every position.
Just like us.
The guy, in fact the ONLY guy the Packers have for a backup QB is Seneca Wallace.
Remember Caleb Haney?
That's what I mean - just like us.
HAHAHAHAHAHAHAHA!!!

So anyway, totally unexpected, I won a bet for a million dollars (okay that was a joke but still, Big Swede, YOU OWE ME SOMETHING!), and I'm in a shockingly fabulous mood considering what I thought my mood would be today.
I'm ashamed at my post from yesterday and GOOD GOD! one little victory over the Packers can change your outlook on everything.
Marc Trestman really IS a genius, and Josh McCown - I was telling somebody this after the game...if I'm sitting in Jake's Pub 10 years from now and McCown walked in?
Totally buy the guy a beer.
This one goes in the memory book for it's awesome unexpectedness.
How about that O-Line?
I LOVE THOSE GUYS!
Okay I'm a babbling idiot, but that's okay on a day like today.

I just read it's a collarbone for Rodgers and that's gonna hurt.
They say 3 weeks so... it would be awfully nice if both teams healed up for the Holidays.
(I'm being SO nice it's making me sick, but I'm just in that kind of mood)

Anyway, there are now 3 teams tied with 5-3 records in the North, and the other one comes to Soldier next week.

Are the Bears going to become the Professors of the Midway? (gif)

You have undoubtedly noticed the switcheroo in our favorite football team, the Chicago Bears.
They might be black and blue, but they're no longer the Monsters of the Midway.
Sure, there are injuries galore and that can't be discounted.
But this year, even if they were at full strength, that "monster" thing is long gone.

Not saying that's all bad - we've all wished for a better Bear offense for um, forever.
And to be clear, I do not miss Lovie.
But it's so freaking weird watching them this year with the offense taking over the dominant role that the defense used to have.

It used to be kinda like the defense was the Rolling Stones, and the offense was ohhhhhhh... say.. Eddie Money.
But now it's the other way around.
And what it means tonight is Eddie Money has to try and stop Aaron Rodgers, only with all the injuries Eddie is Broke.
While on the offense, poor Mick fell off the stage.

In the meantime, I'm not sure what to yell at the television.

What to do while waiting for the Cubs to get to the World Series: have a Lagunitas Little Sumpin'. 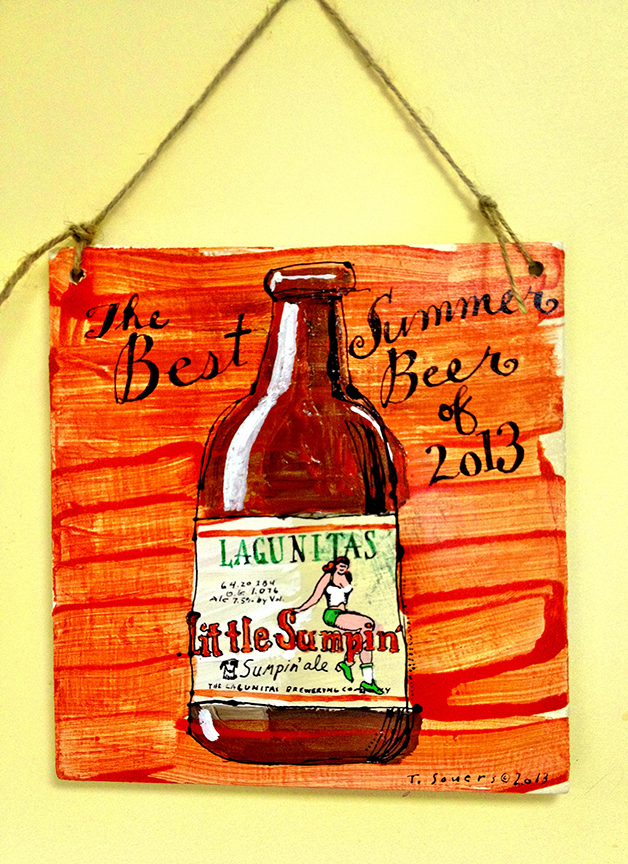 It's apparently still going to be awhile.
The Cubs going to the World Series, I mean.
So while you're waiting, why not have a frosty cold one?
Like a Lagunitas Little Sumpin' Sumpin' Ale?
Early this summer I was on production, staying in Santa Monica in a hotel where there's a little menu of stuff in the fridge.
Like 7 bucks for the opportunity to have an Amstel in my hotel room.
Nah.
So I walked over to Main St. and about a block down from Pico is a really seedy liquor store.
But respectable looking locals walked in so I did too, and they had a fab selection of crafty beers.
I'd never seen this one and it had a really cool label and it was called "Little Sumpin", so...sure.
If you go to the website, you see it's a "pale wheat ale that is great for IPA and wheat beer fans".
I'd just call it great, and the "wheat" part is way in the background.
Of all the new beers I tried this past summer, this was my favorite find.
Potent but not crazily so, and as it says on the bottle, "Life is uncertain. Don't sip."
Nice.
And before you know it, we'll be watching the Cubs dance around Wrigley Field in a late October...

Way back in ad time, there used to be this super simple Bud commercial where a construction guy comes home from work.
There used to be a million spots like that - I think "guys coming home from work want beer" was beer's basic strategy.
Anyway, he's in the shower, his wife comes in and hands him a beer through the shower curtain.
Cut to tight shot of guy's face - big smile.
How cool is that?
Probably a "This Buds For You" spot.
For some reason, I remembered it earlier this summer.
I tell my wife about it and then I go, "So...I'm gonna go get in the shower. Bring me a beer when I'm in there?"
She goes, "What am I? The beer vendor?"

I was reminded that stuff you see in commercials isn't necessarily based on reality.

Painting is acrylics and ink on a chunk of plywood.

You can't really tell exactly what date the Baseball New Years Eve will be.
It's always the night that some team wins the World Series, so it's definitely late October but that's all you know.
On Wednesday, the Boston Red Sox won and the Baseball New Year celebration began immediately.
(There was even a giant ball drop this year, but it happened in game one, between Cardinal pitcher Adam Wainwright and Yadier Molina.)
Thursday was Baseball New Year's Day.
Probably there was some college ball on, but I had to work.
Today however, the celebrating is done unless you're a Red Sox fan - those guys can celebrate for a whole year.
But you know what?
I'm not a Boston fan, and neither are you.
Here's all I have to say about the 2013 World Series.
I looked at the Cardinals with all that talent and thought... well being Cub Fans of course we're all wondering about managers, right?
I looked at the Cardinals and I thought good GOD, the mailman could manage that team.
Imagine being Dale Sveum.
Mike Matheney is announced as manager of the Cardinals on November 14, 2011.
3 days later, Sveum is named the manager of the Cubs.
2 years later, Svuem is fired and Matheney's in the World freaking Series.
Sounds like a 2 year Cubby Occurance and while there's nothing fair about them, that's just life.
I figure that on this fine Friday morning, somewhere in Boston Theo Epstein is having breakfast with Sox bench coach Torey Lovullo.
And a manager should be named soon, because... well do you think guys are going to stand for the grilling that the last group of managerial candidates went through?
Feels like posturing or something.
Ah well whatever.

Here's what I'm thinking tho - no matter who that guy turns out to be, overall our fav team is on the upswing.
We're all starting to become familiar with names that aren't on the roster yet - Kris Bryant, Jorge Soler, Mike Olt, Javier Baez, CJ Edwards, Arismendy Alcantara, Albert Almora, Dan Vogelbach (I didn't even have to look those guys up except how to spell "Arismendy"!).
While it's improbable that any are going to be on the Big League team at next year's start, stuff might happen early to mid-season, and at least the New Cubs are coming into focus rather than just being some kind of abstract thought.