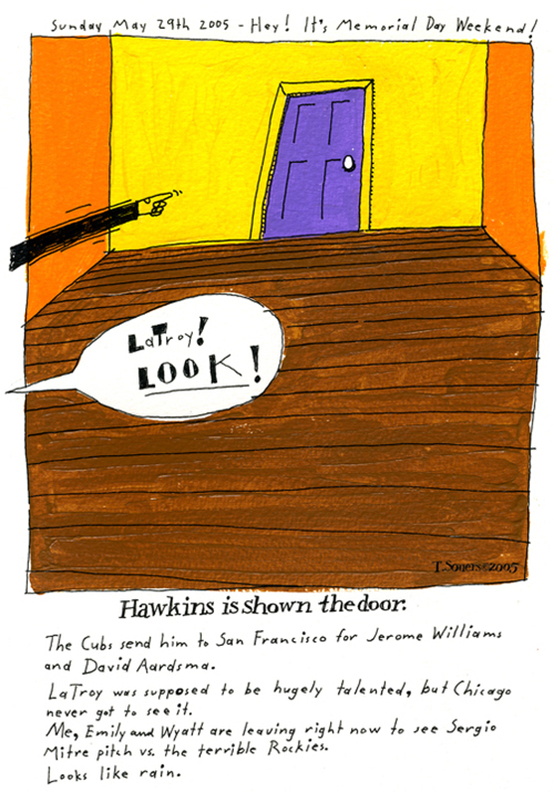 This acrylic painting was of course done in 2005, when the Cubs shipped LaTroy Hawkins off to San Fancisco for David Aardsma and Jerome Williams.
But I saw yesterday that the Rockies signed Hawkins to be their closer for next year, a one year $1.5 mil contract.
He'll be 41 in December.
So I looked at the calendar and the Cubs have a big 4 game series against the Rockies July 28-31, and then a 3-gamer in CO Aug 5-7.
Am I stretching here for something to look forward to next year?
Yeah, but so?
Hawkins has been around since 1995 and played for 10 teams if I counted right.
He's given up 724 runs (668 earned) in 1374.1 innings, and for some reason it feels like a large amount of them I watched while trying to become a fan of his.
For our favorite team he had 25 saves vs 9 blown in '04, and 4 saves vs 4 blown in '05.
And now... I take comfort in and look forward to a couple more blown next July/August.

Did you see the Hawks last night?
Man I think they gotta figure out how to get more rest for Crawford.
Go ahead and start kid Antti Raanta.
See what happens.

Lastly, I started off thinking this morning like I do every morning.
I thought: you know Tim, you're pretty smart.
I do that, really.
It's a good, positive way to start off the day.
Then, I came to work and paid $4 for a bowl of oatmeal.
STUPID STUPID STUPID!

Here's something from an old sketchbook: 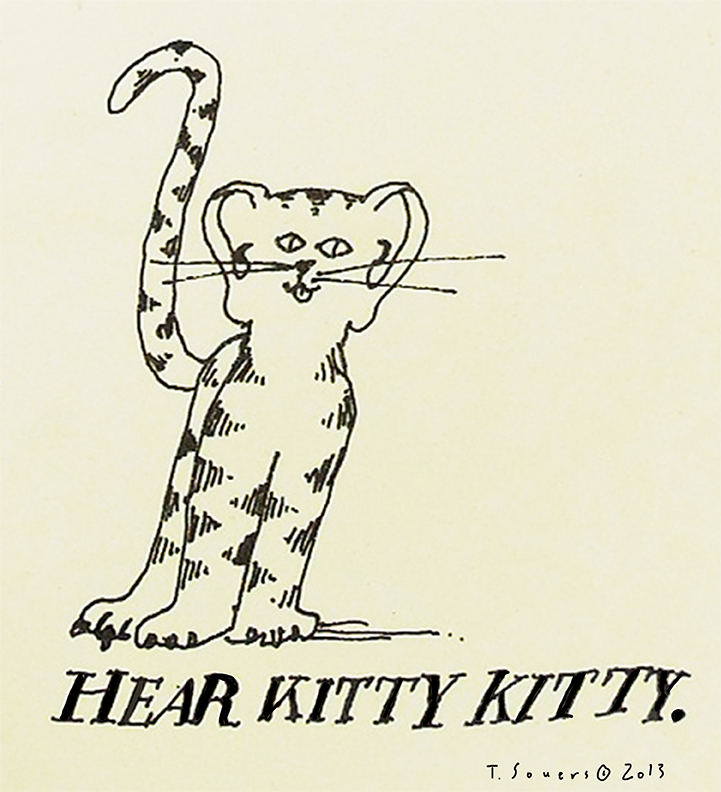 That's stupid too, but for some reason made me laugh.

Crazy NFL Sunday for the Bears/Ravens. What about some new turf at Soldier Field? 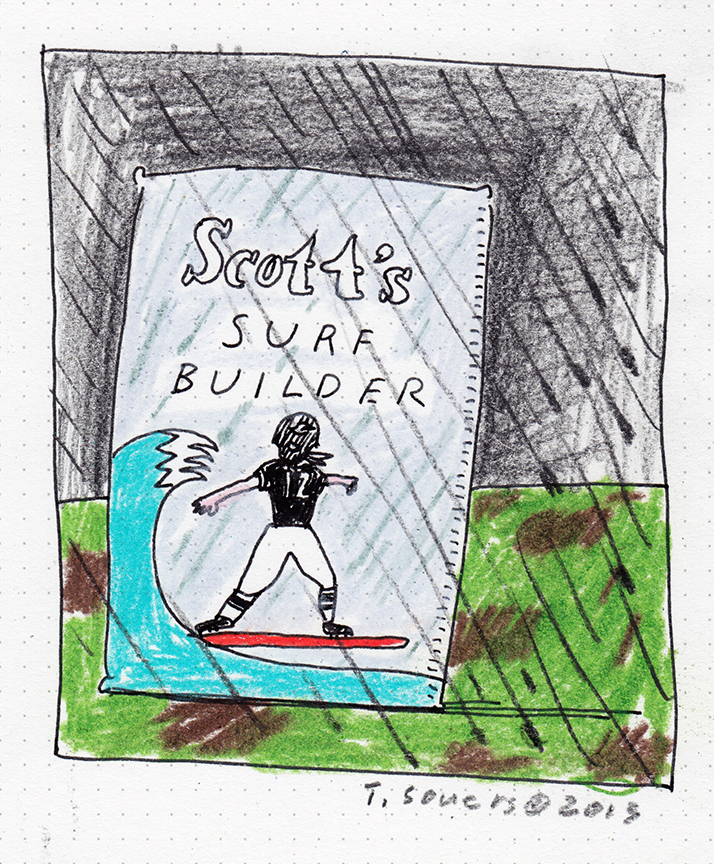 I park below the AON Center for work every day.
If you're going to a Bears game, it's the perfect place to park with the busses picking you up literally in front of the building.
This morning when I was parking for work, there was a Bears Fan just leaving.
Yesterday was one loooooong day if you actually went to Soldier.

I will continue to learn the tendencies of Marc Trestman as time goes along, but I had a heart attack at the end of regulation when he... didn't call any timeouts.
He bet all his money on the D being able to hold the Ravens to a field goal, and... well... he won.
Incredible game.
Lions lose, it's all good for Bear Fans.

But tornadoes (if I hear "tornadic activity one more time I'll go ballistic) at Thanksgiving are something I never signed up for.
It was the most surreal day ever.
I watched the weather guy just like you did, saw the first photos of incredible devastation - whole sections of towns just flattened and they're talking to some guy who is there and that biscuithead voice - whoever was asking questions to the person "on the ground" is looking at the same pictures I am and asking (my words), "You mean to tell me that houses have been destroyed?"
Not a word about injuries.
Then cut to somebody else who says (again, my words), "Well the most important thing is if you've just turned on the tv, the Bears game has been delayed so you're not missing anything..."
Huh?
Just a crazy day.

Anyway, on the field there actually was some amazing football.
When you have to play (or surf) on a field of grass that just moves under your feet and there's nothging but water and mud underneath, it's pretty awesome to have Matt Forte on your team, an actual offensive line, and a backup QB like Josh McCown.
And a kicker like Robbie Gould.

ps ps: this rainbow popped out for about 3 minutes after the first storm. 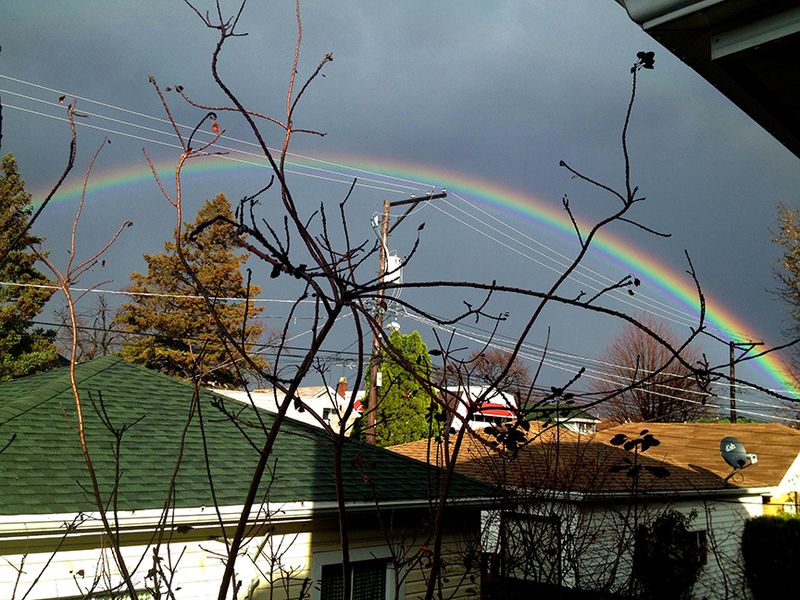 Hoyer vs. Hendry: why Cub Fans should know that there's no such thing as a quick fix. (gif)

Well, isn't THAT an oversimplification, Tim?
Maybe.
But when I read around and find comments from angry Cub Fans who wish the Cubs would change their plans and suddenly hurry the whole deal up?
This is actually a pretty good illustration of what happens.
Quick fixes don't work.
The Cubs are not only NOT trying for a quick fix, they're doing something that's probably historically never been done, which is a complete cleaning house/overhaul of a major market team in full view of it's fan base.
Can you think of one?
It's as ballsy a thing as I've ever seen in sports, and it's not even on the field.
Does it make me have a kind of split personality?
Sure.
What else would I write and draw about if not created by the whipped dog Cub Fan personality I've developed over a lifetime of losing.
It makes you sort of crazy.
But we've never seen anything like what's going on right now.
The very idea of actual Cubs making up a whole team of Cubs rather than players from every other team making up the Cubs is mind-blowing.

I'm sure the impatience will get even worse as time goes on.
But hell man, this thing is going to pay off and our time will come.
Do what you have to do to survive this period, but I hope your frustration comes on one side of your head while the other knows this is the right path, right now.
That quote from Jed Hoyer, and I hope I transcribed it exactly, is from a radio interview with David Kaplan on WGN radio.
The Jim Hendry part I cobbled together from here and here.
Jed will probably have to repeat that message about a million times again, too.

Ahh that's better - I just wanted to get that off my chest.
And of course I reserve the right to switch to the other side of my brain tomorrow and wallow insanely with more "what do do while waiting for the Cubs to win a World Series" type stuff.

Now, you wanna get happy?
Click over to Bleed Cubbie Blue and watch this 1965 Cubs vs Reds game everybody's talking about courtesy of Al Yellon.
It's in jaw droppingly gorgeous color, and loaded with the kind of Cubs History that made me what I am today.
The Cubs get no-hit, of course.

I read that Mark DeRosa retired, but took a new job as as a MLB Network analyst.
Kinda cool.
I was a huge fan, most of you who read here probably were/are too.
He gets to say this to his grandkids: "Yeah, I hit a hundred homers in the Bigs."
Super cool.
And 2008.
Yeah, a big team failure at the end of that year and still (to me at least) way more of a sucker punch ending than anything having to do with '03.
But that year DeRosa had the most at bats of his career, and his numbers were .285/.376/.481.
An .857 ops.
Not winning a batting title, but still pretty dang cool.

If you go to his stat page on ESPN, you'll see it says "Position: Second Base".
But we all remember the only positions he didn't play were basically catcher and pitcher, and I bet he coulda done a nice Doug Dascenzo impersonation if asked.
Anyway, here are some illustrations of him.

An illustration about his defensive skills. 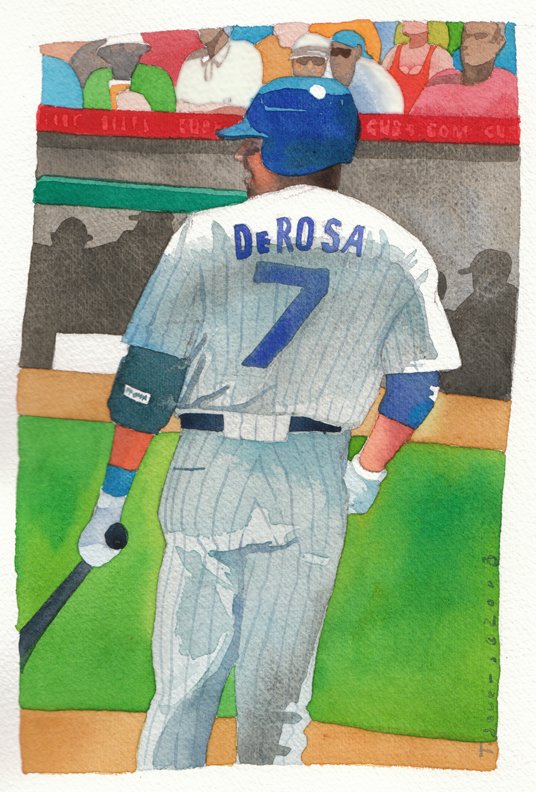 From when I was angsting about him getting traded. 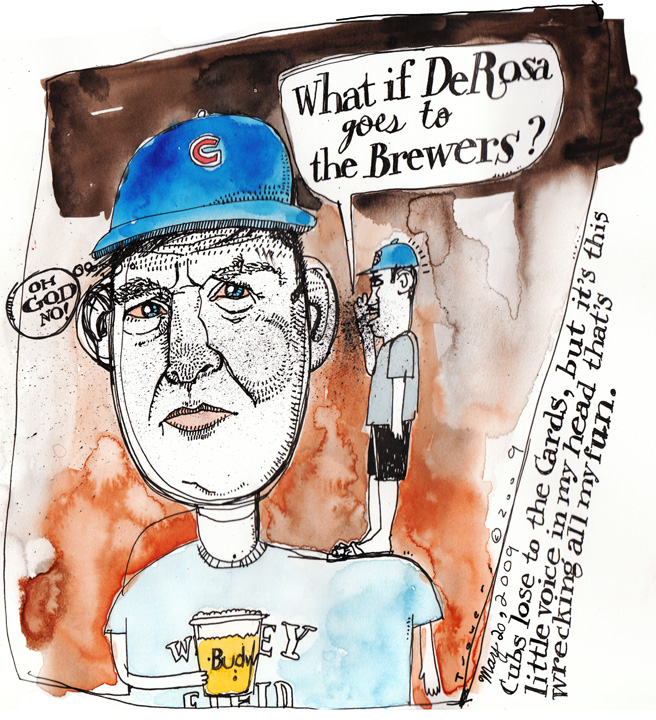 This gif was from when he was trade bait. Remember how everybody wanted him?
He went to the Indians.

Then, when he got traded from the Indians to the Cardinals.

Here as a Cardinal. 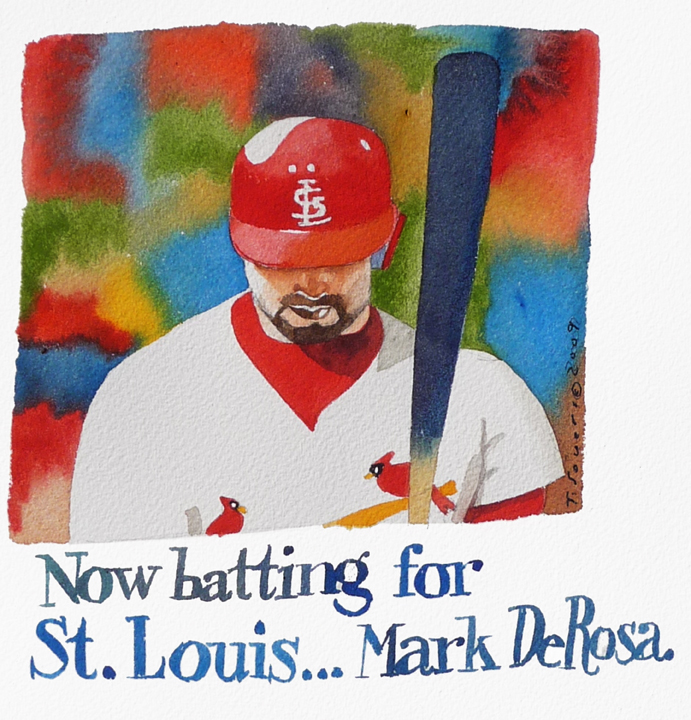 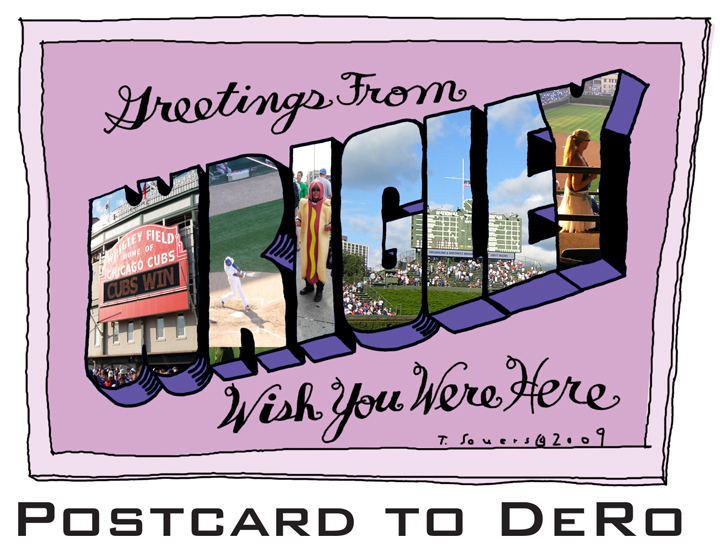 And finally, how I want to remember him, on the way to the playoffs in '08. 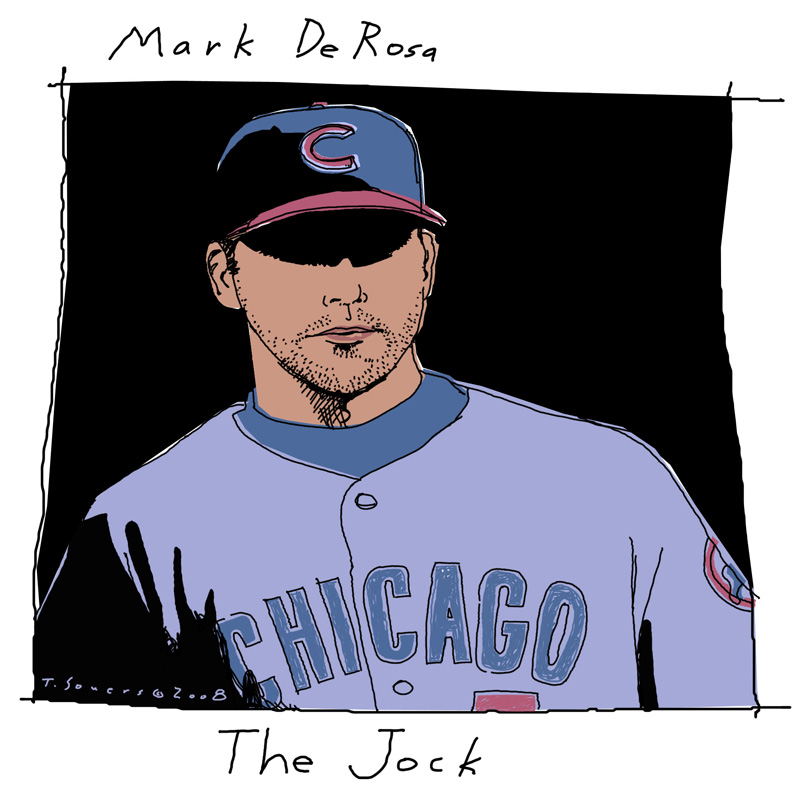 Read about Kris Bryant and see what happens to you, Cub Fan. (gif)

I can't write this stuff.
I'm not a reporter or some kinda pro guy with access to players or scouts.
I'm a simple cave man Cub Fan, so all I can do is try to show what it feels like.
Like after reading about Kris Bryant.
I went from comments on The Cub Reporter, which led me to a story on Bleacher Nation, which led me to the root of it all at Fan Graphs.
Kris Bryant is making me all woozy and I've never once seen him even swing a bat.
Read those numbers.
Read about what his approach to hitting.
Buddy, if that's the Cubs Way, then I'm all... okay well I was already all in, but this Kris Bryant stuff just makes it more "in" or something.

LIke...
It was my Dad's birthday this last weekend, so we flew out to Arizona to surprise him.
On the way to Prescott, we got hungry for lunch and saw this sort of cowboy lookin' place off the highway called the Rock Springs Cafe.
It had a big sign that said "saloon" out front, so I was all in. 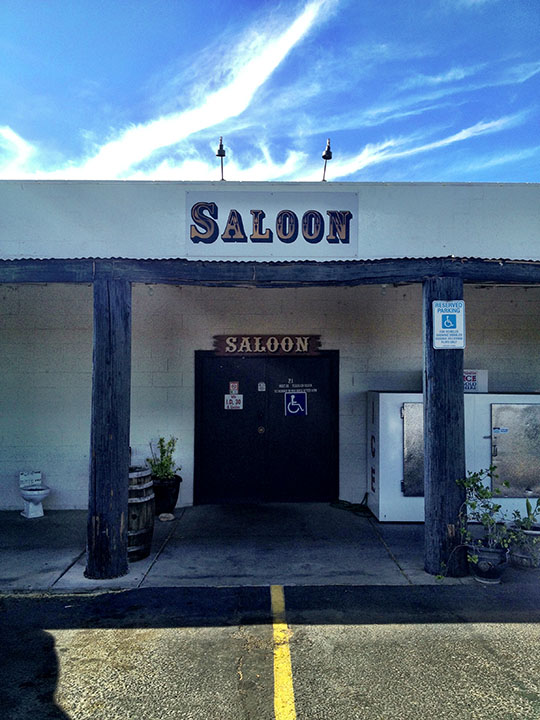 But THEN, I saw another sign that said this:

THEY HAVE PIE?
I'm even more in.

So, today's lesson is that Kris Bryant is like.. the pie... at the Cubs Way Saloon.
Class dismissed.

Seriously, they had pie.
Like every kind of pie you can imagine.
If you're ever north of Phoenix, you gotta stop.

Bears' clean up crew had to clean up all the points left on the field. (cartoon) 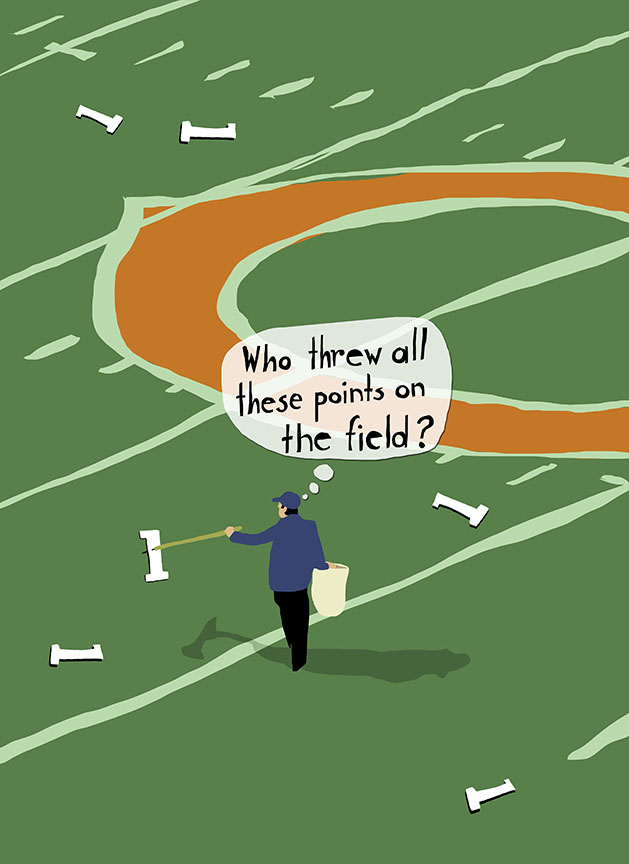 No time for a depressing recap today.
But you probably saw the same thing I did.
They shoulda won, man.