Fun with the Rooftop Owners.

One time I took in a game in Anaheim up in their cheap seats, which weren't really cheap.
I bet they're about the same distance the rooftop seats are, and you need binocs to see the batter.
Any boob that wants to pay to go watch a game from the next block, I don't care.
But what I do care about is the Cubs.
I care about their ability to win a series.
They want to put up the scoreboard, and that will bring in millions of dollars annually to be spent on the team.
And these rooftop guys holding up the construction of the scoreboard is really annoying.
The Cubs have the city of Chicago's blessing to build.
Tom Ricketts has said he won't do it til he gets a signed statement from the rooftop people that says they won't sue.
Hey man, it's Chicago politics and as usual it's kind of a mess.
But you don't need to be in some smoke-filled backroom meeting to conclude that our favorite team might sign some decent pitching with the money from the scoreboard.

Lastly, Ted Lilly retired.
Ted if you read this I would like to thank you for the years of hard assed joy you brought to us Cub Fans.
And now I hope you and your family can move to the next phase of your lives together and be happy.

Lastly lastly, you know my inner Beavis and Butthead won't let me pass up a chance to do a boner joke.
You shoulda seen the drawing that I mercifully cut out... 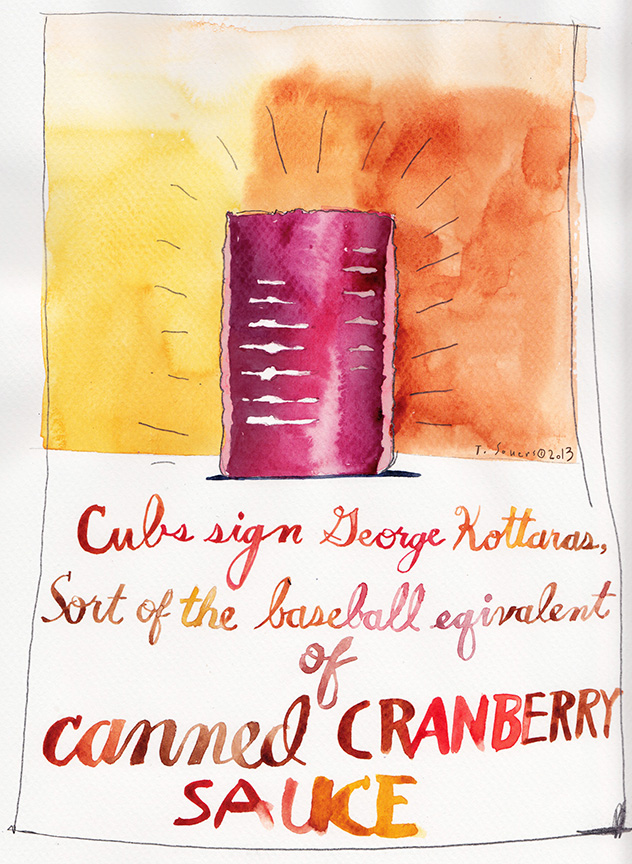 The Cubs won't get into trying to sign last year's unexpectedly awesome backup catcher Dioner Navarro.
But they need somebody to back up Welington Castillo, so they signed George Kottoras.
Here's what it says on Cubs.com: "Kottaras, 30, was the Royals' backup catcher last season after he was claimed off waivers from the Athletics in January. He started 29 games and hit .180 with four doubles, five home runs and 12 RBIs. Kottaras' .349 on-base percentage was sixth-highest among American League catchers."
The last line is the most awesome, but it could have been better, right?
Like, "Kottaras' .349 on-base percentage was tops among American League catchers who started 29 games in '12."

I don't know.
Maybe he'll be like unexpectedly awesome Donny Murphy and hit some unexpected dingers, because Kottaras is supposed to at least have a little pop.
But right now, the day before Thanksgiving, this signing is like canned cranberry sauce.
Right off the shelf, probably about 2 bucks.

Hey what are you gonna do - root for the Cardinals?
Didn't think so.
You're stuck just like me.

One day.
One day, my friend, the Cubs are gonna need to sign a backup catcher and it'll actually mean something to us, and we'll care about it, and we'll dissect his stats and argue about who coulda been better.
But right now?
You can't see me, but I'm shrugging.

Got a big day tomorrow so if I don't post, please have yourself the BEST Thanksgiving and while we're on that subject... at least they didn't bring back Koyie!
THANK YOU CUBS!

Blackhawks' Johnny Oduya and the pain of the Blocked Shot. (gif)

Did you see that blocked shot by Johnny Oduya last night?
Probably he had a couple - but this one was called out because A) he couldn't get up and B) either Pat Foley or Eddie Olczyk said it was his 50th blocked shot.
When I think about a little piece of rock-hard rubber rocketing off the stick of Anton Belov at whatever mph he can hit a slapshot, and it in turn hits Johnny Oduya so hard that he just... can't get up... all my nerve endings thought they were getting a root canal.
All I was doing was watching.
Maybe the puck went between some pads.
Maybe it's like wherever it hit was like a funny bone because the impact was so great.
I hit my funny bone the other day.
I made the "ow ow ow ow ow" noise while my whole arm went all petroleum jelly and burst into flame.
Anyway, then they showed a replay, and then (seemed like a minute went by), Oduya is back on the ice again.
That's just kind of different than me.
You too, I bet.

He also scored a goal, and the Blackhawks beat the Oilers 5-1.
Patrick Kane had one too so he's scored a point in 11 straight games.
And Andrew Shaw of Stanley Cup puck to the face fame had 2 goals.
Pretty cool all the way around.

The headline for the Cubs is they hired Bill Mueller as their hitting coach.
But that happened days ago.
Big trades have been happening, most notably the Cards signing admitted and penalty paid ped offender Jhonny Peralta.
To play short and take Pete Kozma's place, who wasn't very good.
They spent money, too.
Like $52 mil for 4 years.
He'll be 32 next May, so you know, 36 in his final year.
The Cards don't care, though.
They wanna win the World Series next year and maybe Peralta's the piece.
Or maybe it's that new center fielder Peter Bourjos they got in a trade with the Angels for David Freese.

Lots of chatter about the Peralta signing.
Ped guy, gets a big raise, obviously the Cardinals didn't think the peds were the reason Peralta was any good, but is it good for baseball?
Well he did the time, so I don't get the uproar.
If it helps change the rules so that ped offenders get stiffer penalties in the future, then great.

Otherwise, I'm just trying to not have any kind of Other Teams Are Trading To Win The Series Envy.
You know?

Dallas Beeler made the Cubs 40-man. Video from 2012 Cubs Convention.

Yeah, I know it's old news, but...
Dallas Beeler and Arismendy Alcantara were added to the Cubs 40 man roster last week.
Alcantara is the bigger name, of course.
Here's what Baseball Perspectus (I think you have to have a subscription to read) has to say about his season: "Not only did Alcantara survive the Double-A test in 2013, he flourished—hitting .271 with 15 homers and 31 steals. On top of that, he cranked a homer off Anthony Ranaudo in the Futures Game, putting an exclamation point on a great season. Alcantara’s biggest obstacle in 2014 may be the fact that he could be competing with Javier Baez for a shot to play 2B on the North Side."

Beeler was the starter for the Mesa Solar Sox in the Arizona Fall League championship game - went 5 innings and gave up just 2 hits and 1 run (the Surprise Saguaros won 2-0).
He was picked in the 41st round back in the 2010 First-Year player draft.
I went to the Cubs Convention last year and watched Beeler, Matt Szczur, Robert Whitenack and Tony Zych do a question/answer thing with Garry Meier.

Here, they must have had some kind of meeting with Mark Prior, and the question you hear (incompletely) is basically, what was Prior's message to you youngsters?
Kind of an expected answer.
All these kids seemed to already have been coached on how to be interviewed, and they were pretty impressive (it's not easy talking into a mic in front of a roomful of people, I promise you).
But the funny quote was one I missed with the camera.
Meier asked the guys what their goals were, and each guy came back with a very logical answer, but they were all kind of pointed at their shortcomings.
I think Szczur might have said something like, "Learn to work the count better."
The others were all pitchers so they were working on a 4th pitch, trying to gain velocity...
Stuff like that.
But Beeler goes, "I wanna be a Hall of Famer."
Totally cracked everybody up, and I'll always remember him for it if he makes it as a Cub or not.

On a personal note, I GOT A NEW GRILL!
A way-early b-day present.
Wife goes (she's all sad lookin'): "Somebody hit my car last night. Can you come look at it?"
So of course I'm all mad and throw on a jacket and mope on out to the car.
"It's the back gate." she says.
I go to the back of the car, she opens it up.
I'm looking at a new grill in the back of the minivan, but it totally doesn't register.
"Why did she open the door if there's a big dent somewhere?" is what I'm thinking.
She has to point to it and actually say, "Happy early birthday" before I get it.

Oh man I can't wait to break it in tonight. 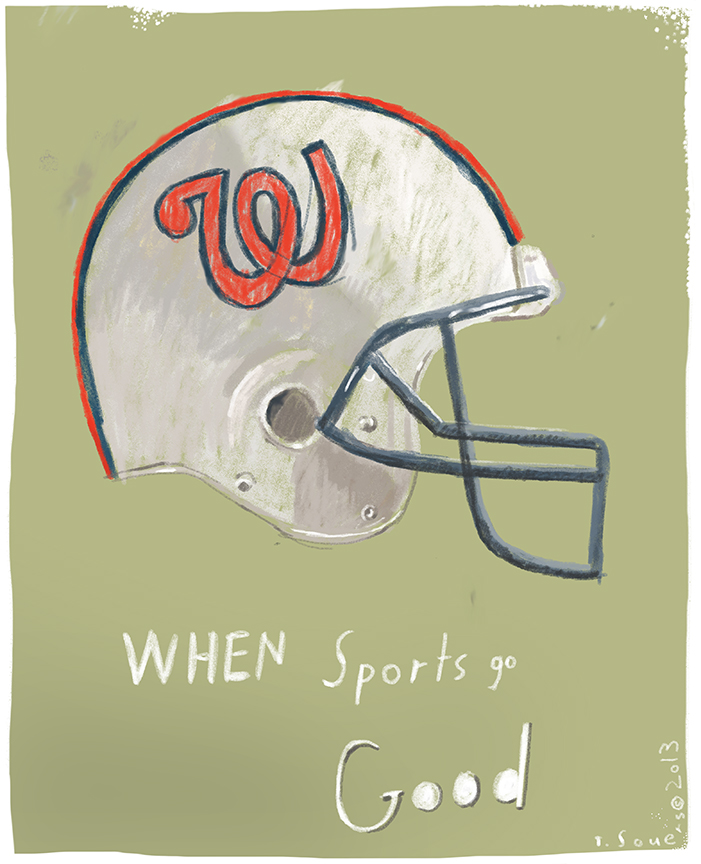 I don't really know what to write here.
This is the kind of stuff where, you know, it's kind of emotional.
Washington, Illinois.
Tiny town.
Ripped to shreds by a tornado.
People from the town rally behind a high school football team.
And it's not a movie.
One is tempted to talk about this situation versus blank.
Like, what's going on in Washington, IL versus what's going on with Alex Rodriguez.
I'm sure you'll read stories with that kind of agenda.
But that's a selfish way to go.
We have an opportunity to witness from afar something that's really cool and touching and rare nowadays when it comes to sports.
The Washington Panthers are going to play the Sacred Heart-Griffin Cyclones.
And everybody down there can forget about the wreckage for a little bit.

Chicago Cub Ernie Banks gets the Medal of Freedom. (illustration) 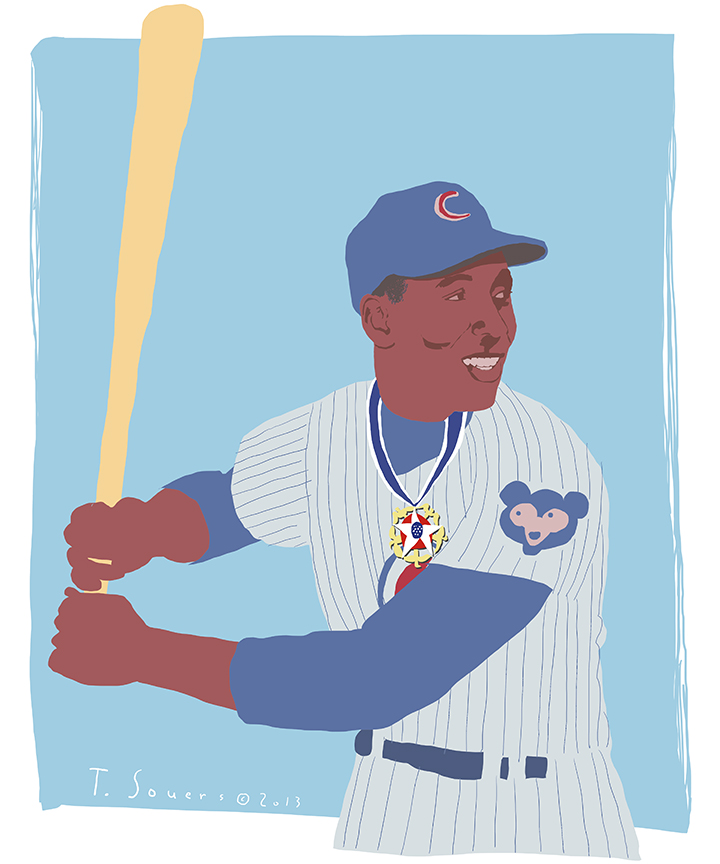 That's kind of amazing.
It's a week chock full of history that's way more important than the Cubs, with the 50th anniversary of John F. Kennedy's assasination coming tomorrow.
And yesterday our own Ernie Banks got the Medal of Freedom along with fellow Chicagoan Oprah Winfrey from fellow Chicagoan Barrack Obama.
Other people won, too, but this is a Cubs blog so I'll leave it at that.
It says here that the Medal of Freedom is: "...the nation's highest civilian award, recognizes exceptional meritorious service. The medal was established by President Truman in 1945 to recognize notable service in the war. In 1963, President Kennedy reintroduced it as an honor for distinguished civilian service in peacetime."
You know, over in England they still knight people.
That totally sounds governmental or military or something, but it happens to regular people who are outstanding in their own field.
Like...Anthony Hopkins got knighted by Queen Elizabeth II.
So he gets to be "Sir Anthony Hopkins" instead of just "Actor Anthony Hopkins".
And if Anthony Hopkins can get knighted for playing Hannibal Lecter, it only makes sense that Ernie Banks can get the Medal of Freedom for playing short and first for the Cubs.
I do find it kind of odd that the most famous Cub of all time wins a medal called "Freedom", while you and I still wait for the World Series that will set us free, but whatever.
It was Ernie's day to shine, not mine to whine.
(I did that on purpose with the rhyme, kinda like Ernie might).