Man it's rough being a Cub Fan lately. 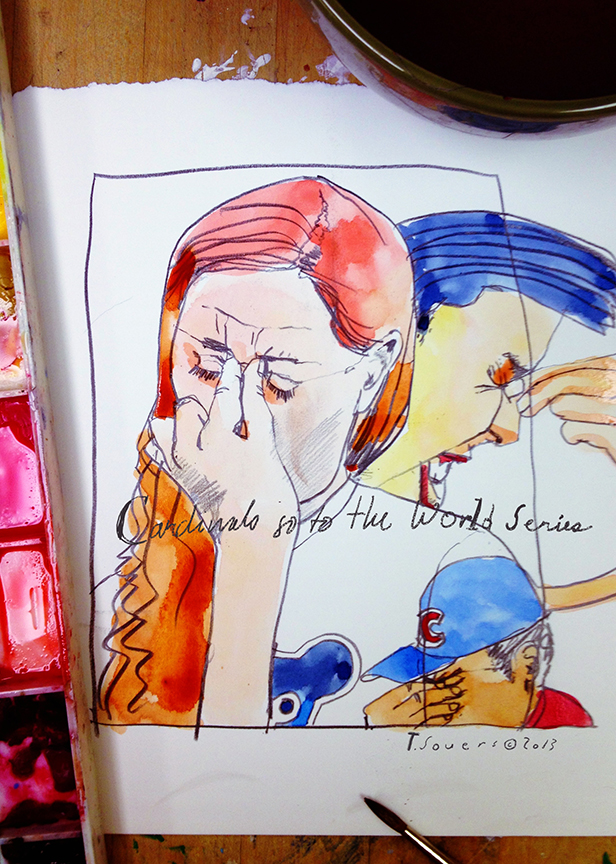 Wel...I guess I'm pretty happy that the biggest spenders didn't get to buy a World Series.

But otherwise last night couldn't have sucked more.
How many times must I watch the Cardinals pour champagne on each other?
And here's the thing about being a Cub fan right now.
I mean, you've listened to sports radio, right?
There are like millions of REALLY pissed off Cub fans who, well I just think they haven't paid any attention at all to what's going on with Theo and Jed and the Cubs Way.
The same people who were really mad when the Cubs traded Paul Maholm, you know?
Mad that the Cubs weren't trying to make a run at a title with so little talent...
So you could be one of those people and just be angry all the time.

Or you can be totally aware of everything, know about the re-structuring, the effort being put into young talent, but still think well DAMMIT! This is a major market team with some money - they should be doing this rebuilding while still buying big time players so the Cubs can make a run at the Cardinals.
Even after watching what just happened to the Dodgers, who spent $216,597,577 on their team and still lose.
(Gross oversimplification, but it's Saturday and I gotta work.)
You can be that kind of Cub Fan and be mad and depressed all the time.

Or choice number 3 is you can be totally aware of the re-structuring and just be depressed.
Not because the re-structuring is the wrong thing to do - you know it's absolutely right, but you also know the Cubs are still years away.
Look at that team from St. Louis.
And all that home-grown talent.
At the beginning of this season, that team's salary was about $10 mil more than the Cubs.
They lost their best starting pitcher and their closer at the beginning of the season and other guys stepped in and the team never missed a beat.
I WANT A TEAM LIKE THAT!
I got a text from Sutter last night that basically said the Cubs are still generations from being able to compete with the Cardinals no matter how many bi-lingual managers they hire.

Man, it is just really tough being a Cub Fan right now.

Isn't it about time for a Matt Holliday game-changing error or something?

Matt Holliday has kind of a rich history of non-elegance during playoff time.
Sure you could say well, at least he's been IN the playoffs but whatever - I choose to just point these plays out and hope with all my might that he lays another one... 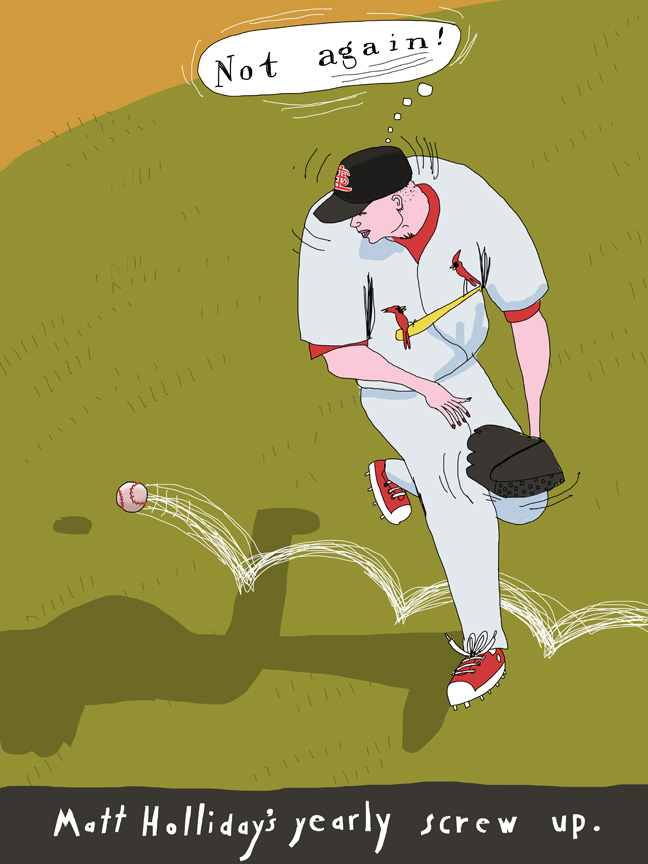 From last year - this was the awesome misplay of Marco Scutaro's single that went between Matt Holliday's legs. In the first inning of this game, Holliday had a sort of "over-anxious" slide into Scutaro if you recall, so it was baseball karma, kinda. 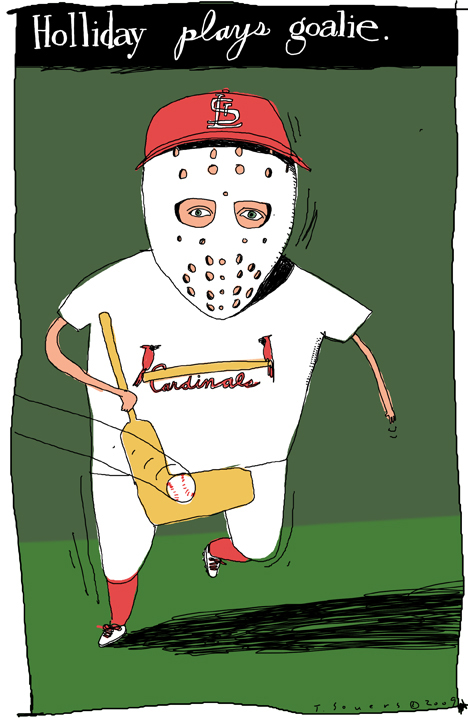 This was from game 2 of the 2009 NLDS, Cards vs Dodgers where Holliday "lost" James Loney's liner to left, and it hit him in the stomach or chest. It looked to me like he blocked it like a goalie. Dodgers 3 Cardinals 2.
Dodgers go on to sweep the Cards. 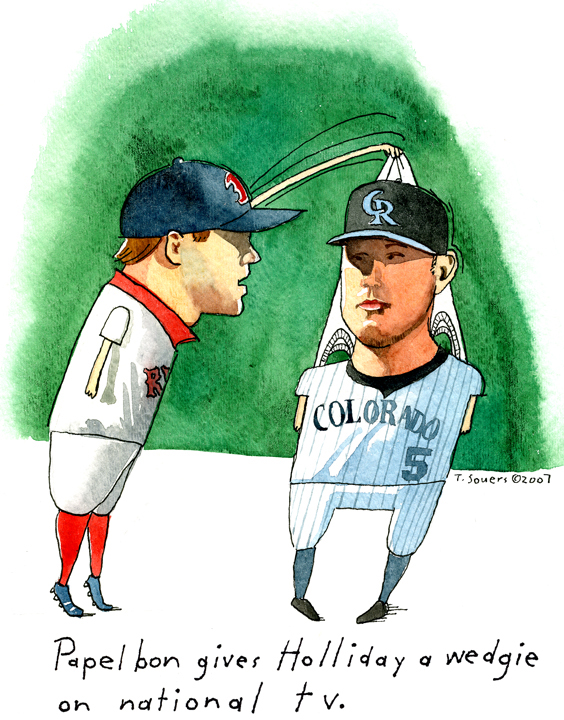 And I think Matt has the distinction of being the subject of my first wedgie painting, back when he was with Colorado back in 2007. Holliday got picked off by Boston's Jonathan Papelbon.

By the way, if Holliday should actually perform as I hope, I would gladly take suggestions for the next illustration. Wedgie, obviously, has been taken. 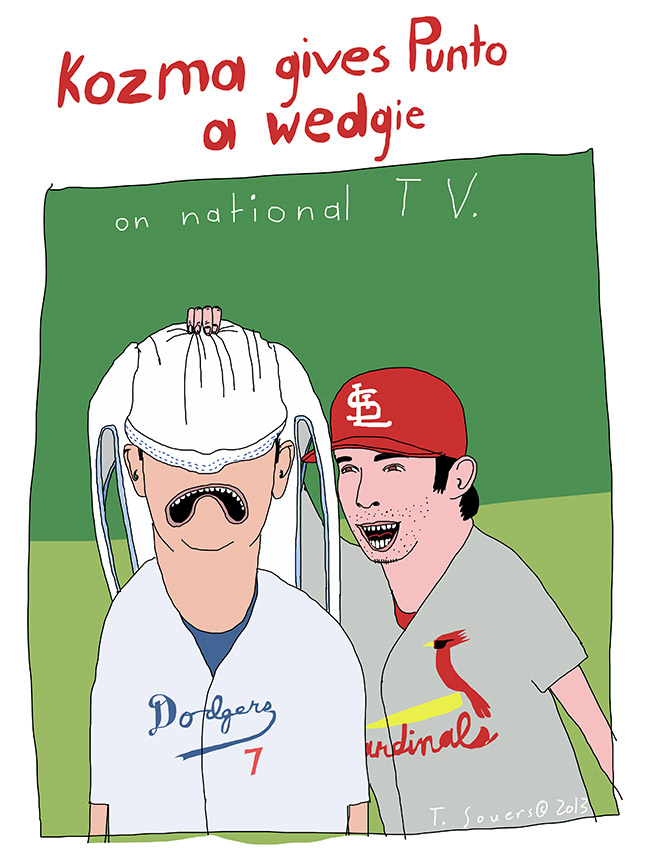 I so look forward to this.
EVERY year, somebody gets caught off base in the playoffs.
In front of their family, their fans.
In front of the entire country.
It has to be the most embarrassing thing.
Last night it was Nick Punto, heroically smacking a dramatic double in the bottom of the 7th with the Dodgers down 2.
The crowd goes wild, as they say, because the Dodgers need baserunners.
And then, like a red and off-white colored cat's shadow, St. Louis ss Pete Kozma sneaks in behind Punto, pitcher Carlos Martinez throws to Kozma and poof: Nick Punto's underwear comes flying out his pants and stretches all the way across his forehead.I
It's a full blown wedgie for the entire country to see.
All the air goes outta the Dodger's balloon, and pretty soon they leave as losers in their own park.
All hundred billion dollars worth (or whatever the Dodgers are).
Well, can't stand either team, but I love wedgie time in the playoffs.

It's the 10th anniversary of that one 2003 game that happened at Wrigley Field. 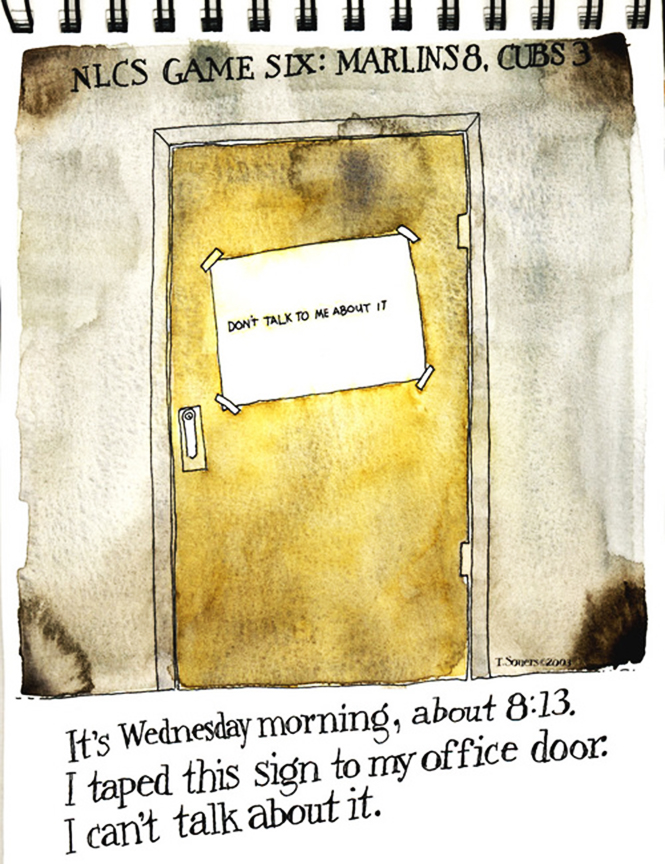 I painted this on Wednesday, October 15th, 2003.
And today I've elected to feel the same way. 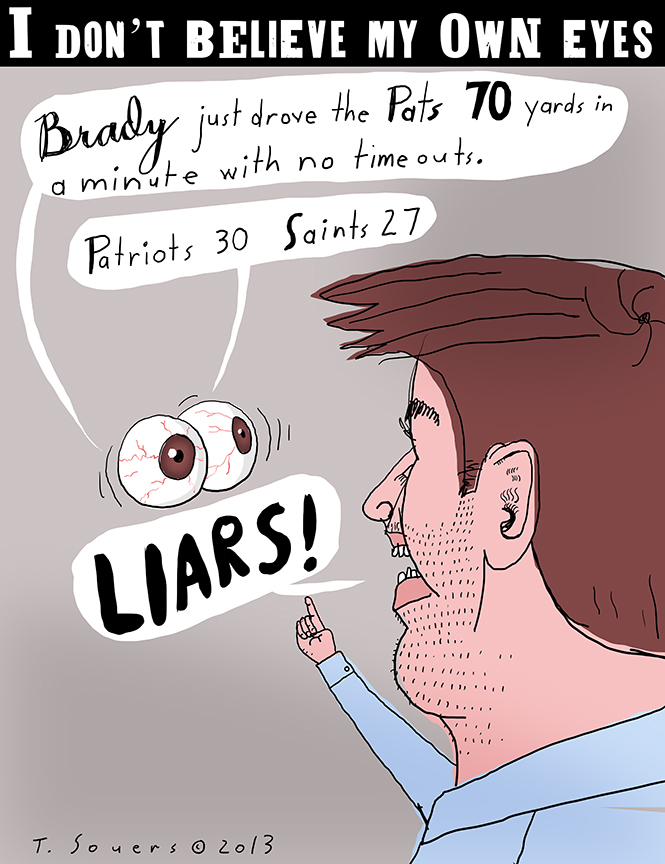 Hope you were watching.
That was IMPOSSIBLE! 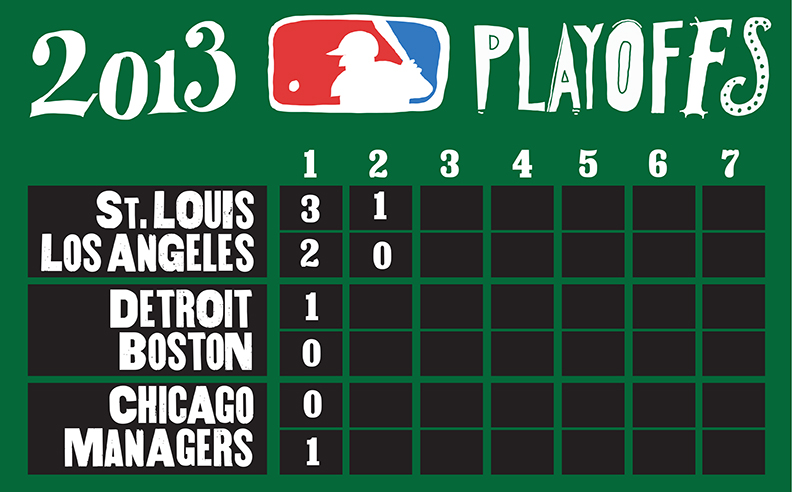 Yeah, there's alot of good baseball being played right now, but the score I care about most is the Chicago vs Managers one.
The next Cubs manager job is a hole that needs to be filled, and the fact that we're talking about it is just dumb.
I mean, if you knew you were gonna get rid of the manager, wouldn't you have a number if ideas ready?

On the other hand, it's the Cubs.
And there's a long, colorful history of messing with managers.
Maybe they're gonna hire Hal from "2001 A Space Oddysey".

Anyway, the clock's ticking and there's work to be done, so they need to hire a new manager soon.
It's a shame they didn't get Joe Girardi, but it's not the end of the world.
They'll probably give somebody a short term contract and keep growing kids.
Tell you what's going to matter more.
In the Theo Epstein Timeline of World Series Relevance, they're not even to the 7th inning stretch.
Right?
I think we all agree that the ML team from the north side ought to be better next year, but they ain't going to the playoffs.
In 2016 our expectations should be higher, but they'll still be very very young.
So it's still a couple years til all that's been started can perhaps come to actual fruition.
The next Cubs manager?
I don't know.
Had they gotten Girardi I'd expect him to be the manager in 2016.
But since they didn't, I just...have my doubts that the next guy they hire will be the guy at the helm in 2016.

And now, looking at my choices of Tigers, Dodgers, Cardinals and Red Sox... I mean, nothing can ever be worse than Astros vs the White Sox, but there just isn't a whole lot of fun selections here for your basic Cubs Fan.

Lastly, it's going to continue to be insanely busy.
So please forgive me if I fall behind.